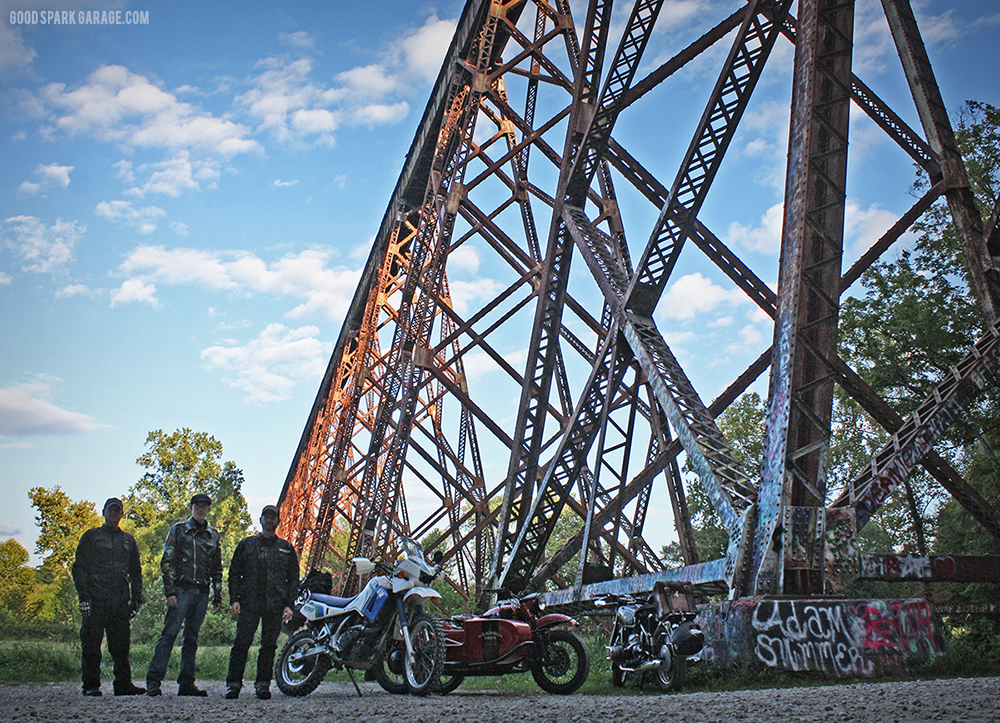 Tulip Trestle is the world’s third-longest railroad viaduct and the longest rail trestle in the USA. We discovered it by accident when looking for good riding roads on Google Maps. Looking down from the sky, we saw its huge shadow cast out over one section of railroad. Once we looked into its history, we had to take the 100-mile trip to go see it; here’s our ride report…

This was a road trip taken and recorded by Wilkinson Bros along with their good friend and colleague, Chris Sickels of Red Nose Studio.

We charted a route through some great country roads on the way to the trestle, which is located between the towns of Solsberry and Tulip, Indiana. During our jaunt from Central to Southern Indiana, we crossed over or under the same railroad tracks more than 10 times, passing lakes, forests and farms on gravel roads and broken pavement. 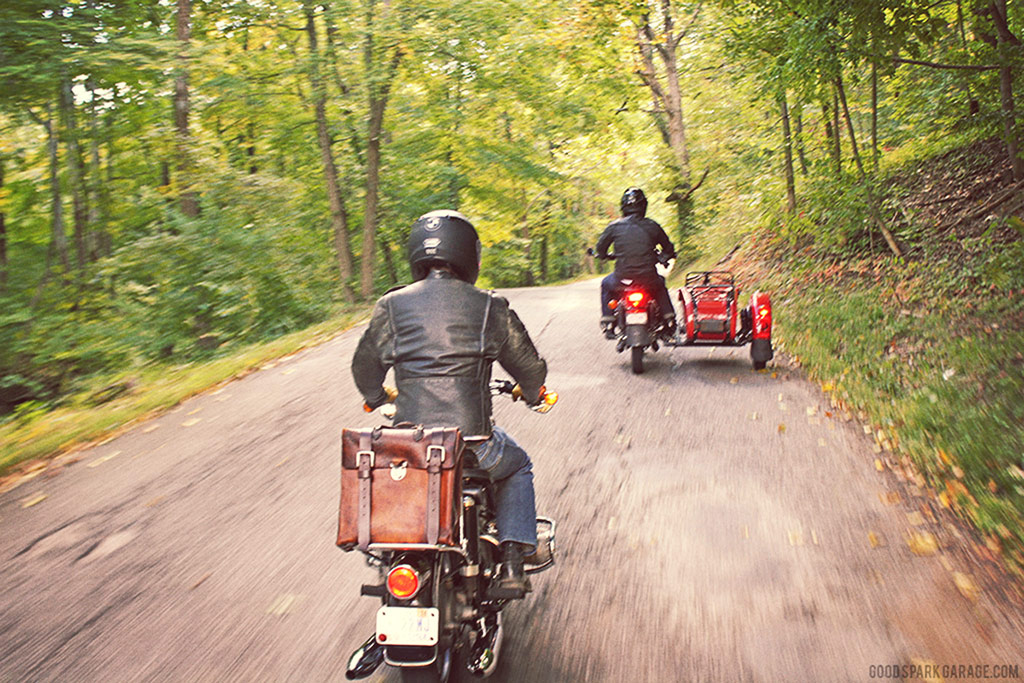 Casey rode his 1987 Kawasaki KLR 650, Chris rode his 1966 BMW R60/2 and Corey rode the 2010 Ural Red October. State Road 45 between Bean Blossom and Bloomington was especially twisty and scenic. We took a few roads that beckoned us off the beaten path including one that led us under another large, steel railroad trestle near Lake Lemon. 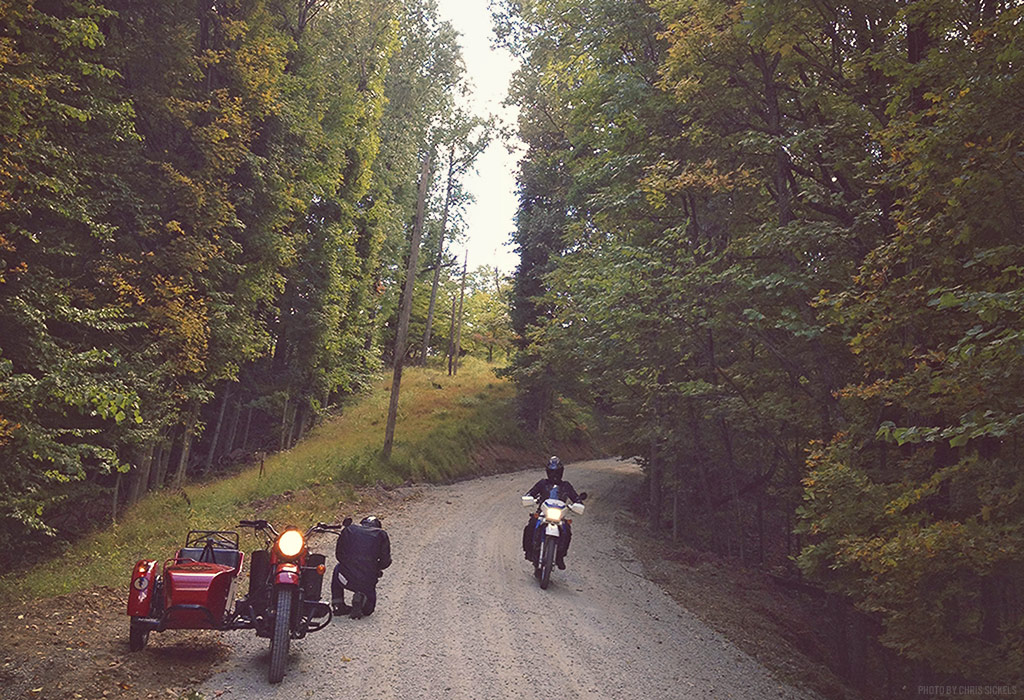 If you’re like us, you often wish you took more pictures during motorcycle travel. The thought is always lingering in our minds. In the pic above, Chris captured Corey filming Casey’s ride-by. While we recommend enjoying your ride more than worrying about stopping, starting and setting up photo shoots, we’re always glad to have photos like this in our moto scrapbook. Moral of the story: Don’t stress about missing Kodak moments, but don’t regret passing up too many opportunities. 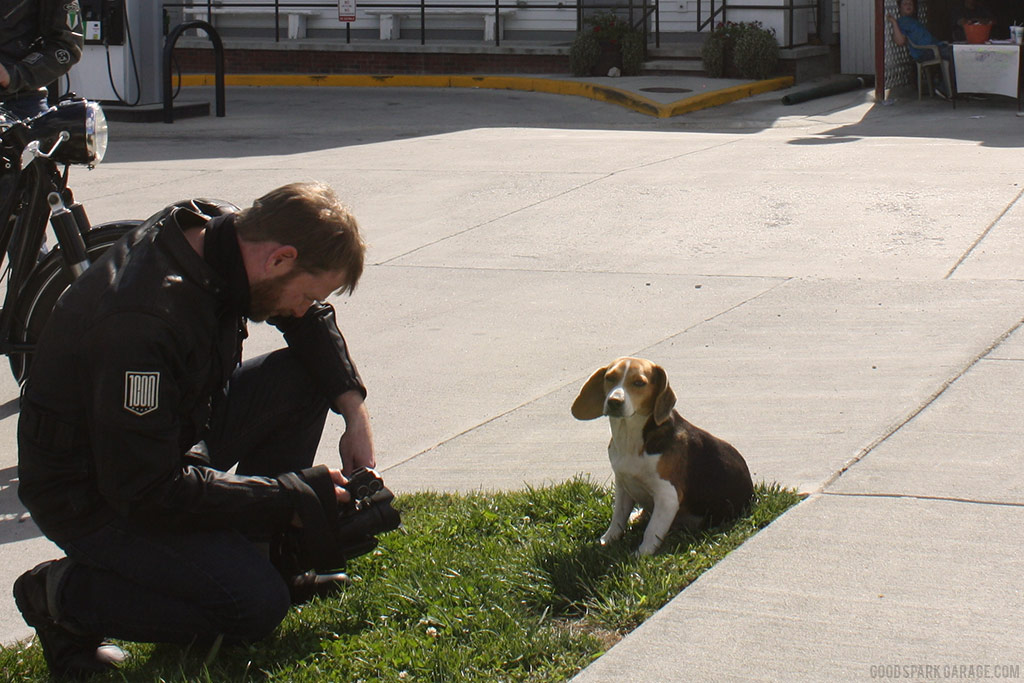 When you ride long enough, you’re sure to encounter small-town burgs with at least one untethered dog roaming the quiet streets like it has a key to the city. We were first-time visitors to the Yoho General Store in Solsberry, IN, and these pups didn’t waste any time greeting us. 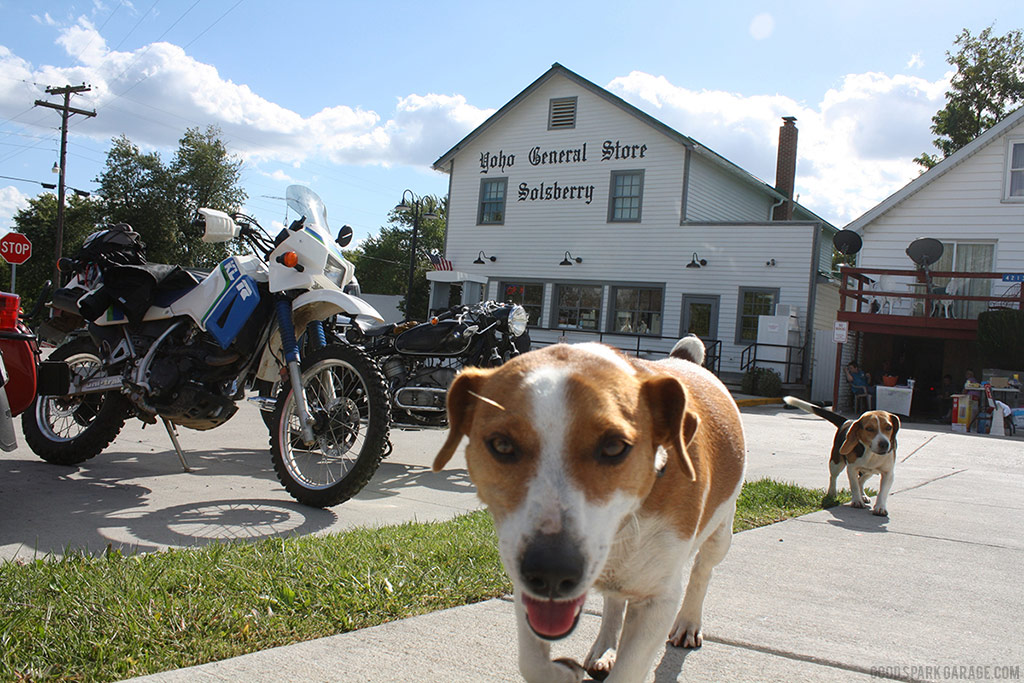 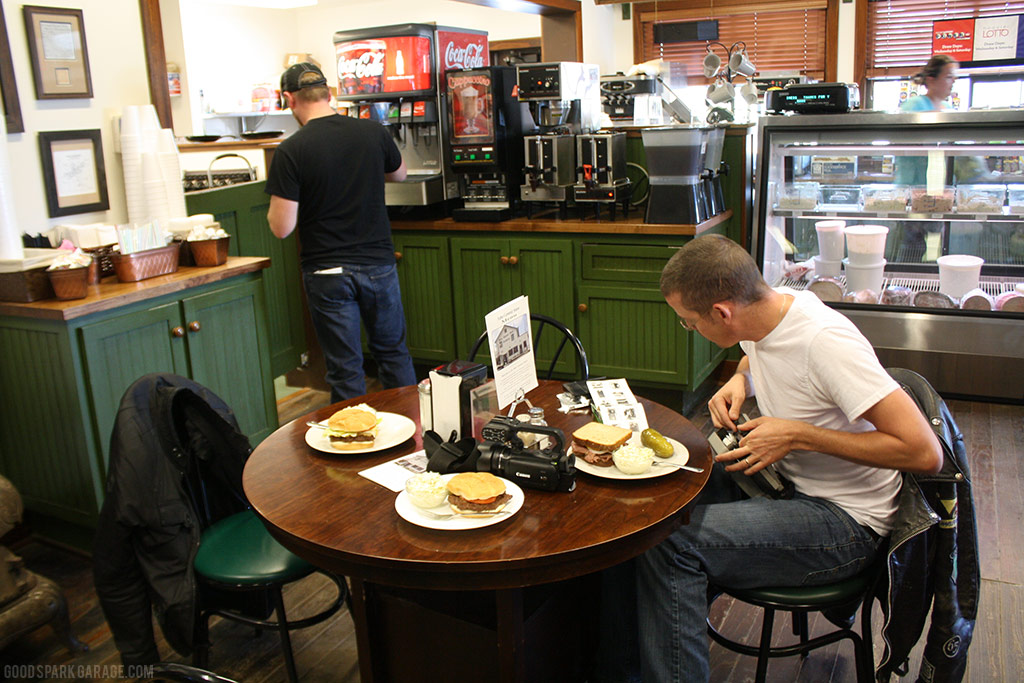 We weren’t surprised to get friendly service and good eatin’ at this restaurant/gas station/convenience store. There are no stuffy uniforms or name tags and the old wooden floor provided pitch-perfect creaking and thunk-thunking as we walked to our table (which sat by the original potbelly stove). Read an article about the Yoho General Store here. 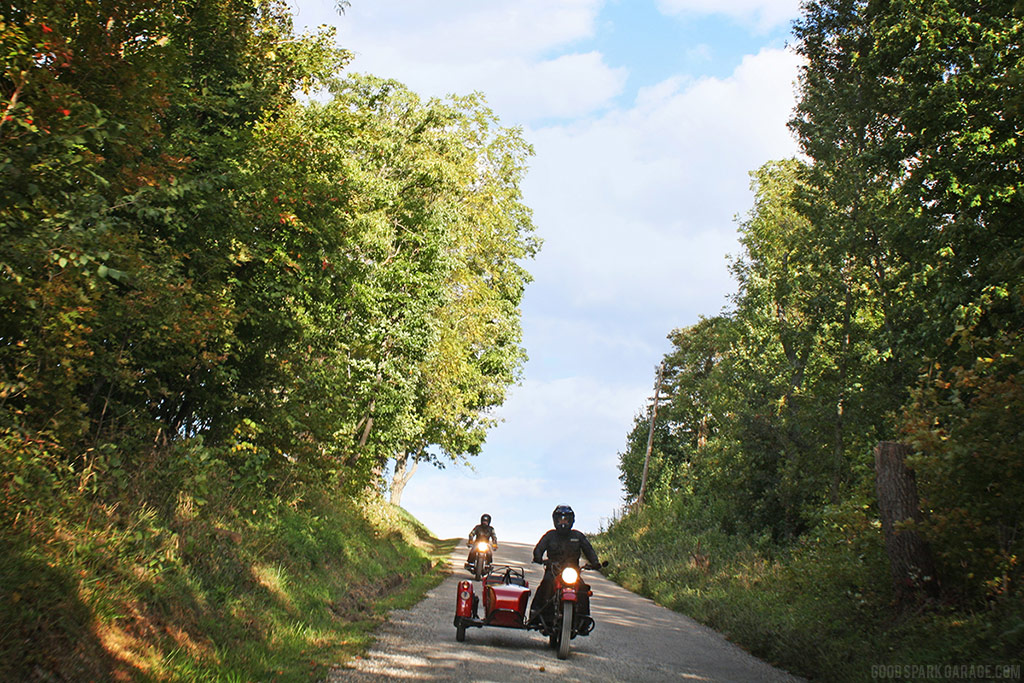 The above view from Casey’s KLR650 shows how the terrain starts to fall and rise leading up to Tulip Trestle, which spans the Richland Creek Valley.

We learned this bridge is known by several different names. We like “Tulip Trestle,” but also acceptable is Richland Creek Viaduct, Tulip Viaduct, Greene County Viaduct and, the more technical label, Bridge X75-6. If we told you it was built in 1905 and 1906 and hasn’t had any major work done to it since then, you might be surprised to hear it’s still used daily by the Indiana Rail Road.

After leaving the Yoho General Store, it isn’t all that easy to find if you’re just winging it. We relied on a few, small, laminated posters tacked to sign posts, that pointed us in the right direction.

The viaduct spans approximately 2300 feet out over Greene County farmland; land that’s still owned by the family whose patriarchs saw it being built. At its highest point, it’s 157 feet tall and, although it once had several walk-outs placed along the sides, it has no railing and is only wide enough for a train to fit. In other words, there ain’t nowhere to go if a train snuck up on you. (FYI: The trains slow way down when crossing.)

We’ve heard some colorful stories from folks who live in the area or who have visited Tulip Trestle. For instance, when the bridge was completed, trains would stop at one end and let locals hop on for a ride across. Steel workers were paid 30¢ an hour, which was considered good pay back then. Several companies worked on the project, some from as far away as Chicago, and people would come watch the laborers while picnicking in the fields nearby.

The total cost to build the viaduct? $246,504. Total weight comes in at almost 6 million pounds (2895 tons). It’s also been recorded that large barrels of water sat on platforms along the viaduct in case of a fire back in the steam locomotive era. While we were standing in one of the gravel areas nearby, an old fella was showing his grandson the bridge. He confided in Chris that he had walked across the entire length of the viaduct, twice, when he was young. 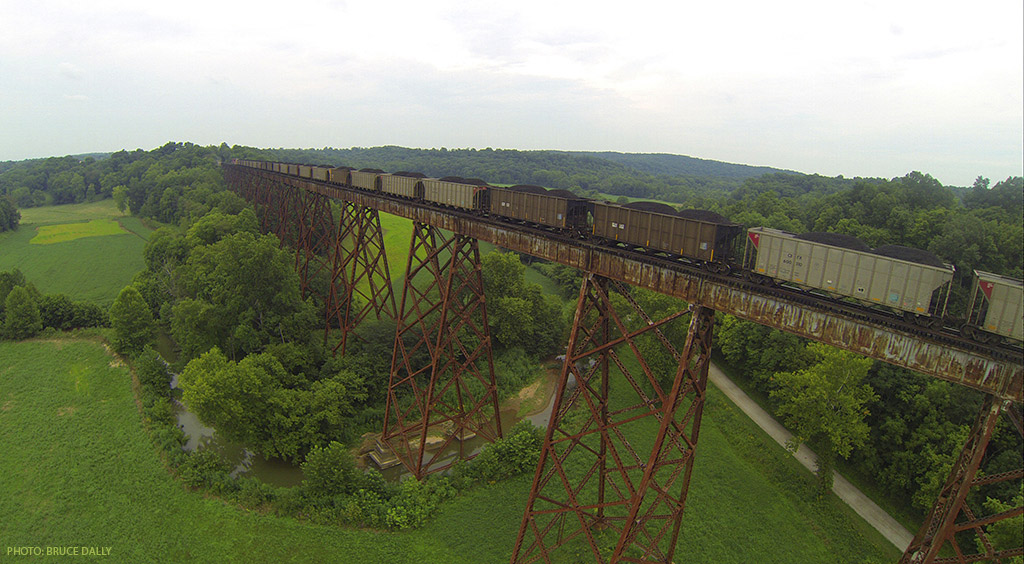 If you’re around the area of Tulip or Solsberry, Indiana, it’s worth a quick trip to see this massive steel structure. There are a couple pull-offs, but keep in mind, the land around and under the trestle is owned by the railroad or is the private property of local farmers. Word on the street is that you’d be trespassing if you wanted a rail-level view of the land. There’s an evident, beat-down trail headed up to the West end of the bridge and we didn’t see any signs thwarting the climb (at the time of this post anyway). Fencing and signs do make their presence known at the top (ahem…so we’ve heard), stating that the book may be thrown at ya if you step out onto the tracks. 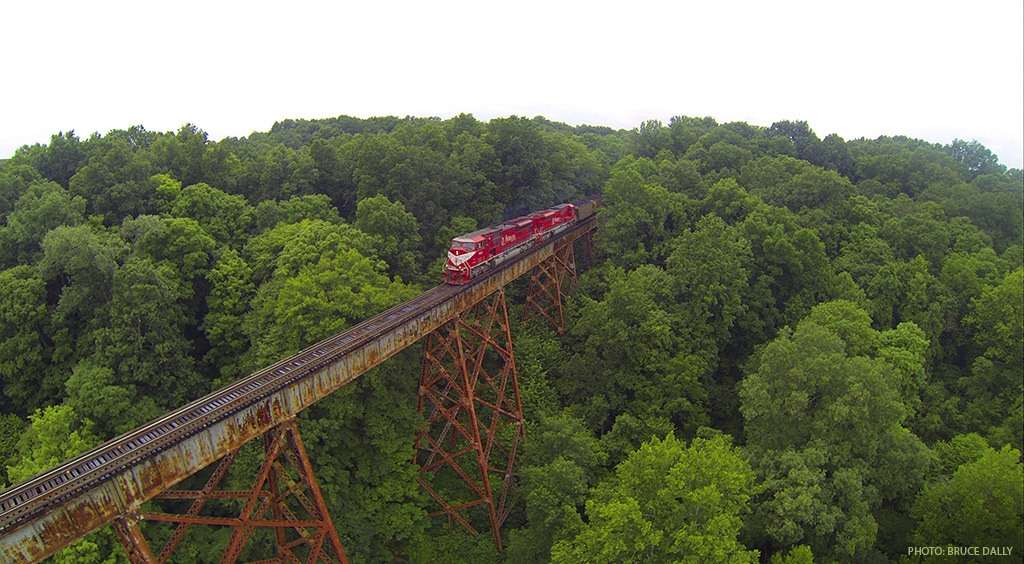 These two aerial photos above were taken by Bruce Dally with his drone/copter cam. See his full video, where he captures a train crossing the picturesque landscape.

Thanks for tuning in to Good Spark Garage and joining us on our travels. If you like what you read, please tell your motorcycle friends so we can share our stories with them as well.

Stay tuned to see where we go next!