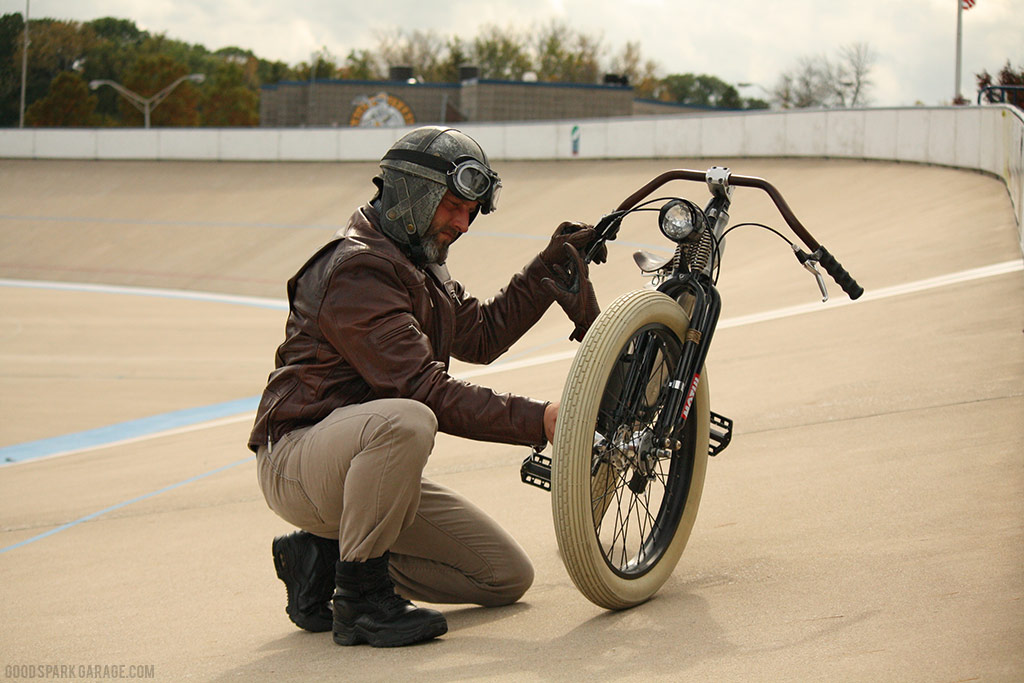 Our motorcycling realm is full of fun opportunities; this last one was a thrill. Matty Bennett of National Moto+Cycle called us out to the Major Taylor Velodrome in Indianapolis to film one of his custom motorbikes lap the 28-degree-banked oval. A bonus opportunity: we ran our Ural sidecar around the pristine concrete drome as a camera vehicle. Keep reading for more pics, video and a behind-the-scenes look…

The National Moto+Cycle brand is steeped in history. Sit down with Matty for several minutes and you’ll realize his stewardship for “National” is more than a marketing exercise; it’s a passion that is met with seriousness and a desire to revive a lifestyle that is “inspired by heritage, fueled by innovation.” 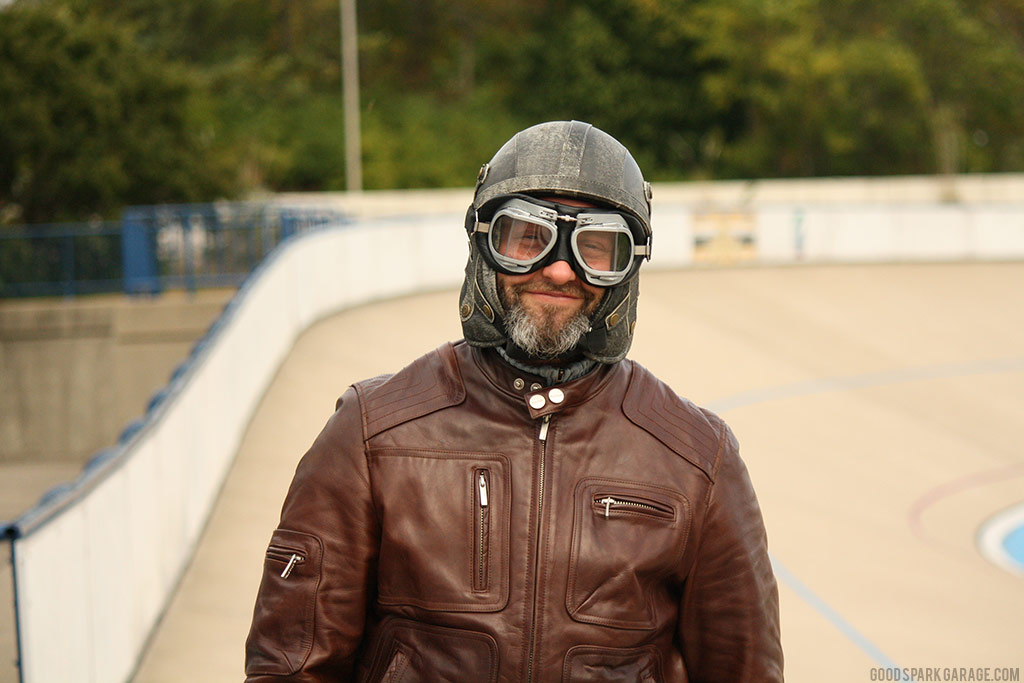 Matty’s effort to promote an early 1900s-style motorized bicycle fleet is prompting smiles and buzz in the motorcycling community. Pair vintage fashion with a modern-made homage to yesteryear and you’ve got one heckuva photogenic mode of transportation. 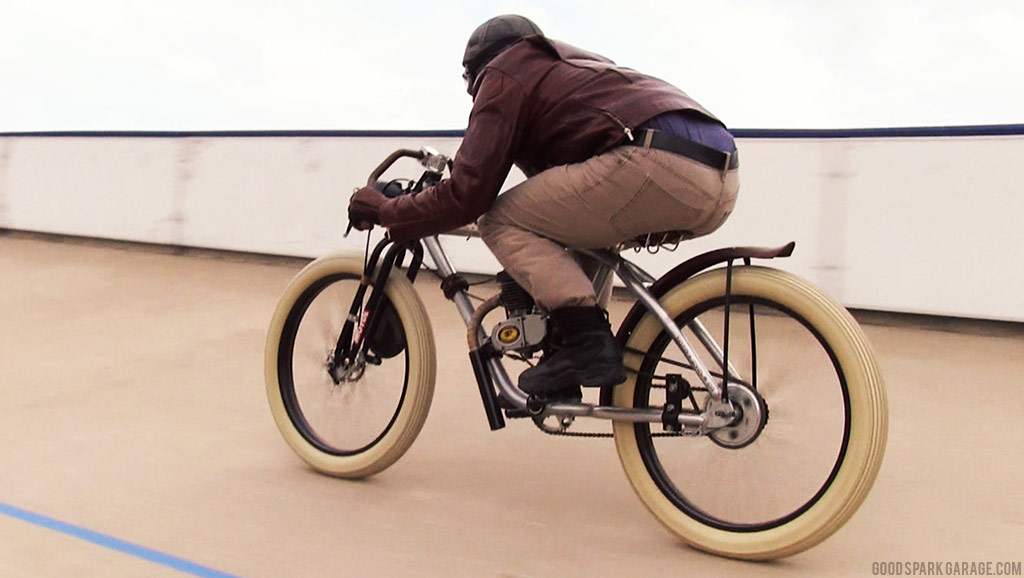 The NMC model being ridden around the track on this day was one of the original designs for the company. Soon, a new ‘squadron’ of these boardtrack motorcycle-inspired bikes will hit the market with multiple options and price points. There will be new, proprietary parts and pieces manufactured right here in the USA, all being assembled into a no-motorcycle-license-required machine that boasts 100mpg at just under 50ccs. 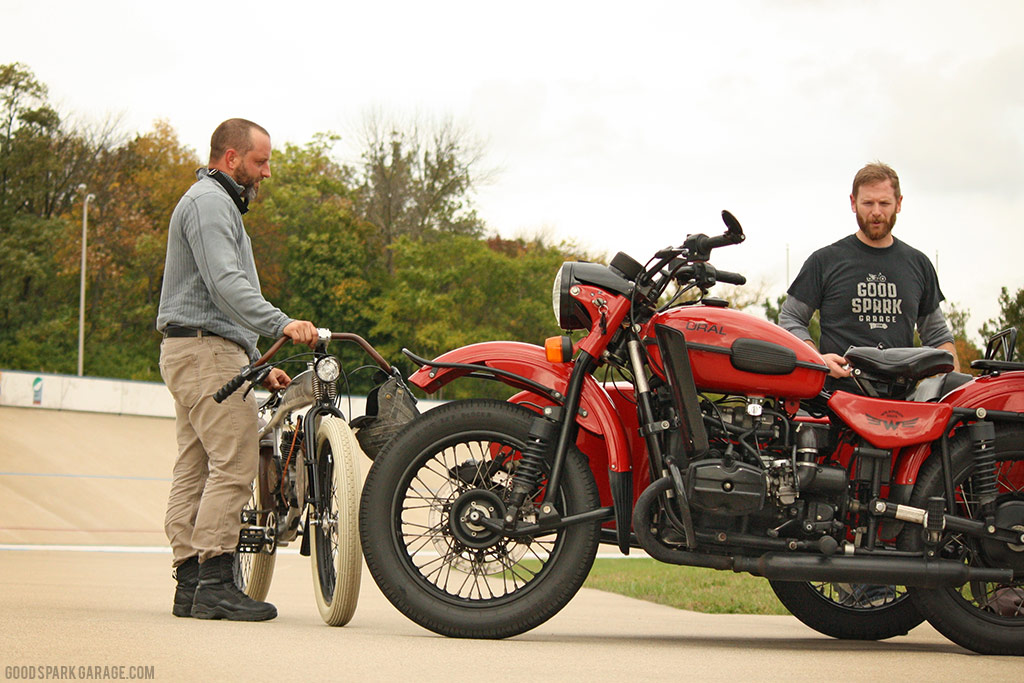 Having followed the same circuit of Midwestern bike shows and vintage gatherings, we’ve seen firsthand how these bikes stop traffic and turn heads. We’re angling for a new model ourselves, so keep it tuned to this space to see what the Wilkinson Bros will do with their very own National (you can be sure there’ll be a video). 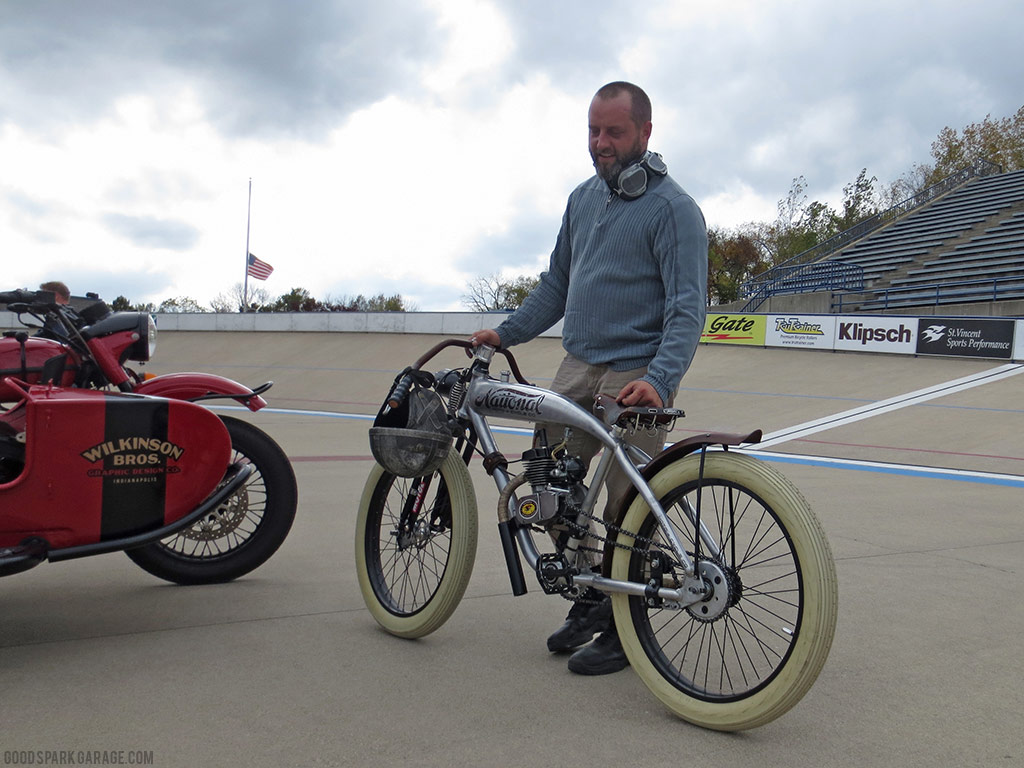 Now, we know there are steeper tracks and men of yore have taken greater risks at higher speeds, but riding the sidecar out there chasing a rigid-reared, mad hornet of a bike was a rush. Letting the banked corners twist you into a gravitational happy place was a treat; it was like getting a first-person glimpse, even if slight, into the days of boardtrack racing and motordrome venues.

For a behind-the-scenes look at our li’l vid we shot for National Moto+Cycle, watch the video below. We ran a few laps around the velodrome to get acclimated, then Casey piloted our Ural sidecar motorcycle while Corey filmed from the hack. Matty Bennett, owner of NMC, was the rider of the 2-stroke, boardtrack-inspired bike.

Stay tuned to NationalMoto.com for their new product line coming soon. We’ll definitely be watching how this Indy-born company will make its mark in the motorcycle industry.

NOTE: If this article has piqued your interest in who Major Taylor was, click here. He was a legend in cycling and an inspiration to many, even beyond the sport. And, if you’re curious about the velodrome featured here, read about the Indy Cycloplex and the good people behind it at this link. We can’t say enough nice things about the hospitality we received at the Marian University-operated complex.

If you find yourself near Indianapolis with a hankerin' for motorcycle goods, stop by City Moto and…