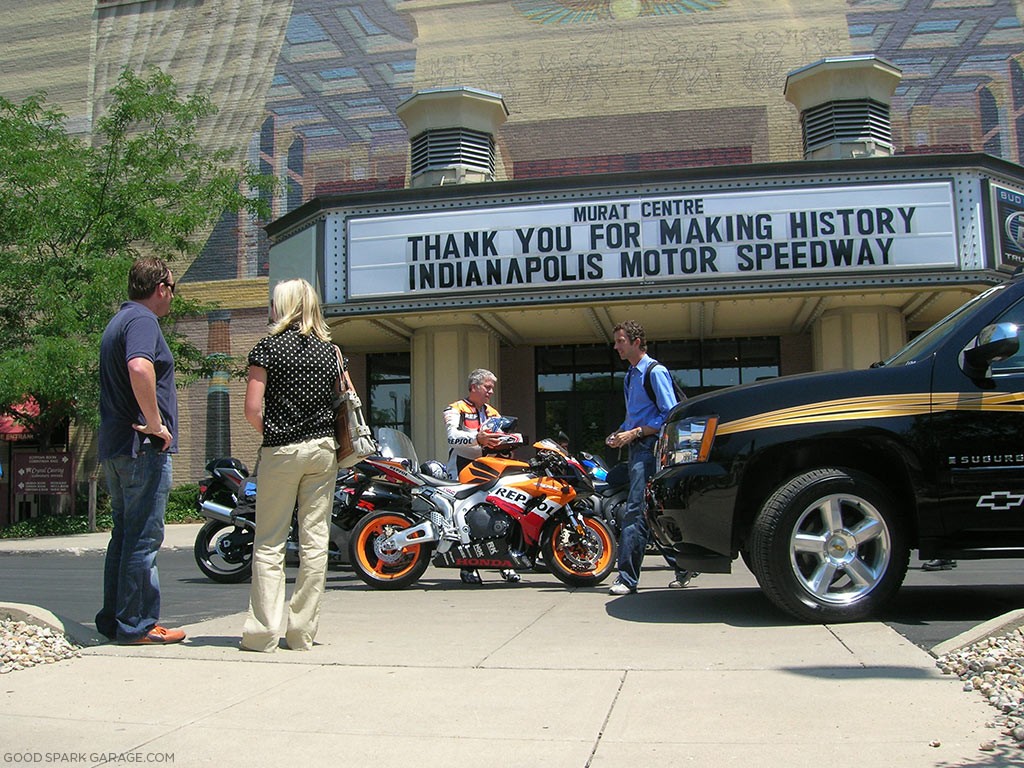 We’re gonna miss MotoGP in Indy. It’s a bummer, for sure, but we’re thankful for its long stay at the Indianapolis Motor Speedway. It also served as a powerful shot in the arm to the Indy motorcycle scene. Here, we’ll sum up why it was so special and why it’ll be missed.

For eight years we enjoyed the lead-up to the big weekend and planned our work-week around the festivities at the historic oval. There were bike shows, street gatherings, stunt competitions, flat track racing, media events, concerts, and more. The Circle City definitely came alive with the sound of motorcycles.

Let’s go back in time for a bit here. Back in 2007, Casey and I signed ourselves up to be among the limited number of riders to attend a rally where IMS would announce that MotoGP was coming to Indy. We feverishly made buttons and stickers for our jackets and bikes, like our sister would have for an NKOTB concert. 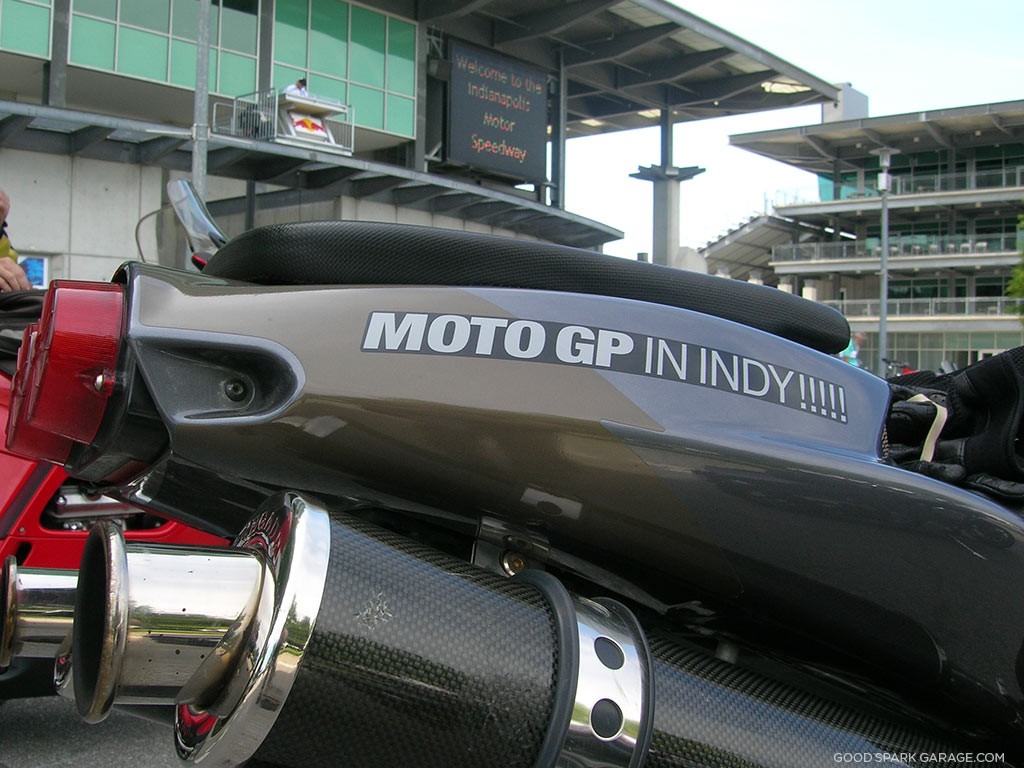 We proudly displayed these shows-of-support for years actually. And we never lost that giddy feeling knowing “our city” was the epicenter for motorcycle fandom in the Midwest (and beyond). The big old oval and its surrounding structures are enough to create excitement, but drop in MotoGP, Moto2, Moto3 and other supplemental racing leagues and you’ve got a happenin’ weekend. 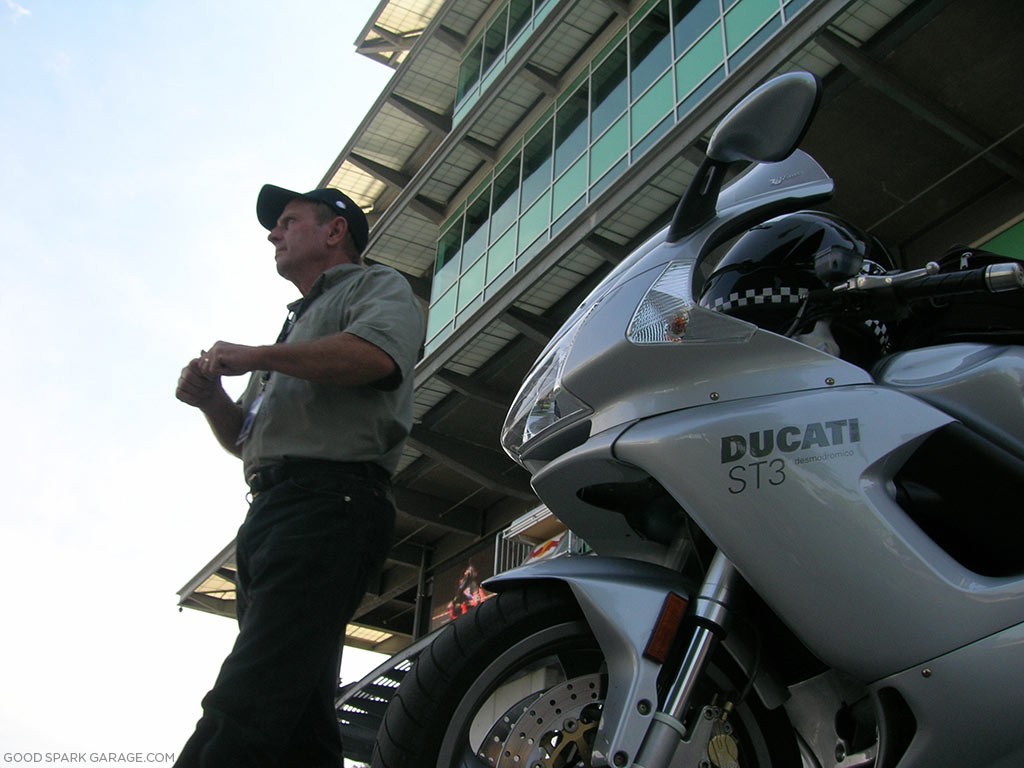 At the 2007 rally, we were lucky to have experienced it with our Dad, too. Not having him around any more, this pic is one of our favorites to pull up and reminisce. The iconic IMS Pagoda in the background, his motorcycle and, if you look closely, he put one of our “MotoGP in Indy” buttons on his hat. 🙂

The day was beautiful. It started out with a ride from the Murat Theatre (now called Old National Centre) led by a former GP champ, Kenny Roberts, Jr. A handful of Indianapolis policeman on motorcycles provided a non-stop route through downtown all the way to the entrance of IMS. 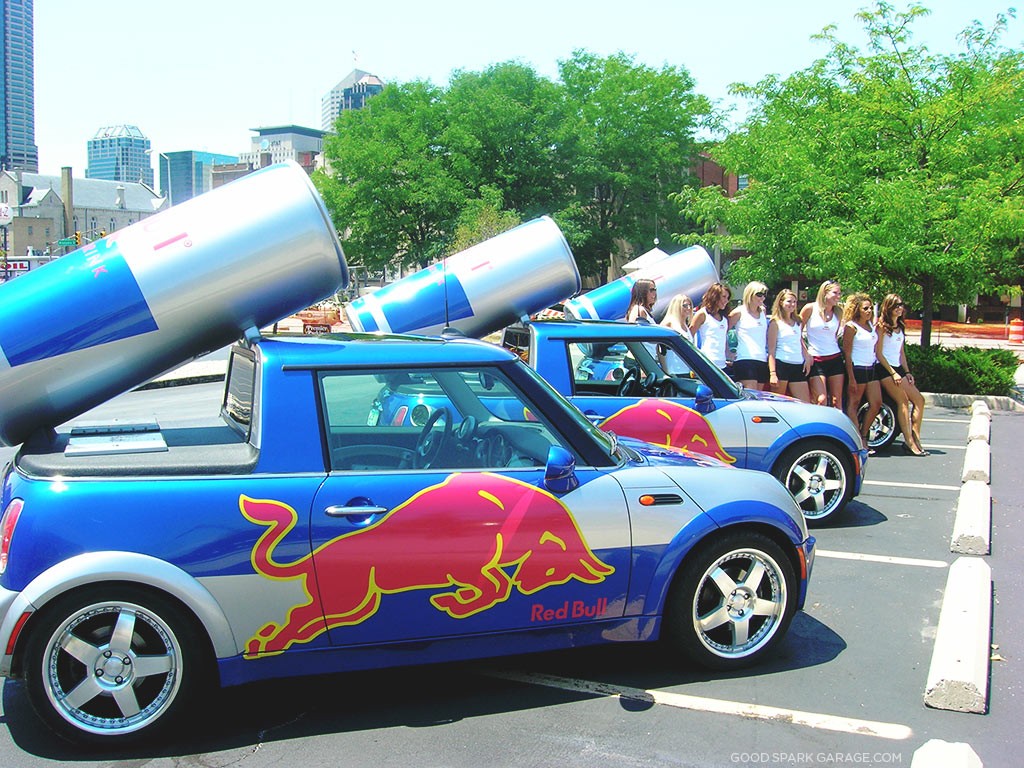 Laced with Red Bull party flair and legitimate big news, these were exciting times. The powers-that-be were all able to reach an agreement, from IMS to FIM to Dorna, they ushered in a massive change in the motorcycle community in and around Indianapolis. 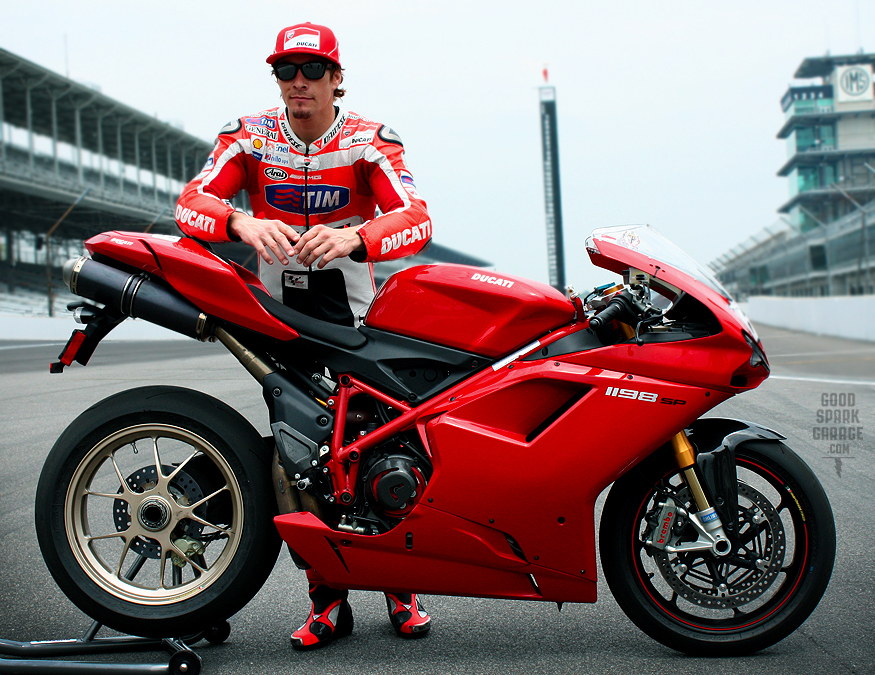 We were even lucky enough to watch Nicky Hayden’s inaugural lap of the new course, then complete a lap afterward with 30 other riders. We also sat in on a later track test and snapped this pic (above) of Nicky on an 1198SP Ducati (with the old scoring pylon in the background). 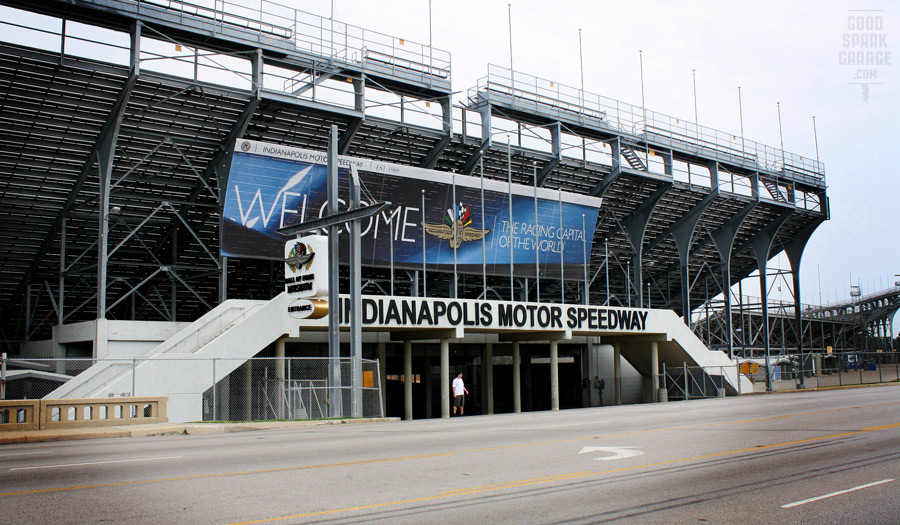 Okay, so fast forward to Round 10 of the 2015 Motorcycle Grand Prix; there was word going around about the possibility of IMS not returning to the 2016 schedule. Regardless, we set out to enjoy another year of fun at the Speedway and watching tons of motorcycles criss-cross the city streets and fill Monument Circle downtown. 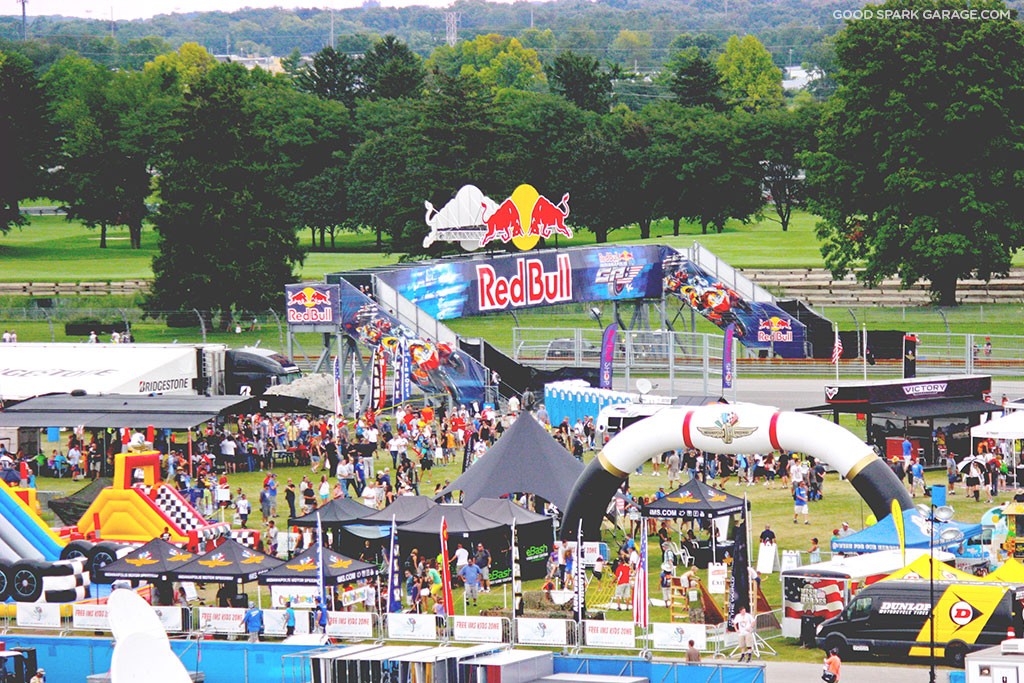 The Indianapolis Motor Speedway is special to people for many different reasons. You can’t avoid the nostalgia this place oozes around every corner. So many racing greats from the earliest days of motorsport all the way to today’s various leagues/series have fulfilled their dreams of setting foot on the brickyard. 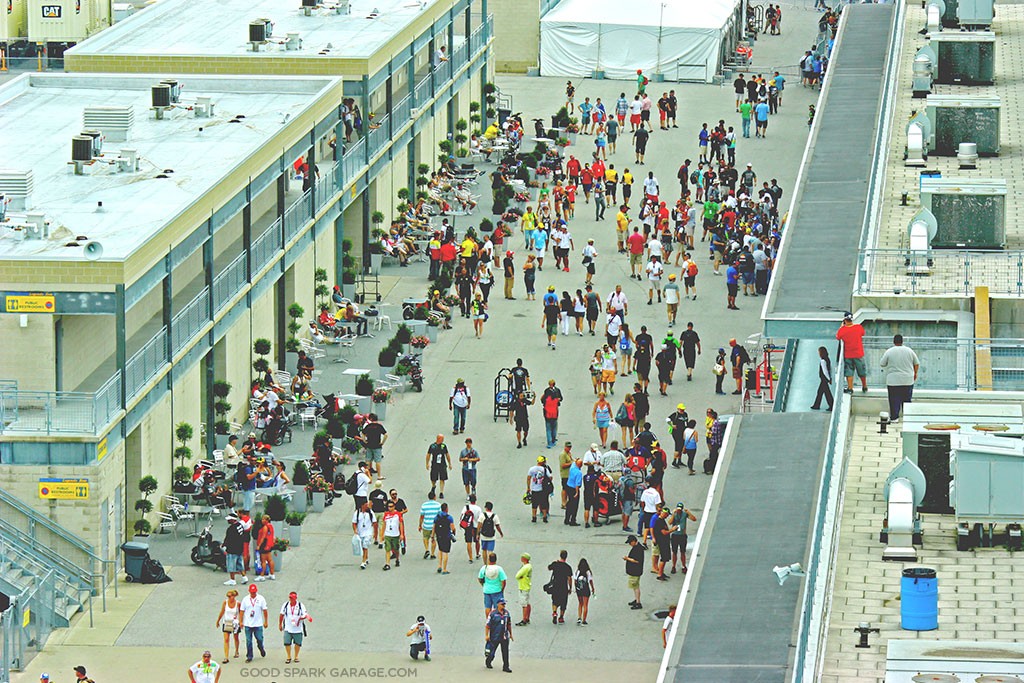 It’s Mecca. It sits high on bucket lists. It has lore. When you enter the track off of 16th Street, passing under the capital letters and waving flags, you emerge from the tunnel with goosebumps (we did anyway, every year). During the GP, the place would buzz with activity; yellow shirts, big screens, loudspeakers, safety vehicles, racers, merch tents, etc., etc., etc.

This year (2015), we rode in with an eclectic mix of bikes and parked right on the back straightaway along with what looked like tens of thousands of bikes. Sure, a lotta people were allowed out there, but it wasn’t lost on us that our parking lot for the day was smack dab on the very birthplace of the term “speedway.” 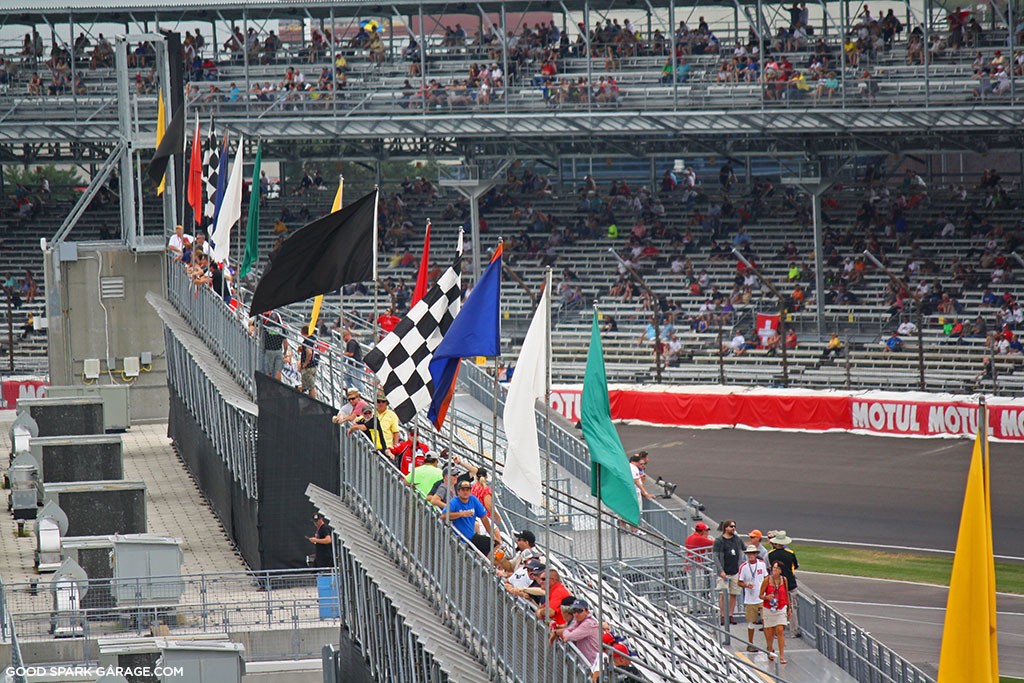 This is a good time to bring up some things to dispel, even if from our perspective only. Take a photograph from many angles at IMS and you’re bound to capture some available seats. Among its 560 acres, it can seat around 400,000 people…give or take. It’s tough to judge attendee interest by looking at pics of the bleachers, but hundreds of thousands of people have passed through the gates over the last several years for MotoGP alone. 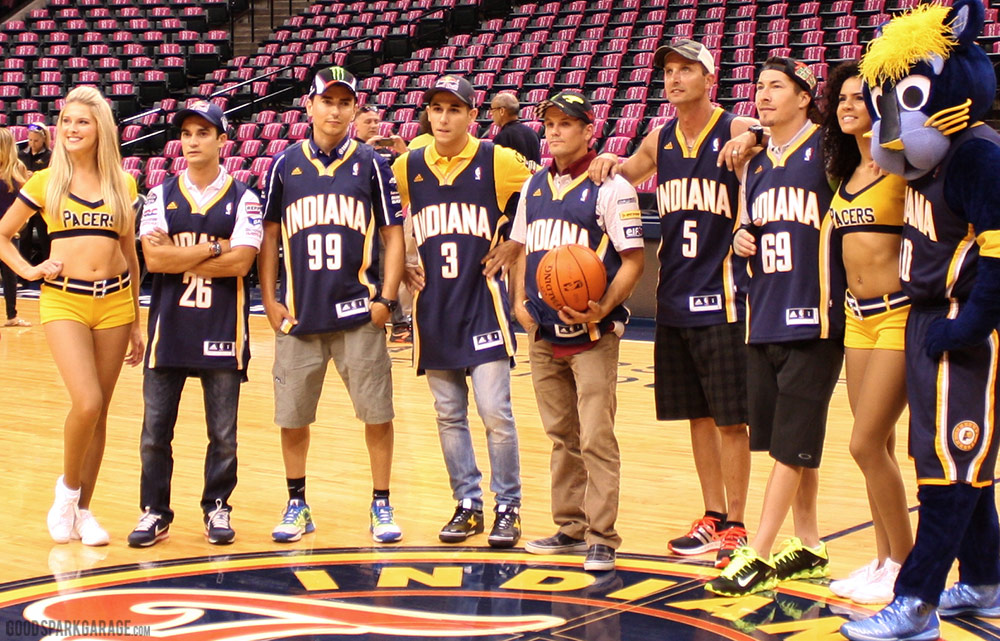 Racers enjoyed coming to the States and participating in the media events, which consisted of playing basketball, baseball, cycling and football with some of the city’s great athletes. (See our video/photo features of these events in the hotlinked words above.) 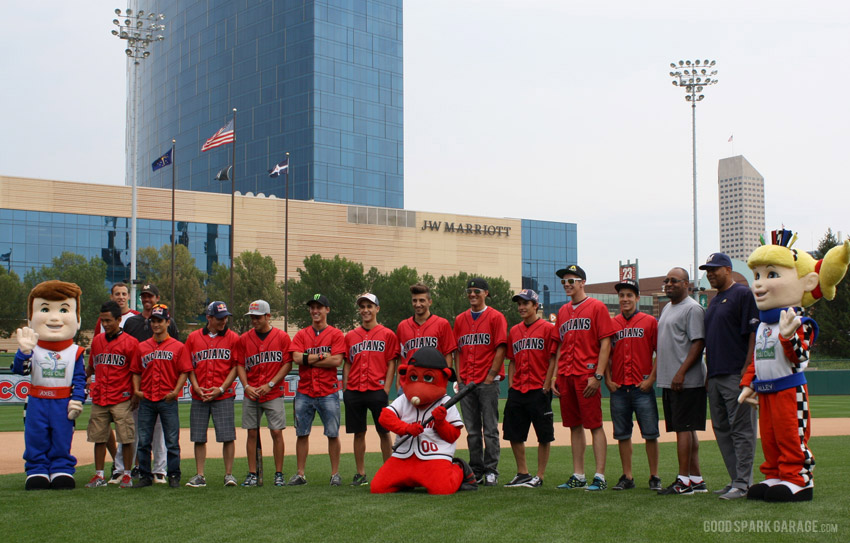 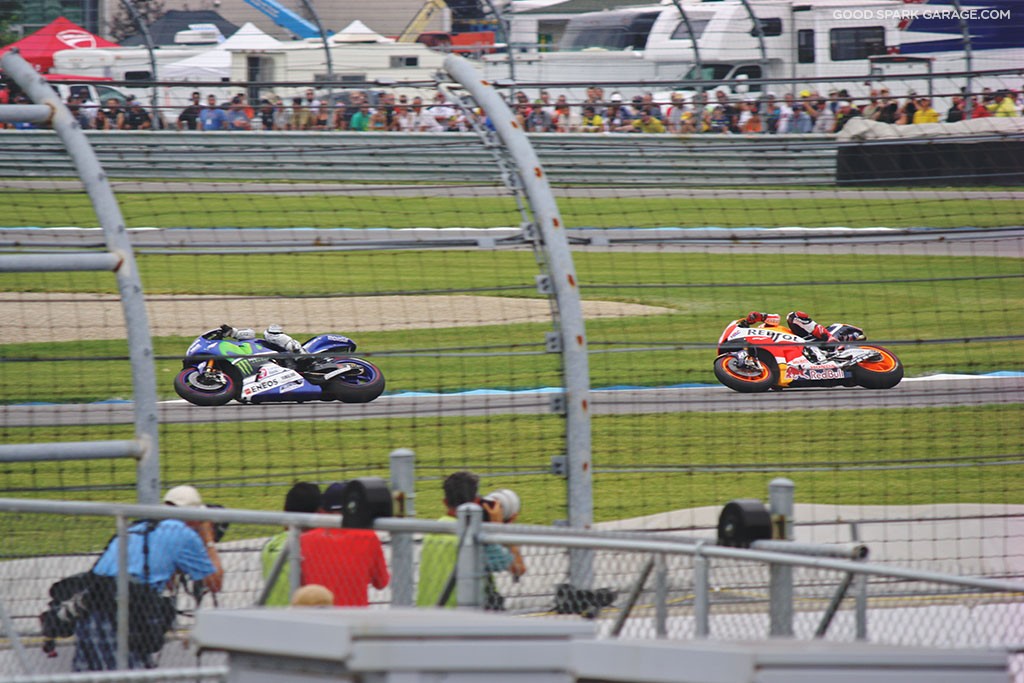 It’s also known that there are riders who dislike the course and its flatness, or tightness, or lack of a fast flow. As a racing fan, I saw thrills, spills and drama…and liked it. We saw a hurricane come through in 2008, track configuration changes, surface adjustments and challenging conditions. Bottom line, everyone had to race on it and the best man and machine had to win.

I’m looking forward to telling my grandkids about how the best motorcycle racers in the world lived in the City of Indianapolis for several weekends spanning nearly a decade. I’ll also remember how fun it was to ride among motorcyclists and race fans from all corners of the globe.

Of course, racing was a big part of the event, but certainly not the only thing to see and do. The midway had many vendor booths and activities to visit and the Westfield Powersports Vendor Marketplace gave folks a place to shop and peruse the latest accessories and apparel. 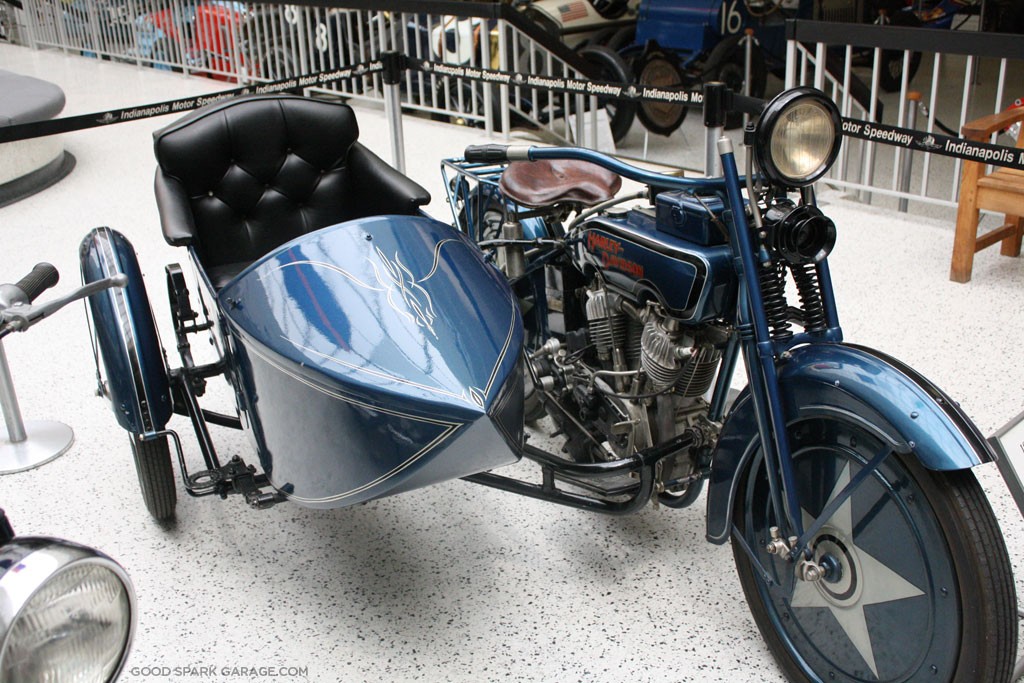 Look, we know MotoGP has run its course at IMS (at least for now, right?), but the hallowed grounds in Speedway, Indiana are still worth riding into for the feeling of just being there. Of course, you could also visit the stellar Hall of Fame Museum to see beautiful vintage race cars and a sprinkling of cool old bikes. 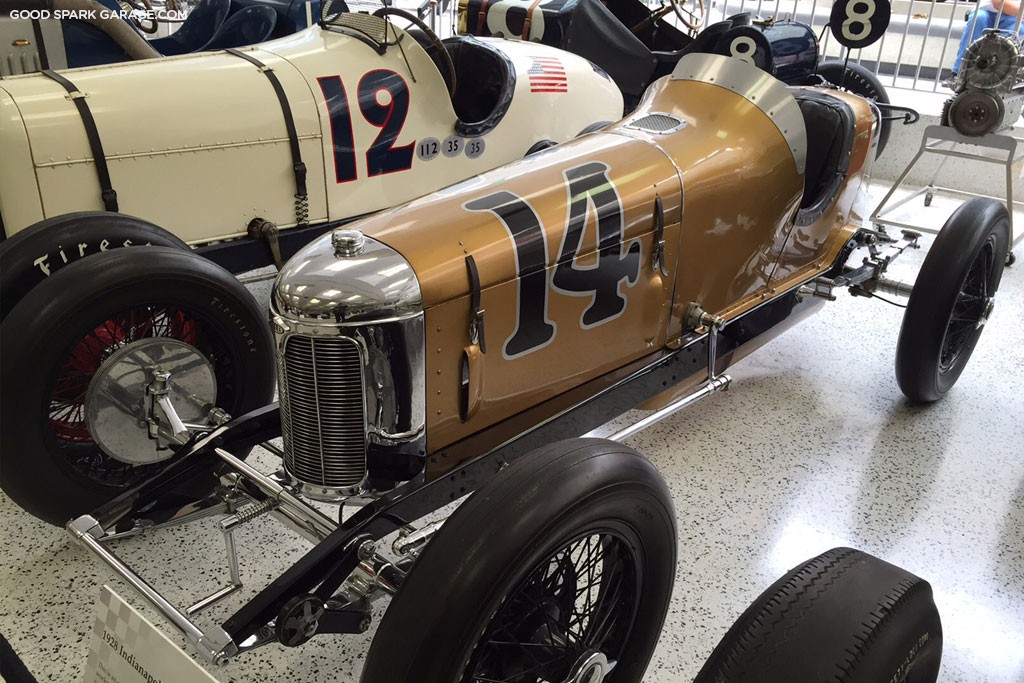 It was certainly a party and the folks at the speedway knew how to throw one alongside the always-hip and moto-savvy Red Bull team. The rabid fans, the international team transport vehicles, the summer sun and sounds of racing all melded together for some memorable years at IMS. Again, we say ‘dang it’ about its departure, but are quick to follow with some thankfulness. 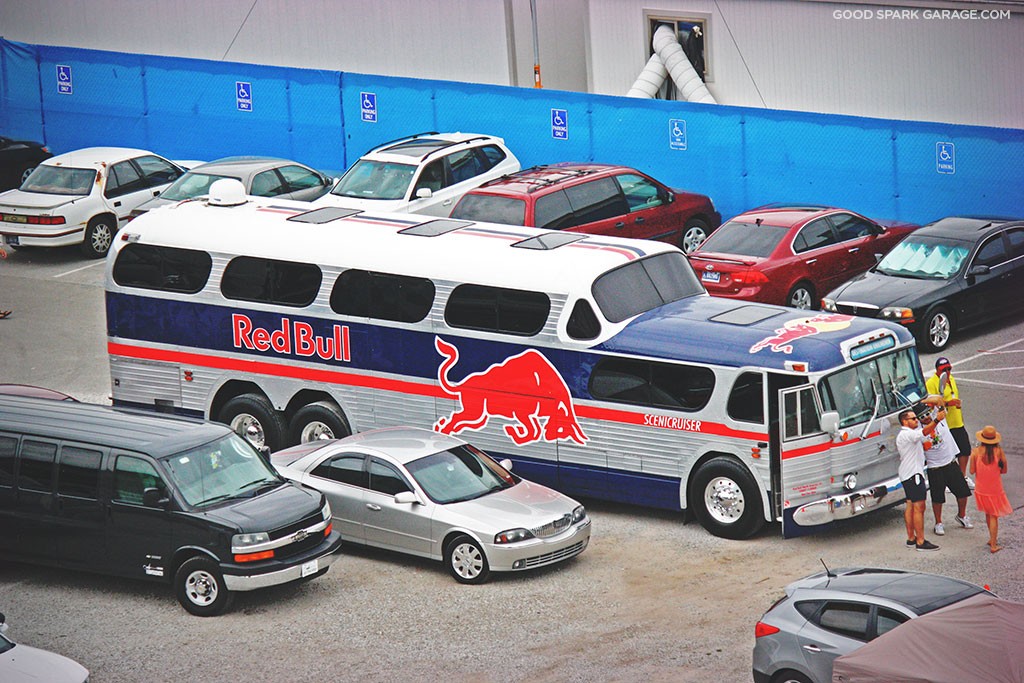 We’ve seen a wonderful ripple effect caused by MotoGP in Indy that we hope will stick around for a long time to come. This race weekend spawned one of the biggest gatherings of motorcycles in the Midwest, Motorcycles on Meridian, where 15,000 or more bikes lined Monument Circle and Meridian Street for several blocks. It also created an opportunity to bring back the Indy Mile at the nearby State Fairgrounds, one of the most storied mile tracks in flat track racing. 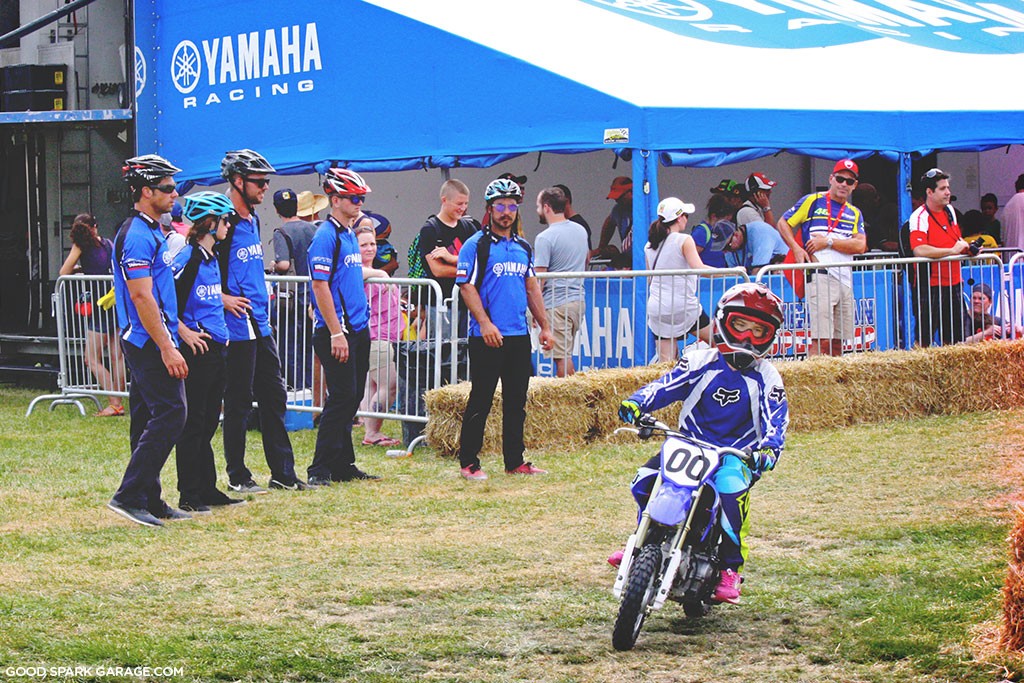 There will be a void in Indy in 2016. During late summer, we’ll have a MotoGP urge to ride to the Speedway, I’m sure. We understand its exit and will still smile thinking back to the first picture in this post. We took that pic in 2007 when the City of Indianapolis was buzzing with the excitement about its new role on the world stage. 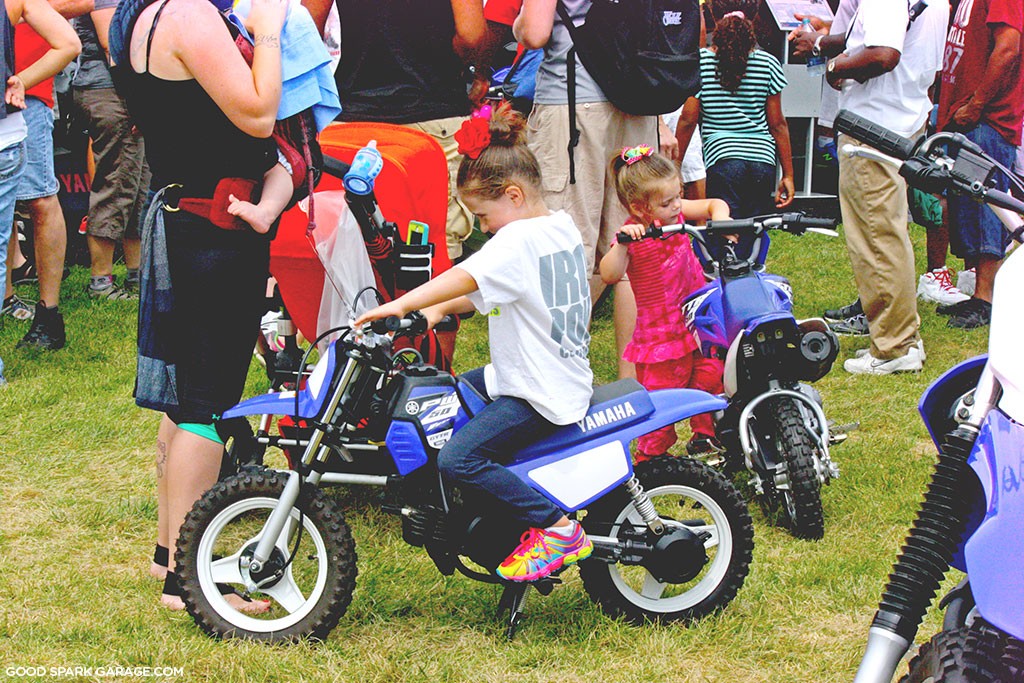 To sum up our thoughts on why this era was so special, look at the two pics above. While us ticket-buying motorcyclists were fed with something to do, something else was happening. Thousands and thousands of kids were being introduced to the sport of motorcycle racing and, heck, introduced to motorcycles in general. Perhaps this renaissance of motorcycling in Indianapolis will lead to a much more meaningful impact on the industry, having planted seeds in the minds of future riders. Beyond the local economic and tourism conversation, it’s neat to think Indy has played a big role in stoking the motorcycle spirit inside generations of riders. 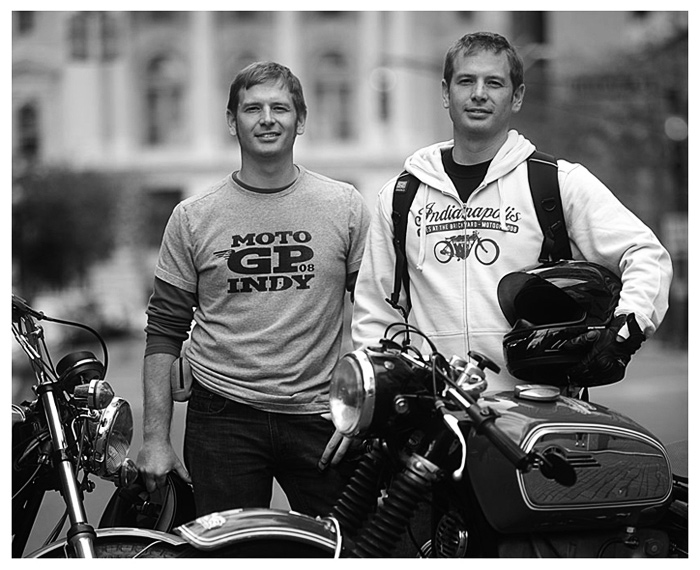 From Good Spark Garage: A number of people have made our MotoGP experience at the Indianapolis Motor Speedway so memorable, from the first event to its last. A big thanks goes to LeeAnne Singletary, Doug Boles and Suzi Elliot for being great hosts and stewards of the IMS brand.

Here we are at left, in 2007, so excited about what was to come that we made our own T-shirts.