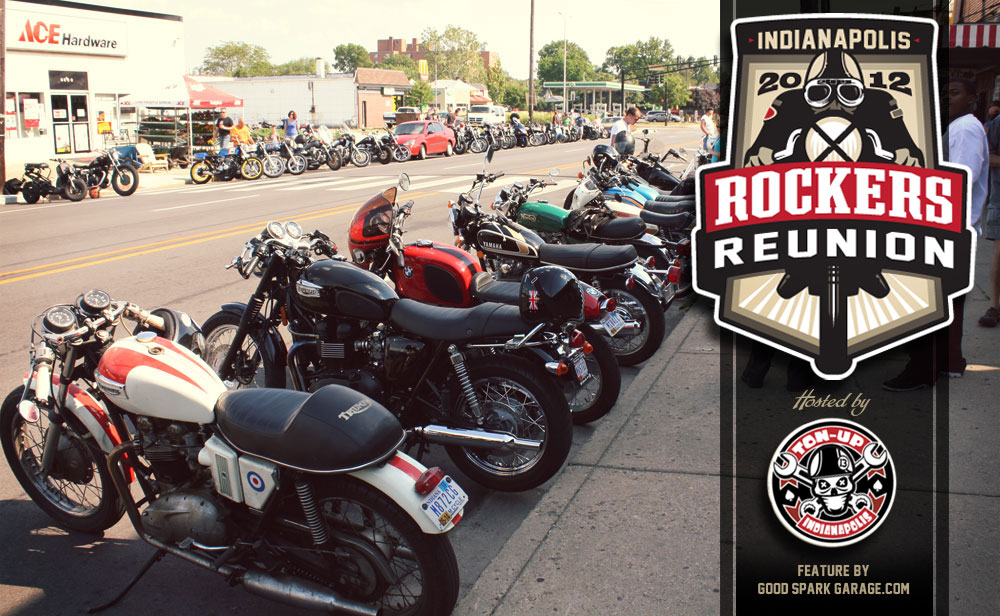 Just seven miles from Pole Day qualifications at the Indianapolis Motor Speedway on May 19th, motorcycle engines dominated the soundscape at Indy’s Rockers Reunion. The thumping and buzzing of over 300 4-cylinders, parallel twins, triples, old singles and screaming two-strokes confirmed the increasing popularity of this event. Check out our pics for a mere taste of the cool found at Indy’s best vintage bike gathering of the year. 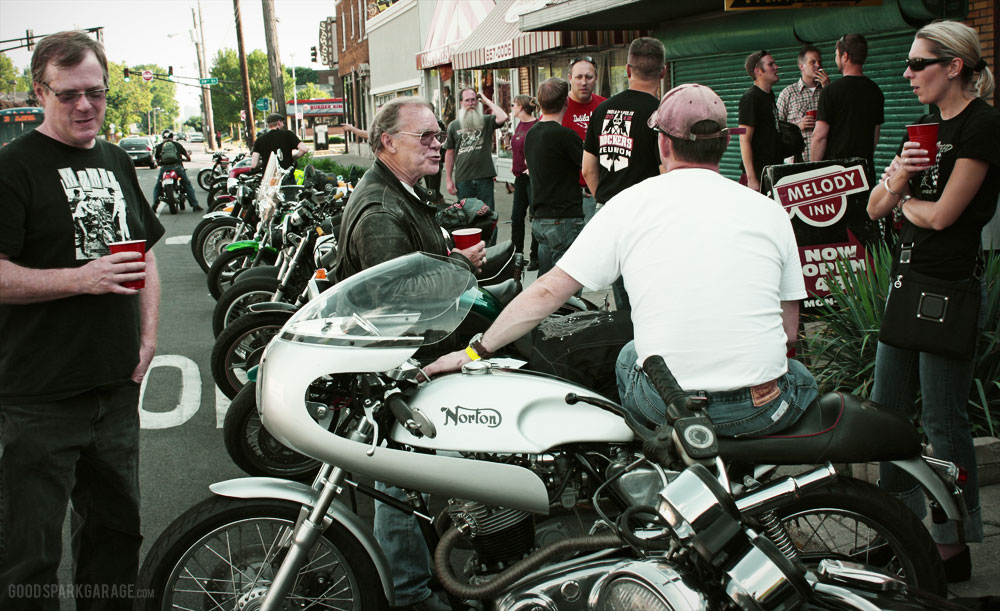 Bikes and enthusiasts start to gather on Illinois Street near the intersection of 38th Street. 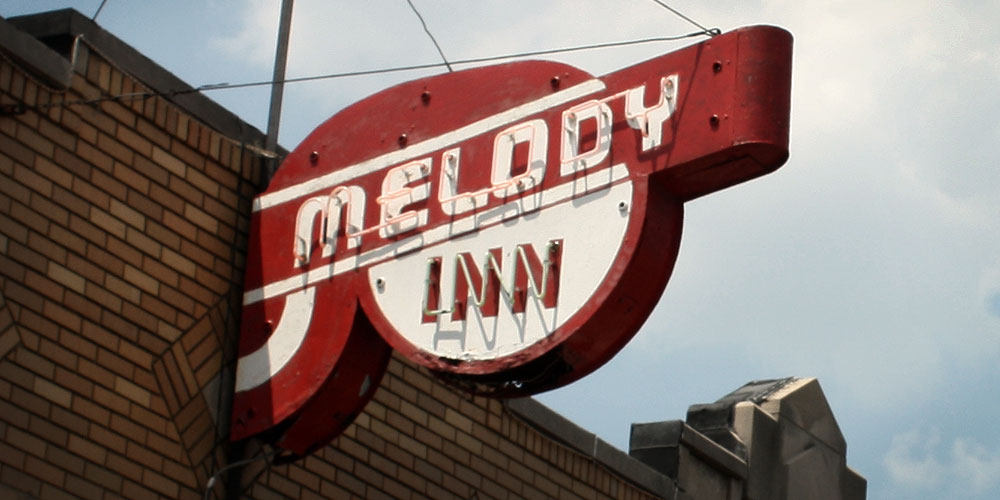 The Melody Inn is one of Indy’s oldest bars, founded in the mid 1930s. Its curbs and sidewalks are the locale for the bike show and destination of The Rolling Bones, the event’s first organized vintage ride from Speed City Cycle & Scooter. 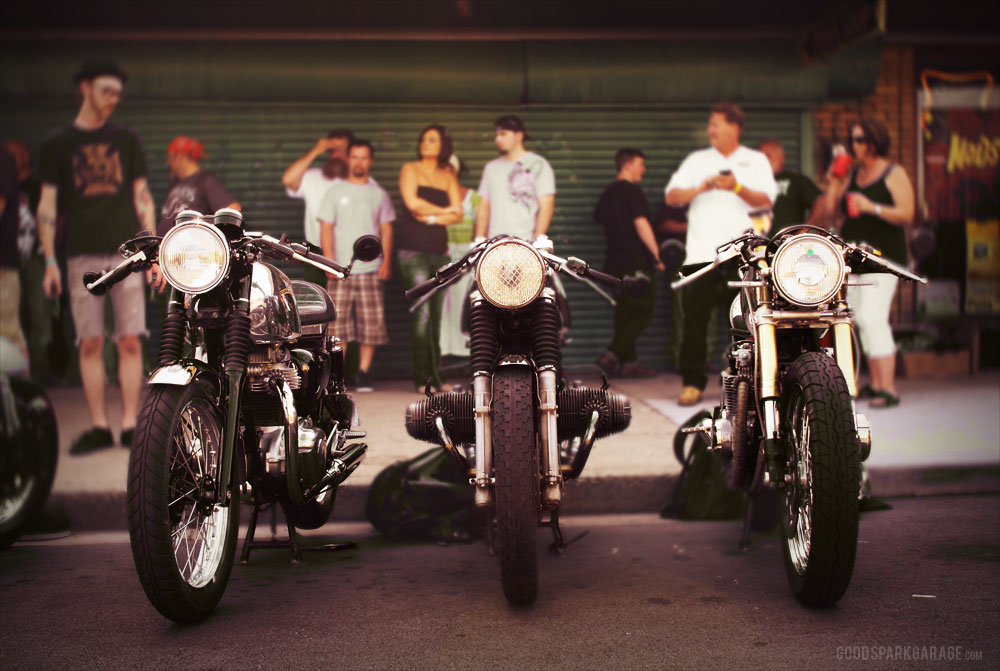 Above: Lookin’ for trouble – the Good Spark Garage cafe racers on the left (Kawasaki W650 and BMW R75/6) and the Meyerbuilt Metalworks cafe racer on the right (Honda CB550). 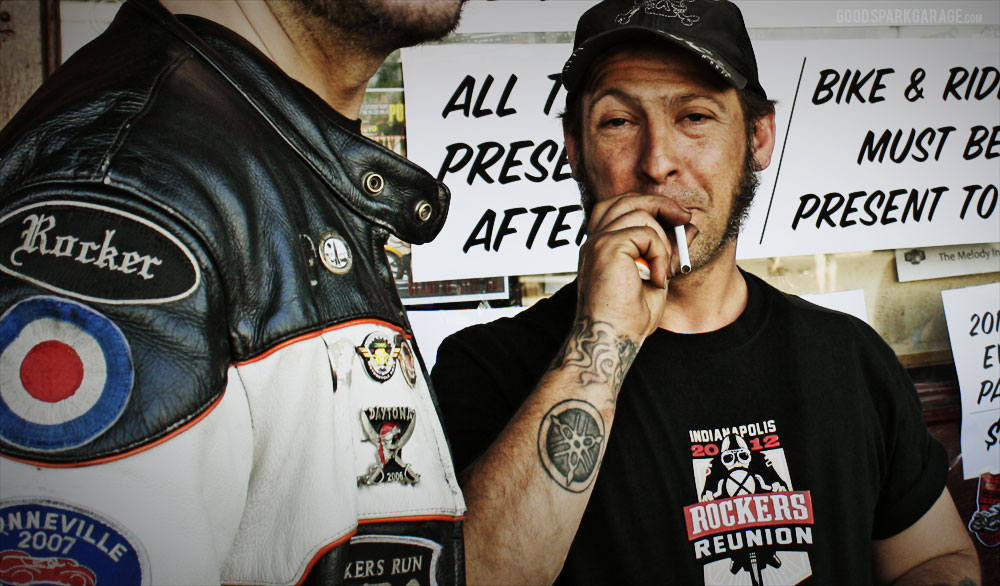 Above: Ton Up Indy members, Deacon Sean (right) mans the registration table while Roy Griffith (left – see our feature on him) looks for his next assignment. Ton-upper and CB750 rider, Adam Ratcliff, humbly and tirelessly coordinates this event with the help of his cohorts. 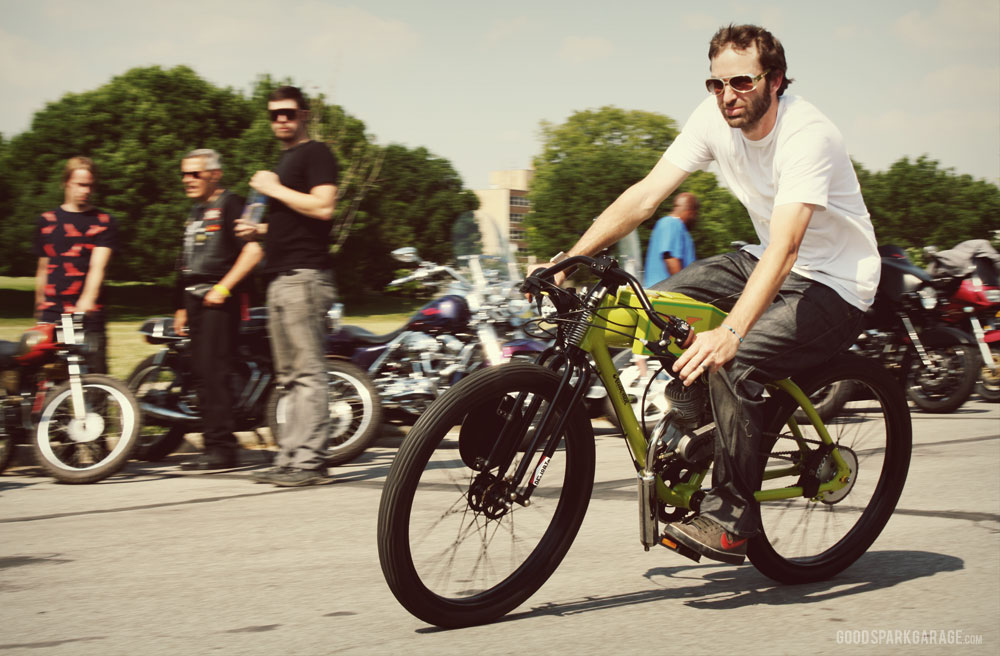 Above: Fox from National Moto+Cycle Co. on a gas-powered bicycle called the Super X, an homage to board track racers (good for over 120mpg). Look for a feature about these guys soon on Good Spark Garage. 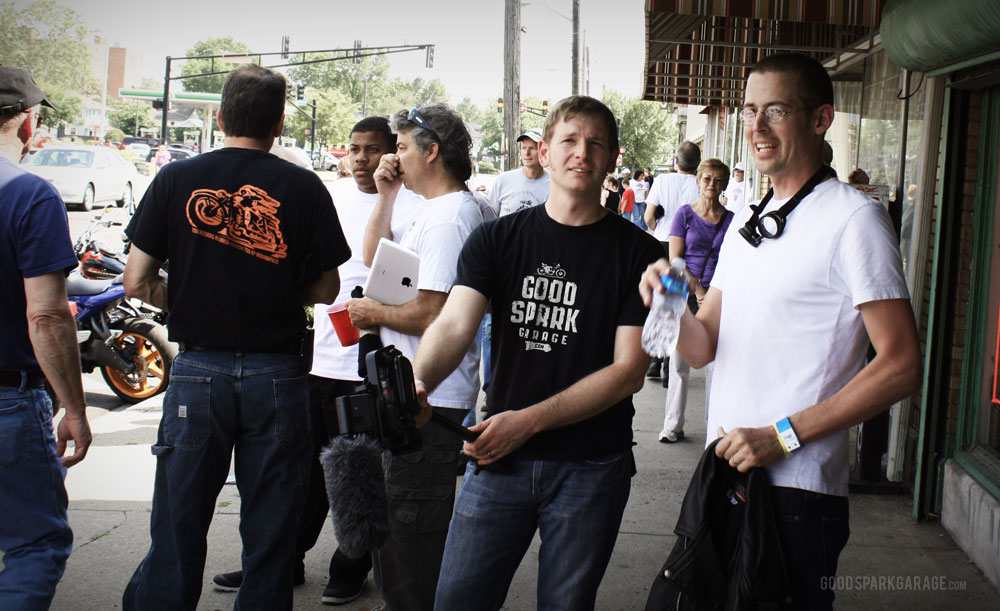 Above: That’s me (Corey) standing with Chris Sickels, the fella we featured on his ’65 Harley Pacer. This event is a aptly named; it’s a reunion indeed. It’s a chance to catch up with folks we’ve thankfully met through motorcycling around the Indy area.The chopper below was painted (and rode in on) by Nate Spainhower, the guy who painted our Flying W bobber built by Ardcore Choppers. 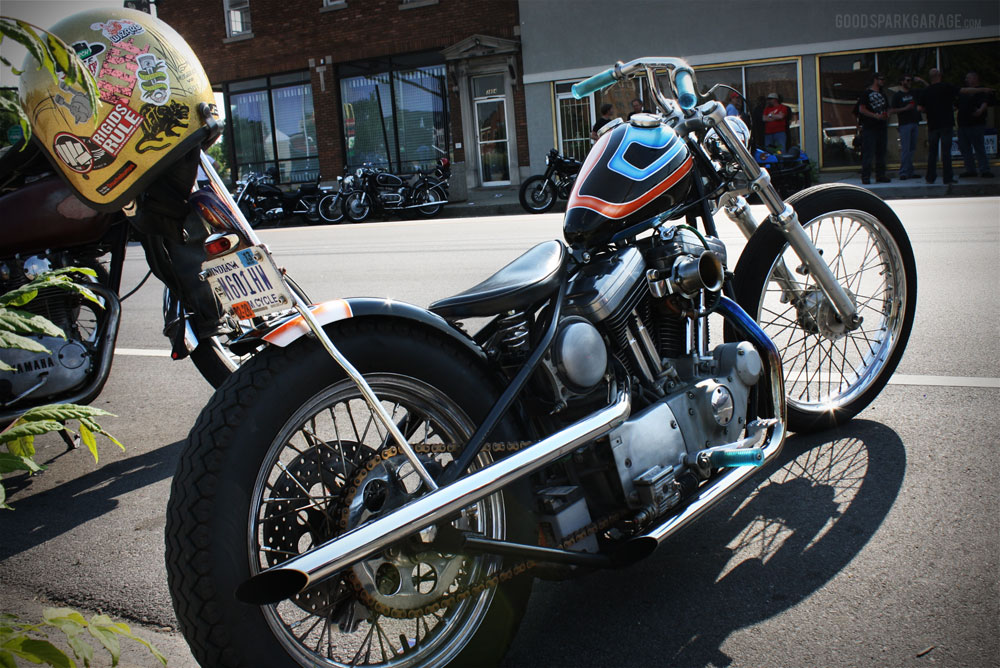 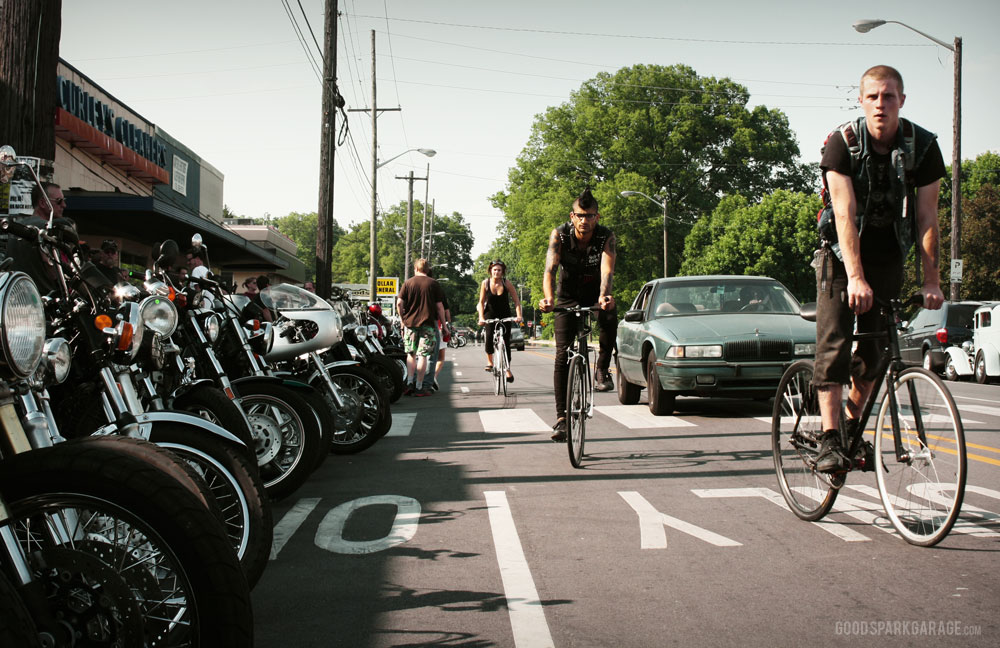 After the bike show and street gathering, attendees rode over to Jack Rabbit Slims for the afterparty, a 10-mile jaunt south. Awards were handed out for various categories and more moto-fellowship ensued. 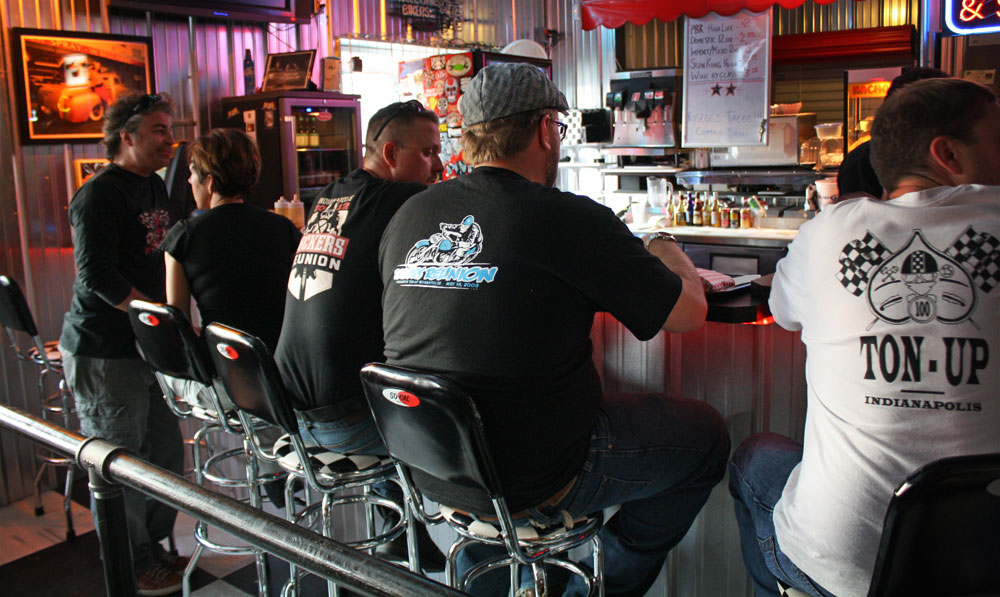 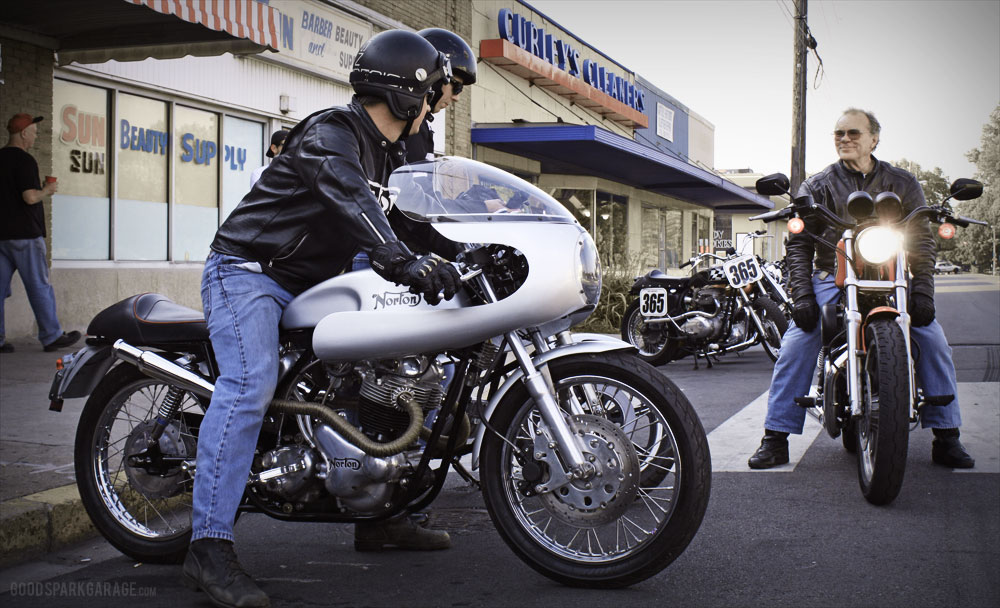 We’ll be ready for next year’s event. You coming? It’s a good time and you’ll surely be welcomed by Ton Up Indy, motorcycle enthusiasts and all the passers-by who attend Indy Rockers Reunion.

The high-gloss, good-lookin' BikeEXIF calendar has arrived at Good Spark Garage. Get yerself one today and…

Riding in a sidecar is fun! In the video below, you'll see tips to help make it…