Chris Sickels is an illustrator from Greenfield, Indiana. He rides a 1965 Harley-Davidson Pacer, a 175cc two-stroke with unabashed nicks and dings. We visited Red Nose Studio where his world of sculpted puppets and miniature environments line the walls and crowd his desks. 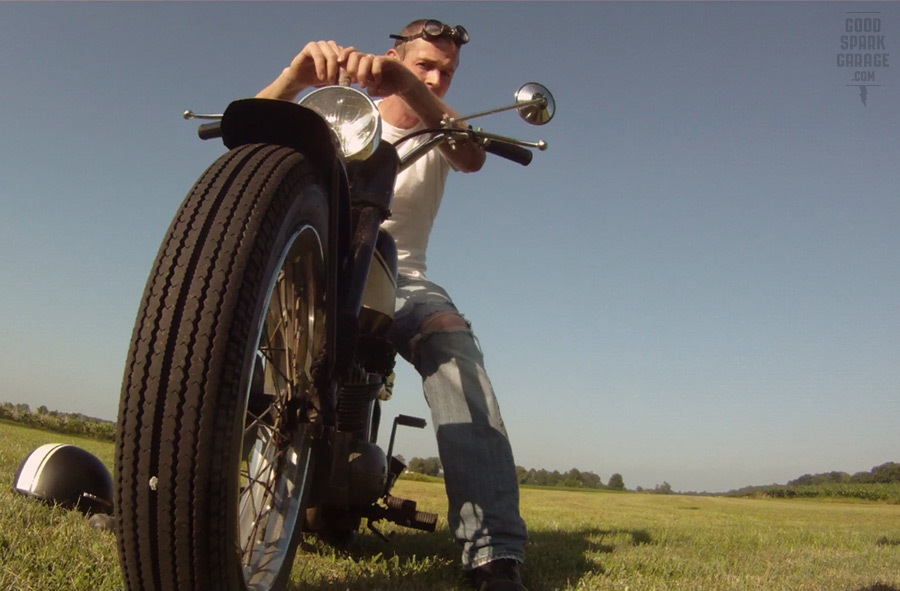 Chris creates three-dimensional scenes built strictly for photographic illustrations that will later be utilized in magazines, books, and other marketing collateral. Two particular pieces commanded our attention. One is a dapper, gangling fellow on a fictitiously elongated BMW and the other is a café racing character on a gritty Norton. The latter features a headlight made from a Dremeled-down eyeglass lens, some faux-rust for convincing patina, and a tiny-but-accurate pudding bowl helmet atop an oddly proportioned rider, all contributing to the awkward authenticity of Chris’ work. 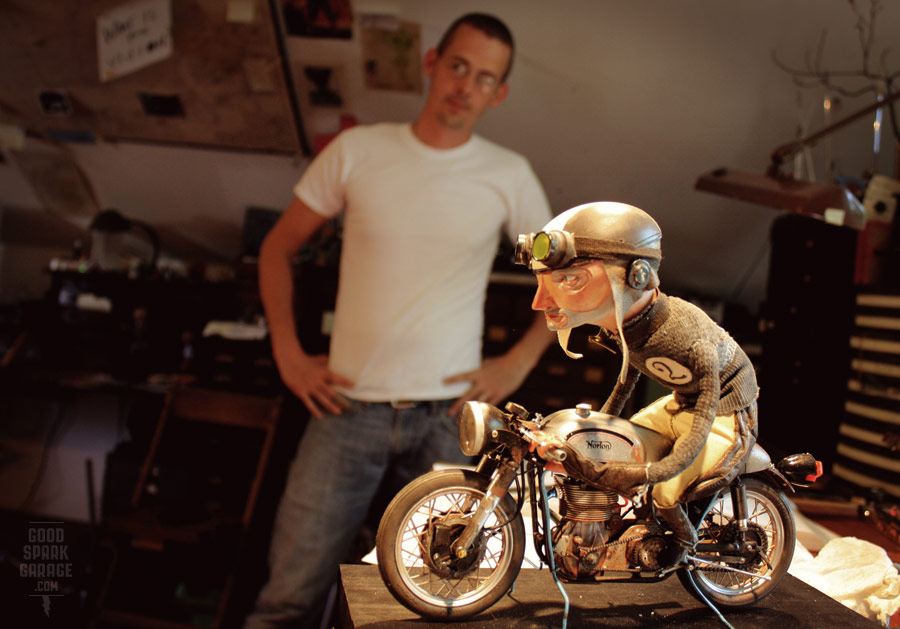 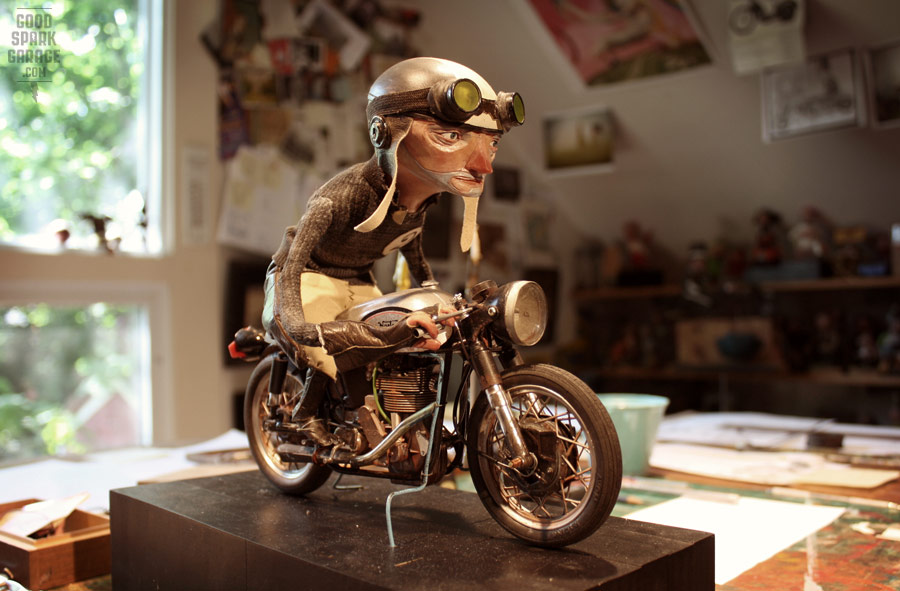 The scenes are sketched before the characters are sculpted, followed by paint and hand-sewn clothing. Then, a set is built around the characters in preparation for a final photograph. 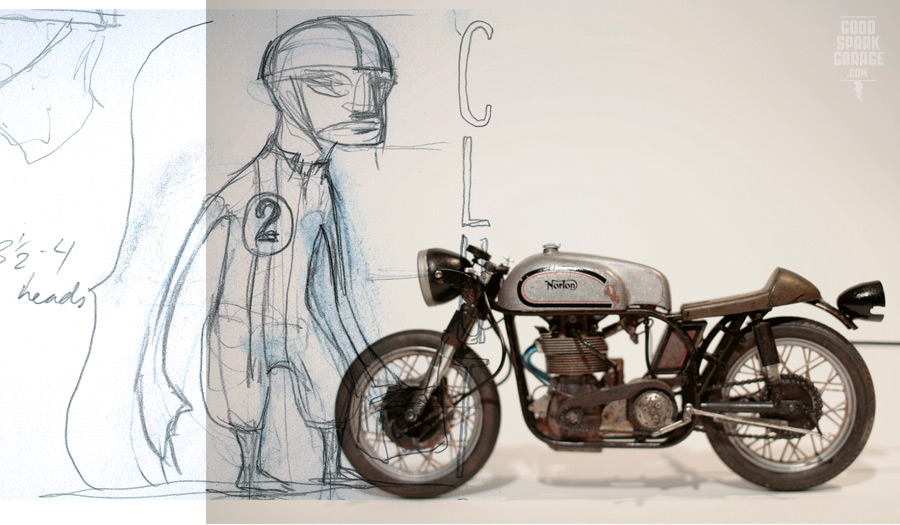 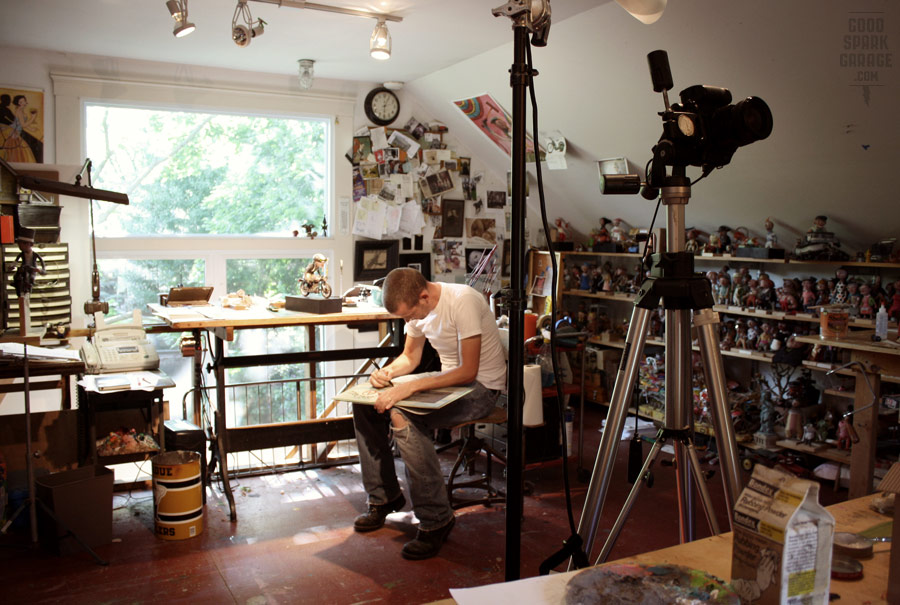 We found ourselves surrounded by hundreds of eyes, frozen in the emotion that Chris assigned them. We scanned every square inch of the studio, imagining what kind of strange realm these red-nosed creatures were created for. 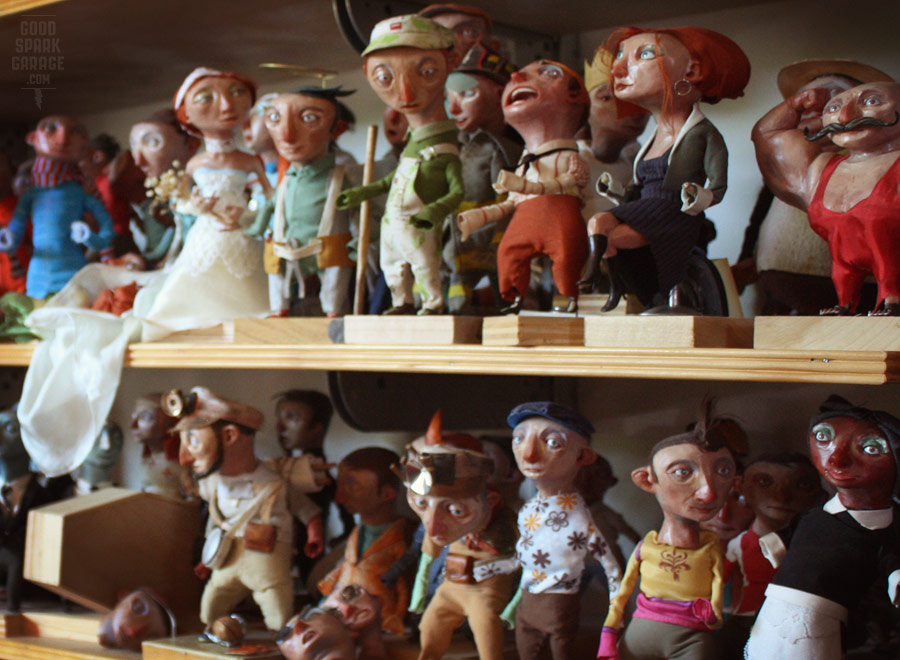 That tugboat on the top shelf (below) was featured in the children’s book, “Here Comes the Garbage Barge.” 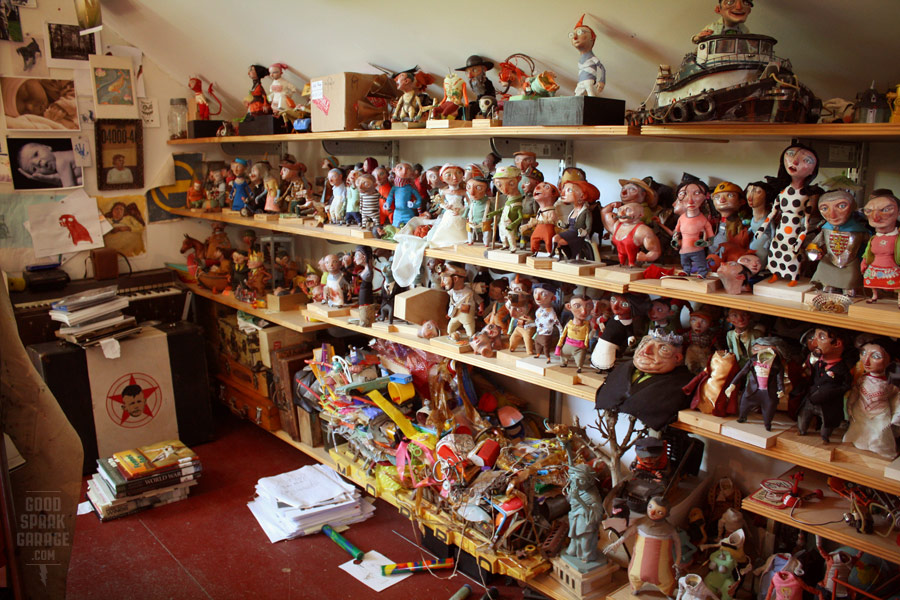 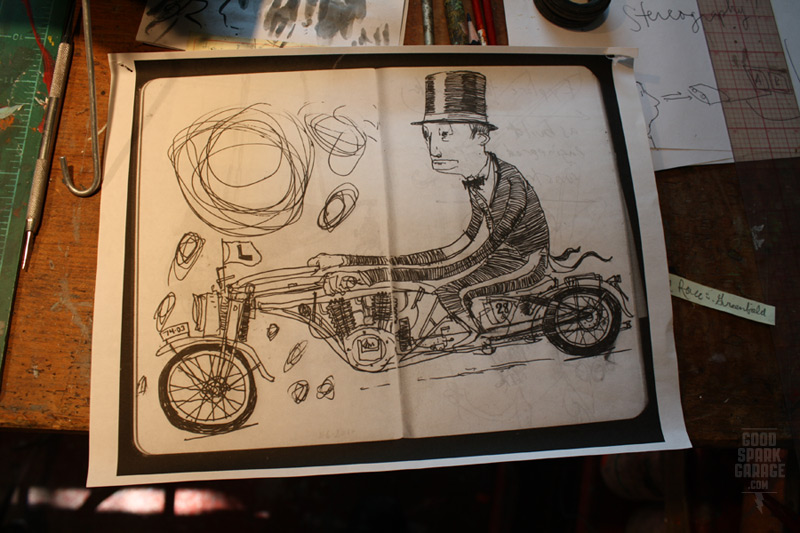 It’s fun to spot when Chris’ interest in vintage motorcycles creeps into the unique and intricate world of Red Nose Studio. This rusty airhead was altered and skewed to fit its equally extended rider whose coattails flap dangerously near the rear wheel. The copper tank is a thing of beauty, in a distressed weathered kinda way, complete with a flaking BMW roundel. 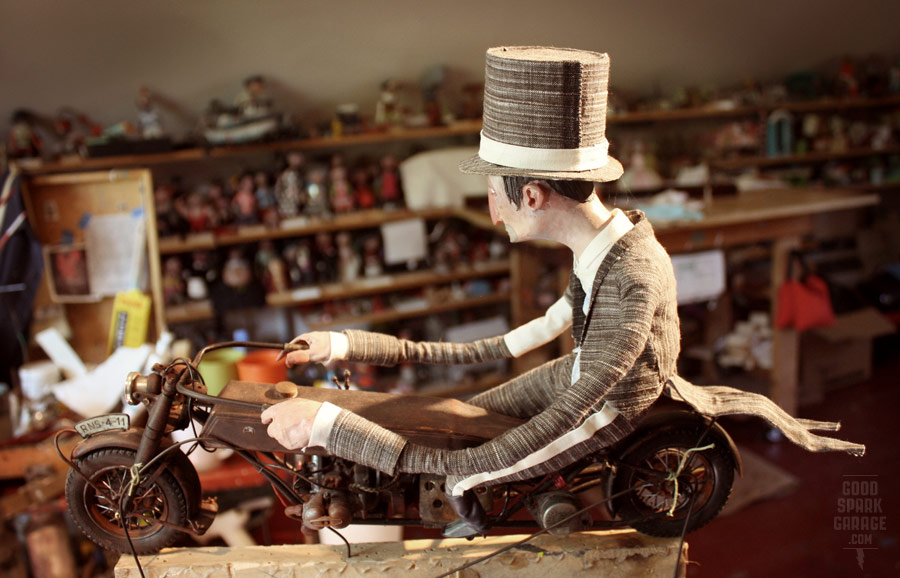 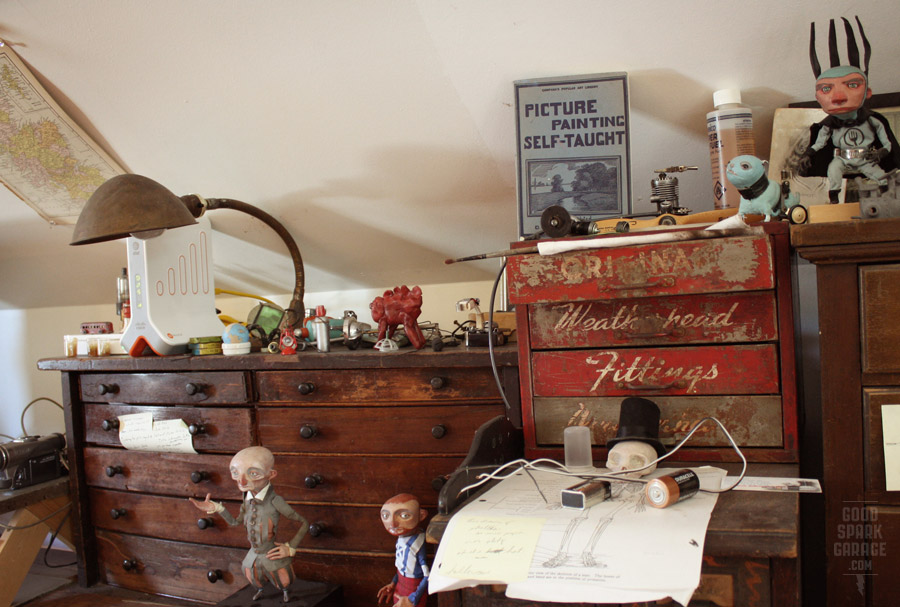 Many, many drawers hold parts and pieces of discarded and disassembled toys, typewriters, gadgets and appliances. For backdrops, he sometimes uses what’s around the studio; in the pic below, the hanging background is his marked-up and stained desktop. 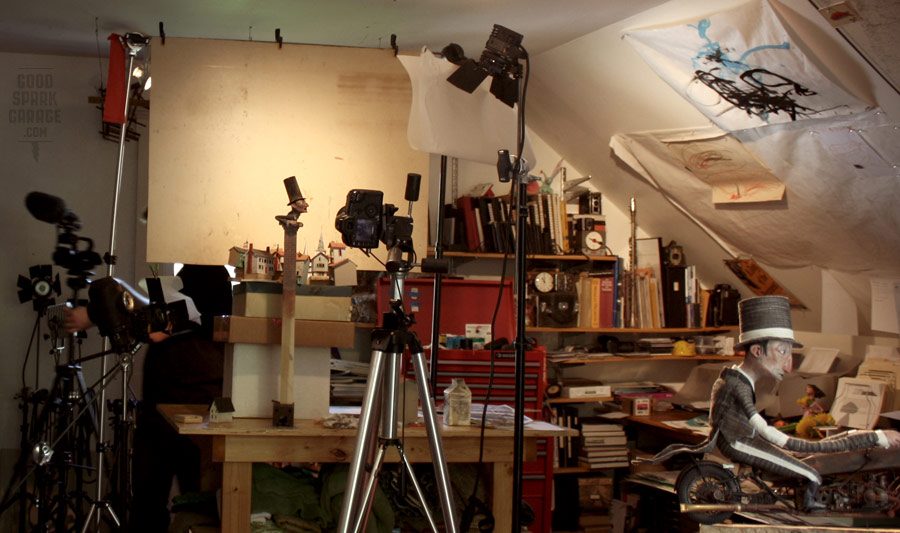 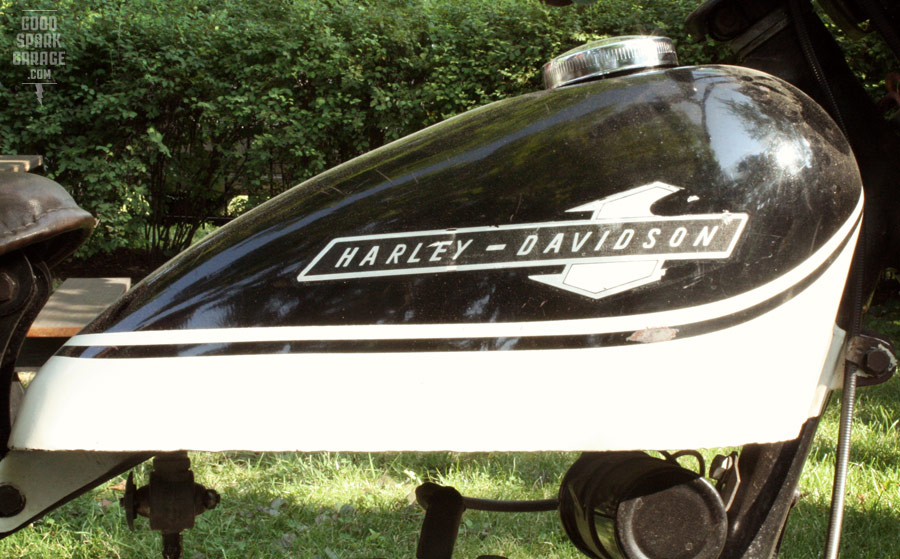 When Chris tells people he rides a Harley, we’re sure they don’t picture this little ring-dinging Pacer. At Good Spark Garage, we like to consider ourselves resourceful, so when we see things like the hand-made rear rack and custom passenger pad, we say out loud, “cool.” 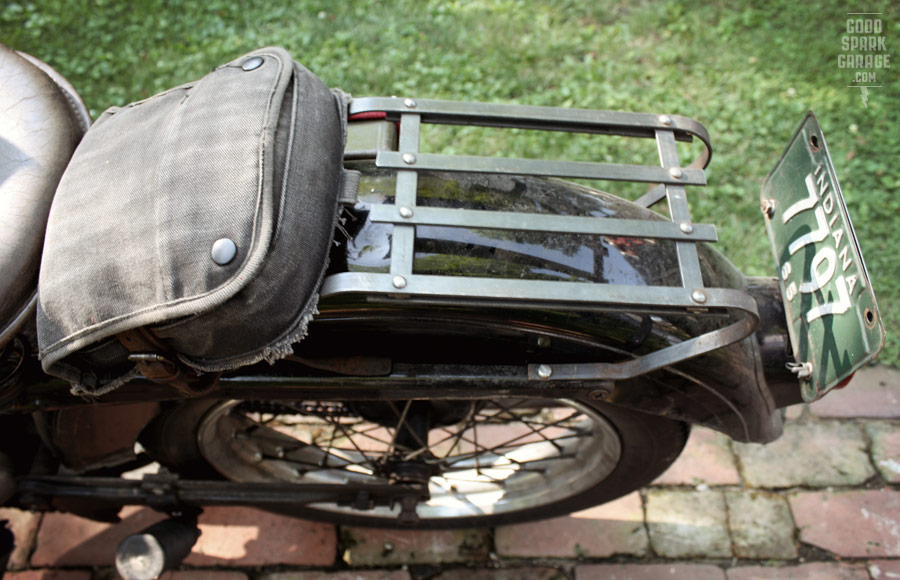 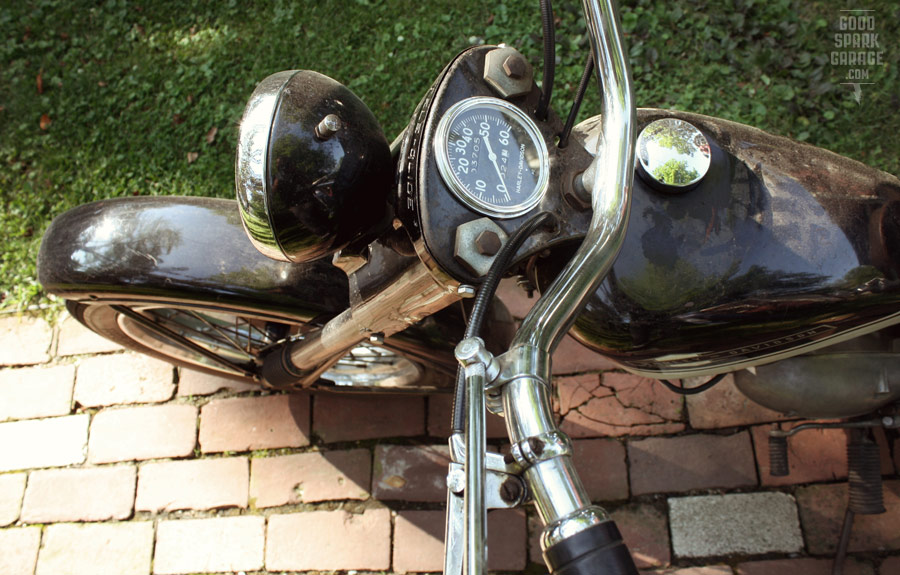 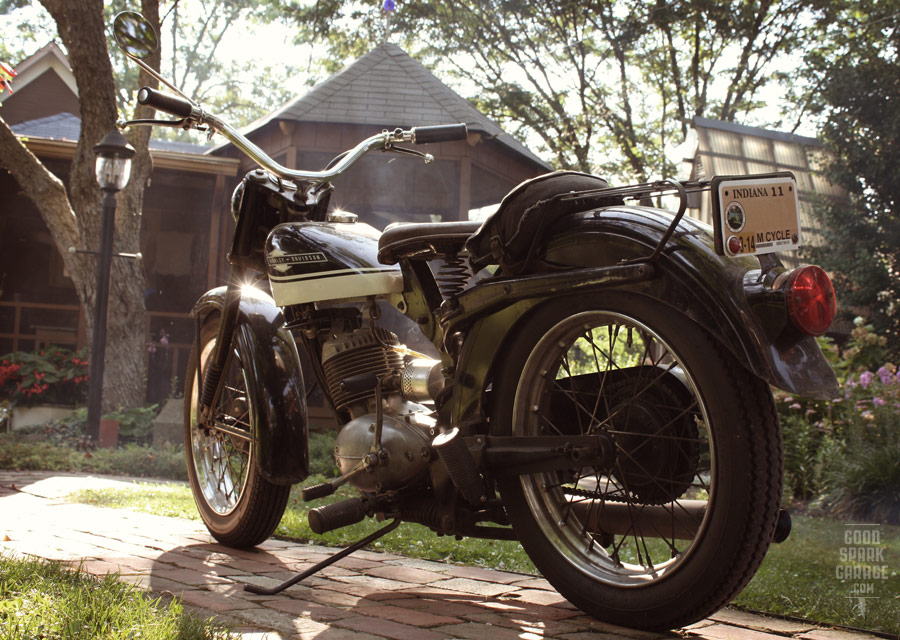 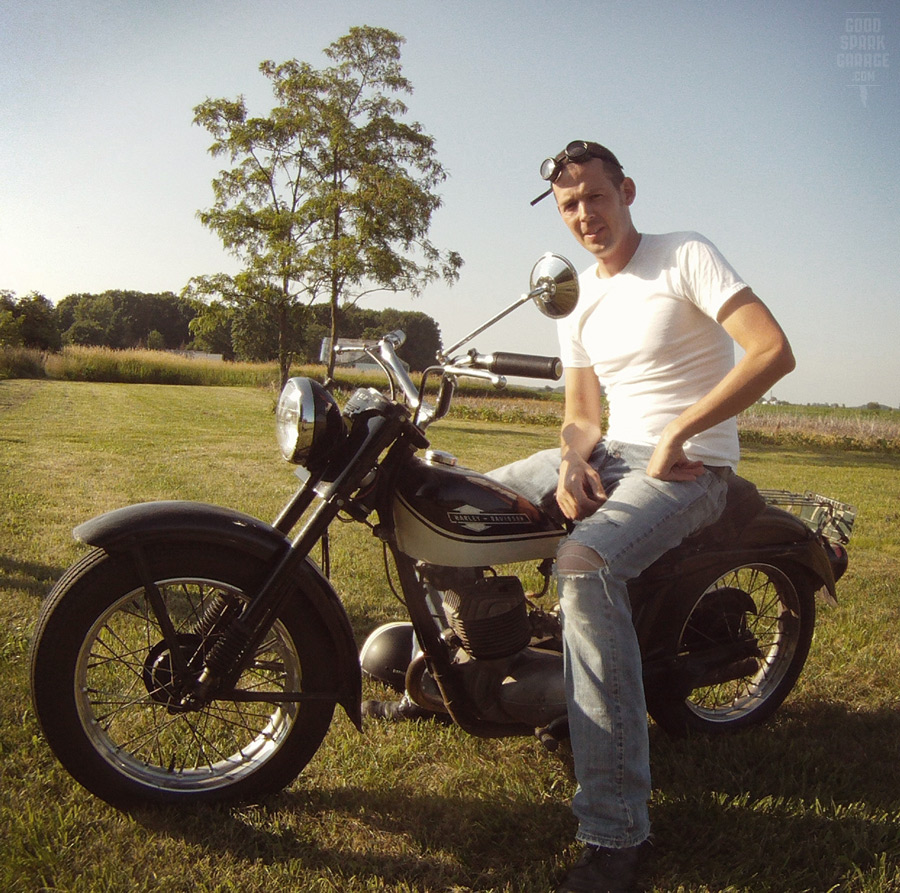 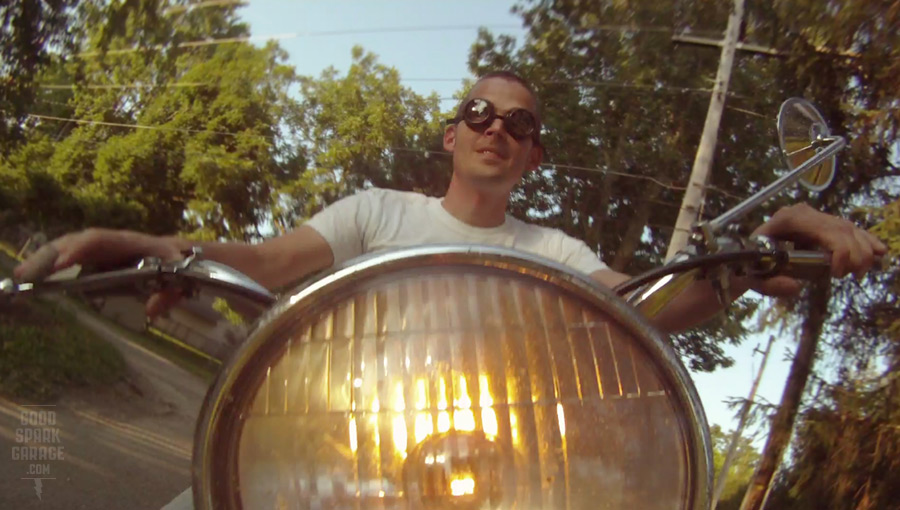 If we told you about a guy who rides a Harley, sits in a barn and makes demonstrative little puppets all day, well, Chris is the opposite of what you might imagine. He’s a proper family man, a hard worker and a polite motorcycle rider/tinkerer.

The Scene: Mods vs Rockers Chicago 2012

The scene found at Chicago's Mods vs Rockers goes far beyond the cafe racer craze. Sure,…