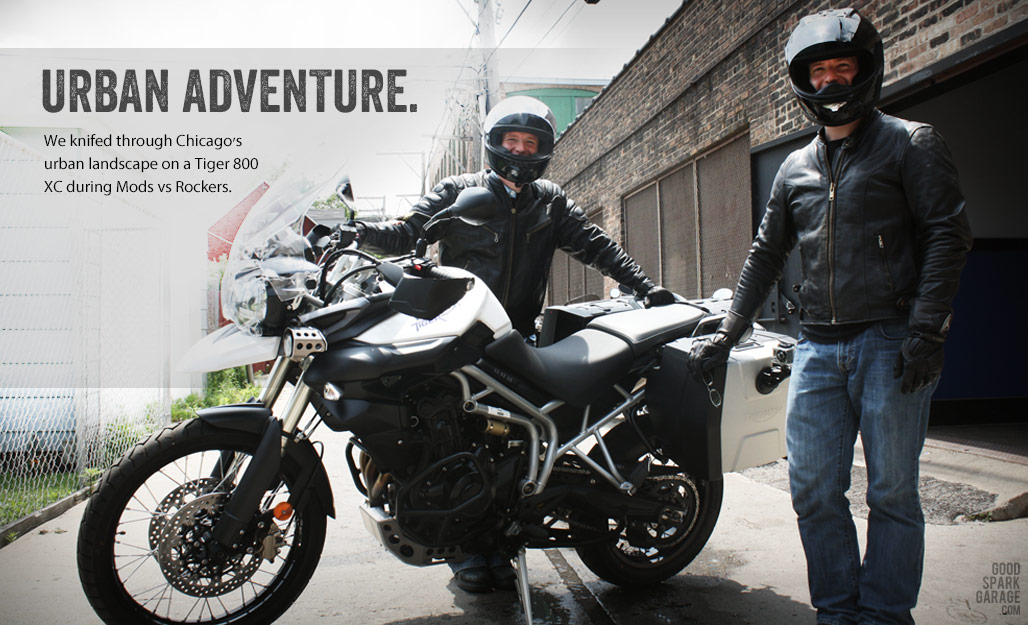 This is a look back on our 2011 weekend adventure in Chicago during the annual Mods vs Rockers event. One of the event sponsors, Motoworks Chicago, provided us with a Tiger 800 XC to ride and film from (a big thanks to Johnny Scheff!). Here’s a photo gallery and story of how much fun we had surrounded by the headlining British marque.

Triumphs of all ages made their presence known among the sea of classic, custom, modern and rare bikes. MvR pays homage to the 60s British culture-clash of the scooter-riding Mods and the cafe-racin’ Rockers. It was easy to see Triumph’s respect for its heritage, as the vintage and modern models shared the spotlight. The new Bonnevilles and Thruxtons looked right at home as the various new triples also commanded the attention of passers-by. 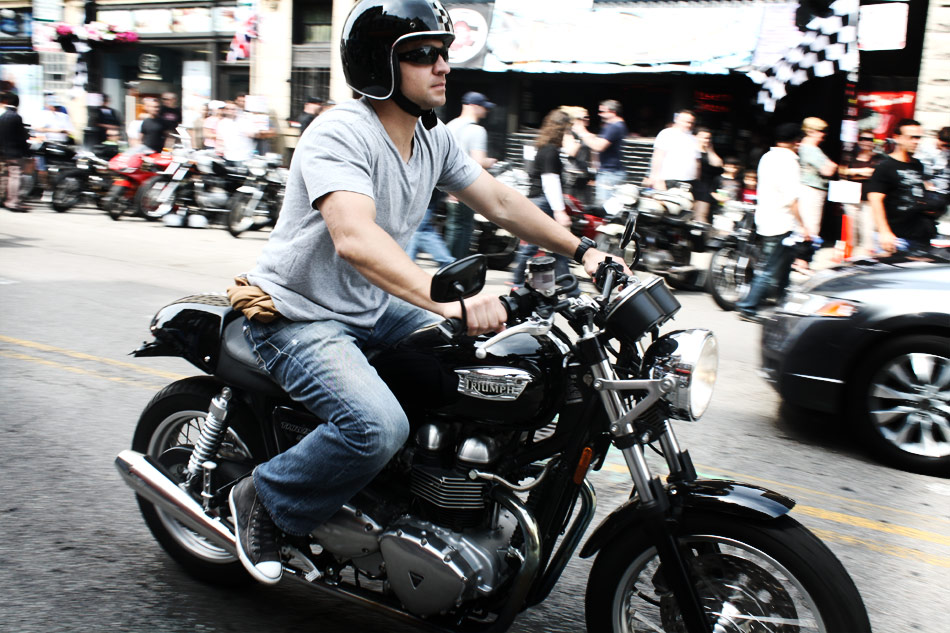 The torquey 2011 white Tiger navigated the unpredictable surface and flow of the Windy City streets with ease. Point A to Point B was fun, thanks to the adventure-bike ergos and ready-to-pounce performance. Sure, we dig the nostalgic qualities of a kick-only, pre-unit Bonnie, but the smooth ride down memory lane was a treat on the Tiger.

The Tiger 800 XC was a more-than-capable camera vehicle. We wanted to film the ride from Delilah’s (where the bike show took place) to the Bottom Lounge (for even more festivities), but that would’ve proven difficult on our single-seat café racers. Darting around traffic 2-up on the nimble adventure-bike amidst a leapfrogging group of motorcycles never felt so easy!

Some folks remain true to the old Triumphs; some pursue only modern tech. Some choose nostalgia, pursuing old looks with new tech. We overheard several bystanders inquire how old the new bikes were. 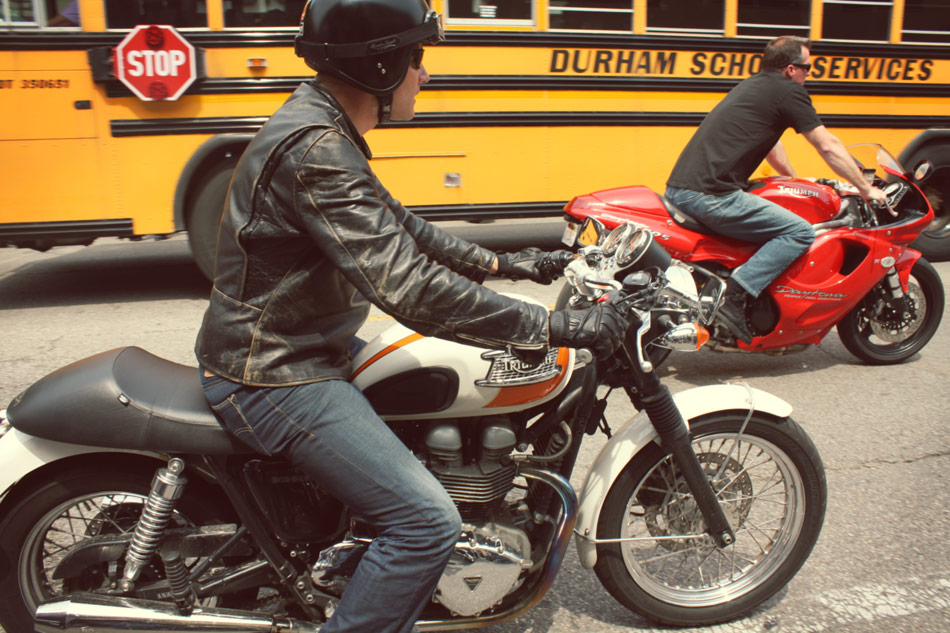 The swooping descender of the logo’s “R” spans many decades and even makes its way into today’s fashion, becoming a well-earned symbol of “cool.”

As the Triumph brand continues to explore current trends and build upon its recent racing success, its heritage has a strong foothold in the minds of motorcyclists.

We’ll never forget the fun of riding on the tank of Dad’s Bonnie as 5-year olds in Southern California. We’ve owned a 60s and 70s model Triumph as well as a couple late model Speed Triples; the brand is engrained in our hearts and minds and we’ll continue to keep an eye on how it evolves. 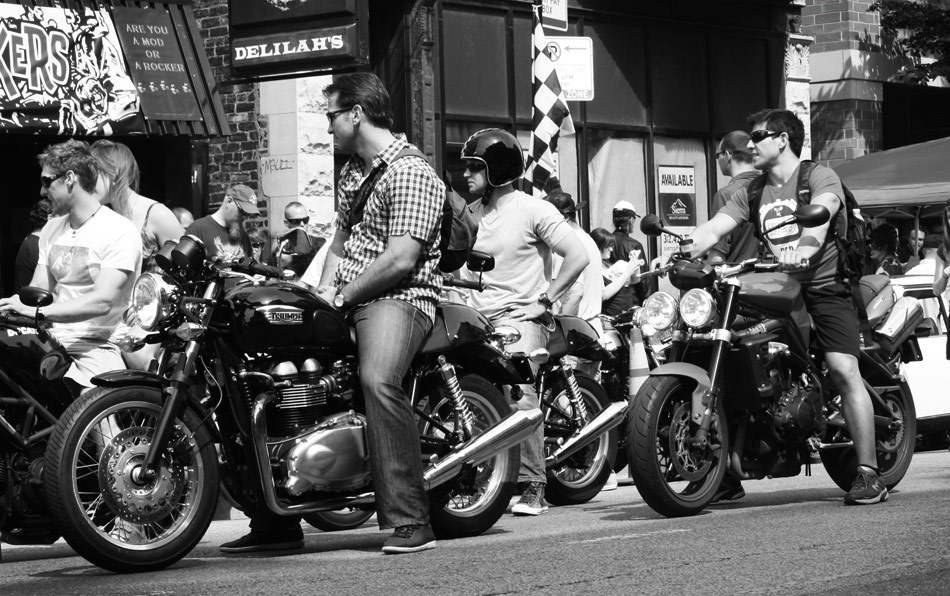 As for the Tiger XC, man, if a guy had to pick a do-everything bike, this would have to be a top choice. Riding it in the city felt empowering with it’s larger-than-sportbike-wheels. Potholes? Broken pavement? No prob. We even pulled an emergency U-turn, bumping over curbs to fetch an errant GoPro camera. 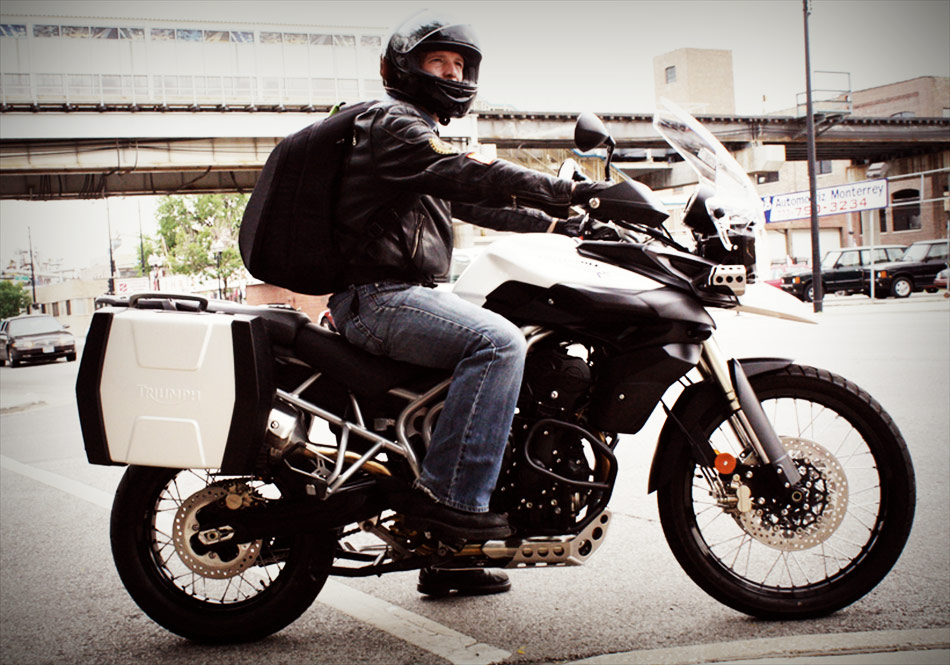 If you’re in the Chi-Town area and looking for a Brit-bike, whether it’s retro or adventure-inspired, go see Johnny and the gang at Motoworks. And, if you’re looking for a top notch summer bike event, mark your calendars for Father’s Day weekend. It’s sure to be a fun time with a healthy dose of Triumphs.

To see more of our Chicago and Mods vs Rockers articles, click here.

Imagine tearing around a board track speedway in this little gem. Back in 2004, this 750cc beastie…

Motorcycling in a post-calamitous, resource-depleted existence requires the right gear. Provisions are low, so we’ve donned…