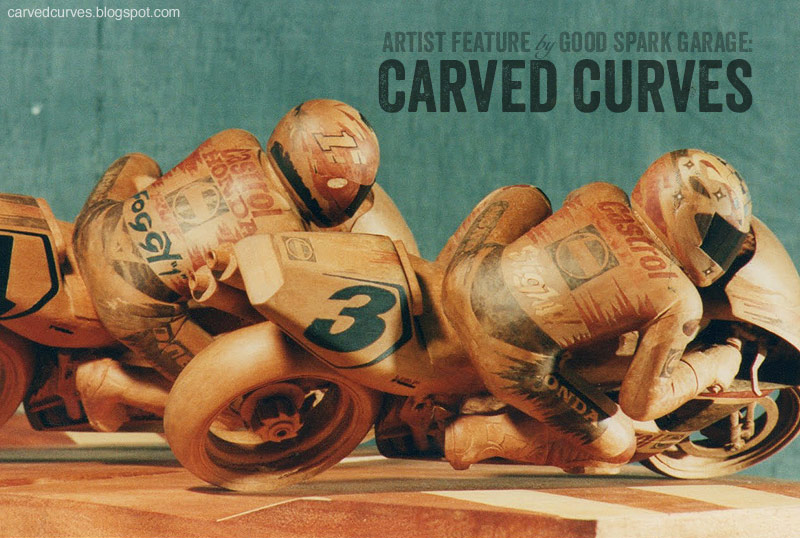 Capturing the beauty and motion of motorcycles in miniature wooden sculptures is a tall order. But Paul O’Neill, a sculptor from London, has achieved success in portraying these roadracing-inspired and meticulously-carved masterpieces. See how he begins from a block of wood and a reference photo, then dials in his works of art. 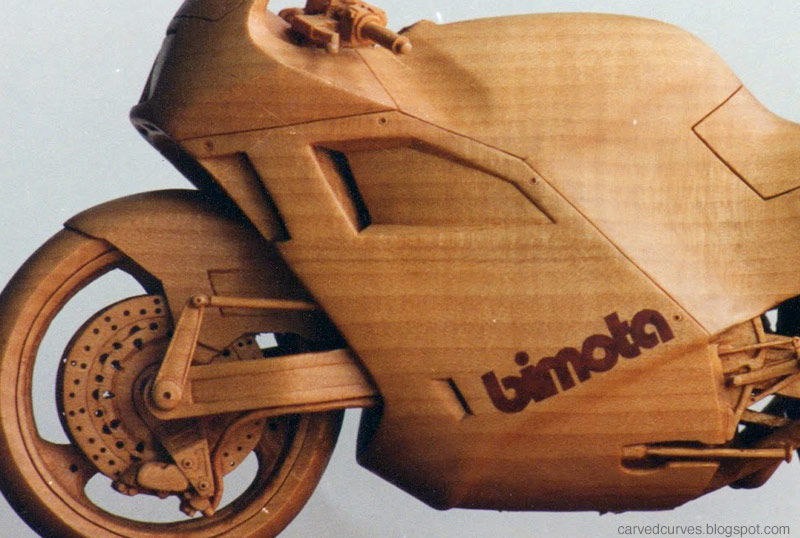 At his blog, Carved Curves, Paul explains his painstaking process and challenges when working in 3D. Above, the Bimota Tesi 1D is carved from Lime wood and the veneer for the logo on the side is Madrona Burr. We like how the grain of the wood in most of his pieces is allowed to show, rather than being painted over. 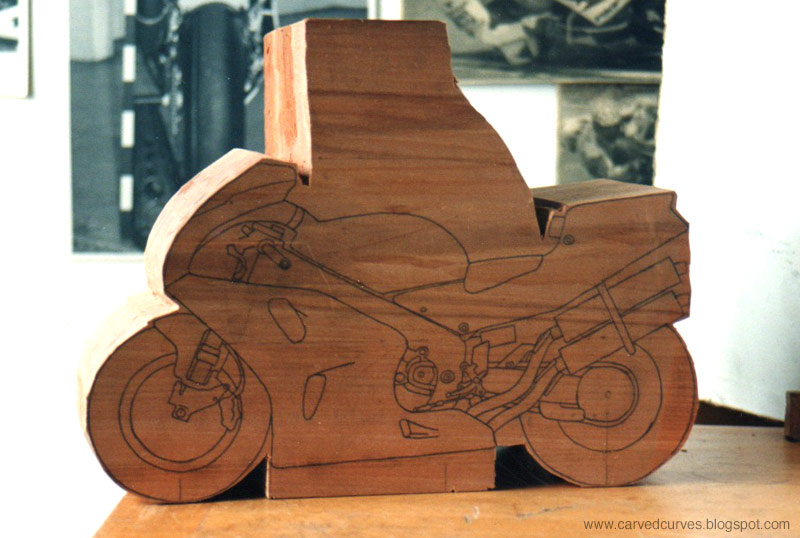 When seeing the final piece, one may think the process is more additive than subtractive. But the motorcycles are carefully drawn on the blocks of wood then slowly whittled away. With a bit of humor, he describes his mental state in the beginning stages:

“I just got on with it, fraught with anxiety at making fatal errors early on, which is very easy to do. Gung ho and accuracy are uneasy bedfellows.” 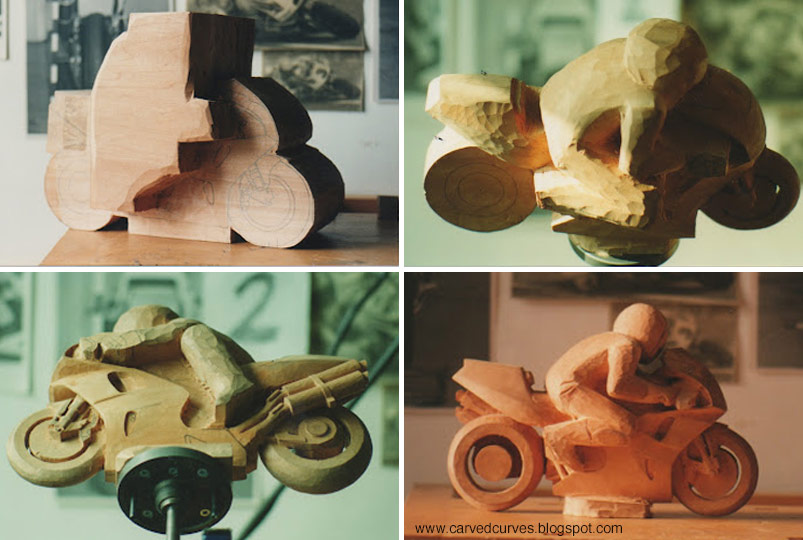 This piece is the Castrol Honda RC45 carved in Lime wood, featuring the rider, Aaron Slight. “The bike has to be carved first to get the thicknesses and component positions right. It would be disastrous to decide the position of his feet or his backside only to later on find them hovering in space.” 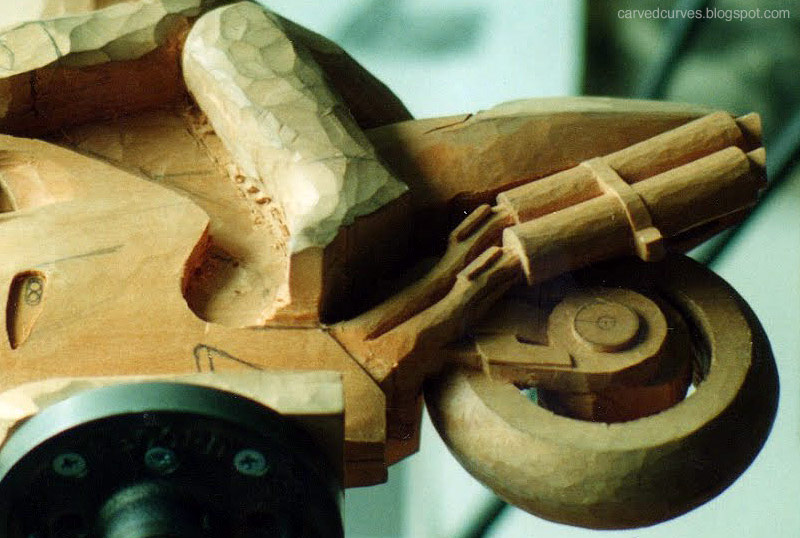 Once the main carving is done, he moves on to veneering. He “digs out holes” then places different color veneers for the details. Commissioned by the Castrol Honda World Superbike Team, this carving is on display at Honda UK’s race headquarters in Louth, Lincolnshire. 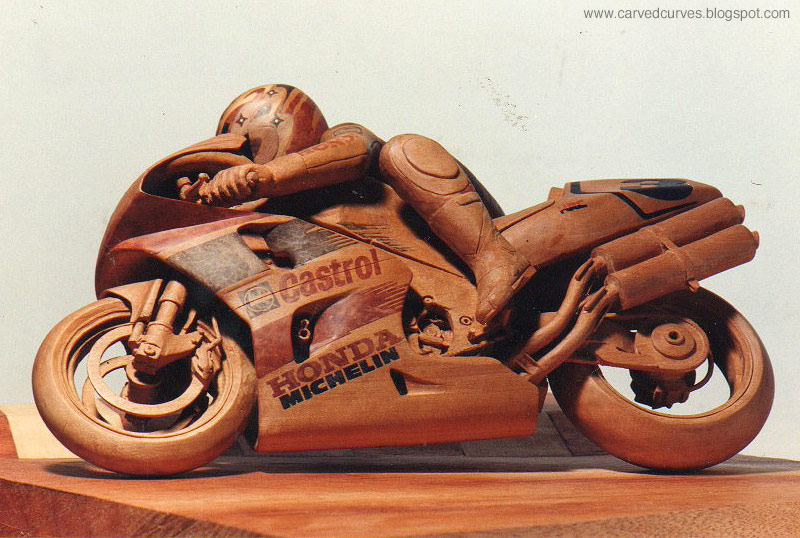 When Carl Fogarty joined the Castrol team on the RC45, Paul was asked to create a similar sculpture to the Aaron Slight piece. You can see how he used photos to reference scale when roughing in the rider. We’re not sure exactly how large these bikes are, but one clue he revealed was that there is a shark rendered on the back of Carl’s helmet that is about 6mm tall (we can’t quite make it out, but that gives us an idea to work with). 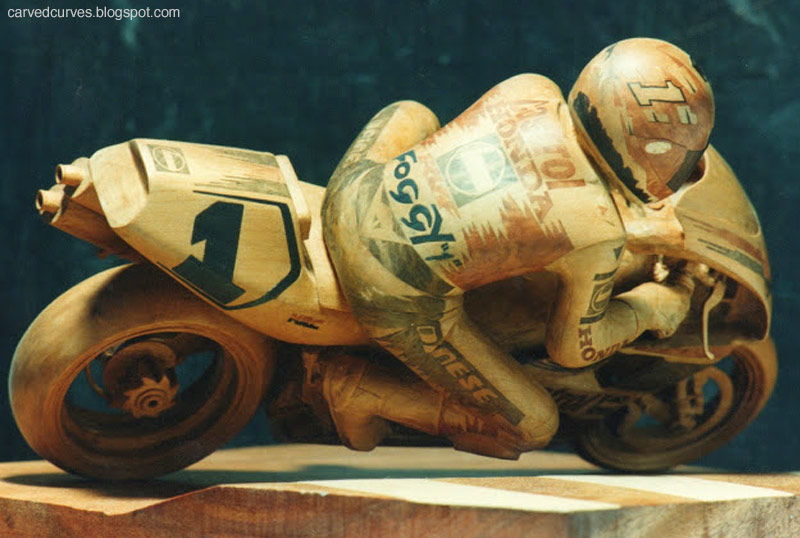 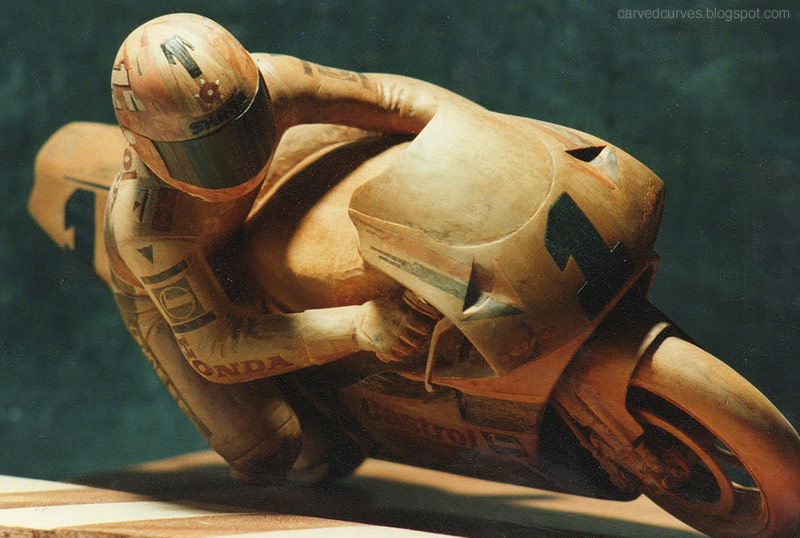 As with his other work, he finesses the final carving and adds the veneered details. After a smooth wet and dry sanding, he adds Danish oil for the final sheen. This incredibly detailed process didn’t happen overnight. See the pics below to see his first ‘go’ at a 3D sculpture of a motorcycle in motion. 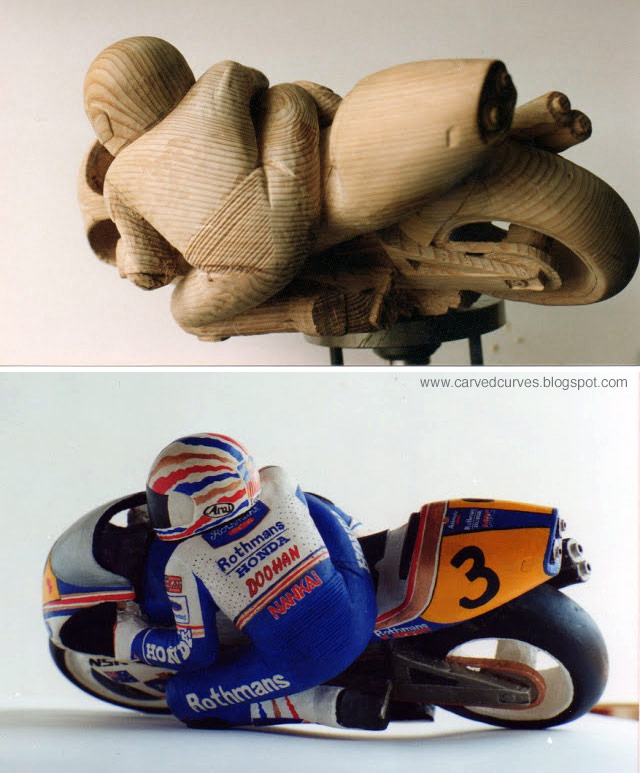 The before/after pics above depict Mick Doohan on a ’91 Honda NSR500. Read here to see how his first-attempt at a realistic motorcycle carving revealed lessons and hurdles that Paul had to overcome on future sculptures. This piece was carved from Pine, which doesn’t allow for clean, crisp cuts as the Lime wood does. You can see how accurate he is able to work the Lime wood in the pic below of Eddie Lawson on a Cagiva C591. 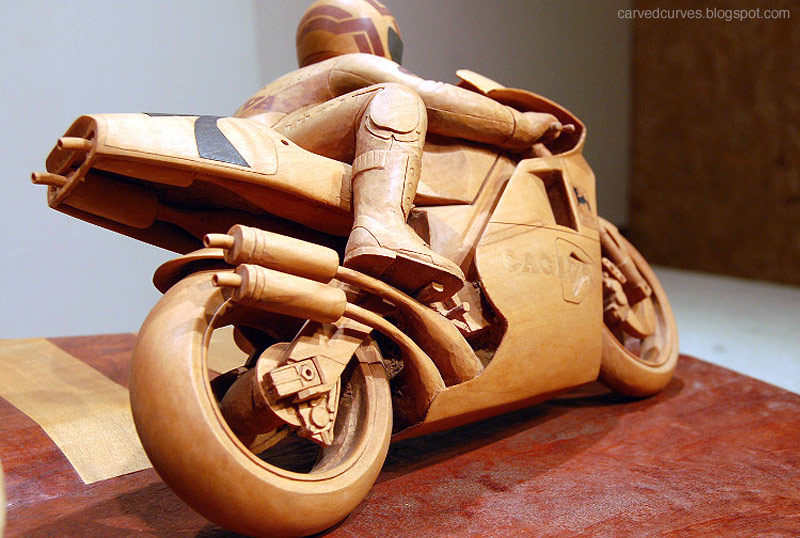 In the series of pics below, we wanted to highlight his attention to detail when carving this Lotus Sport Type 108 bicycle. He used Pear wood, which he says “is lovely wood to carve, much like Lime in that it can hold fine details and has an even grain.” To expand on its qualities, he explains that “it is also quite creamy…a very satisfying feel to cutting through it.” 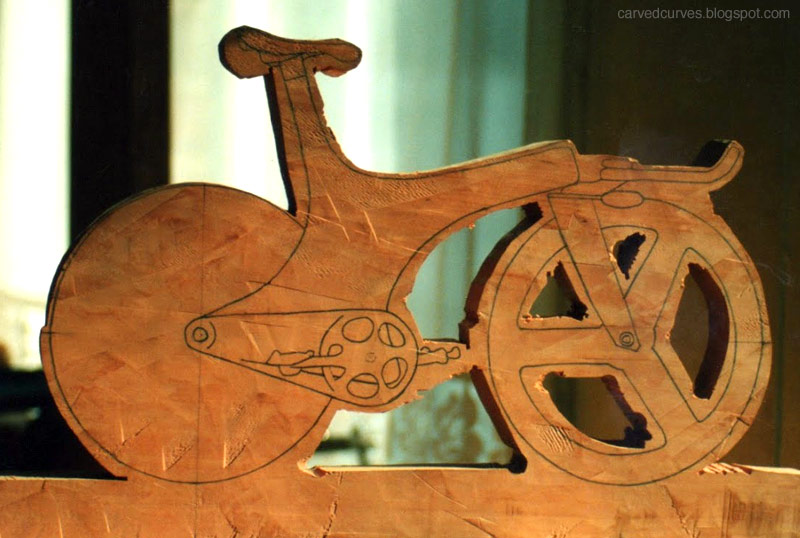 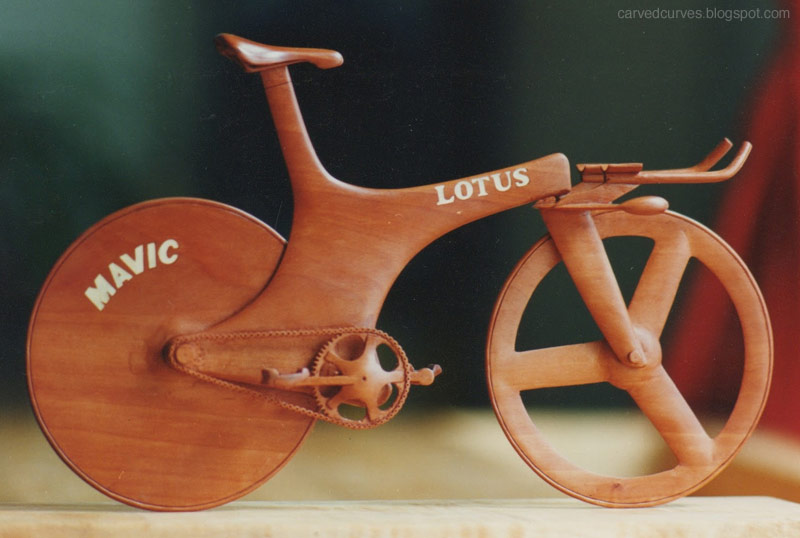 This bicycle sits on a 31cm long Sycamore base and finished with Danish oil, inlaid with Maple veneer. It’s amazing to think of this fragile and highly-delicate piece started as a solid block of wood. 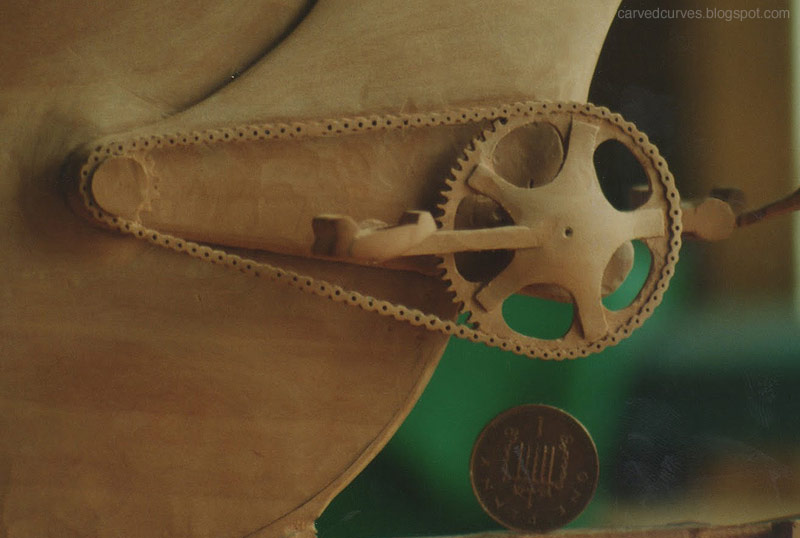 To appreciate more of Paul O’Neill’s work, visit his site and click around a while. We’re certain you’ll be impressed. To see more motorcycle-related art featured here at Good Spark Garage, click here to see the articles all in one place.

Every year, motorcyclists from all over the USA and beyond make the pilgrimage to AMA Vintage…