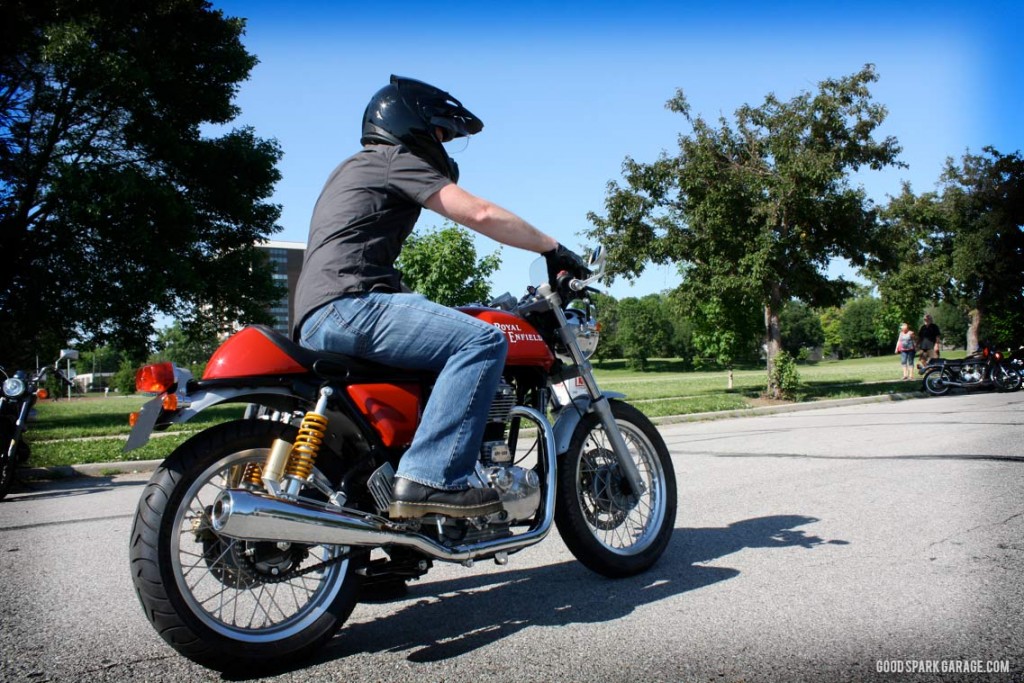 Not long ago, we shared our impression of the Royal Enfield Continental GT. We complimented the amount of appropriately cool nostalgia they packed into the 535cc single and its throwback ‘featherbed’ frame. We were smitten with this mass-produced cafe racer, but we hadn’t ridden it yet. Now we have, and here’s our reaction.

At Rockers Reunion, the biggest vintage-motorcycle event of the year in Indianapolis, Speed City Cycle had two Continental GTs sitting in their booth along with other Royal Enfield models. Shop owner, Mike Tockey, fired one up with the good-looking performance pipes and let Corey take it for a spin.

The ride was long enough to pen a candid, shoot-from-the-hip review. First off, throwing a leg over the Continental GT and sitting “down in it” dispelled my initial concern that I’d feel like a bear on a bicycle. I’m about 69-inches tall (1.75m) and sat flat-footed (look at these pics and gauge your height accordingly). The bike felt light and nimble, but weighty enough to feel like a capable, solid motorbike. 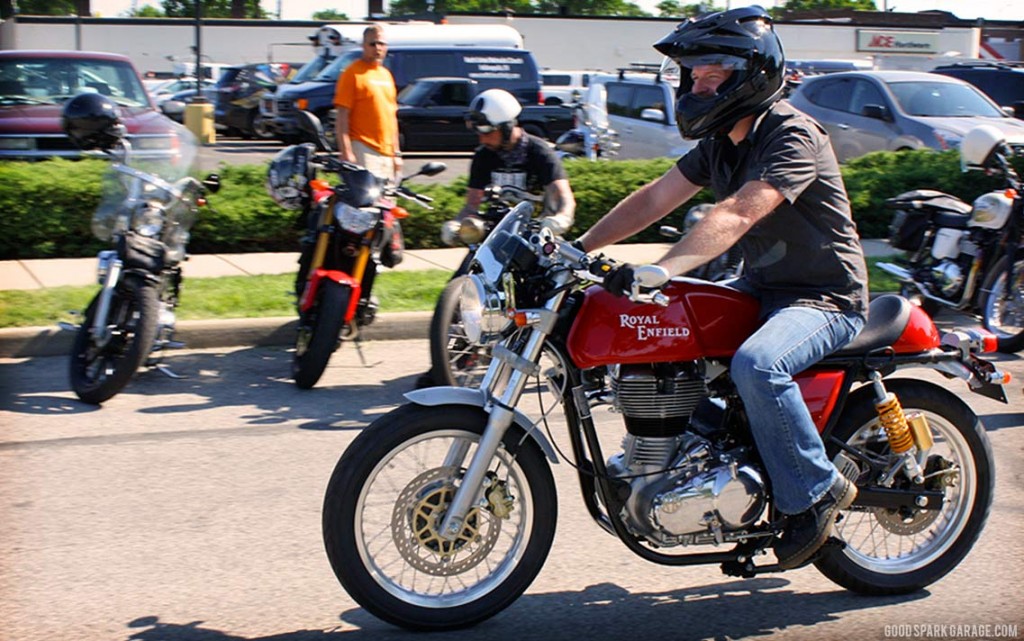 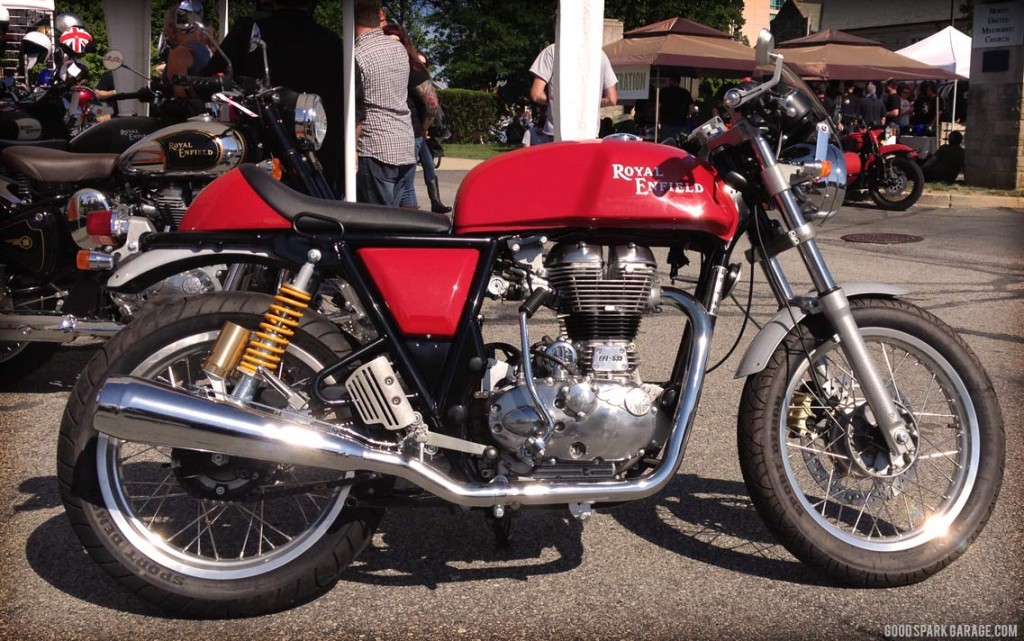 Those older Euro bikes with leaky seams and clunky bits look incredible; their visual aesthetics still hold up today as examples of beauty and design. Fast forward to today and the Continental GT turns heads just as quickly. What onlookers won’t know is that it’s a smooth-shifting motorcycle with an effortless clutch-pull and a one-finger front brake. Even with near-30 horsepower, the engine pulls just fine. We’ve heard some reports of lackadaisical power, but that’s relative isn’t it? From my perspective, it had plenty of grunt and structural stability to blast the unpredictable urban asphalt. At one point, I made a quick U-turn on a bricked side-street and throttled back out into the swift current of city traffic with confidence.

Casey and I have discussed at length how cool it’d be to take two of these bikes and tour old diners here in the Midwest; an American spin on Rockers traveling from caff to caff. Once out of the city, the calm-but-throaty 535 thumper would settle down nicely for a cruise and soak up the bumpy back roads. Its stance and ergos easily allow for quick over-the-shoulder traffic checks and long periods of leaning against against the wind in comfort.

When we refer to this as a thumper, don’t think of a brappy DR650 or a big-bore dirtbike. The throttle response feels bigger, more lopey and capable of longer strides. It has plenty of oomph to blitz the twisties. We’d be absolutely fine with what it offers in stock form, but I’m sure a few mods could increase top speed and quickness. 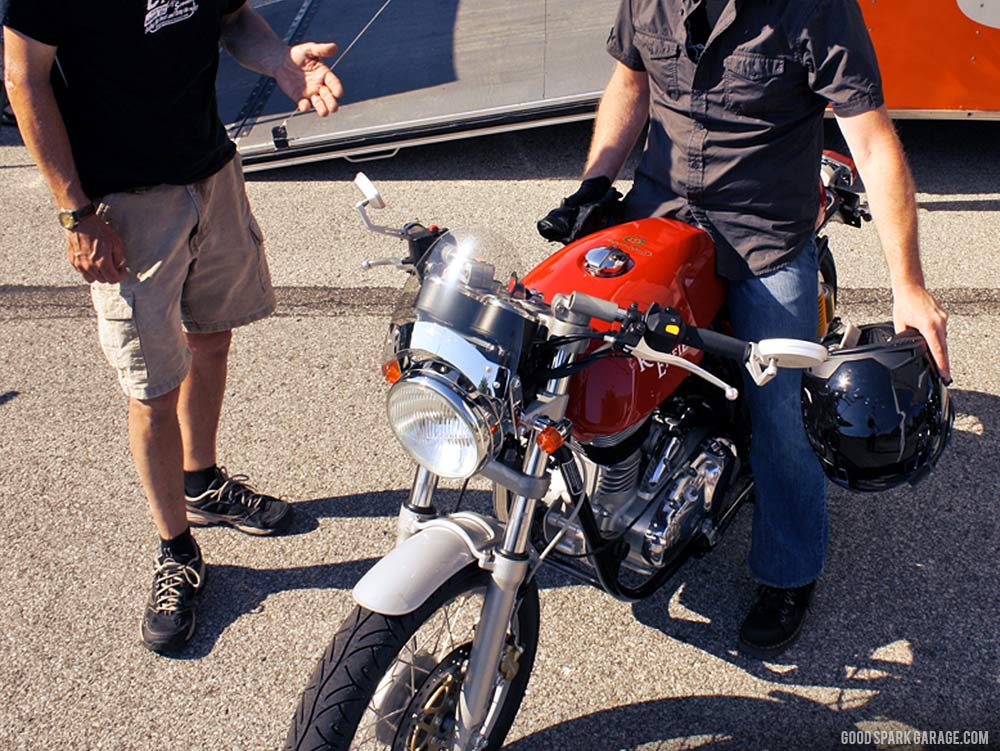 Royal Enfield has taken a risk at what could’ve been viewed as a novelty, fad-based project and created a proper homage to an era when motorcyclists placed a lot of pride in their bikes. Whatever the sticker price is at the time you read this article (it’s currently $6K USD, give’r take), some will say that’s too expensive. Of course, many won’t bat an eye. We’d bet, though, that folks will get their money’s worth out of the Continental GT. I like what I see, like how it feels and respect its potential for fun. Bottom line: I’d ride the heck out of it.

The Speed Union at Restoration Werks

Driving down into Louisville, we're quickly enamored with the old buildings lining the Ohio River. Headed…