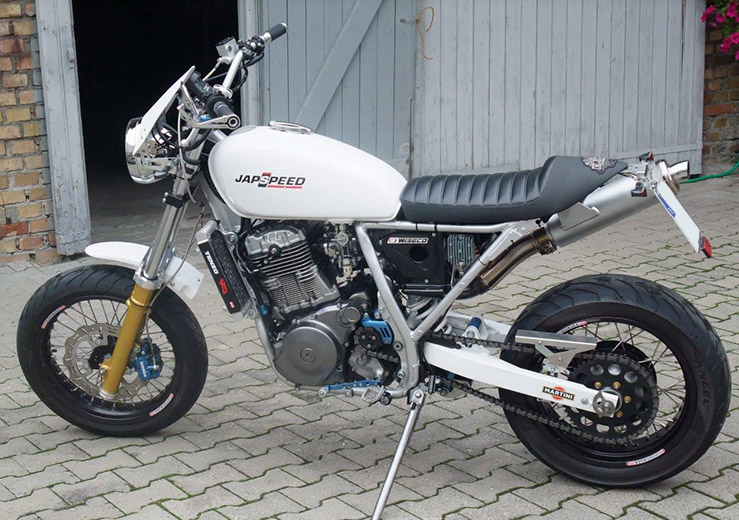 Volker Schmidt’s custom conversion of a DR 800 Big grabbed our attention and held it for a good while. We Yankees seldom see even the stock version of the “big” Suzuki enduro, so it was cool to see such a twist on what is already an intriguing bike. Read on to see what inspired this unique German build. 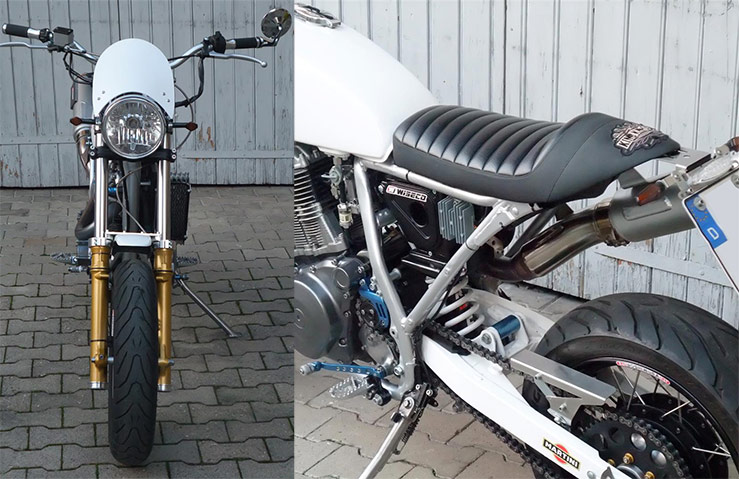 Volker says he thought the big single-cylinder “deserved better than to toil in an obese enduro.” After some adjustments, he fitted a 12-liter Yamaha SR 500 tank and added the cafe racer seat (which also required various adjustments). The black supermoto wheels really set it off. Its 3.5 x 17 front rim is shod with a 120 tire and the 4.5 x 17 rear rim with a 150 tire. Most cables have been painstakingly hidden after a completely new approach to the lights and signals.

A new brace was added to the forks, which were upgraded with Wilbers springs. (Those legs go alll the way up.) We wish we could hear the thumpy tune of its new stainless steel exhaust. Volker says the bike weighs in at 170Kg (approx 375lbs), making it a blast on the nearby winding country roads.

“All in all, it takes a little brain power to fit everything together, but I’m happy with the result.” 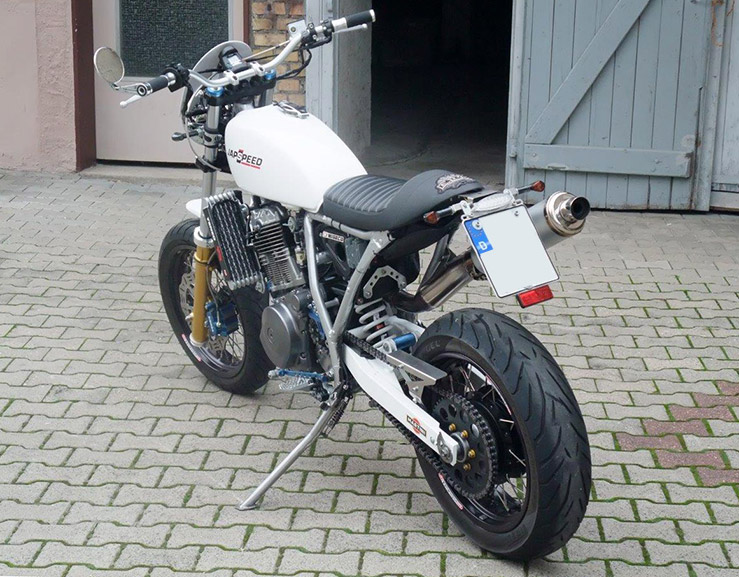 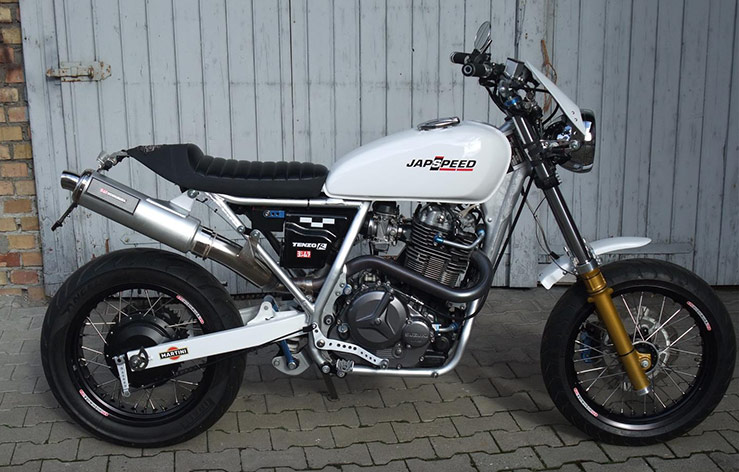 If you’re wondering about its name, it was inspired by a Japanese auto parts supplier which, Volker opines, “the name suits the bike.” The frame from the above build is from a 750 and the motor was taken from an 800 (Suzuki made two variations, a 750 and an 800 S). 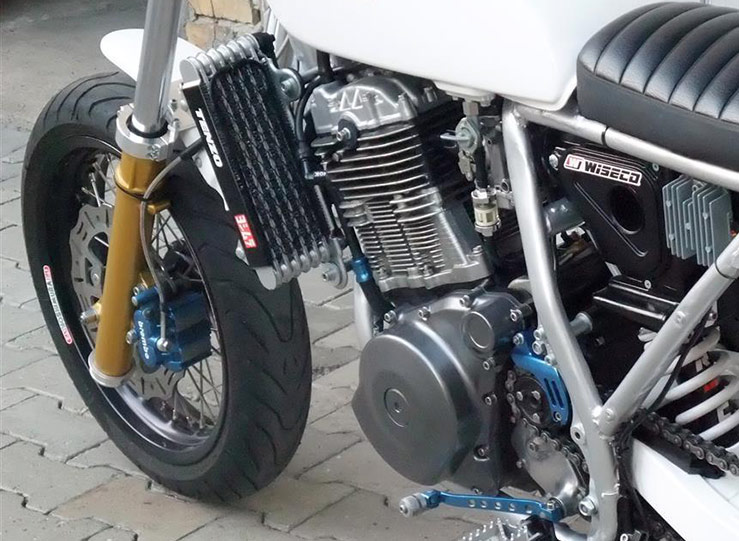 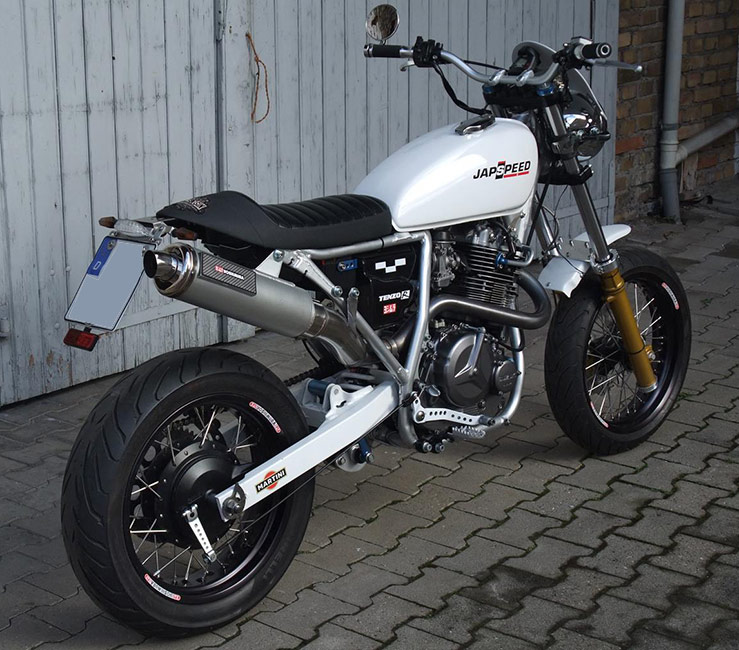 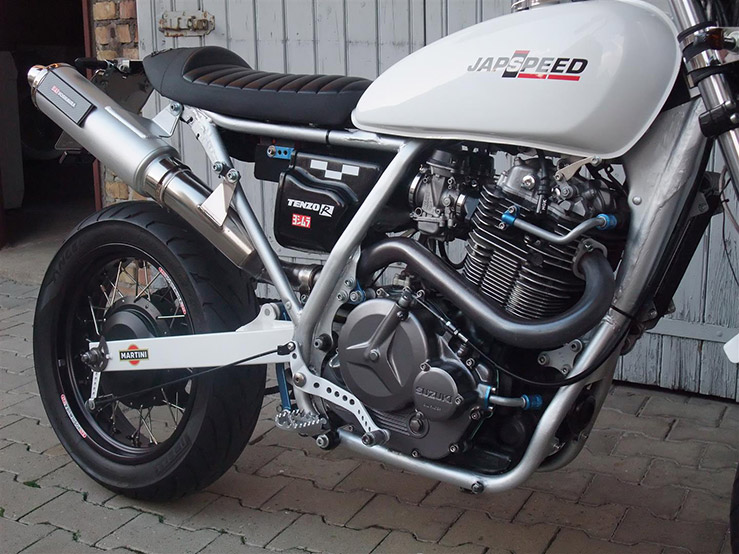 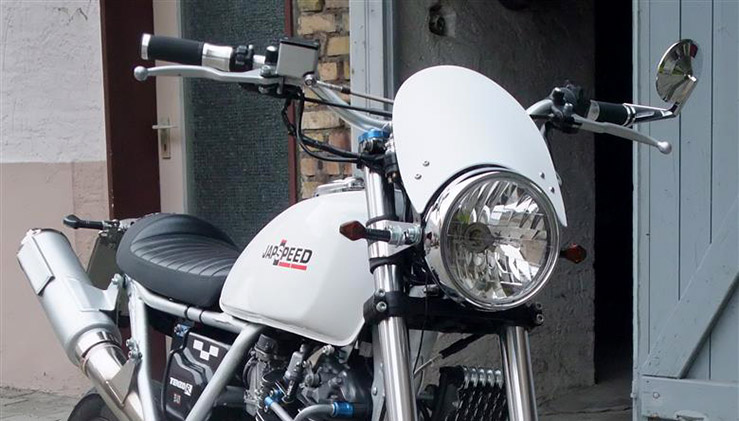 If you think this custom is cool, how ’bout another one? Yep, he actually built another DR Big that retains more of its enduro roots (below). Both bikes are garage-built – in his garage.

Volker explains, “I live in a gentle hill country (Oppenheim, near Frankfurt) with many vineyards and small roads. Here you can use both bikes.” We’re sure it’s nice to have a couple of these beasts to choose from. Both bikes use the 779cc powerplant of the DR 800, putting out over 50HP. 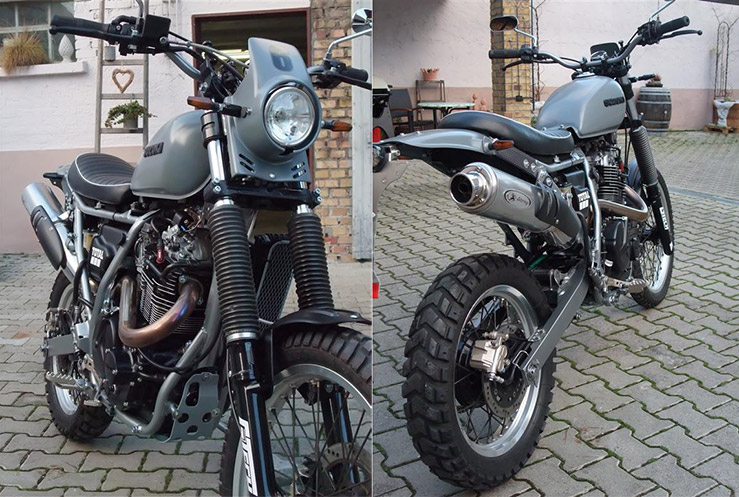 It’s great to see a new spin on something that maintains a high level of functional fun. Sure, the stock Big is neat with all its angular plastic, but we like where Volker’s vision led him. Which one would you choose to rip up the backroads?

The weather is warming up in the Circle City, time for the annual Rockers Reunion event…