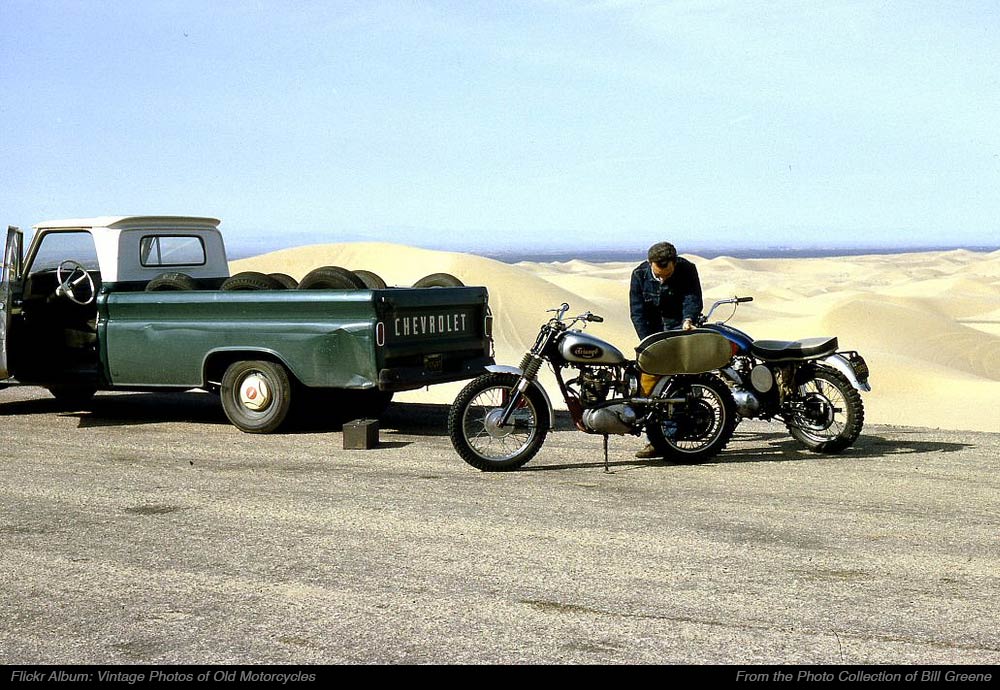 Ever stare at an old pic and wish you could jump in during that very moment? Each time we’ve sifted through Bill Greene’s collection of vintage motorcycle photos, and it’s been many times, we’re taken back to a time when British motorcycles and early dirtbikes swarmed the mixed terrain of Central and Southern California. Since 1949, Bill’s father (Bill Greene III) immersed himself into motorcycling and thankfully documented his and his buddies’ adventures with the pics you’ll see in this post.

Bill says a large portion of the collected photographs were recorded during the mid 1960s to about 1970. “In 1971 we moved to San Luis Obispo where my father bought a Yamaha dealership. In the 1960s he’d go out to the desert and race hare-and-hounds, or enduros, on the Triumph 500s he rode then.”

The Greene family and friends would frequent the sands at Pismo Beach, Oceano Dunes and Kelso Dunes. Looking through the pics of the Mojave Desert, mountains, dry lakes and rocky foothills, it’s obvious how this region became a motorcyclist’s paradise.

In 2014, Bill’s father (pictured above in ’51) will turn 80 and he’s still riding, enjoying wherever his Yamaha XT250 takes him. Here’s to many more years of exploring and adventures ahead! Take a look through the rest of Bill’s photostream here and prepare to be pulled into a nostalgic vortex you won’t wanna escape.

A big thanks to Bill Greene, for allowing us to share these photos and for taking the time to scan and post these wonderful vignettes of motorcycle Americana. You can view more cool imagery and a photographic window into Bill’s world via his Flickr site.

John Penton and His Motorcycles

If you've got kids that are into motorcycles, take a moment and introduce them to the…