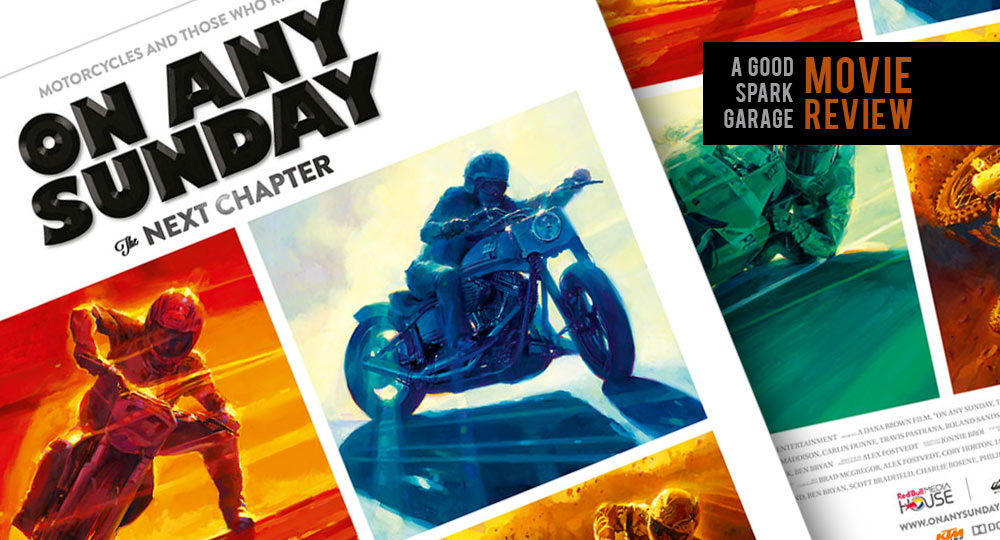 While watching On Any Sunday: The Next Chapter, you’ll be grinning most of the way through. There’ll be some chuckles, a few nods and audible exclamations. At other times, your eyes will be wide with wonderment and maybe even well up once or twice. The “Brown” brand of storytelling is firing on all cylinders here and we loved every bit. Bonus: We were very fortunate to have had the opportunity to talk with Dana, in person, before and after the film. Read on for our review…

There’s a richness in the overall presentation that goes beyond the incredible color and cinematography. If you’ve never seen the original On Any Sunday (1971), don’t worry, it’s not a prerequisite (but watch it, man!). If you’ve seen Dana’s Step Into Liquid (2003) or Dust to Glory (2005), expect the same kind of warmth and dig-deep insight into the emotional pull of motorcycling. Below is a breakdown of why we believe you’ll dig this film:

If You Liked the Original OAS:
If you liked Bruce Brown’s original window into the world of motorcycling in America, you’ll like Dana Brown’s approach on the status of motorcycling in America AND beyond. In both, you’ll hear clean storytelling (no ‘sex-sells’ elements, no vulgarity) and human interest aspects that families can enjoy together. We loved seeing a few instances, lasting only a few seconds, that paid homage to the original. We’re certain Dana was giving a nod to Bruce when showing a close-up of a motorcyclist breathing out in comical slo-mo. Less subtle similarities are the laugh-inducing moments that most editors would cast aside as an unusable trip-n-fall blooper in the Bonneville pits.

The People:
After the screening, some members of the audience stayed well after the end credits to talk with Dana. We walked over to Nancy Brown, his sister, who helped during the production of the film. We told her it was clear the subjects they interviewed were very comfortable with who was behind the camera. She smiled and pointed over to her brother;

“That’s Dana; he has a way of making them feel comfortable.”

She mentioned how their crew was small and they respected the time they were allowed with people like MotoGP stars, Marc Marquez and Dani Pedrosa. This, along with Dana’s demeanor, helped the guys drop their guard and open up. As for two other featured riders, the multi-talented Carlin Dunne and modern-day daredevil Robbie Maddison, Nancy said “we’ll be friends for life,” remembering how nice and accommodating they were during filming.

The film features folks who have proven involvement and influence in many different moto-disciplines. And, while there were a few characters from today’s in-crowd, like Roland Sands, their passion was the focus rather than an ego showcase that many content generators pursue. Outside the glitz and glamor of commercially-backed racing, the Riders for Health segment helped add a humanitarian element to the film. Overall, the movie lacked the popular bravado and showy personas; we dig that.

Emotional Aspect:
When you ask a motorcyclist why they ride, you might hear the words, “I don’t know, its…” as they look off to the side. They’re searching, but can’t quite find the exact combination of words to express what exactly it does to their psyche. But in OAS: The Next Chapter, the emotions attached to motorcycling are wonderfully and visually captured. The beautifully edited segment of motocrosser Ashley Fiolek and her dad, Jim, illustrates how the sport strengthens relationships and plays an integral role in many families. There are even heartwarming and playful scenes showing how Doug Henry’s perseverance and tenacity after paralysis makes even Travis Pastrana feel protective and (relatively) concerned with safety.

The emotions attached to motorcycling are wonderfully and visually captured.

Soundtrack:
Appropriately picked and rockin’ at times, the music will make you wanna Google the tracks used in this documentary. We did, and haven’t found a track-list just yet, but we’ll be looking for it. We own the original OAS soundtrack, full of its infectious Frontiere funk, which was more of a themed collection. The Next Chapter has more of an eclectic mix, from classic rock to a yodeling ditty. The songs all fit nicely.

Red Bull Bent:
Admittedly, we thought this was going to be more of an obvious commercial effort that spotlighted Red Bull products and athletes. We have to tip our helmets to Red Bull Media House for backing this effort and letting Dana Brown do what he does best as well as doing what they do best. Sure, it’s packed with sponsors and there are thousands of people that could’ve been featured who have no affiliation with the brand, but Red Bull’s credibility and sponsorship has opened doors and granted top-notch access to allow for killer footage. We have to thank RBMH for helping a motorcycle movie like this appear in the mainstream, especially on the marquee of our local theater. 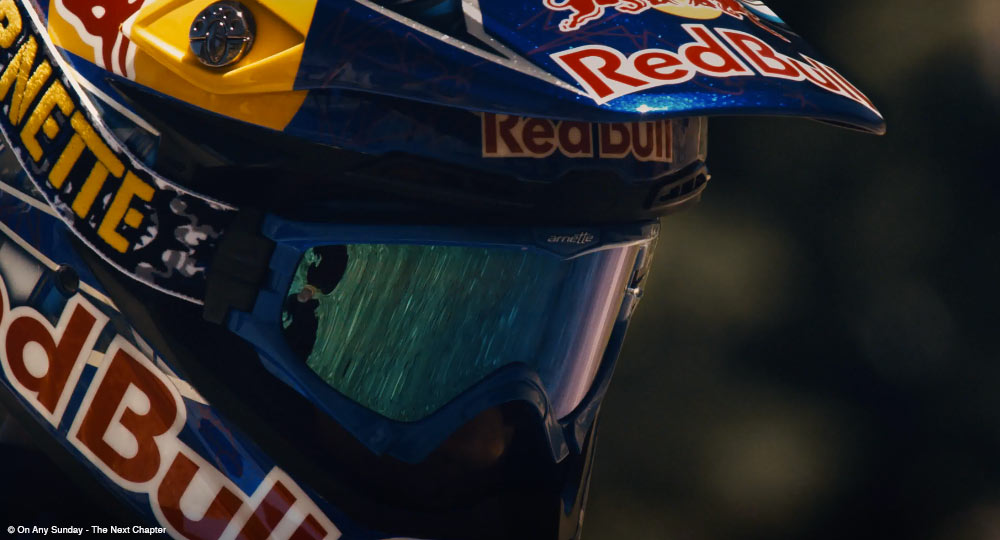 Should You Go See It?
Short answer: Yes. We’d give it a 5 out of 5 stars. Long answer: If you want to spend a couple hours living vicariously through motorcyclists who’ve dedicated their lives to the sport, you’re in for a treat. If you have kids who can’t get enough of motorcycles, they’ll love this. If you’d like to watch something that doesn’t smack of in-yer-face, trash-talking, angst-ridden content, this is for you. If you don’t ride motorcycles, no prob; this is about overcoming challenges, building relationships, loving what you do, fighting for what’s right and, maybe most importantly, having fun.

A Quick/Cool Note About Dana Brown:
We were fortunate to have Red Bull set up a night where Dana could attend the national theatrical launch of On Any Sunday: The Next Chapter here in Central Indiana. He made stops at the Indianapolis Motor Speedway and the Bob & Tom Show, then over to well-stocked Westfield Powersports to shake hands, talk and take pics with folks. He shared stories with a smile and didn’t once show any signs of needing to split. He talked to our sons and respectfully talked about his dad. Perhaps most impressive, when Jesse Johnson of Westfield Powersports offered him a motorcycle to ride down to the theater with a group of guys, Dana donned a jacket and threw a leg over a new Honda Valkyrie. After the movie he sat and answered questions for a good while, then hopped back on the bike for the ride back. Gotta give this Southern Californian props…it was 37 degrees that night.

A big thanks to Dana Brown for his time and to Red Bull Media House for making this evening happen. Another big thanks to Jesse Johnson at Westfield Powersports for hosting the evening and inviting us out. Click here for movie show times.