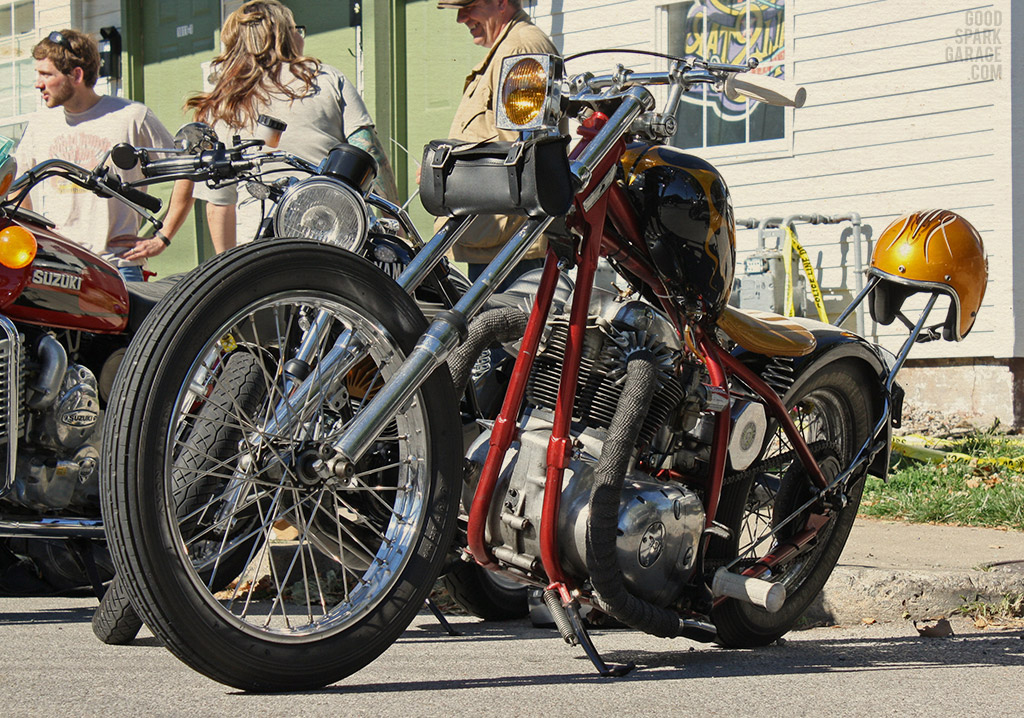 Barret Bar and Monkey Wrench, a coupla bars located across the street from each other, shared host-locale duties for the many motorcyclists and vintage bike fans who showed up for the first Kentucky Kick Down. Read on and check out our pics for a mere taste of this southern, gritty and happenin’ motorcycle event in Louisville. 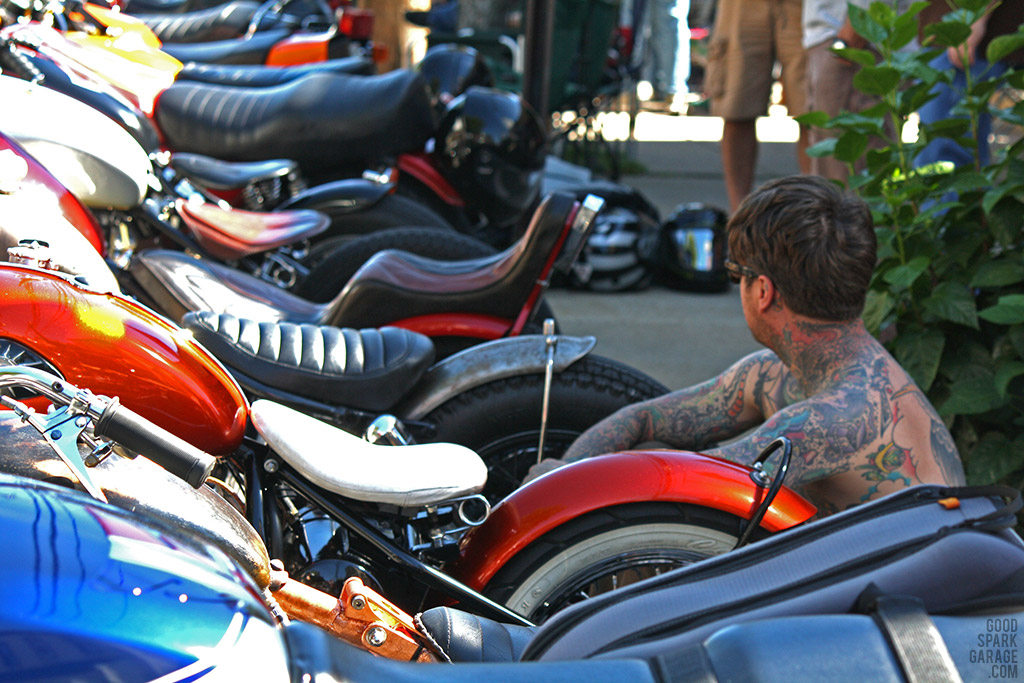 Five bucks got you in as a spectator to walk among the 100 or so bikes in the bike-show area on Barret Ave as well as the vendor area and food trucks. You could register your bike on-site for $30 (1988 and older) if you wanted to park in the middle of the action, but you could park for free along the bordering streets and parking lots around the show.

The weather was perfect. The kind you’d expect in mid-September, where it’s jacket weather in the morning and T-shirt weather at noon. Our first impression of the neighborhood is that it’s well-worn, like it hasn’t changed much in a few decades. That’s not a chop, it’s got an appropriate charm for a vintage bike show that attracts oil-stained bobbers and earthy choppers. The people seemed nice, hospitable and chill. 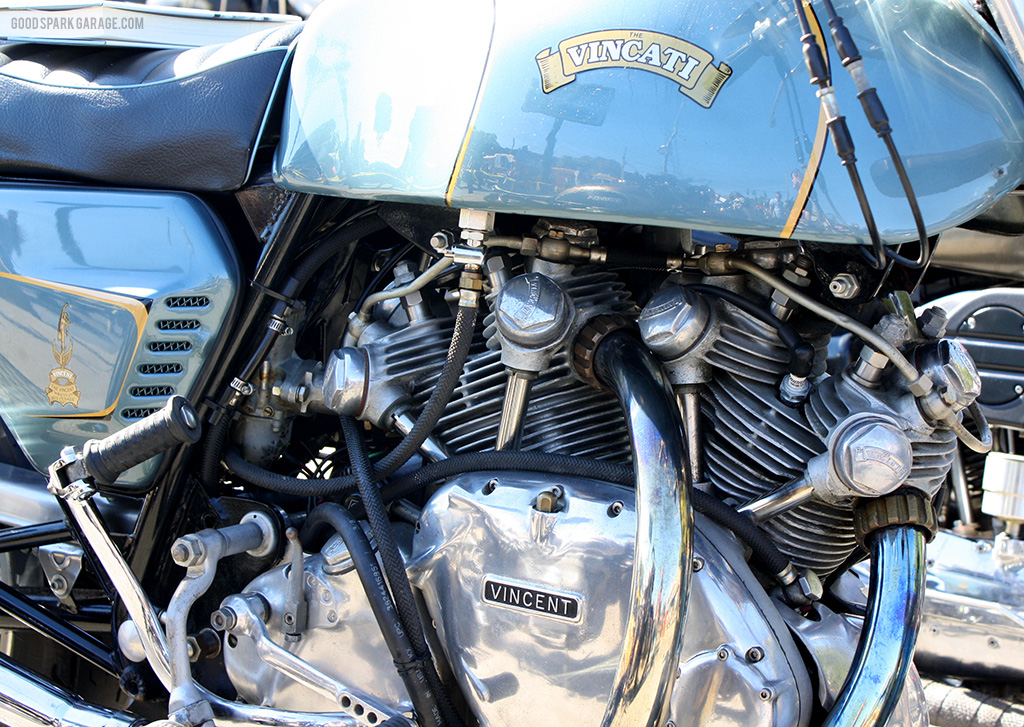 Of course not all bikes were greasy. Case in point, Big Sid’s (RIP) Vincati made an appearance, adding some polished, fine-tuned character to the street show. 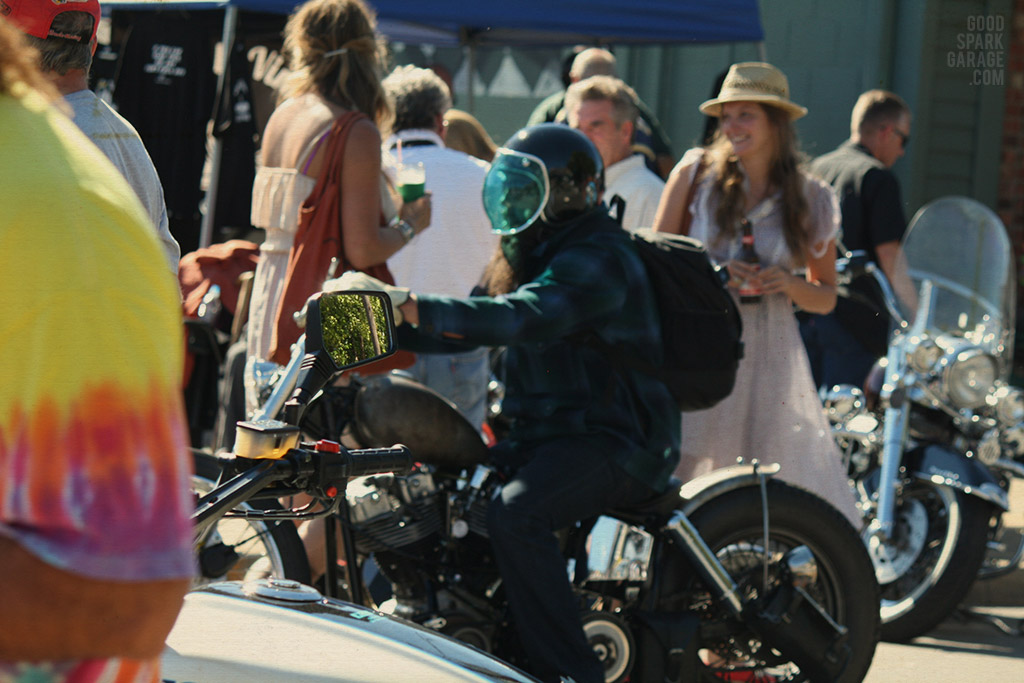 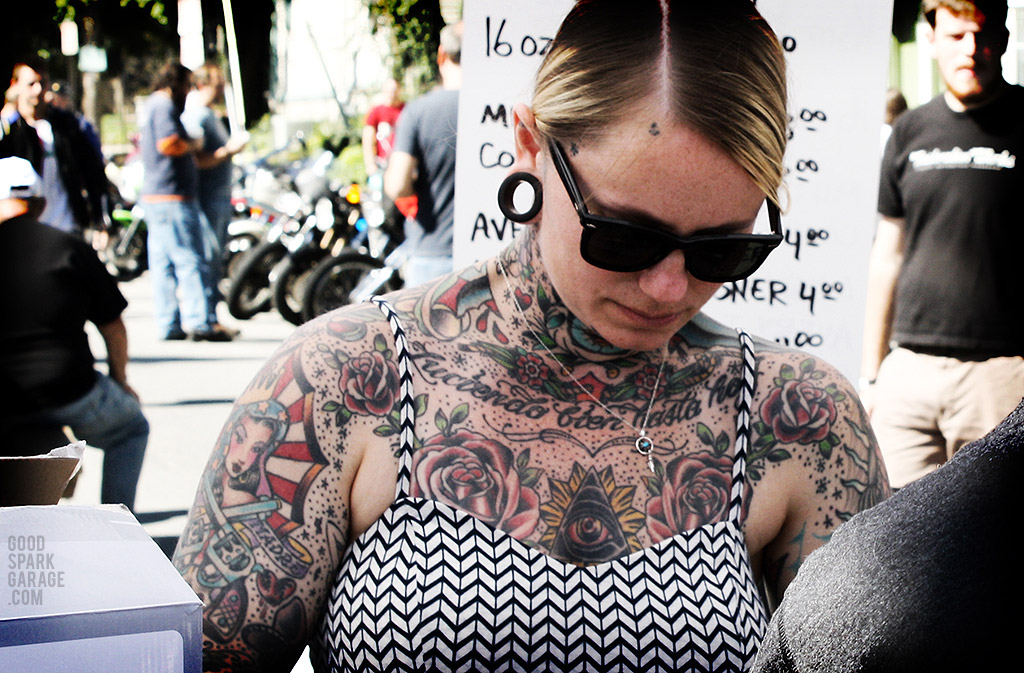 As with a lot of events we attend, we enjoy the people watching. Inked people, old-timers, families and fashionable folks from all walks of life could be found here, adding the color and character that make it worth the trip. 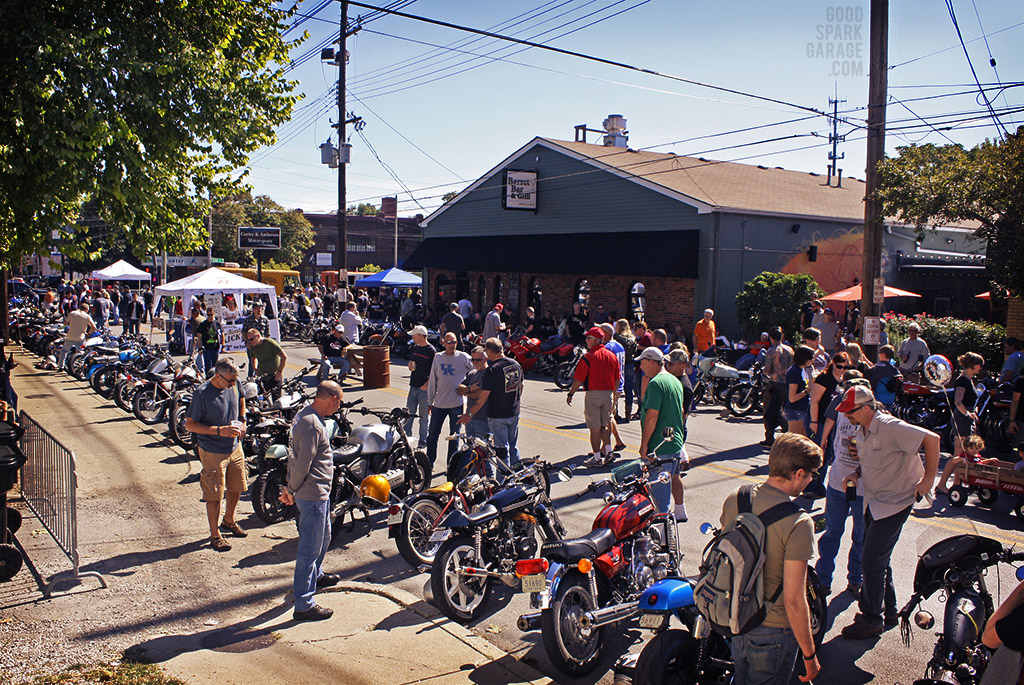 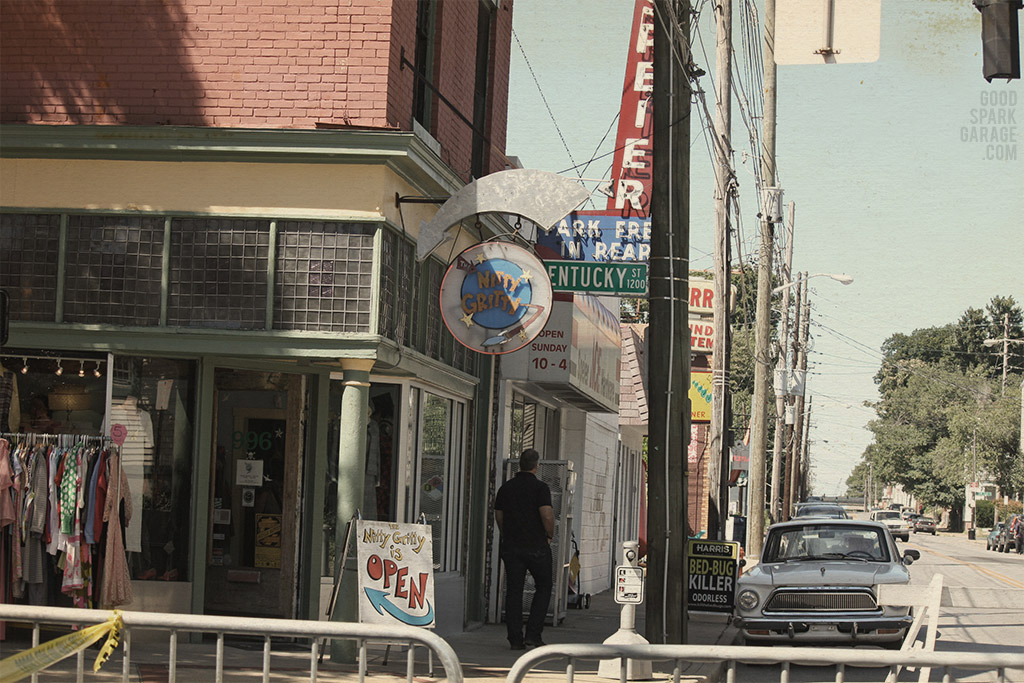 This scene (above) looks like it could be pulled straight from the 60s Louisville archives. This is looking north on Barret Avenue from the bike show parking area. The guys behind the KKD did their homework and seem to have put in a big effort in prep work. They also made some cool belt buckles that acted as the trophies (below). 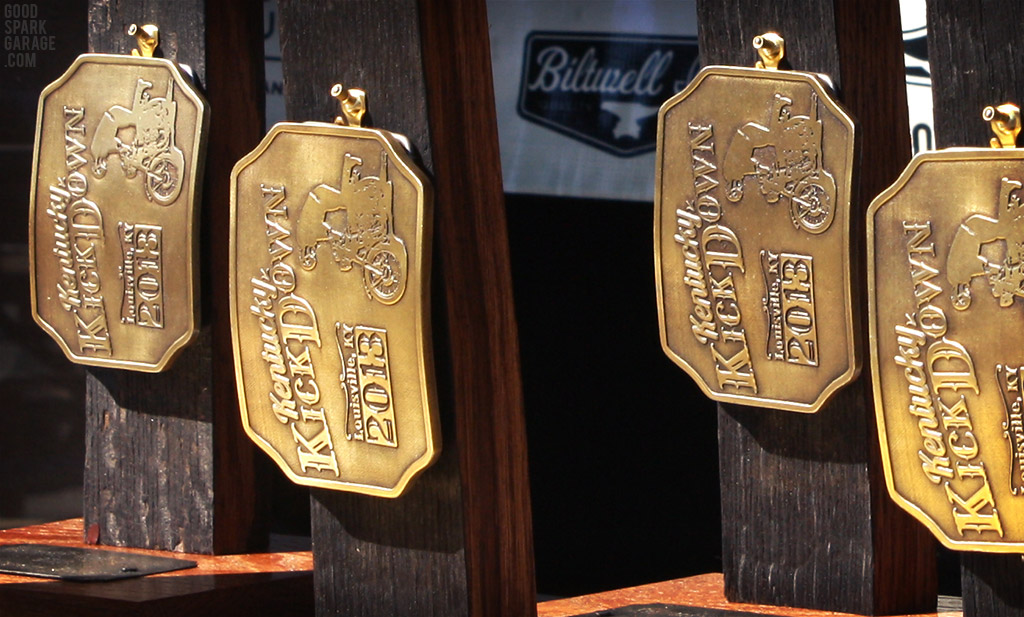 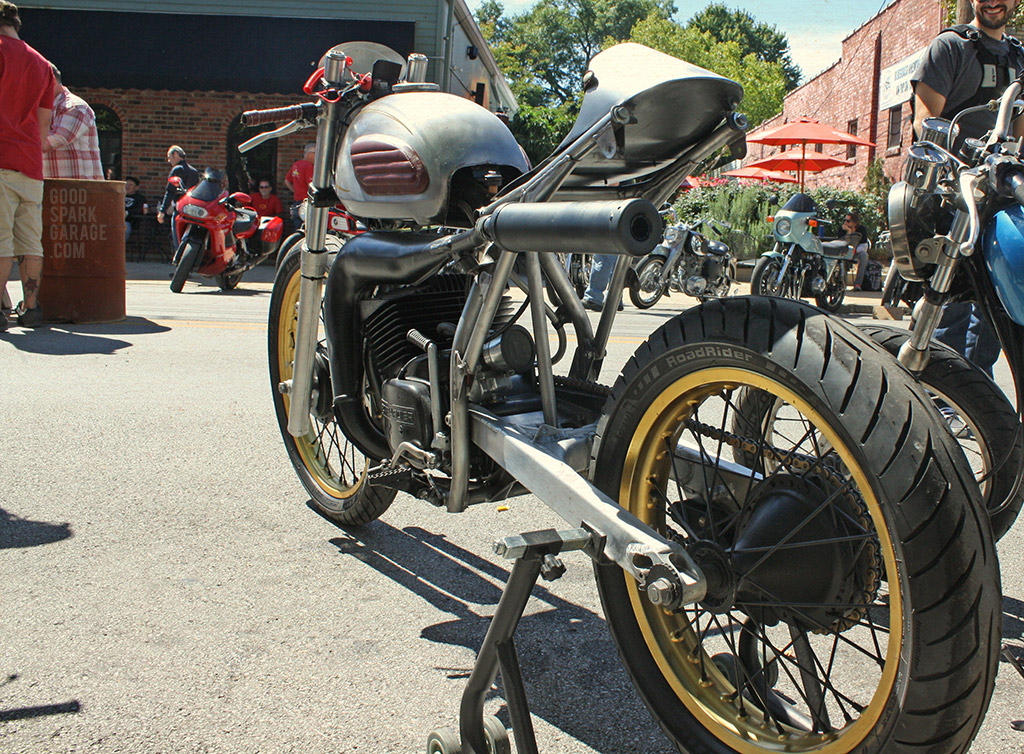 All kinds o’ bikes to see there, like this little Bombardier-powered custom Can-Am. Wonder what category the owner put this in. 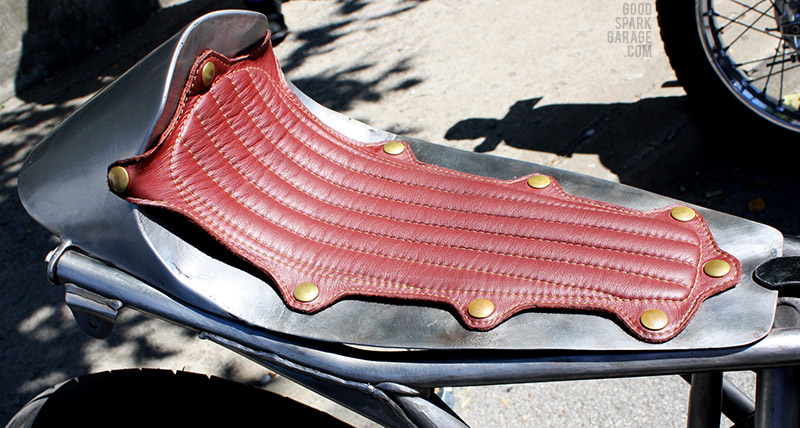 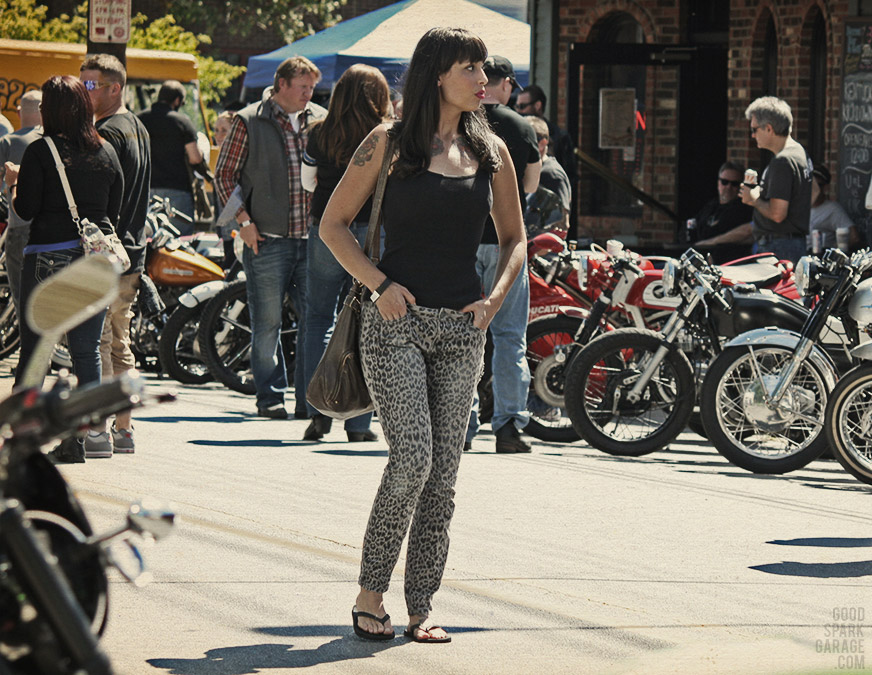 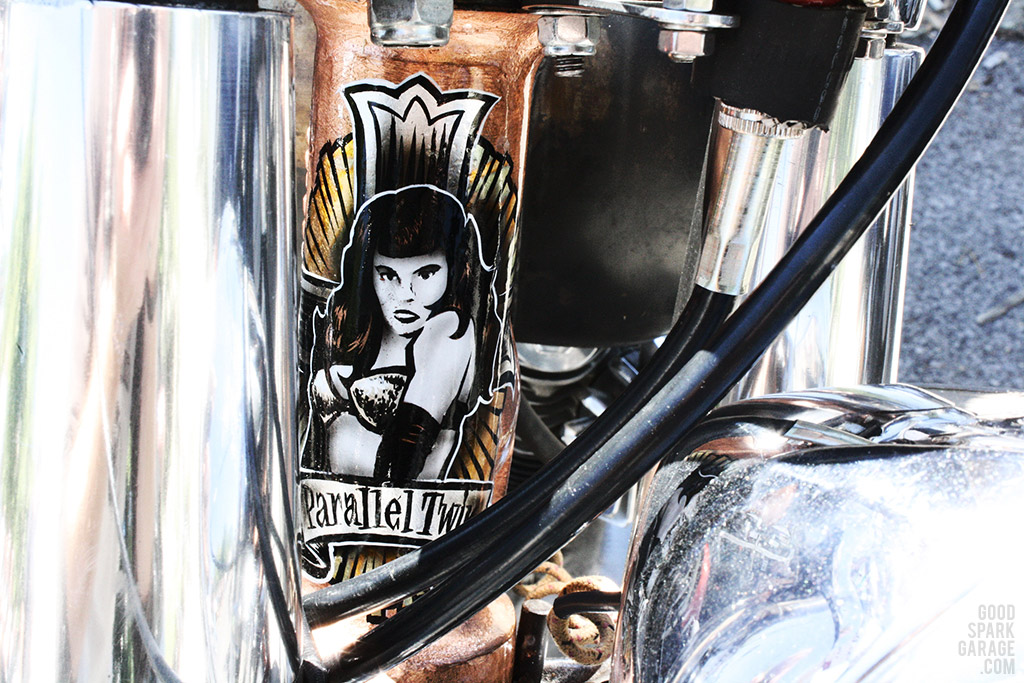 Sometimes, you gotta look a little closer to see how a motorcyclist has added their personal touch to their bike. It’s a form of art and expression we dig. 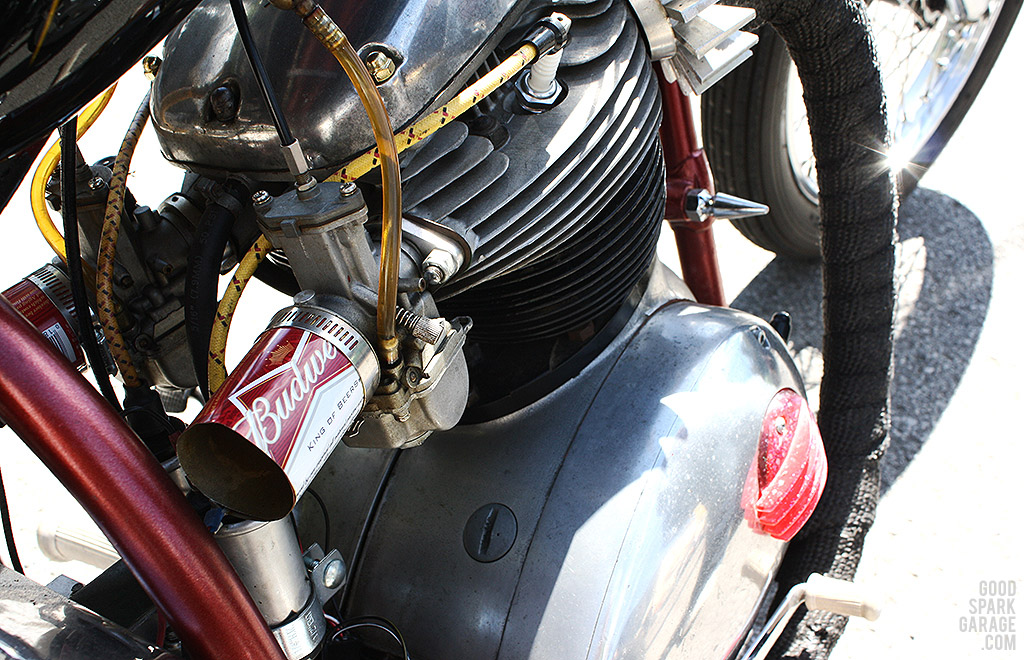 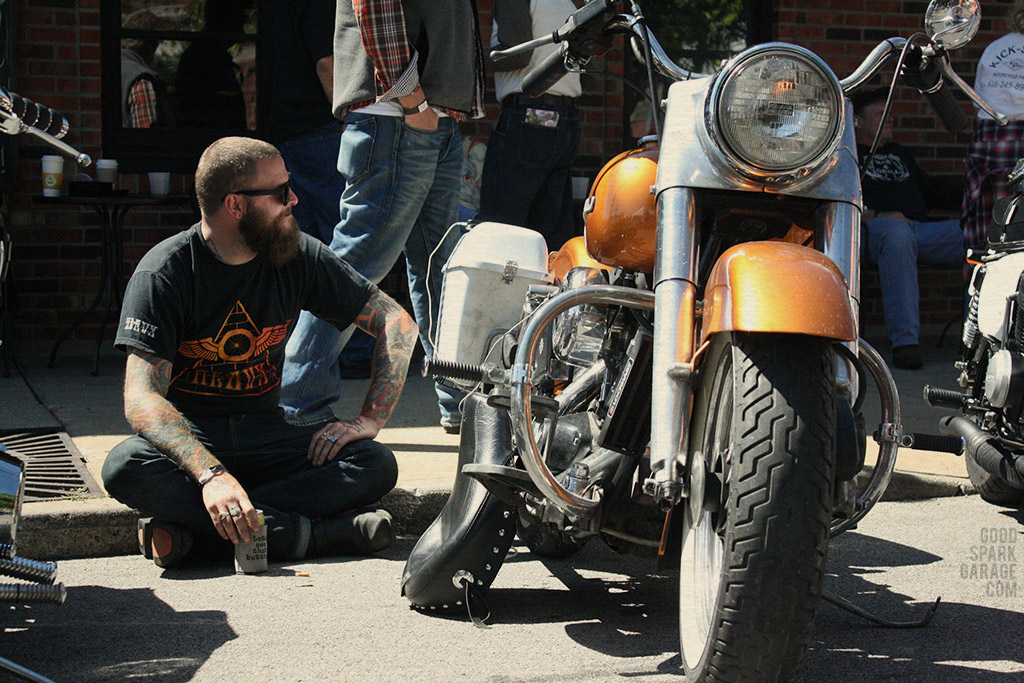 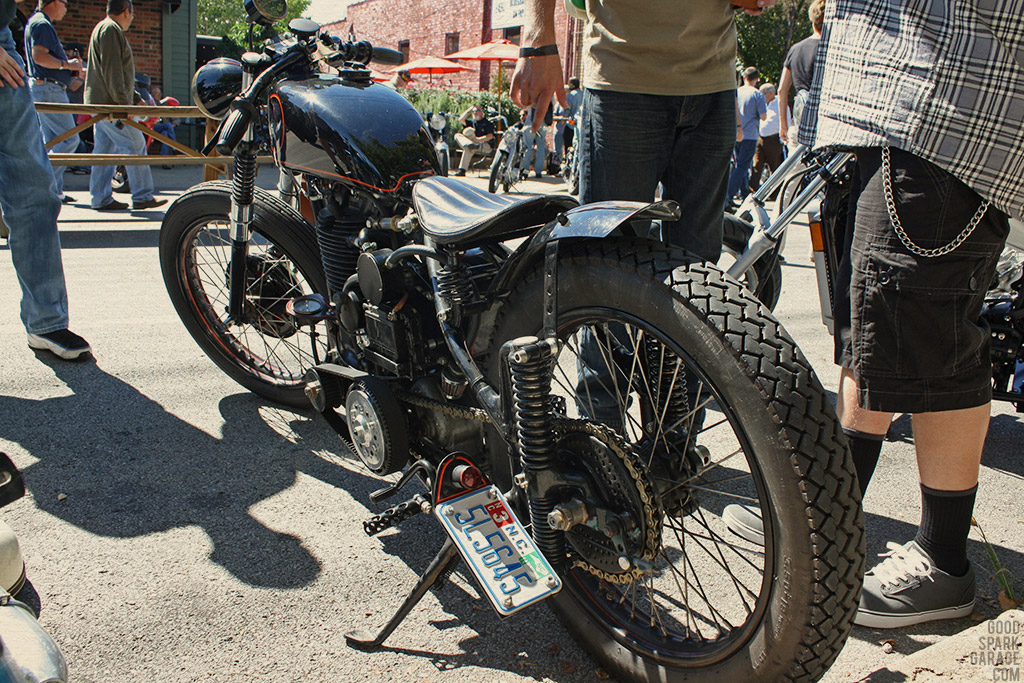 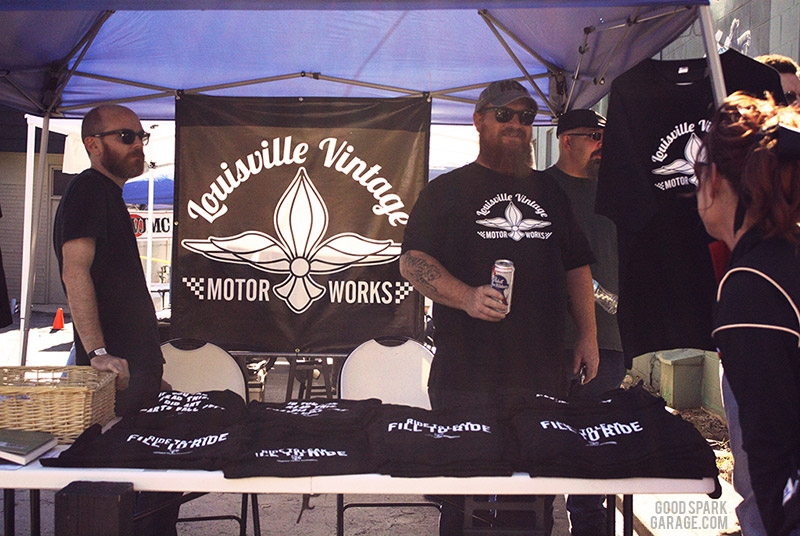 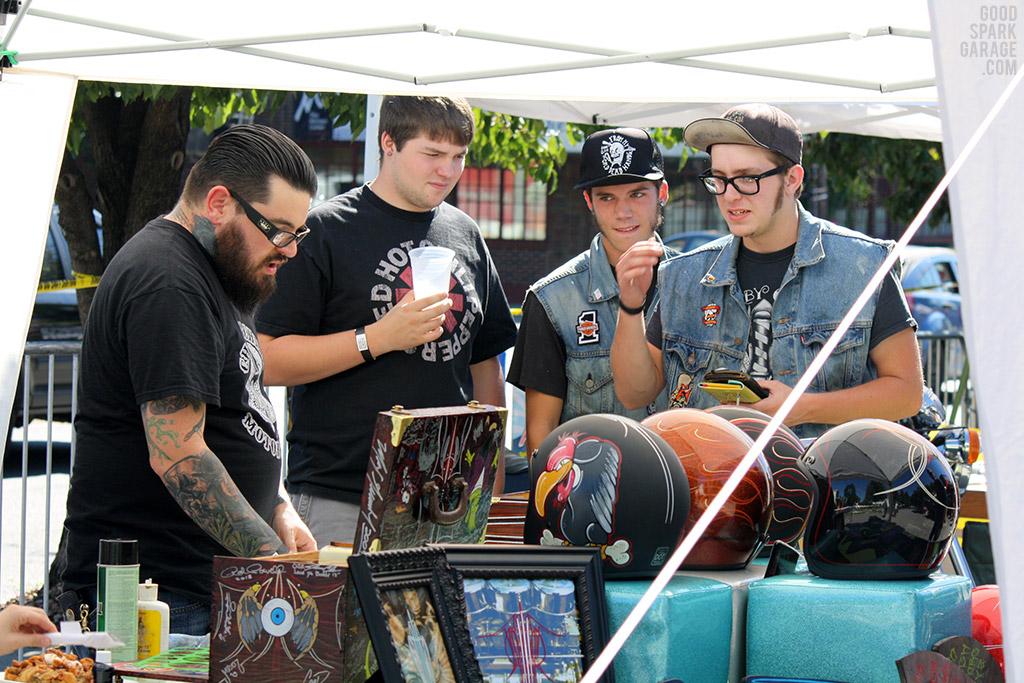 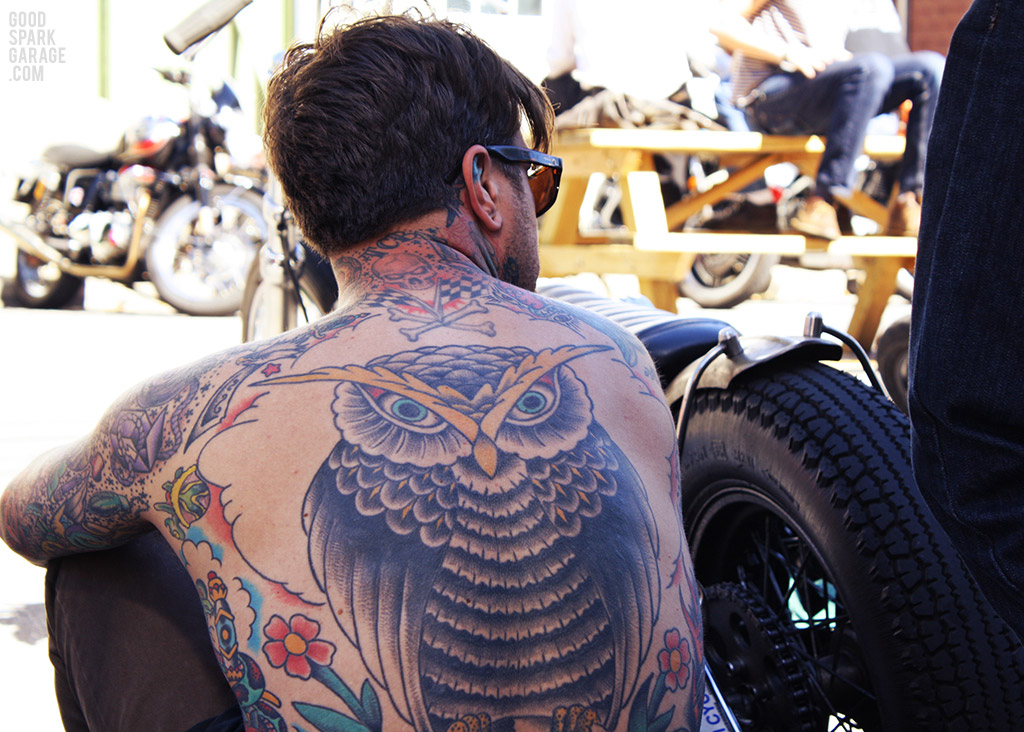 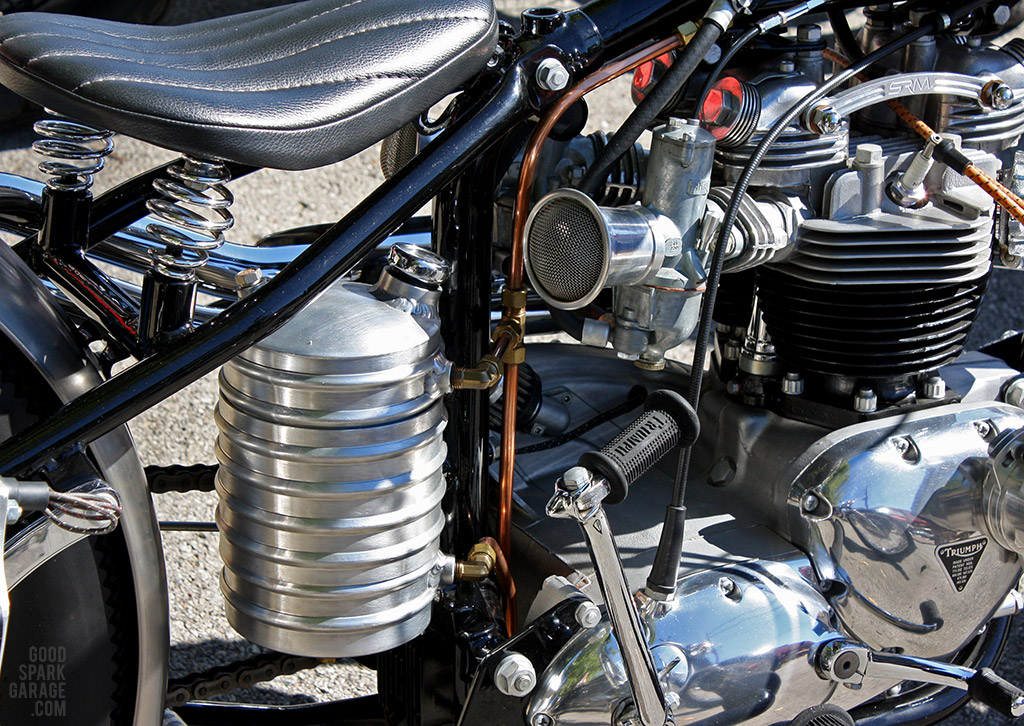 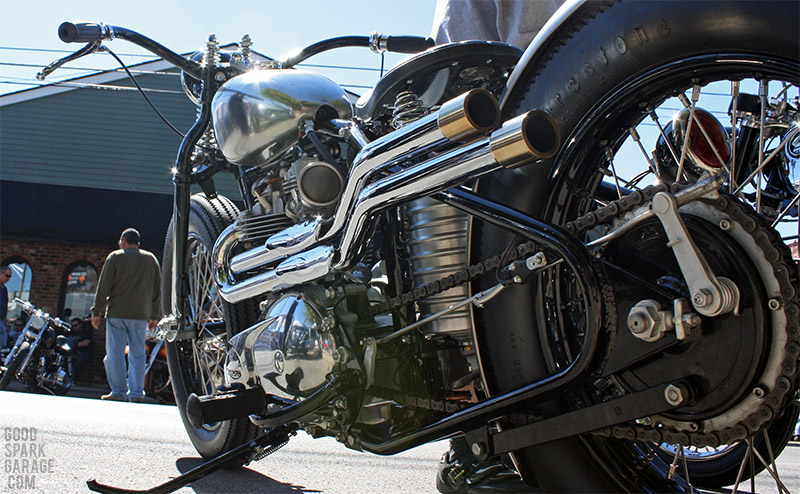 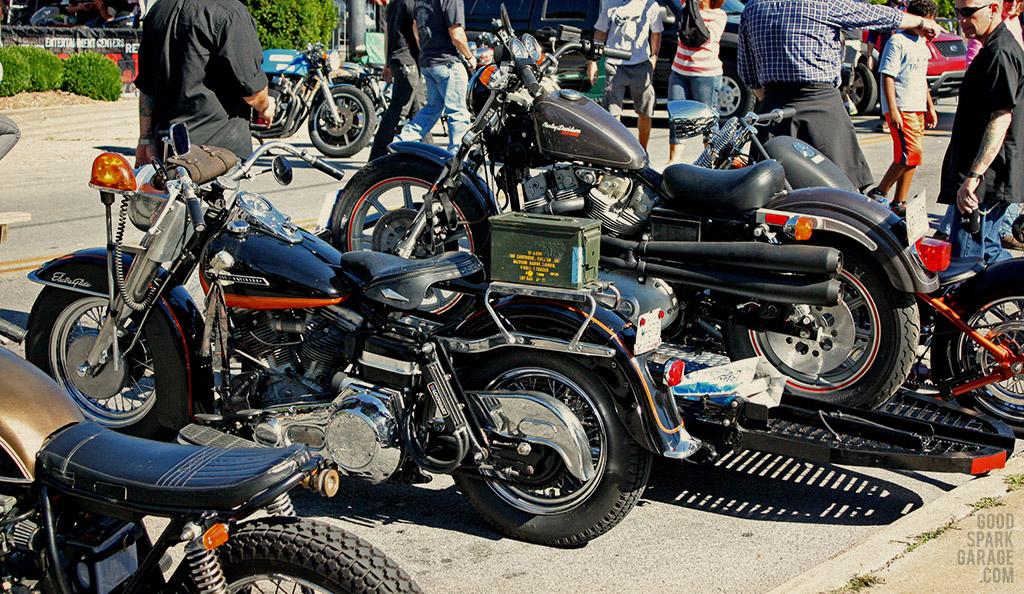 Above: Chopper Charley brought his 1965 panhead he calls “Wrecker Glide.” Its sidecar was used pick up police motorcycles in need of service and bring ’em back to the garage. The bike on the hack is a 1983 XR1000 only recently taken out of its crate. 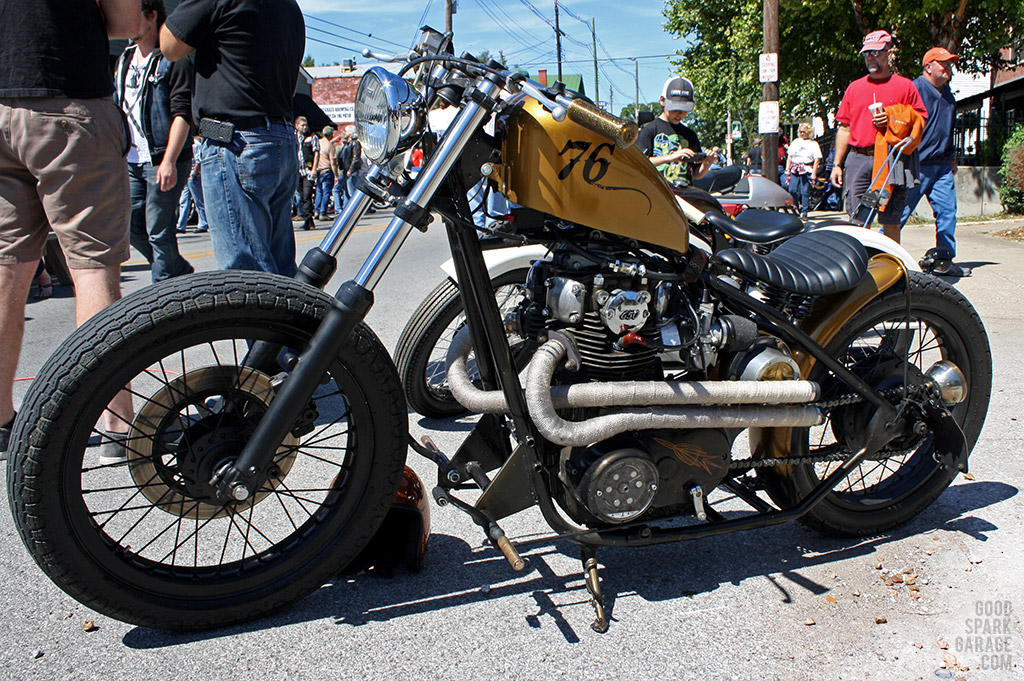 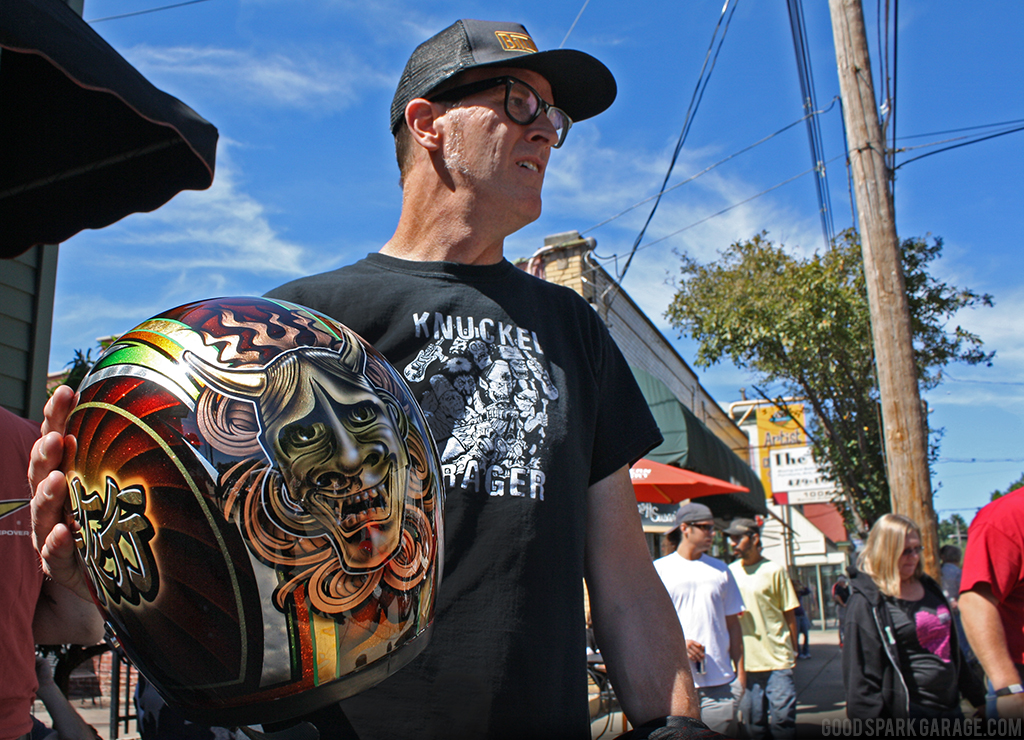 Above: Custom painter, Brad Plantenga of Bullseye Visual in Kokomo, IN, wore one of his own creations to the show. His custom hardtail is pictured below. 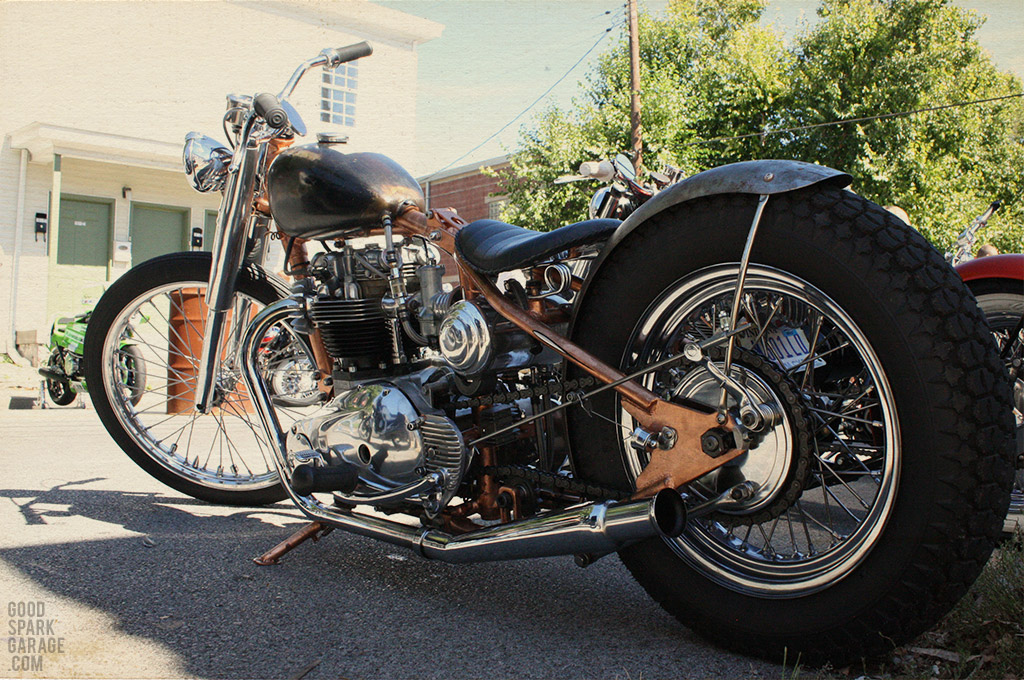 You never know how a first-time event will go. The weather could effect the turnout or timing could be off for prospective attendees. In this case, Kentucky Kick Down was firing on all cylinders, making us think this moto-gathering is gonna stick around awhile. Keep it tuned to their site to see how the 2014 show shapes up; maybe we’ll see you at the next KKD. 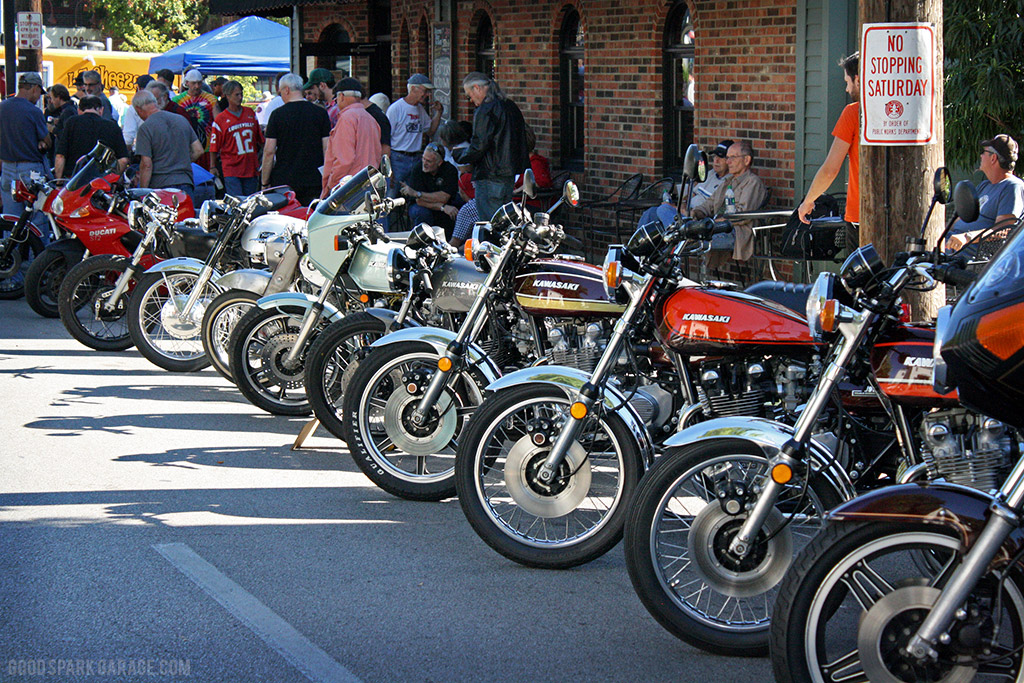 MOTOBLOT Chicago has rounded the corner on its second year. Once again, it lived up to…