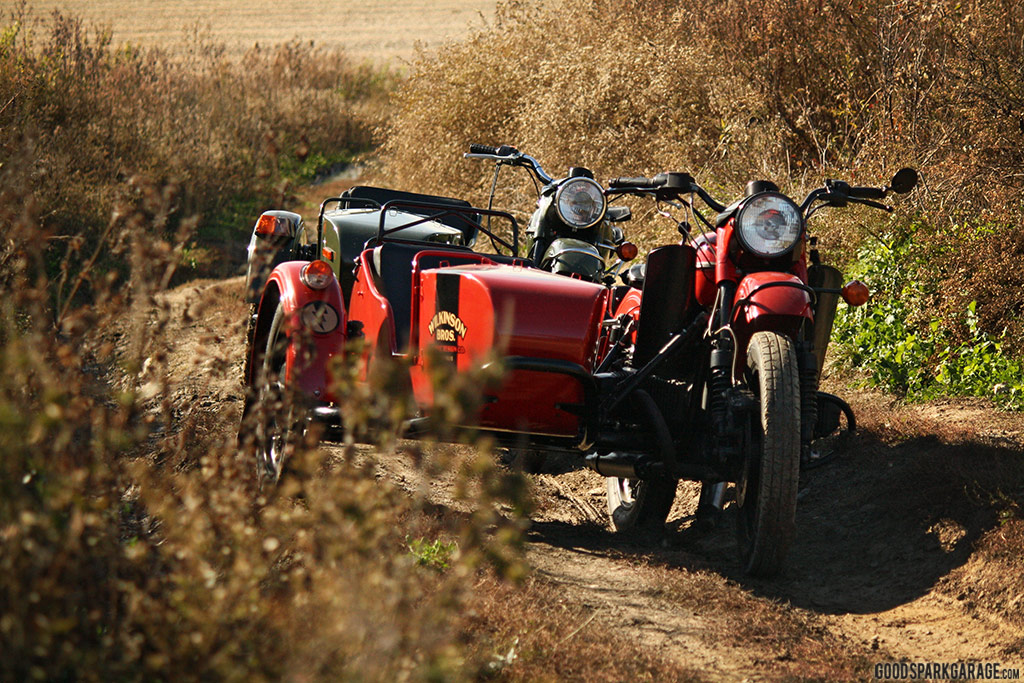 Our Russian sidecar motorcycles aren’t just novelties meant for parading about (though they do this quite well). While often our basic transportation, we don’t mind getting ‘em dirty and turning ‘em loose off road. Some folks may deem them anemic, but we’ve found there’s plenty of spirit in the throttle to have fun. Case in point: the story and video that follows…

If you want to literally rip through terra firma or get all Cyril Despres with your handlebars, pick your motorcycle accordingly. If you want to smoothly skitter across the rough stuff, or single-track your way across America without a heavy, steel mechanical appendage, then don’t buy a Ural and scoff at it afterward. It wouldn’t be fair.

Now, if you don’t mind a little motorized whimsy, or would enjoy finding yourself laughing at the required methods of problem solving that comes with the non-traditional geometry of a sidecar motorcycle, well, you’re in for a treat. That’s not to say you won’t be gritting your teeth, hanging a leg off and throttling out of danger like any other adventuresome motorcyclist. Risks are always present; no matter how fun or funny things get out there, we gotta respect them. 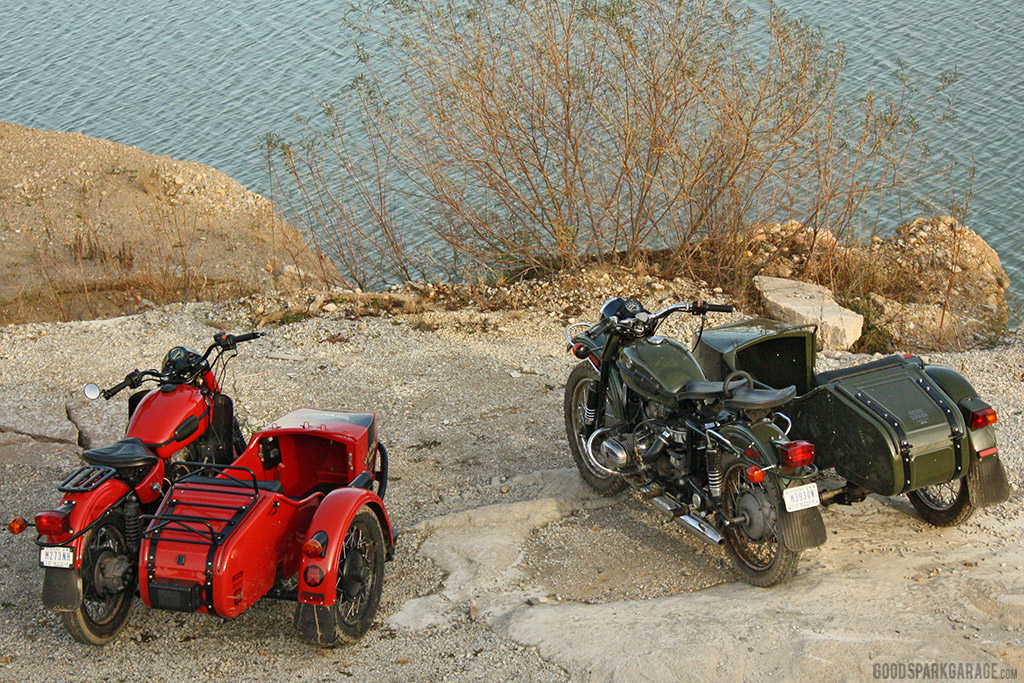 Some readers may wonder whether we used 2-wheel drive on the Ural Motorcycles, or if it was required. If anyone is interested in comparisons or curious about capabilities, scan our notes below:

The Green Bike:
This is a 2000 Ural Patrol. It’s 2WD equipped, but we did not engage the sidecar wheel during this ride/video. The engine is 650cc, just fine for these rough and confined locations. When riding to and from on the main roads, 55mph feels like you might be doing the engine a disservice. It’ll do it, but any higher and it feels like you’re doing something it isn’t meant for. It was using standard issue tires (on 19-inch wheels), so throw a set of knobbier tires on it and you’d see some higher roosts and quicker hill climbs.

The Red Bike:
This is a 2010 Ural Red October. It’s a limited edition model made to be lighter and more road-going than its rugged sidecar brethren. It’s geared a bit taller, the tub is lower, has 18-inch wheels and it’s 1WD only. These factors and a 750cc engine gives it some long legs, but as you can see, it’s still a blast on loose surfaces and able to lug through/over obstacles. Since this is mainly a road machine, we’re running the square profile and relatively slick Block K tires on front and back; we’re surprised at the traction we get through the wet, soft, gravely terrain. If you like this model but want a newer version, check out the 2015 Ural cT model with EFI and disc brakes all around (though the stock gearing may be lower). 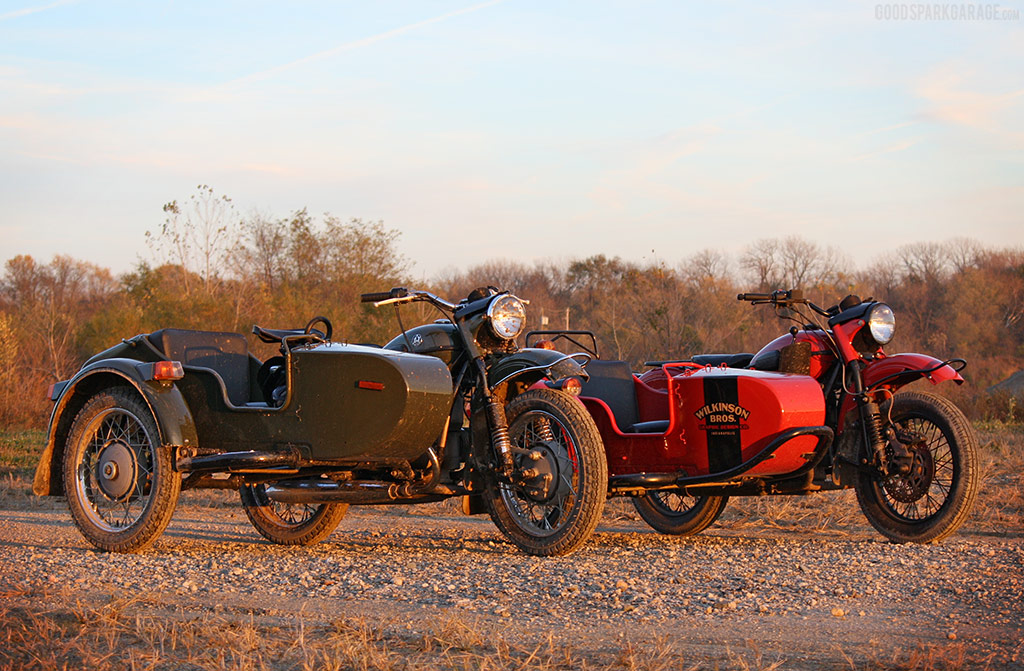 Overall, the Urals are a blast. They feel strong, even if a bit heavy. Weight distribution and body positioning are waaaay different compared to our lifelong upbringing on non-sidecar motorcycles, but it’s an enjoyable challenge. With the weight being 700+ pounds, you tend to remind yourself not to be in a position to have it roll over on ya. At off-road speeds of 50+ mph, right-turn puddle dodging isn’t as hairy as one might think, but still something to be mindful of (the chair lifts quite easily on the Patrol, much sooner than the lower Red October). 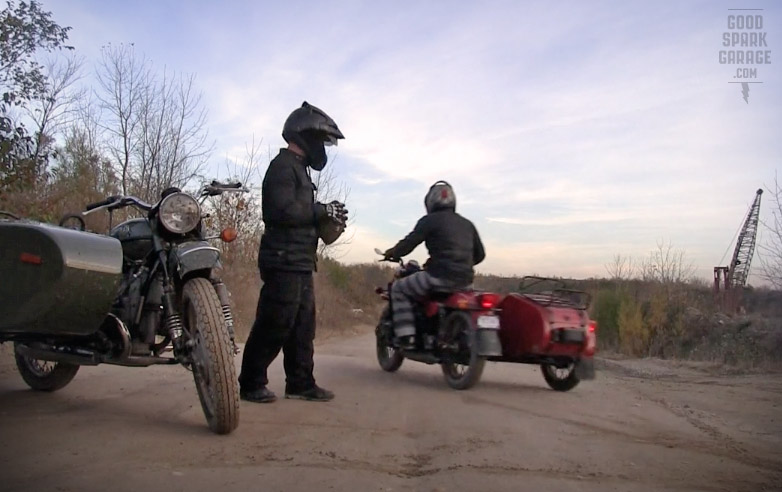 As for the football catch at the end of the movie, the answer is, “first take.” Kid you not, after establishing a round-about area for how far to ride out to, we flipped the cameras on and Casey threw a long ball as Corey ran a route in the Red October. Boom!

The apparel we’re wearing is by ICON Motosports and ICON 1000: Variant helmets, Turnbuckle Skelly gloves, Beltway and Akorp jackets, and black Elsinore boots. All work comfortably well; even well enough to throw a touchdown pass. NOTE: Corey is wearing a pair of 10-dollar jeans with hand-painted stripes (no prison time was required to own them). 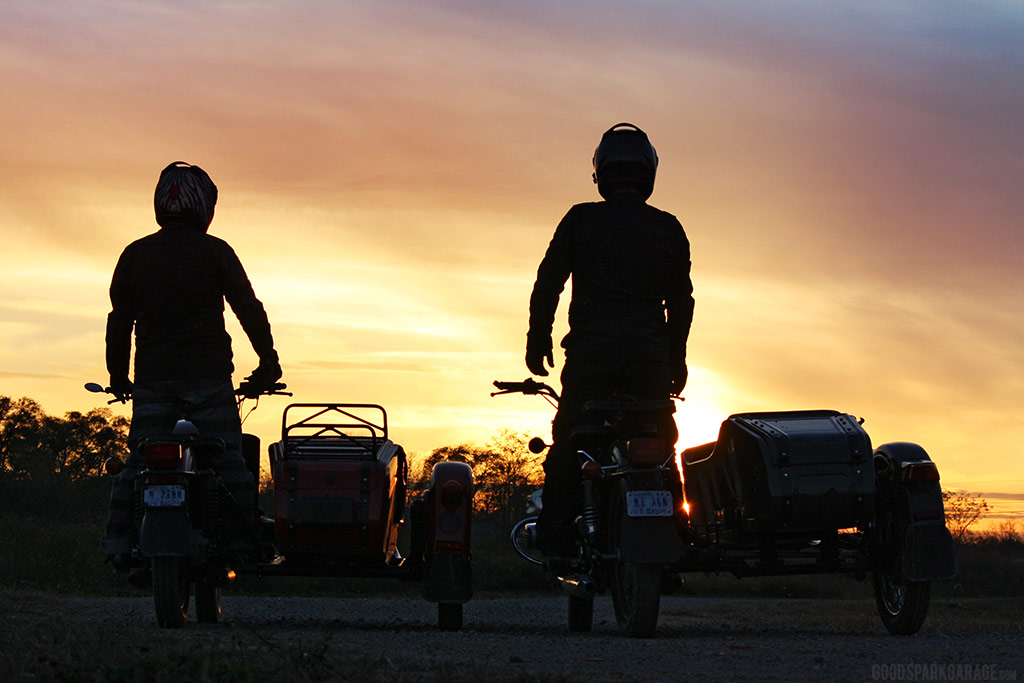