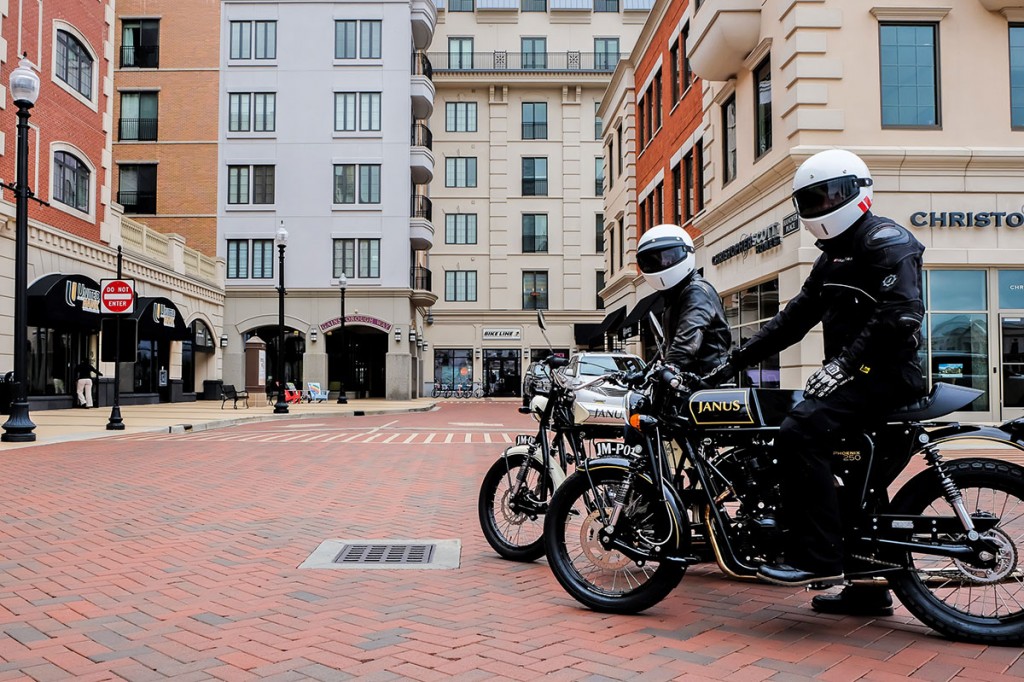 During a time when massive brands are stamping out countless clones, common are big marketing efforts trying to sell individuality. Then, these guys enter the fray. Janus Motorcycles is a small team of hands-on Hoosiers who are building, promoting, selling and orchestrating their network of skilled craftsmen to create authentic machines. Even better, they’re passionately delivering a motorcycling experience that’s extremely unique these days. Here’s how…

The fit and finish of a Janus motorcycle will lure you in and command your attention. The hardtail Halcyon 250 and fully-suspended Phoenix 250 each have exotic silhouettes, even to motorcycle fanatics who’ve seen it all. Their origin: a small garage in Goshen, Indiana, less than three hours north of Indianapolis.

After a few years of monitoring the company via social media and online moto-features, the buzz was positive, but I had yet to experience the bikes from behind the bars. With polite confidence, the guys at Janus offered up a test ride; an opportunity for my brother and I to assess how well the two bikes stack up against the hype.

We logged quite a bit of time zipping around roundabouts, passing through urban retail districts and using the highway to leapfrog congested side streets. Having ridden all genres of bikes, we’d categorize both Janus models as very capable urban commuters. That’s not to say we wouldn’t employ them as backroad explorers in places where concepts like “top speed” don’t enter the conscience. You’re probably curious about how long their legs are; we are told the bikes will reach 70mph, but we only needed 60-65 on the highway for this test. The little 250s were wound up, but moved us right along smoothly.

Dipping and diving into tight turns with ease, the proprietary leading-link suspension and 18-inch wheels soaked up the cracks and undulations just fine. If you wanted to take your significant other on a date to the theater, the upright seating position and wide handlebars of the Halcyon would be ideal. Of course, you’ll need to order a rack, passenger seat and pegs (approx $300 extra). The Phoenix, with its narrow bars and more aggressive stance, would be great if you want to swiftly filter through traffic and dice it up a bit.

With all the painstaking, locally-sourced craftsmanship and original key components, the engine origin is an oft-discussed topic. We’re of the mindset that the power plant must be chosen for the following reasons: It needs to be dialed-in and dependable. From a manufacturing standpoint, it can’t drive the cost sky-high either. All that said, the proven 229cc Lifan engine performs well and looks great. It’s simply ludicrous to demand that a company, however talented, enter into the quagmire of engine R&D.

We’re certain these guys immersed themselves in research for what would complement their ‘baby’ and landed on a solution that properly propels their artfully-composed machine. 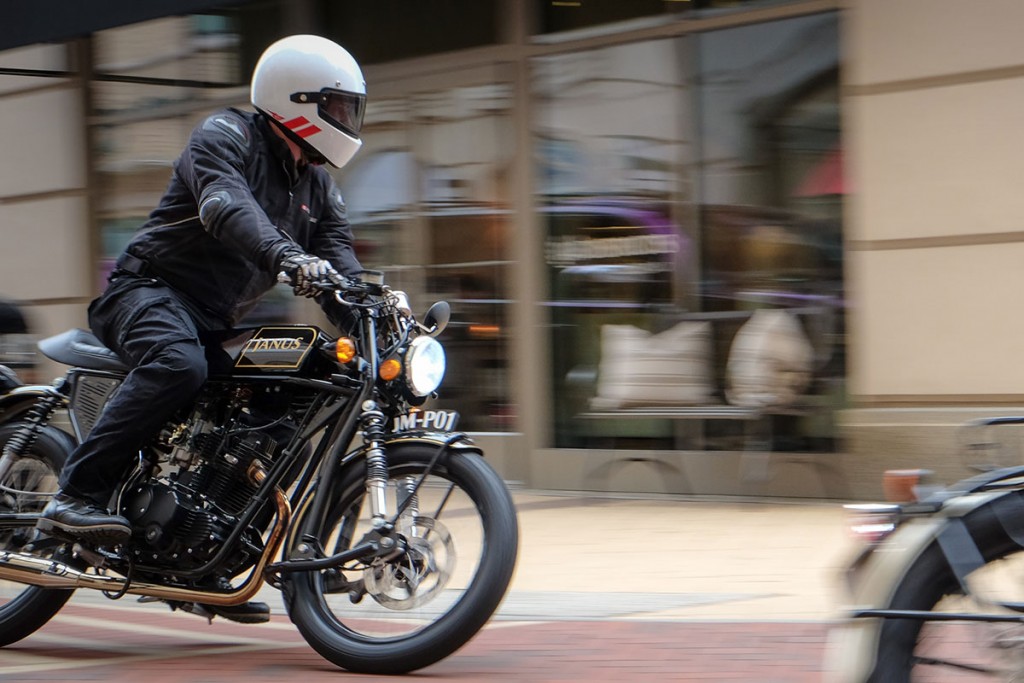 You can jump off the line pretty quickly by really wringing the throttle, but short-shifting the 5-speed engine provided smooth take-offs that keep you moving with traffic. I’m sure other reviews will focus more on data, maybe even show charts n’ graphs and talk about torque curves; we just let go and enjoyed the ride. Weighing in at 265lbs (120kg), you can whip these bikes around effortlessly. And don’t mistake their small-displacement status as scooter-types; with a 53-inch wheelbase and 31-inch seat height, it feels like you’re piloting a proper motorcycle.

After the test, I realized how much these attractively simple bikes would compel me to choose them over other bikes for lunch-runs or quick trips. Their light weight, non-intimidating stance and show-off good looks would definitely liven up mundane workday errands.

Though the tech specs check out, style and nostalgia take center stage and the audience we encountered gave it rave reviews.

To me, a bike that conjures up the joy of motorcycling isn’t the sharply-aerodynamic, grossly-overpowered modern motorcycle; it’s a bike like the pared-down Halcyon or Phoenix that creates an experience for the rider, an evocation of a simpler time. Using hand-formed aluminum tanks, stainless steel instead of chrome, and full-grain leather to complement this experience is intentional. I imagine the Janus artisans and skilled craftsmen carefully running their hands over seams and stitches and welds until they are pleased with their work. 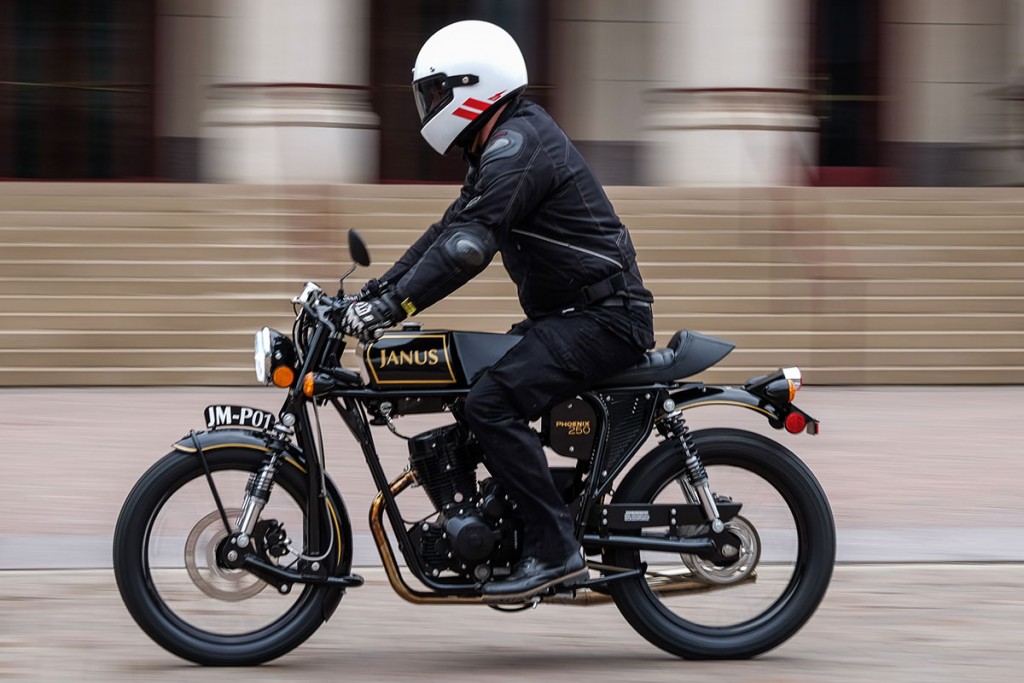 With mentions of the above finery built into a Janus motorcycle, it’s no surprise that the price becomes a polarizing topic. With an approximate 6-thousand dollar investment (plus or minus), audiences react in one of a few ways: Some folks will tip their cap in awe and appreciation, then walk away. Some will get fussy and publicly lambast these guys for pricing a product above their opinionated appraisal (a common occurrence when a thing o’ beauty gets a lot of attention). But, there is a certain number of people that will flat out WANT a Janus and the price will be a mere formality as they reach for the keys. I’ll just say this: if someone decides to purchase a Janus bike for how good it’d look parked outside of an urban office, or because they’d enjoy prompting smiles and waves from onlookers, or to encourage themselves to stop and smell the roses in style, then they will get their money’s worth on Day One.

“Bravo! Very nice!” a guy said from his car, holding an applause out his window toward our test bikes. One onlooker multitasked, taking iPhone pics with one hand and fist-pumping with the other. Another driver stopped traffic to set up a quick pic. “Beautiful, guys!” he said before he resumed his commute. This kind of public affirmation proved our hypothesis that these are bikes you’d be proud to be seen on.

Their appearance oozes an approachably cool persona that transfers to its rider; surely you must have good taste if you ride a Janus motorcycle.

Founders Richard Worsham and Devin Biek have carefully breathed life into their hand-crafted American motorcycles. They’ve achieved their goal and made their mark in motorcycle history. Sure, anyone can start a motorcycle company by sourcing parts and slapping a logo on a gas tank, but this Janus thing, up in Goshen, is much different. It is born out of a hardworking spirit and backed by believers and supporters of good intentions brought to fruition. People who purchase a Janus Motorcycle will no doubt be taking home the embodiment of Worsham and Biek’s genuinely passionate effort to realize their dream. 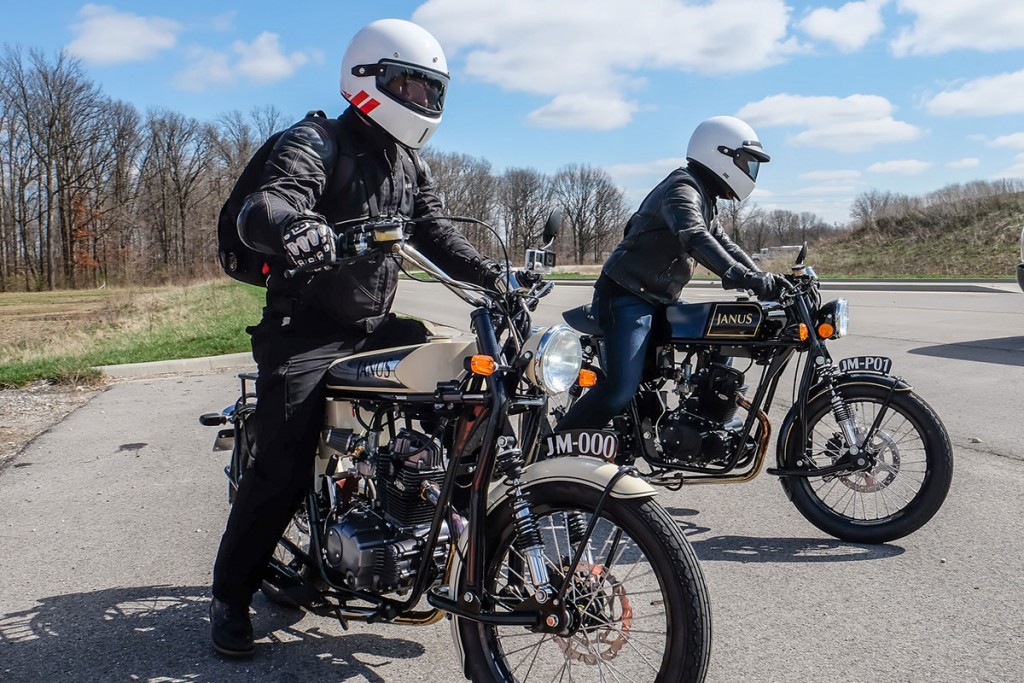 The helmets we’re wearing in the photos are by Nexx Helmets. Thanks for stopping by GSG; if you know someone who is interested or curious about what it’s like to ride a Janus motorcycle, send them a link to this ride review or share it on your social media channels.

Our 1949 Dodge B1-B panel truck. All the creaks and clunks keep us smiling and thinking…