We appreciate a good, midwestern bike event. Chicago, Louisville, Indy, Cincy and, for this story, Milwaukee; they’re towns with a quiet patina inhabited by hardworking, humble people. Many of these good people also like to have fun, like Scott Johnson and Warren Heir, Jr. These guys have a healthy respect for motorcycle culture and their well-earned reputation in the region drew thousands of likeminded fanatics to the Mama Tried Motorcycle Show. 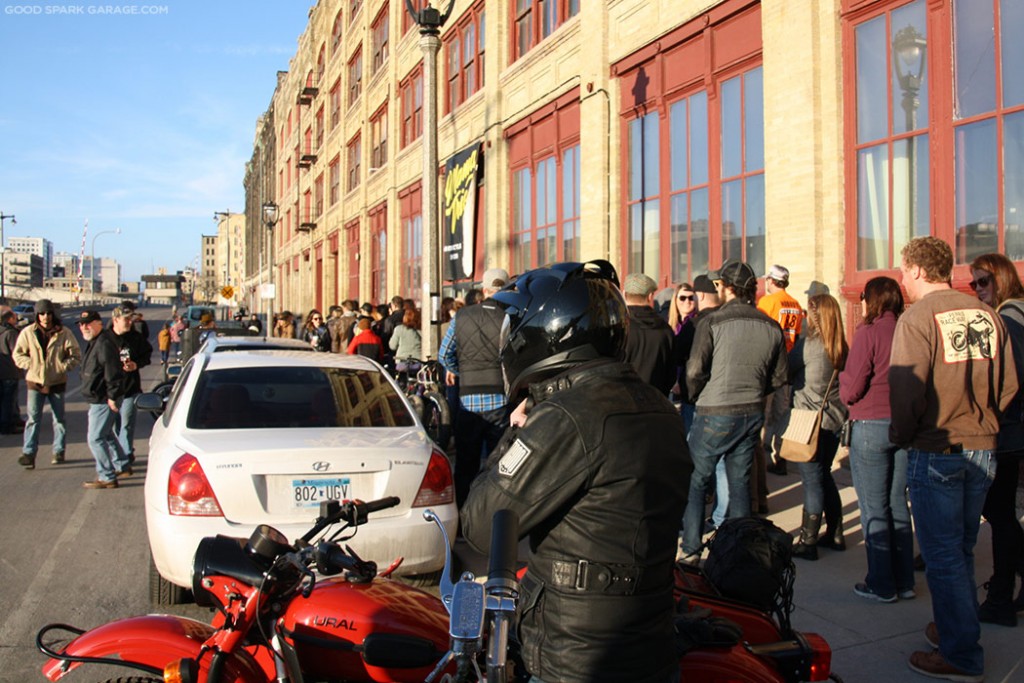 We brought our Ural sidecar motorcycle for some around-town transportation and our custom Honda CL360 Scrambler to display at the show. High winds, cold temps, and things you might associate with February Wisconsin weather had us bracing for a grey, frigid, but fun weekend. 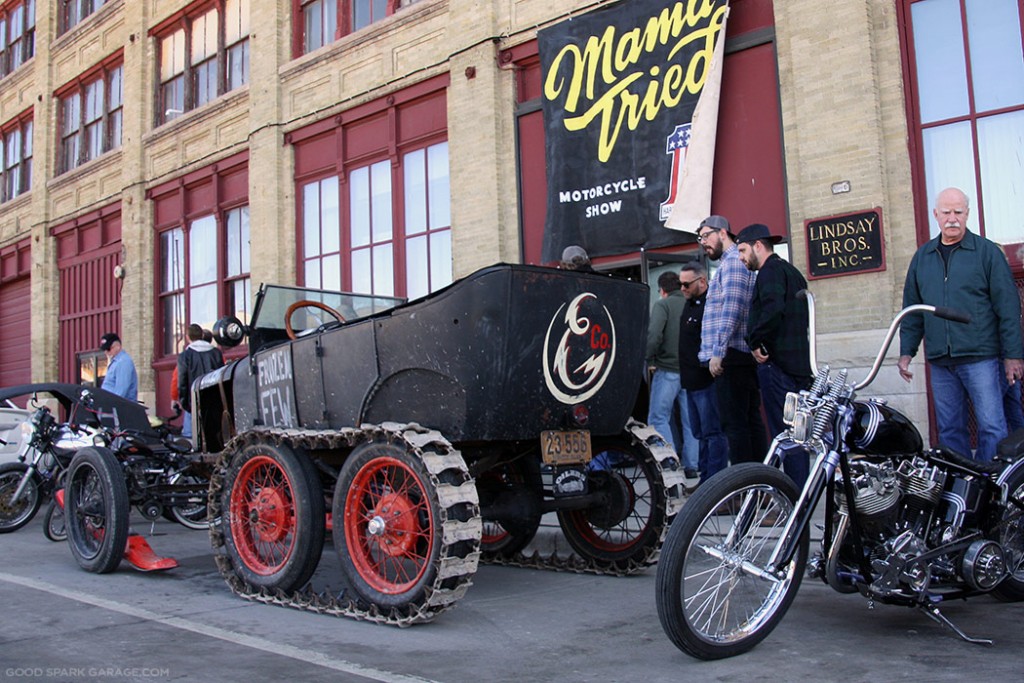 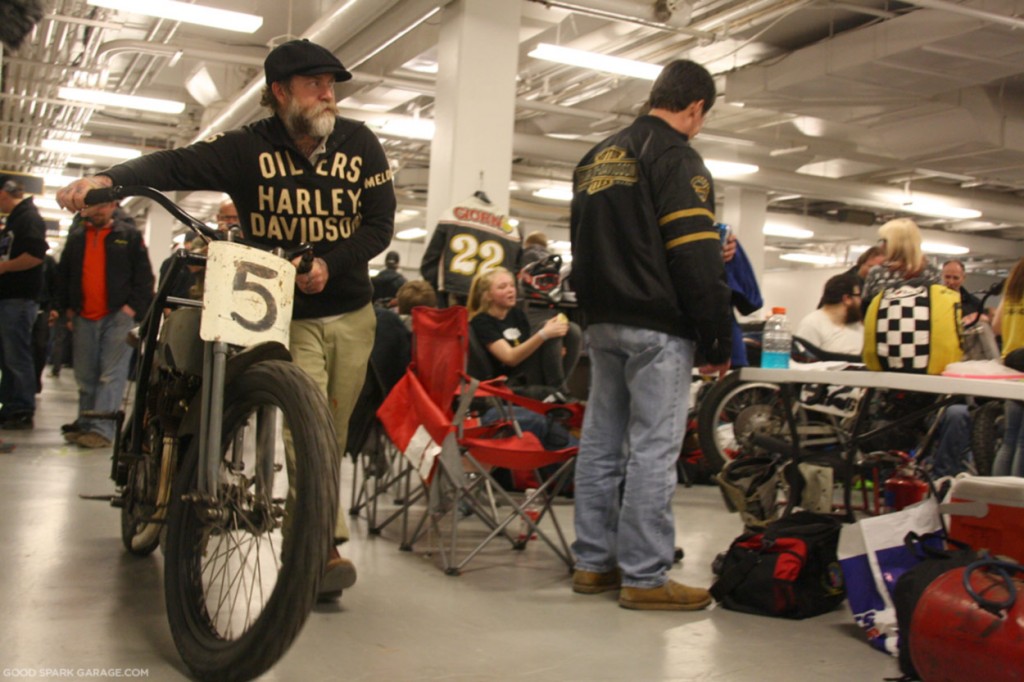 To kick the things off, attendees filled the stands at UW-Milwaukee Panther Arena for Flat Out Friday, where a series of motorcycle races took place on an indoor, concrete track coated in a tacky layer of Dr. Pepper syrup. Once it dries, just imagine how sticky it’d be, then multiply that by five. 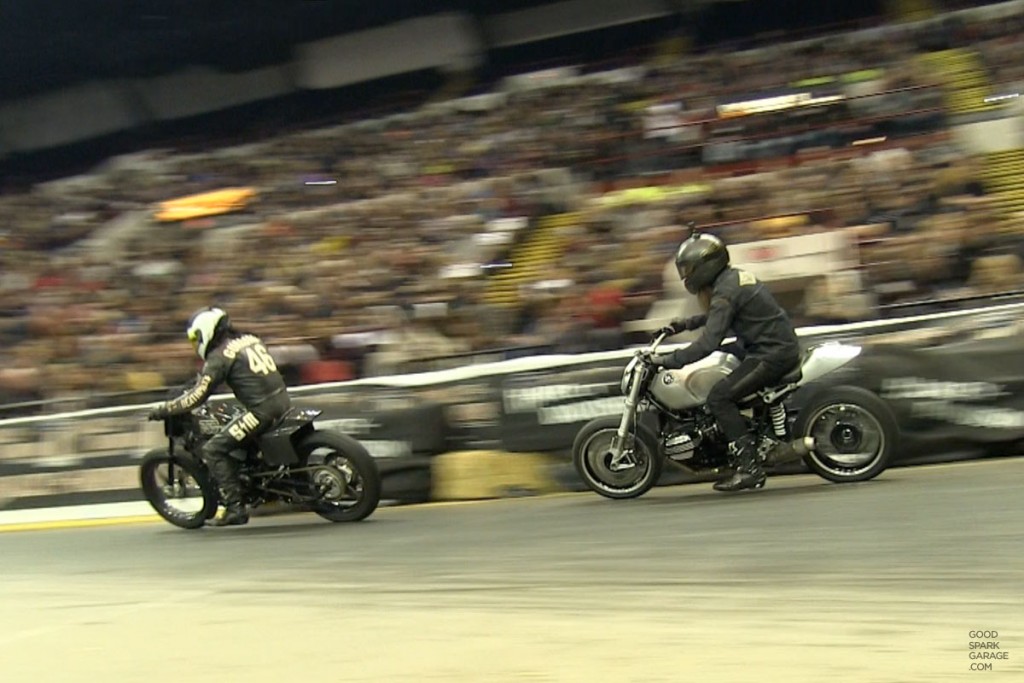 Famous flagman for AMA Pro Flat Track, Kevin Clark made an appearance. He puts on a show with his trademark style of flag-waving, but he does take this gig seriously. When I drifted a bit passed the infield press boundary to shoot some video, I felt one of his tennies give me a nudge back to the safety zone. (Fair play.) 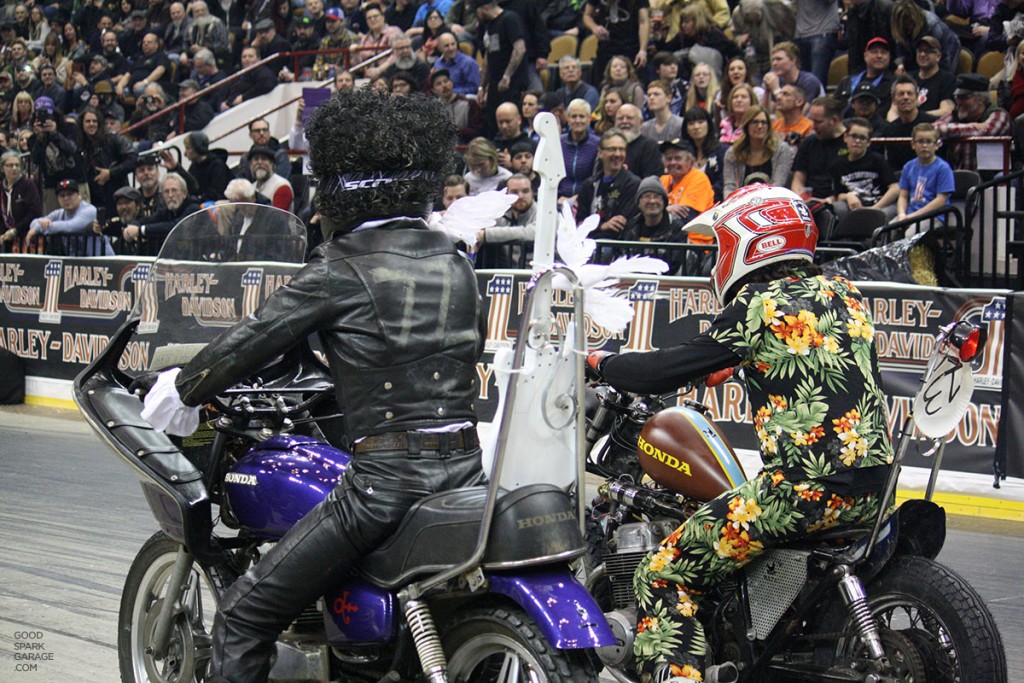 The crowd cheered with collective approval of the Goof Ball/Inappropriate Motorcycle Class. Taking home the win was The Purple One (aka, Ronny Zastrow), shown above, riding a budget-friendly Honda with a shoulder-perched dove. Someone shoulda got hurt during this class, or maimed by an exaggerated sissy bar, but all went well aside from a few spins and spills. 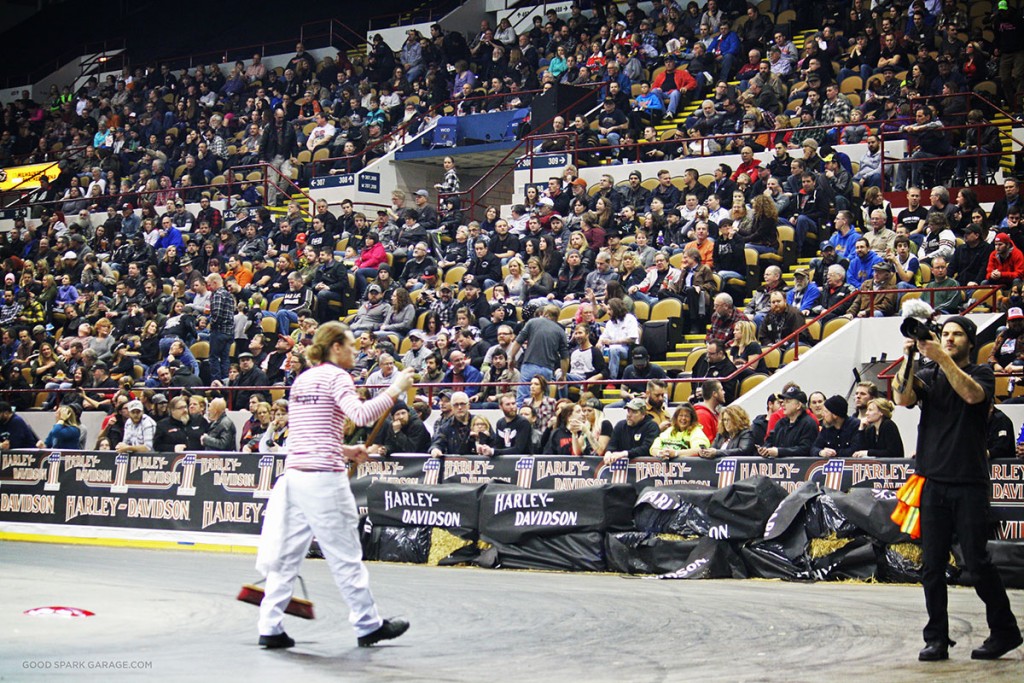 For 15 bucks or less, folks watched seven classes hustle around the tight oval at various levels of intensity. Loudness, fumes, injuries, bar banging and bikes hitting walls; how the heck was this allowed? It was great – and the crowd ate it up.

The Indian Motorcycles/Roland Sands Designs SuperHooligan crew stopped in and added some corporate-backed fun to the whole weekend. Though the smaller bikes and supermotos ripped around the track quicker, the big twin bikes still raced hard and muscled their way through the pack.

The organizers couldn’t anticipate exactly how many spectators would show up, but they did make sure to put on a good show (it looked like there coulda been 5-thousand people packed into the arena). Word on the street is that Flat Out Friday will be back for future Mama Tried weekends; plan your Februarys accordingly.

On Saturday, from late morning to late evening, the doors were open for the 3rd annual Mama Tried Show. This year, it was located inside the wooden-floored Lindsay Building, a cream-bricked warehouse built in 1892 as a distribution facility for agricultural equipment, bicycles, buggies and sleighs. It was dusty, creaky and inviting.

To show a bike at Mama Tried, you’ve gotta be invited or accepted. Their aim: to showcase the best honest, homebuilt, and unusual race and street motorcycles from the Midwest and beyond. Man, there was a wonderful miscellany of customs. 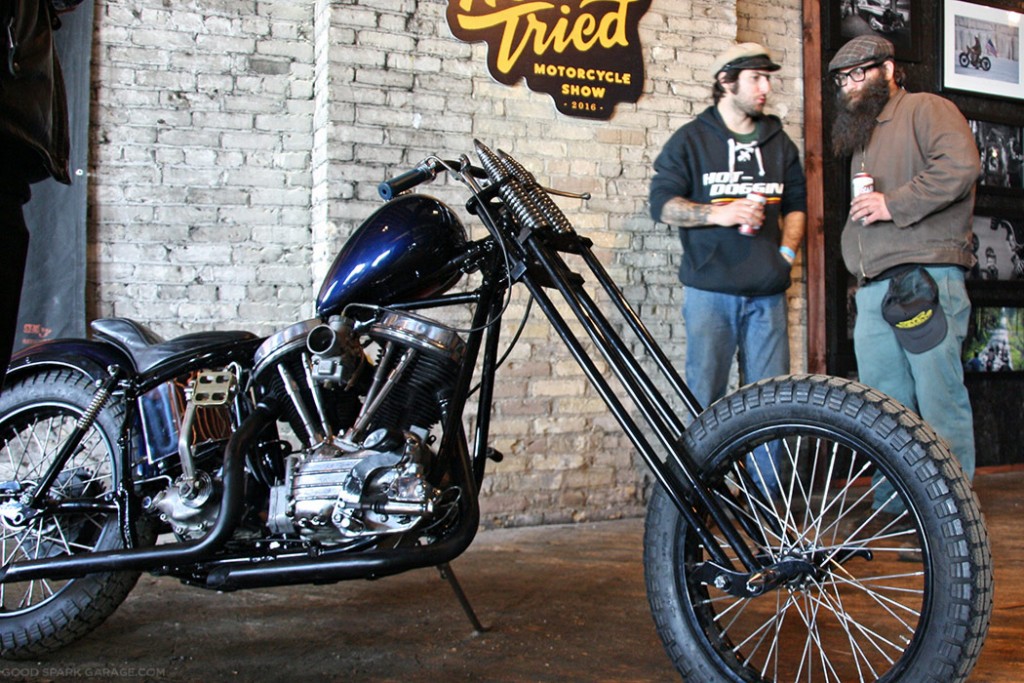 From gaudy to weird, from mild to purpose-built, there were so many bikes to peruse. As with these types of events, the funky, vintage, and custom bikes draw an interesting crowd. And they came in droves. The line to get in stretched far at times, and taking pics of bikes was a challenge in the congested aisles…but that’s okay, it was a bike show not a photo shoot. 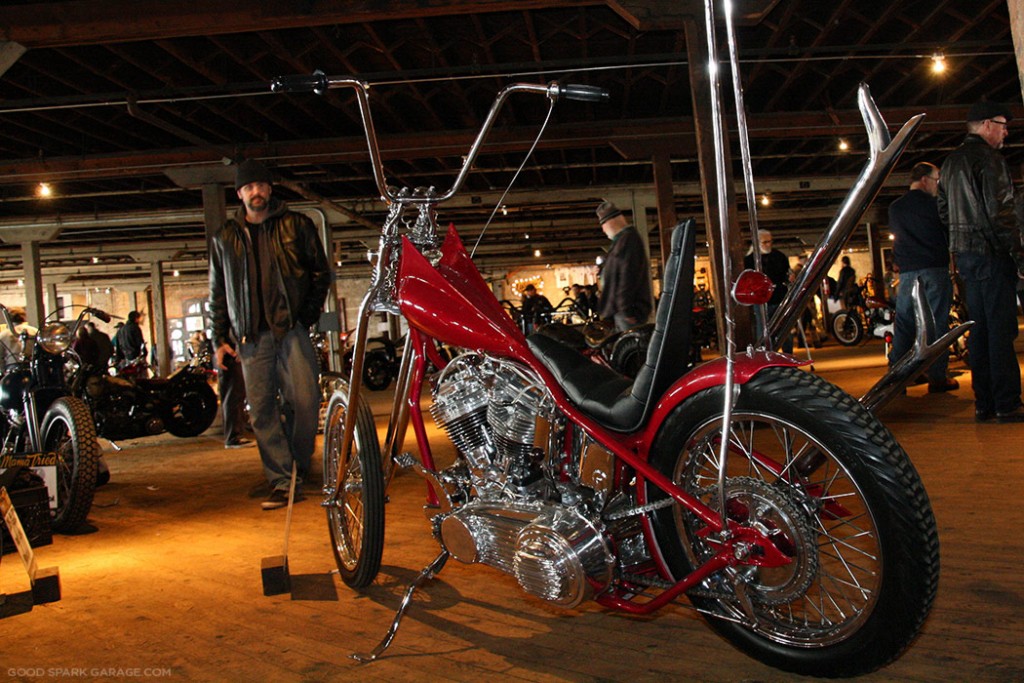 If you looked out the old arched windows just 1000 feet to the east, you’d see the multi-million dollar Harley-Davidson Museum and office complex. As gritty and grass roots as this gathering feels, it’s great to see H-D enthusiastically support it. 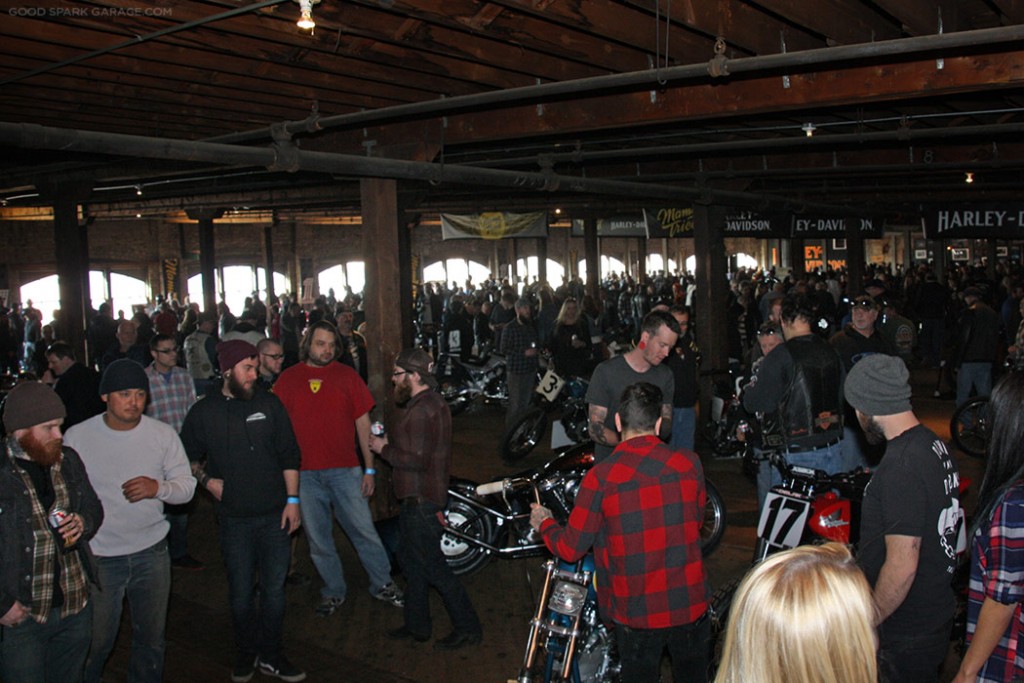 We talked with Scott Johnson and members of his event coordination team before and during the show. The behind-the-scenes effort to make this thing so successful was impressive. One notable presence is Maureen Post, a writer/photographer whose PR/marketing savvy helps keep things tuned. With so many people, so many moving parts and unknowns, it’s probably like trying to dial in the fuel and air mixture of a finicky two-stroke. 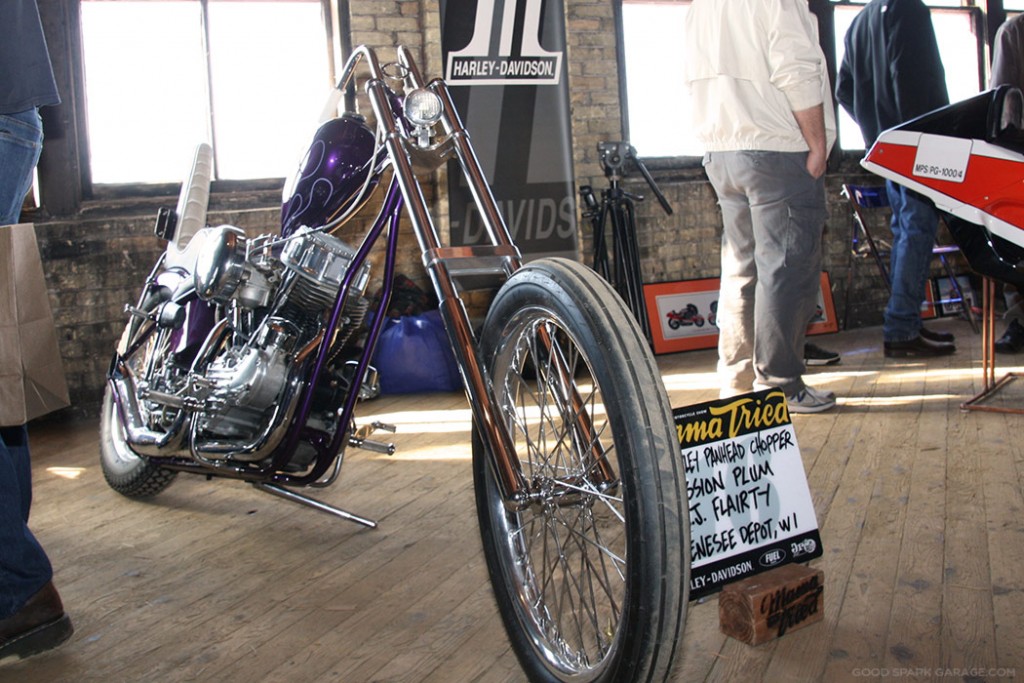 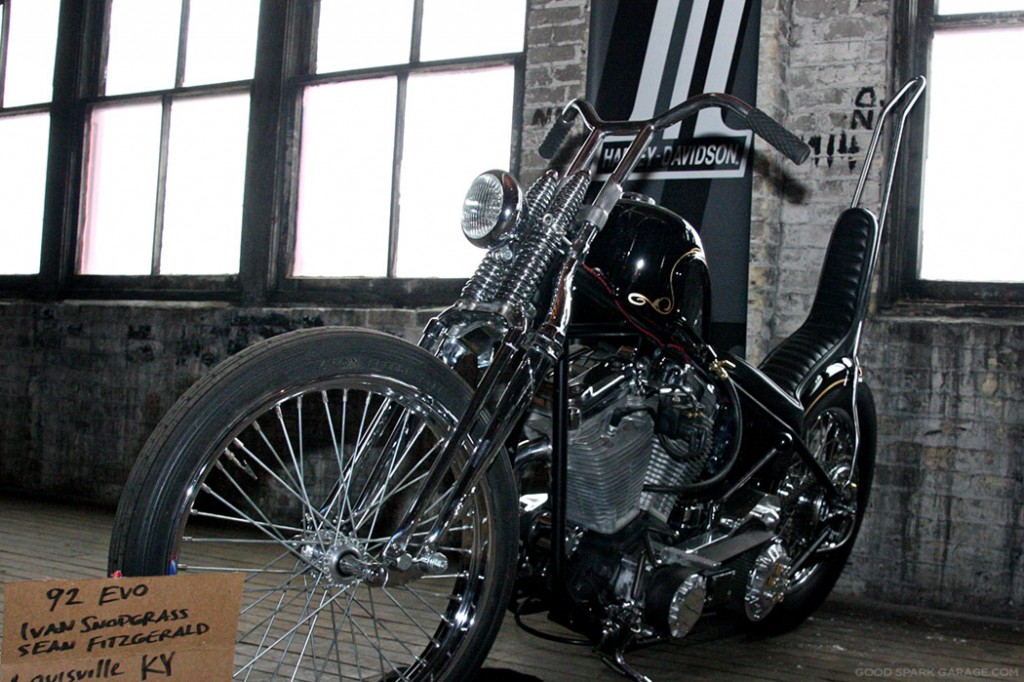 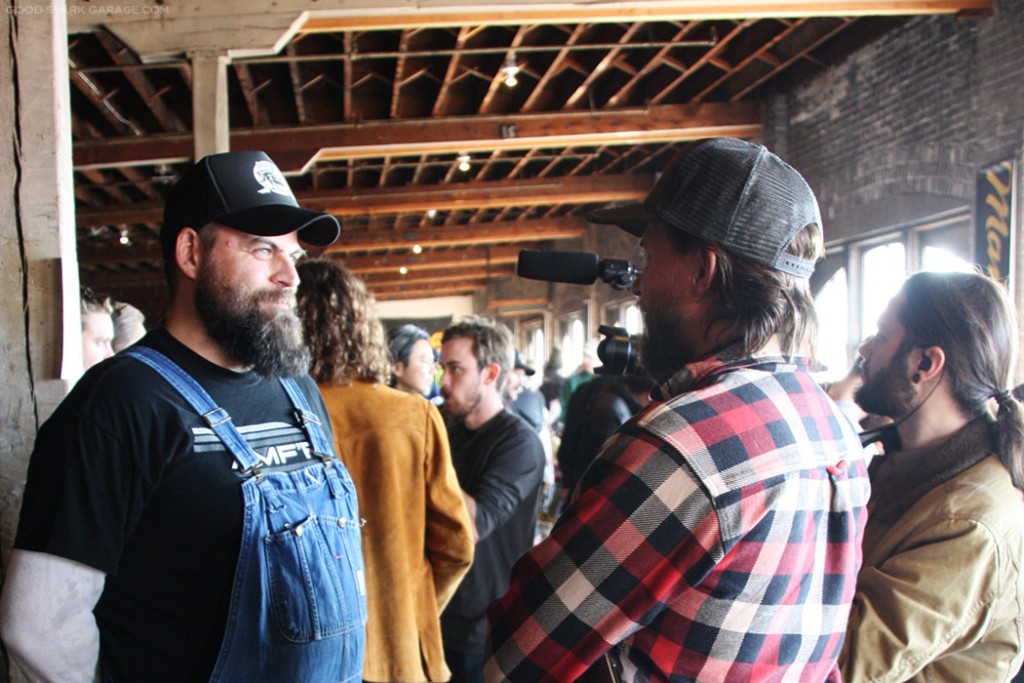 Beyond the bikes, this is an opportunity for motorcycle enthusiasts and colleagues to meet up and shoot the bull. When winter discourages outdoor hang-outs, Mama Tried helps combat cabin fever by providing a great forum for long conversations and shop talk. 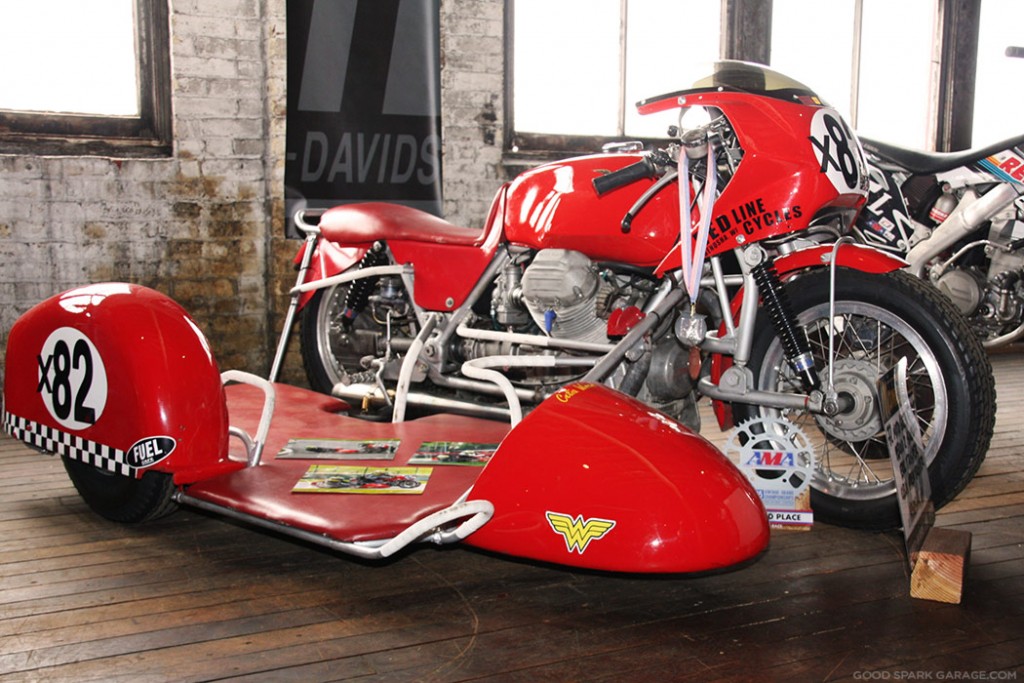 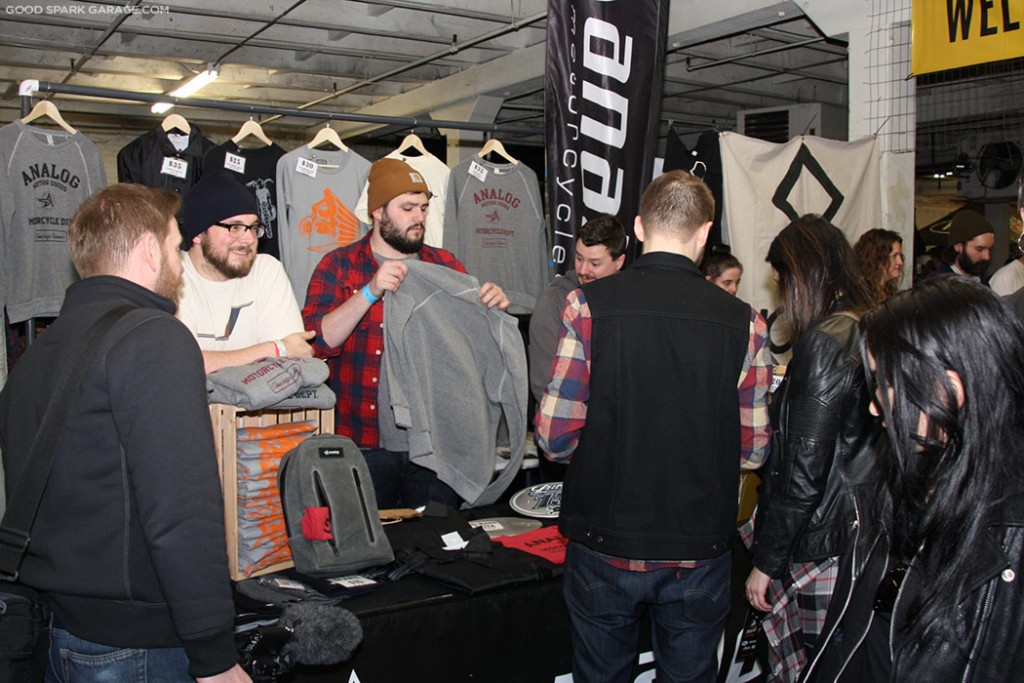 The first floor was full of vendor booths, food and libations. You could find lots of apparel to add to your greyscale wardrobe here. 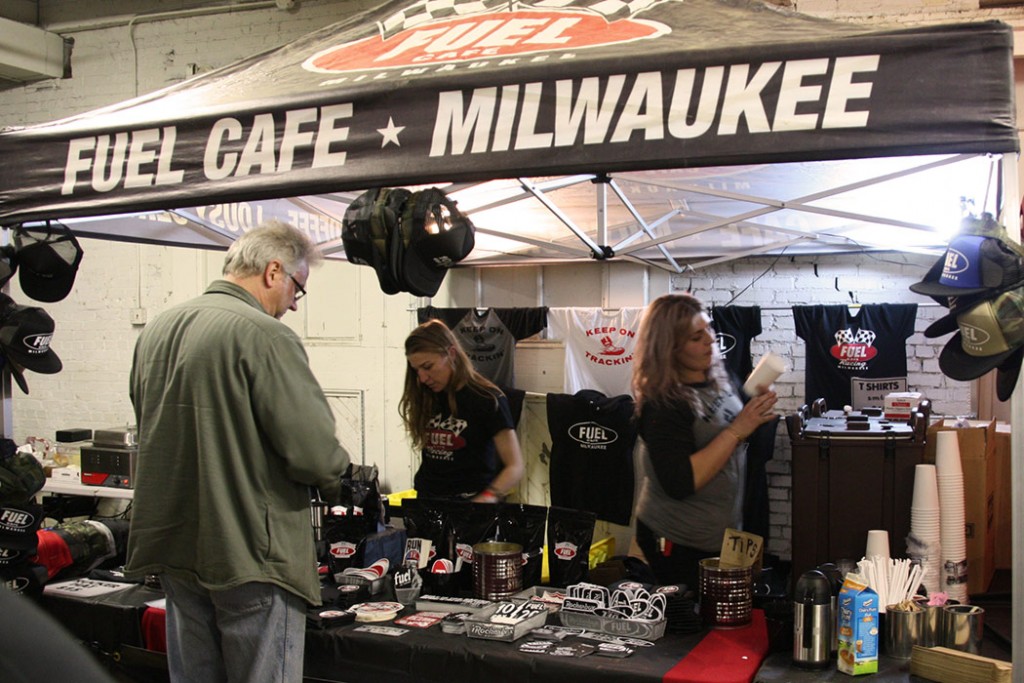 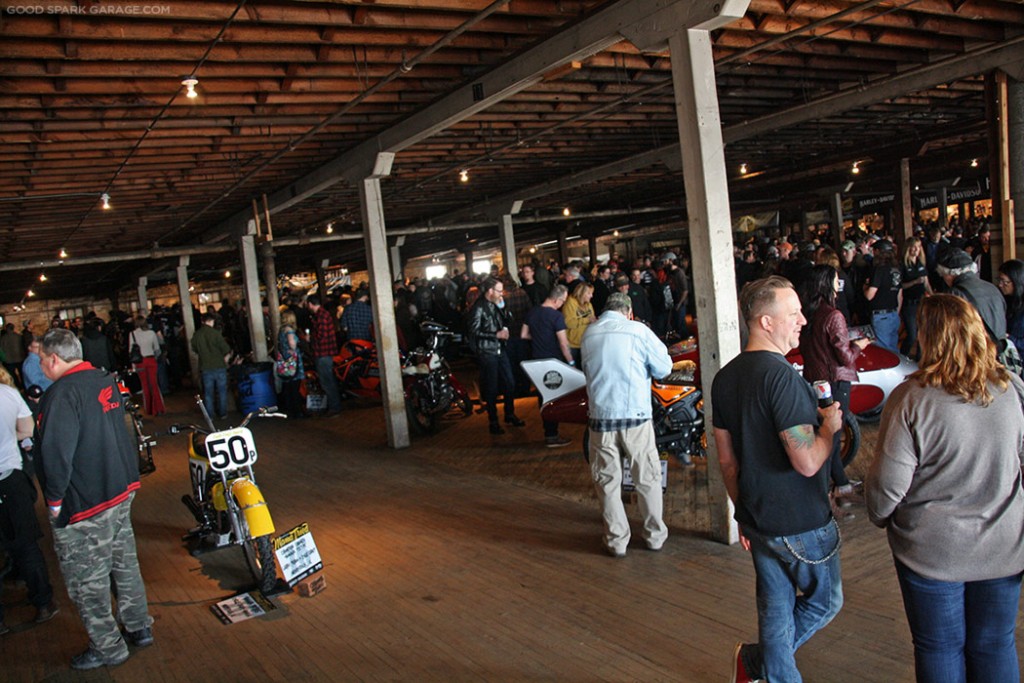 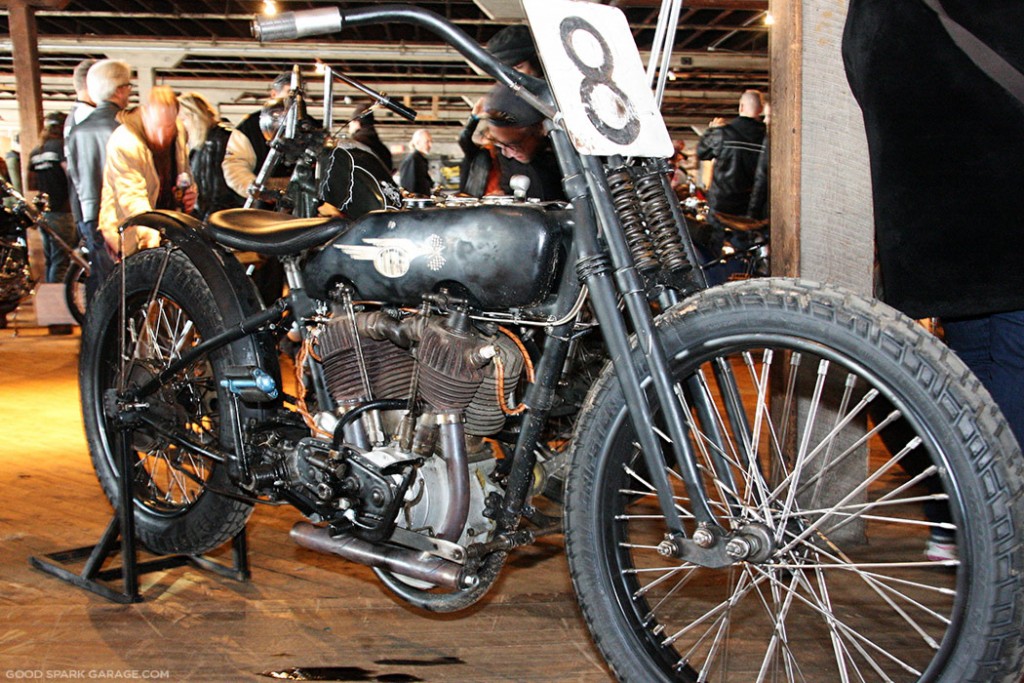 On Sunday morning, a handful of show-bikes had left for home or set out to find some ice to ride on. Still, there was plenty to look at and it was easier to step back and photograph without a wall of people between you and the bikes. 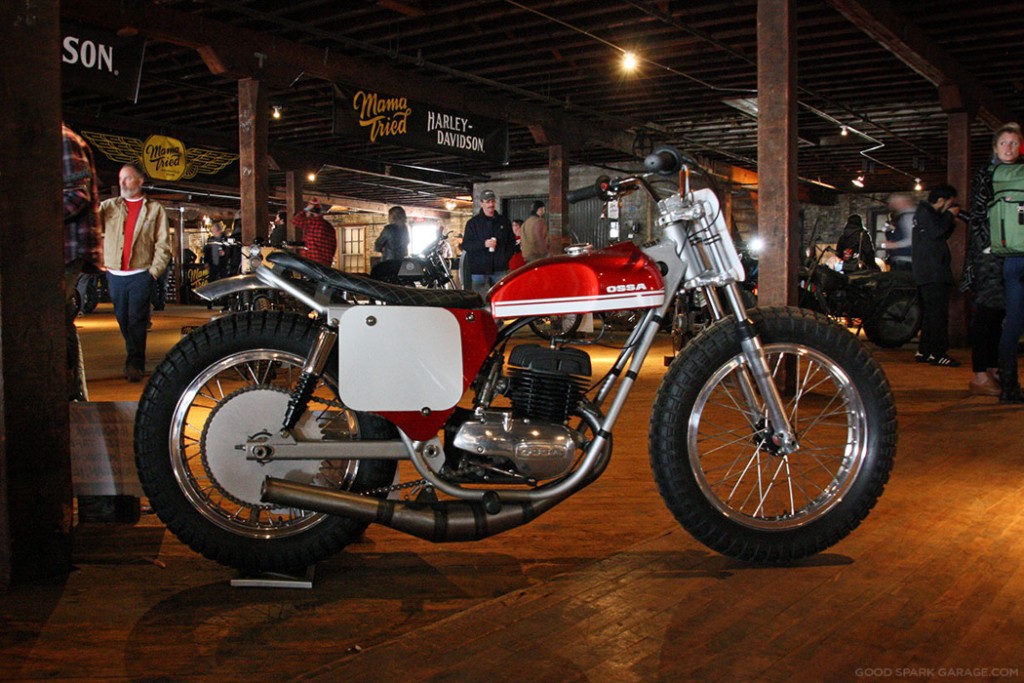 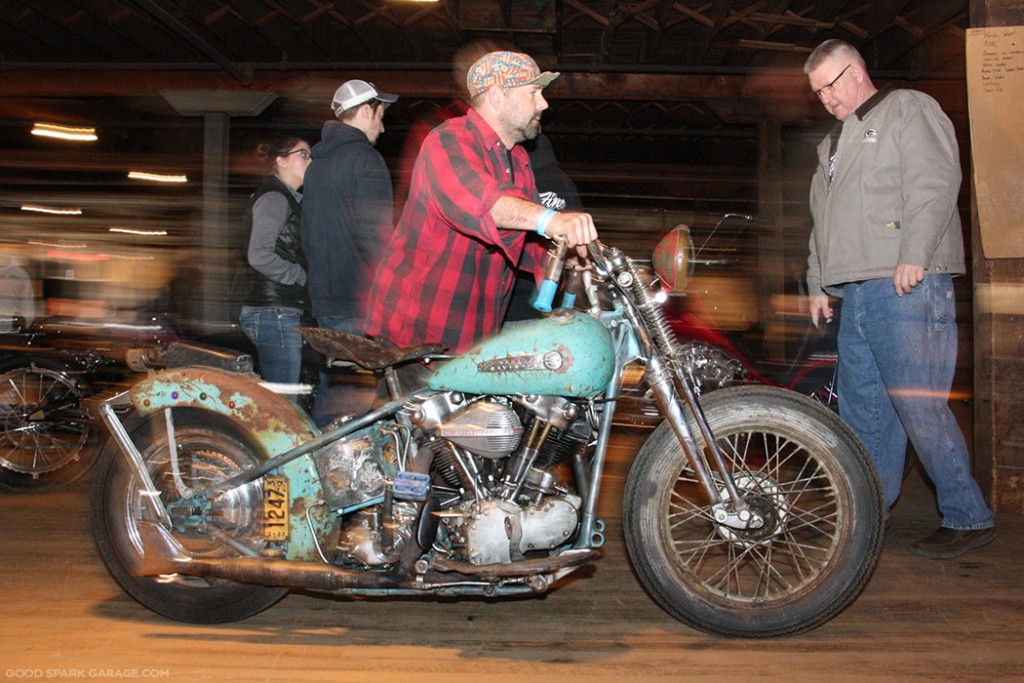 Motorcycle culture is alive and well at Mama Tried. We’re thankful to the folks who put in the hours to host such a concentration of bike-centric fellowship. Long after all the trendy on-the-surface stuff of today’s motorcycle realm fades, it’s this kind of authentic show that will rise to the top of minds and memories. Many years from now, when my grandkids see a pic of this Milwaukee event, I’ll tell ’em I was there – and they’ll think that’s pretty cool. 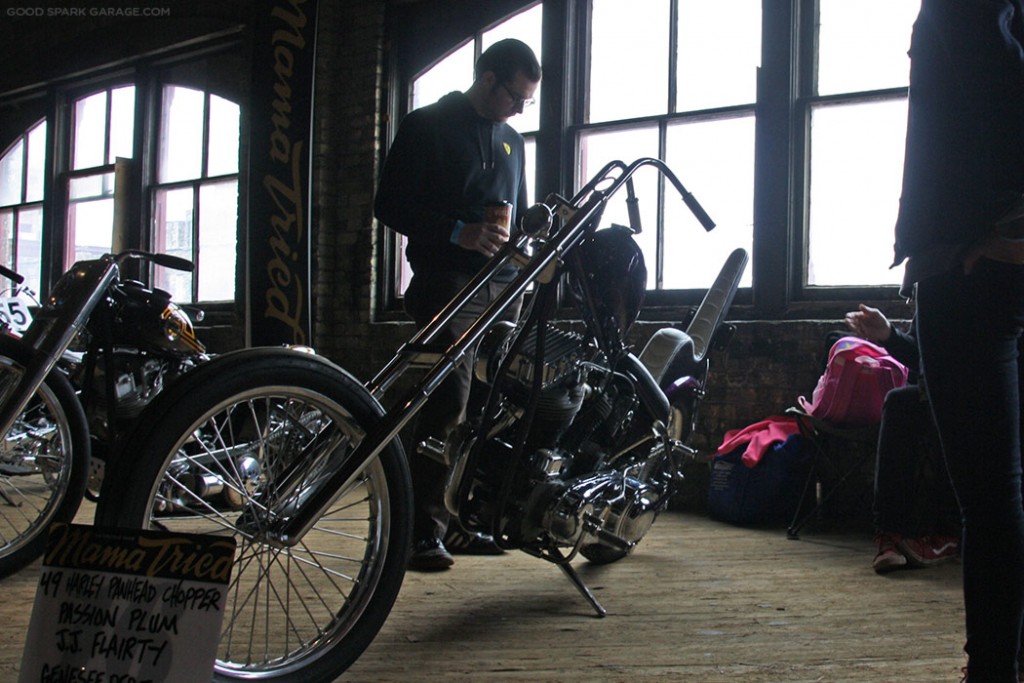 Ever stare at an old pic and wish you could jump in during that very moment?…