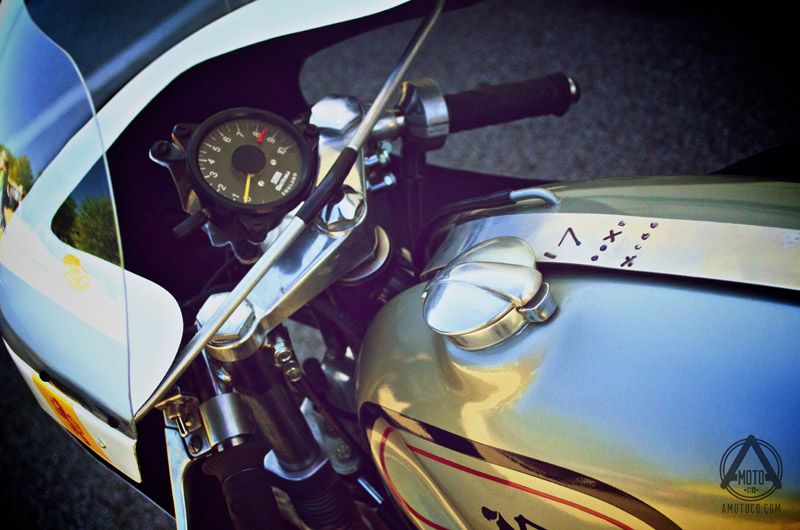 Eric Anderson is an Indianapolis-based photographer and motorcyclist who creatively captures the mood that emanates from fuel-burning machinery. As an architect, evidence of his trade shows up in his work; he creates strong compositions where the hero of the image is often metal framework or a mechanical harmony of engine components. We wanted to share with you a window into the world of AMotoCo: Moto Inspired Photography.

GSG: What kind of motorcycles inspire you or beckon you to photograph them?
Eric: I love motorcycles that have a story, meaning those that have visibly been ridden long distances or raced, have years of patina or hold a historic place in the industry. I think the singular and simple act of trying to go faster than anyone else is powerful, so racing machines carry a lot of sway in my mind and I tend to gravitate towards them. 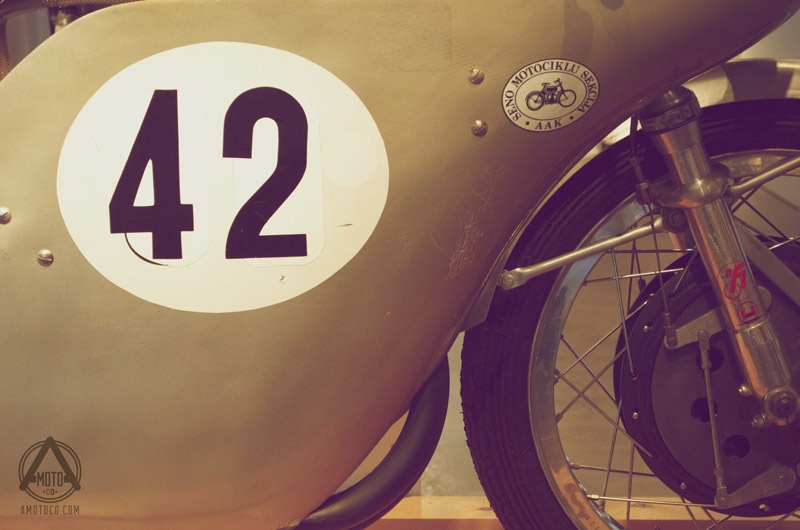 GSG: What do you currently ride and how were you introduced to motorcycling?
Eric: Currently I have 5 full bikes, although some are technically projects. The runners are a 2007 Ducati Sport 1000, a 1993 Moto Guzzi 1000s and a 1965 Honda cb450 or “Black Bomber.” They’re all modified and they’re all cafe racers. The projects are a 1972 Honda cb450 (currently being built into a psuedo endurance-racer-styled street bike) and a 1965 Honda cb160 (this winter’s project).

I think it’s safe to say that my introduction to motorcycling happened before I can even remember.  My father had a number of street bikes and dirt bikes before I was born and for a while after and my mother even had her own dirt bike. I’m told that some of my first drawings were of motorcycles, so I’m guessing it was somewhat bred into me. About 10 years ago I joined the motorized 2-wheeled world with a European-market 1978 Vespa p200E, but can’t really remember exactly what prompted me to do so. It just felt like the thing to do!  Shortly thereafter I bought a 1974 cb750 at the urging of my great friend Adam Ratcliff and haven’t looked back since. 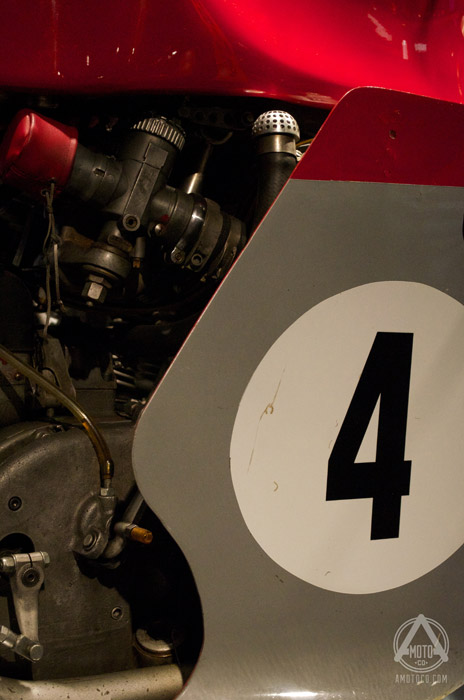 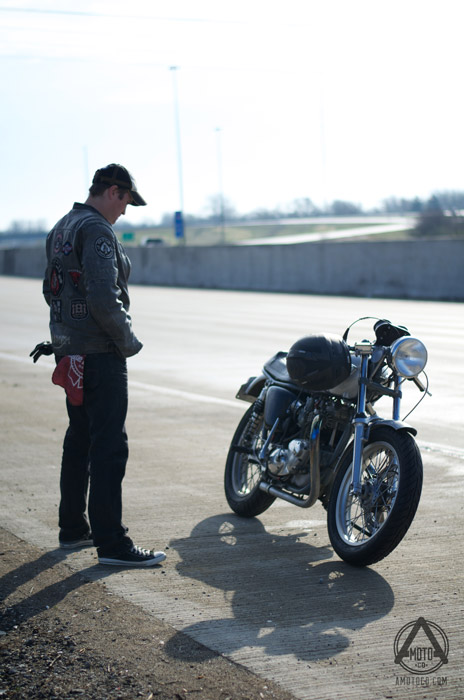 GSG: Some photogs focus on landscapes or portraiture, what led you to vehicle-related photography?
Eric: I have a passion for vehicles, both 2-wheeled and 4, so it’s easy for me to stay excited about it.  So much of great photography is also being in the right place at the right time and I’m just naturally around vehicles more than I find myself sitting in a pristine landscape.  While I appreciate good photography of any sort, because of my architectural career I don’t have enough time to wait for the right light while chasing the ephemeral “perfect landscape” or to spend all day to set up a studio portrait session. I guess I’d rather be around motorcycles or cars when I have free time!

GSG: Some might say polished metals and gloss finishes are a headache to shoot; how do you rise to the challenge?
Eric: Most of my current work is shot with available light and how you use that is a huge part of what makes a good photo.  The other big part of a good photo with a lot of reflections (beyond composition) is the environment the subject is sitting within. Making sure odd things aren’t seen within those reflections can be a bit of a challenge. Nobody wants to see the photographer’s reflection in a fuel tank or muffler! 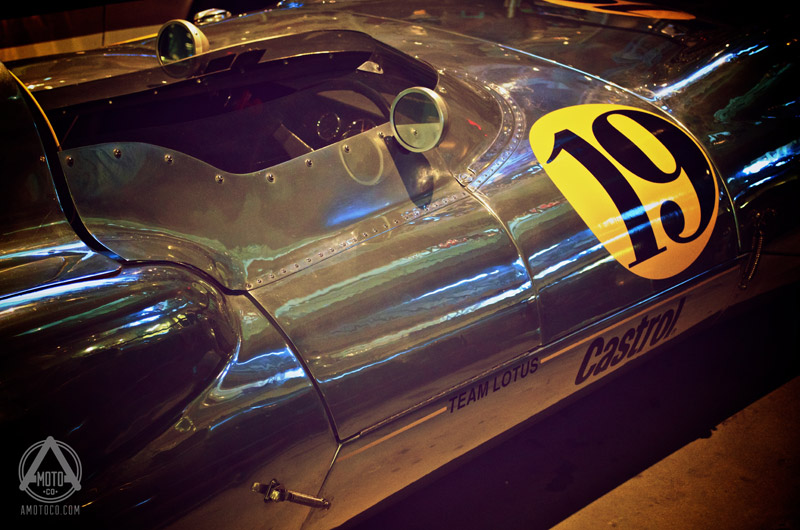 GSG: Would you accept commissioned work or do you mainly sell work based on your pursuits?
Eric: I have done some commissioned work in the past and would gladly accept more, but with my career it makes it a bit hard for me to do so on a regular basis. If a potential client is willing to work with me on scheduling a shoot, I’d be all for it. 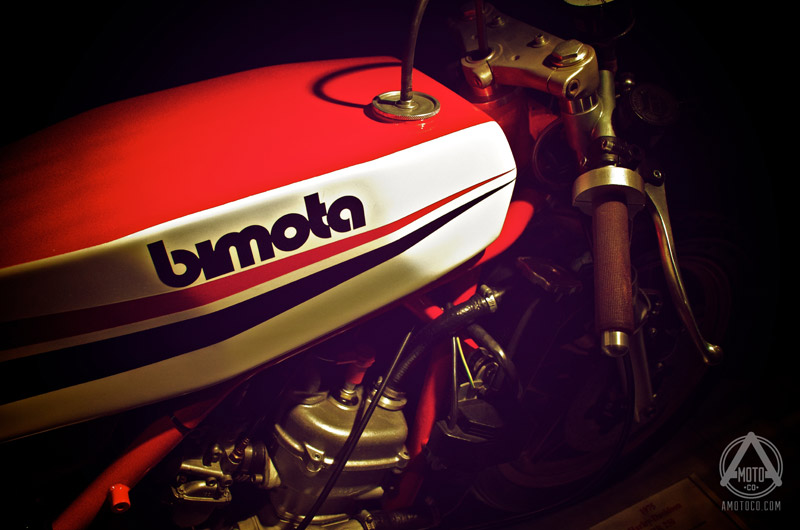 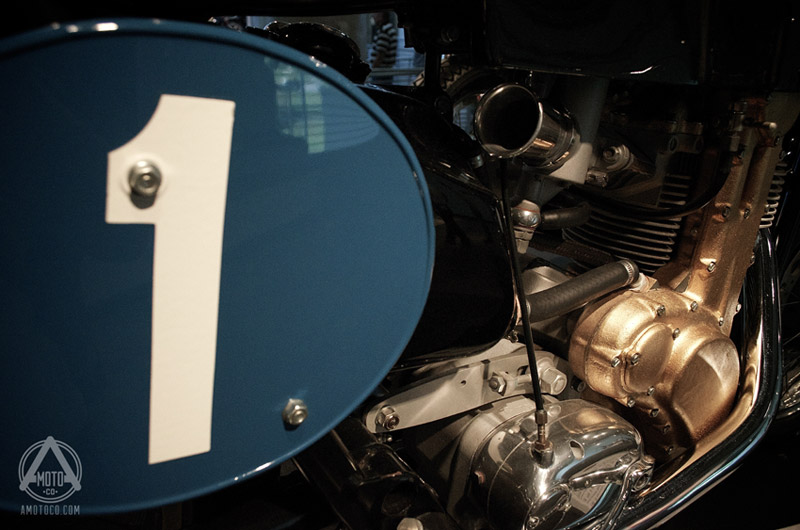 GSG: Is there a specific vibe you want to create for the viewer? What is a common reaction you receive?
Eric: At a base level, creating artistic compositions out of machinery that most (outside of the motorcycling world) might consider uninteresting is one thing I strive to accomplish. To those people that are within the motorcycling world – I hope that same methodology helps them see a motorcycle in a more artistic way than they had previously thought. At a higher level – (and something I still need to improve on) telling the story of the subjects and situations I photograph or creating meaningful connections between those subjects and the viewers is a goal of mine. While that’s not really a “vibe” and more of a universal photographer’s struggle, it’s something that’s always on my mind when I’m shooting. 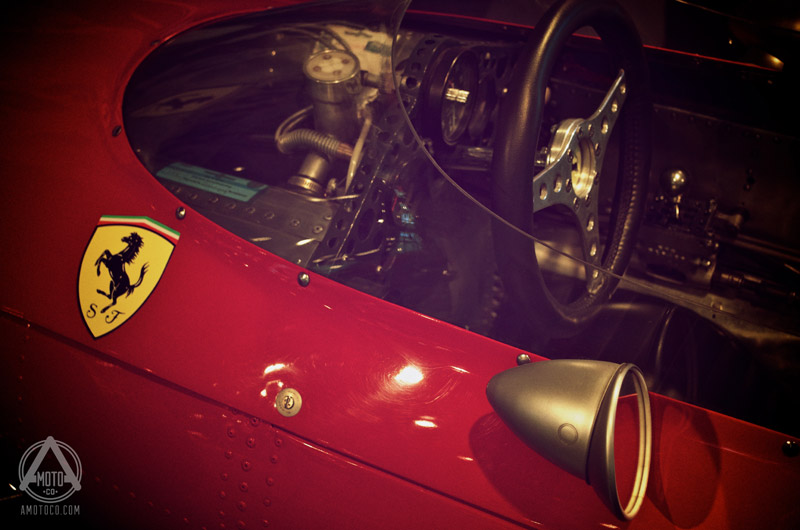 GSG: What’s next for AMotoCo?
Eric: That’s a good question! A goal of mine is to make a more concerted effort to travel to major motorcycling events and locations. I’d love to head to the Bonneville Salt Flats again, attend The Quail, the Isle of Man TT, Goodwood Revival and others. Luckily, I have a wife that loves to travel and doesn’t really care where we go! 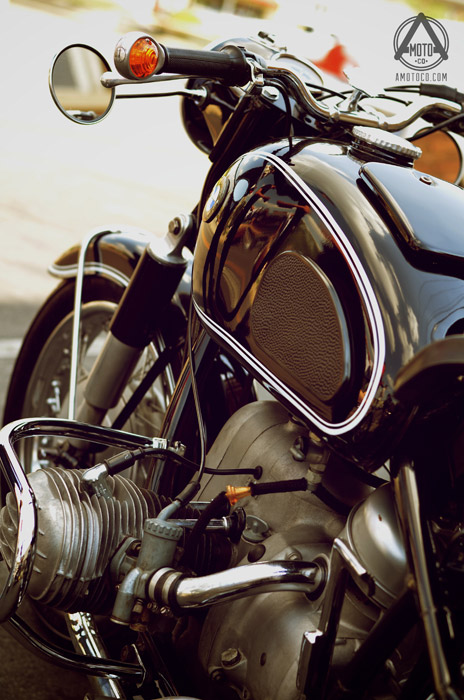 Keep an eye on Eric’s evolving collection of photos and hop on over to his Etsy shop to buy prints in various sizes: AMotoCo: Moto Inspired Photography. They’d be a great addition to the walls of your studio, garage or motorcycle man cave (ya know, Father’s Day is coming up).

All photos featured in this post originated from AMotoCo Photography. 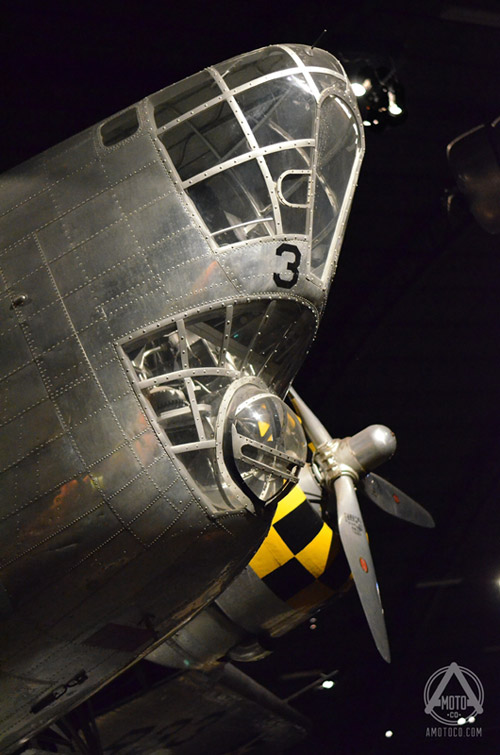 May 2, 2014: This year's trophy unveiling downtown in Fountain Square was a great opportunity to…

Dare Devil Alma and the Wall of Death

In the early to mid 1930s, a British gal named Ellen rose to fame as a…