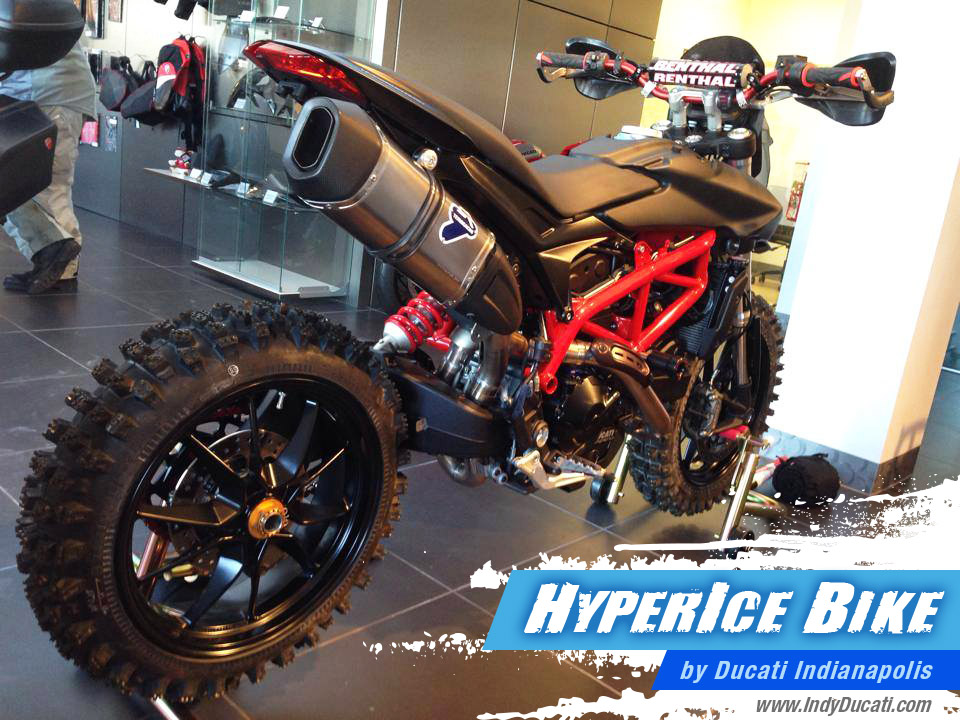 The guys at Ducati Indianapolis have self-prescribed a cure for the winter doldrums. They’ve mixed up a wicked dose of ice-shredding madness built from a “dark stealth” Hypermotard. It’s not often we want to immediately run out the door to catch a glimpse of a showroom-new bike, but this one got our attention. Especially in the crippling cold Hoosier landscape that’s had us shut in for faaaar too long. 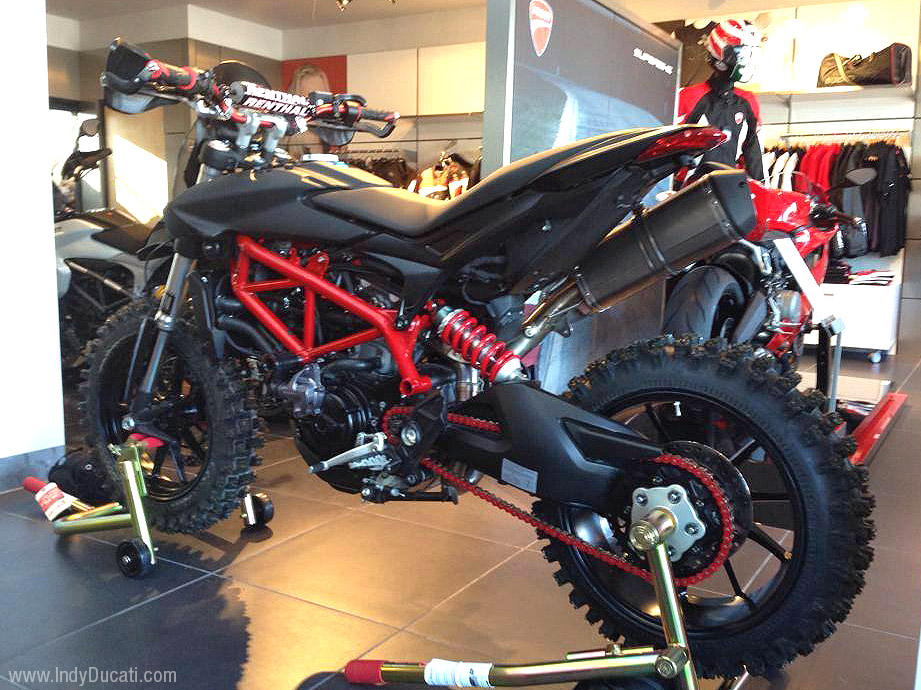 We talked with Matt Carr, Co-Owner and Service Manager, about the inspiration behind the bike. He says it was inspired by the fun he’s had in the past on dirt bikes fitted with ice tires, a solution for when his other bikes were parked for the winter. The team at Ducati Indianapolis hopes it stirs motorcyclists’ interest in extending their riding season; it may require warmer gear, but that can extend the amount of fun per year on a motorcycle!

“We had a customer ride in last week when it was 4 degrees, and he was smiling! It is all about the gear and the positive attitude.” 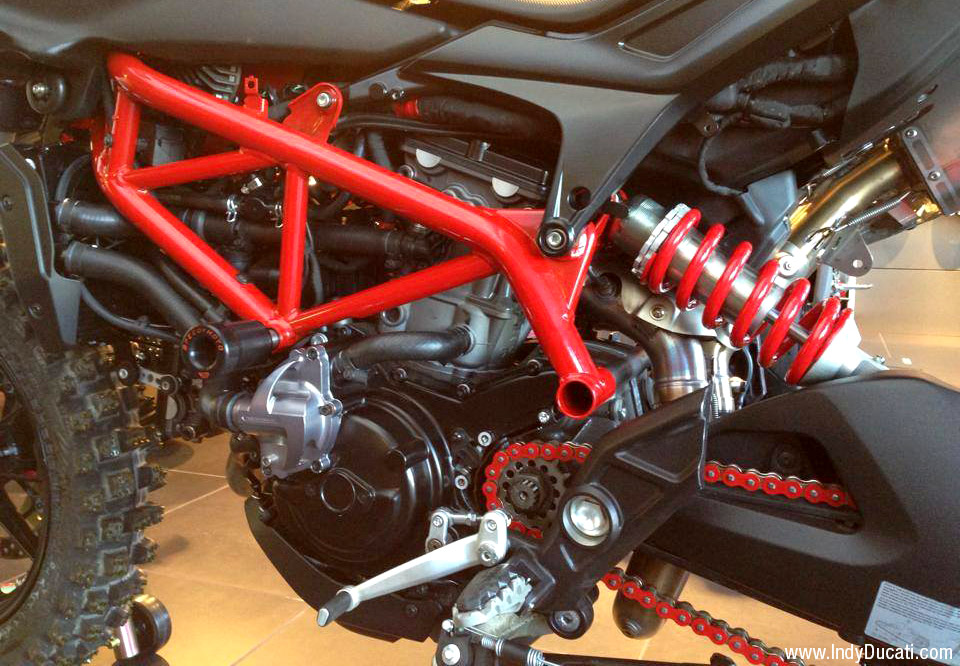 Matt shares his notes on the performance/engine mods on the Hypermotard: “The engine is stock, but we modified the intake and exhaust systems. We went with the Termignoni full exhaust system and ECU which added 5 horsepower and dropped about 15 pounds. For the intake we removed the airbox and went with individual pod filters that surprisingly added another 4 horsepower. There are plans for a big bore version of the engine but I can’t confirm at this time if that will come to fruition.”

The CarrMoto team removed the bodywork around the tank to simplify working on the bike. “The tank has such a nice shape that after we painted it black, it blended right back into the bike and allowed a better view of the red trellis frame.” Most of the trim pieces were taken off and the passenger peg brackets were cut off, dropping the weight and tidying up its overall looks. They liked the stock riding position, so the similarly shaped Renthal bars were a close match, but much stronger in the event of a crash. “We raised the front of the bike by sliding the forks down through the triple tree 12mm, which allowed clearance for the ice screws and the cylinder head. We raised the rear to match the front and changed the rear spring to a linear spring.” An additional nice touch, the rear spring was powder coated red to match the frame. They had done some street and dirt testing on the stock suspension before the Hyper Ice mods and determined that the stock set-up works really well.

When asked if there were any challenges with the tire set-up, Matt says, “Yes, absolutely. Because the ice screws are 1½ inches long the street tires require another tire inside them with the sidewalls cut off.  Without this liner, the tube would obviously get punctured. The downside is trying to get the tire mounted without damaging the rim. The entire ice screw/tire/liner/tube assembly makes an incredibly stiff and unforgiving sidewall experience. What we have learned is that it is probably better to have the entire tire/liner/tube assembly mounted on the rim and then put the screws in.” 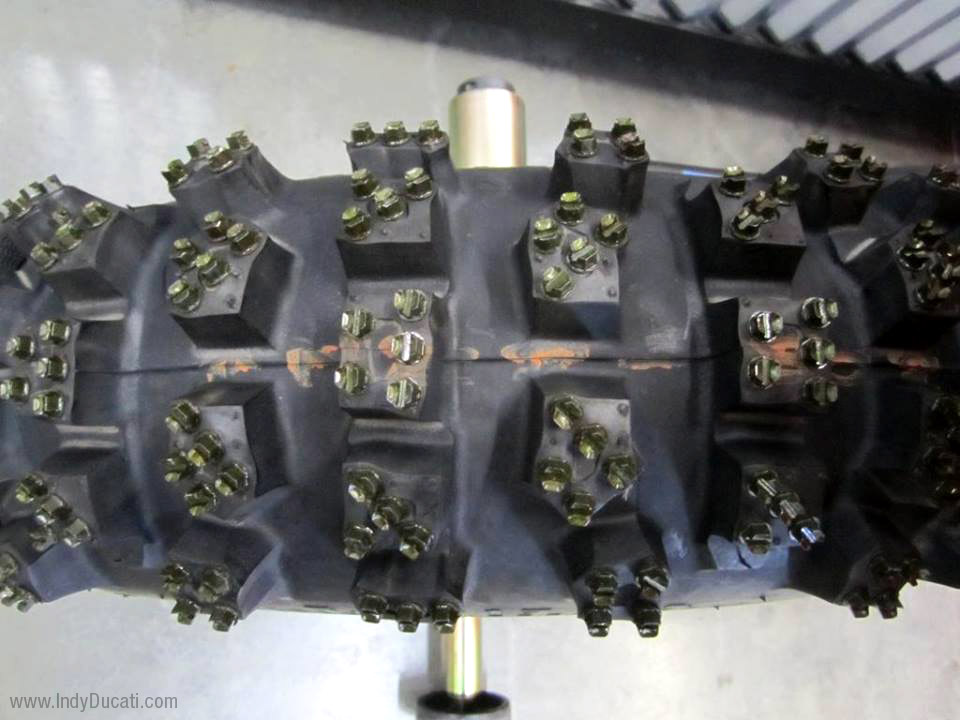 Where and when do they plan on letting this thing eat? Fox Lake in Wisconsin, north of Milwaukee, will act as testing grounds in mid-February.  Many of CarrMoto’s extended roadracing family will be there. If they need to search for better ice, they’ll travel further north. “The next group of extended roadracing family is in Minneapolis. We have also been getting a lot of invites and suggestions of places to go, which we are very open to.” They plan on filming the entire journey and hopefully share videos on Facebook and YouTube. With GoPro’s running on the HyperIce and their accompanying dirtbikes, they hope to produce and edit a 30-40 minute video about the entire adventure. 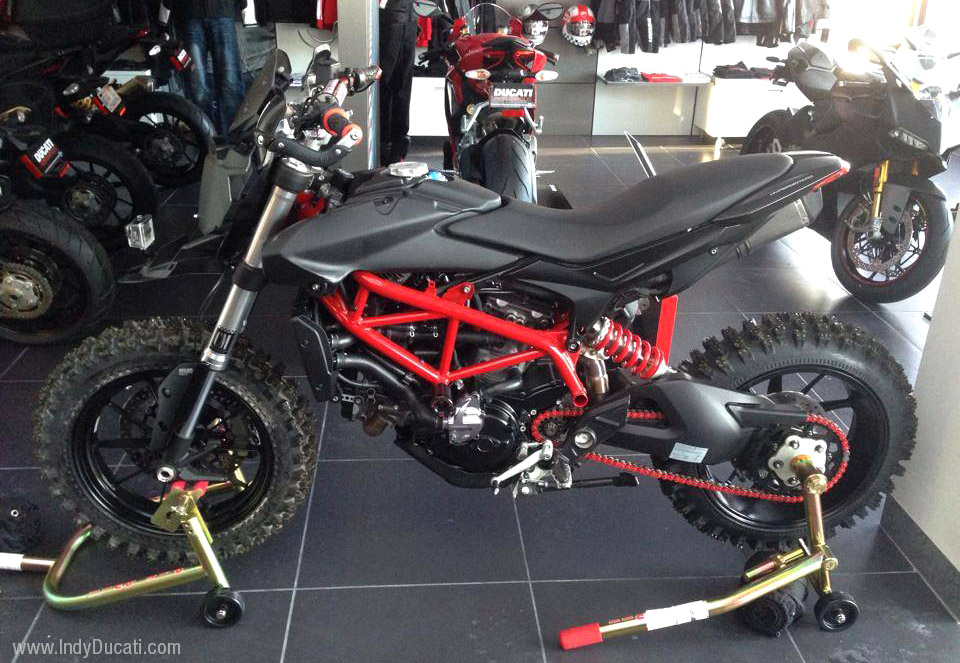 We were curious about the future of the HyperIce Bike and learned there will be HyperDirt and HyperTrack versions coming. Matt explains, “We will use another set of TKC-80’s on the dirt and slicks for the racetrack.” They also have another HyperIce Bike in the works for a client, which will roll out in mid-February as well. “We have heard this bike will be catching some serious air off a dirt jump with a special guest rider after the ice melts.” Believe me, we here at GSG are tuned in. 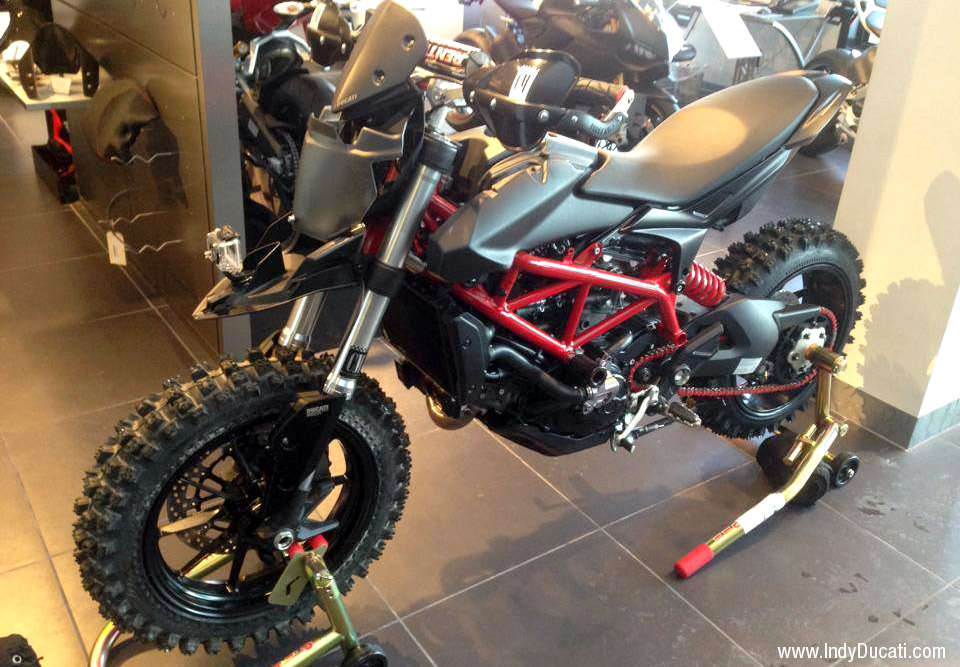 Matt and his team have perfected their moto-wizardry for years, but they’re quick to acknowledge when outside sources have aided their efforts.  “Jeff Fredette of Fredette Racing Products made the tires for us and he did an amazing job. Jeff is one of those guys that doesn’t let the weather stop him from riding. Brian, from Drive Systems, hooked us up big time with a Superlite Ducati Hyperflex Quick Change Sprocket Kit. Gearing is really important for this bike as it needs to change quite a bit for each discipline. We have 14,15, and 16 tooth front sprockets and rear sprockets ranging from 40 to 45 teeth. SpeedyMoto is a great supplier and we had their billet water pump cover and frame sliders in stock, so on the bike they went. We have just become a Cox radiator guard dealer as well, so we installed one of those too.”

“In the last few years I have seen more holes in radiators than I would like to, so we consider the radiator guards a necessity now. Imagine a screw coming out of the tire and going right through the radiator. Ouch!”

In addition to the Renthal bars, they chose Cycra hand guards to protect their hands, levers and switchgear. GoPro hooked ’em up with the cameras needed to document the entire project. 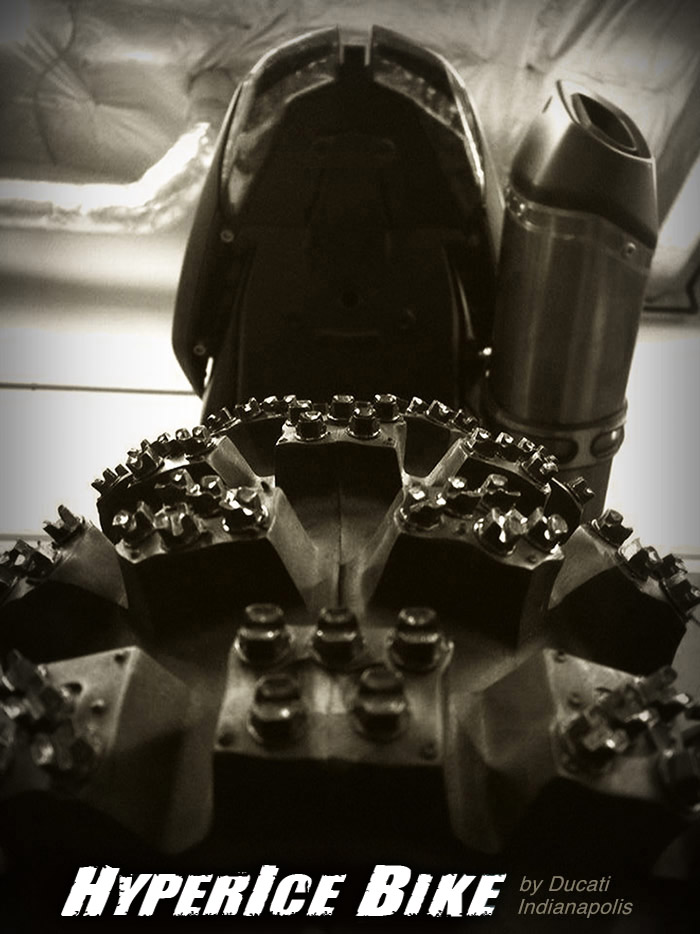 Matt adds, “we enjoyed removing things from the bike as much as adding them. If you look at the HyperIce now, it all works so well it is hard to imagine we removed anything.” They have all the items they’ve removed in one big box, “and it is heavy!” Of course, he credits and thanks his team for tackling this project, “especially the technicians back in Service Department who did most of the hands-on work.”

We wanna ride this thing. Bad. But we’ll settle for a watching a YouTube vid that the guys will hopefully upload in the not-so-distant future. Keep it tuned in to the CarrMoto team on Facebook or their website, Ducati Indianapolis, for more on the HyperIce Bike.

During MotoGP weekend in Indianapolis, the motorcycle scene comes alive. One of the happening spots is…