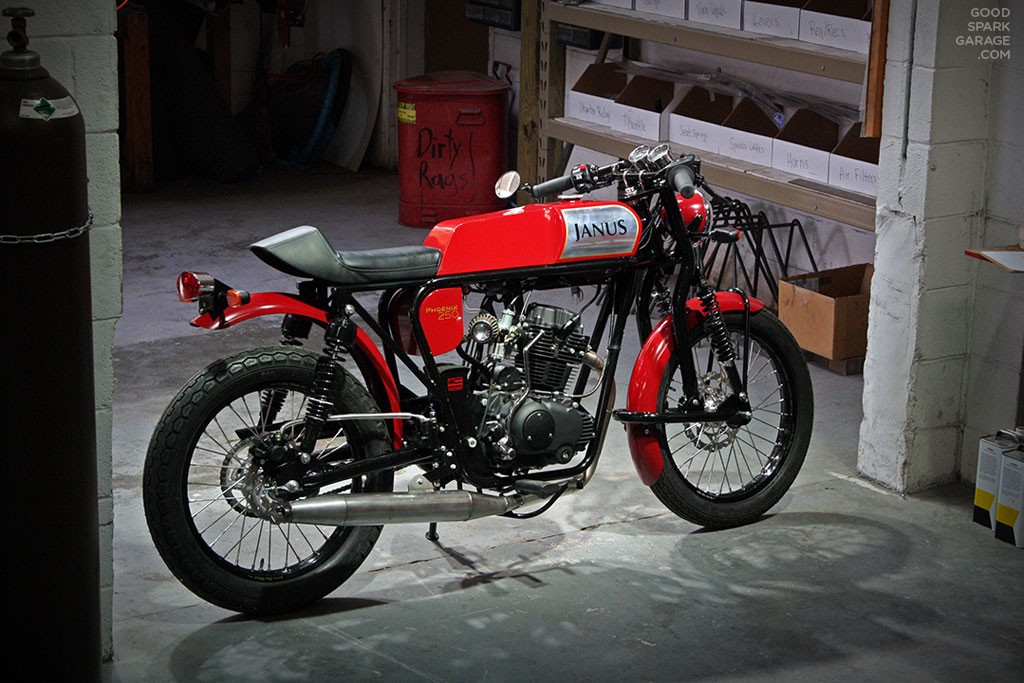 When you roll into Northern Indiana Amish Country, you can’t help but relax and wonder what life is like in its rural fields. Vast farmland envelops the hustling, bustling towns of Elkhart, Nappanee and Goshen, where hardworking Hoosiers reside. The Biblically-named Goshen is where we visited the downtown garage of Janus Motorcycles, which neighbors the city’s first coffeehouse and a uniquely-curated record shop. In the motorcycle realm, Janus is different; a good different. Here’s why…

Our initial assumption about Janus Motorcycles was one thing. Our face-to-face experience with them was another. Casey and I drove up the highway from Central Indiana to drop in on the Flight of the Phoenix Launch Party, where their latest motorcycle was introduced. Based on the amount of interaction we had with Janus founders, Richard Worsham and Devin Biek, our conclusion is that they’re good, humble guys, as is their support system of friends and family. Their products are carefully crafted, too, presented with pride rather than overinflated egos. We wondered: does the shop’s environment and location make a difference? We believe so. 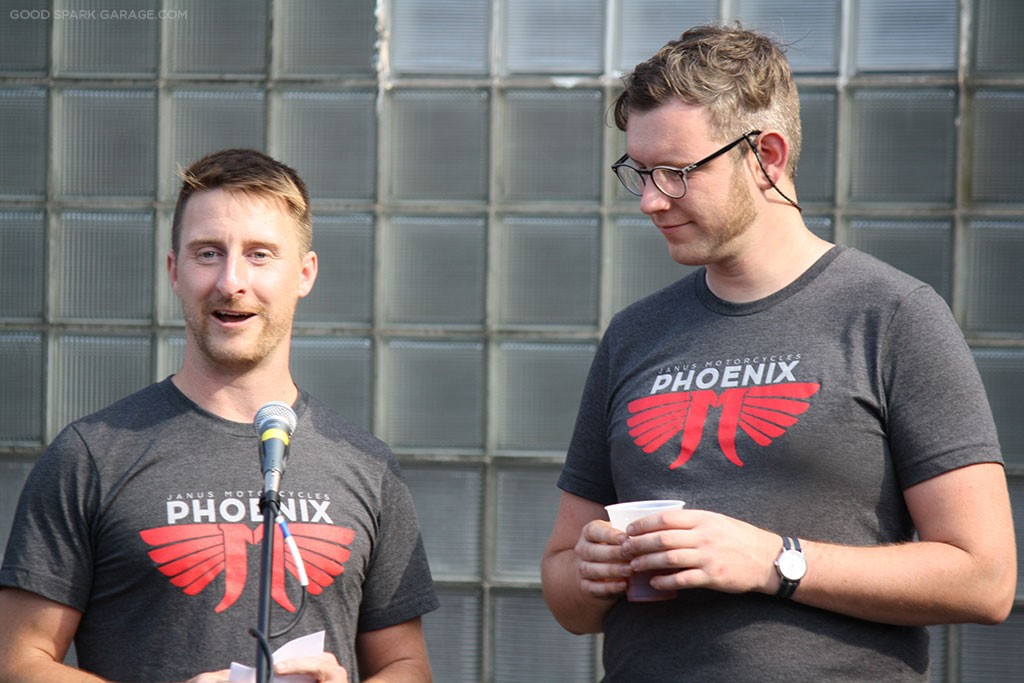 In today’s U.S. motorcycle market, you make headlines for producing over-engineered, overpowered motorcycles. Some folks tend to fawn over internet-famous bike builders of bespoke one-offs. From their Goshen garage, Janus garners lots of online respect and nods from motorcycle publications, but these guys aren’t vying for millions of digital thumbs-up. They are craftsmen who keep their nose to the grindstone, drawing and wrenching in their block-walled, back-alley shop.

From the seats to the welds to the handlebar bends, they collaborate with the kind of craftsmen we admire; ones who let their work take center stage. Richard says that he, Devin and their team of designers and makers “are enjoying the process,” with a goal of creating a motorcycle for “people who appreciate beautiful machines.” 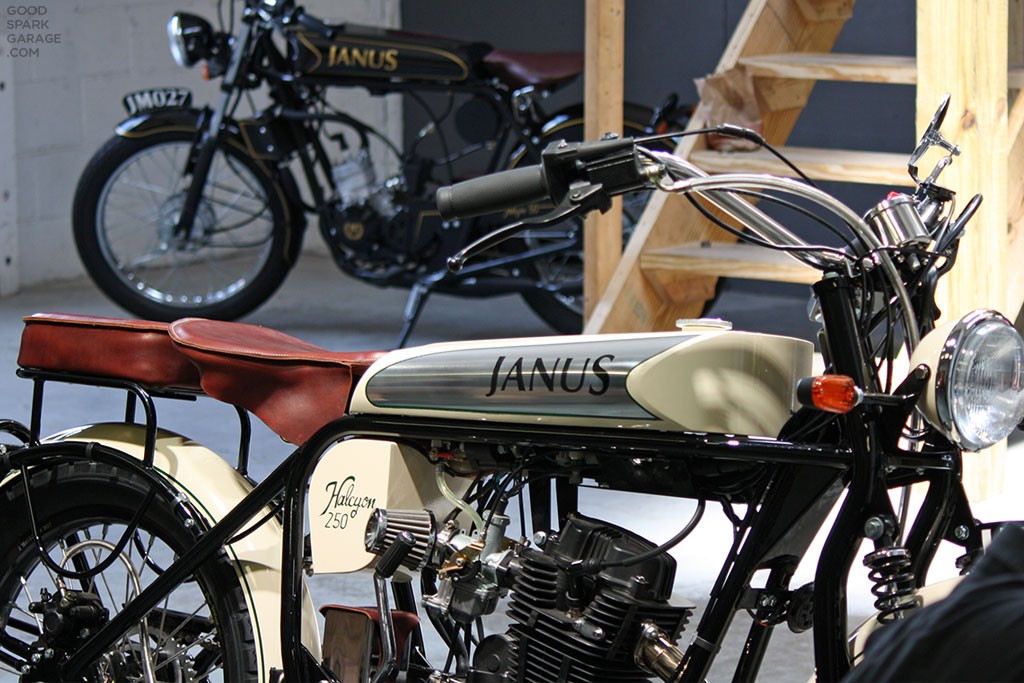 This article is not an assessment of specifications or performance of either the Halcyon 250 or the Phoenix 250. We are aware of the bikes’ cost, their horsepower, their engine’s origin and the opinions they stir up. We simply wanted to find out what kind of team has the ability or guts to dive headfirst into industry waters that can be murky, or risky. And, who would have the audacity to artfully approach manufacturing in a State that outsiders would consider far too conservative.

We think back to the height of auto manufacturing in Indiana, when companies focused on putting quality cars together piece by piece. Cities like Albany, Kokomo, Connersville, Elkhart, Wabash and others, produced finely crafted cars like Duesenbergs, Cords, Crosleys, Haynes and Studebakers. As early as 1909, Indiana was second only to Michigan in the number of autos produced. The spirit of this movement is present at Janus, with bikes that evoke a nostalgic vibe. They hearken back to the days of limited-run vehicles with a fine fit and finish. 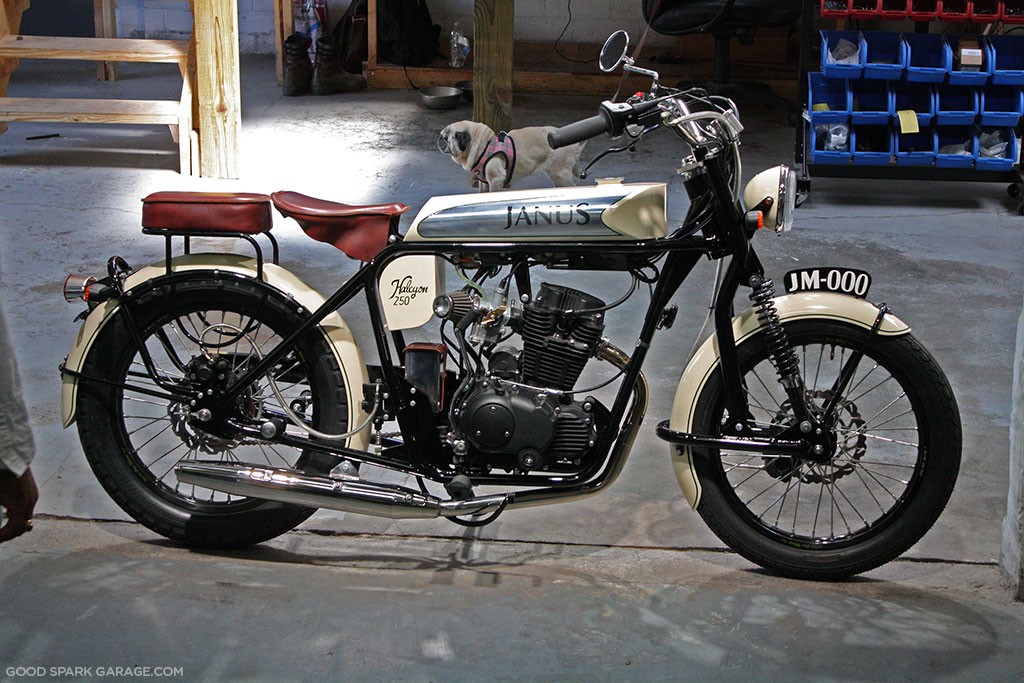 Residents of the area are well aware of the large amount of creative and resourceful talent nearby. The Janus leatherworker is local and an expert at saddle making and horse tack. They have several Amish craftsmen and blue-collar tradesman with a desire to see the bikes end up in the hands of appreciative owners. This isn’t about a hurried assembly line that has to keep up with a massive marketing push.

How does its location compliment the company’s persona? We’ve witnessed brashness and braggadocio that can sometimes accompany big-city or coastal confidence, so it was refreshing to walk into this low-key atmosphere. During the launch party, we had a conversation with a Goshen couple about how the city has experienced a revitalization that’s bringing people back to live and work in the town. I told the Janus crew that the couple ended the conversation with, “we hope you’re enjoying your time here, thanks for coming!” Reacting with a smile, Richard and Devin said, “That’s so Goshen!”

The hospitality of this crowd was certainly noticeable and appreciated.

The spotlight shone brightly on the Phoenix 250 that night. Sitting in the shop that clearly shows their moped background, the deep red Phoenix is the sporty alternative to the more dapper looks of the Halcyon 250. The Halcyon began as a 50cc machine and has evolved into a more stout motorbike (they even have a quick-release sidecar outfit in the works). Both bikes feature the same single-cylinder, 4-stroke, 5-speed powerplant and employ leading-link front suspension. 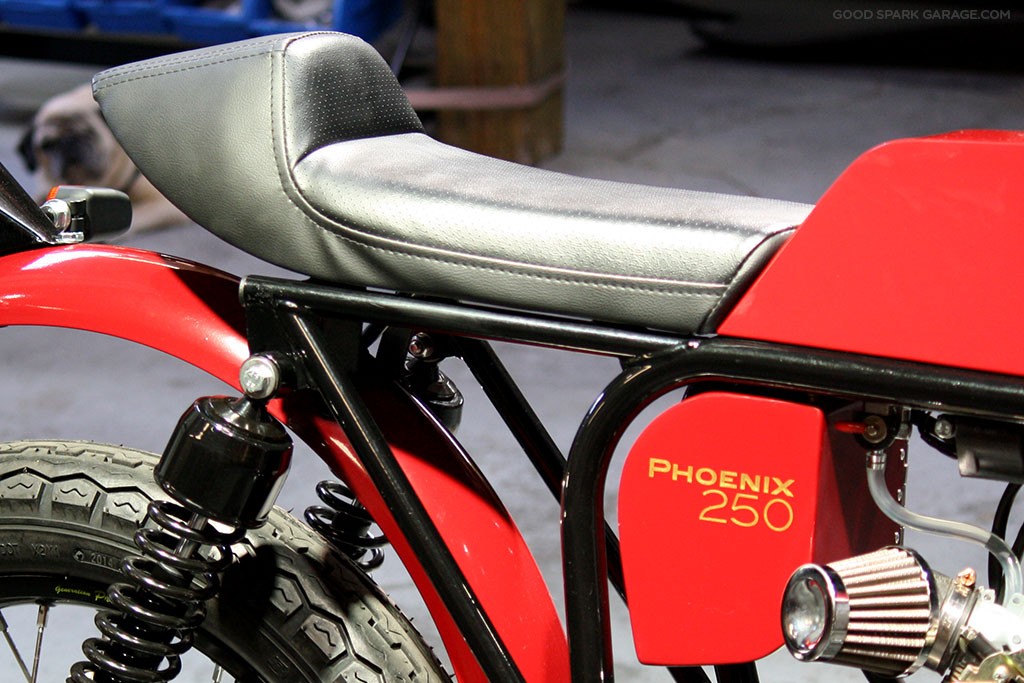 The bikes have a good throaty pop, which we observed when they took a spirited victory lap around the block. The Phoenix weighs in at 265 lbs and can reach speeds of over 70mph. While the Halcyon is a hardtail, the Phoenix soaks up the undulating farm roads much better with its rear swing-arm.

To supplement the launch of this new model, there were a few entertaining bands, great BBQ and a couple tents featuring The Indiana Whiskey Company and Goshen Brewing Company. 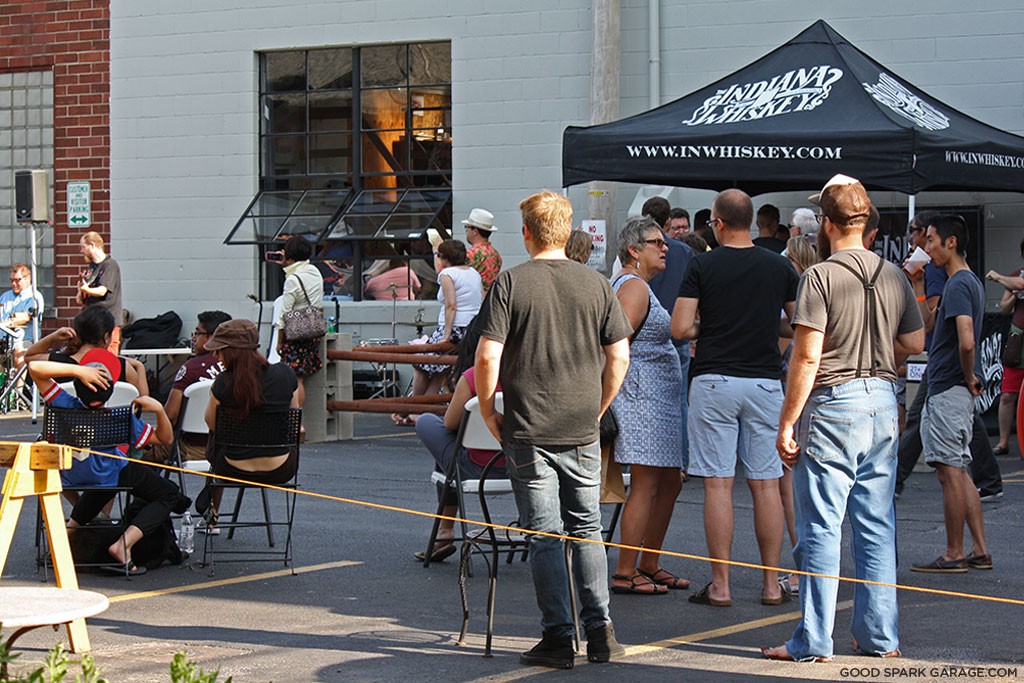 We don’t know what the future holds for Janus Motorcycles, but we’re rooting for ’em and we hope they maintain their Midwestern roots. Can’t help but think that those who end up with a Janus Motorcycle in their garage are securing a special piece of this era’s motorcycle renaissance.

It’s a given that new owners will receive a work of art that has passed through the hands of several artisans.

A big thanks goes out to Richard, Devin, Grant, Amy, Jordan and the whole team for their Goshen hospitality and allowing us some time to learn more about Janus, the bikes, and their backstory. 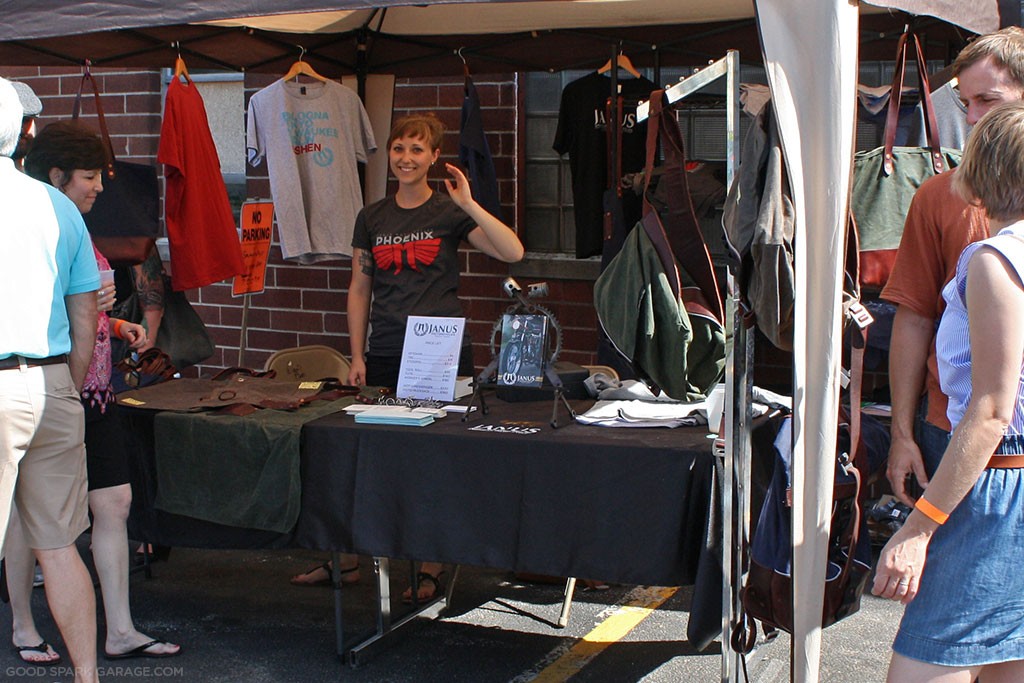 The guys also have a fashionably functional line of Janus Leather and Waxed-Canvas goods. 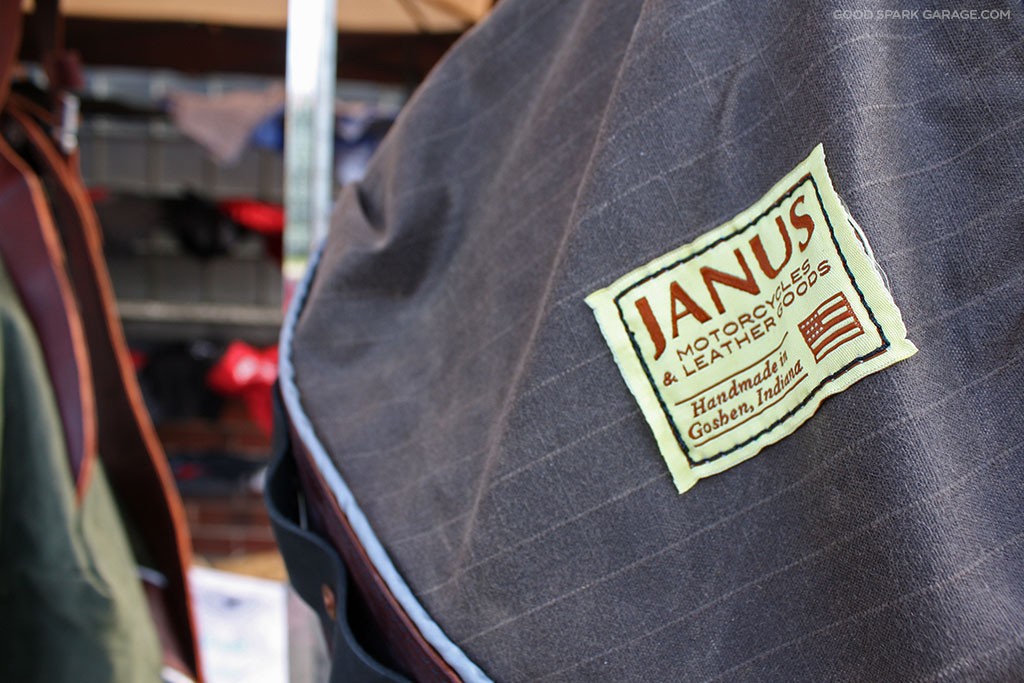 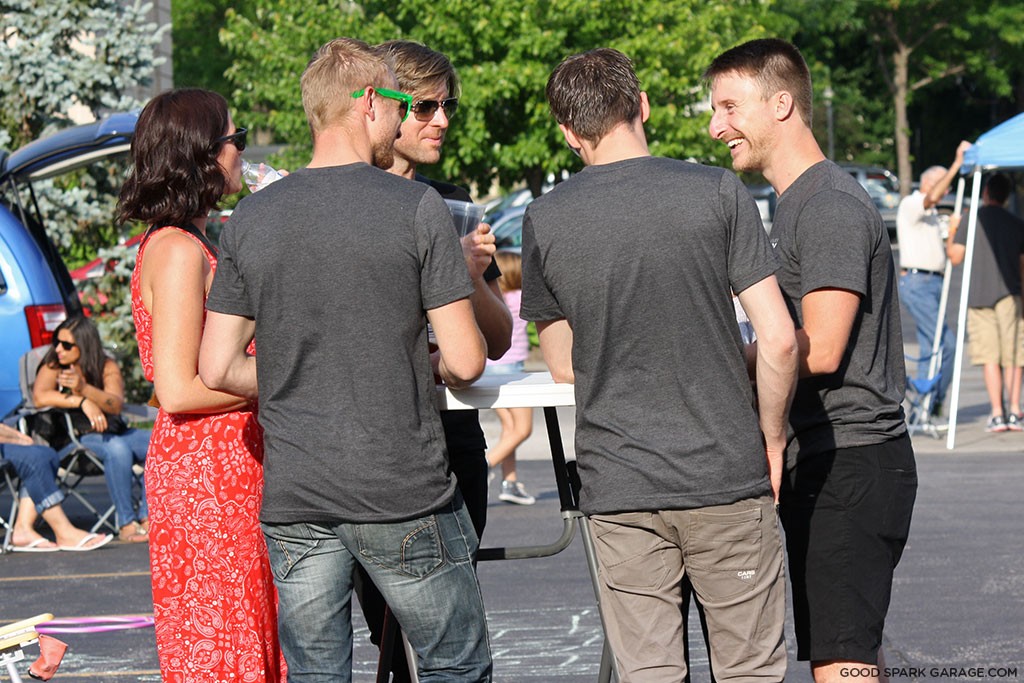 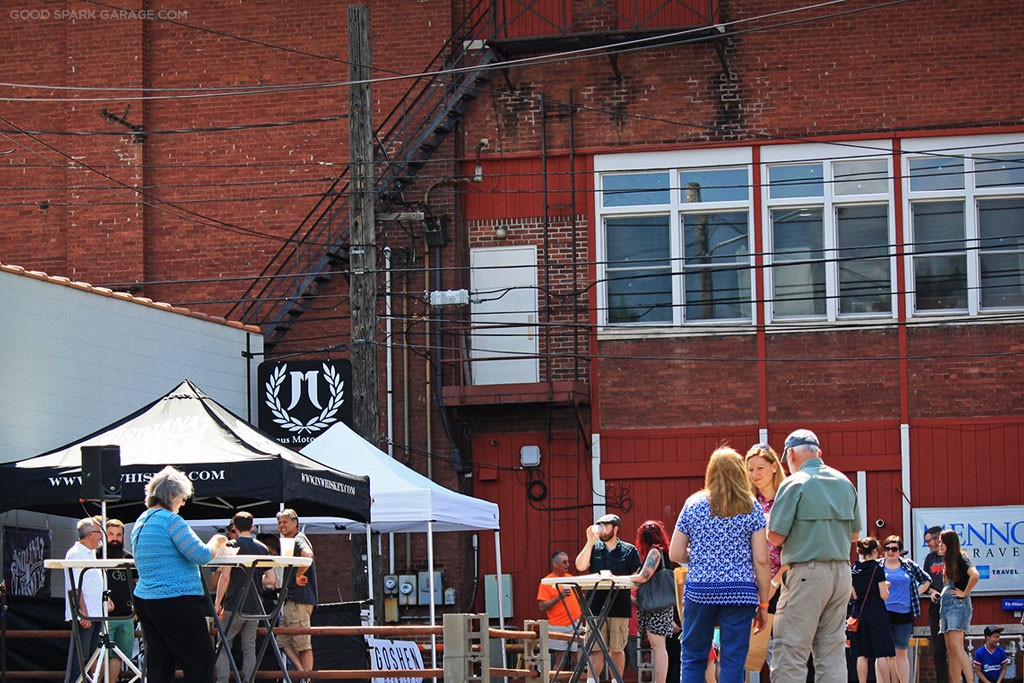 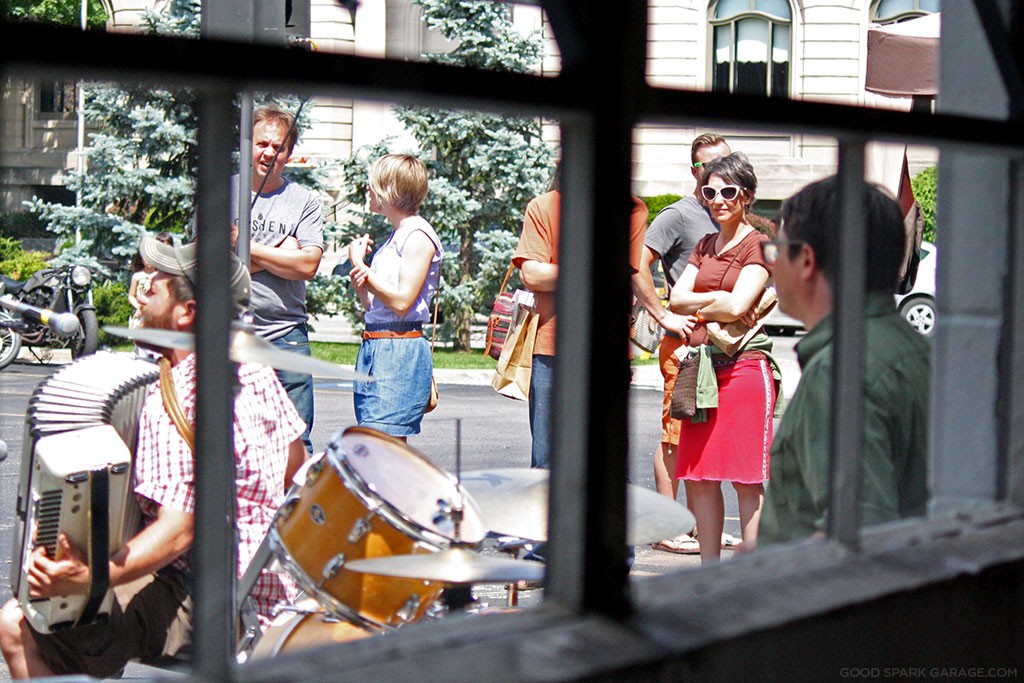 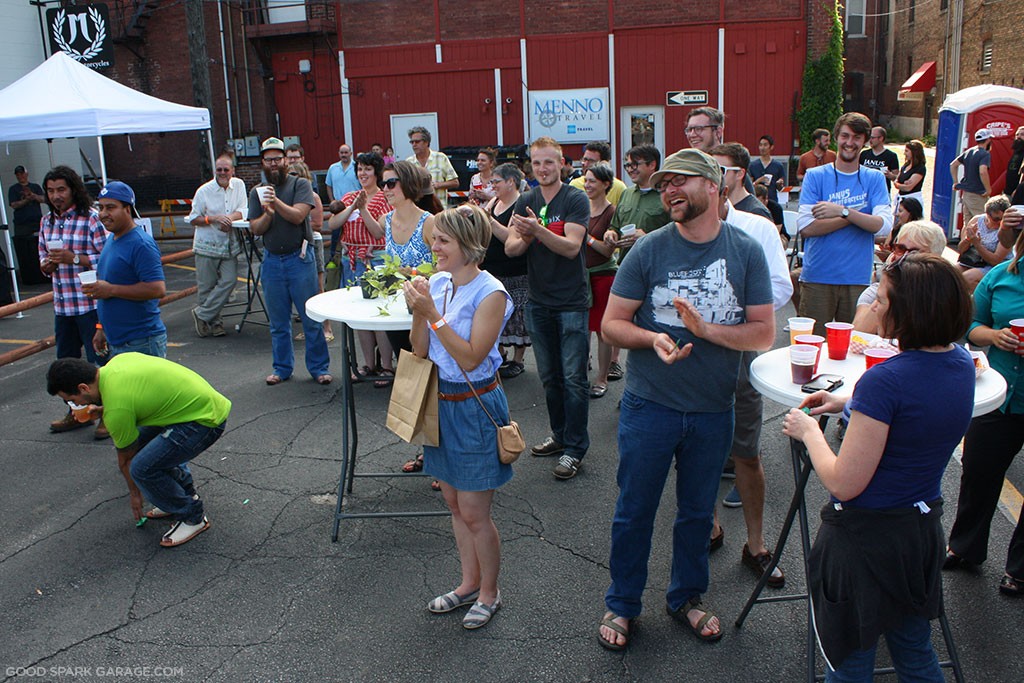 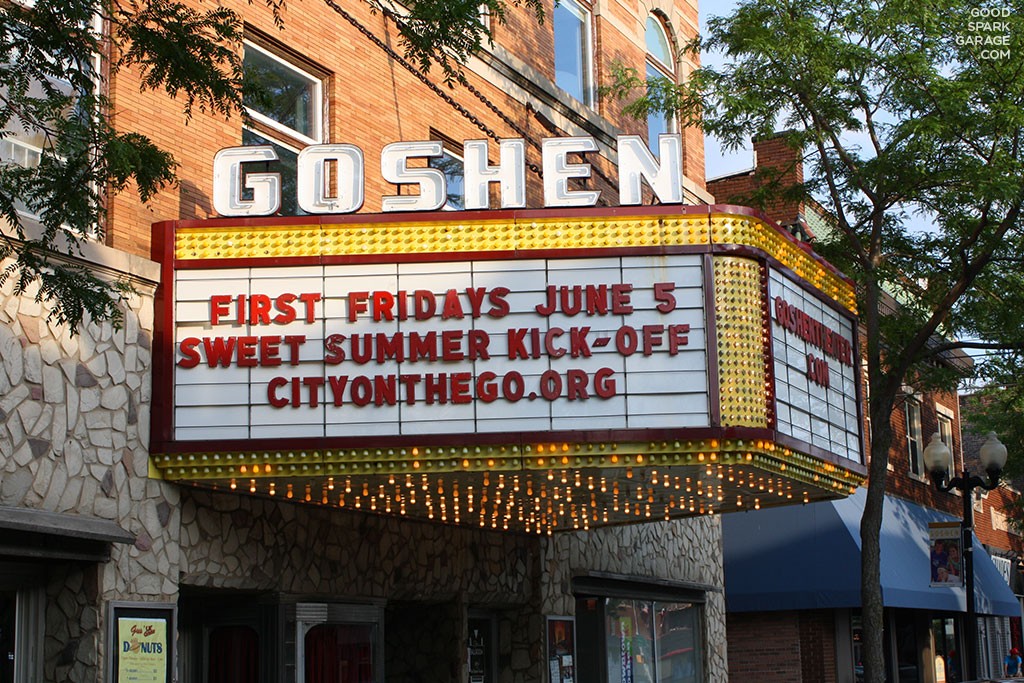 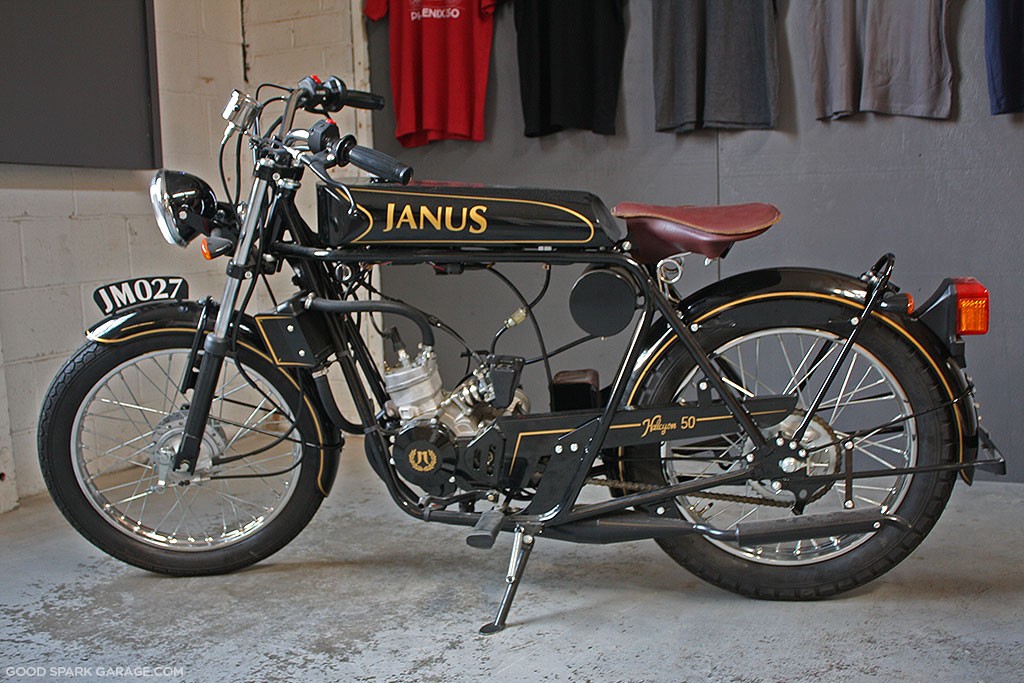 See more pics of this event in our Facebook gallery.