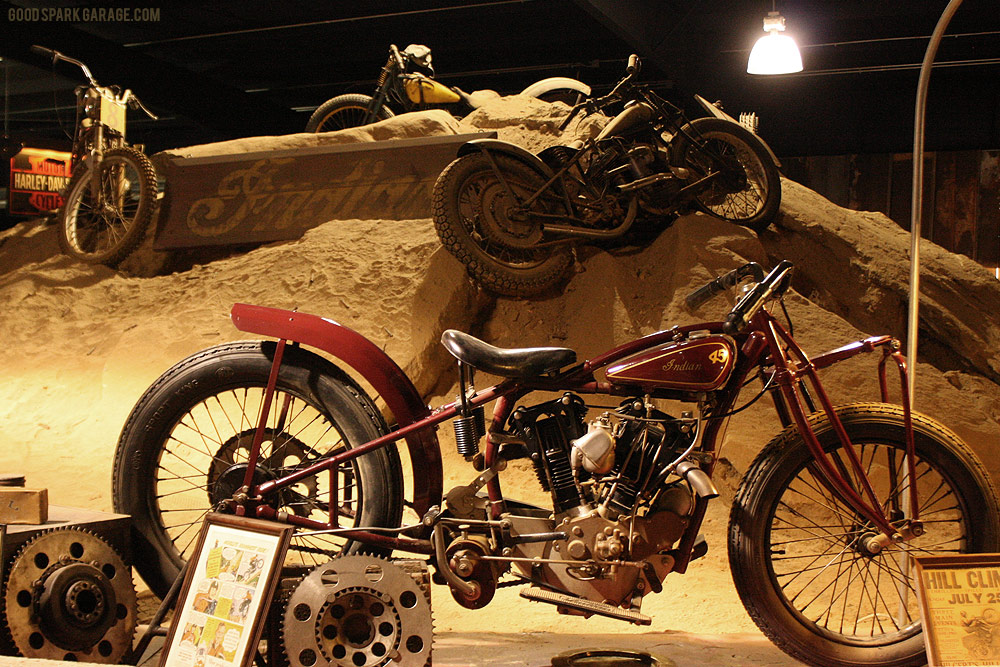 You’ll shake your head in disbelief. You’ll wrack your brain as to how this kind of collection came to be. At Wheels Through Time, just accept it, you’re going to be overwhelmed by the level of incredibly cool vintage American motorcycles housed in this “museum that runs.” This photo-feature helps provide just a glimpse of what awaits you… 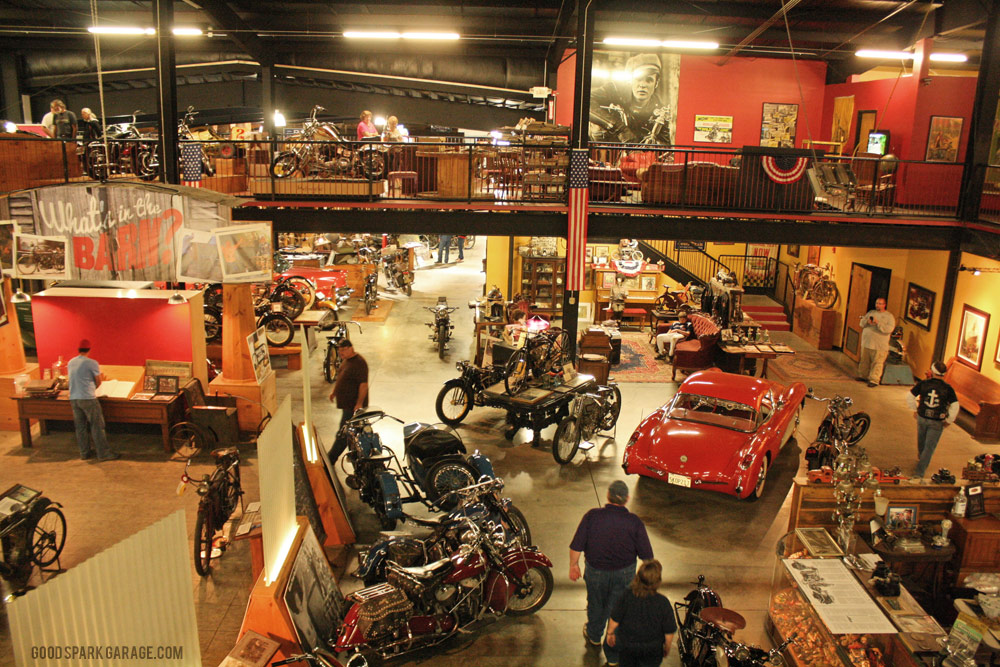 Dale’s eye for creating moto-ambience is the real treat here. His history with and appreciation for Harley-Davidsons shows, they’re all over the museum, but his passion for the entire motorcycle culture that emerged in the early 1900s and evolved soonafter is what makes this place special. 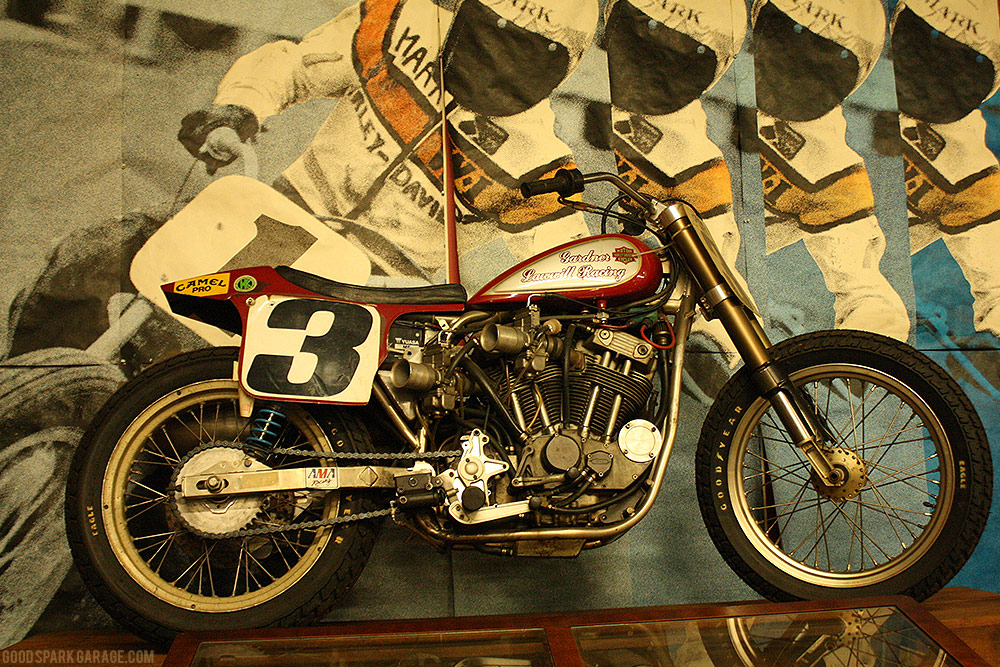 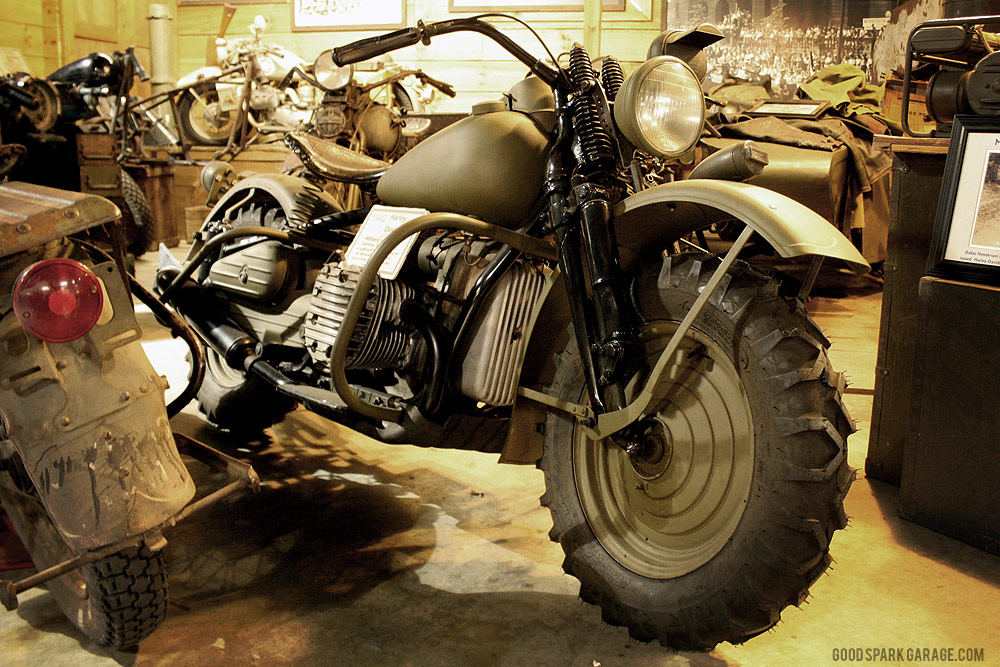 Above and below: I overheard one of the museum staff telling the story of these rare, German-inspired Harley-Davidson XA models. During World War II, HD copied the shaft-driven BMW R71 for their reliability and low-maintenance qualities. After making 1000 units, the US Military never deployed them and years later sold them in crates for cheap. Some were preserved, others were made into streetbikes like the one below. (They’re rare, but Dale has three in the museum.) 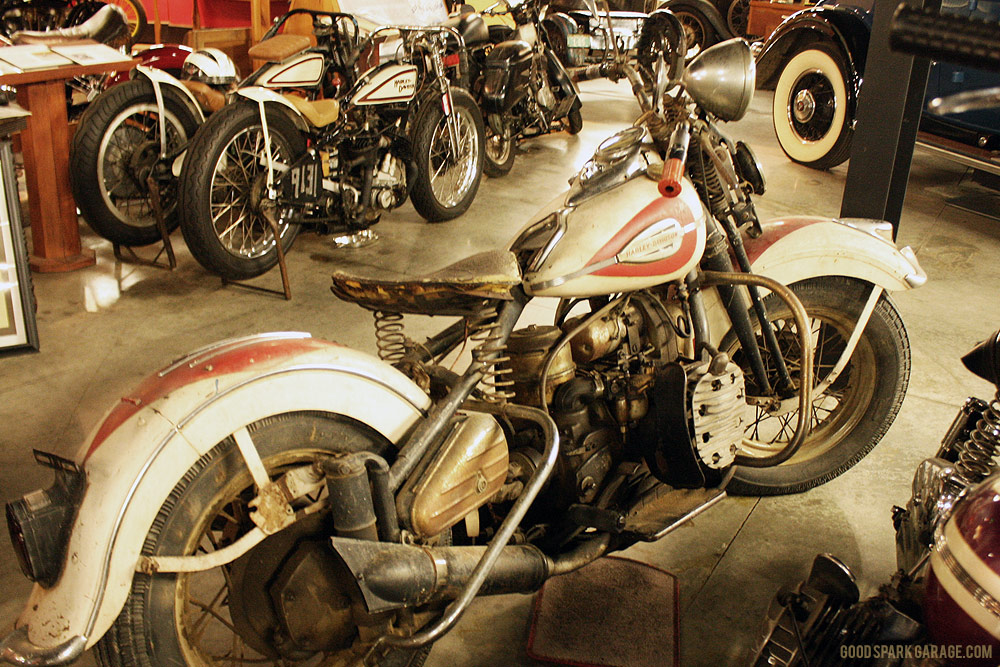 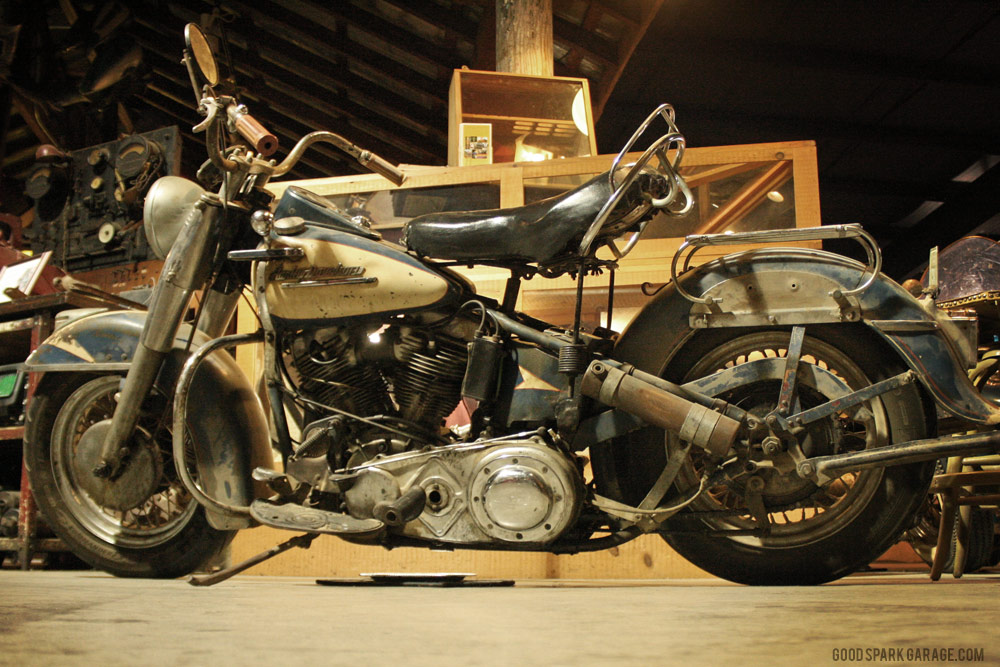 We stood and talked about the uniqueness of early American motorcycles and how they seemed to borrow from farm implements: heavy steel, massive fenders, plow-like handlebars and tractor-like seats and engines. 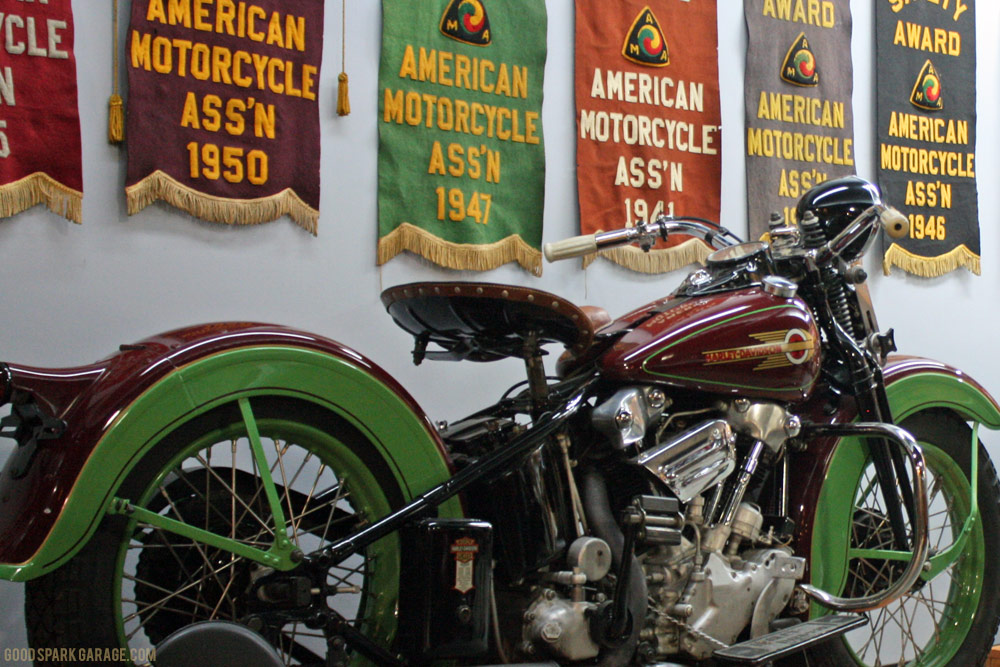 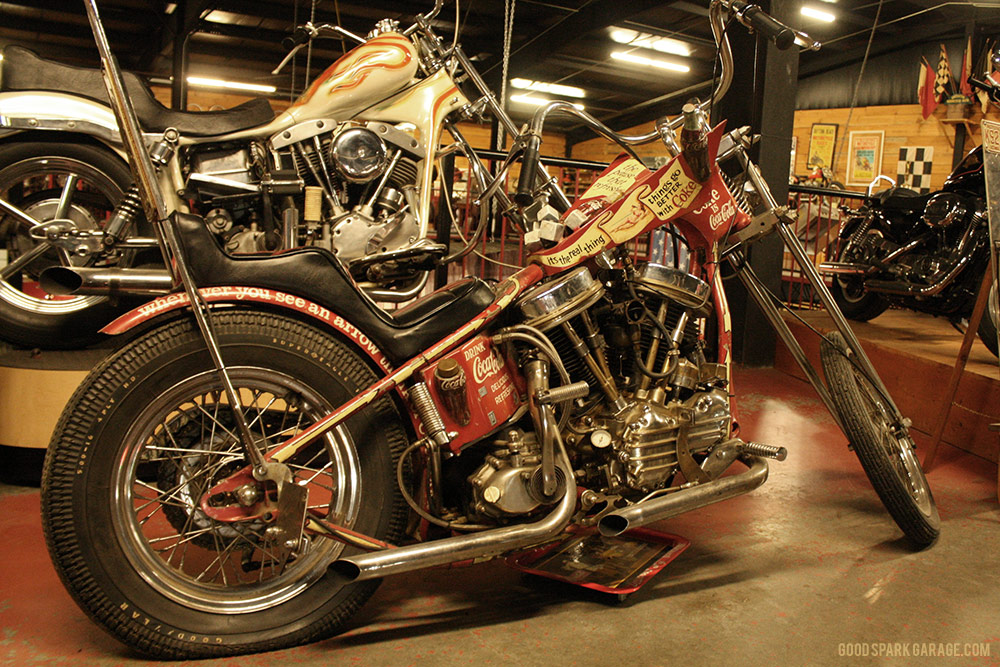 Also in the collection are some pretty funky bikes, like this gaudy Coca-Cola advertising specialty. At Wheels Through Time, you’ll notice silver platters catching oil under the bikes, this one appropriately employs a Coke tray. 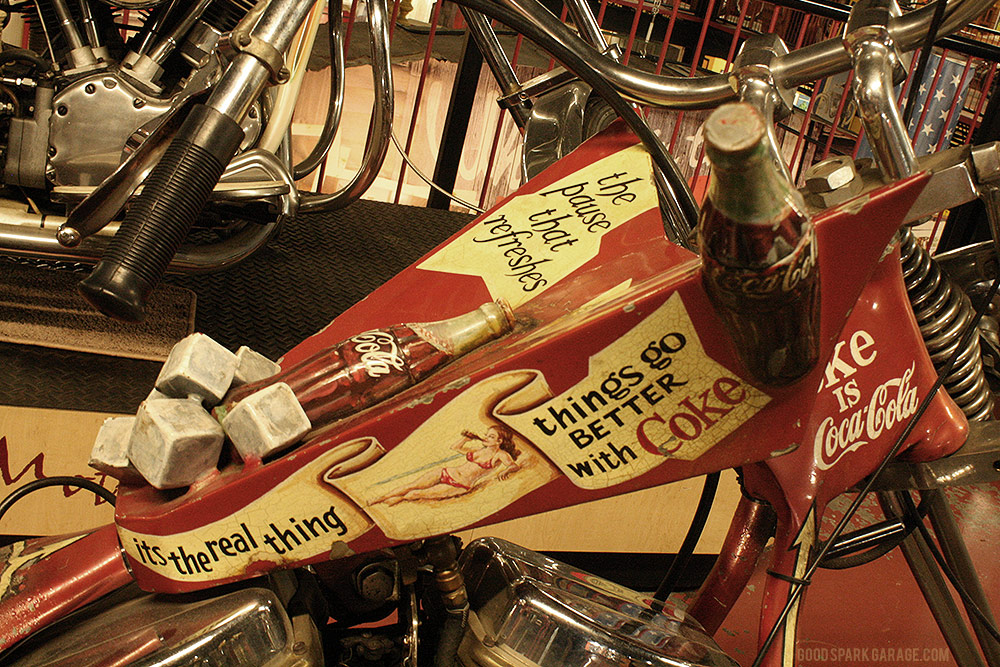 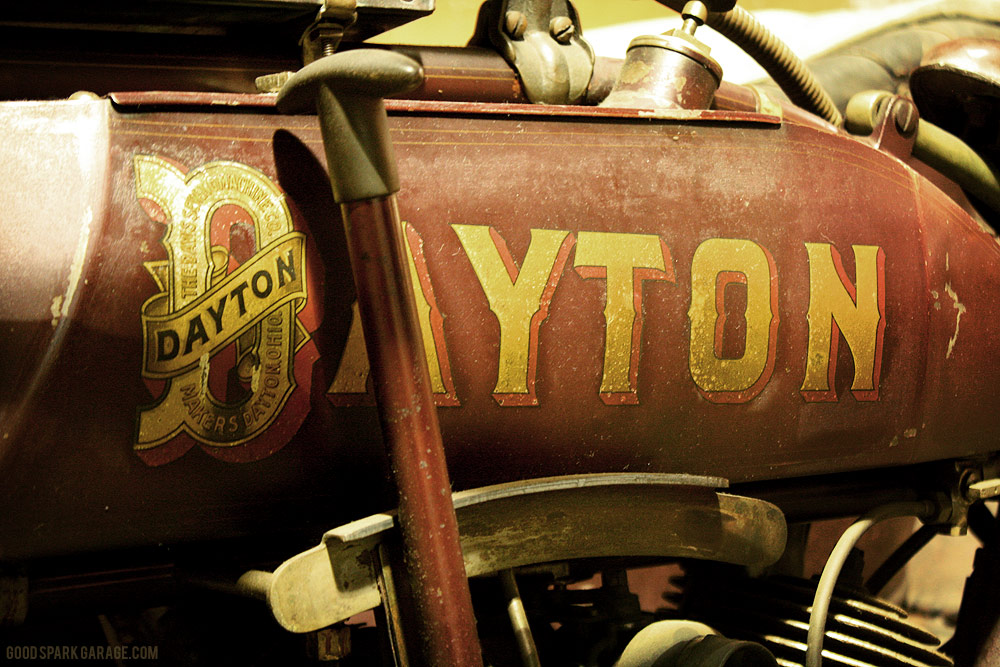 Patina. We can’t get enough of it here at WTT. And it’s quite obvious that Dale has a penchant for distressed paint, aging finishes and worn metal. God bless him for that. 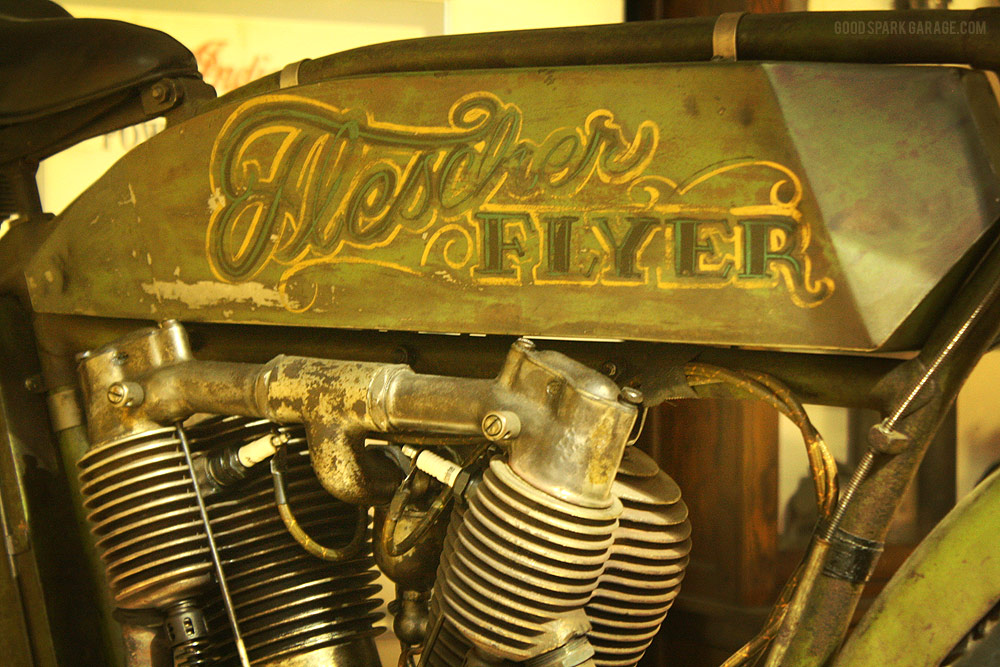 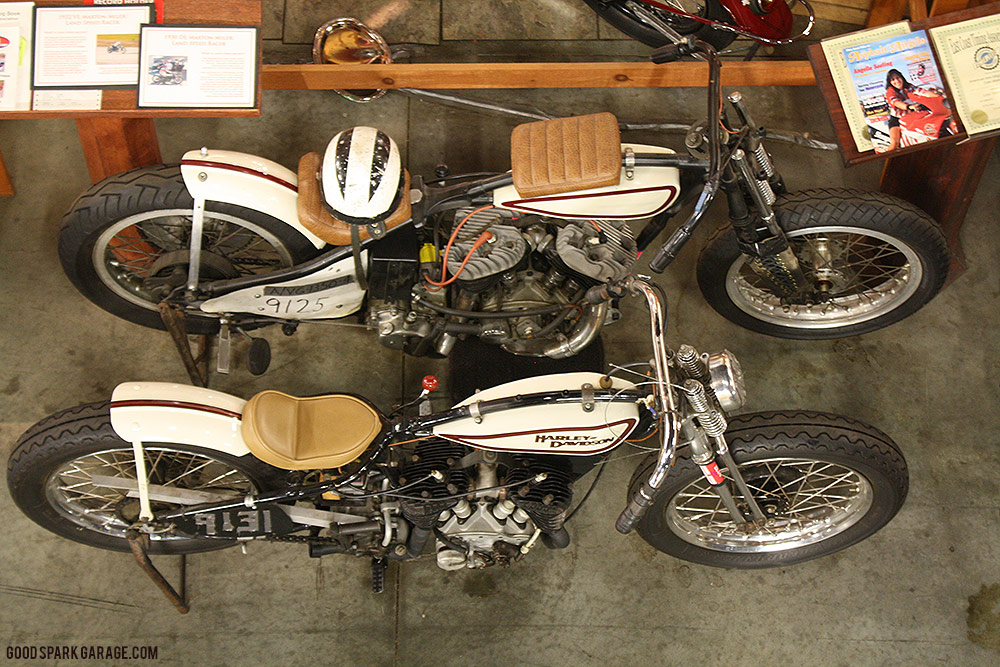 It’s not often you come across a cool, really old American motorcycle. Here, you might find two of ’em parked next to each other. Or three. 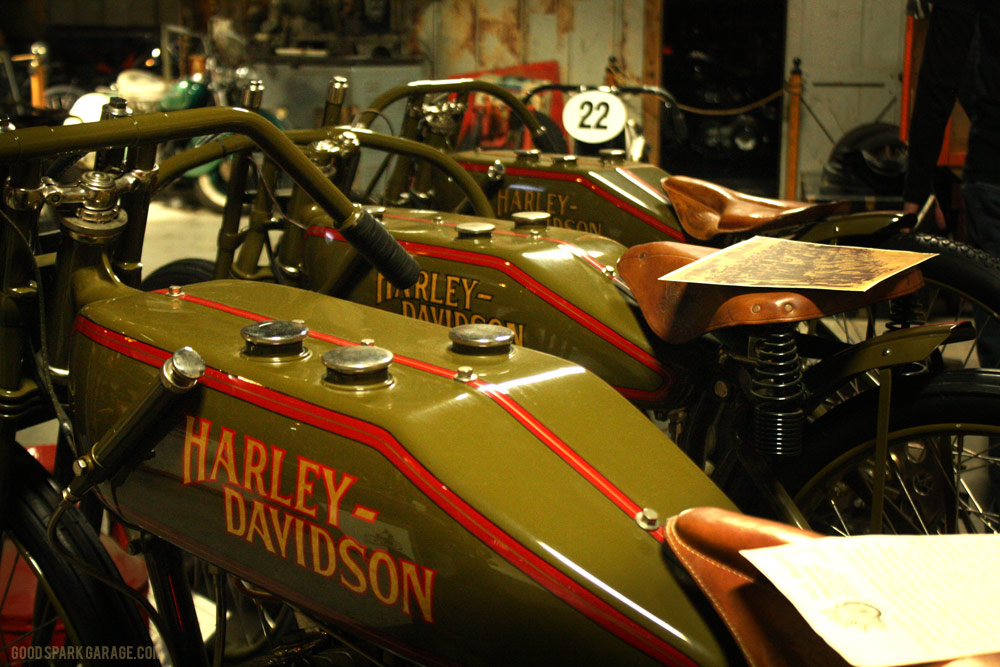 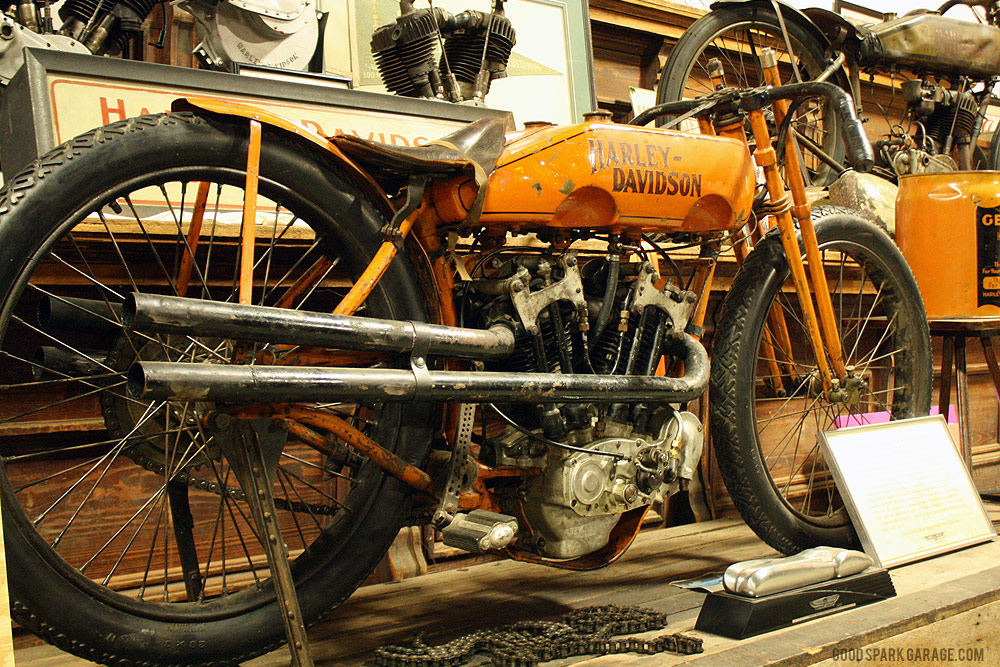 Above: This 1929 Harley-Davidson is one of only 9 or 10 authentic OHV 45s in existence, this being the only board track racer variation of the survivors. 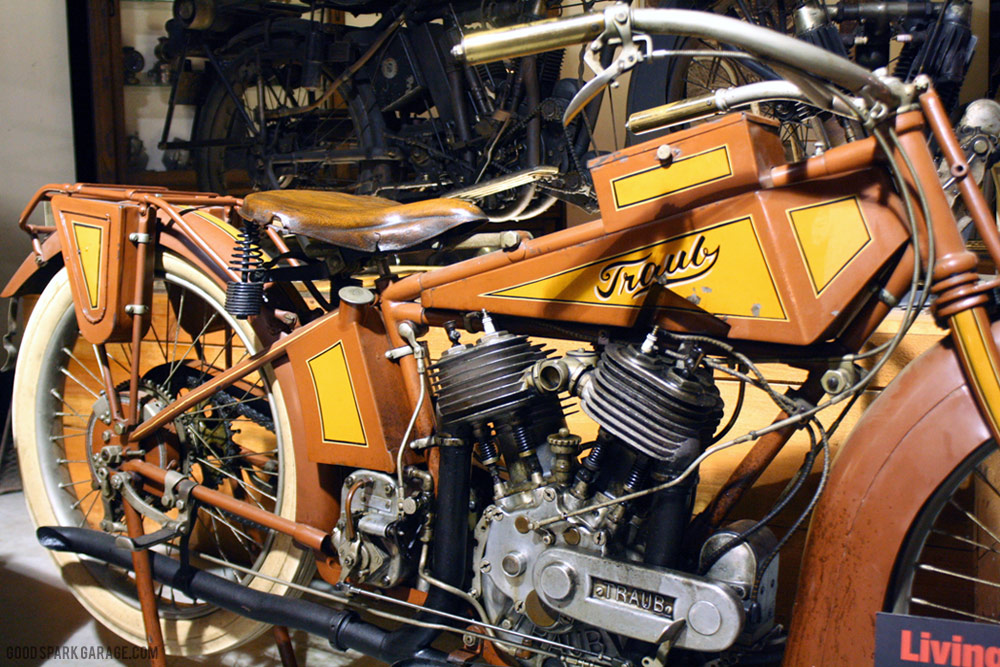 Above: Probably one of the most unique stories in the museum, this circa 1916 Traub is a one-of-a-kind motorcycle. Not only does it have an unknown maker, it was found behind a brick wall in a Chicago home. This bike can be fired up and run 80mph with all its hand-built parts in perfect sync. 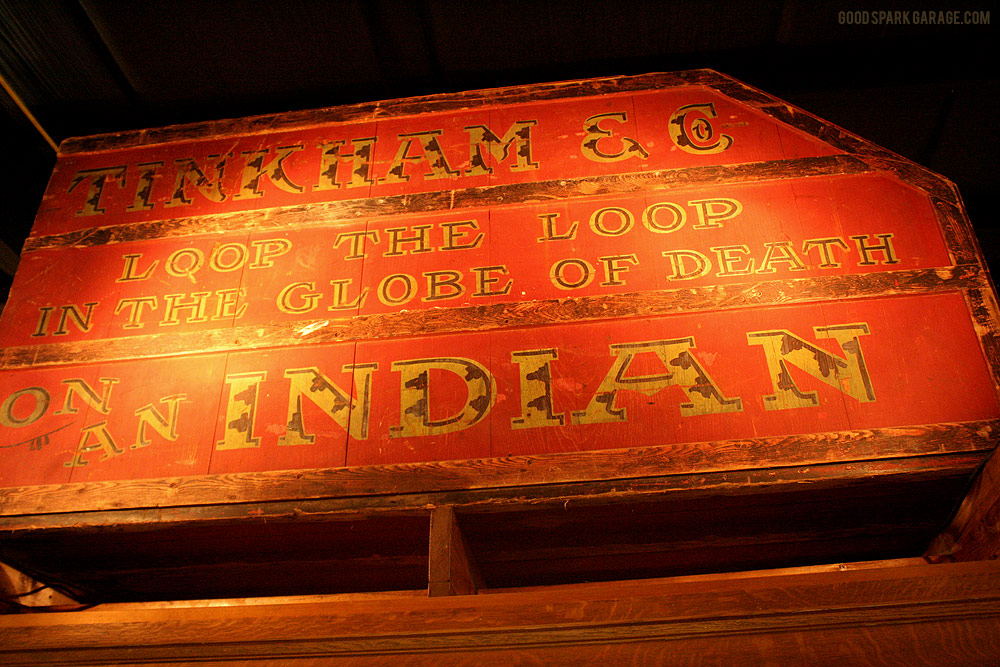 The items hanging on the walls, stacked in corners or hanging from rafters are as interesting as the bikes. Thrill-show signs, old race banners, helmets, jackets, goggles, posters and old number plates are what we’d consider some of the best examples of advertising memorabilia and folk art we’ve seen. 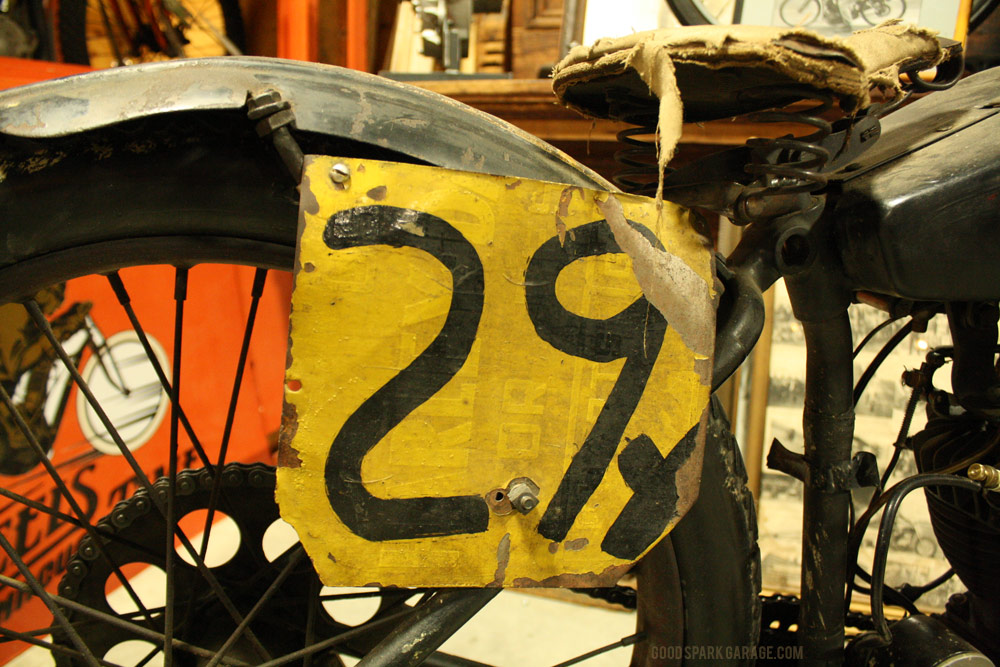 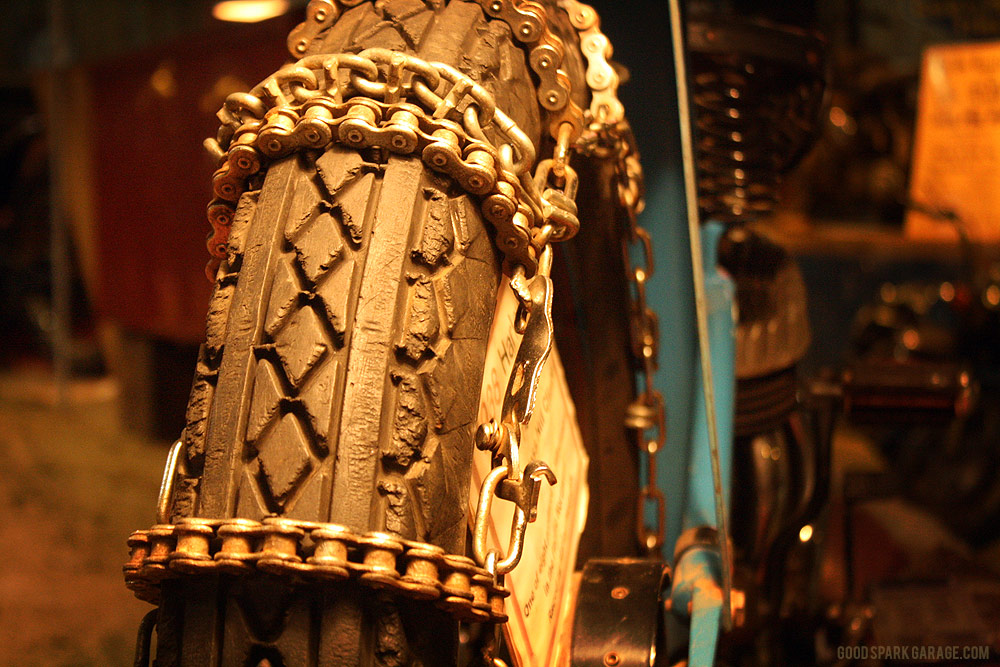 You’ll even be intrigued by the variations of tires and accessories found on these old relics. 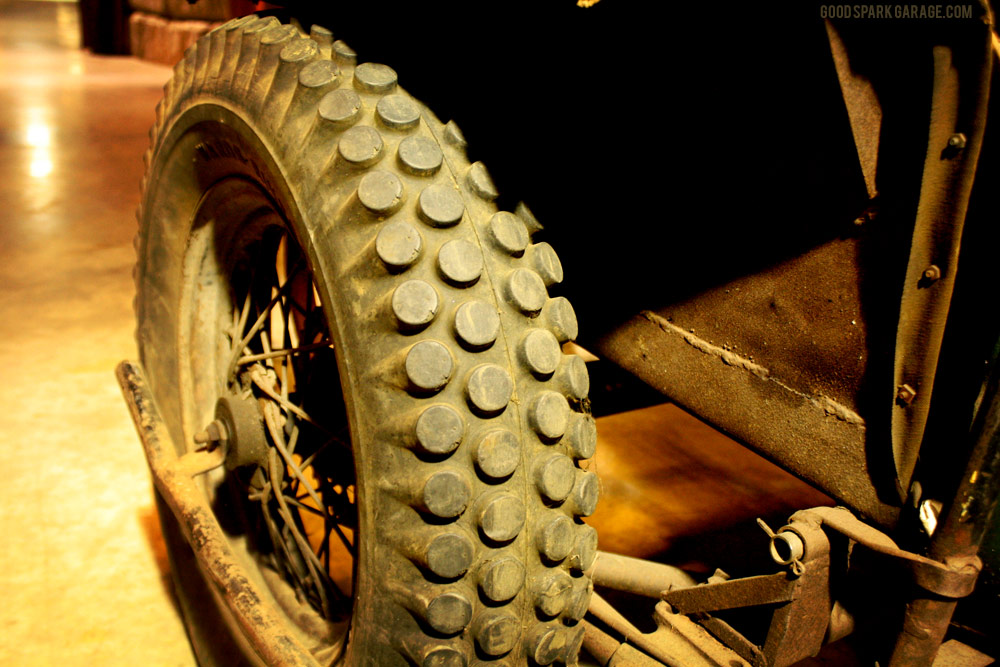 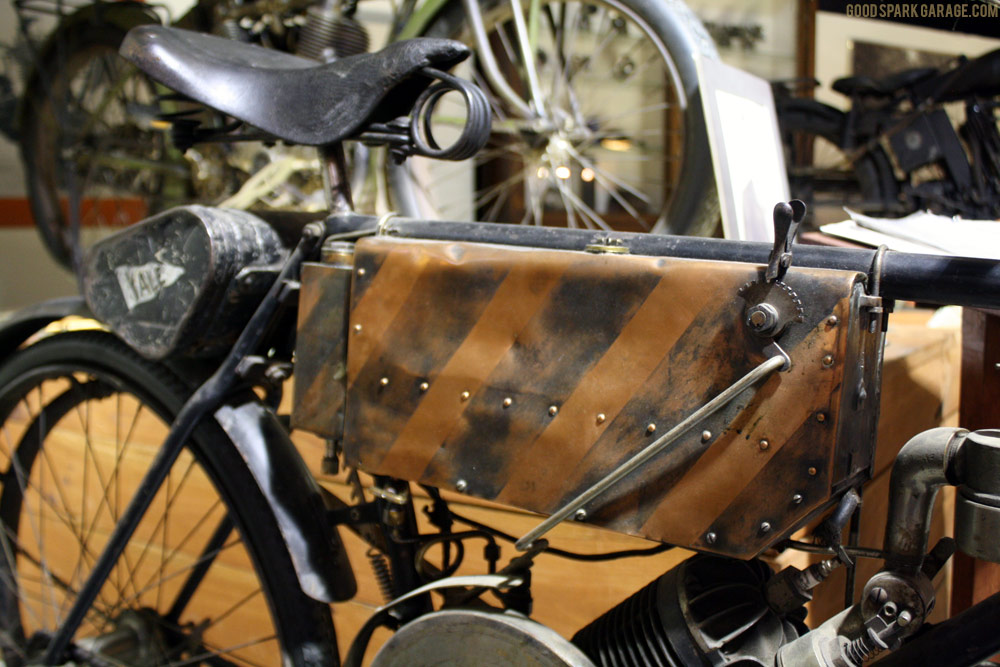 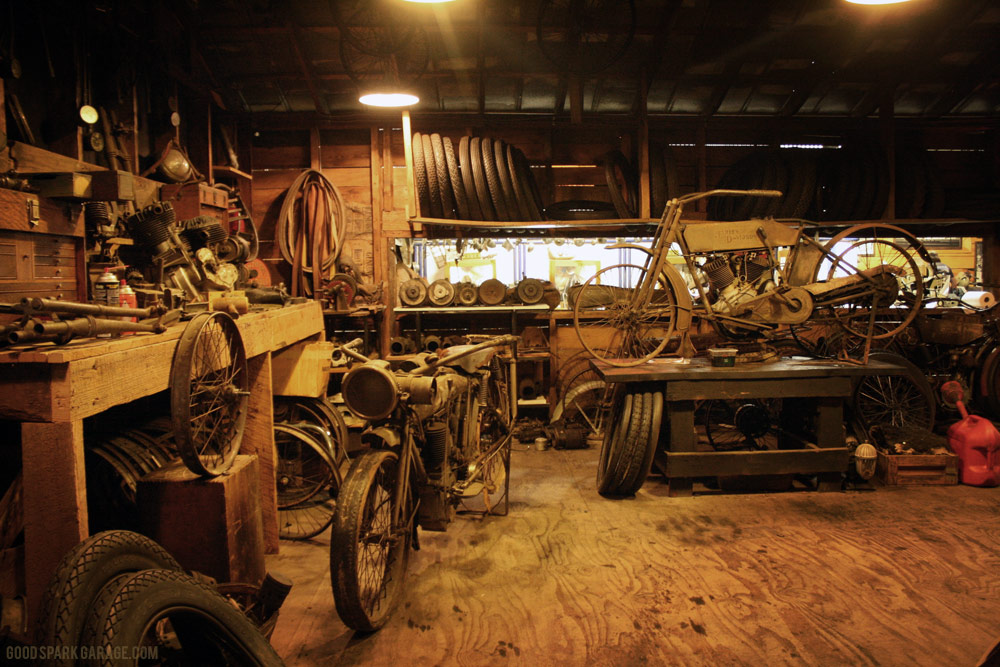 Part of what makes this place a worthwhile trip is how they’ve assembled these “windows” into the world of early motorcycle garages and workshops. They’re the kind of dioramas we dig. 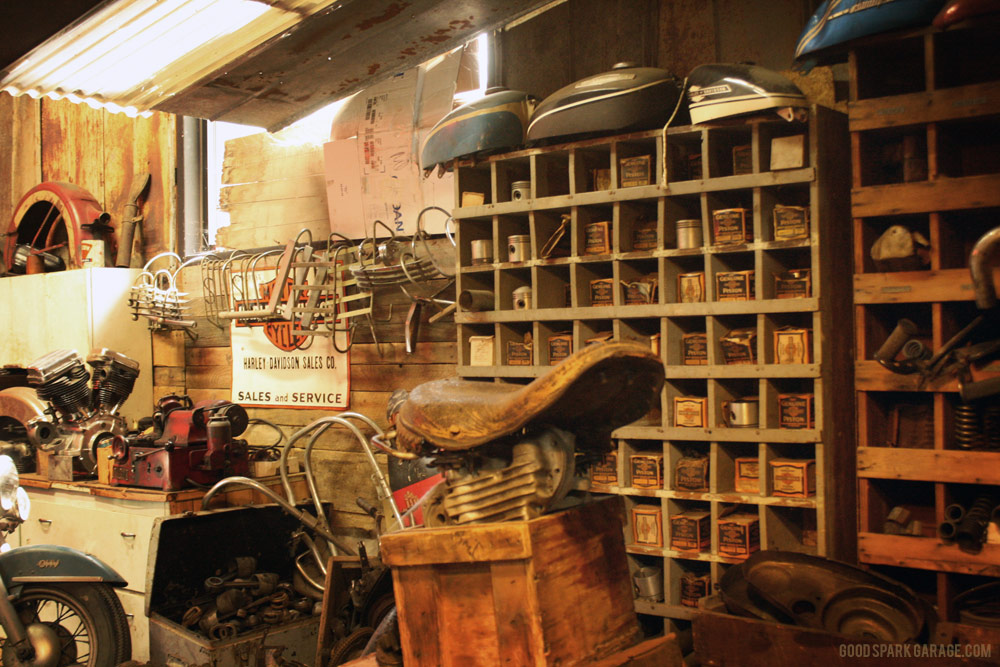 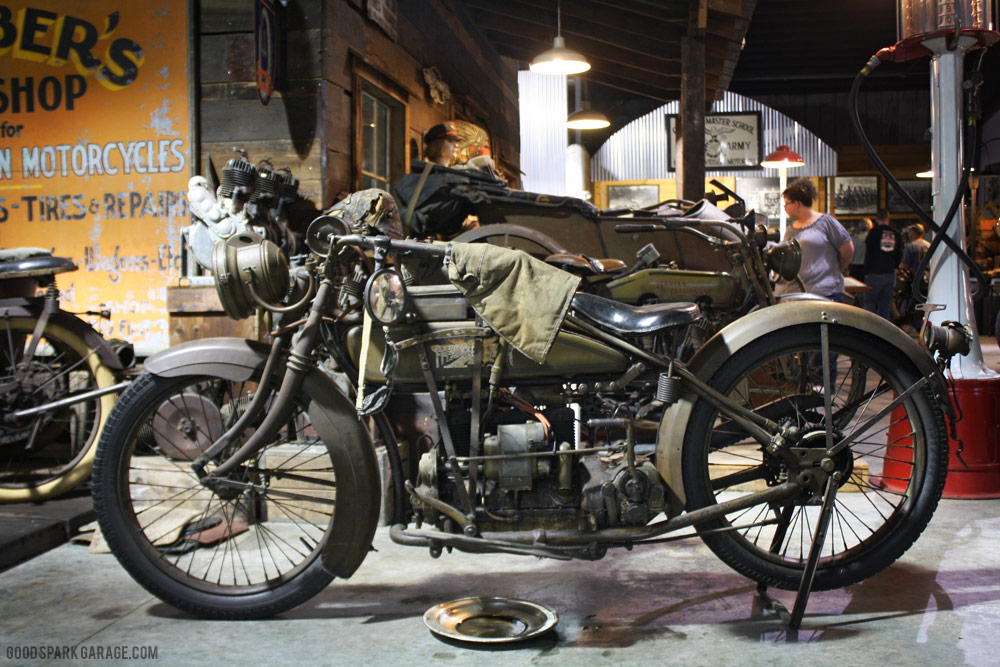 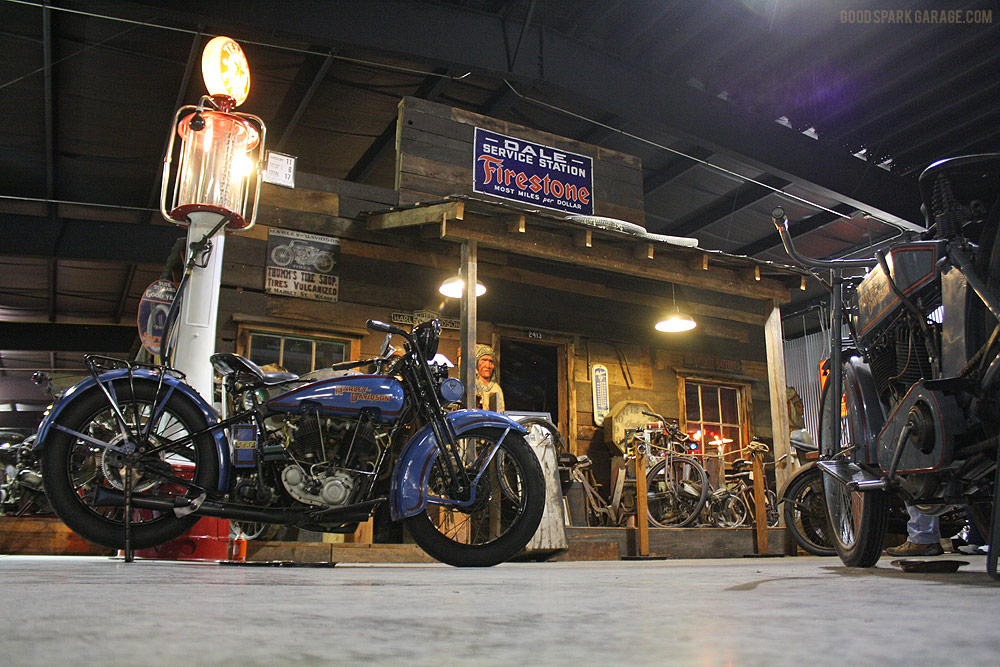 When we visited Wheels Through Time, we were on a 3-day ride that covered the Dragon, the Cherohala Skyway and all the stellar motorcycle roads in their proximity. Of course, we made it a point to include a section of the Blue Ridge Parkway that just so happens to be 4 miles from Dale’s chunk of land in Maggie Valley, North Carolina. If you have even the slightest interest in motorcycles and their origins, buy a ticket to the museum and carve out enough time to absorb the entire collection. It’s great bang for the buck. 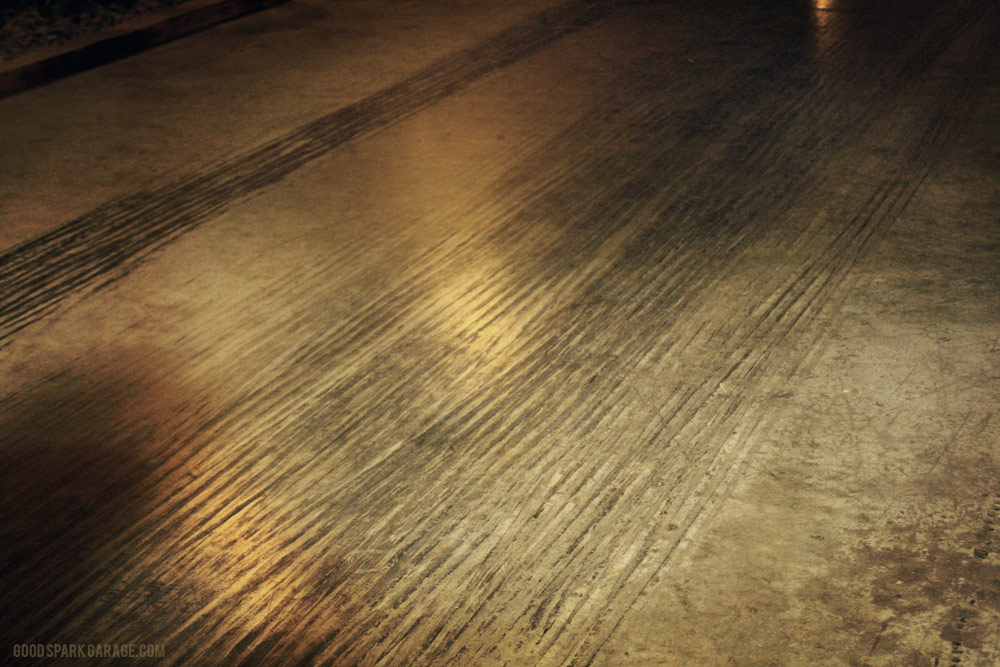 Side note: We unfortunately missed Dale and Matt Walksler (father and son) since they were at Barber Vintage Festival, but we’ll try to make it back someday to watch him light up the tires of an old bike or two and add some fresh rubber to the floors of Wheels Through Time.

Turntables and a Triumph Motorcycle