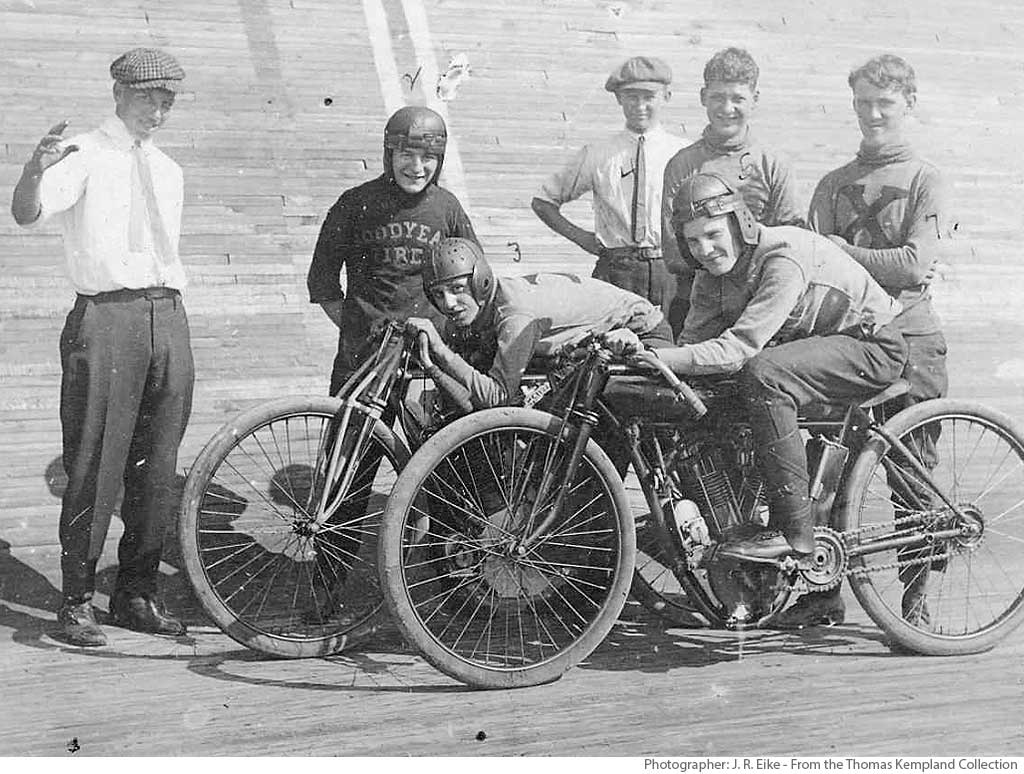 It was all headed to the trash. A sizeable, historic collection of glass plate negatives of early 1900s American life was about to be deleted from existence. But, Thomas Kempland, antiques aficionado and old-stuff guru, gladly accepted ownership of J.R. Eike’s photography and the wooden boxes of incredible St. Louis imagery. Among the images Tom scanned from the negatives is a handful of board track racing motorcycles at the St. Louis Motordrome. Check out these amazing photographs that Mr. Kempland has allowed us to share here.

J.R. Eike (most likely pronounced, eye-keh) had the eye of a journalistic photographer, carefully identifying and documenting daily life and urban progress. His family owned a bicycle shop on Montana Street, so we’re guessing Eike’s affinity for two-wheel travel inspired him to capture these brilliant pics of board track racers. 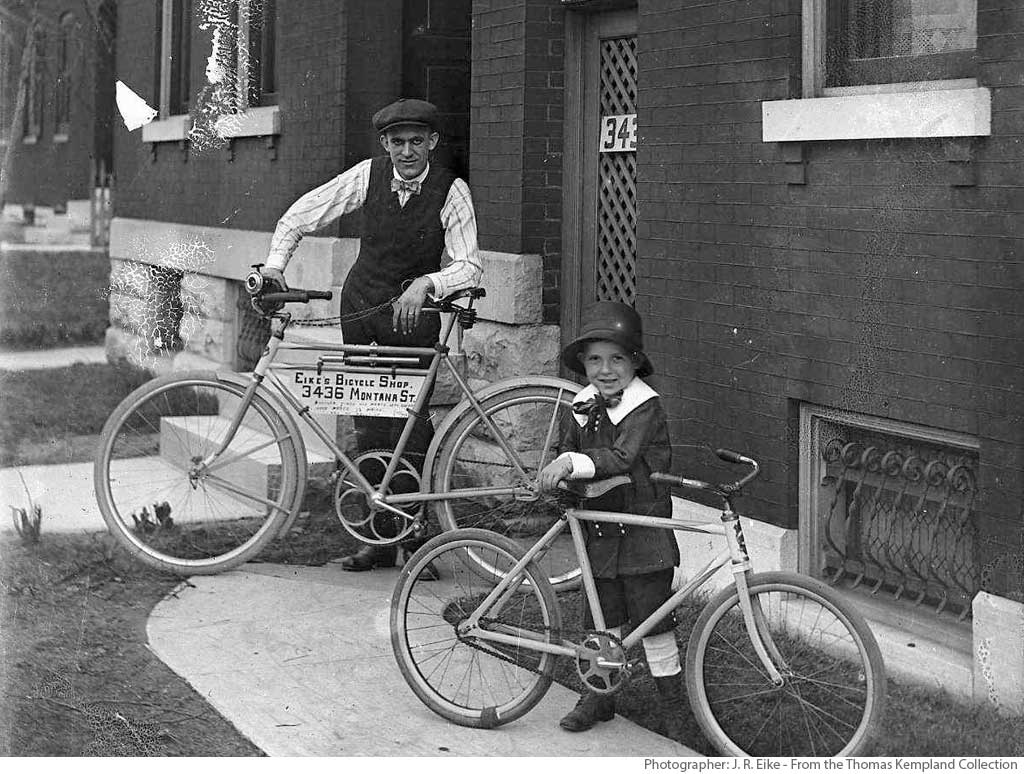 During this era of bicycles morphing into motorcycles, race promoters that relocated to America from Europe brought the concept of velodromes with them. Replace velo, which means bicycle in French, with “motor” and you can make the connection. It was a big deal. Tens of thousands of spectators would show up to watch fast and extremely dangerous racing at what would soon be nicknamed “murderdromes” (at a race in Atlantic City, several racers and spectators died in one crash). 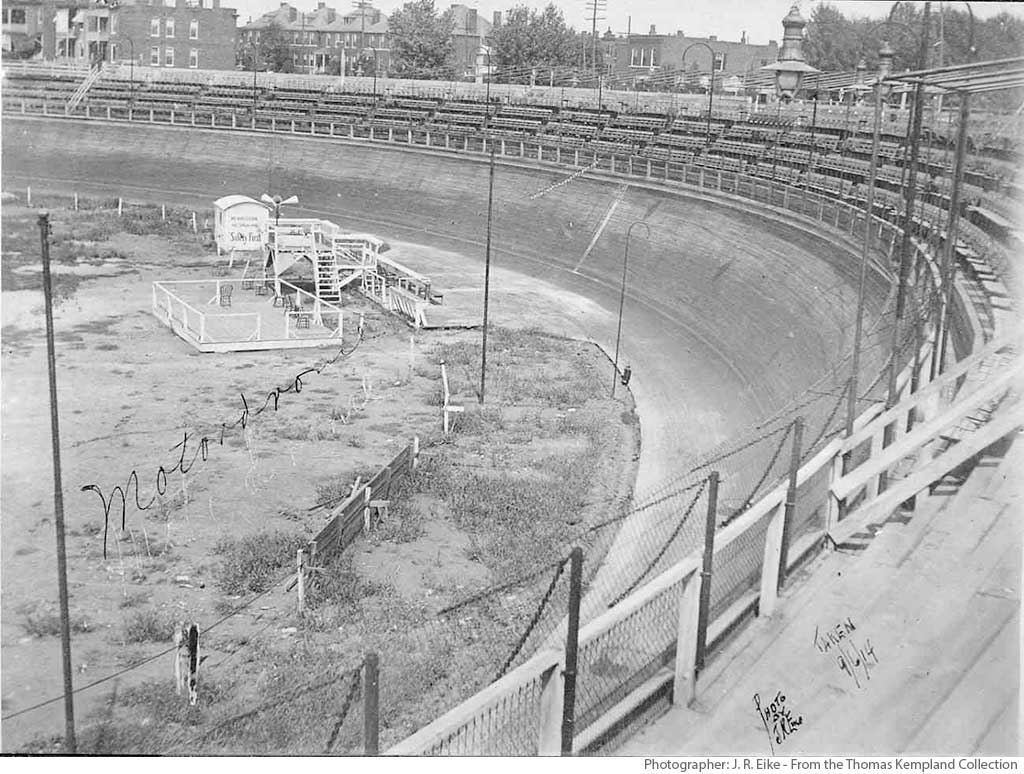 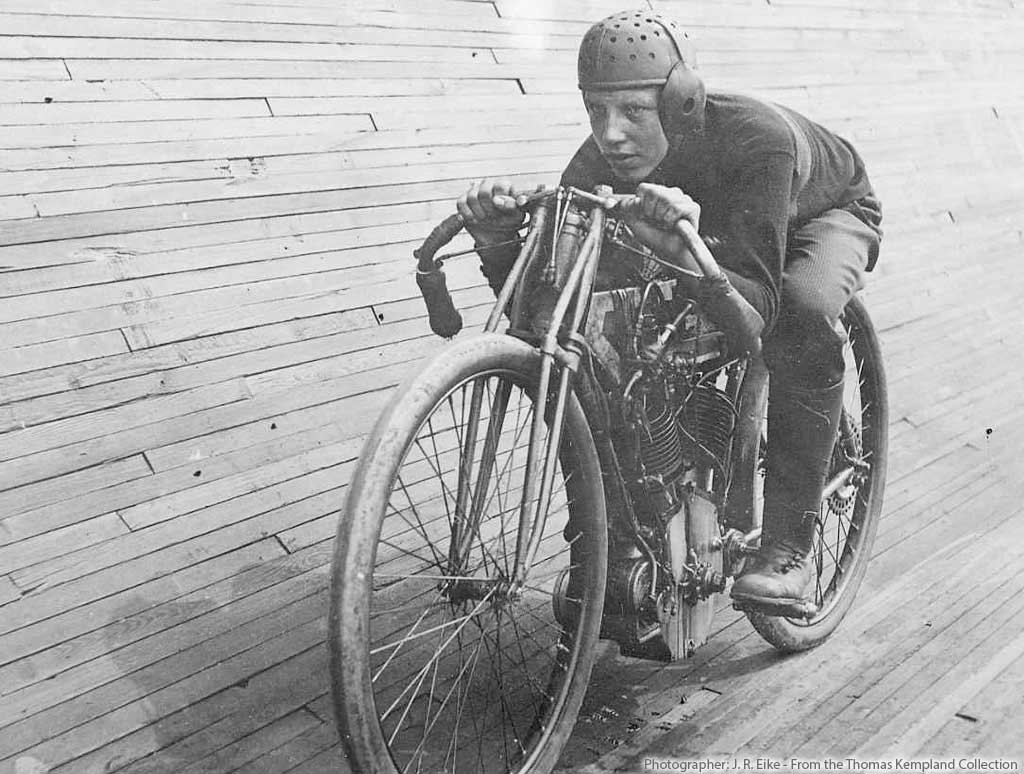 Circa 1914, the St. Louis Motordrome was a circular quarter-mile track located in what was then an amusement park called Priester’s Park (see pic below). It’s insane really; wooden guardrails and catch fences sat atop very steep banking, waiting to collect (and abruptly stop) racers that rode astray. The first motordrome in the USA opened in Los Angeles in 1910, where racers approached 100mph on dusty 2×4 lumber until a fire forced its permanent closure just three years later. 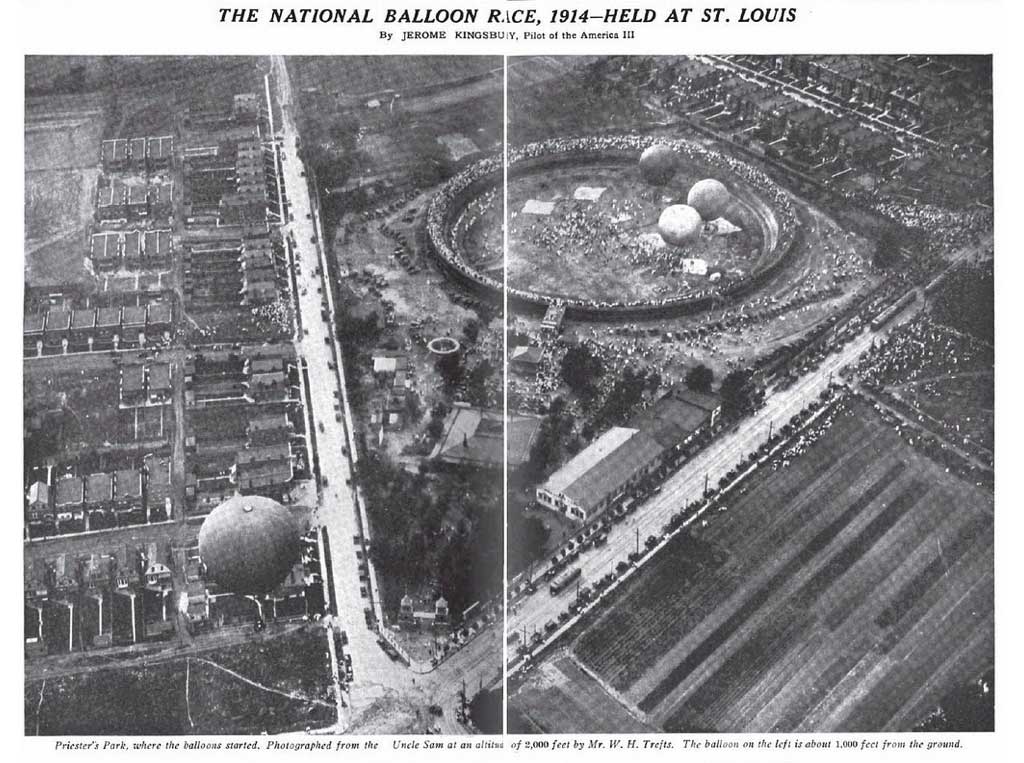 By 1929, a couple dozen board tracks had been built in the U.S., but soon thereafter this form of racing dried up – a victim to the high risks and burdensome maintenance. Not a trace of the St. Louis Motordrome exists today, but, man, what a thrill and shot-in-the-arm these kinds of venues were to motorcycling. Playing a part in the exploding growth of motorcycle manufacturing and racing, this motordrome provided industrial Midwestern civilians an arena for never-before seen speeds and daredevilling mayhem. 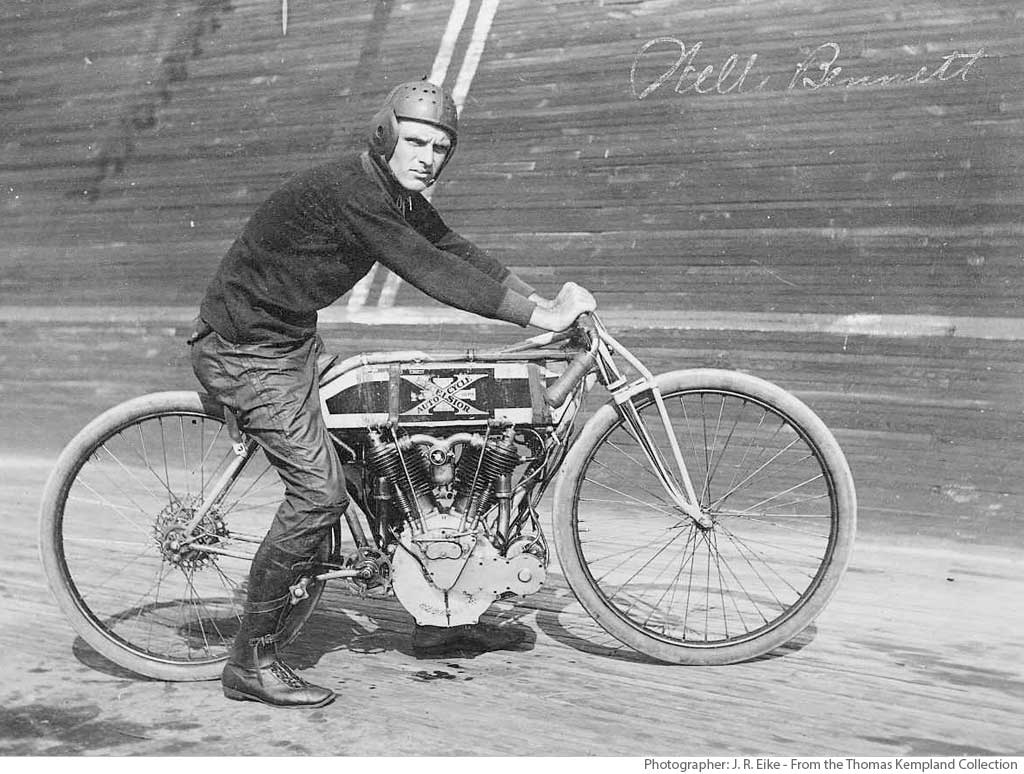 Already an accomplished dirt track racer, Wells Bennett (pictured above and below) won his first board track race in 1912 at a Denver motordrome. He had zero experience on the boards and credited luck as the reason he didn’t crash, saying, “I saw many a good boy killed in that same way.” In 1914, he signed with Excelsior, as seen in these photos. 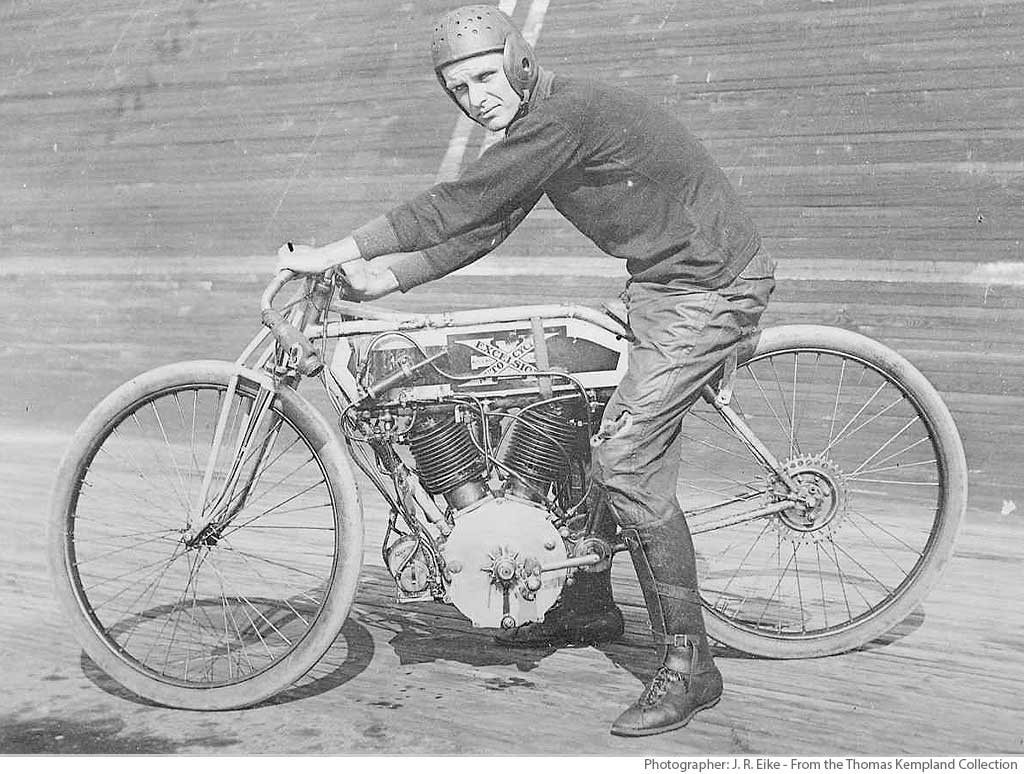 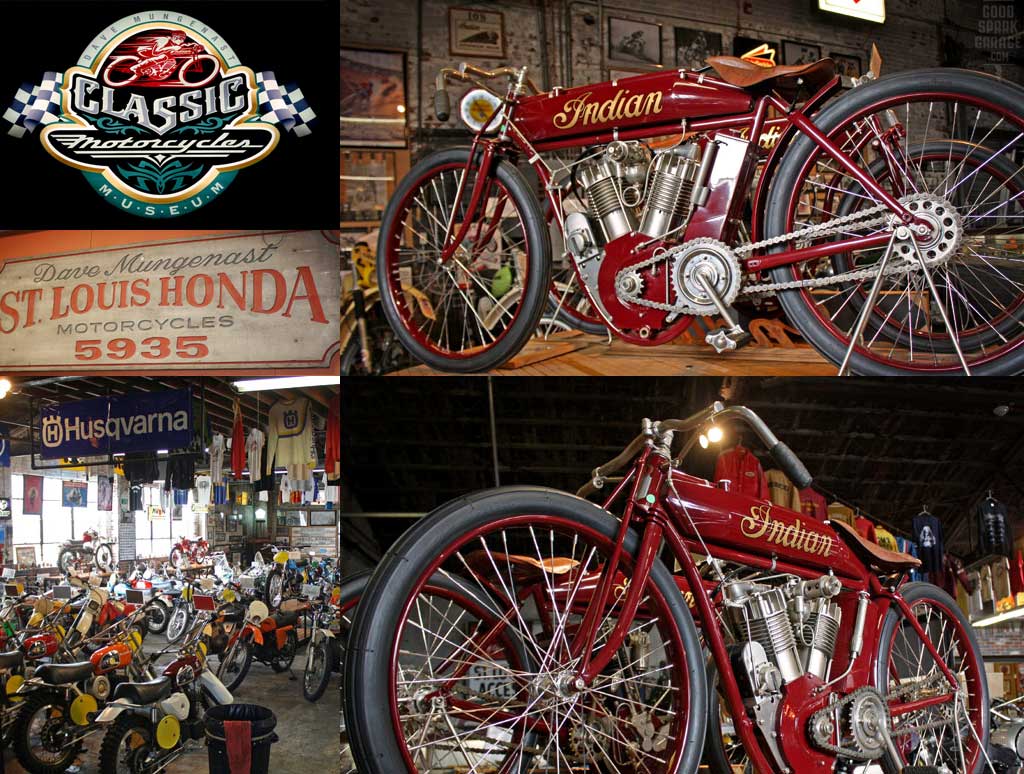 As featured in a previous Good Spark Garage article, we stopped by the Dave Mungenast Classic Motorcycles Museum in St. Louis and saw two amazing Indian motorcycles that raced the boards during the sport’s heyday. Pictured near the bikes was a picture of the St. Louis Motordrome with the stands filled; we zoomed in to one of our photographs to show you (below). 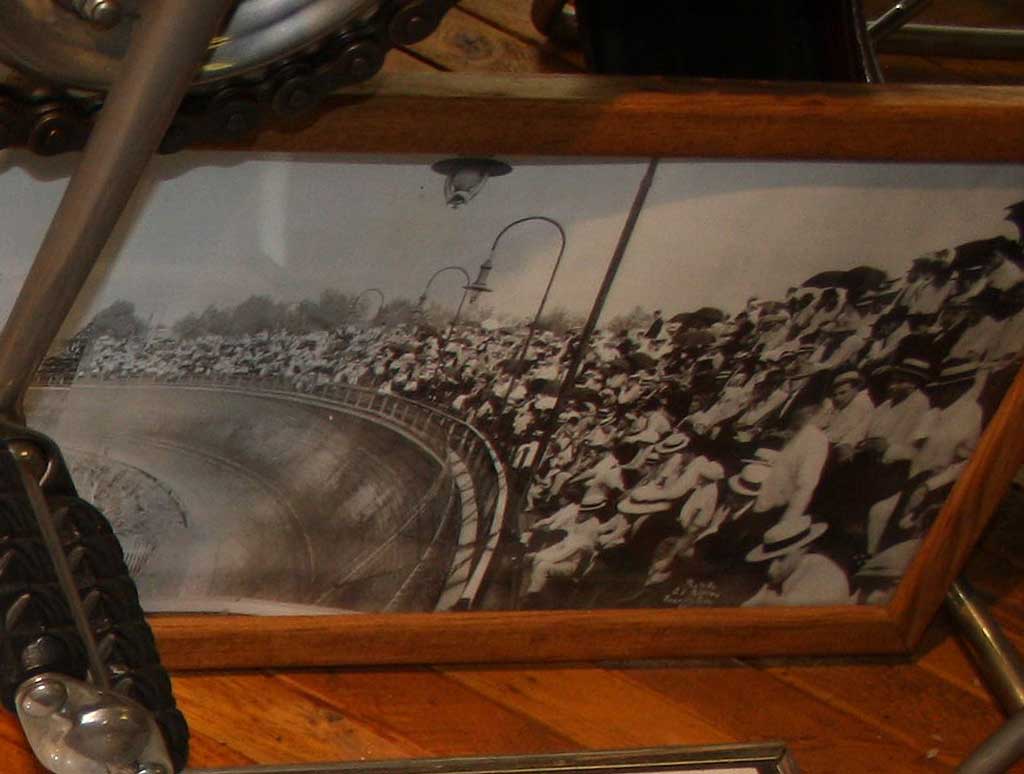 You can view many of Eike’s incredible images from Thomas Kempland’s collection here. And you really should allow plenty of time to click through the wonderfully preserved slices of life in St. Louis, Missouri, just before the USA entered World War I. We’re not sure why the Eike family didn’t want to save the plates, but we’re glad Tom decided to keep, scan and post them for the world to see.

If you dig this feature, check out our other Good Spark articles and share ’em with your friends. You can also join us on Twitter and Facebook for more moto-minded conversation. Thanks for tuning in!

Restaurants are often a destination when looking for an excuse to ride. Chris suggested the Heidelberg…