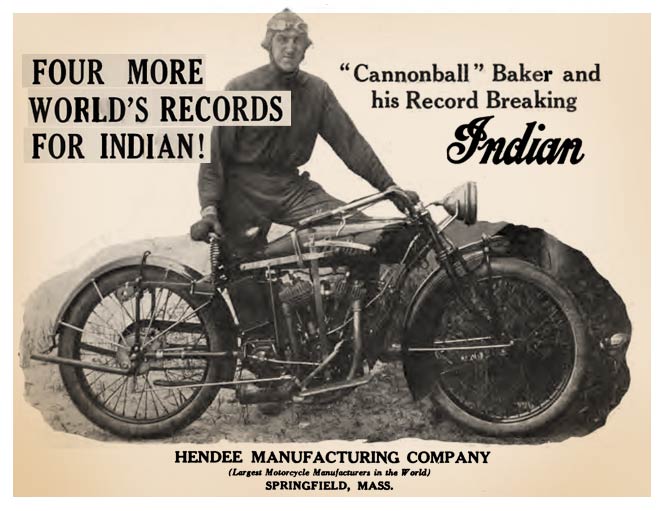 By 1917, Erwin Baker had been racing motorcycles and setting records for 13 years. He was an Indian rider from Indianapolis with a valuable reputation. After a quick coast-to-coast ride, he became nationally known by the speedy and marketing-appropriate nickname, “Cannonball.” Long before racing vehicles were covered in corporate sponsorship, Baker earned the support of some of the biggest names in automotive manufacturing. The story of his record-breaking ride at the Cincinnati Speedway board track in 1917 is the kind of stuff his legend is built upon. It’s also a great example of why the Cannonball moniker added a powerfully positive association to motorcycle products of the early 1900s. Read on…

The dust had recently settled on the 2-mile board track just north of Cincinnati, Ohio. There, not even a month before, 65,000 people watched Louis Chevrolet win the Sharonville Sweepstakes in a Frontenac race car. The field was stacked since the nearby Indianapolis 500 had been cancelled due to wartime efforts. On June 26th, 1917, Cannonball Baker had the 70ft-wide straightaways to himself. The goal was to ride as many miles as possible on his 1000cc Indian Powerplus V-twin in a 24-hour window of time. The guy that held the 500-mile, 1000-mile, 12-hour and 24-hour records was the “Stalwart Californian,” Alan T. Bedell, who rode for Henderson. All four of these records were broken by Baker, but not without challenges and potential pitfalls. 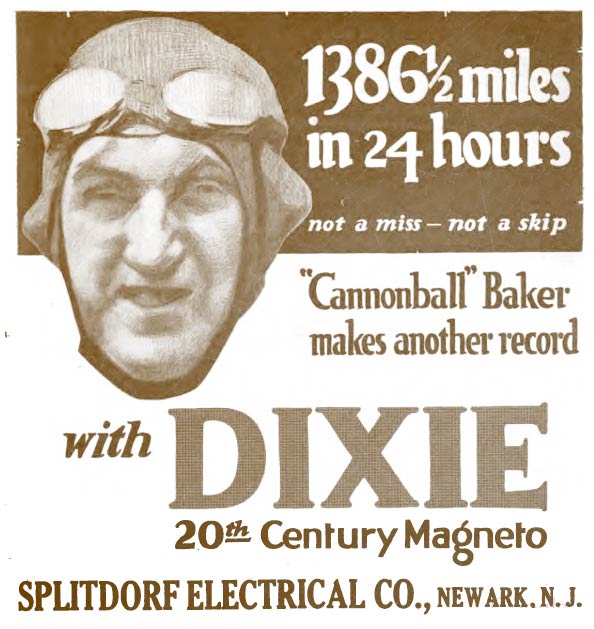 Within the last four months, his 24-hour and transcontinental records had been beaten. The newspapers reported, “Baker’s reputation at stake” as he began his mission to alleviate a “sting he could not long endure.” He also knew he’d need the best equipment and full support of his sponsors. In return, if he won, he’d provide them with advertising bragging rights in an industry that was exploding with competition.

No chances would be taken when logging the times and speeds at Cincinnati Speedway; four scorers and four timers were hired among a sprinkling of other officials. At the end of the trial, his engine would even be torn down in the presence of a referee and “six disinterested parties” with an affidavit to substantiate the findings (that it was indeed stock).

All this preparation sounds proper and smart. Baker knew the value of playing by the rules and having many sets of eyes on the accomplishment. Others that came before and after faced scrutiny and skepticism, especially on the hard-to-monitor transcontinental rides. But, what many folks don’t know is that Erwin G. Baker started a career in vaudeville before racing. Yep, he wasn’t your average gearhead or stoic racer; this guy knew how to creatively and confidently present his feats to the public. It’s often the colorful personalities that draw in sponsorships, a fact that wasn’t lost on Baker. Of course, his ability to become “factory sponsored” had to be supplemented with tenacity and perseverance. 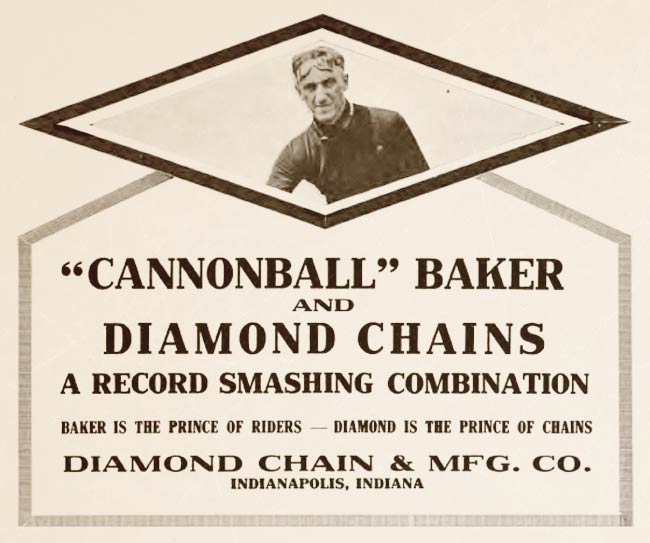 During the record-breaking attempt in Cincy, after the 900th mile, a heavy rain caused concern as it fell on the dirty wooden surface. In Baker’s mind, he could probably already envision the headlines that would soon be printed in Motorcycle and Bicycle Illustrated: “Rain Interferes with Ride…Dependable Equipment Played a Big Part.” Bank. He or his tire reps also made sure the press knew that the same tires used in the 1300+ miles had also been tested for over 500 miles beforehand. Another example of marketing gold, the Diamond Chain, made right in his hometown of Indianapolis “did not even need an adjustment during the twenty-four hours.” That’ll sell some chains. One of my favorite bits of descriptive journalism keyed in on the Troxel-Maslen saddle that was mounted on the bike. Cannonball noted how the “velvety action of the springs” was like first aid to the vibration-inducing track and that the “low saddle position afforded him a grandpa-chair-like satisfaction.”

Baker had quite a team, too. Made up of several Indian “agents” from the Cincinnati area, they orchestrated efficient pit stops that included gas-and-oil refills every 100 miles and occasional valve and spring inspections. As Baker loosened up his muscles during stops, not even 5 minutes would pass before the bike was ready to press on. To the delight of the bike’s maker, Hendee Manufacturing Company, reports said that the Indian’s motor ran “with the same humming smoothness at the finish as it did at the start.” His team would communicate via slates held up alongside the track. Only one hiccup thought to relate to the motor ended up being a problem with the gas line. Mechanics removed the strainer and off he went.

With a 24-hour run, nightfall is bound to factor in to the challenge. Usually, the moon would’ve cast a bit of light on the track, but it was particularly overcast that night. Baker used four red lanterns, one placed in each turn, to guide him along. To add even more spice to the story of Baker’s ride, nature struck again when the path of his Indian (traveling at approx 60mph) crossed with an errant rabbit. Cannonball avoided catastrophe, but suffered a jarring blow to his right hand, which was left severely swollen for the next 600 miles.

After reading of his accomplishments, how he landed sponsorships, how he inspired movies and generated headlines, I imagined him sitting back as an older gent proud of his ability to make the realm of racing his “stage.” Though he left small vaudeville theaters for racing, he remained an entertainer for sure, performing for a much bigger worldwide audience. For that, I stand and applaud. Bravo, Baker!

A Ride to Mercantile 37

When the big interstates absorbed the bulk of motorists, commerce along the old main roads dried…