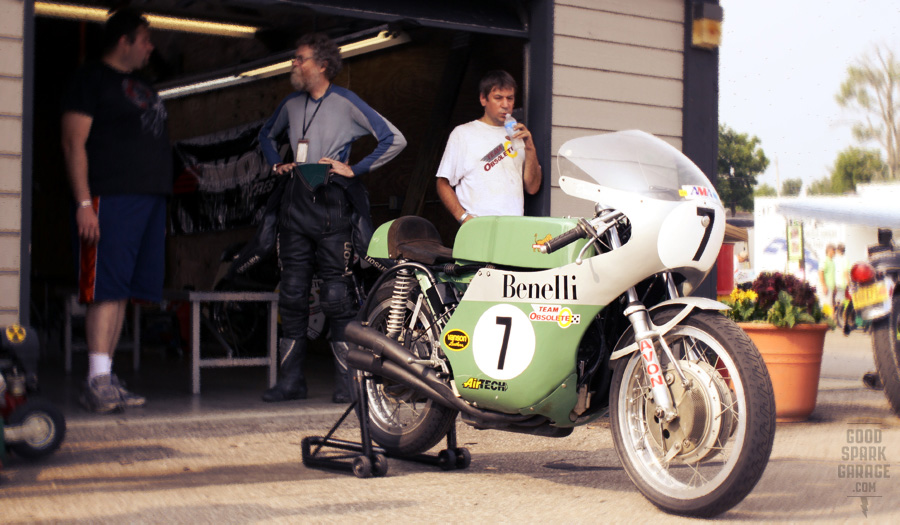 Walking through the pits and discovering Dave Roper‘s garage was fascinating. At first glance, Dave’s physical appearance is that of a front-porch whittler, yet he’s leathered-up like a motorcycle road racing hero. While we’re unsure of his mountain-man skills, his past and present involvement in motorcycle racing indeed proves his status as a legend.

During AMA Vintage Motorcycle Days at Mid-Ohio Sports Car Course, we wound our way through the paddock and ended up outside Team Obsolete‘s garage. Dave is their rider; they go waaaay back. The team had the well-deserved primo spot next to the staging area. Sitting at the mouth of the garage was a 1969 Benelli 24-valve, 350 four, perched upright on its race stand. A crew member told us simply, “it does really well around thirteen-five,” though it could reach 16,000rpm. The tech specs were impressive, fer sure, but we didn’t need to inspect any further than its cool cowling to be enamored with this bike (there’s something charming about those big white ellipses behind a simple black number). 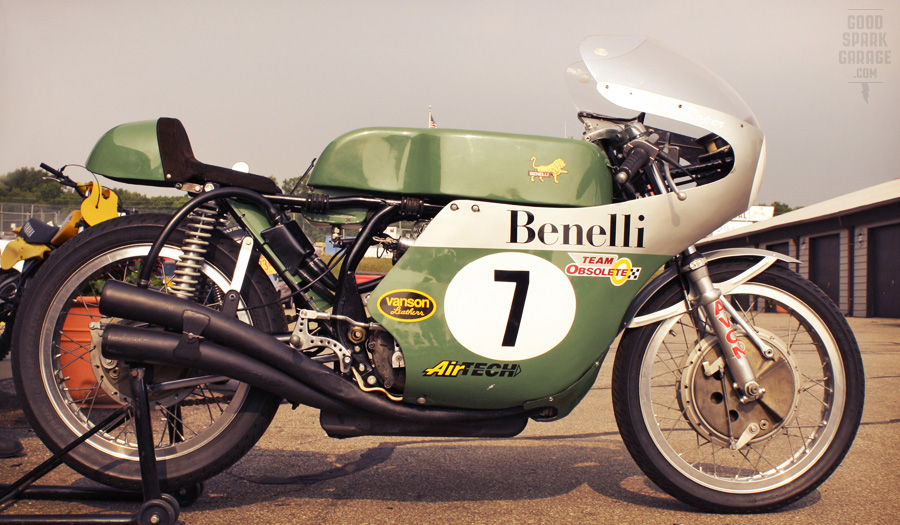 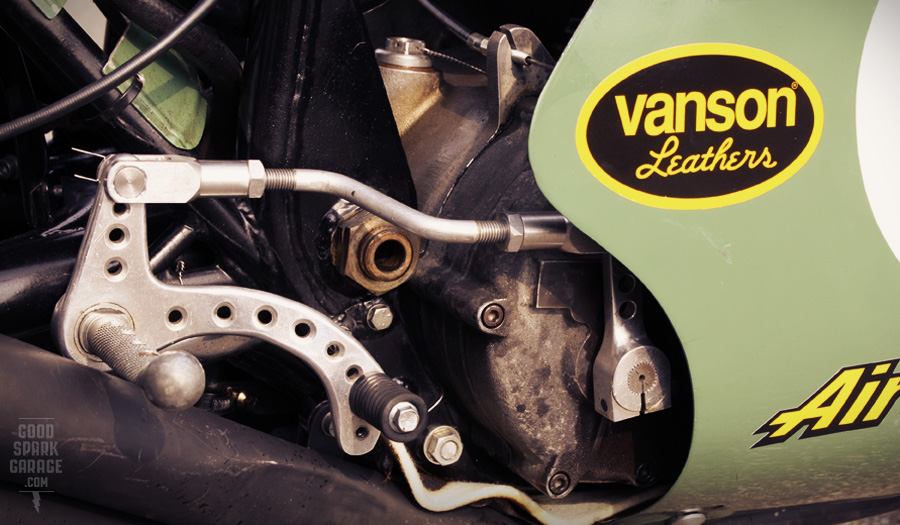 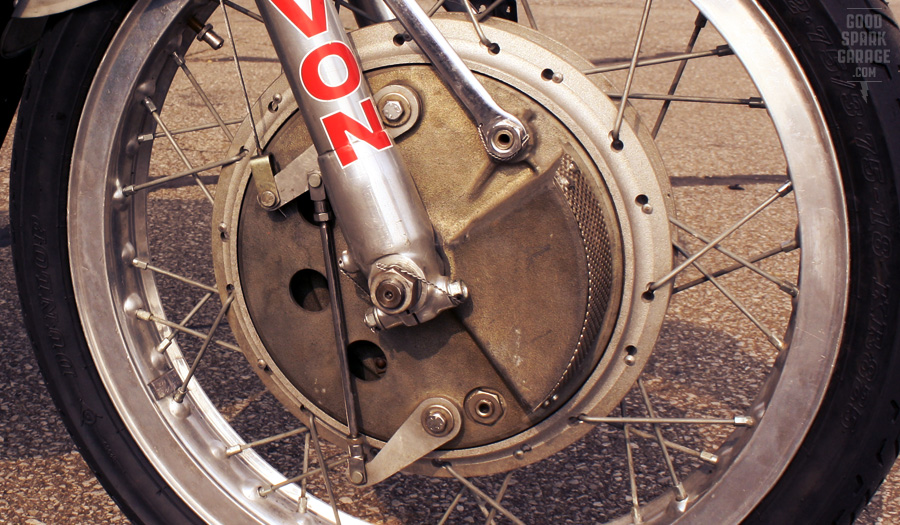 Dave walked in and out of the garage talking to the crew, making adjustments, and tipping his hand up to say hello to the smiling onlookers, who were free to stroll right up to him.

We’ve never quite understood the obsessive zeal that some sports fans have for stick-and-ball celebrities, but knowing that this guy is the only American to win an Isle of Man TT in its 104-year history (who, during one race, caromed off the banks of the island course so hard it dislocated his hip), well, we admit wanting to inch a little closer to the garage and say fan-like things such as, “I mean, that’s Dave (pause) Roper…standing right (pause) there.” 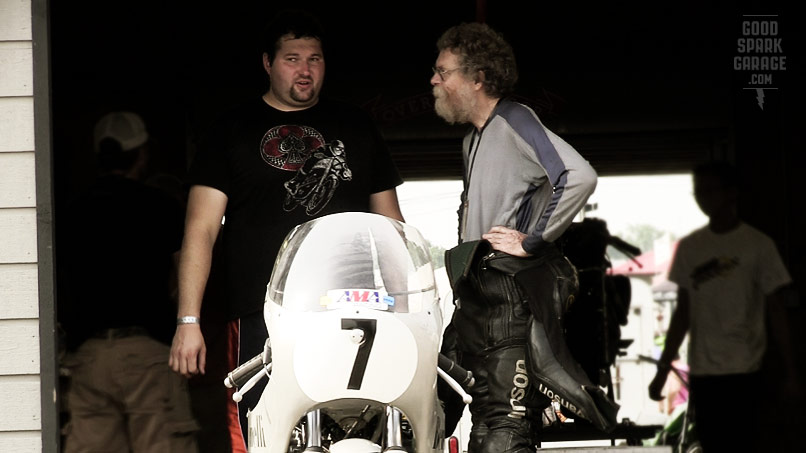 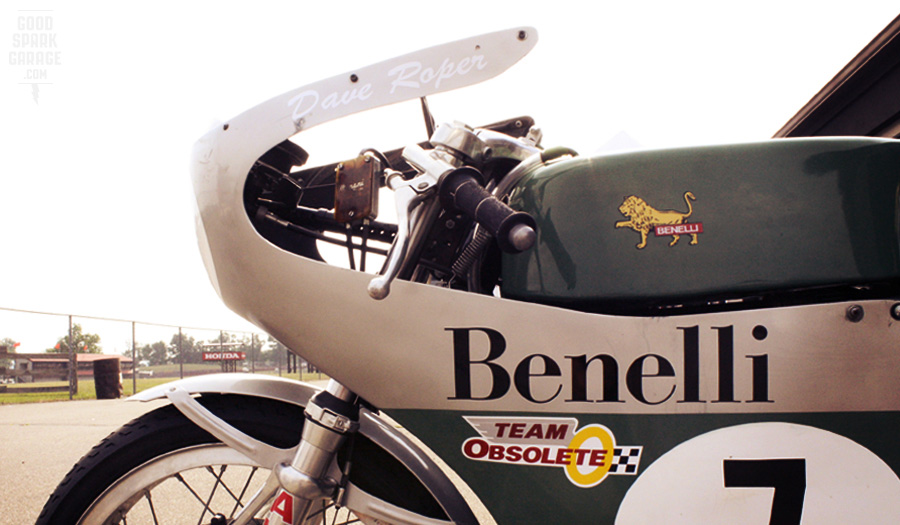 Below: Dave also raced this early-80s Team Obsolete Harley XR909 during AMA Vintage Motorcycle Days at Mid-Ohio. This had a li’l more horsepressure. Its pipes beat the air unmercifully. 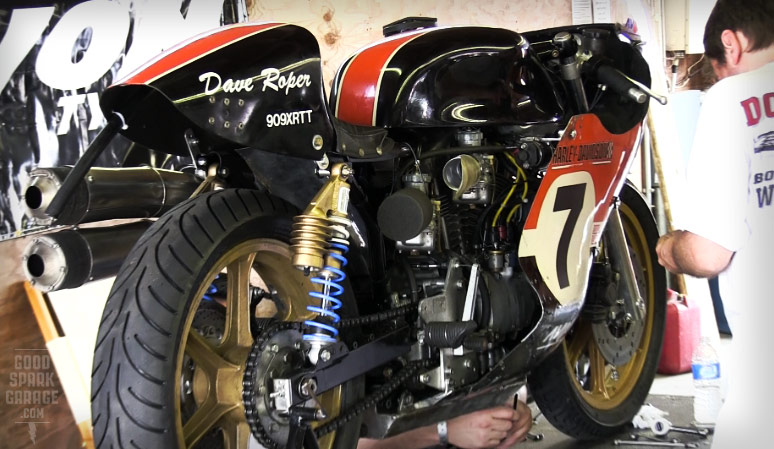 A note to parents: If you ever have an opportunity to attend an event where a guy like Dave Roper is racing or spectating, walk your kids over to him and show them what one variation of a true motorcycle legend looks like. They should know these things.

Each summer, Heindl Engineering hosts a rally at their Western Ohio sales & service shop where a large contingent…