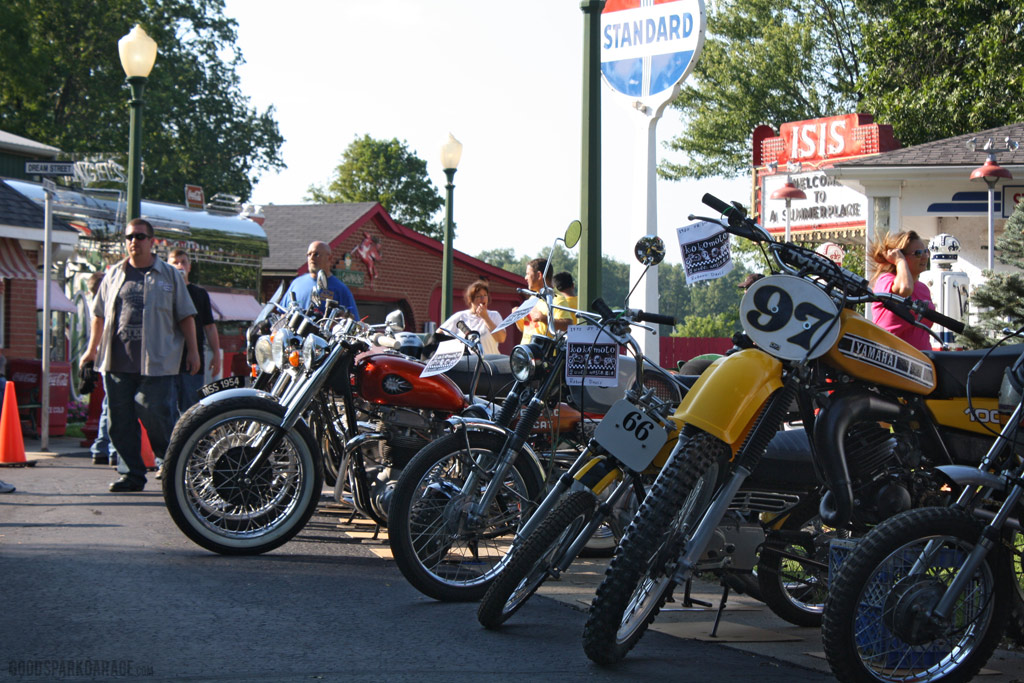 Tucked away off Highway 19, just north of Tipton, Indiana, is a concentrated slice of Americana called, “A Summer Place.” It was the location chosen by the Davis Brothers of Kokomo, to host the 2nd Annual Kokomoto Vintage Bike Show. We fired up the bikes, rode north through pretty farmland, a few small towns and dropped in on the nostalgic bike show (streetbikes, scooters, dirtbikes and even bicycles were welcome). 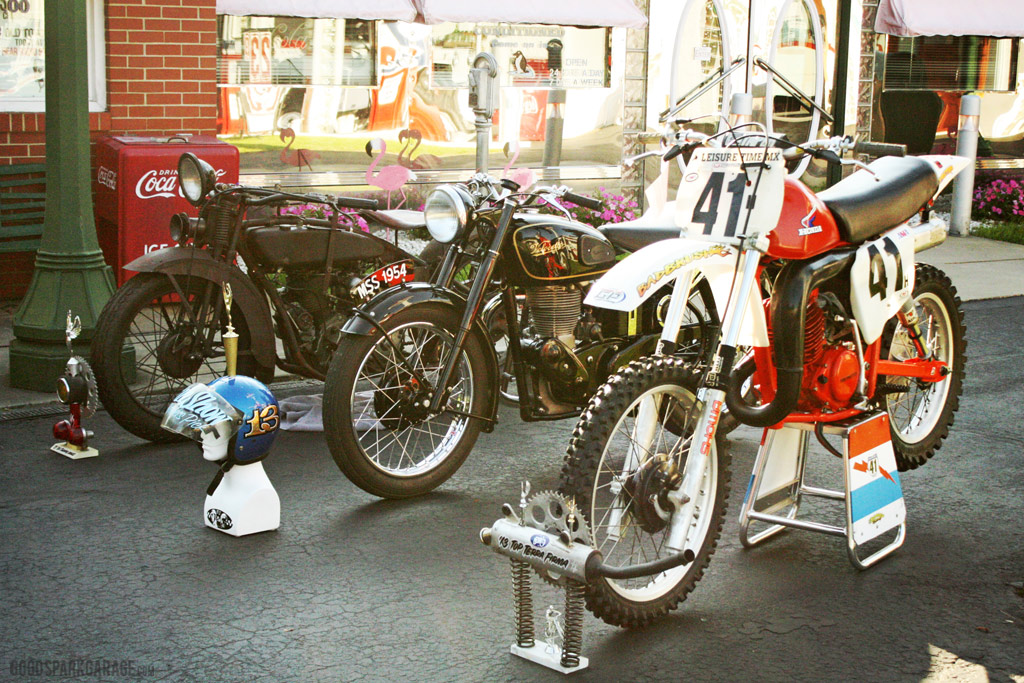 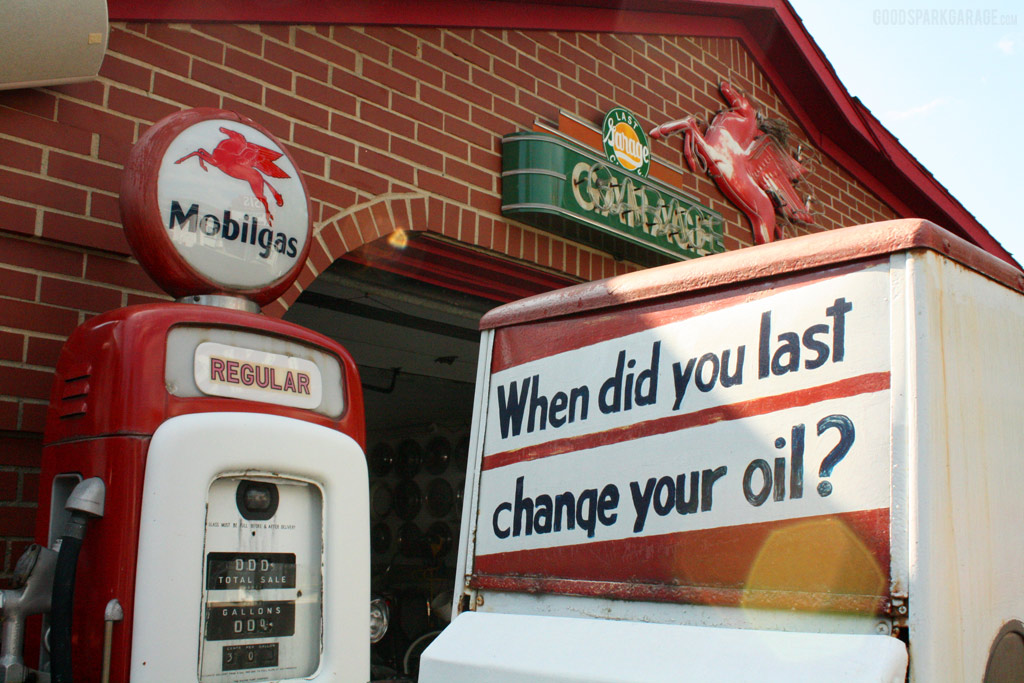 A Summer Place sits on the property of Jim Richardson, a man whose endless summers are preserved in his own backyard. Surrounded by trees, a blacktop drive leads you to Jim’s homage to the 50s when Sunday drives, deco diners and chromed fins were common. 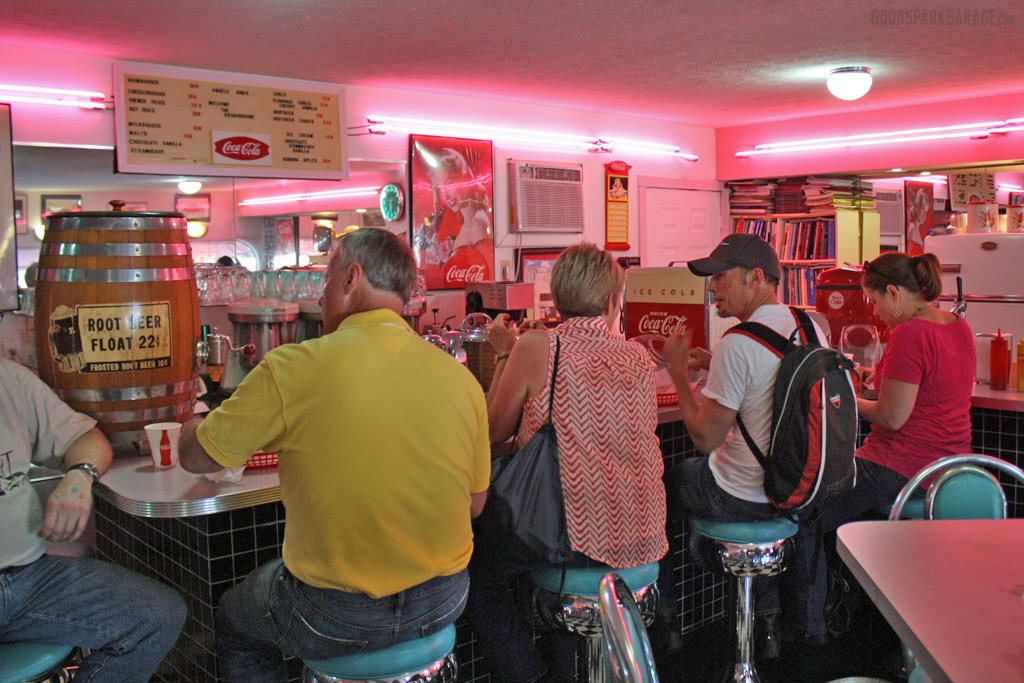 Guests of Kokomoto pulled up a stool at the fully functional, polished stainless steel diner and enjoyed a burger, fries and a Coke (add vanilla or cherry if you’d like). 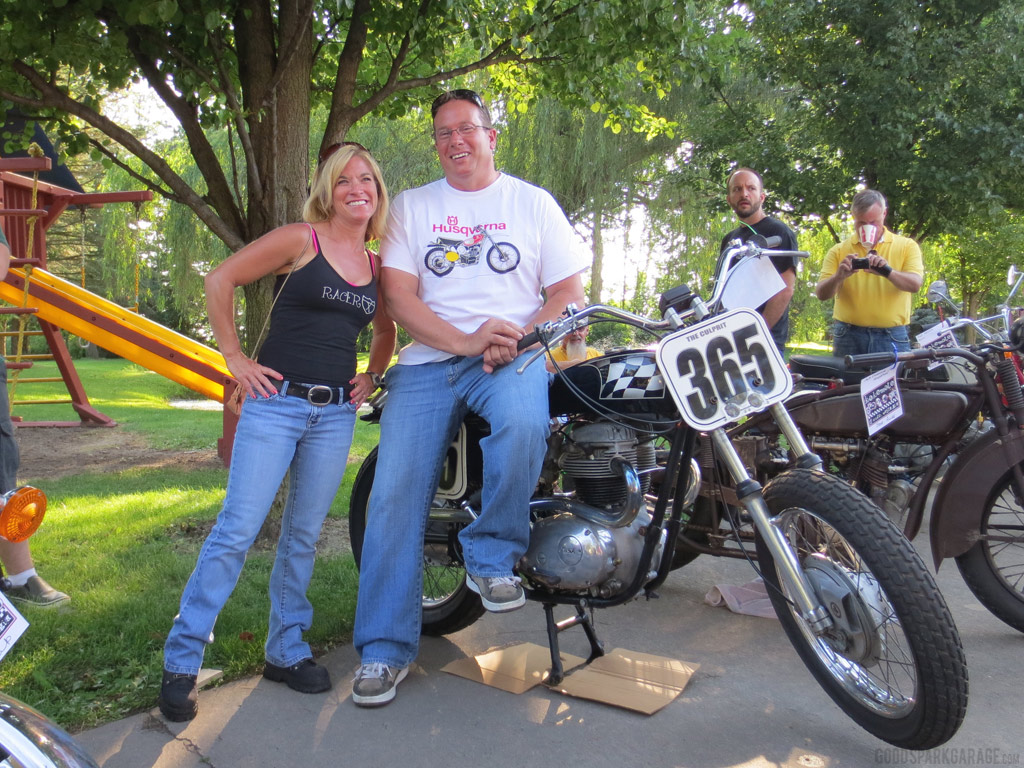 Motorcycle couple, Sid and Dana, rode in on their vintage bikes, a Triumph street tracker and an RD350. 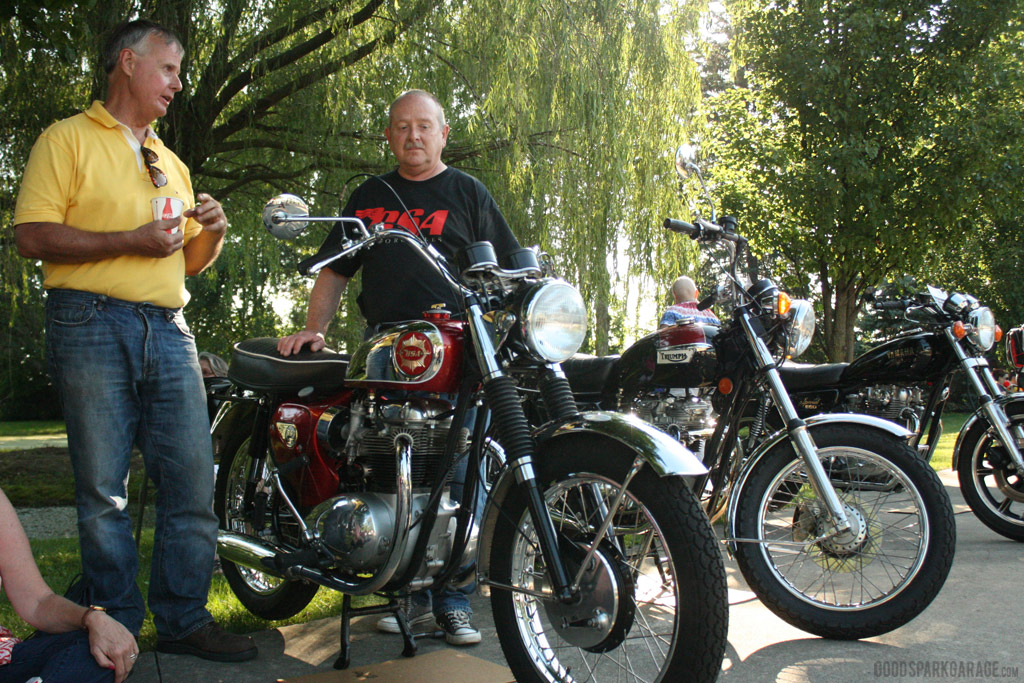 A number of vintage Japanese, European and American bikes were parked along the well-manicured property. 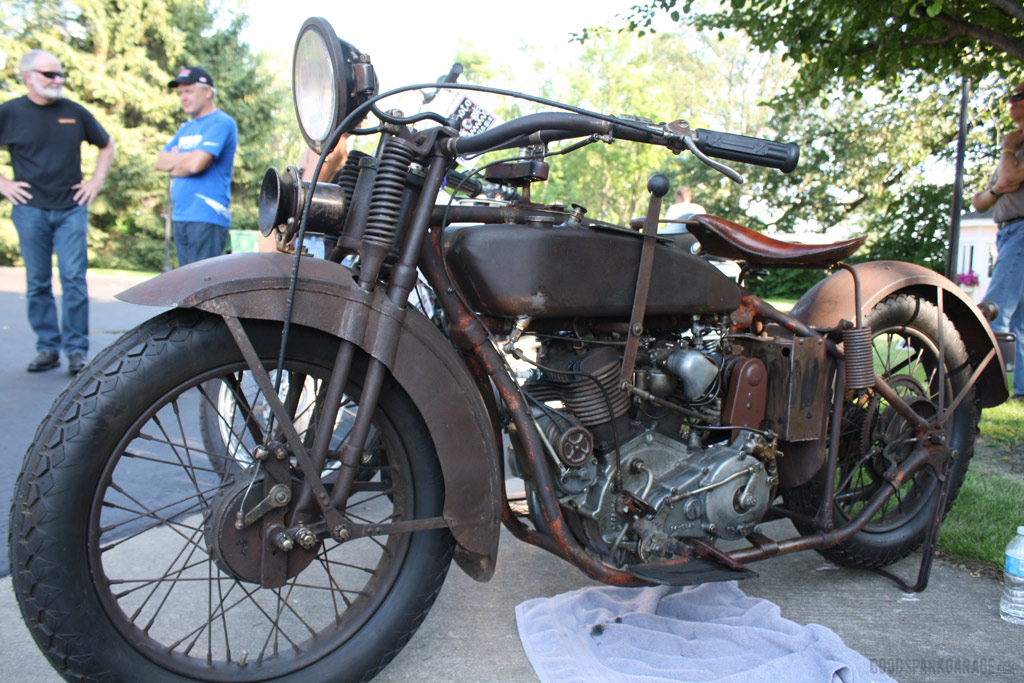 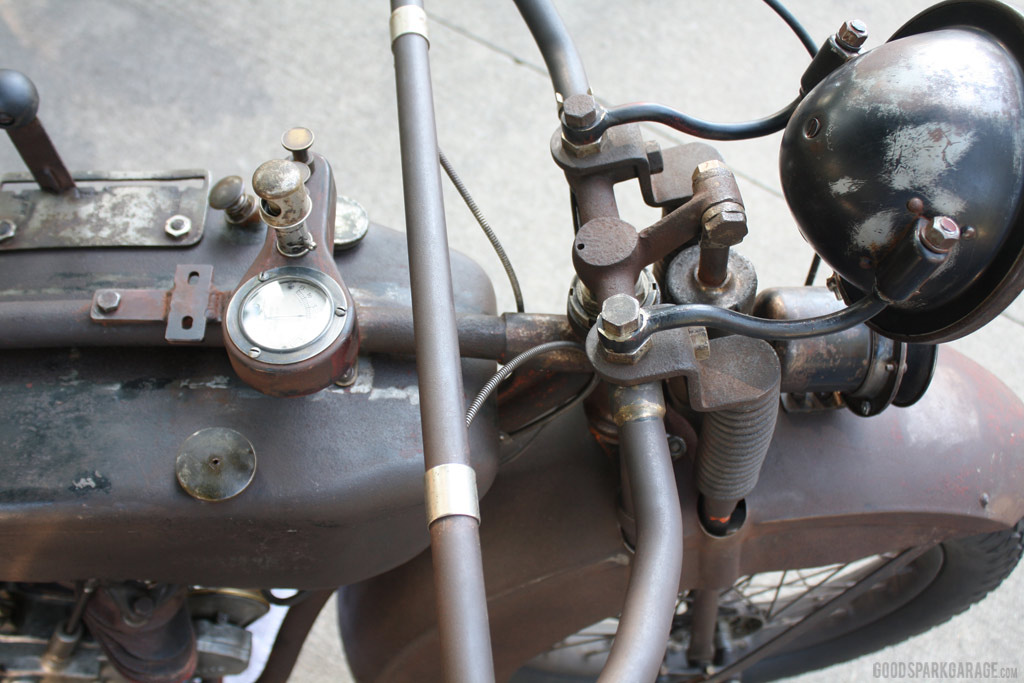 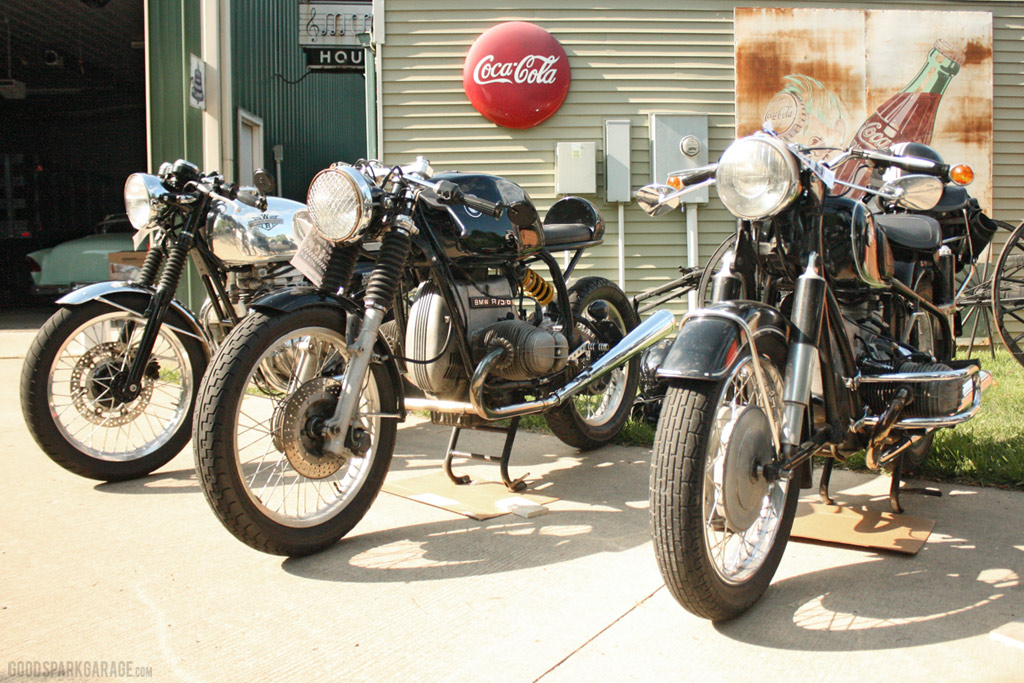 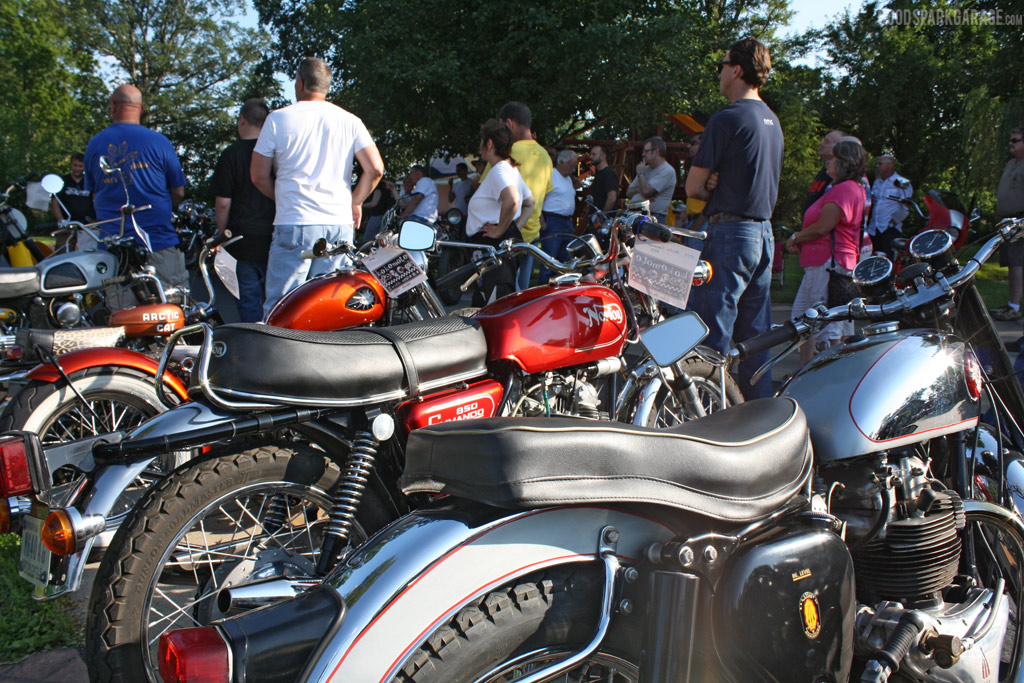 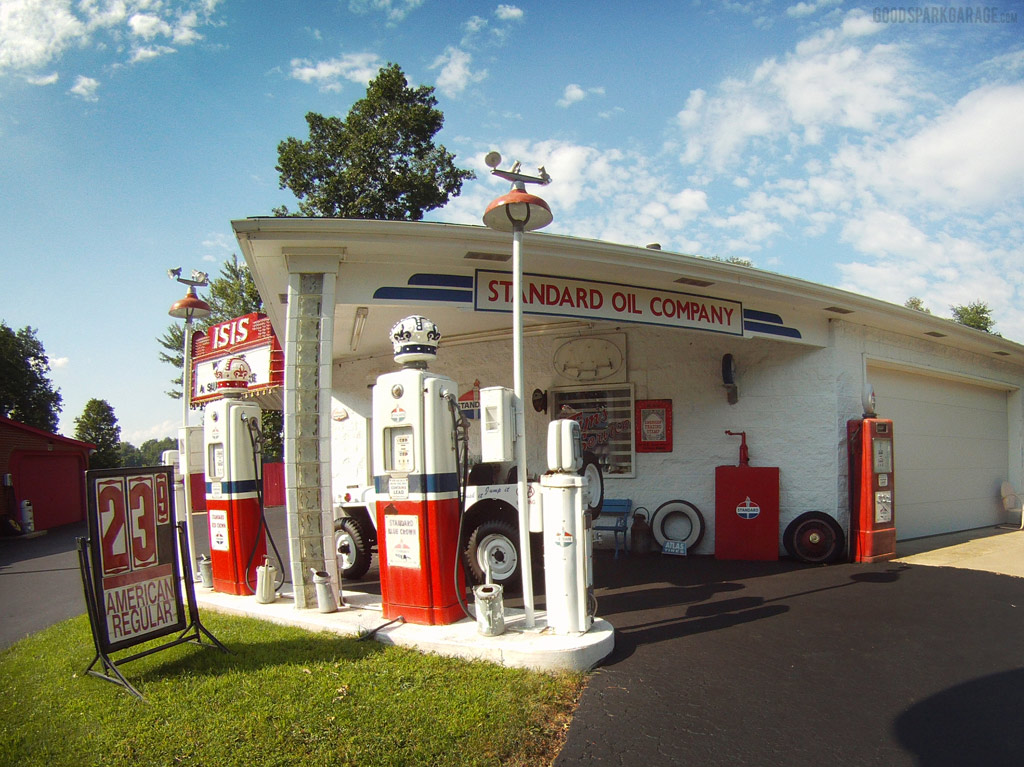 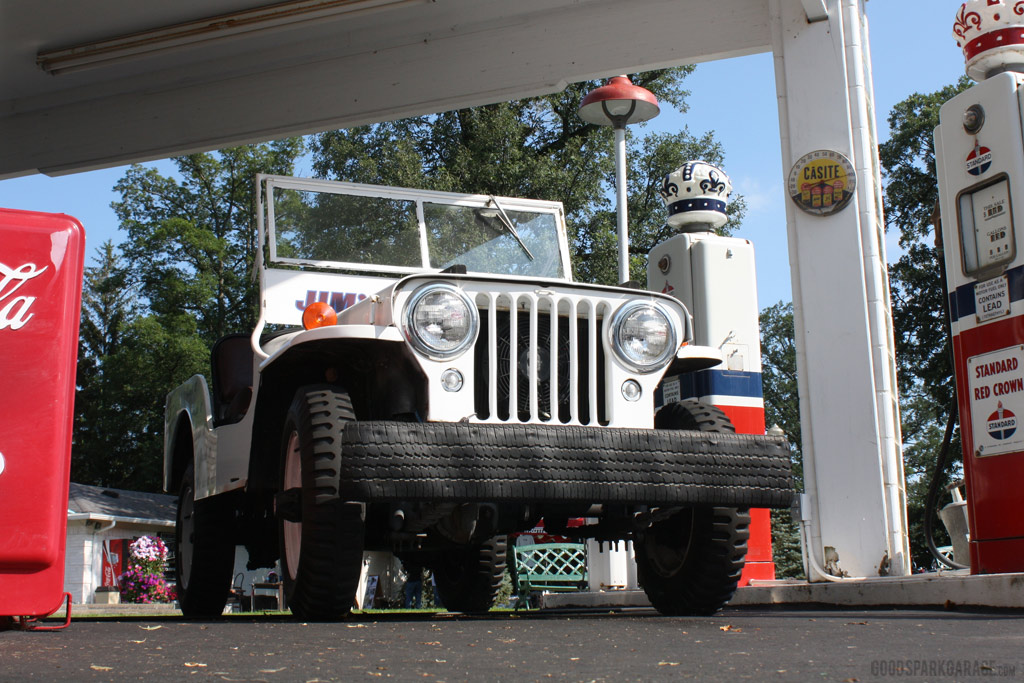 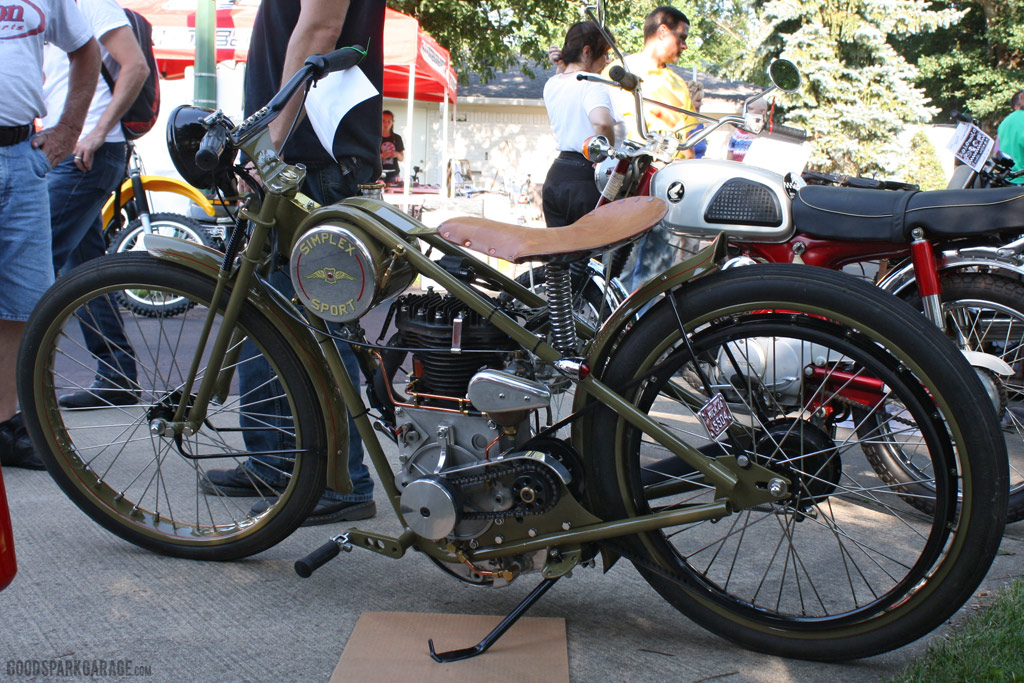 A complex reconfiguration on Steve Lorenz’s 1944 Simplex Sport with a Gravely tractor engine. 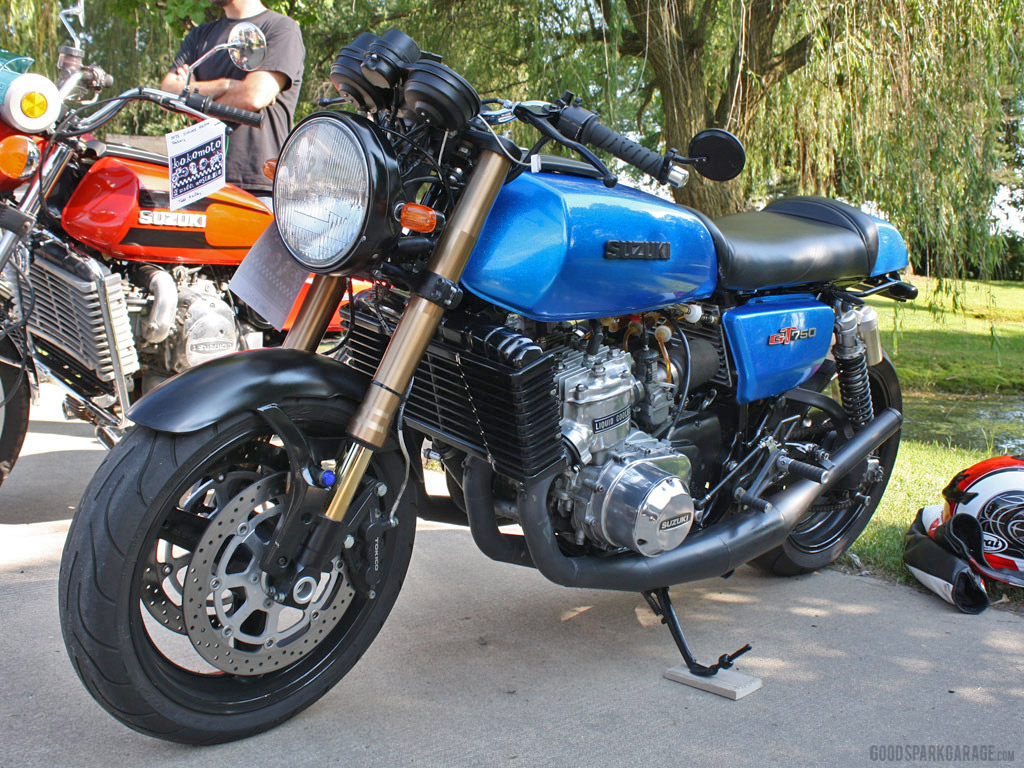 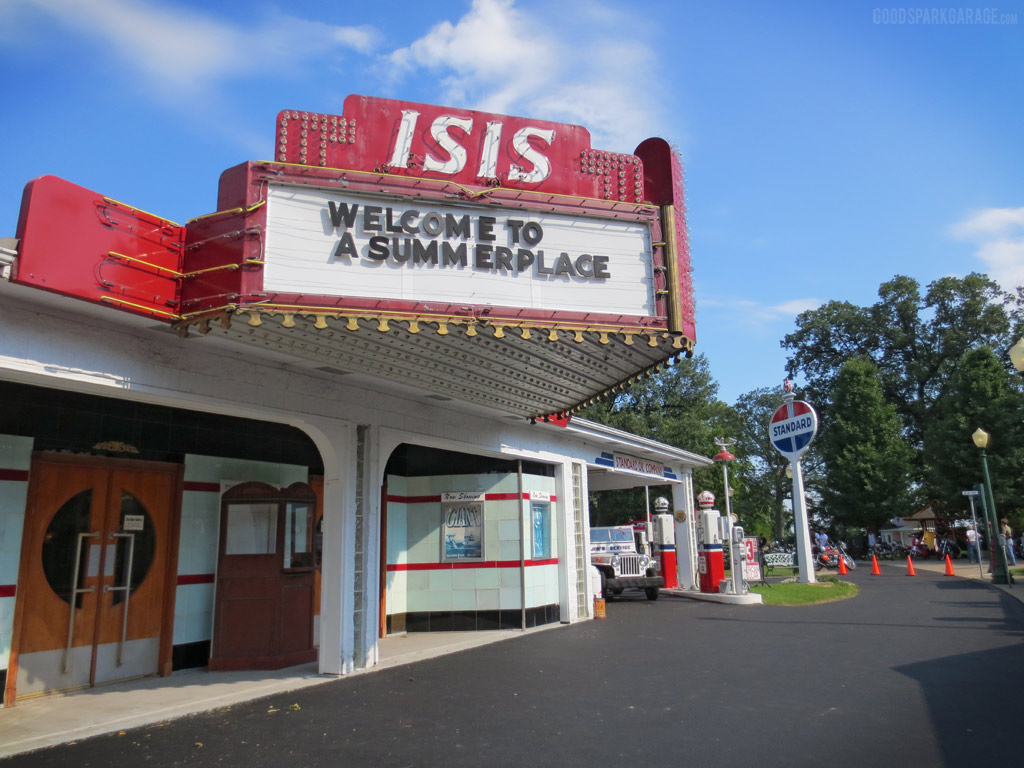 This theater ain’t just a facade, it hosts groups of people for special shows especially during Christmas. Proceeds of A Summer Place go to the Richardson family’s “A Home for Every Child Foundation,” which provides support and financial assistance for adoptive families. 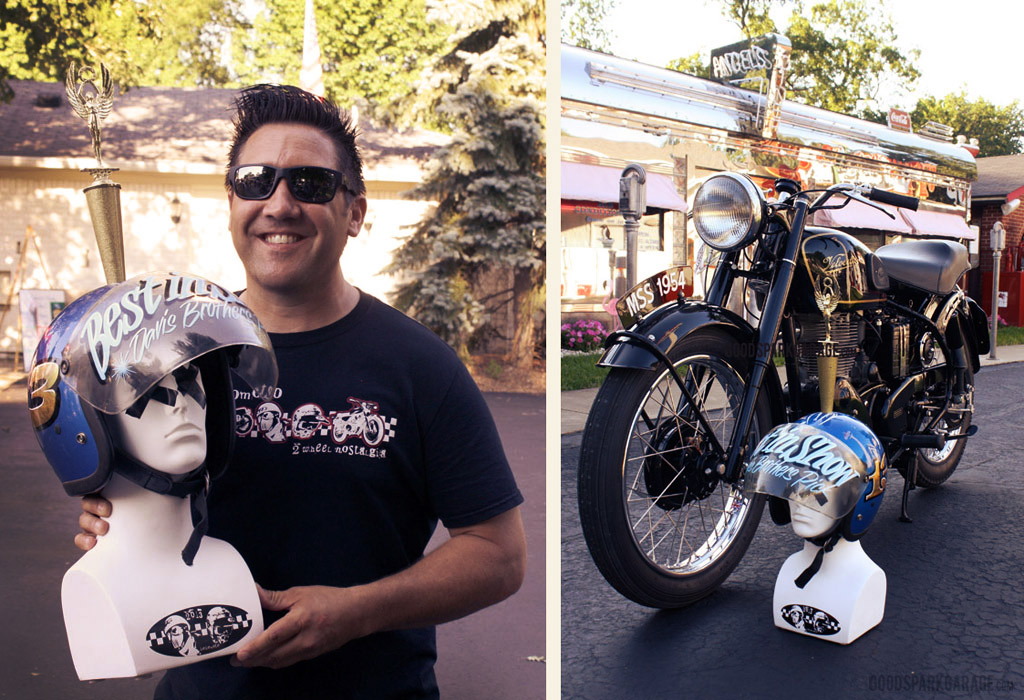 Joey Beher accepts the Best in Show trophy for his dad’s bike. Dan Beher (who had just left the show to attend a sprint car race nearby) just recently restored this 1954 Velocette. The trophy was assembled by the Davis Bros and hand-painted/lettered by Brad Plantenga of Bullseye Visual. 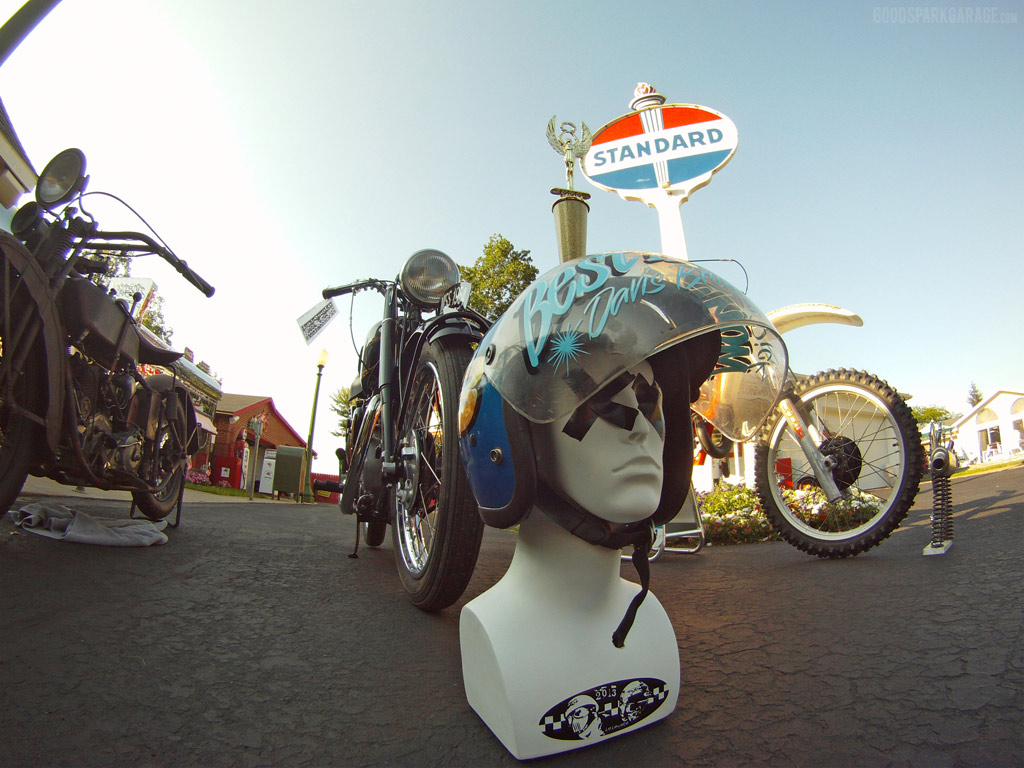 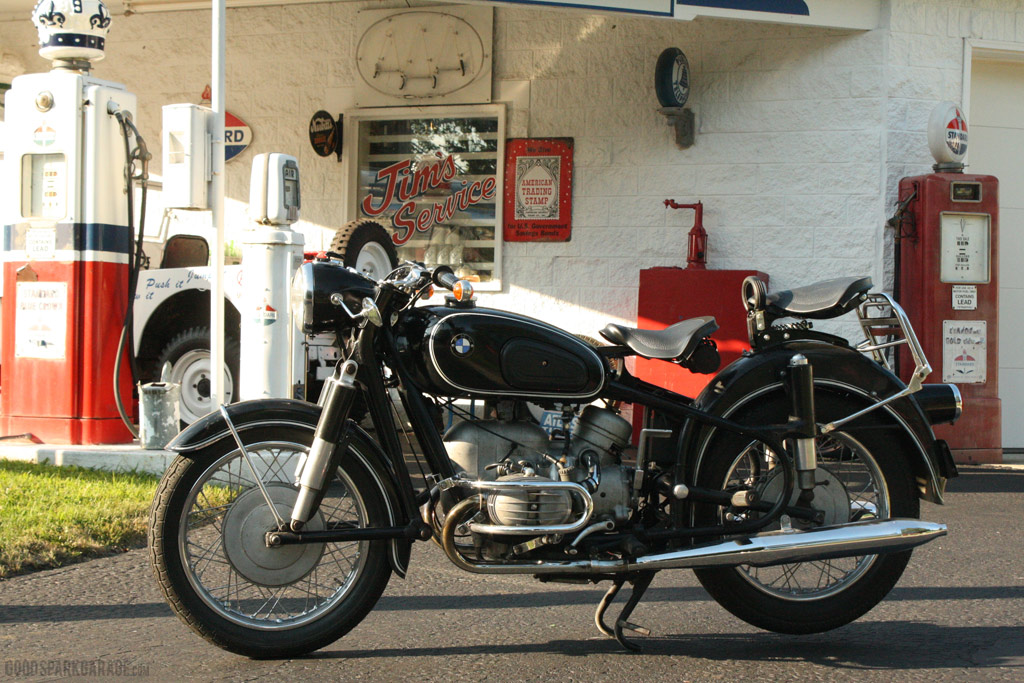 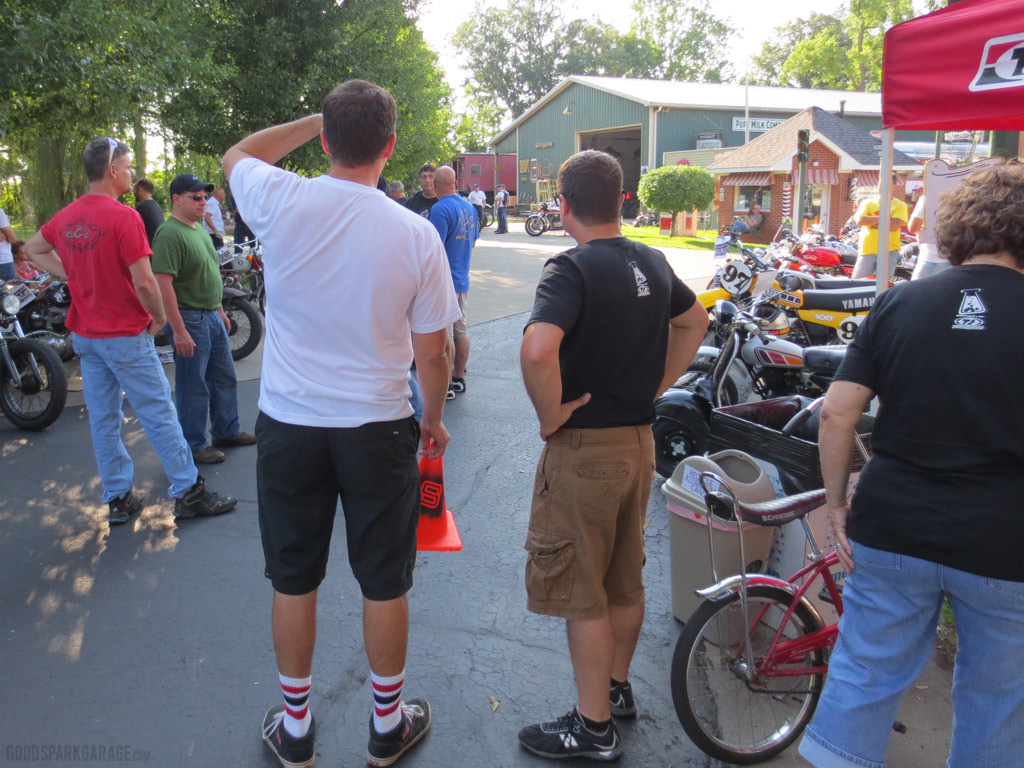 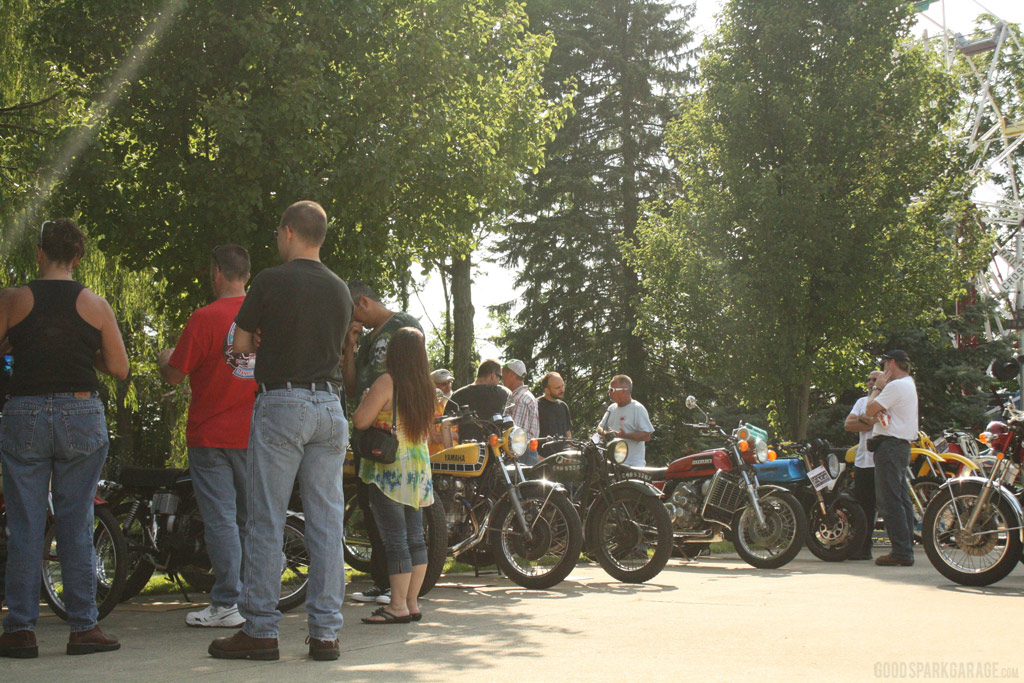 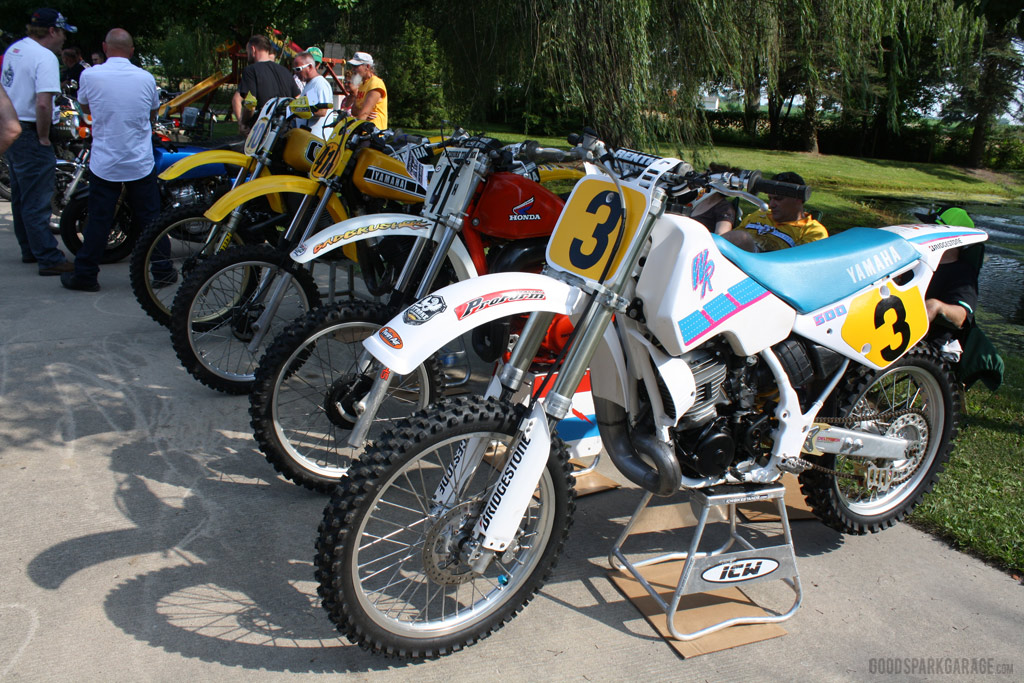 The Davis bros, Robert and Matt, own and operate Graphics Lab and Throttle Jockey, stemming from their lifelong interest and pursuit of dirtbike racing and bicycling. Here’s Matt below rockin’ the Schwinn Sting Ray. 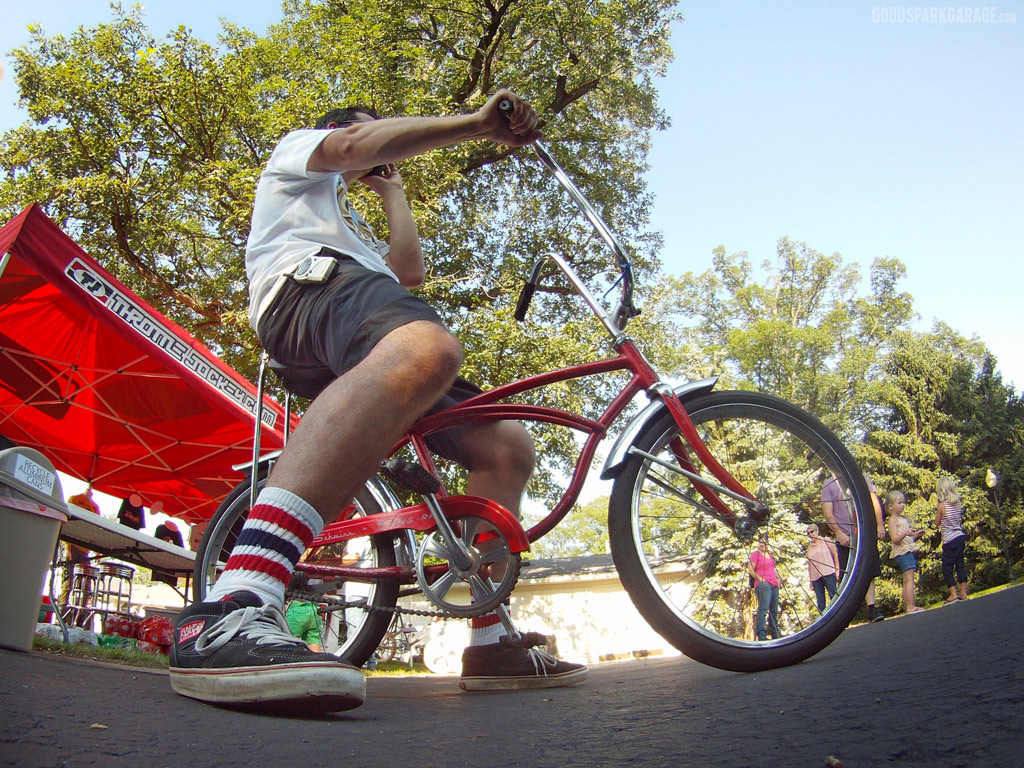 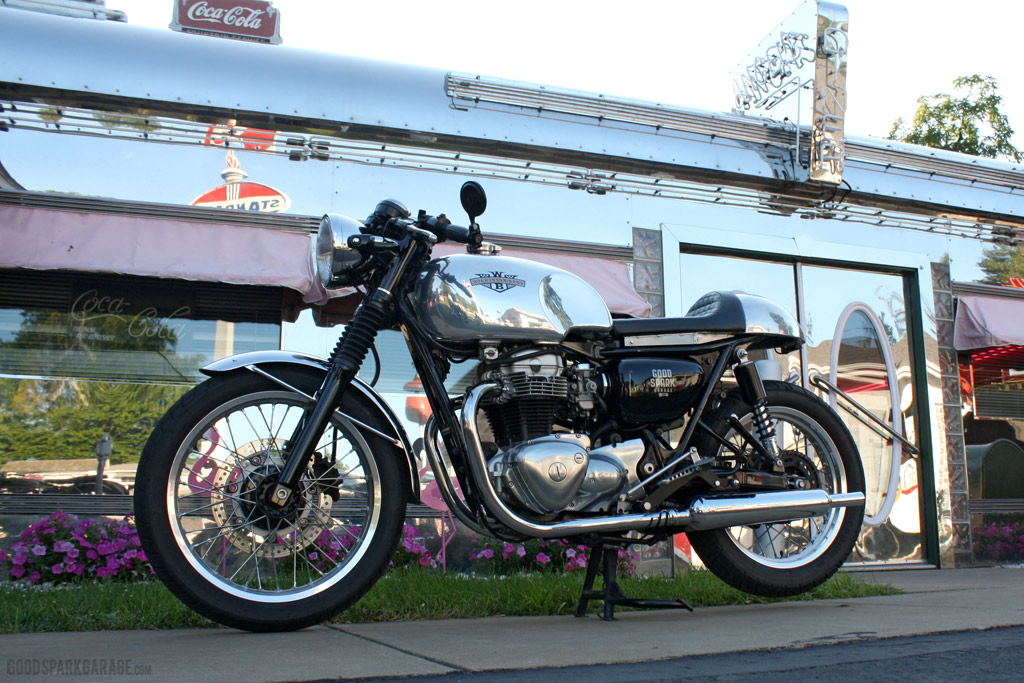 There are many opportunities for photo ops at A Summer Place. I had to pull the shiny W650 up next to the polished diner for a reflection-themed Kodak moment. 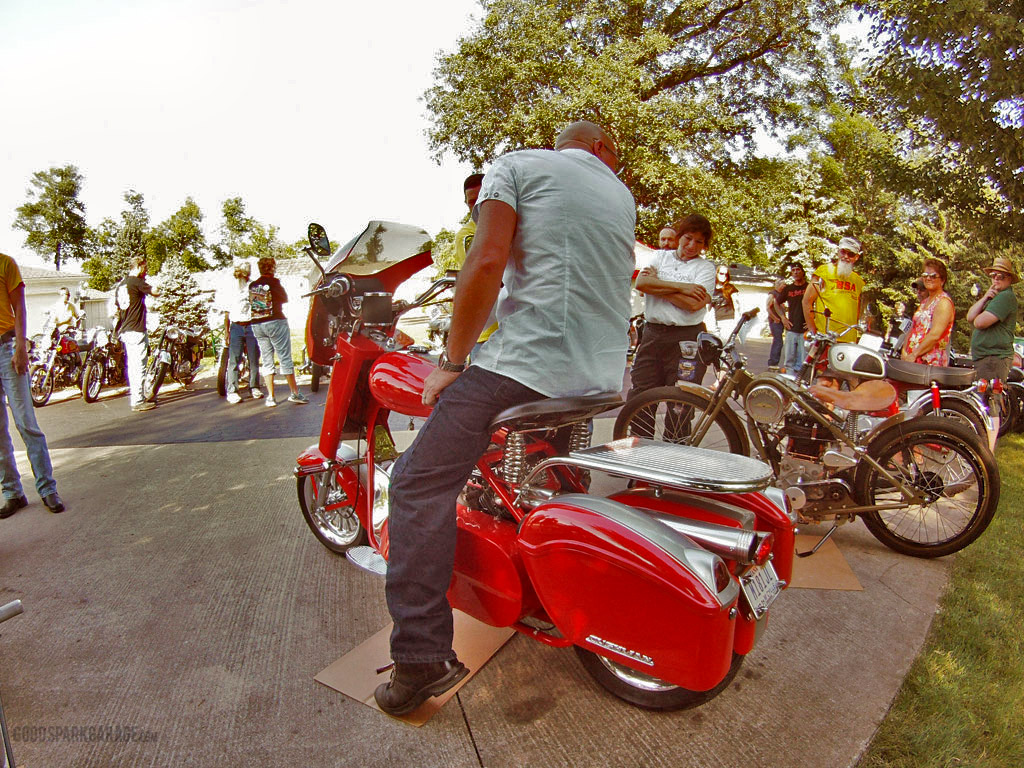 Above: Steve Lorenz from Arcadia Cushman and his hot rod “ReBelle.” 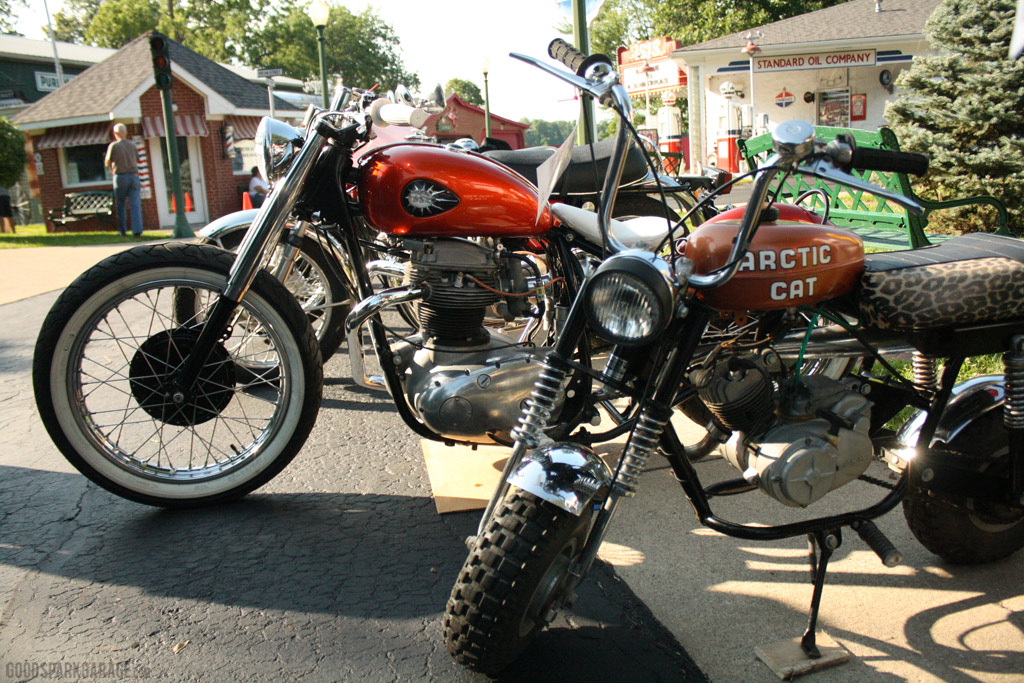 Joey Beher’s custom BSA chopper parked next to this mini-bike is a good example of the wide variety of bikes at the show. 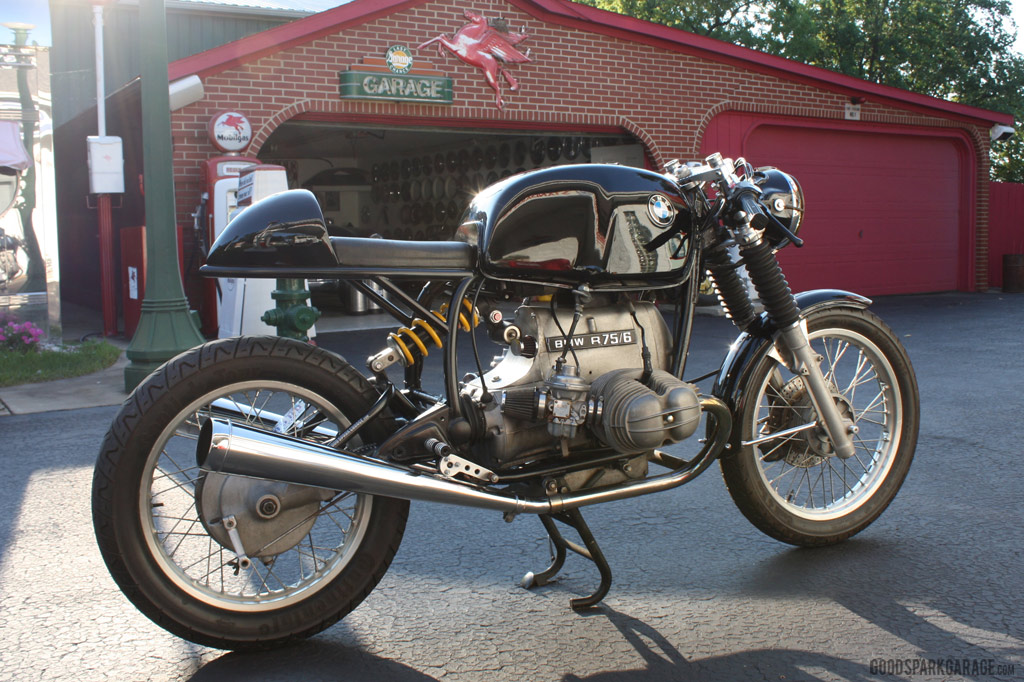 Casey’s BMW in front of a garage filled with more memorabilia, including a 50s Oldsmobile Sherrif’s car and a wall full of period hub caps. 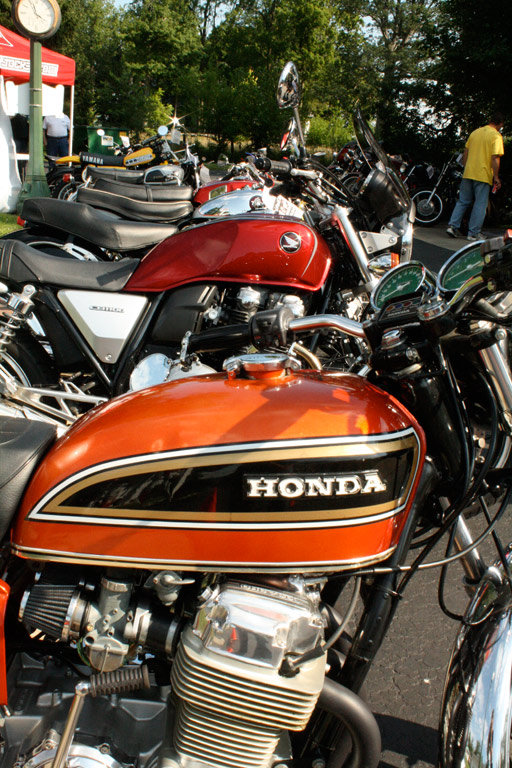 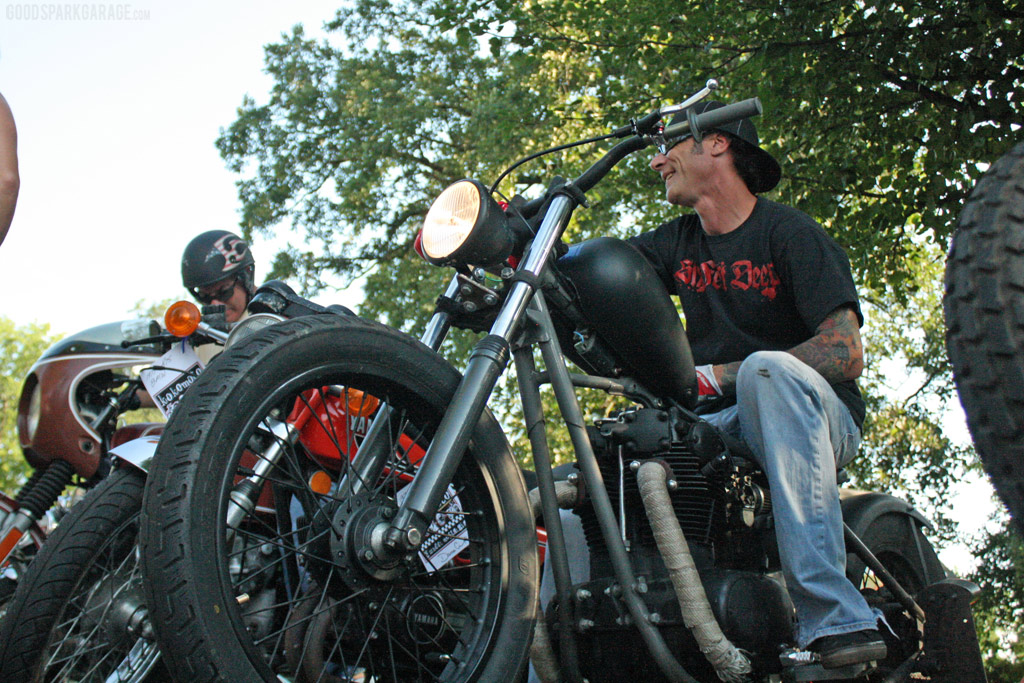 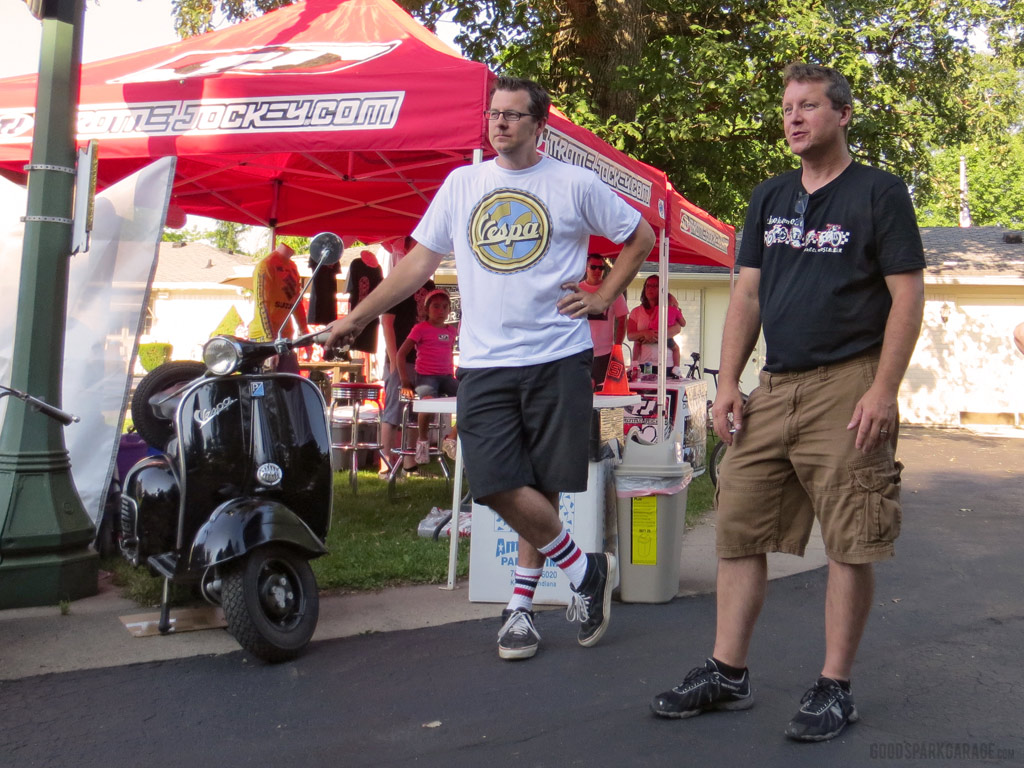 Matt (left) and Robert took a moment to talk with and thank the attendees. It’s their intention to grow Kokomoto into a must-attend event for area vintage motorcycle enthusiasts. Their passion for bikes is obvious, and their aim is to create an event where folks can immerse themselves in moto-camaraderie.

Robert summed it up with, “We’re all motorcyclists, that’s the bottom line. I don’t care what brand it is, bring out your old stuff; we wanna see it.”

With a football in the trunk of one of our sidecar motorcycles, a trick shot was…

Imagine buying a home and finding out it once belonged to a legend. A larger-than-life character with a…