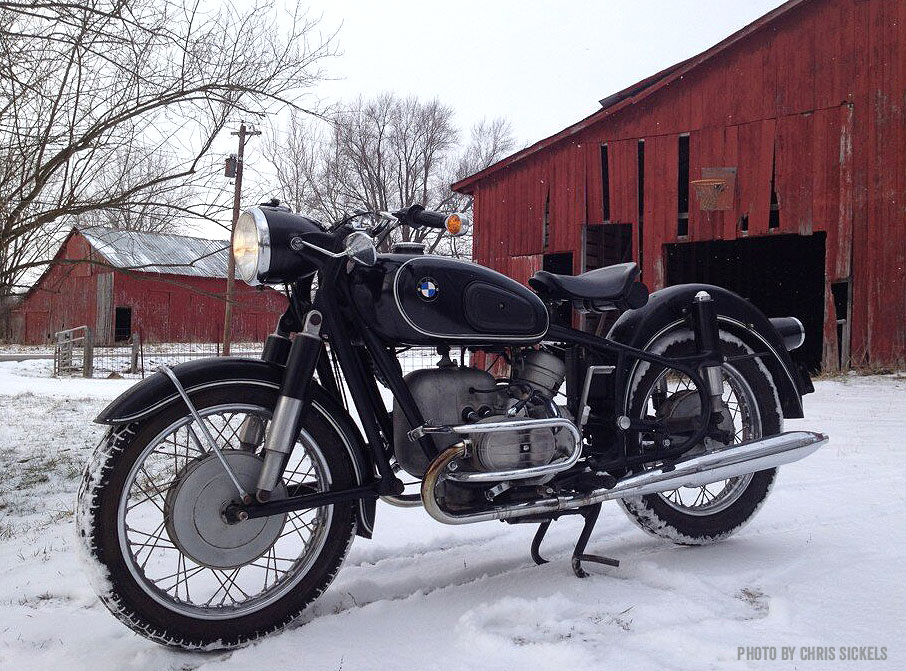 Driving slowly in the dark at 4:45am, Casey and I spotted a glowing iPhone waving at us. We pulled along the curb and our buddy, Chris, hopped in. It would be the beginning of a 2-hour conversation about motorcycles as we drove south. None of us are early birds, but we were wide-awake that morning.

Chris is a fellow artist and vintage motorcyclist (see our feature about him here). We often talk shop and discuss our mutual affinity for old bike patina. We agree that wear-n-tear adds charm to a bike.

Exiting the highway toward our rural destination, I wondered if Chris had the jitters. An envelope of cash was burning a hole in his pocket. Not far down the road now, a 46-year old German motorcycle needed a new home. 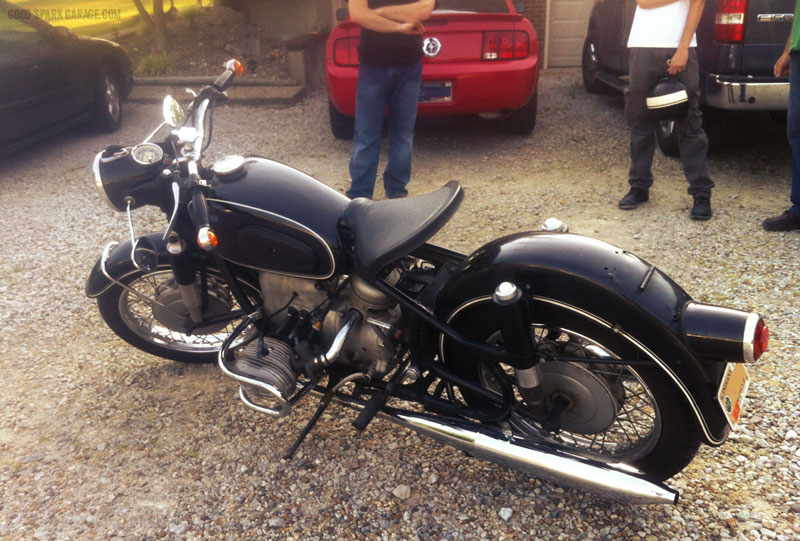 Chris had been looking for a BMW R60/2 and this one surfaced relatively close, prompting the assembly of our three-man recon team. After talking what-ifs and what-to-look-fors, we pulled into the gravel driveway where the ol’ Slash-2 was waiting. Its bulbous cast aluminum and funky opposed-twin engine brings a smile to our faces. We’re all fans of its suspended saddle seat, cumbersome Earle’s fork and big ol’ metal fenders. We immediately began sizing it up, breaking only for a moment to shake hands with the seller, then re-fixing our collective gaze upon it.

It’s an interesting moment of psychology, as the buyer evaluates the goods while the seller looks on. Chris ran a finger over the dings and politely felt a patch of steel scarred by battery acid. Folks that buy vintage things know this procedure, it’s an outward display of tallying flaws and assessing its value. But, the longer Chris looked over the bike, coupled with our nodding glances of early favor, meant we might end up lowering the tailgate for this one soon.

First, a test ride was in order. Our Dad was a firm believer that you shouldn’t buy a bike without riding it. Only due to sheets of ice on northern winter roads have we not test-ridden a bike. On this day the mercury would climb to 105 degrees Fahrenheit. And it was a day that ol’ airhead would balk and drip and smell like it wasn’t gonna start. Sweat poured as we took turns kicking the awkward, short-throw lever. It’s one of those moments as a buyer that, while your concern goes up, it can help the price come down. Not a horrible scenario for us non-independently wealthy types.

It came to life, eventually. Idled great and plunked down into first easily. Since Casey is familiar with shaft-driven airheads, he volunteered to feel it out initially. Chris would be graduating from a small, unashamedly slow H-D Pacer, so this 600cc twin would be a considerable jump in all areas from his 175cc 2-stroke. After a short, but long enough spin through the rural roads, Casey returned with a smile and show of appreciation to the seller. “It feels good,” he said, keeping any exuberance to a minimum so as not to devalue Chris’ bargaining ammo.

We stood aside to let the negotiation ensue. Maybe it wasn’t as clean as we expected. Maybe the bike’s inability to fire right up made us hesitant. But, out of earshot, Casey leaned over and said, “if Chris rides it, he’s going to want to buy it.” He was right. Chris gave it a spin. He felt the smooth, torquey engine and true German handling. He returned with intent. 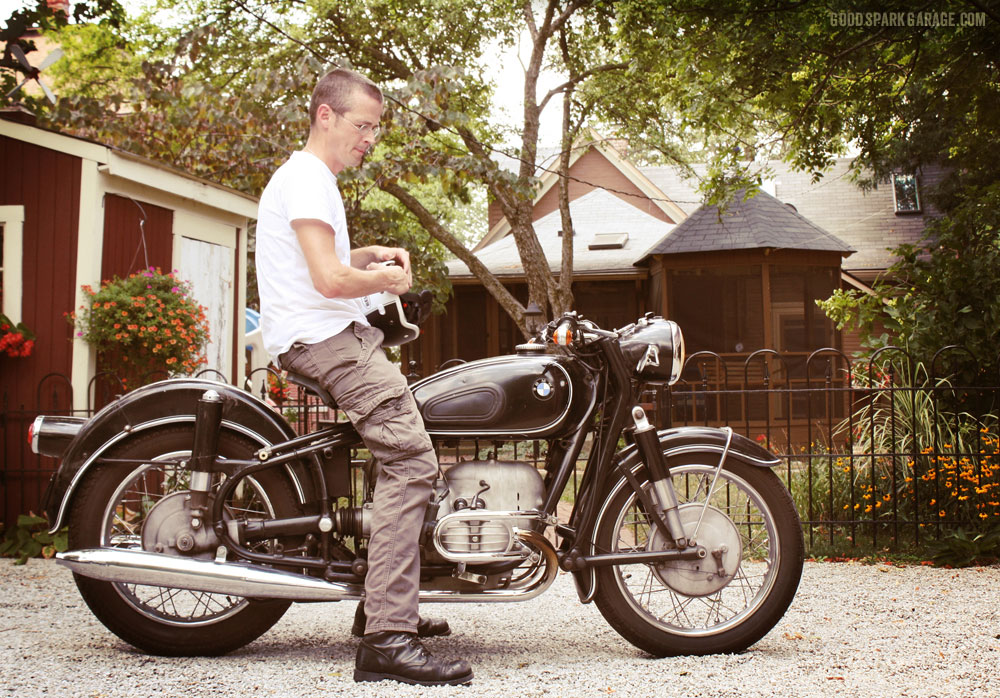 Both parties understood that the price needed to come down due to the mysterious starting hiccup, but their initial exchange didn’t line up. That’s normal.

After a span of time filled with hands on hips and toes pushing gravel, a number was amicably landed on. We readied the ramp and untangled the tie-downs. Chris was now the owner of a vintage BMW that was oozing character. One that would fit his personality well and quench his desire for a Slash 2. There are few things that deliver the kind of enthusiasm we get when we see someone acquire a motorcycle they’ve had a hankering for.

Title signed over, a final handshake with the seller and we were headed back to Indy. We smiled and did a play-by-play recap of the negotiation and talked about how fun this bike was going to be. It was a great find and a great buy. Two hours passed by pretty quickly and the closer we got to Chris’ house, the more eager we were to unload and test ride it some more.

Back home, we roll-started it with ease and took turns making loops in the neighborhood. It looked great dicing through the old homes and urban streets.

I hopped on the Pacer and Chris rode the “new” Beemer as Casey followed in the truck to go grab a sandwich. All stress of the daily grind aside and no concerns about what chores needed to be done, this was a small window of time when simple conversation of old bikes and the thrill of finding them removes us from the rat race.

It’s been awhile since Chris’ acquisition of the BMW and many miles have been logged on the ol’ airhead, but it still reminds us of the fun and camaraderie vintage bikes lead to. The challenge, trouble and joy of finding and assessing them makes for great travels with friends and family. We wonder what the next motorcycle will be, that sends us on a hunt. 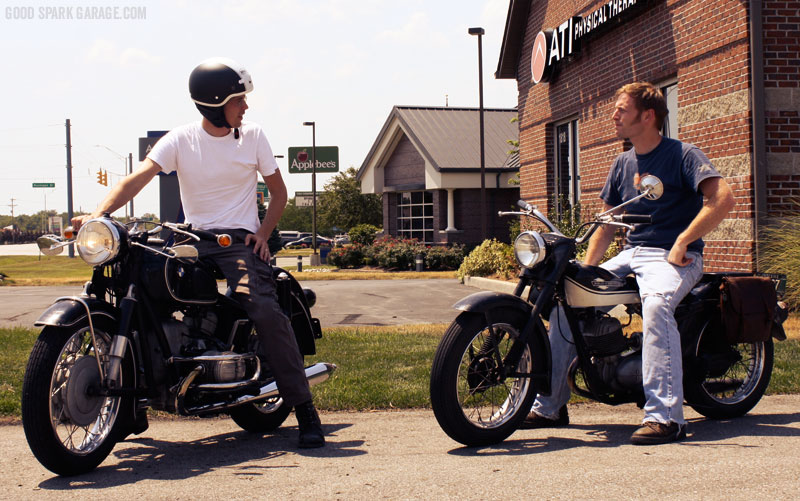 We appreciate a good, midwestern bike event. Chicago, Louisville, Indy, Cincy and, for this story, Milwaukee; they're towns…