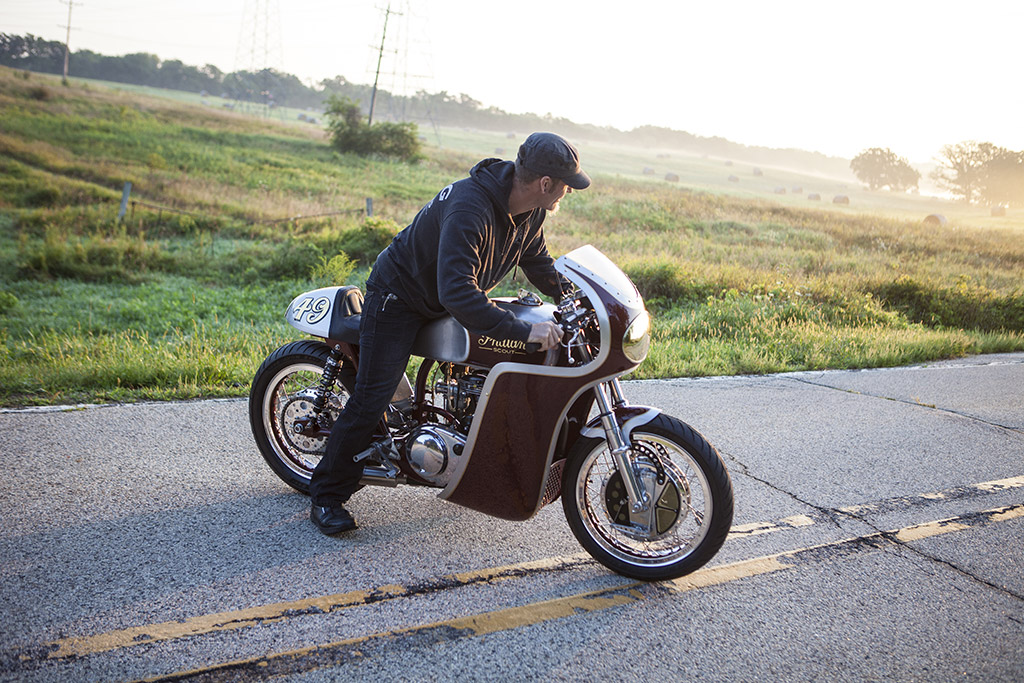 Tony Prust’s northern Chicago shop, Analog Motorcycles, has maintained a solid and steady presence in the custom motorcycle realm and garners much attention on the web. We wanted to share his latest build, the Continental Scout featured on BikeEXIF, but dig a little deeper into the mind behind the machine.

We often cross paths with Tony at Midwest motorcycle events, which gives us a chance to talk shop and discuss the ever-changing climate of custom bike building. In an industry that’s sometimes fickle or trend dependent, there’s always a certain kind of jockeying for position among its characters. Something we admire about the Midwestern builder is that he tries to remain unaware of any custom genre drama and doesn’t subscribe to a “who’s who” mentality; he focuses strictly on honing his craft.

If you’ve read the BikeEXIF article featuring Tony’s pièce de résistance, you’re aware of the pride he has for his “Continental Scout” (so named for the global sum of its parts). The stumbled-upon, neglected Indian became an expertly crafted amalgam of custom elements surrounding the revived 1949 parallel-twin Scout engine (see the thorough list of parts and sources at the end of the article). Read the As to our Qs below for a window into his world of custom bike building.

“I envisioned a replica racer from the 60s & 70s based around this little engine.”

GSG: The Continental Scout is your brainchild with countless hours of hands-on fabrication. At what point do you decide to call in an outside source to carry out your vision?
Prust: I have been getting more and more creative with each build I try and tackle. So much so, that my creativity is surpassing my ability in some aspects. Aluminum welding and metal shaping are skills that I am “in process” of honing, but when I have a vision stuck in my head for something I cannot achieve myself, I choose to farm it out. Cutting corners for me has never really been an option when it comes to design and how I see things.

GSG: What does your heart prefer: commissioned builds or spec builds?
Prust: Spec builds, and I have actually closed the door on commissioned builds for the time being. I am currently booked-out into 2015. After that, the idea is to focus a little more on parts and spec builds only. I like to have total creative control. It allows me to do what I see fit and not have to watch the clock as closely.

GSG: About his music, Ricky Nelson sang “you can’t please everyone, so you’ve got to please yourself.” Does this sentiment apply to custom bike building?
Prust: It totally does. I am pretty much under the rule of thumb that if I am happy and the customer is happy, that is all that really matters. I seldom read the comments after I release a bike into the public anymore. My wife reads them and gets worked up on occasion, but you know what they say about opinions, they are like (fill in the blank). I never really understood why one would take the time to type something negative. If you don’t like it, move on. I have done a lot of shows where I display a bike; people walk by and look or don’t look. Typically if someone (A) likes it, they will stop and stare or ask a question and give kind words. If someone (B) doesn’t like it, they walk on by. Funny how the internet allows the same “B” people the ability to give the world their opinion. It’d be cool if, before the “B” people gave their $.02, they had to show the world their custom-built motorcycle. You know, just in case we builders wanted to critique it. 😉

GSG: Sketchpad concepts or design-on-the-fly with parts in hand?
Prust: I don’t draw really, so I have a sketchpad design…but it is in my head. And I fine-tune as the process unfolds.

GSG: What’s your perspective on the balance of performance vs. composition in a custom bike? Do you lean more toward one over the other?
Prust: I do not “lean” one way or the other as I try to achieve both almost every time (depending on customers’ budget, of course, which goes back to spec vs commission builds). One thing I also try to achieve in the majority of my builds is the same functionality as modern bikes with horn, signals, gauges, high beam, kill-switch, etc., where they are actually needed. This Indian build and a couple others are the exception to the rule (with no signals or horn, at least) but generally speaking, I try to keep it fully-functional. I have come to the conclusion that if the bike performs well and is easy to ride, it will be ridden much more. And, after all, that’s what motorcycles are supposed to be for, correct?

GSG: What’s next for Analog?
Prust: I am in the process of two builds currently. First, a 1975 Ducati GTS860 that’s getting a full scrambler treatment to be complete before the new Ducati Scrambler launch. Second, a BMW R90/6; no style definition yet, but should be pretty sweet. Also working with British Customs in launching some more parts hopefully this year yet, but if not, in 2015. They just released my Analog 3T for the Triumph Thruxton in their Pro Builder Series parts line. A completely plug-and-play fender-eliminator kit modeled after the taillight used on the Bimota DB3.5 that I built for Cafe Racer TV. 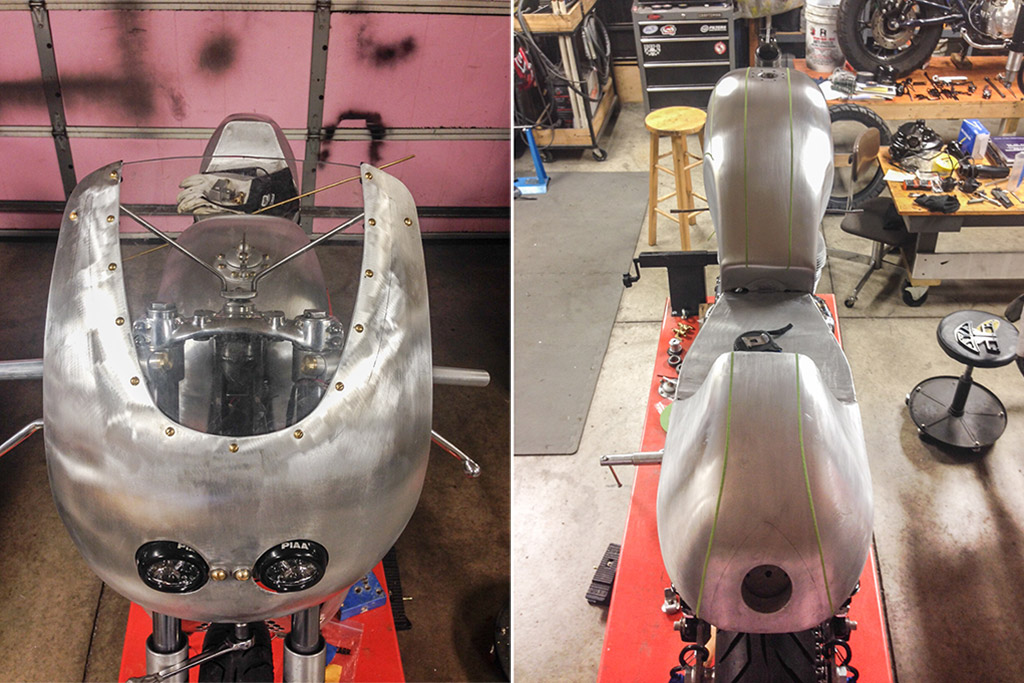 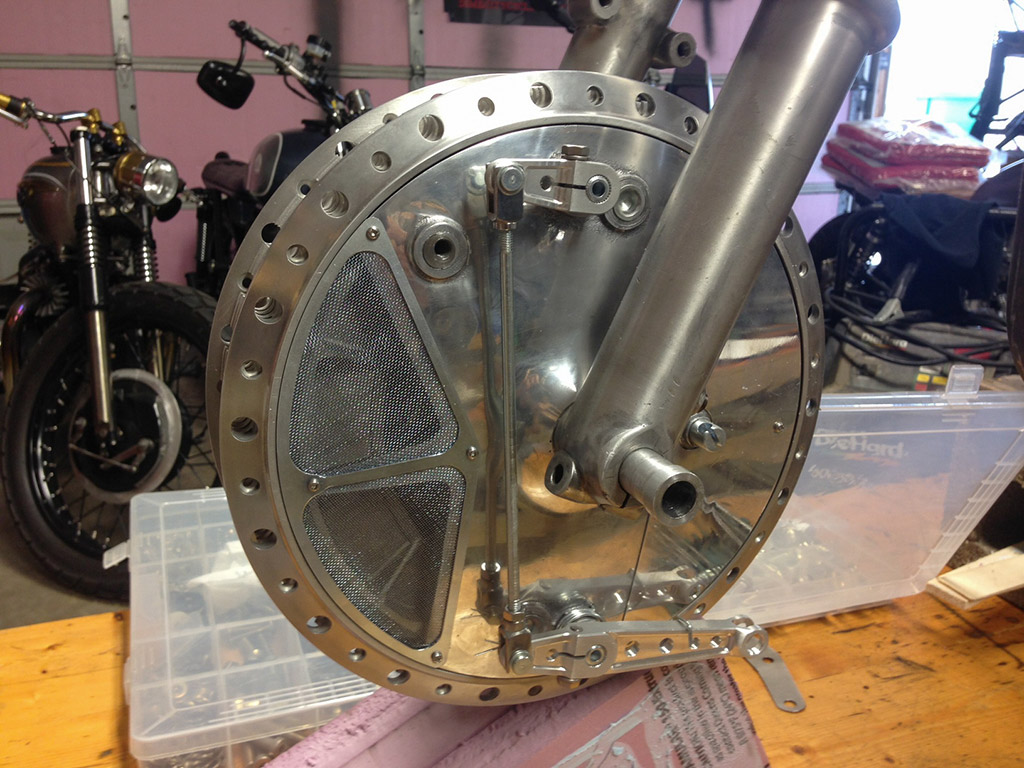 Keep an eye on Good Spark Garage for more moto-culture features and articles.

Motorcycling in a post-calamitous, resource-depleted existence requires the right gear. Provisions are low, so we’ve donned…