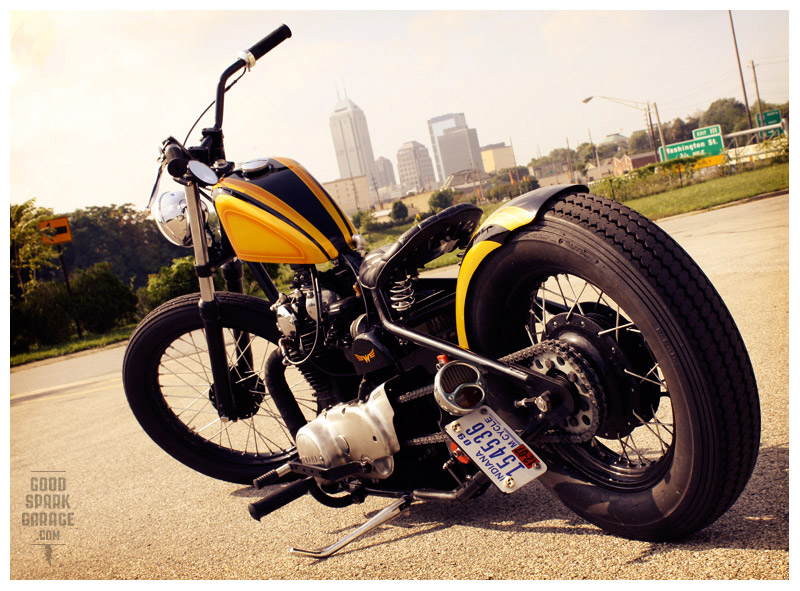 The background on this article: We wrote this a few years back when we pondered the thought of having a custom chopper powered by a vintage XS 650 engine as our shop bike. This story explains how we got there…

Two northbound rigs crashed together and spun out of control, according to a nearby trucker. My brother (Casey) and I were gridlocked for two hours on the interstate at 3 in the morn. Temps dropped, heavy rains turned to sleet and the road became the kind of ice you couldn’t walk on, but somehow you could drive on. The wreckage was pushed aside on I-65 and as soon as traffic cleared, we dropped the hammer and drug the Holsclaw across icy super slabs into Illinois. There, the perfect donor bike was waiting for us with a negotiable owner. We hoped.

If a talented bike-building kinda guy, with a shop full of all the tools you’d ever want, says he’ll build you a bobber if you provide a motor…you drop what you’re doin’ and make a bee line to a donor motor. Jon Ard is the capable fella I’m referring to. Ardcore Choppers and our design shop, Wilkinson Brothers, struck a deal and our mission was clear: Find a healthy XS650 engine and get it in his greasy hands, ASAP.

Our predicted 4-hour haul turned into a 7-hour trudge, including an exit-lane pass around a crawling wall of Chicago snowplows. Their 4-wide swath wasn’t gonna set us back any further, dadgumit. We soon entered barren lands where, unfortunately, “just outside of the City” turned into “way the heck out’n the country.” Craig’s List ‘poetic license’ at its finest.

We found the li’l town where the ‘78 Yammy resided. Got a little bummed that we couldn’t test-ride it due to glacier-like roadways and we’d soon learn that:
(1) it would be leaking a little oil
(2) it’d have a hose clamp holding on a muffler
(3) it was more haggard than its glamour shots
(4) its owner wouldn’t budge at a lower offer
Seven hours in the truck and the fear of not locating another increasingly hard-to-find XS650 soon, meant the dude was holding all the aces. So, ten minutes after walking that stiff-legged, road-wary walk up to a stranger’s house, we were strapping it down to our trailer. 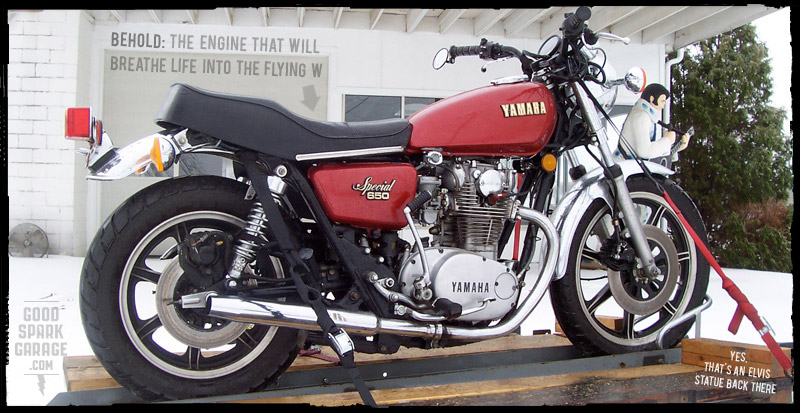 It’s now around noonish with blinding white snow everywhere. The bike is photogenic, God bless it, and as we retraced our way back to Indiana it grew on us. It’s a cool bike after all, with the kind of nostalgic qualities that lure restorers and chop-fiends alike. Confirmation of its coolness surfaced as a guy in a fast-approaching, clapped-out BMW paralleled us in the fast lane; he checked out the bike and made sure we acknowledged his thumbs-up. We smiled, assuming he had hunch we were gonna sacrifice it for something less practical and less wholesome. We hoped it would run as well as it sounded in the garage of the Illinoisan Craig’s Lister.

Back on home turf with the donor bike, we’re a step closer to owning a bobber. After roads thawed, we wanted to thrash it around before it goes under Jon’s knife. I suited up for the sub-freezing conditions as Casey found the appropriate starting methodology. It popped to life and idled like we’d hoped. An old Cycle World review of the XS650 described this very moment: “…the engine growls to life with a subdued roar, then settles into the loping gait of a large vertical twin, the sound of an even series of cylinder explosions separated by flashes of silence.” Yep. It’s neat. I rode to a gravel lot to see what the ol’ bike felt like when tossed around and revved to the moon. Bombing frigid puddles with throttle pinned and tires spinning, the powerplant proved it had umption in its gumption. Mission: Donor Motor…accomplished. 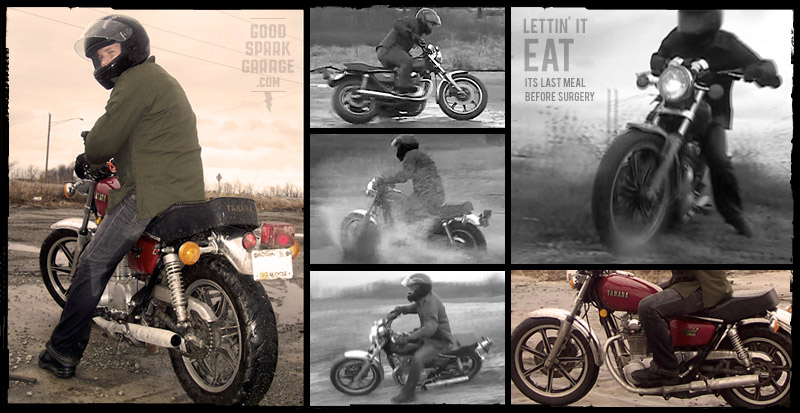 For folks that prefer moto-preservation, this is the end. The soul of this XS will live on though, we’re just giving it a new pair a’ shoes. Now, for those who dig hardtailed hooligan bobs and chops…we’ve only just begun. The donor bike is now in the hands of the Ardcore crew. While there, we saw the new bones of the Flying W; an existing roller awaited. It was clear that we were in good hands after seeing the clean welds and one-of-a-kind frame. 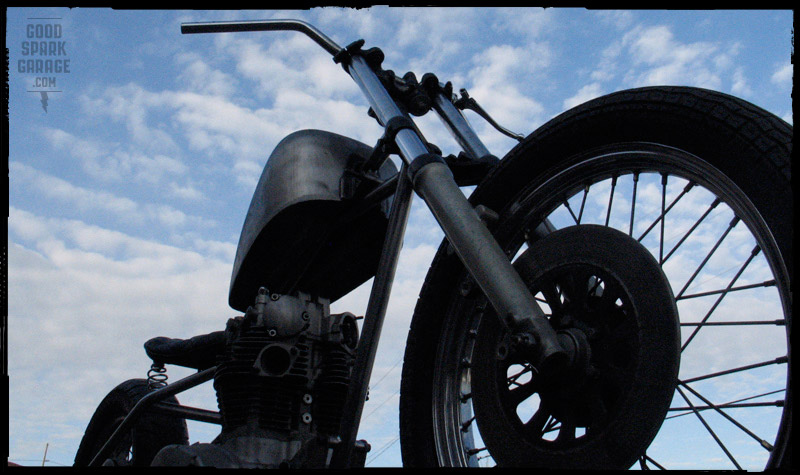 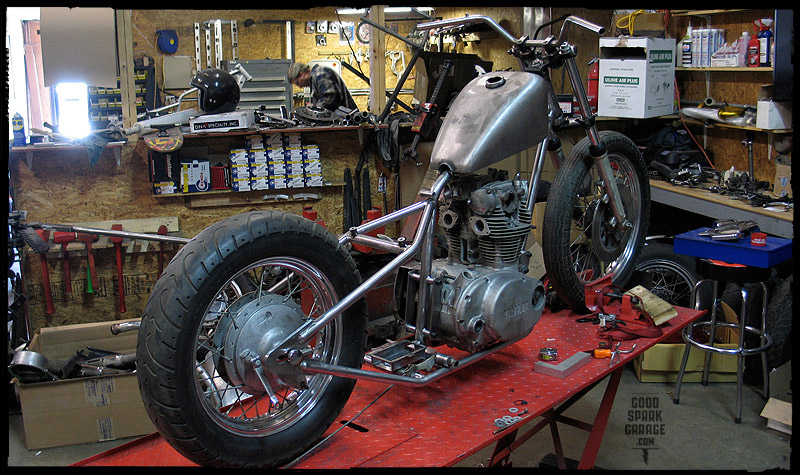 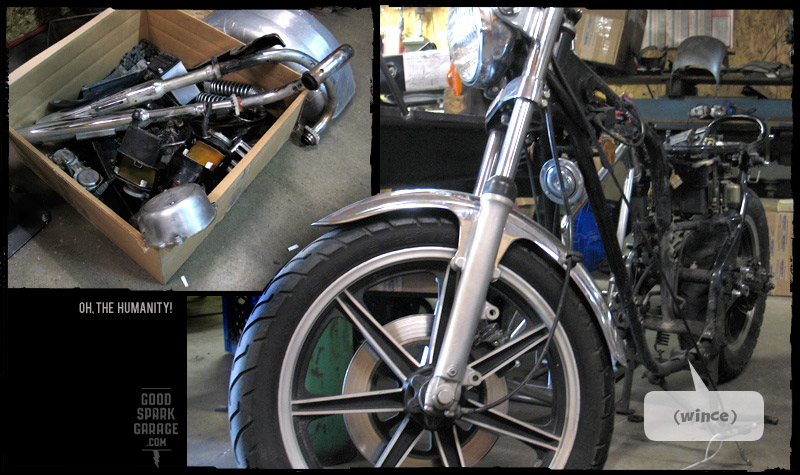 Alright, we’ve now got a motor and roller wanting to be united. So what’s this thing going to look like? Too many choices. Too many things we wanna try. We started with these basics:
1. Gloss black frame
2. Stock XS rims, gloss black
3. Old school tires (Classic Shinko rear and Speedmaster front)
4. Silver and black tins (man, did THIS change)
5. Low bars
6. Mids! 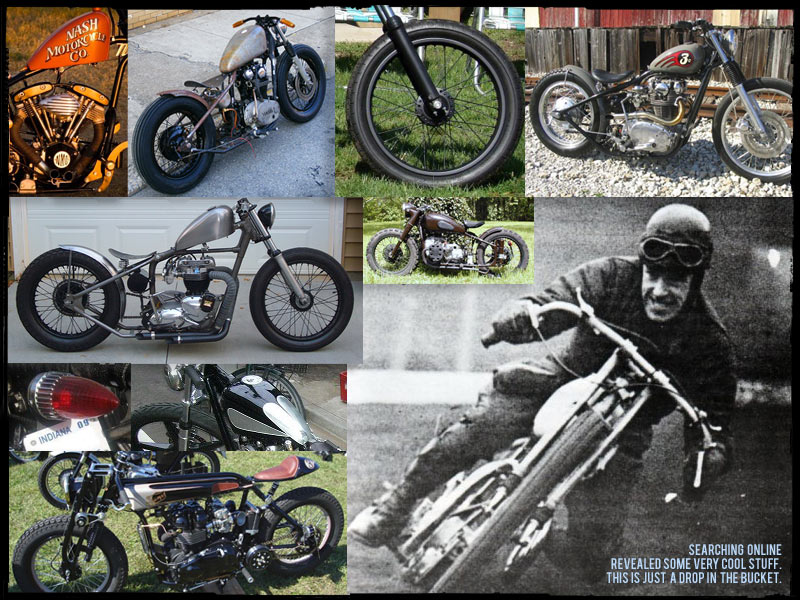 We studied what people are doing these days (from the ex-skateboarders to garage builders to chopper corporations) and what the chopfathers did, years before our time. It was a great crash course in chopperdom.

The choice of paint style was our biggest hurdle, maybe because we’re graphic designers/illustrators. A conversation with Nate was in order. He’s Ardcore’s painter (known as “sure” to forum folk). Nate plopped down the binder o’ swatches and walked us thru the many color options and provided some schooling on candies vs. flakes and how they’re applied. He’s full bore into this painting thing; definitely has his finger on the pulse of what is different, authentic, and groovy.

We had to pick a color scheme; no more hemming and hawing. Silver and black fell by the wayside to a candied yellowy-gold and gloss black. Exclamatory. We then sketched and toiled over some simple-but-neato scallops, stripes, etc….changing our minds umpteens of times. But soon, the clouds opened up and the angels sang when we landed on a paneled theme with a fat black top-stripe. (Later, we’d benefit from Nate’s shoot-from-the-hip painting style when the tins made it to the booth; stay tuned.) 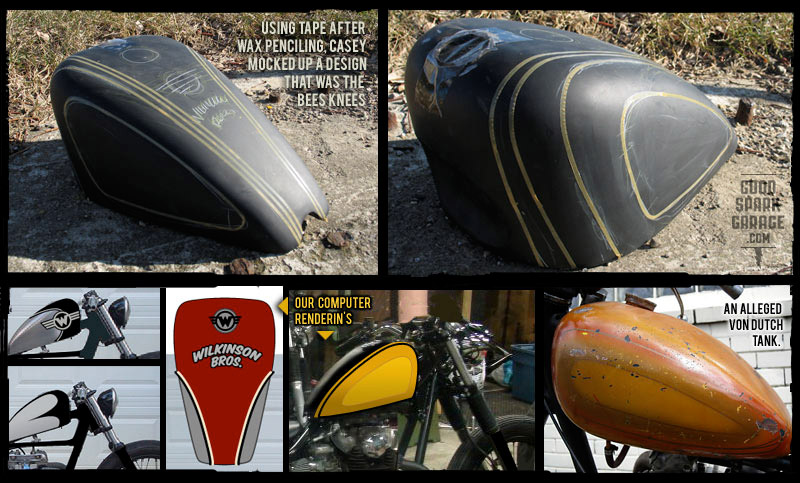 My brother and I each have families to feed and motorcycles to ride. So we’ve gotta keep our noses to the grindstone to keep the kids healthy and support our bike dependency. Lucky for the guys at the shop, that means we can’t be there to experience every step of the build (as much as we’d like to). We’ll try to be politely impatient while the hard parts come together and get gussied up. These goodies include Ardcore’s 9” diamond-stitch seat kit, the shortie Top Fools exhaust, and the clean n’ simple Model A taillight/license bracket. 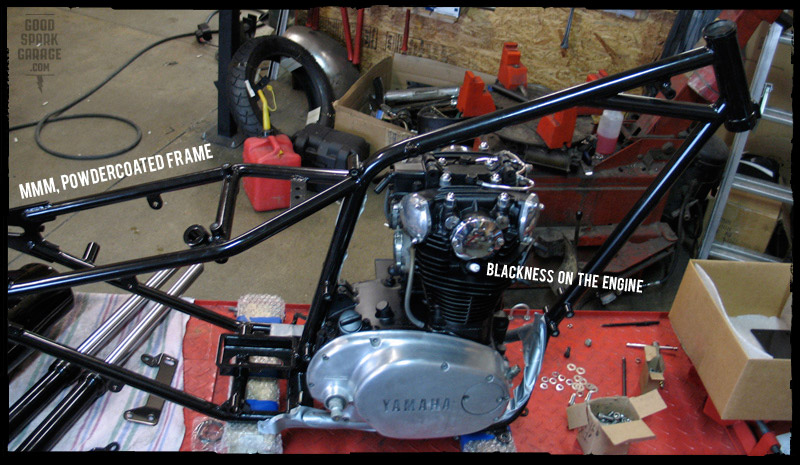 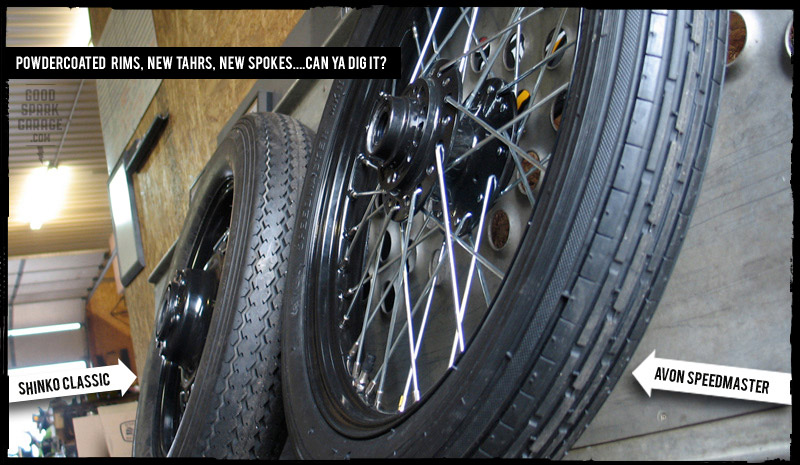 So while the metal things get situated, we visited Nate’s paint shop for almost the entire process of painting the tins. If you appreciate custom painters for what they do and can recognize their value, well, good onya. If you’re skeptical and uneasy with their cost estimates, it behooves you to witness such a tedious and methodical endeavor. 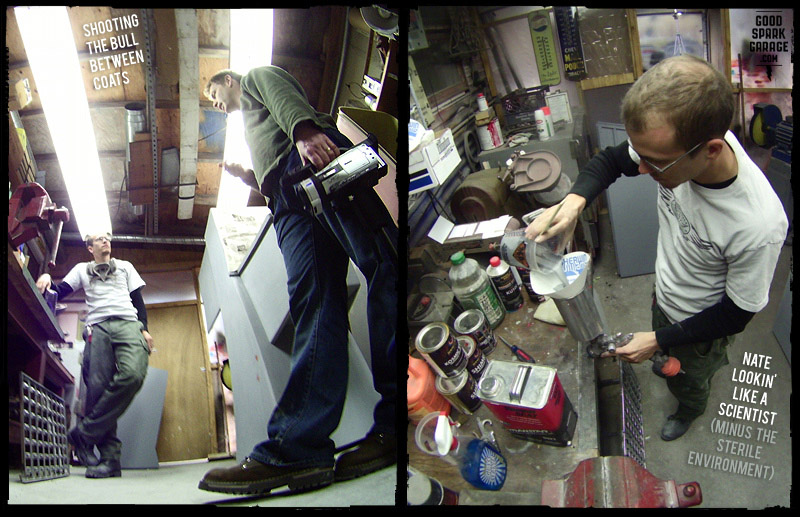 When we arrived, Nate had most of the sanding and smoothing done, part of the laborious paint prep that can’t be ignored. The House of Kolor cans soon emerged to fill an impressively crafted German spray gun. We watched him begin the first of many walks around each tin thru the night (Note: don’t expect this privilege from your painter; we were lucky). The rear fender, tank, and oil bag came screaming to life each step of the way. 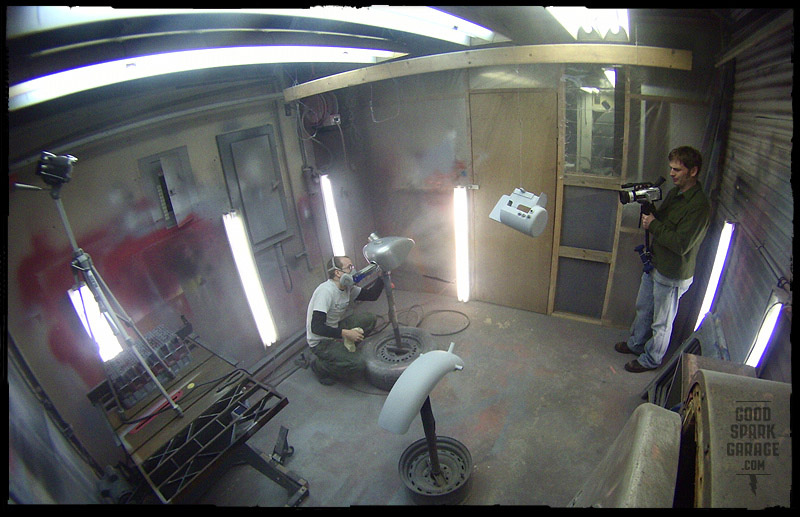 Nate provided some keen insight for the design; his experience and knowledge of varying styles helped enhance our early concepts. Laying down a silver Shimrin base coat and applying the wonderfully gold candy was cool enough, then he dropped a bit of a copper into the gold to create blends and fades that conjure up the good ol’ days. Far out, man.

Since this build is in the hands of others, we try to refrain from rushing the craftsmen. However, we can’t help but nudge and hint along the way, “Man, we’re reeeeally looking forward to riding that work of art!” While this is strategic flattery, we’re bein’ genuine when we say it’s art. What was a humble, do-gooder bike, is now becoming a lowbrow little punk…and we like that. In need of a visual update, we stopped by the shop to see how things were gonna mate up. 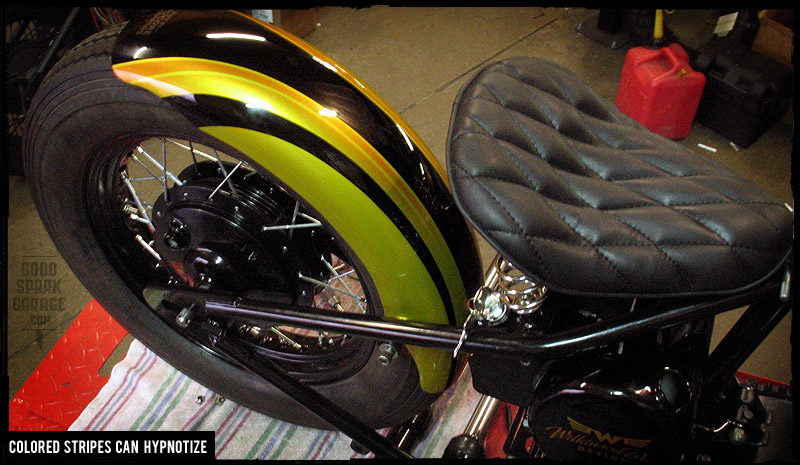 As we watched the big parts being tacked together, it was the first time we’d seen the bold golds near the black and metal of the frame and engine. We’re goin’ ape! Tank bolted, fender mounted, forks slid in, wheels put on, seat perched, pipes wrapped, and the oil bag in place, this initial assembly was the Flying W’s rite of passage. We’d shake our heads several times; all the black was the right decision. We concurred that the luminous funky stripes and panels were the proper exclamation point. Of course, this preview would only be a tease; much more has to be tweaked and fitted before the bike gets its first shot of petrol as a bobber. In the meantime, we’ll pace the floors of our office in agonizing anticipation. 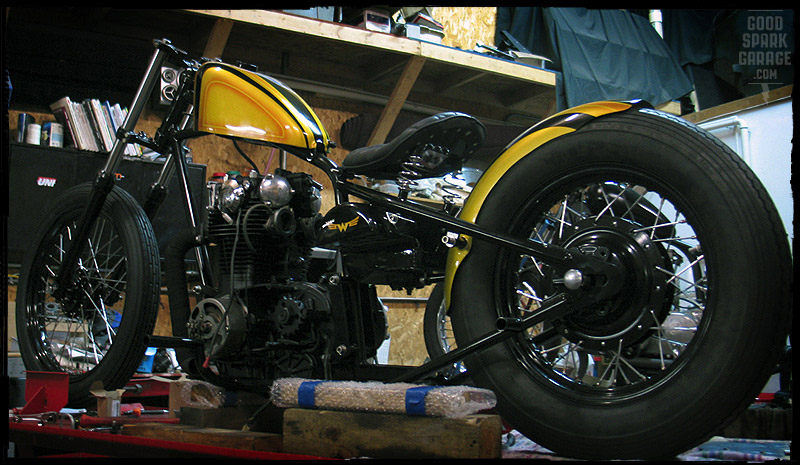 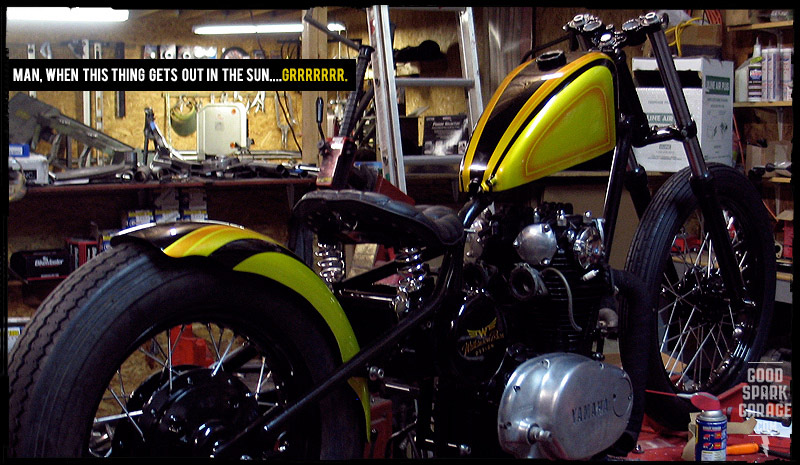 A necessary amount of days passed and we got a call from Jon Ard; he said the bike would be done by the end of the week. In its near-finished status, he predicted that we were gonna love it. Over the phone, I pre-agreed. We set a time to view the Flying W in all its assembled glory…and we would hold Jon to it. 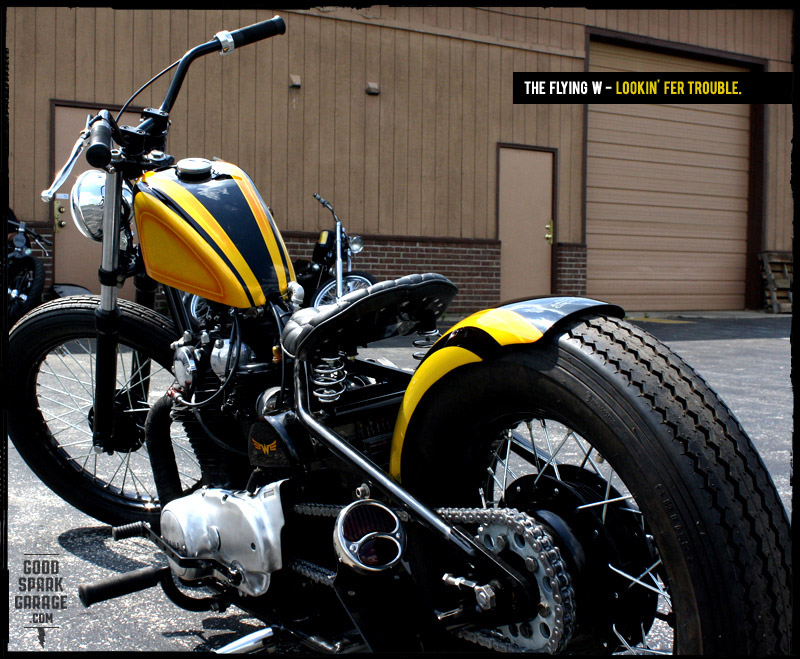 Friday is a good day to begin with, but this one was gonna be extry special. When we pulled up to Ardcore’s parking lot, a 3:30pm sun was cast upon our new bobber. Sweet. The stark black rims, tires, and frame held up the in-yer-face goldness of the tins. Looked like it was waitin’ for a fight. We saw, for the first time, the custom-fab’d brake arm, linkage, and shift-lever. And, at last, the TT-esque handlebars were mounted with basic black grips sans frills. Of course, the icing on the cake was hearing it pop to life and fall to an amplified, cackling idle. The proprietary Top Fools exhaust did their job and we’re sure they’ll cause the shirt-n-tie guys to believe we’re among the great unwashed. 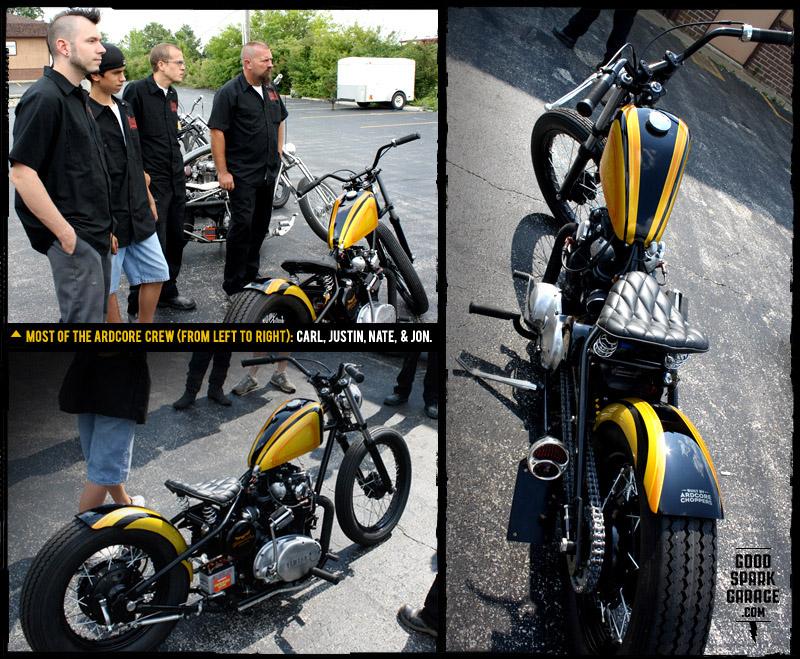 Helmet n’ gloves are donned after praise and admiration is given to the artisans at Ardcore; now it’s time to ride!! 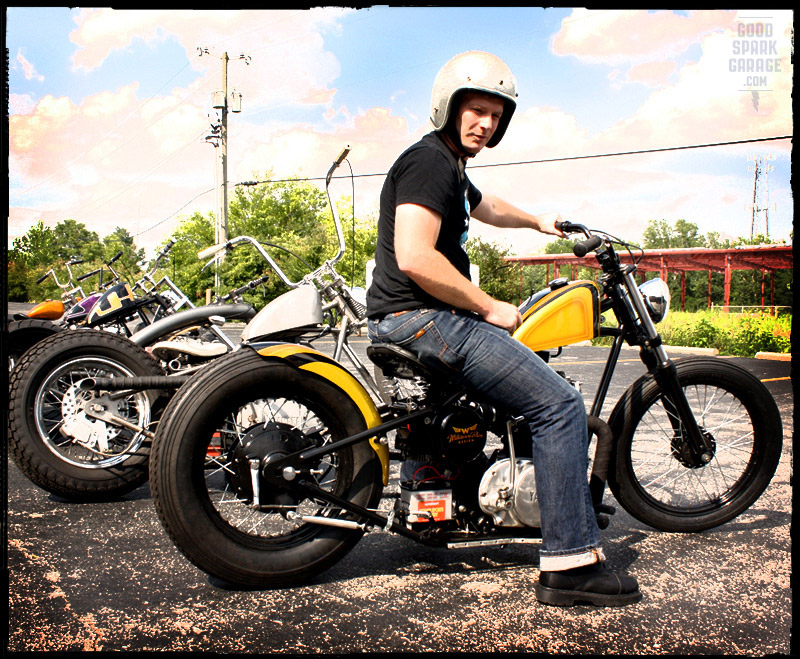 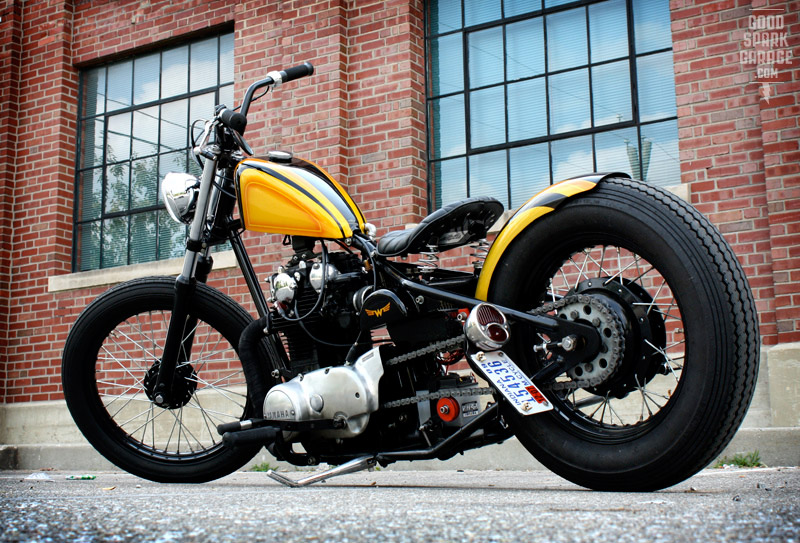 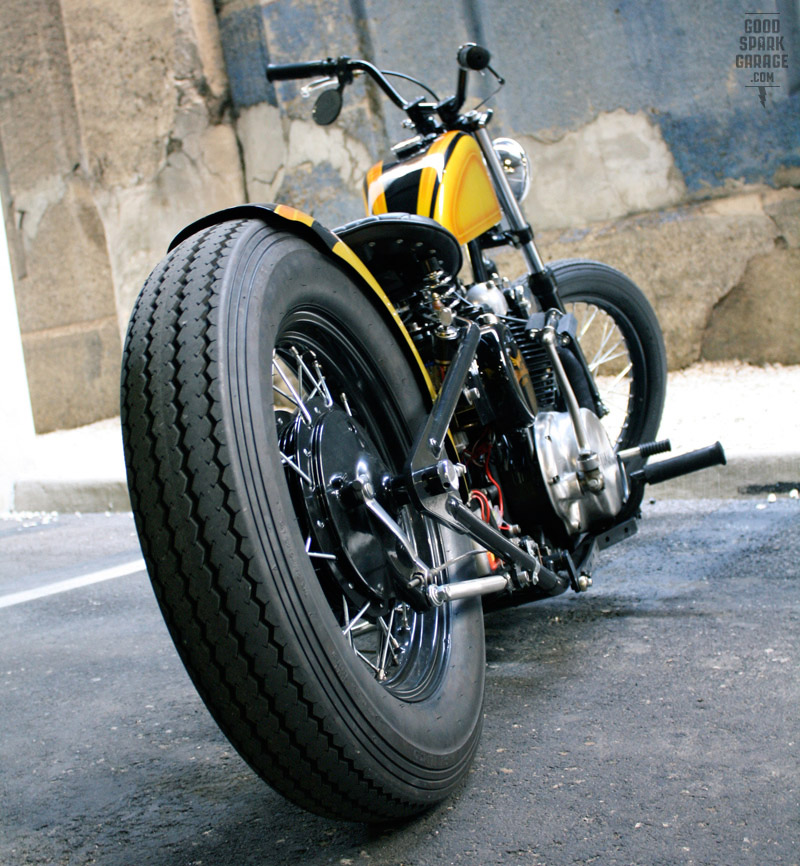 We’ve been talking way too long about making a video that shows this thing in action. Well, the time will come. Soon. So stay tuned… 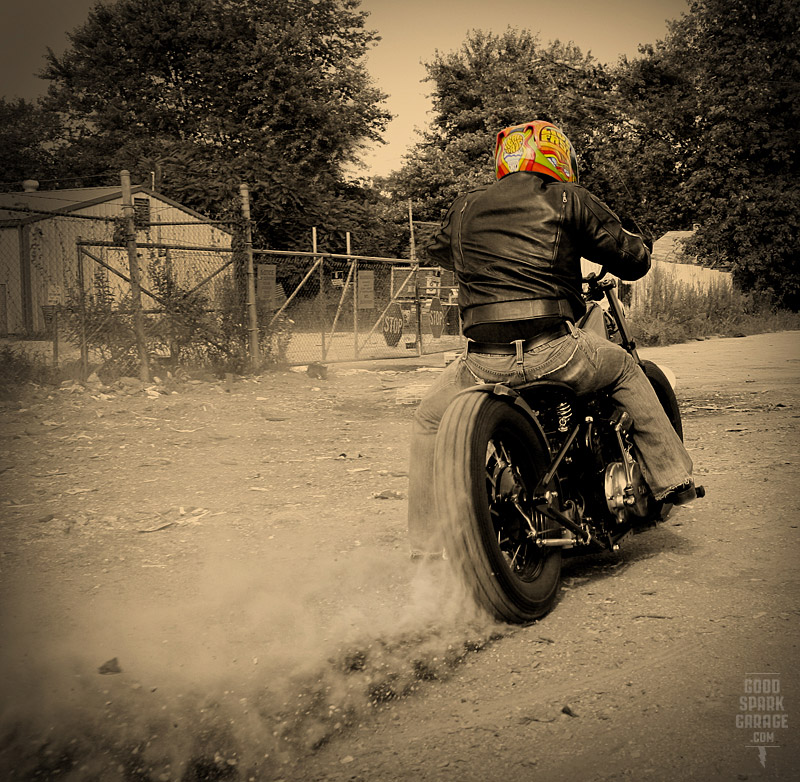