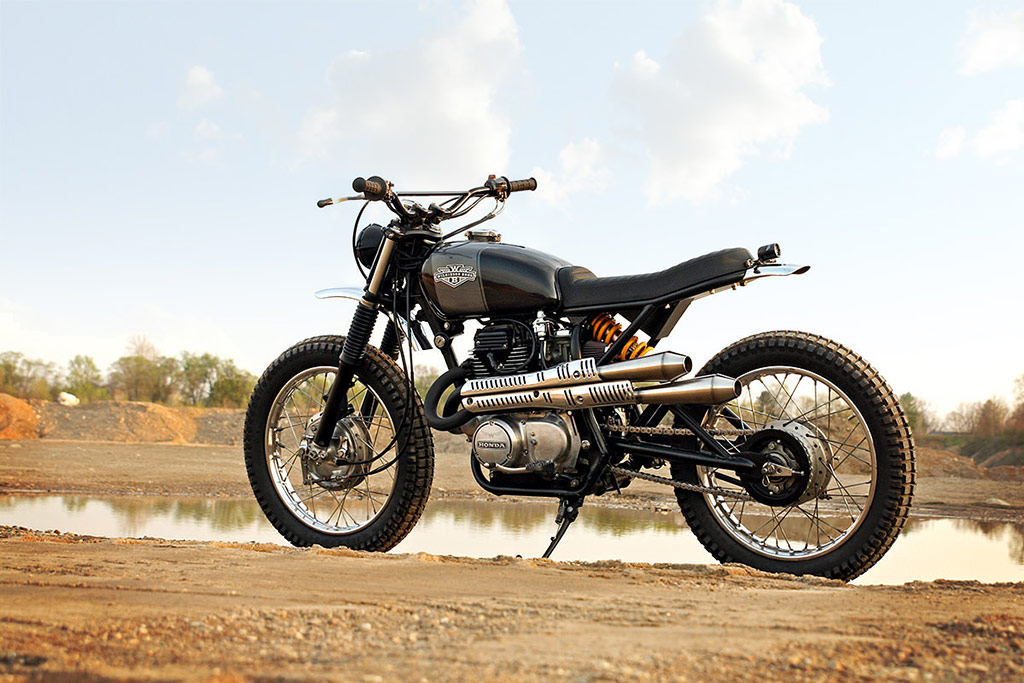 You might’ve seen our li’l Scrambler project featured on BikeEXIF.com or in the previous post showing our build photos. Here, we’re sharing some more “finished” pics and a few behind-the-scenes pics of the Wilkinson Bros Honda Scrambler CL360. 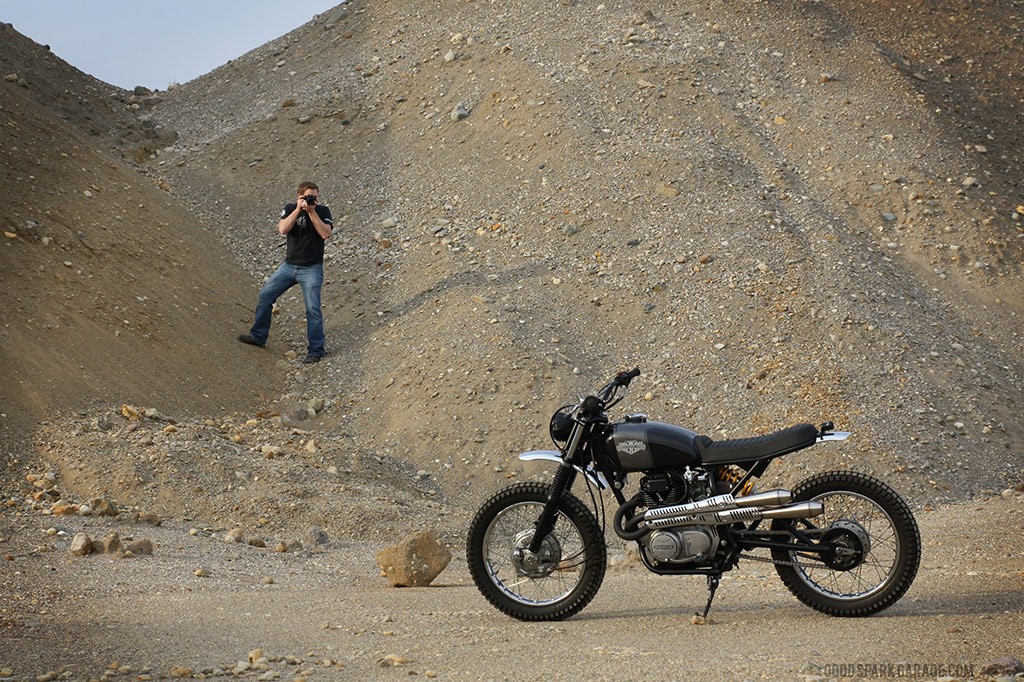 Our buddy, Steve Healey, is the owner of this bike. He commissioned the build and let us chase whatever direction we wanted to go. We didn’t deviate far from the original vibe of the 1975 Honda and, in the end, we all liked how the spirit of the scrambler remains. 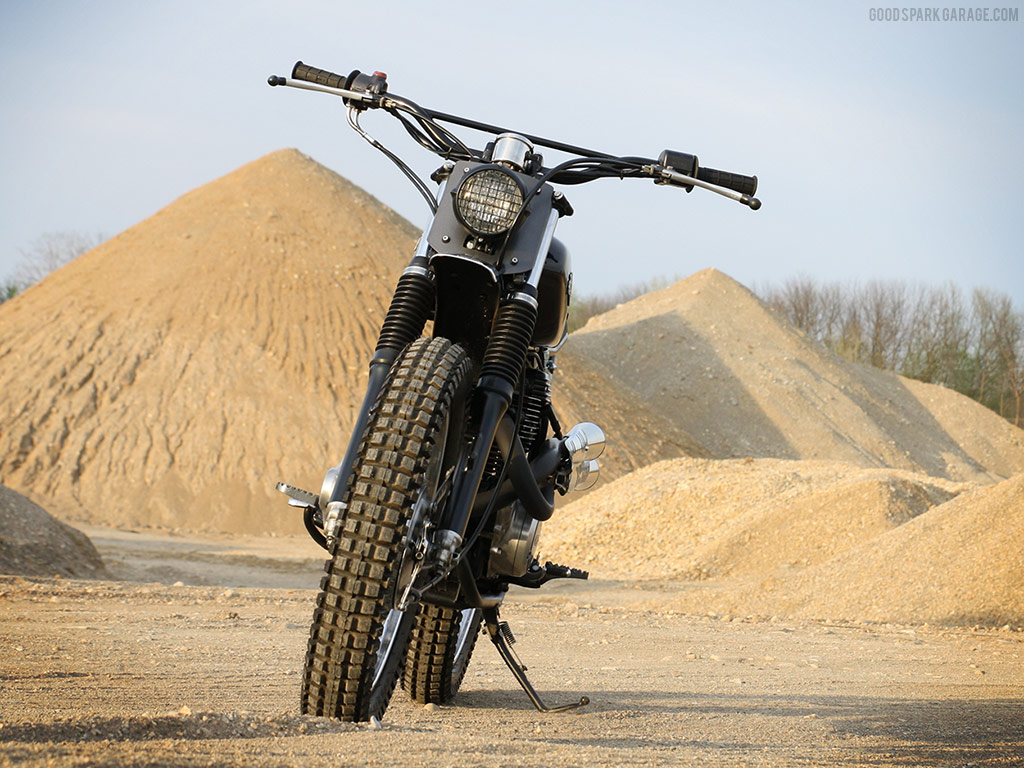 We found a gravel yard to stage the bike in its element; no sterile white infinity walls here. 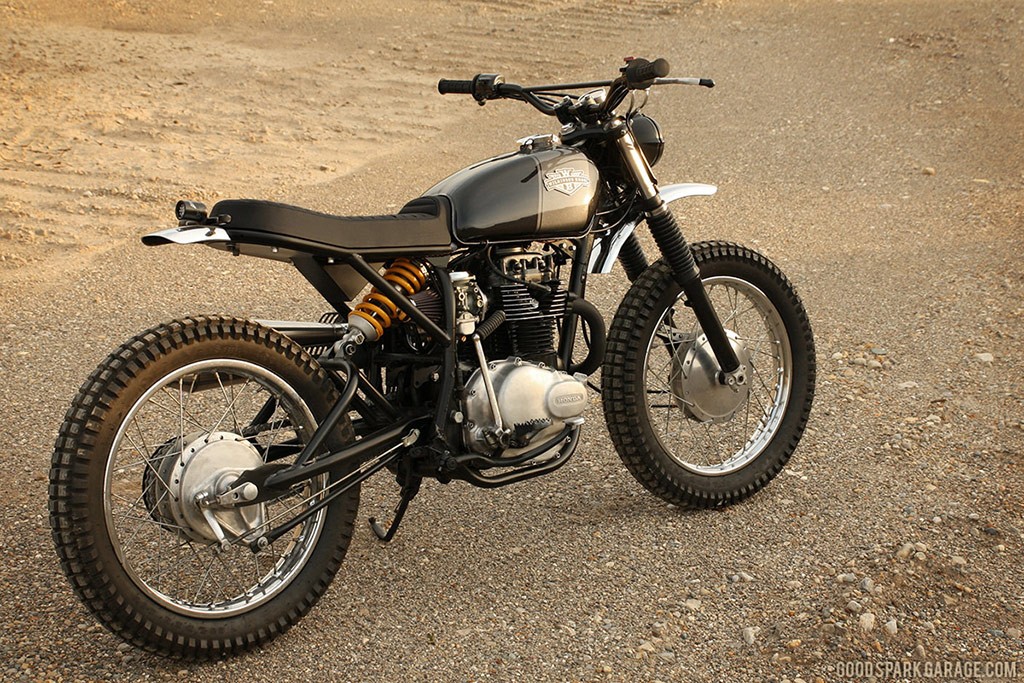 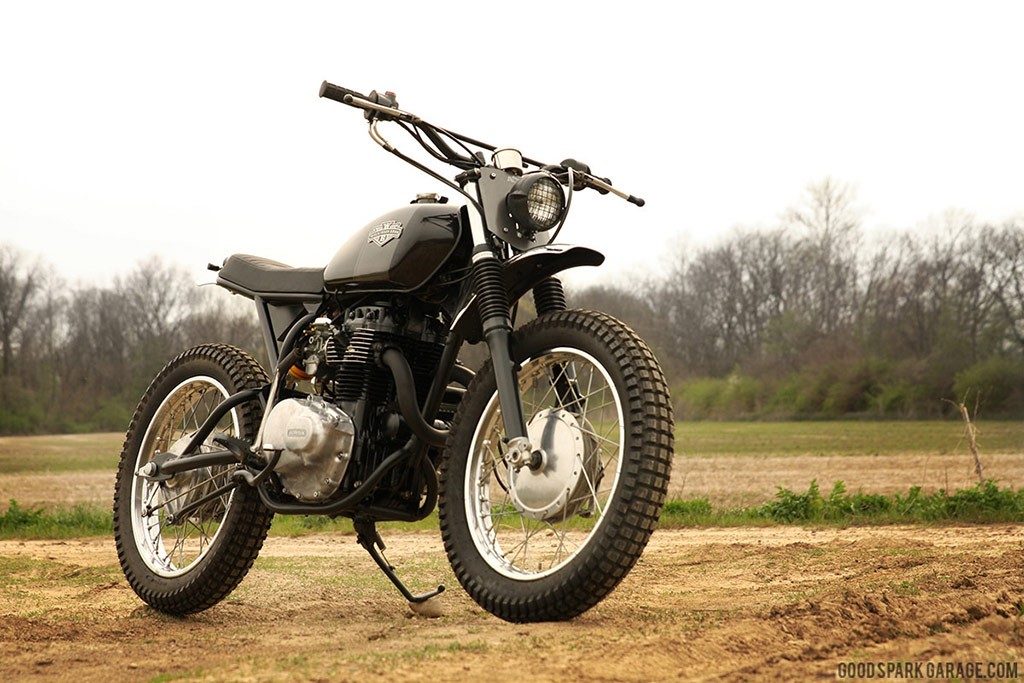 It was fun and fulfilling to have our hands on nearly every aspect of the build. We bent the tubing and fab’d up the new persona, most drastically changed by converting the ol’ bike to a mono-shock set-up. Casey welded up the new subframe and swingarm, connected by a shock from a Ducati Monster 620, and built the new seat pan to house the electrical necessities.

An LED brake light was inserted into an old Craftsman socket for a brake light, book-ended by two small turn signals. They sit just above the rear fender, which came from a portion of the existing front fender. Other details that kept this build simple, but appropriately adorned, are the dirtbike footpegs and vintage-style MX handlebars and grips. 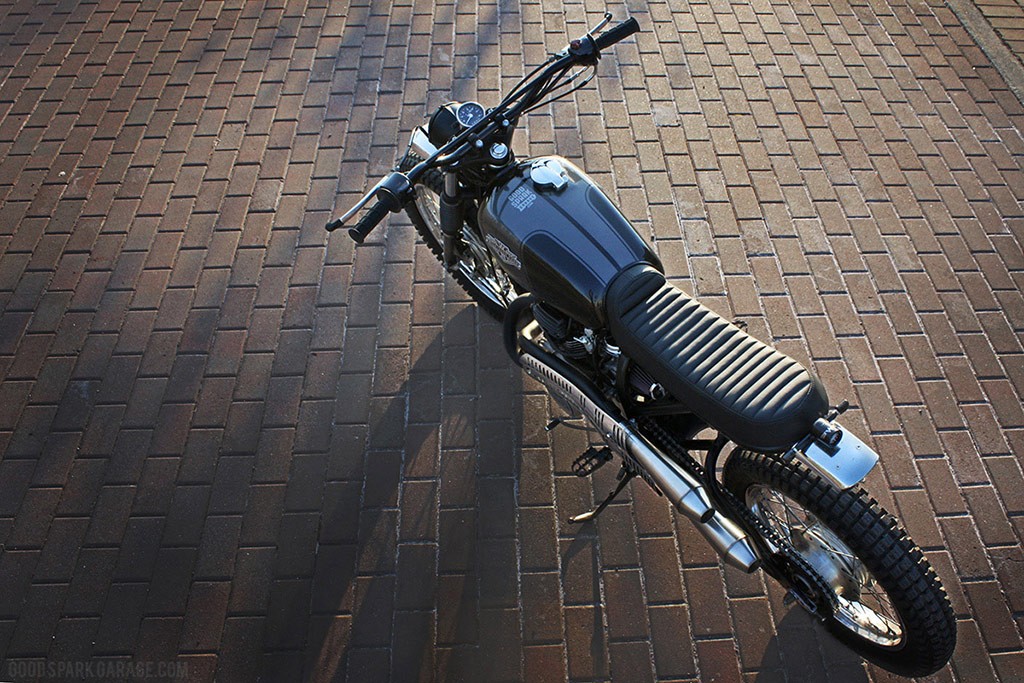 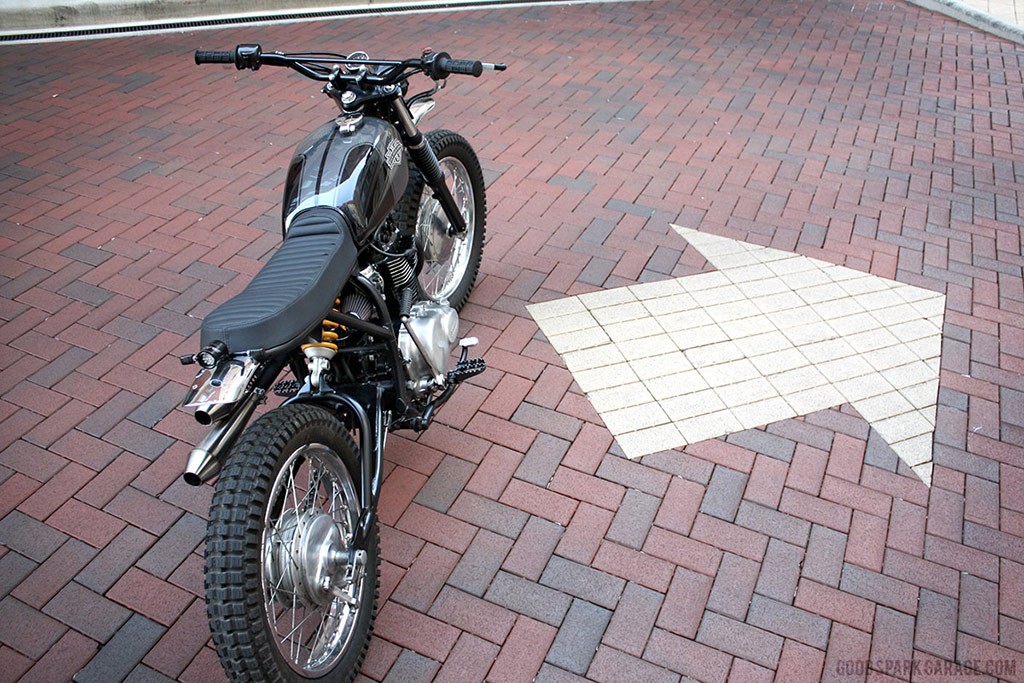 We pulled the engine, added new gaskets, plugged some things, fixed some things, added stainless bolts, brush-finished the cases and laid a satin coat of high-heat black paint on the top and bottom end. 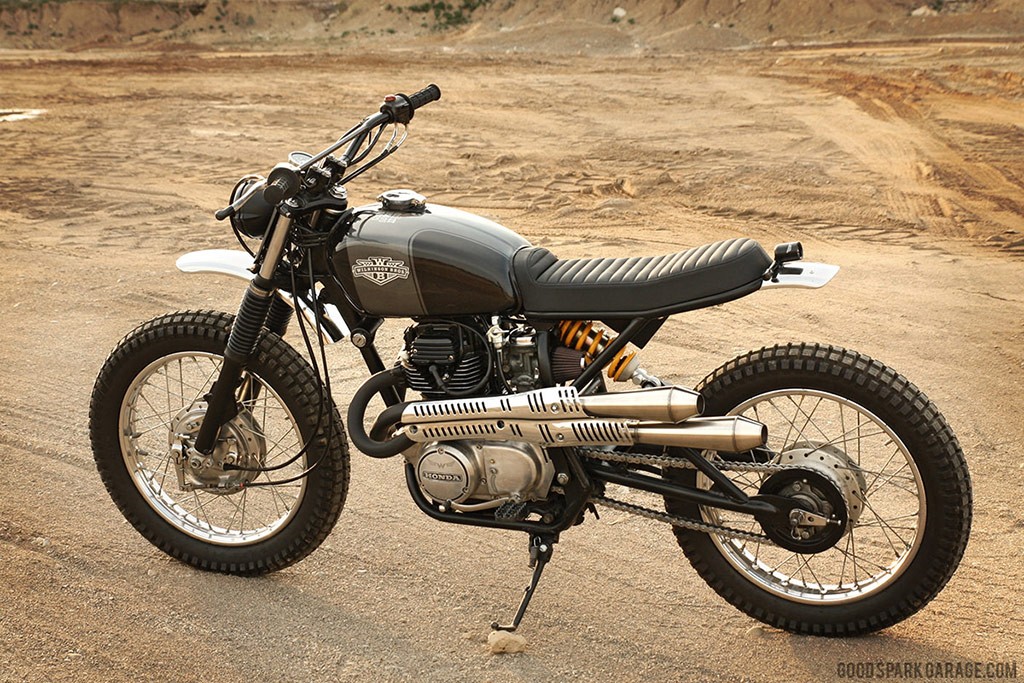 We wanted to keep most of the iconic heat shield, so we cut it to sync with the new Dime City Cycles “shorty” mufflers. The staggered cut compliments the staggered muffler formation.

After Casey laid out and taped off the design on the original tank, he leaned on his father-in-law, Allen Flick, to spray some healthy coats of metallic paint. We know when to call in qualified help when we need it! We also relied on local vintage motorcycle guru, Tim Duggan, to sort out the wiring. His knowledge far exceeds ours when it comes to making sure the electrics work! 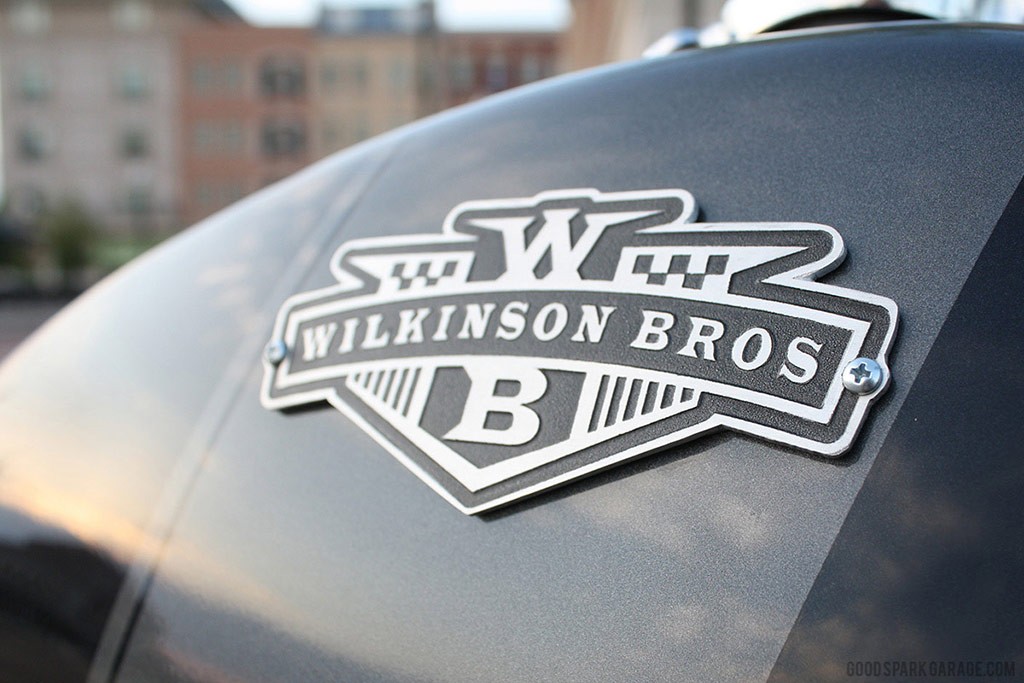 We sent our badge design (above) to TWT Motorcycle Parts to have them etched into aluminum. We painted the textured lower areas black, letting the surface remain exposed and smooth. After carving and shaping some thick marine foam for the seat, we sent it along with our custom seat pan to Kent Auto Upholstery for him to finalize and beautify. 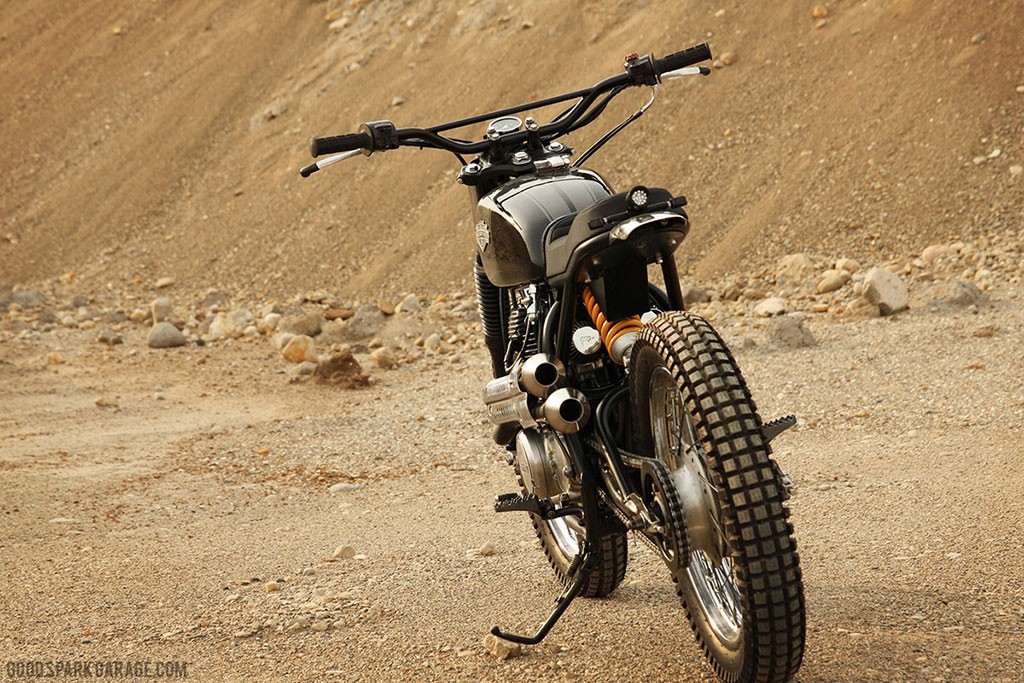 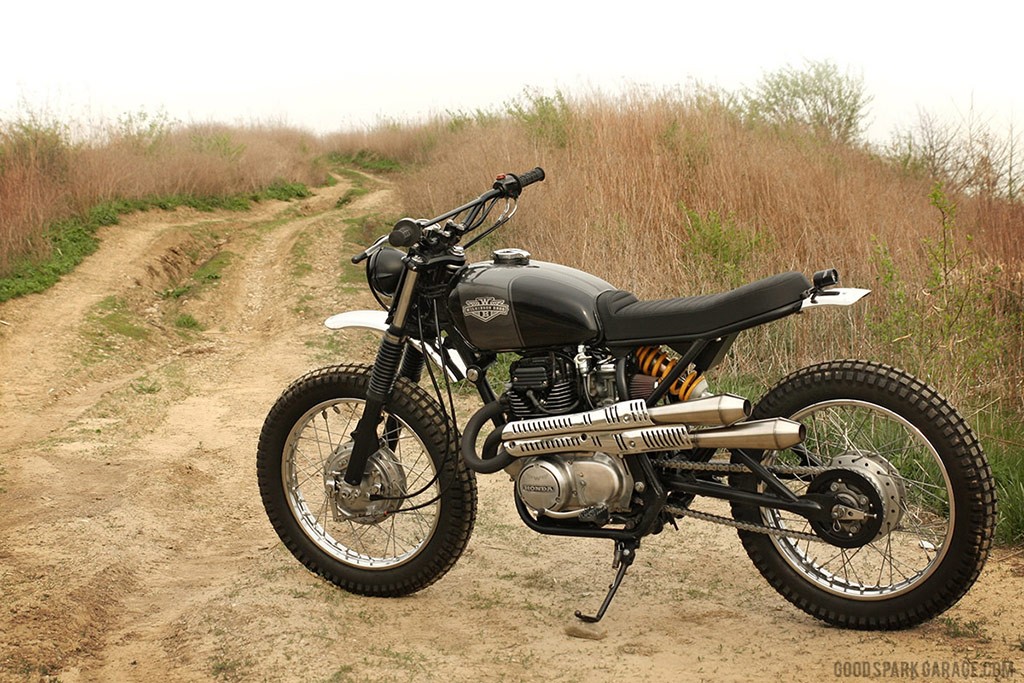 Several years ago, we met Steve and learned about the loss of his daughter to the rare childhood cancer, Neuroblastoma. For well over a decade, the Healey family has been working to raise funds toward research and to provide support for neuroblastoma families in need.

During her battle, Anna (pronounced Ah-nuh) was able to attend some of her fundraising events; one of which was a motorcycle ride. She sat on a corner, smiled and waved to every motorcyclist who showed up for her support. The ride would go on for years after she passed, financially supplementing the many efforts of the ANNA Fund.

Long conversations about life and motorcycles created a friendship that led to this special build for Steve. On the front plate, just above the headlight, are Anna’s initials. Excited to unveil the bike, we invited Steve to the shop having no idea of the day’s bigger significance; he told us it was Anna’s birthday. 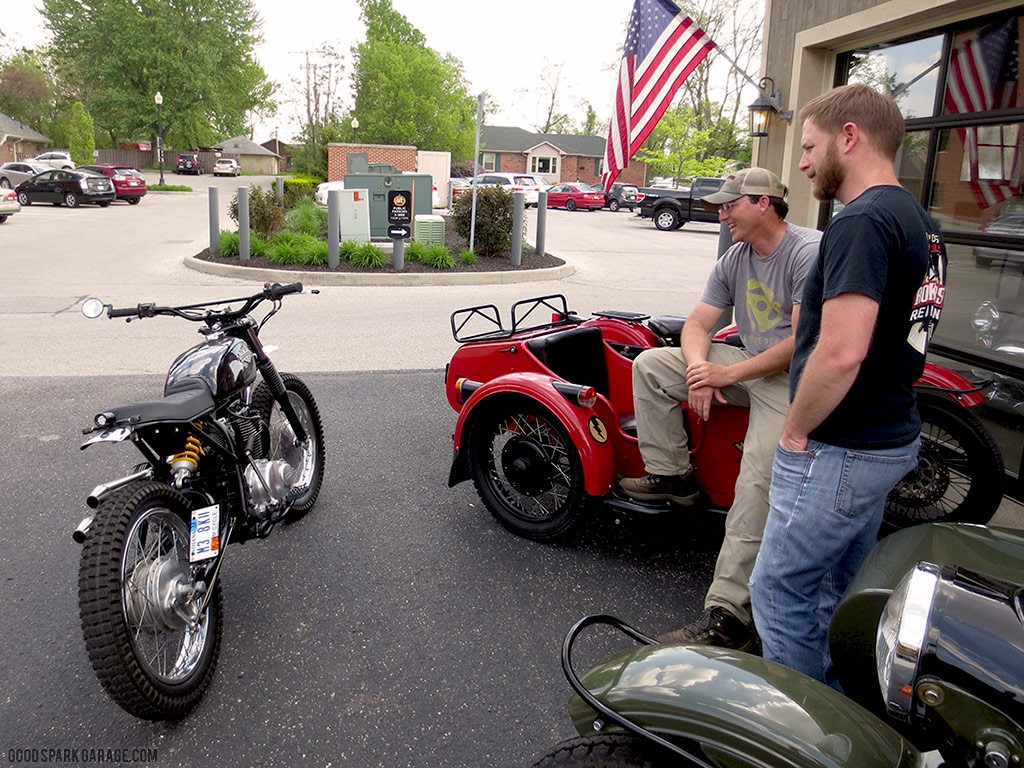 We imagined a girl in Heaven, smiling at how she helped make our paths cross with Steve and the fun that was had in her memory. 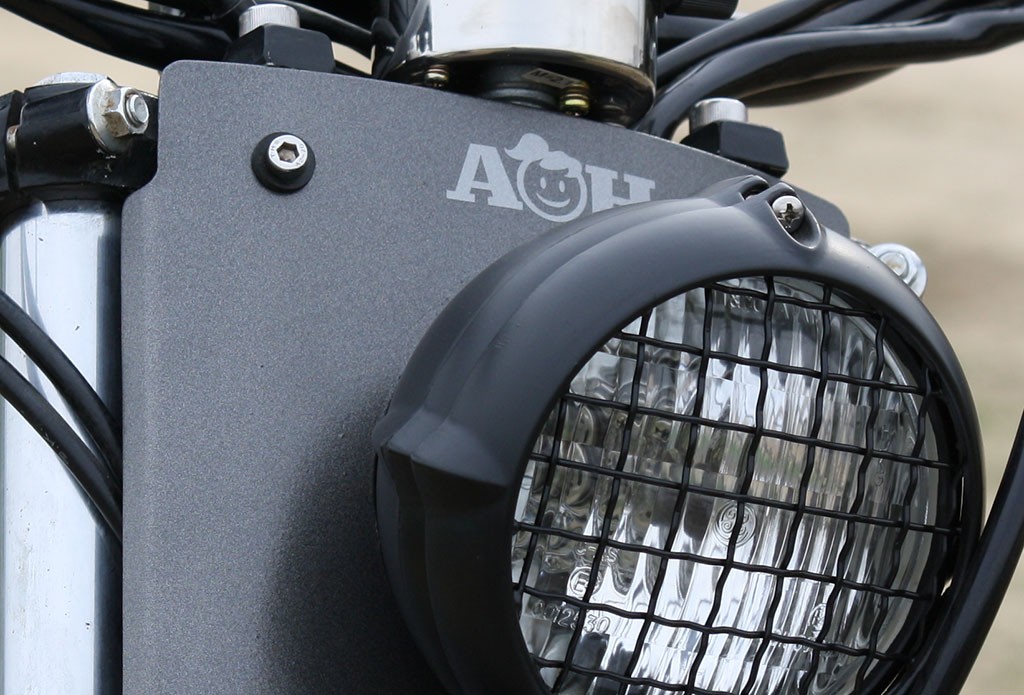