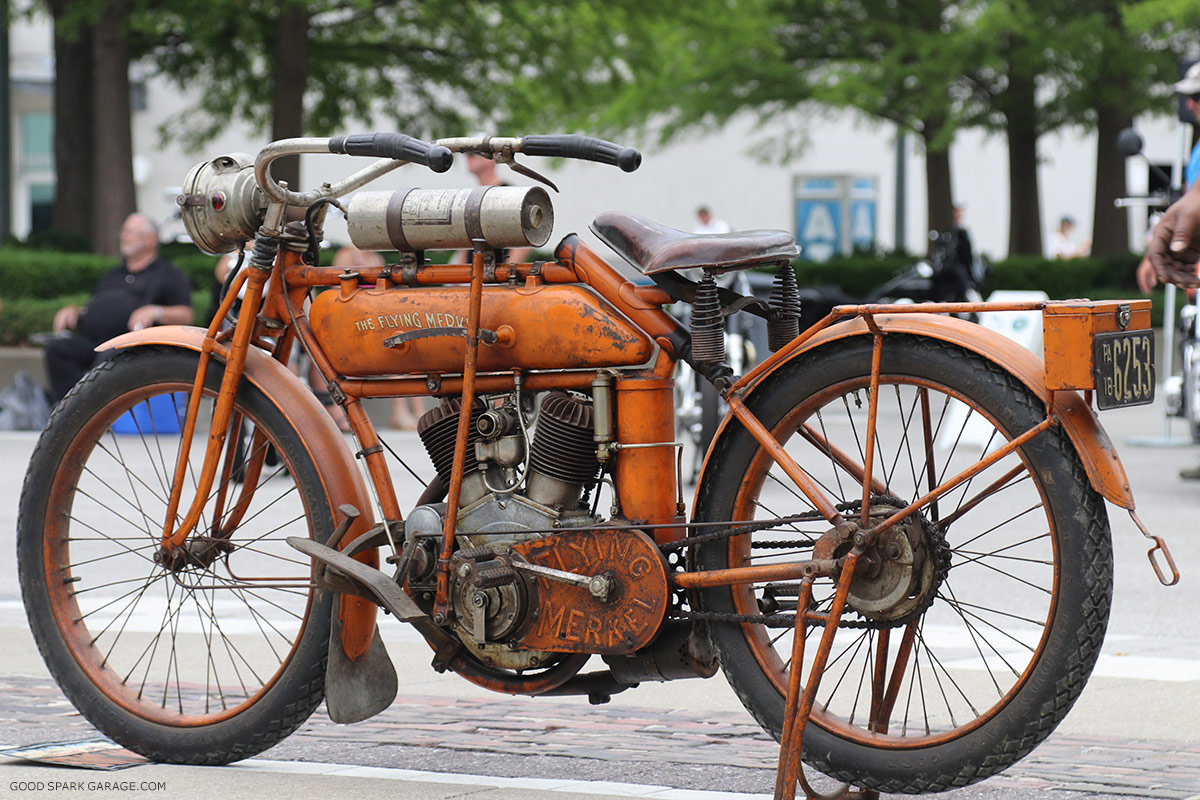 Walking right up to extremely valuable and rare machines is a treat. Place ’em in the middle of the speedway of speedways and it’s an awe-inspiring experience…especially when they’re fired up. Corey took his sons on a sidecar trip to the Indianapolis Motor Speedway during the SVRA Brickyard Vintage Racing Invitational followed by a ride through the town of Speedway, Indiana.

The town of Speedway is located within Indianapolis. In 1912, it was plotted out by the founders of the recently-built track (IMS) as a residential suburb to support the growing auto-related industries nearby. It’s about 5 miles from downtown Indy in what was then a blank canvas of flat farmland.

Of course, we’re always looking for the motorcycles in the crowd. While the SVRA Brickyard Vintage Racing Invitational touts hundreds of the world’s finest and most historic racecars (many pics to follow below), we heard there’d be a sprinkling of rare bikes on display. 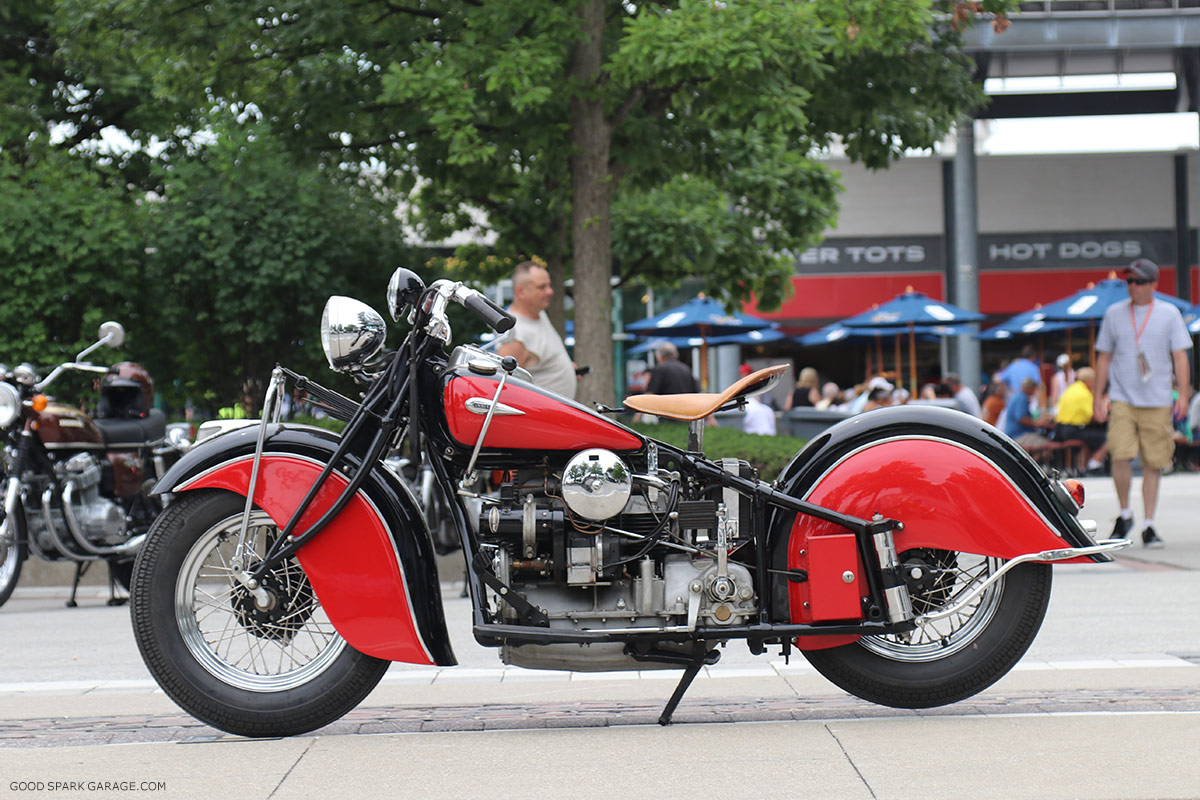 From restored classics to weathered originals, we saw some beauties parked out on the plaza in the shadow of the iconic Pagoda. 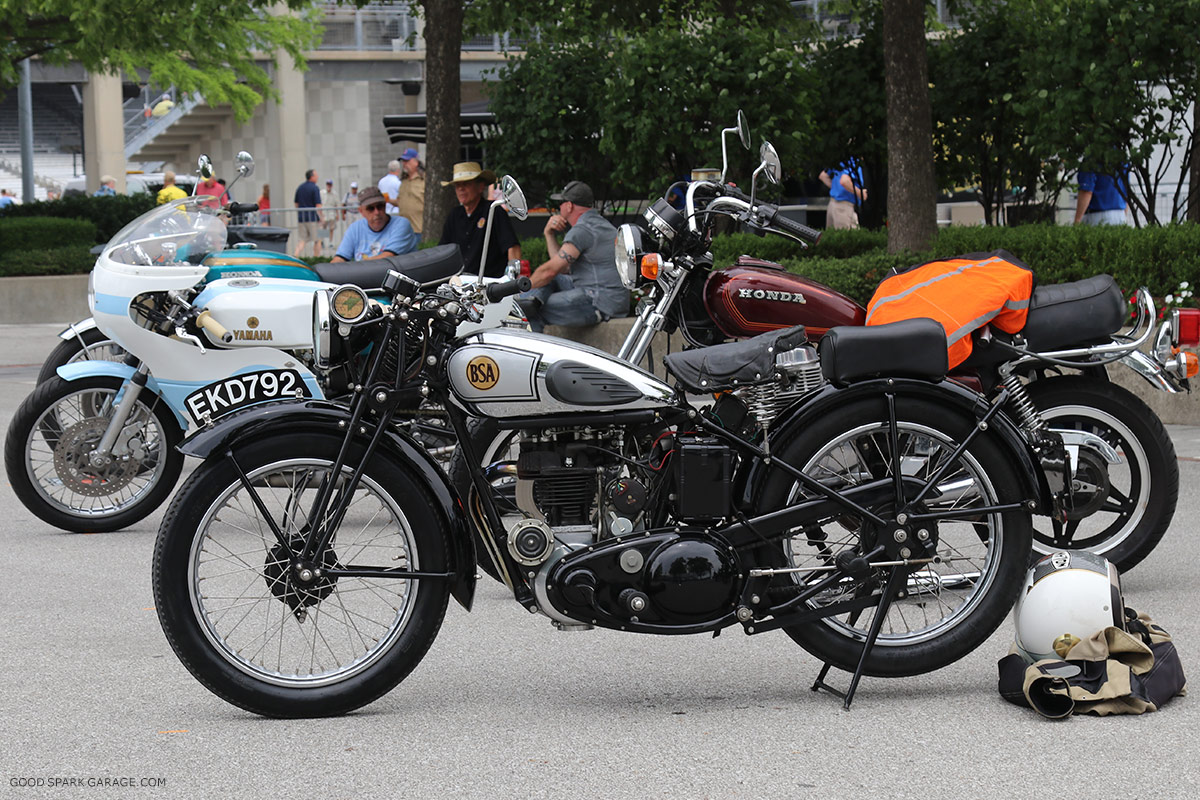 We’ve always been fans of seeing all the metal workings of motorcycles, unhidden by plastic or fiberglass. So many incredible details on these works of art. 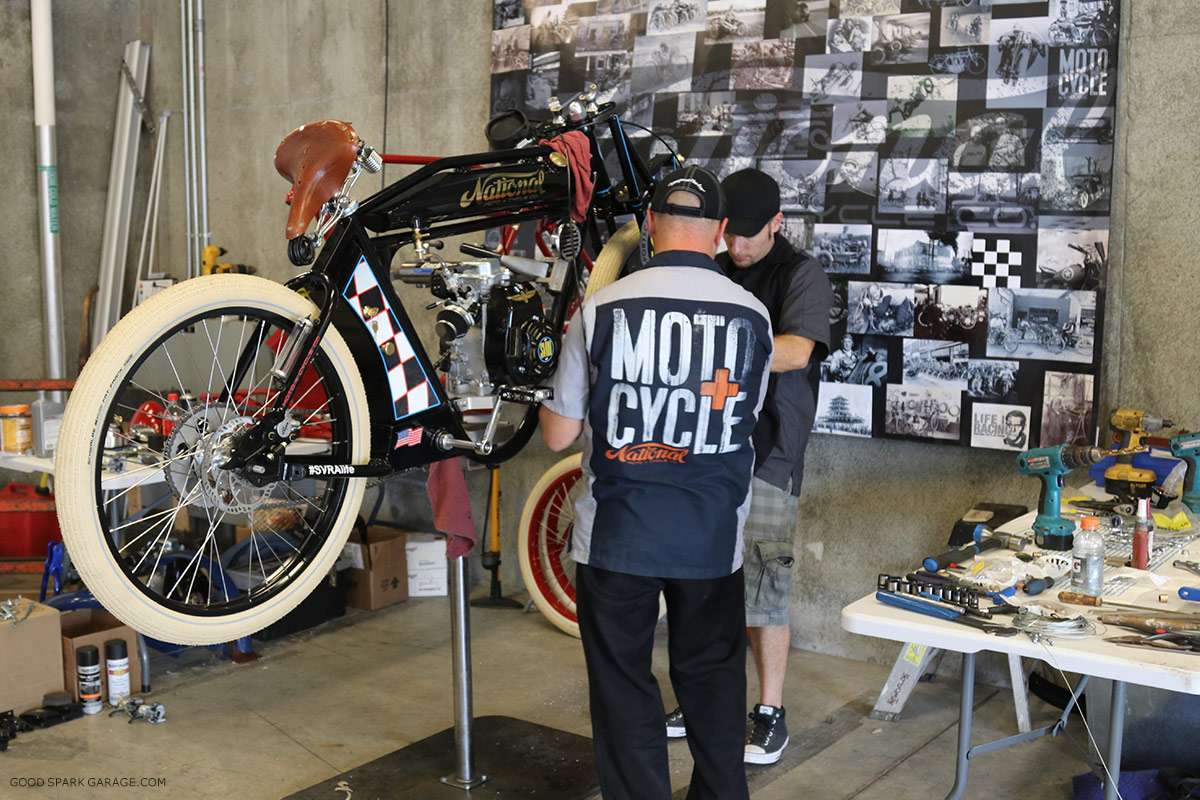 The guys from National Moto were present, wrenching on and riding their “Time Machine,” a modern nod to the beginning years of motorcycling. These beautiful bikes are built and assembled in the USA. 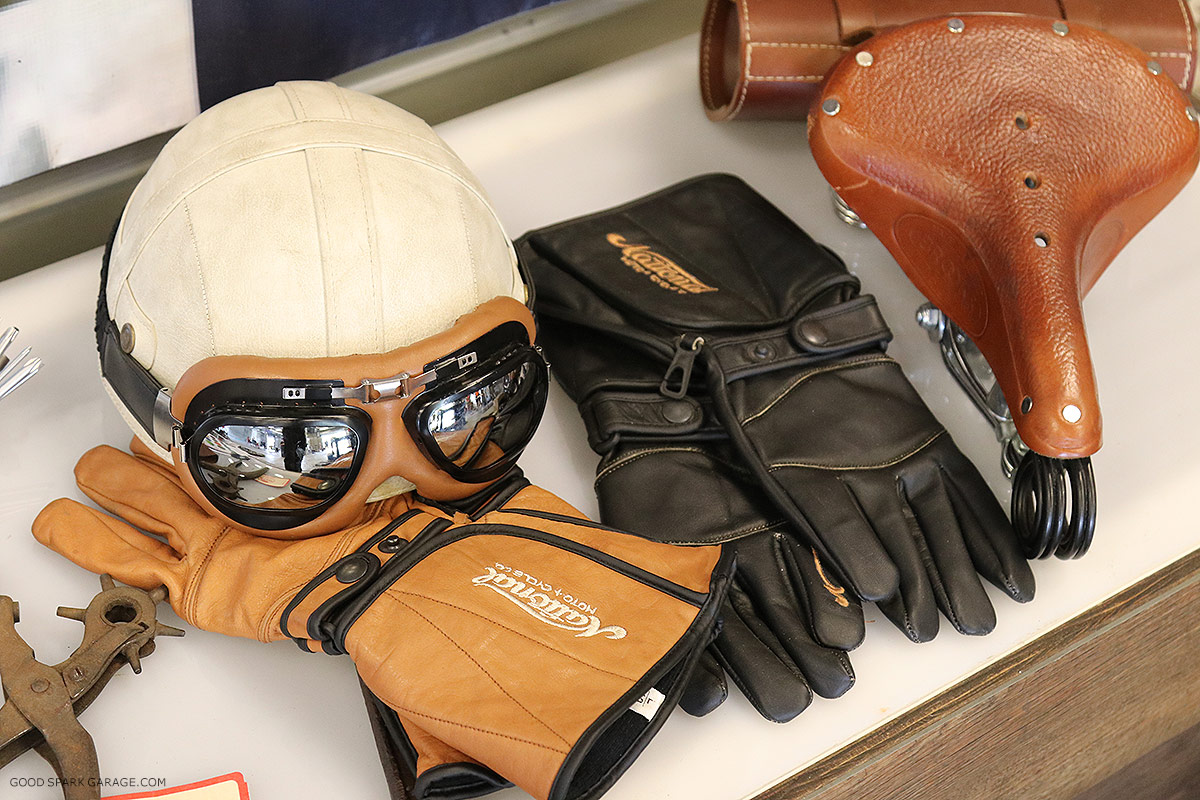 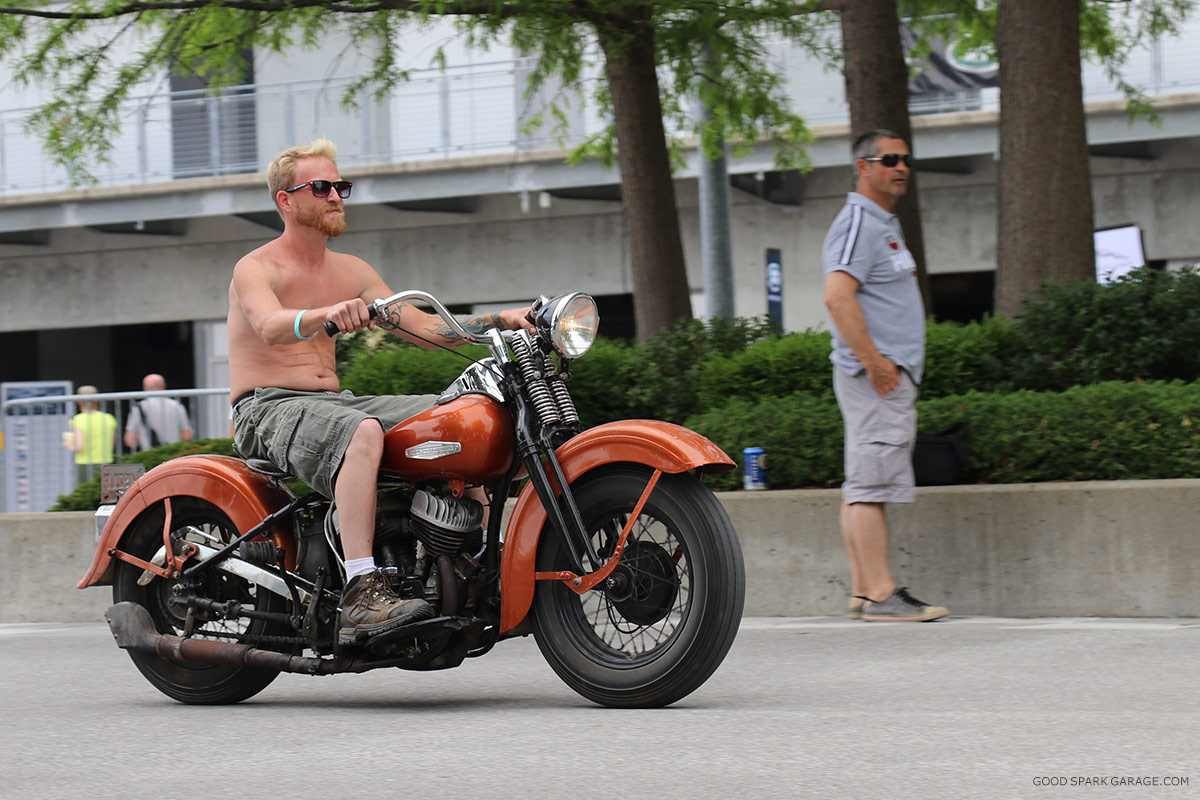 It’s an interesting atmosphere here, where motorcycle and auto gearheads coexist. No one recoils in disgust at loud revs, noisy exhausts or stinky fumes. That stuff is welcomed here. 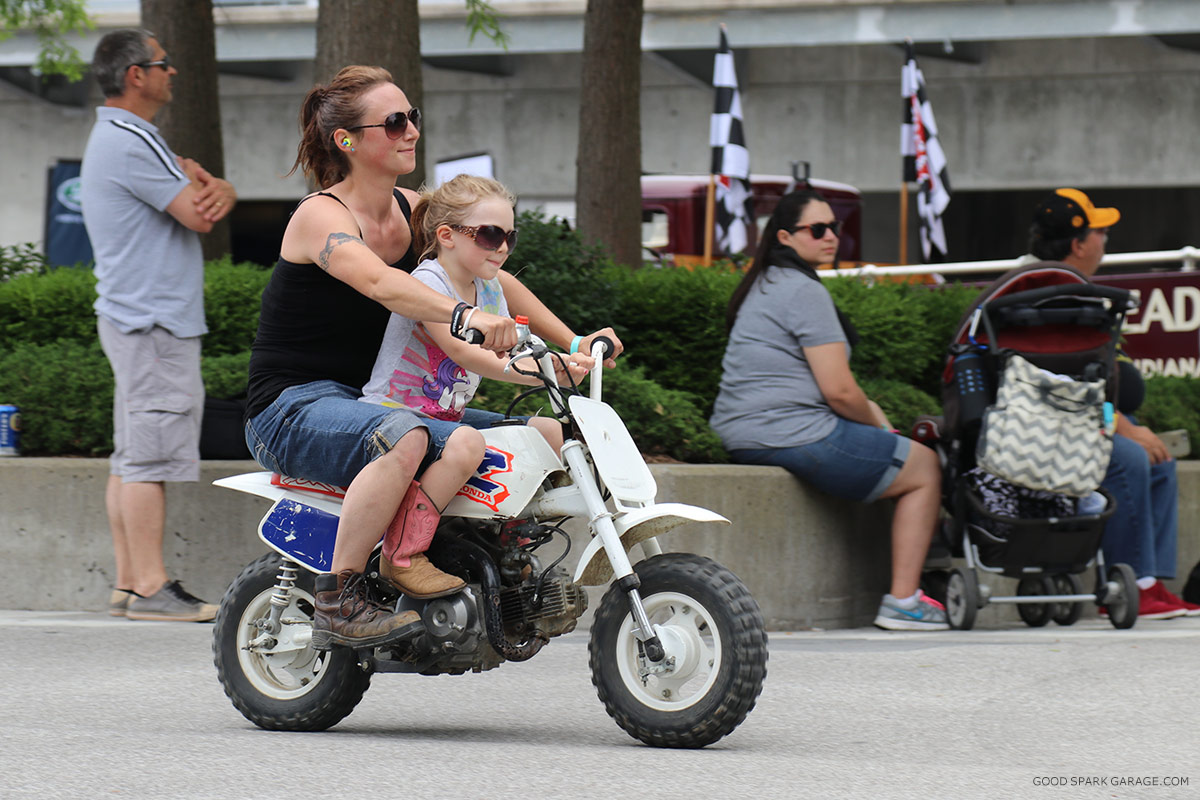 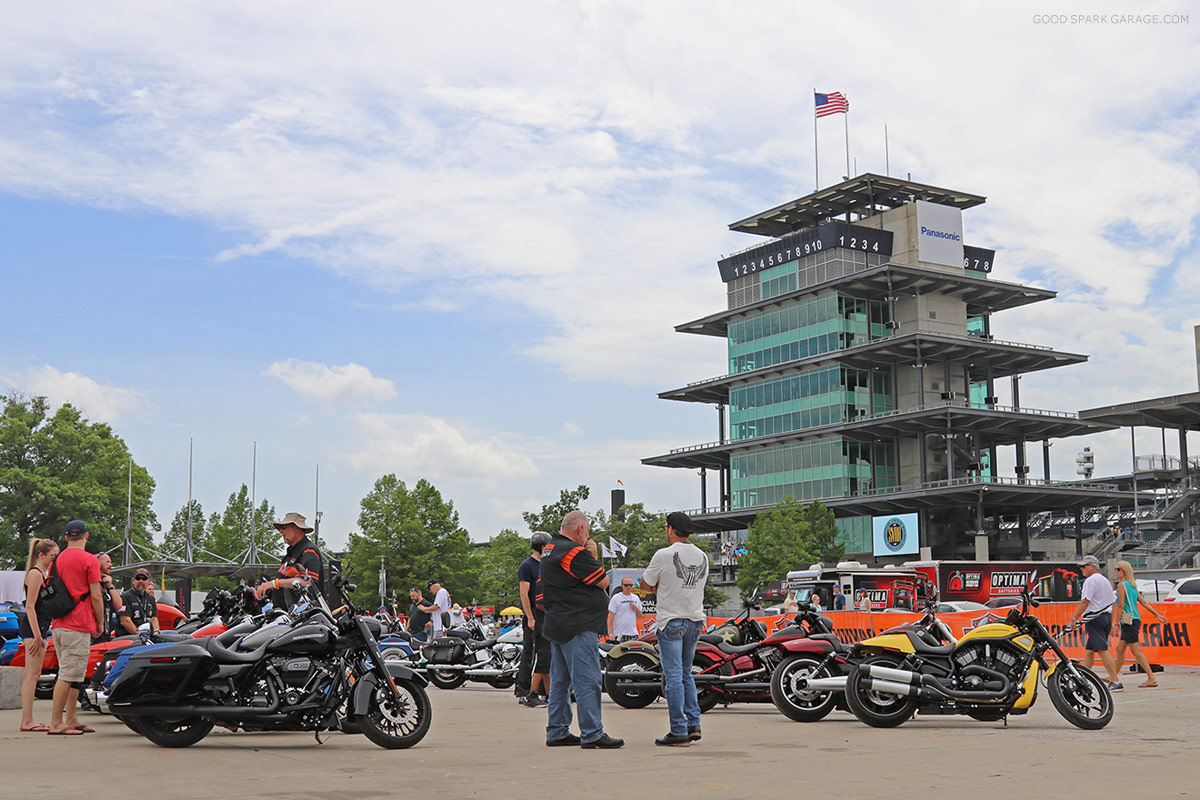 There were many Harley-Davidsons on hand if you wanted to demo a new model. Not a shabby locale for a quick spin on some American iron. 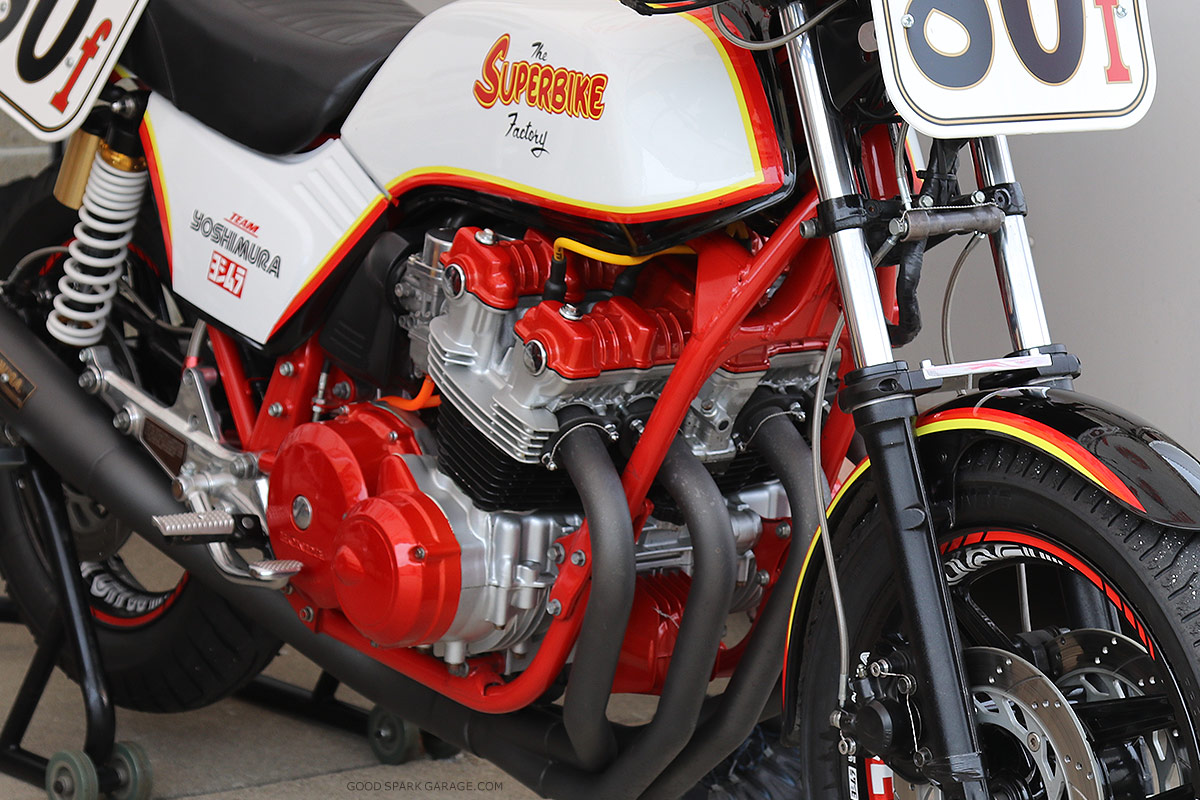 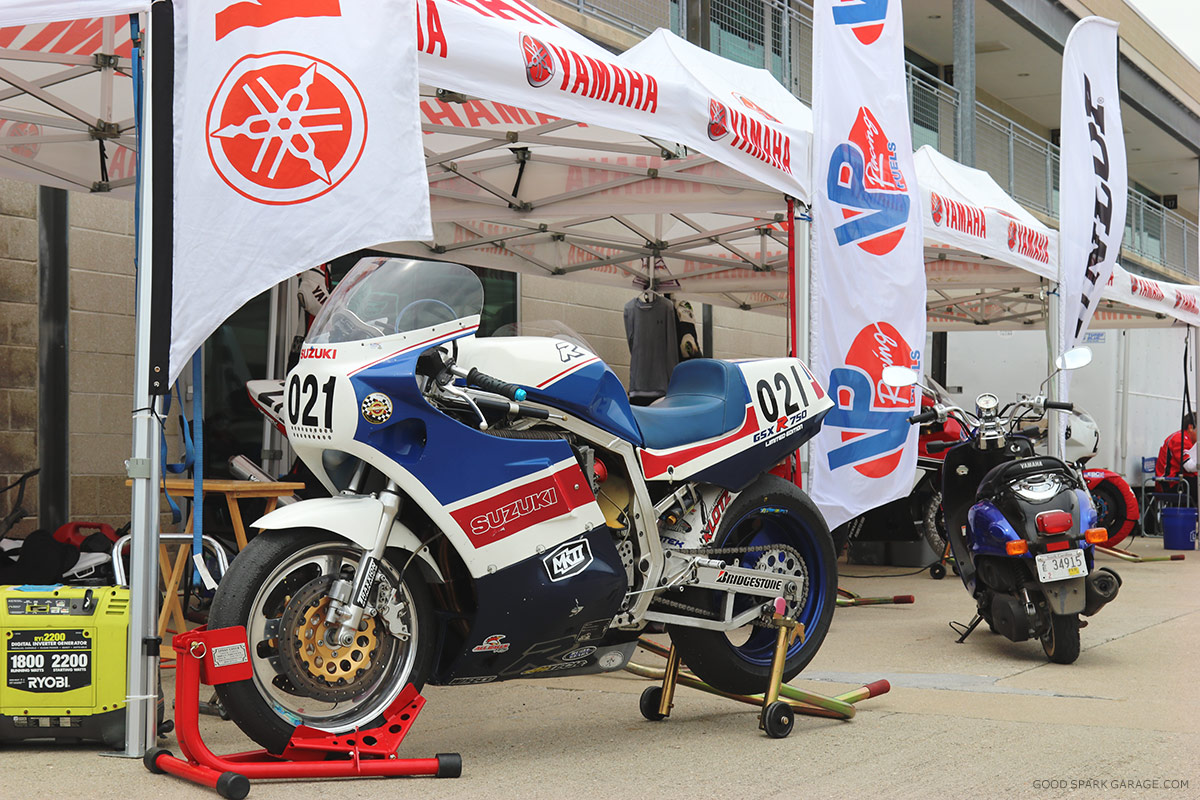 Some bikes took to the track, but it was mostly racecars that filled the brickyard with the wonderful sounds of yesteryear. That was worth the price of admission alone, hearing the echoes of varying engines inside the asphalt and steel setting. 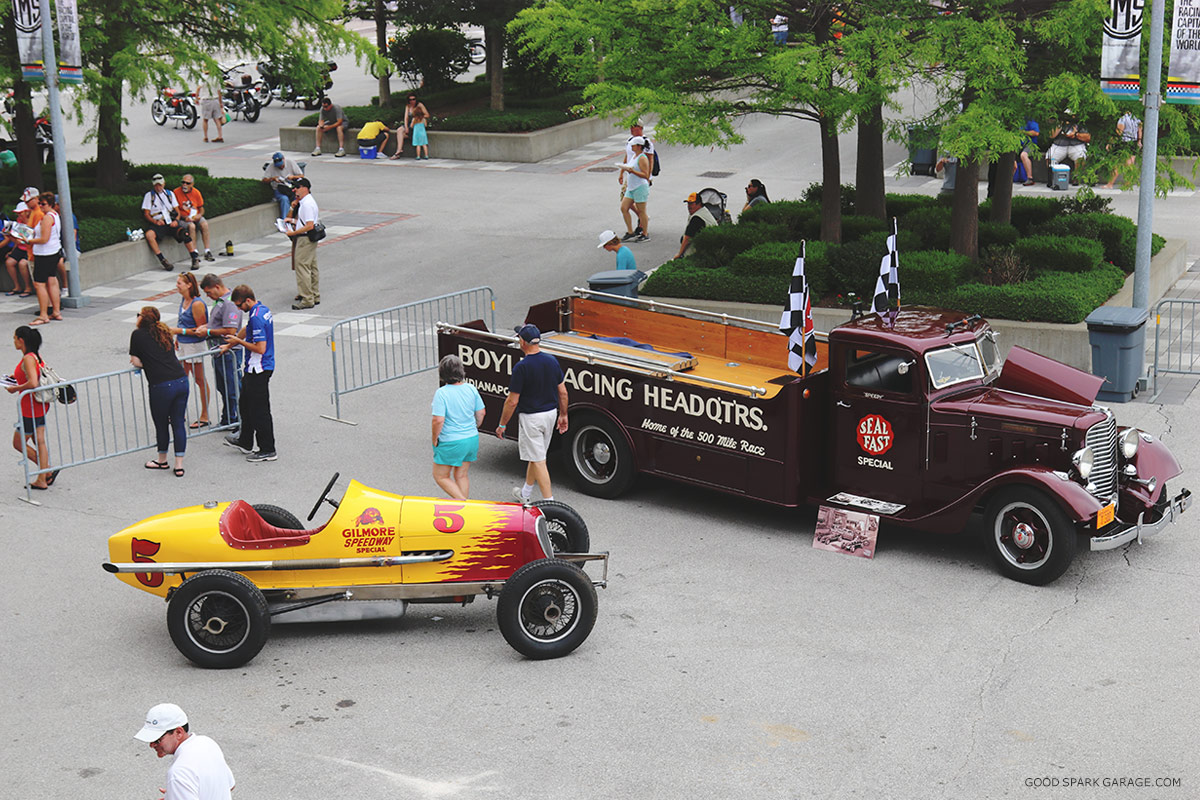 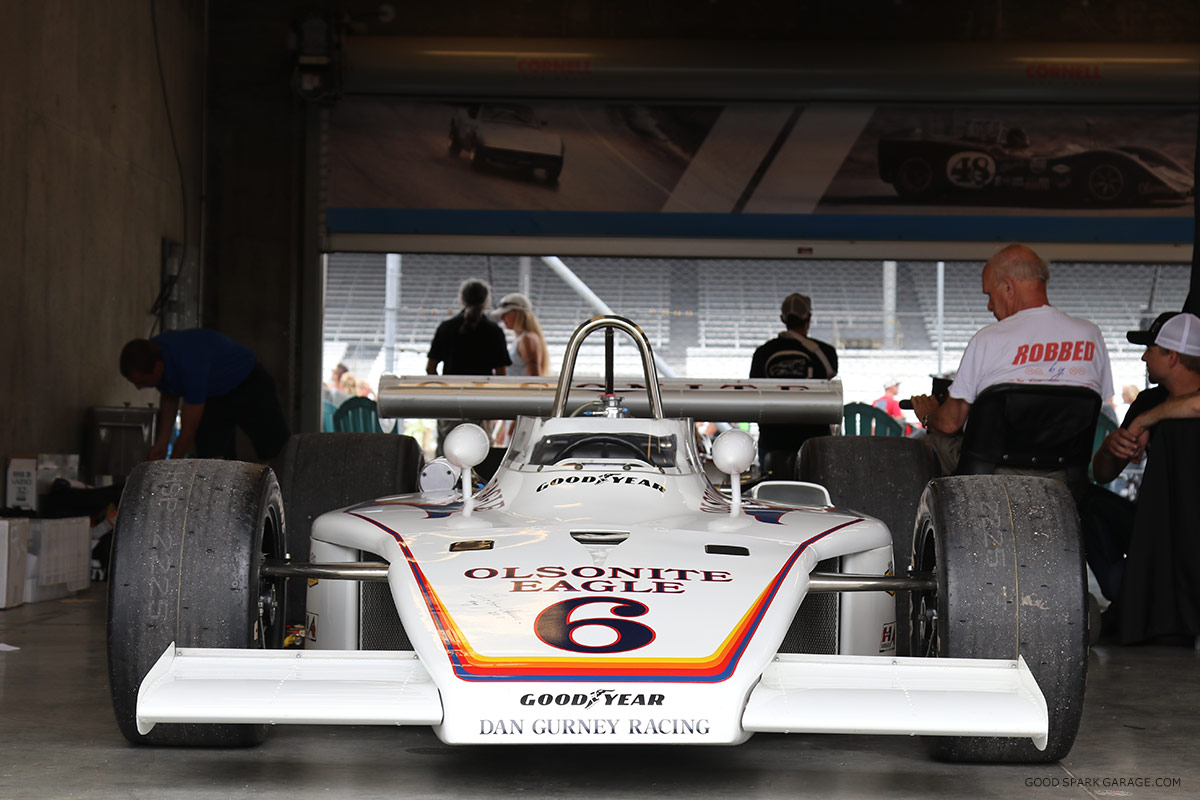 Walking past the open garages allowed us to take in the racing history in little vignettes. You can see the evolution of aerodynamics and safety, imagining the racers tucked into the many styles of cockpits. 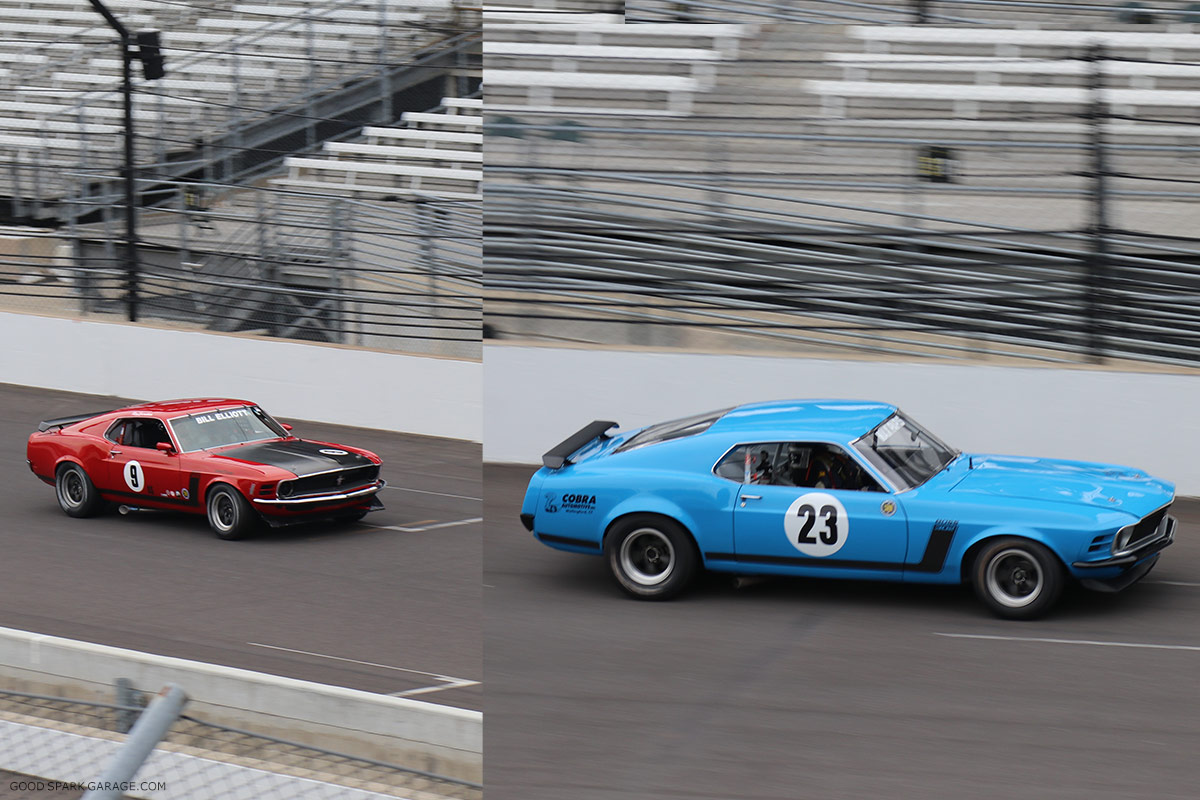 There were tons of American muscle present. It was surprising to see so many Mustangs, Cobras, and Corvettes at one time. Inside those souped-up stockers were some of the biggest names in racing…the biggest names. 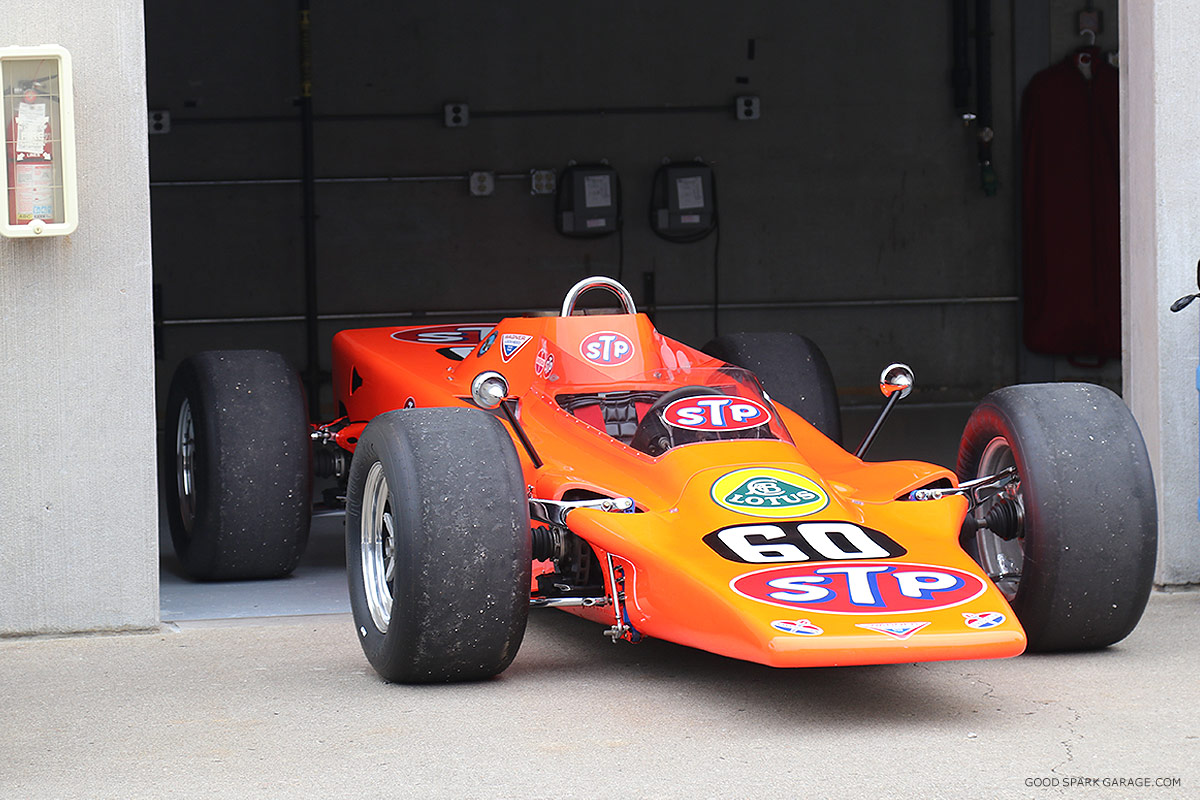 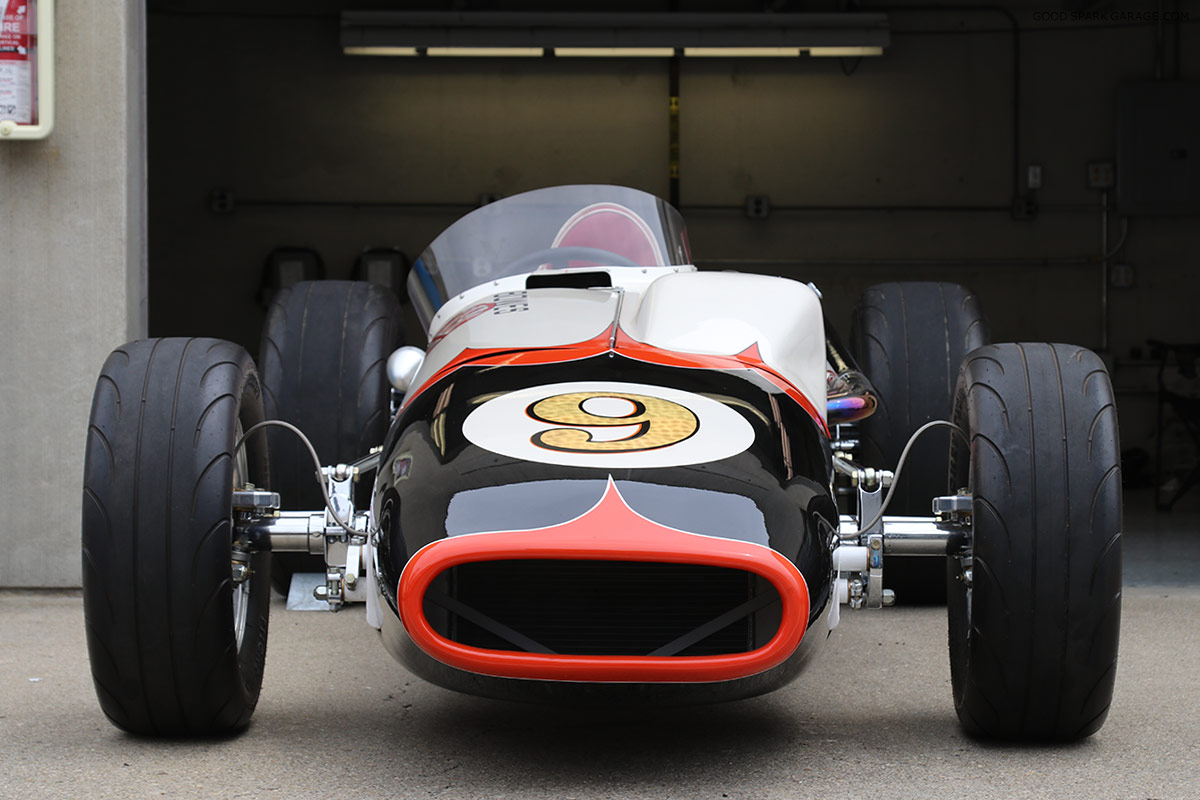 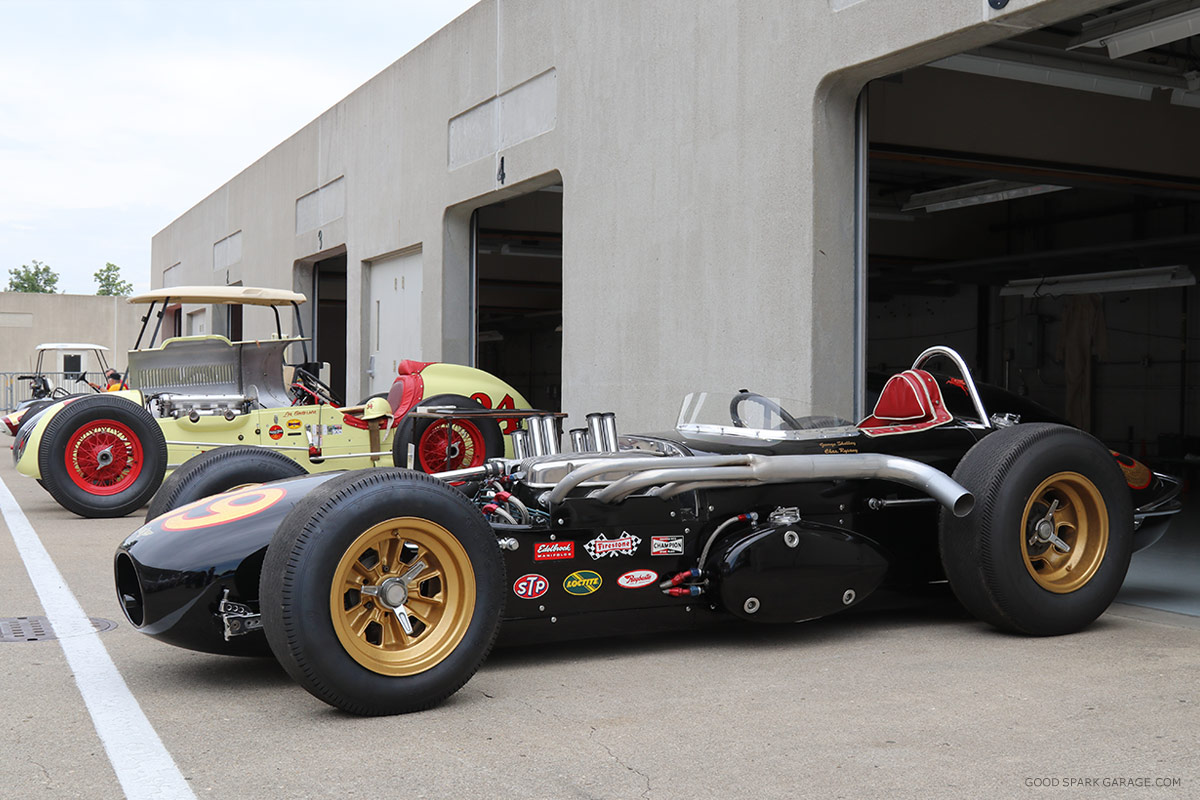 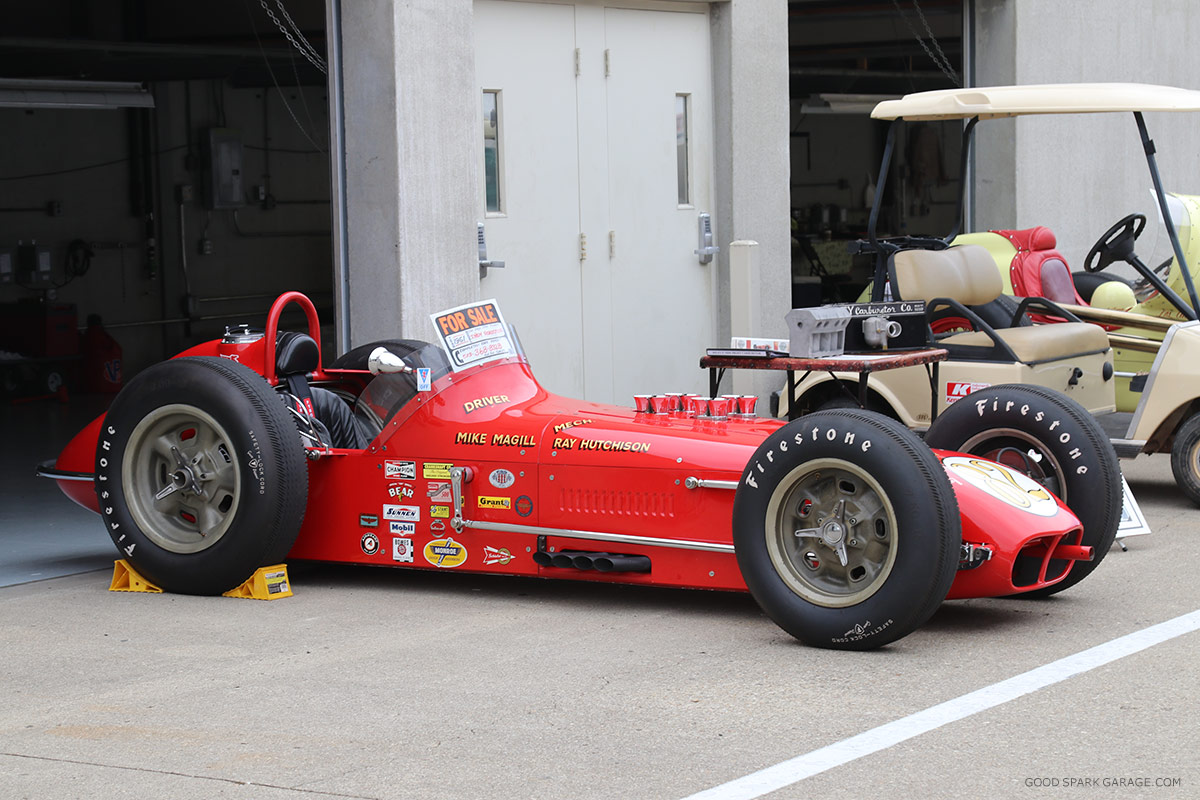 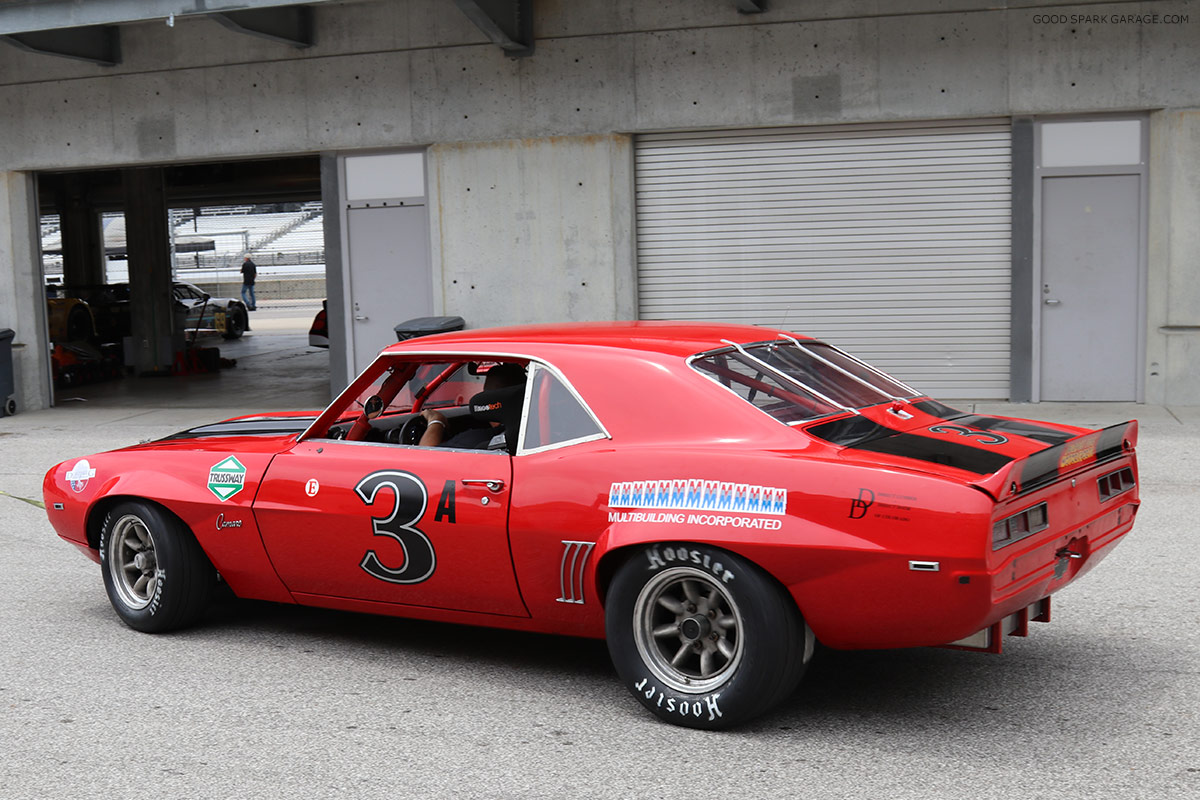 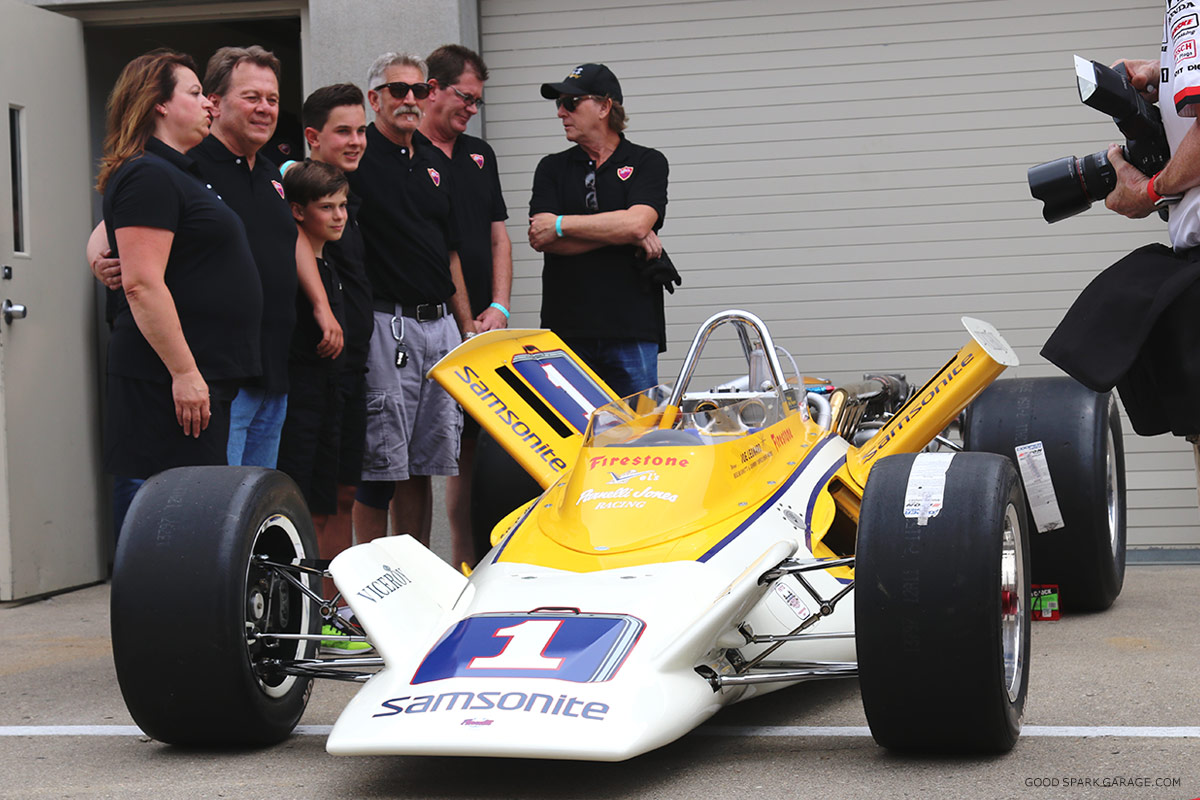 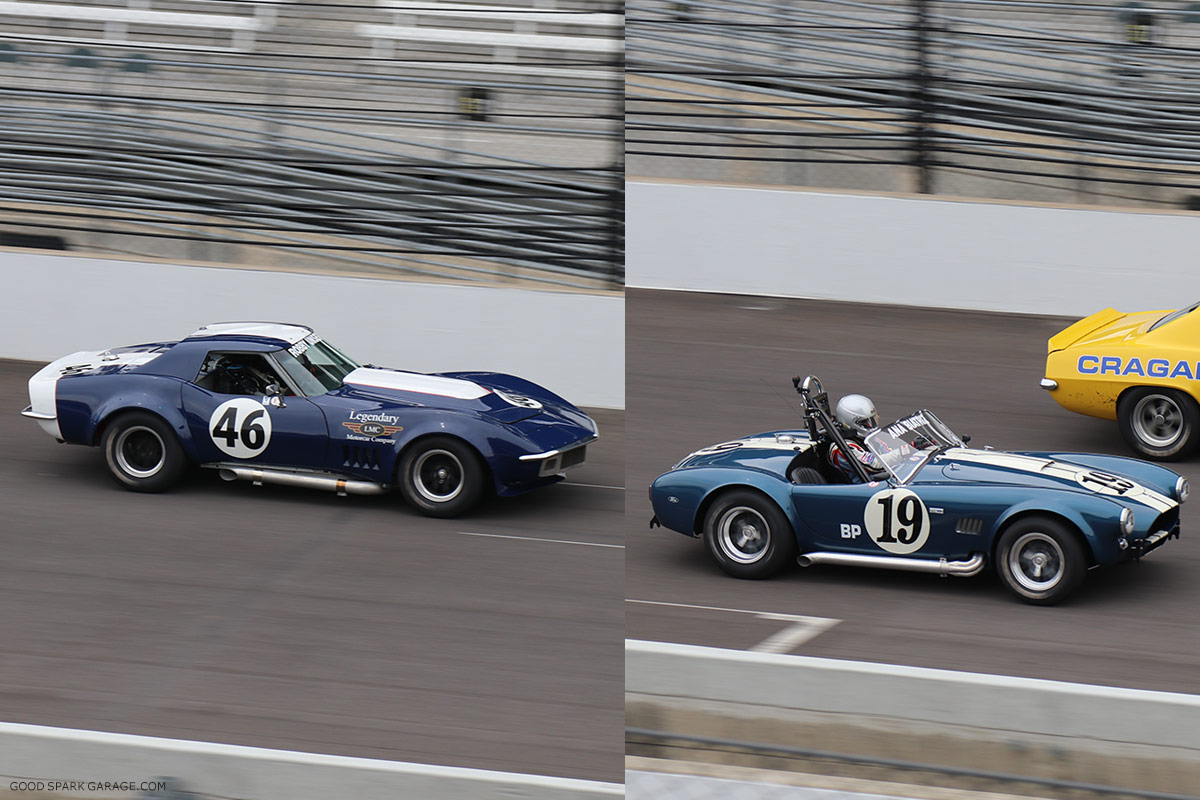 I mean, there were Unsers, Elliots, Mears and more running around the track. Racing royalty. And if you were a kid who played with miniature open-wheel or winged racecars of any sort, you’ll get a visual dose of childhood excitement here for sure. 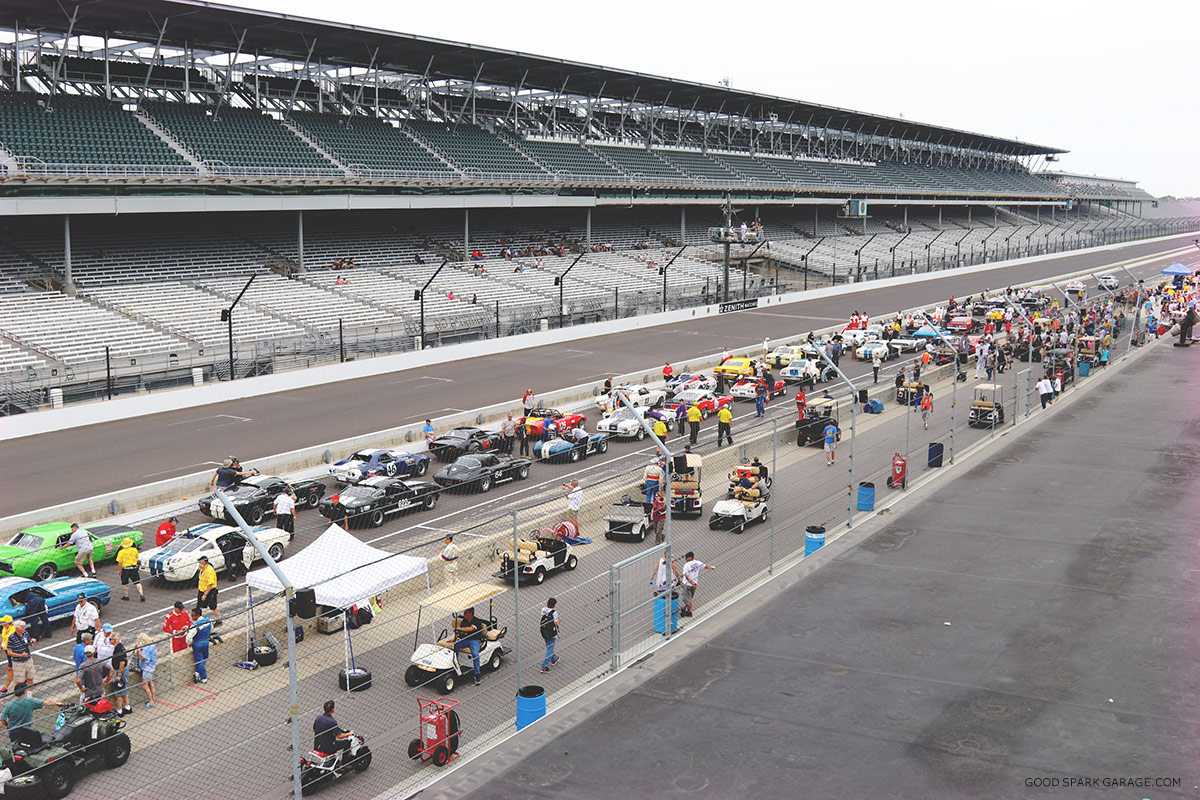 Having experienced the cars, bikes, vendors and exhibitors all packed into to the Brickyard Vintage Racing Invitational, we threw on the helmets and fired up the sidecar. After a photo op near the fencing between turns 1 and 2 of the oval, I rode out convinced this kind of event will live in the memories of the boys for a long time. 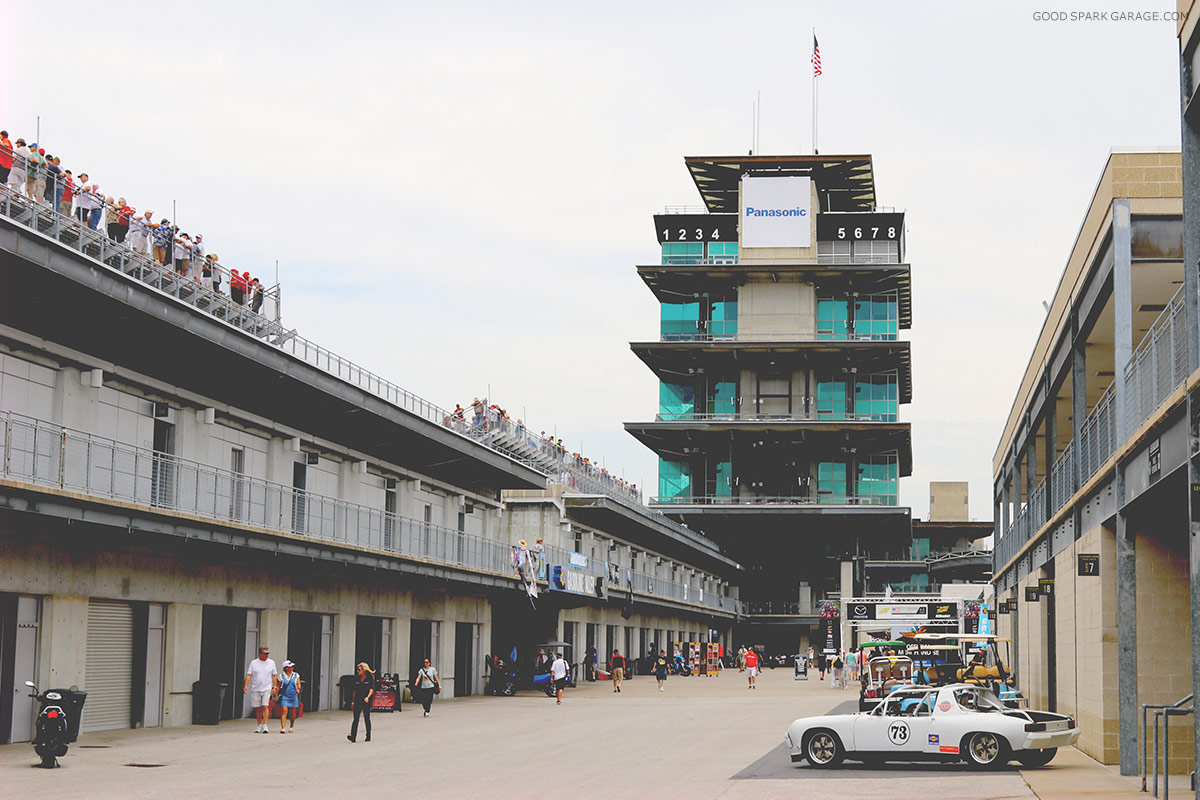 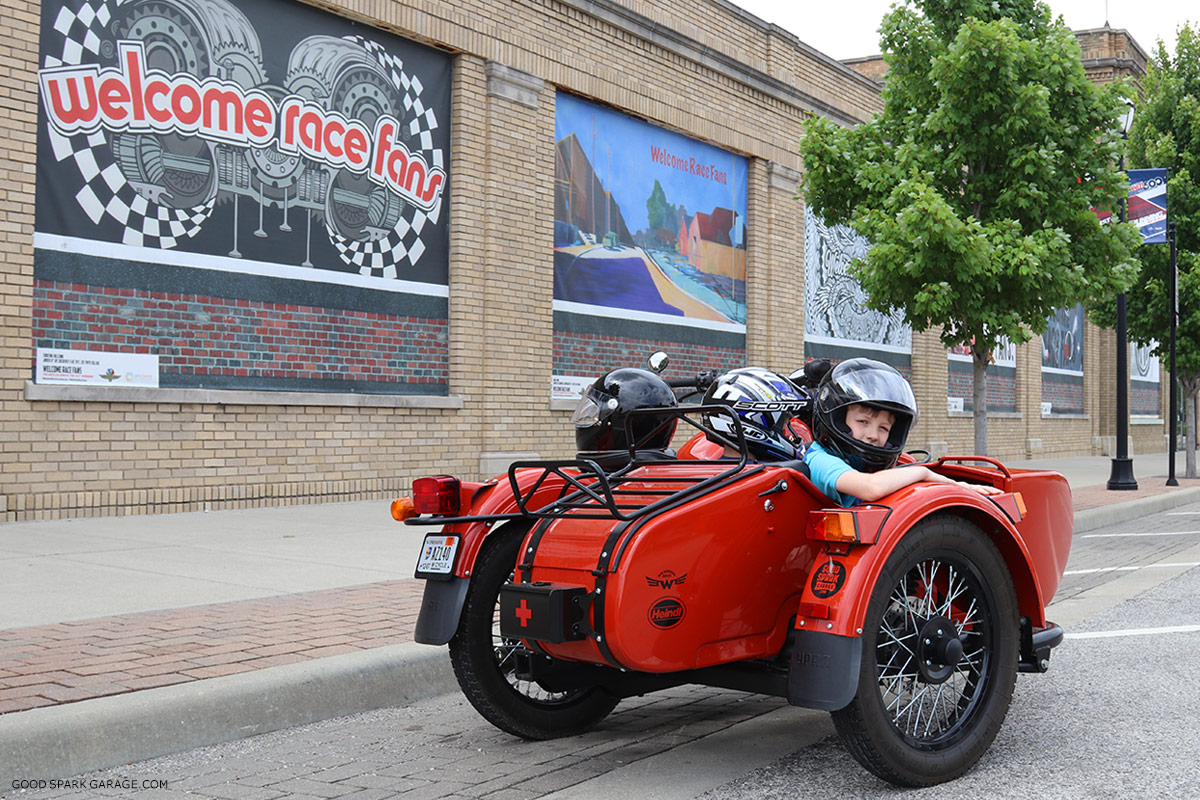 Within a stone’s throw of the track, the main strip in Speedway, Indiana offers restaurants and retail. It has a quaint vibe and visible pride in its racing heritage (justifiably). We stopped into the Famous Soda & Candy Co at the north end of Main Street, which had creaky original wood floors and a very well-stocked selection of sugar. 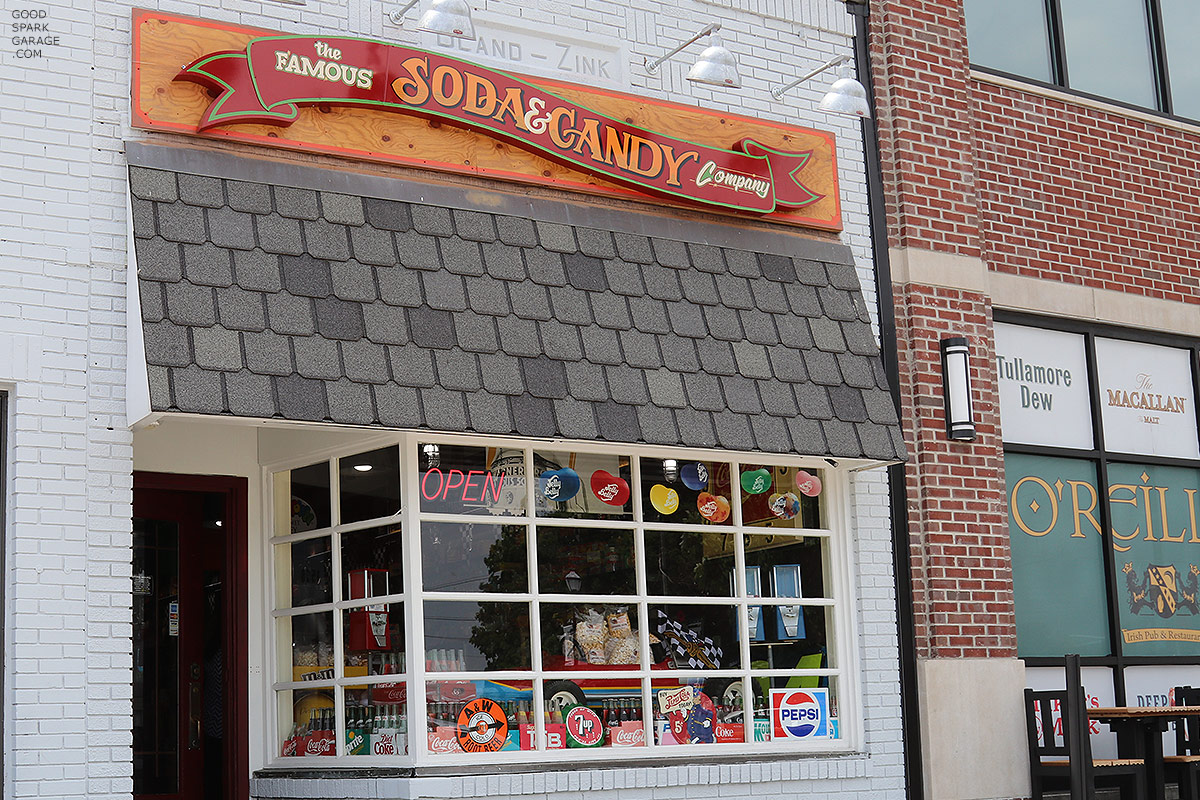 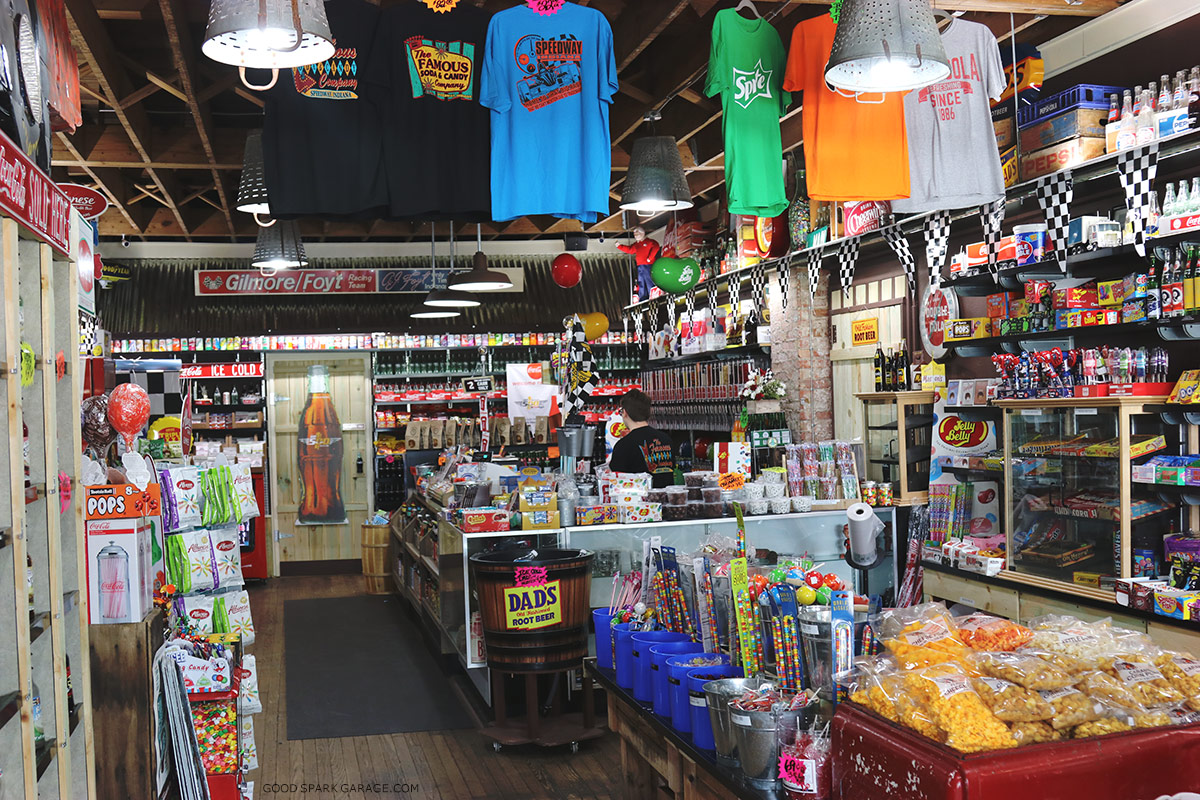 We also drove south to Yogulatte to cool off with some frozen yogurt after a very hot day in late Spring. Putting around this community in a vintage-infused sidecar felt fitting. Walking down the sidewalk, people aren’t curious about the sounds of high RPMs in the distance, it’s a way of life here. 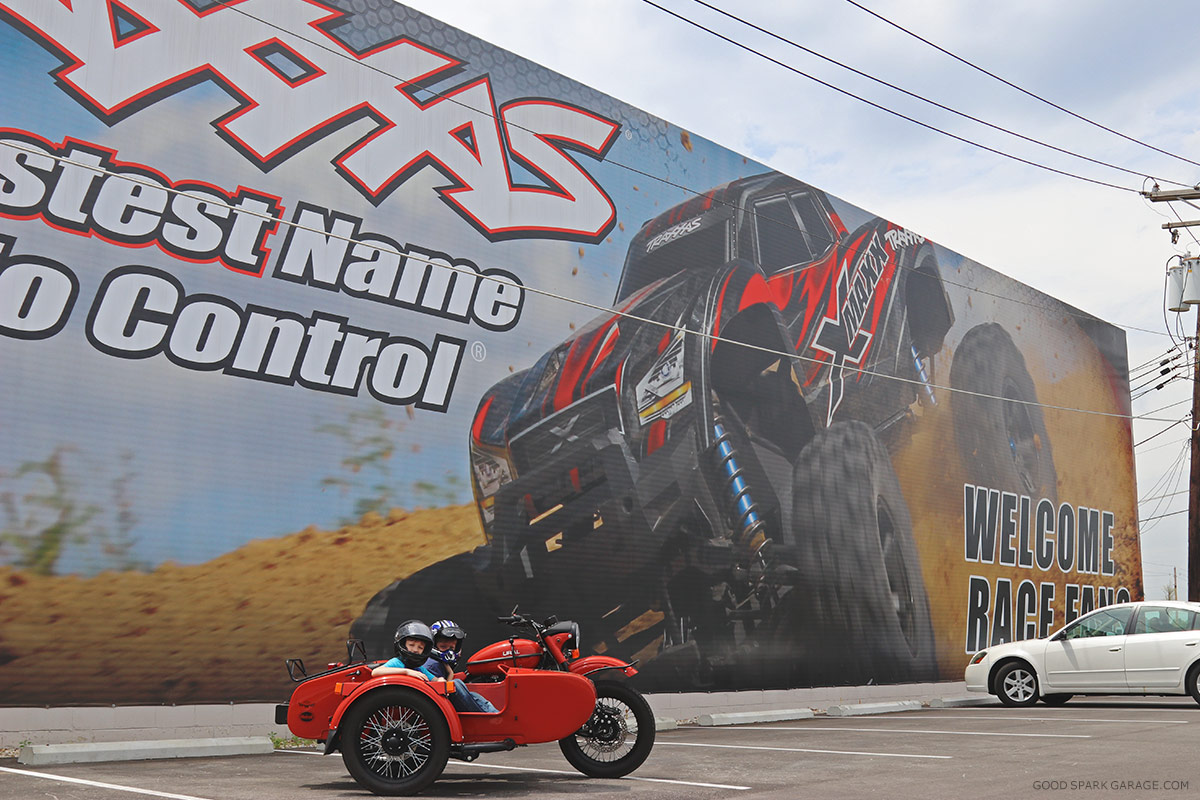 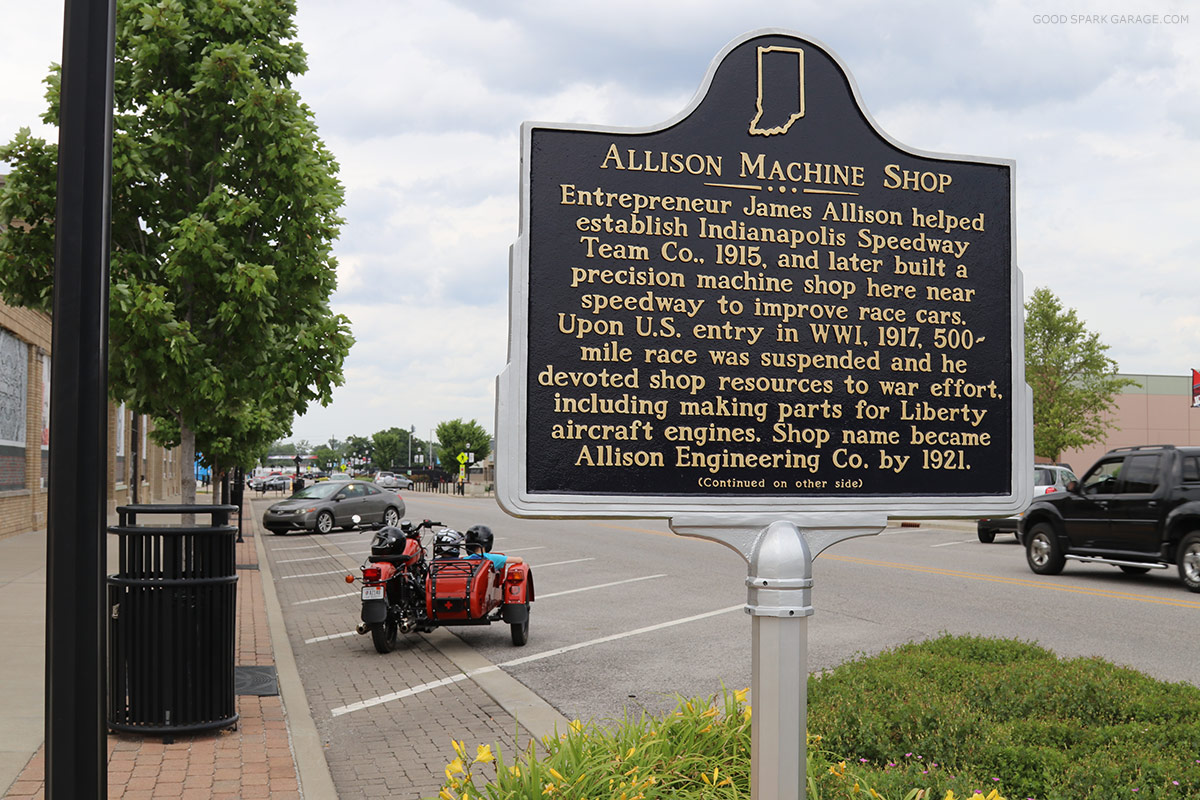 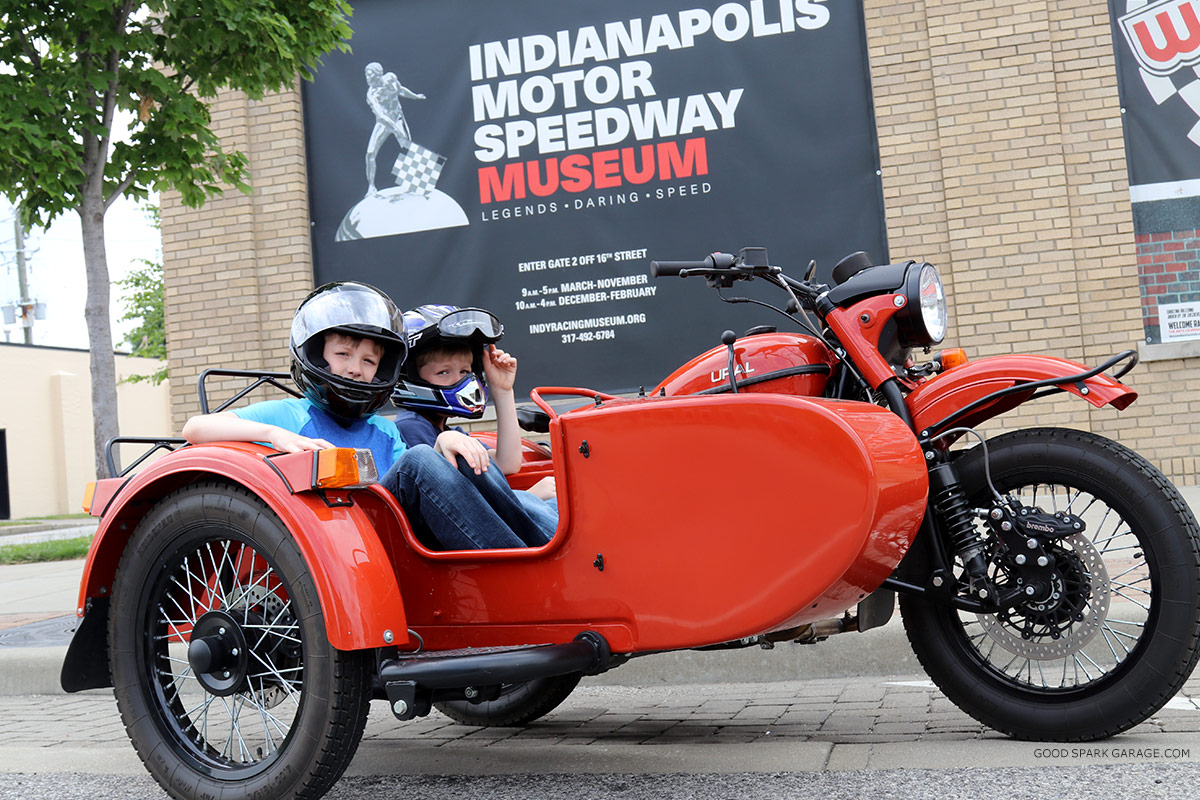 We’re reminded of how lucky we are to have this venue in our backyard. With its events, races and museum, IMS is a place we’d recommend to anyone interested in racing and automotive history. If you’ve ever been to the Indianapolis Motor Speedway, share what you love about it in the comments or on our Facebook album!

Nicky Hayden: Then and Now