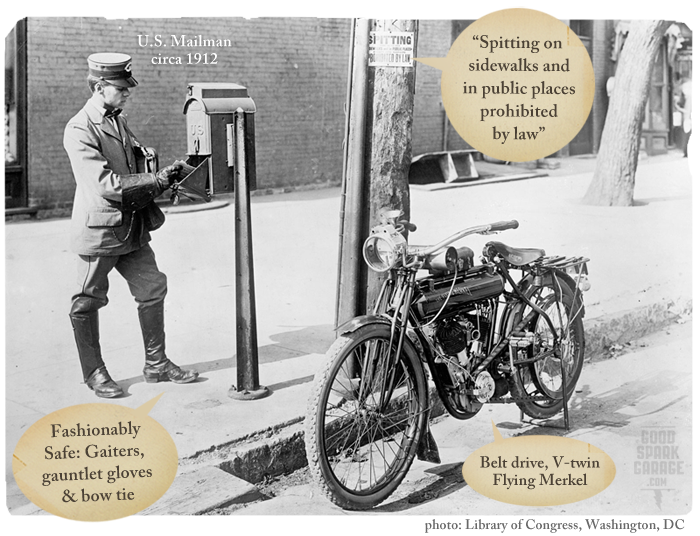 As soon as combustion engines began coughing their way past skeptics and in to the minds of early adopters, the ‘delivery’ industry made a giant leap in efficiency. In the very early 1900s, motorcycles quickly replaced many bicycles, horses and feet as a faster means of delivering information. 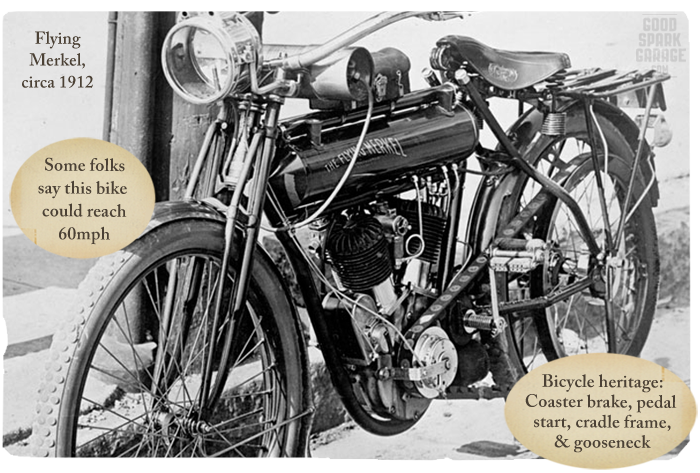 Imagine the transitional period when motorcycles were zipping around horses. This speedy Flying Merkel (above) added a thump to the sounds of the city and left peculiar puffs of smoke in its wake. To start this beast, the operator would fill the crankcase with oil from a glass syringe, retard the ignition, engage the clutch, prime the carburetor, pedal til the motor starts, tip it off the center stand and let the clutch out while pedaling away. 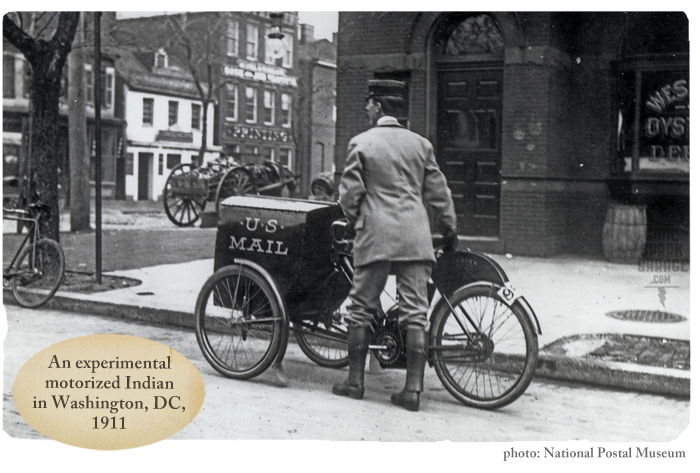 This experimental, motorized Indian tricycle (above) proved to be as efficient as three carriers on foot or two carriers using horse and cart, according to the U.S. Post Office Department. 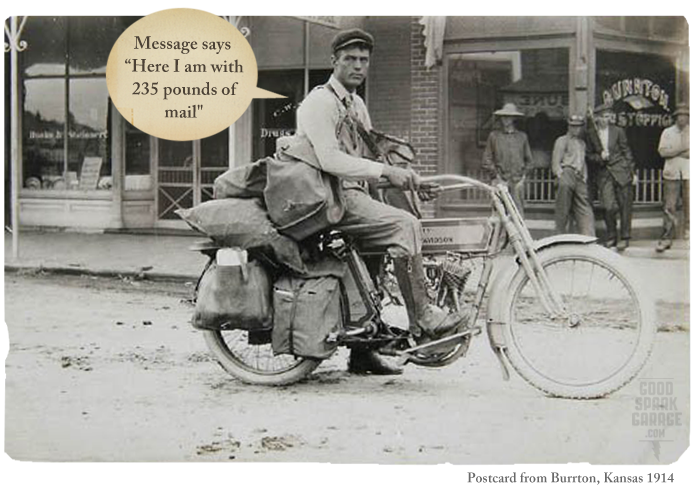 Since horses required rest after long rural routes, carriers had to rotate the animals accordingly. Motorcycles would simplify this process. Of course, when the terrain became muddy or impassable, motorcycles were often temporarily sidelined in favor of the sure-footed horses. 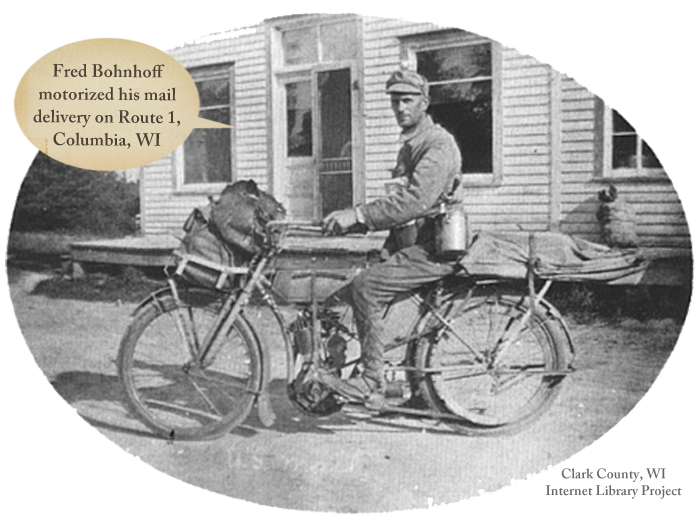 Fred Bohnhoff (above), a mail carrier in rural Wisconsin during the early 1900s, had a 32-mile horse-n-buggy route before he made the switch to a motorcycle (not sure what kind of bike he’s riding in this picture). 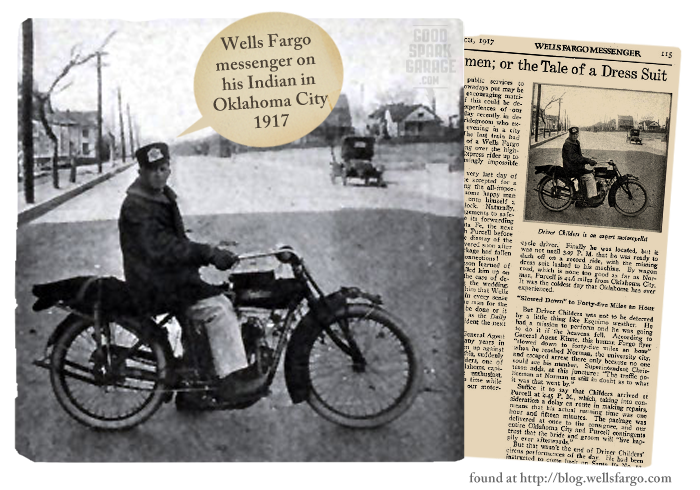 In 1917, an Indian owner and early motorcycle enthusiast, M.H. Childers (above), made an impressive delivery on par with today’s express standards. A man who was going to be married needed his suit within the same day, but he was 40 miles away from the Wells Fargo depot. The first effort to place it on a train failed, upsetting the bridegroom and prompting action by the Wells Fargo boss. He called upon wagon driver, Childers, to go get his Indian and hand-deliver the suit. He delivered the package well before the wedding despite having to “slow down to 45-miles an hour” through a small town in between and repair the bike once (it took him a total of 1 hour and 15 minutes). 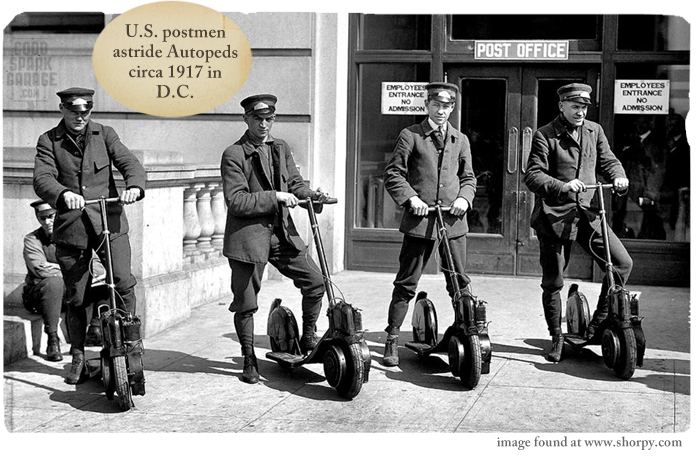 These foldable scooter-like Autopeds (above and below) were made in Long Island City, New York from 1915 – 1921. It was an efficient running, air-cooled 4-stroke engine that powered the front wheel. Its 155ccs and 10-inch wheels carried these U.S. postmen much faster than on foot. (Wonder if they faced any issues of theft?) 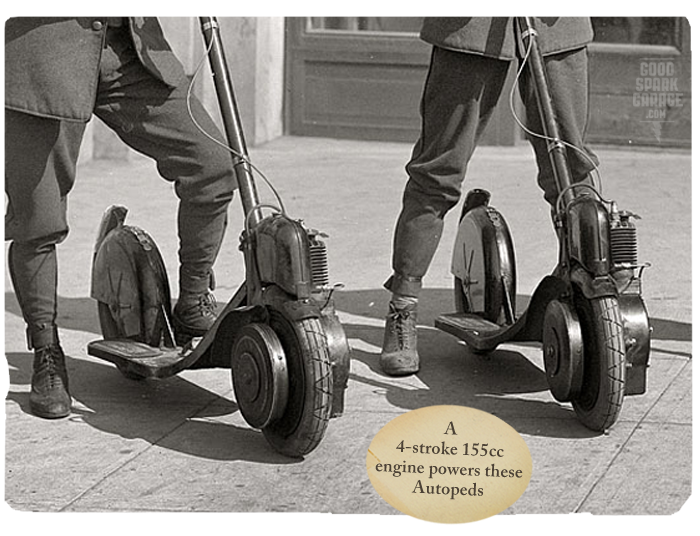 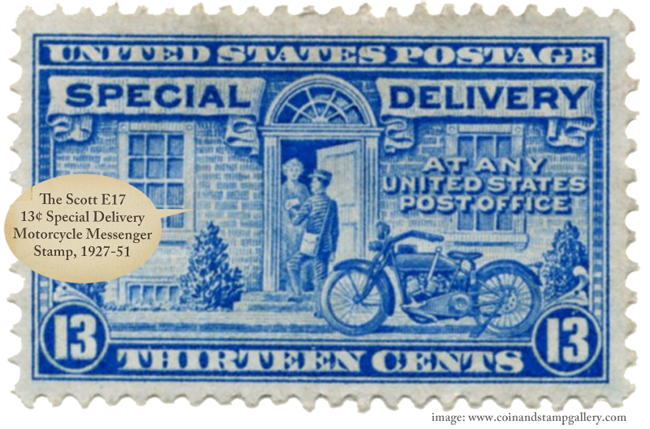 This stamp features a postman and his Harley-Davidson Model 22. Back then, we’re bettin’ a motorcyclist had to be mechanically inclined to stay punctual. 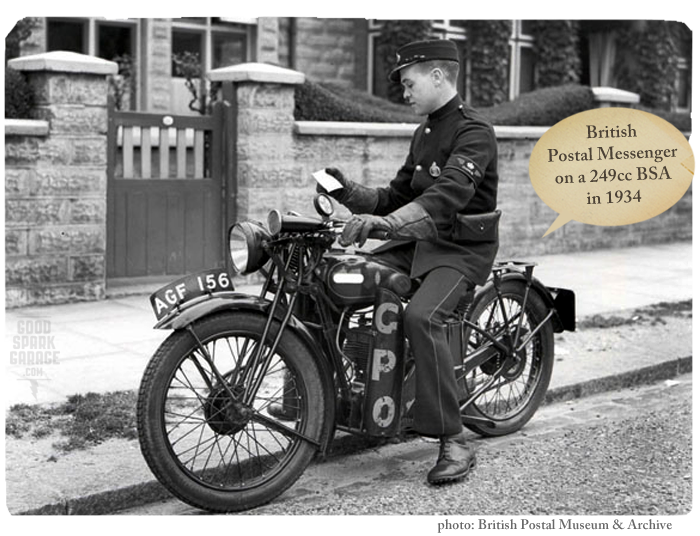 During the early 1930s, the British Post Office was delivering 65 million telegrams per year. To help manage this massive task, fleets of small-displacement BSAs were added to the postal force. In Leeds, 17-year old boys were allowed to operate the motorcycles at an average of 15mph. Overall, this new service was a success, creating more motorcycle messenger jobs in surrounding cities. 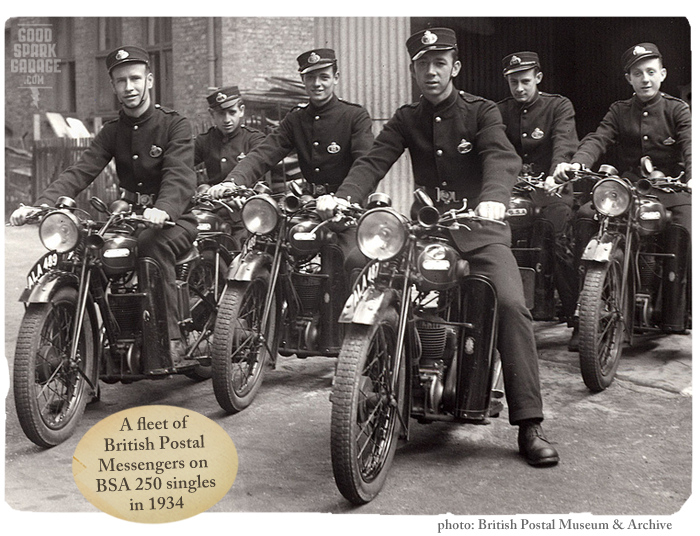 By 1934, the GPO motorcycle fleets were upgraded to side-valve 250 singles. Woulda been neat to hear this swarm of pippety-popping BSAs leave the post office all at once, fanning out across the city. Sidecars had been employed since the nineteen-teens in the UK when more capacity was needed. By the mid 30s, they were no match for the increasing number of small vans like the Morris Minor. Orders for new sidecars stopped in ’36, but some of the rigs stuck around til 1947.

Back in the United States, four-wheeled mail vehicles became the norm by 1928. The U.S. Postal Service listed 27 government-owned motorcycles compared to 6,392 trucks as part of its fleet. Motorcycles would move on to other civil services as police bikes, armed escorts, and military vehicles. Today, as machines associated more with recreation, racing or commuting, it’s fun to learn of their historic role in speeding up the transportation of information.

(Update: Mel has been named senior vice president and general manager of the Circuit of The…