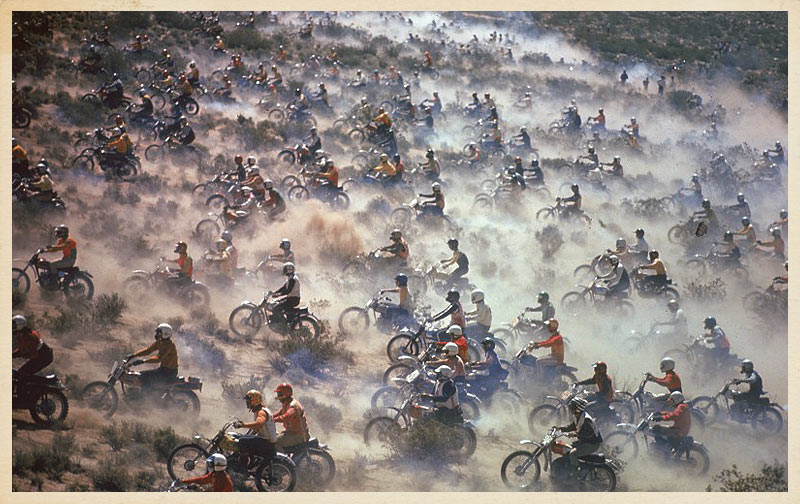 Introduced as a two-buggy race in 1967, the Mint 400 quickly became known as one of the toughest desert races in America. Its $100,000 prize, its celebrity competitors, the Girls of The Mint 400, and the always-challenging terrain helped catapult the Great American Race into icon status.

Around 1961, the Mint Hotel and Casino in downtown Las Vegas was purchased by Del Webb, a real estate developer who hobnobbed with folks like Bing Crosby, Bob Hope and Howard Hughes. Webb’s money and history go way back to WWII days, when his construction company landed many military contracts (one being an internment camp for over 17,000 Japanese-Americans in Arizona). In 1945, he and two partners bought the New York Yankees for $2.8 million. In 1960, his retirement community project, Sun City, AZ, made the cover of Time magazine for its success. 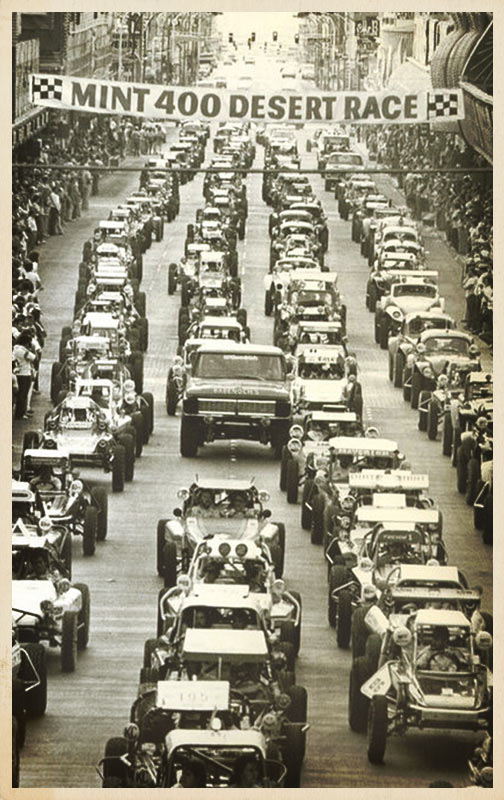 Webb’s PR guy for the Mint Hotel, Norm Johnson, was inspired to create the Mint 400 after reading about the Baja 1000 in a magazine. He thought it’d be a good way to draw attention to the Mint’s annual deer hunting contest in 1967 (of which the grand prize was a dune buggy). Two racers were hired to compete in a 600-mile race to The Sahara Casino, which was the Mint’s sister-casino built by Webb. It was a success. The next year, a multitude of participants were invited to race a 400-mile loop in the Vegas desert, but many of the 115 buggies and motorcycles succumbed to the challenging conditions. Dust overwhelmed the racers. Even Parnelli Jones’ Bronco seemed doomed after a few breakdowns. A Mint executive staffer deemed the event a disaster until Earl Thompson, president of the Sahara Casino and competitor in the 400, drove in saying, “‘This is the greatest God**** thing I’ve ever seen!” (See the article where this was mentioned.) 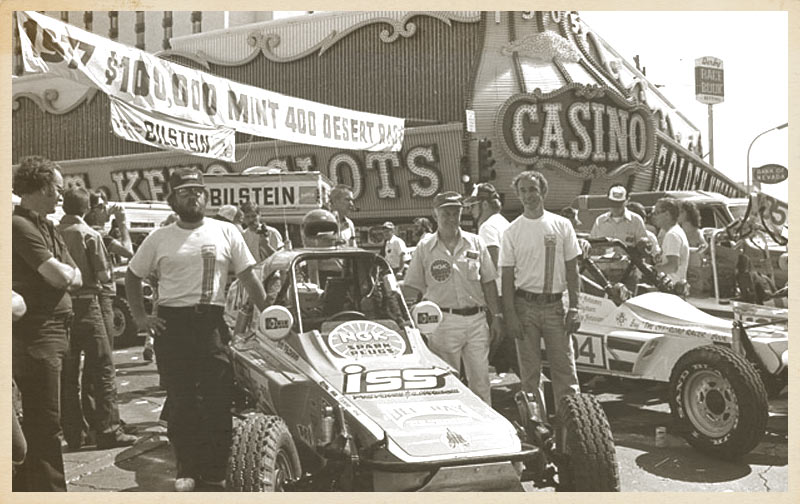 Another chapter in the Mint 400‘s storied past includes Hunter S. Thompson, who was sent out on assignment by Sports Illustrated in 1971 to write photo captions for the event. During his experience in Las Vegas, he ended up writing a 2500-word piece that was rejected by Sports Illustrated. The manuscript was picked up by Rolling Stone magazine and later evolved into his most famous novel, “Fear and Loathing in Las Vegas: A Savage Journey to the Heart of the American Dream.”

As the legitimacy of the race grew, so did the purse. From no more than $30,000 in its first couple years, the prize rose to $100,000 in 1975. The number of celebrity participants rose, too, including racing royalty and headlining entertainers. Parnelli Jones, Al Unser, Rick Mears, Mickey Thompson, Ivan Stewart, Walker Evans and many more racers from different disciplines competed along with big screen stars like James Garner and Steve McQueen. 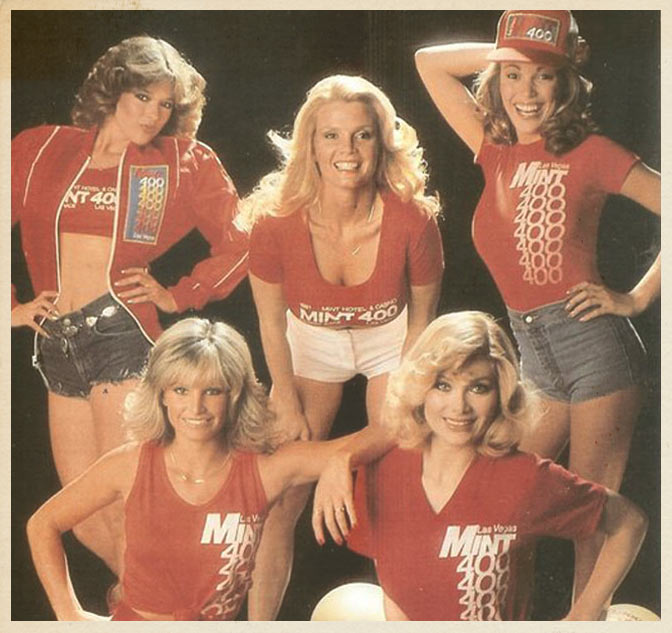 In 1972, Mint Hotel exec K. J. Howe upped the promotional ante by creating “The Girls of the Mint 400.” Hundreds of contestants would be pared down to ten girls, then a final five would be chosen to be the Mint 400 Girls. Several would go on to appear in TV shows, commercials, and Playboy Magazine. Two you may have heard of? How ’bout Vanna White (below left) and Wonder Woman herself, Lynda Carter (below right). 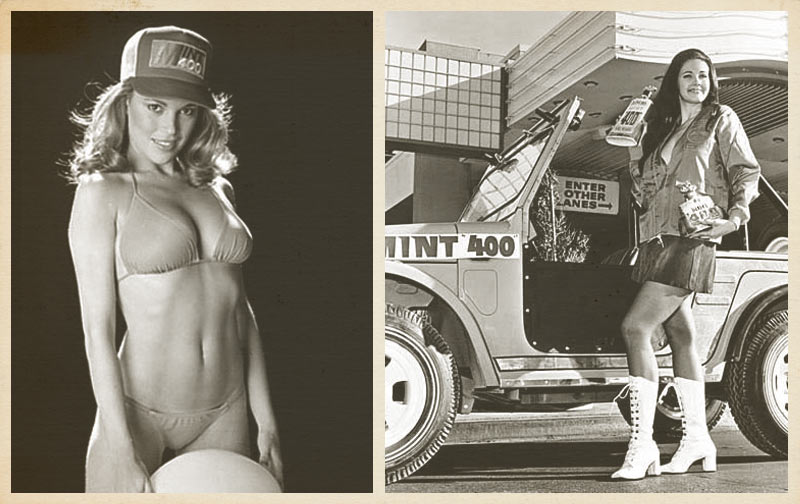 What inspired the writing of this article and our hunt for pictures of the Mint 400, was when we came across Bill Eppridge’s photo, taken in September of 1971 for LIFE magazine (first pic of this article). Seeing all those ol’ bikes bouncing across the dusty, unforgiving terrain made us want to grab a pair of old lineman boots, a metal-tanked Husky and go back in time to that very moment.

Things changed after the glory days of desert racing in the late 60s and early 70s. Motorcycles were phased out of the event in 1977. Webb sold the Mint Hotel in 1988, signalling the end of a two-decade run of the Mint 400. If you get bummed when special races like this meet their demise, you might happy to know Mint 400 was revived in 2008. The current organizers try to include and respect the classic attributes that made “The Great American Off-Road Race” such an icon of American racing. (Click here to learn more about the modern day Mint 400.)

Click here for a nice li’l vid showing a timeline of the Mint 400.

We're gonna miss MotoGP in Indy. It's a bummer, for sure, but we're thankful for its…