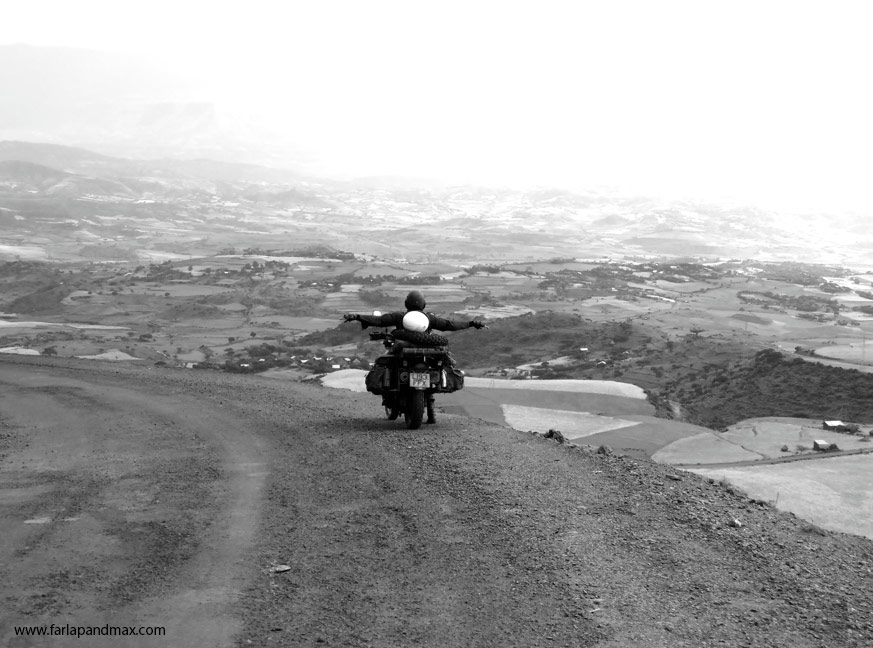 Max disappeared. He escaped on a motorbike and wouldn’t return for three years, after logging over 37,000 miles across the globe. He fled the humdrum rat race to receive an education in freedom from the world itself. A book about his journey aboard a finicky BMW Funduro named Farlap is materializing at this very moment. 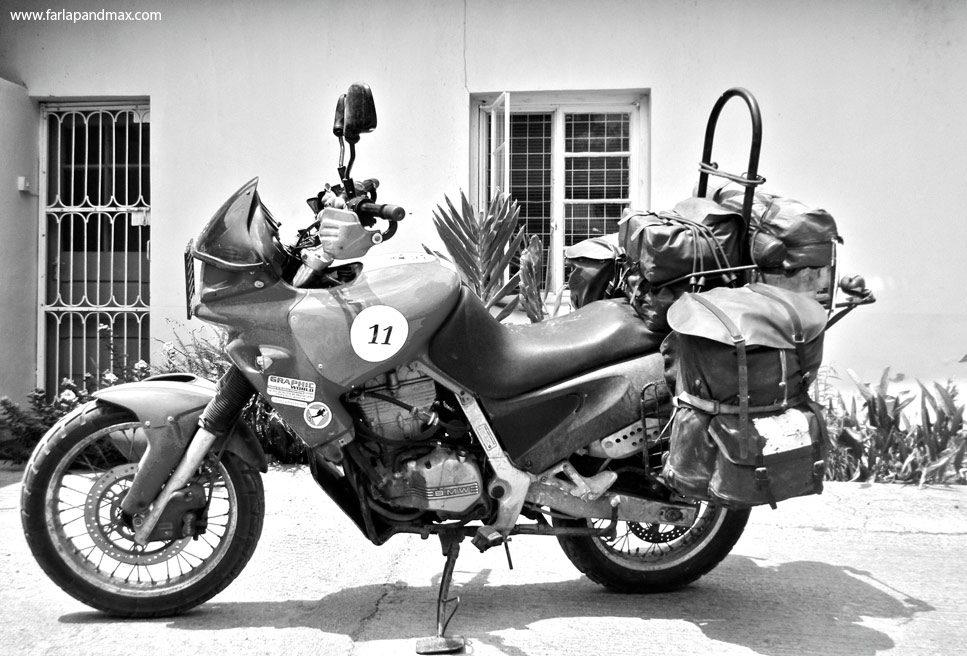 Max Wellington shares his vision and a well-penned request in a kickstarter campaign to produce his story, “MOTORCYCLE ADVENTURES OF FARLAP & MAX: THE BOOK.” See the video below and the insightful answers to our questions for a taste of what’s ahead for the Melbourne-based writer and rider.

GSG: How much of a plan did you have regarding a route? Did fate guide you? Did it involve prayer?
Max: Someone once said “a well planned and sufficiently-funded adventure is no adventure at all.” But in the beginning, I meticulously mapped-out where I was going, why I was going there and everything was researched and plotted-out. But in less than a week, all that research and planning went by the wayside. And replaced by – well I suppose you’d call it fate – I was kind of “taken in.” The road started to change my plans, and then all the people I met started to change where I was going. It even changed what I was riding – from bike to horse at one point!

Soon I had no clue exactly where I was going, or where the road was actually leading me. All I knew was that I was running away more than searching (well at least that’s what I thought). I was just scared that I would turn out to be some old dude stuck in the suburbs. Later on, I developed more confidence again and started to hope that the World would show me the right path to being a good man and maybe, if I was lucky, lead me to the right person for me. Of course those things did happen (which I’m super thankful for), but that doesn’t mean that following the path and having my prayers answered was something that came cheaply. 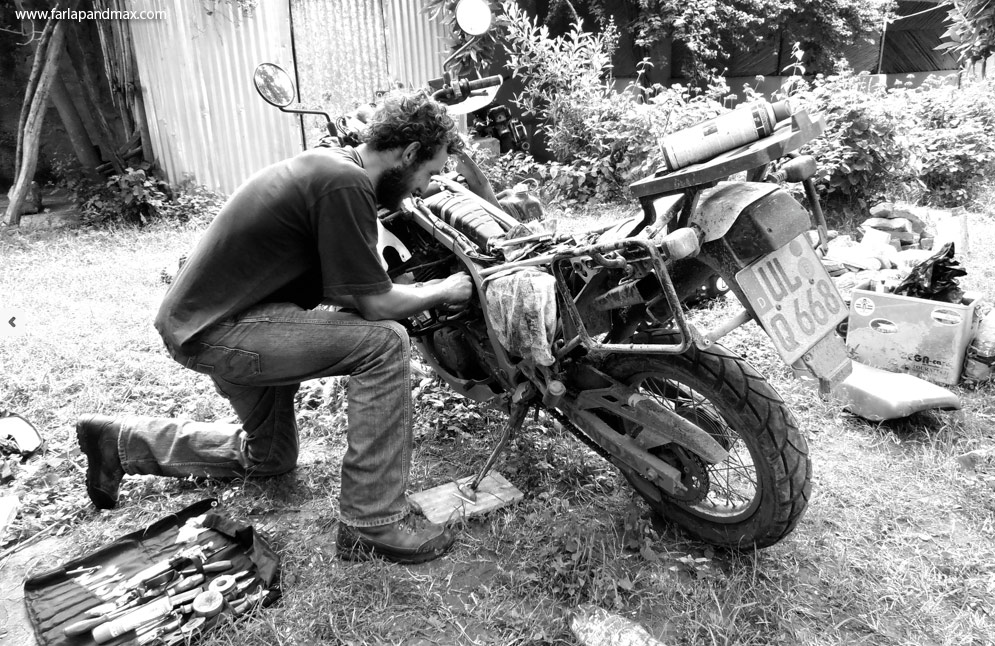 GSG: Was it advantageous to secretly depart before heading into the unknown?
Max: Slipping away in the crisp, early morning is the proper way to start a motorcycle journey. Turning the phone off, and resigning from family and friends was just something I did. Sure it sounds crazy, but I’d never known anyone who had done this sort of thing, and knew everyone back home in ‘normal town’ would think I was an idiot and I didn’t want to hear their criticism or answer their questions.

“I was kind of brittle at the start, my plans were fragile and I didn’t want to get convinced out of doing it.”

On another level, big promises can put time constraints and can even frame everything as a “failure” if you don’t make it “all the way” – I’ve seen it happen, guys going home with their tail between their legs just because they didn’t ride the whole distance that they promised their friends back home due to injury or whatever. So yeah, it’s maybe better to just keep your journey to yourself at the start, a lack of other voices in your head is sometimes good. 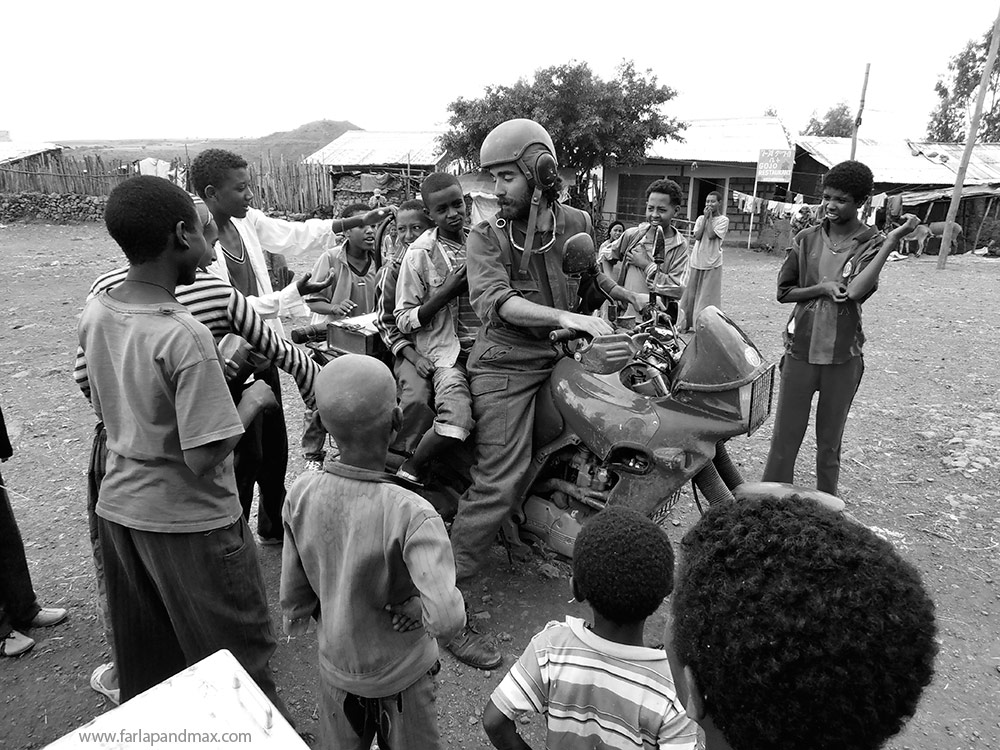 GSG: When encountering strangers over this long span of time, what was a common reaction to you as a foreign motorcycle traveler?
Max: It was an absolutely riotous Theatre at times. I don’t like big crowds, they make me nervous. So once in Ethiopia there was like a hundred people watching me change a tyre. Kids following me around when I had to pee in the bush, so close that I thought I would accidentally pee on them. I used to wave at everyone and was mindful to not appear overly western. No flags, no fancy gear. I think after the first curious looks, I think my disheveled, mud-covered approach rendered me colors that blended into many strange places. I liked waving, and people liked to wave back. Then I went to the cities and there was less waving back, I don’t know why. Maybe it’s just a country boy courtesy thing.

GSG: Did this trip reveal anything to you about mankind in general or dispel/confirm any of your preconceived notions?
Max: It revealed too much to digest without writing this book. For example, in Kenya, the owner of a famous adventure-biker hostel called Jungle Junction said to me, “Max, one thing you will learn on this adventure is that money is shit.” I will always remember how he said it. So matter-of-factly. And It was so true, in the context of Africa. Today I think to myself, okay, sure it was a bit of a generalization, but what the hell – money is shit.

“Max, one thing you will learn on this adventure is that money is shit.”

A lack of money usually means more misadventure. Which leads to more human communication and forces one to develop humility and a sense of humor. People who go home because they ran out of money are lazy. It never once stopped me doing anything I wanted to because I had little money. It was so incredible to realize how many wonderful things happened without the use of cash. And I mean, some times it was damn right offensive to offer money.

“The trip revealed to me that a man is not controlled by money lest he is fooled into thinking so. I never met any unhappy children in Africa. Maybe they didn’t know money yet?” 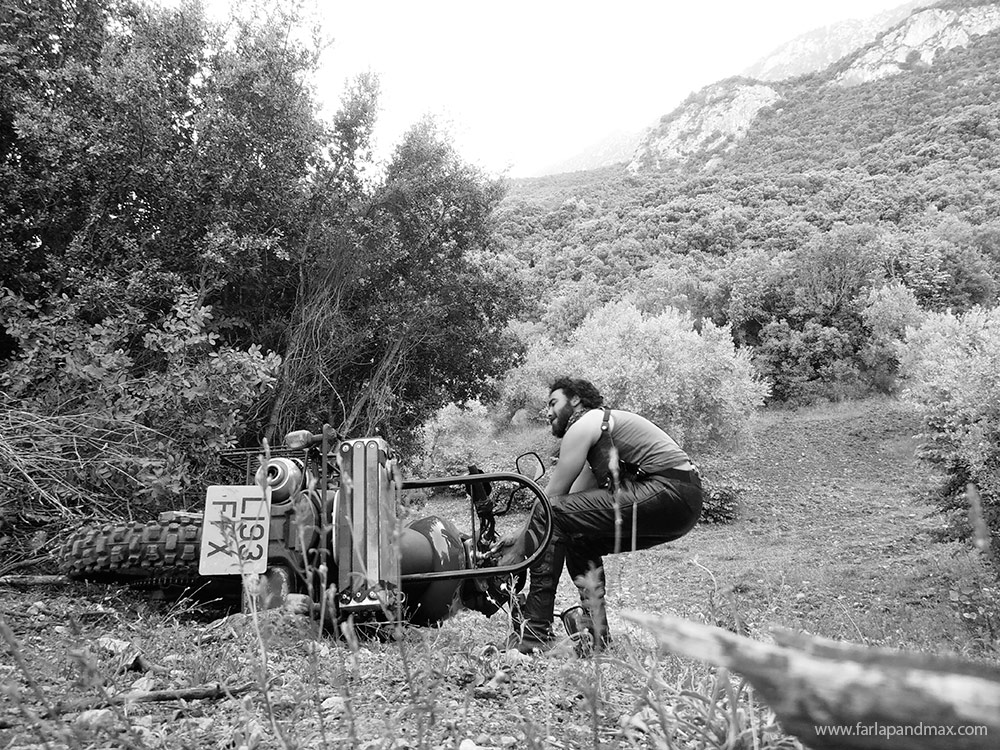 GSG: You covered 60,000km of various peoples and terrain. How much of it is luck, blessings or good decision-making that you survived it?
Max: That is a difficult question to answer without revealing that I am a whole-hearted believer. It wasn’t like it was a love ride, based of faith and optimism. But motorcycle riders are a lucky lot, I think. I can remember in Tanzania, something telling me in my ear to shift-down a gear, to get more control of the bike. Before I knew it, two 18 wheelers swing around a blind corner less than fifty meters ahead of me. Because I was traveling slower, I could change my line and swerve onto the shoulder. 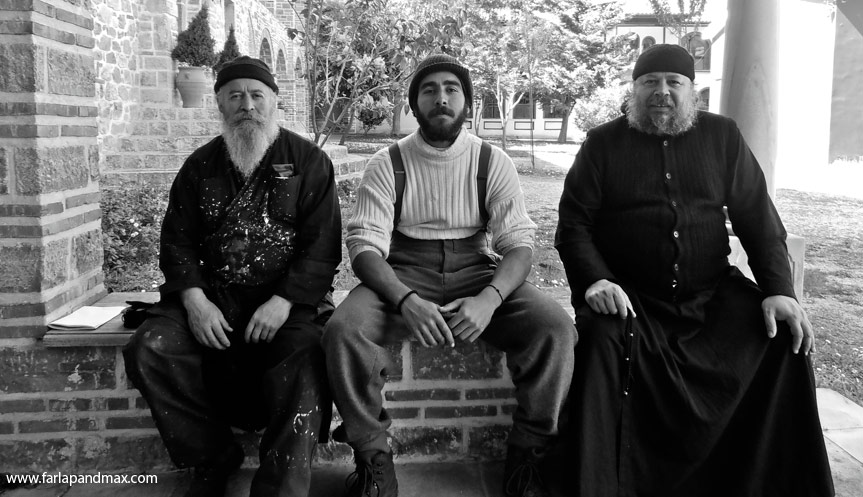 GSG: What would you say to someone who says, “I’d like to pack up like Max and escape the grind, but I couldn’t afford to.”
Max: I don’t really know. One day I’ll know what to say to people who want to emulate what I’ve done, but not yet. I just found out that today the paper work and insurance involved in doing a similar adventure as mine is so expensive that it reserves such big world adventures only to people who can afford it. It wasn’t long ago that I did it without insurance, visas, or much money. Great for pampered BMW tourists, but out-of-reach for your average kid on the block. I’m hopeful that there’s always a way round it.

“Now that I know I don’t need society, I don’t fear ‘not fitting’ into it.” 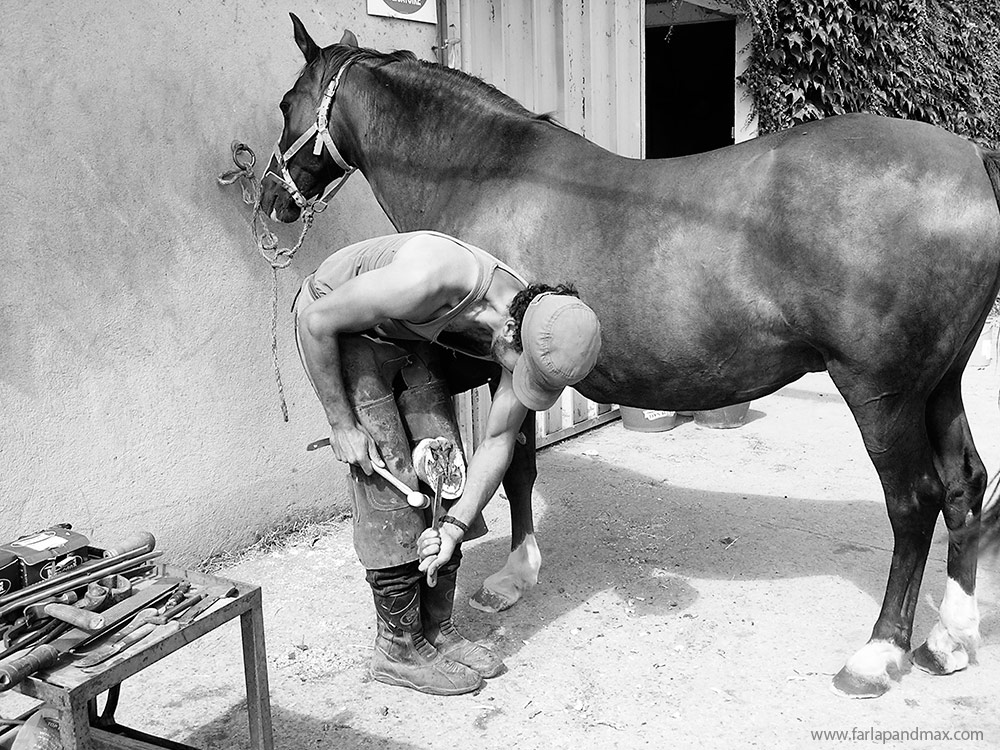 GSG: You returned, victoriously we assume, to the world you wanted to flee. How often does your mind wander back to your experience with Farlap and the open road?
Max: Victorious, I guess. At least I knew when to stop, and when to come home. There’s so many men going ‘out-there’ on their motorcycles into some dark place, even the most famous “Jupiter’s Travels” in the end I feel like he’s taken a turn for the worst, on a road into insanity, and I can’t help but feel sorry for him and all his problems. 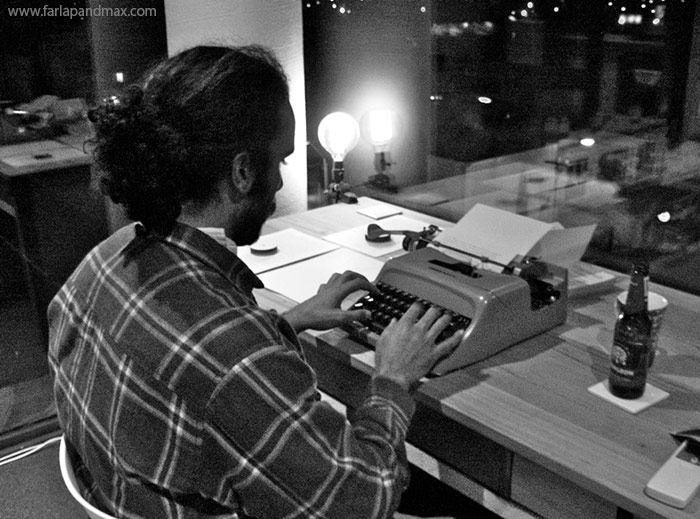 As for me, I like working day to day, soon going to move out with my fiance (who I met on the road) to the countryside so I can shoe horses and write this book. Now that I know I don’t need society, I don’t fear ‘not fitting’ into it. It puts me in a position of quiet confidence I suppose. Today, from this new platform I’ve built for myself, I can do more real good from within and without the system. 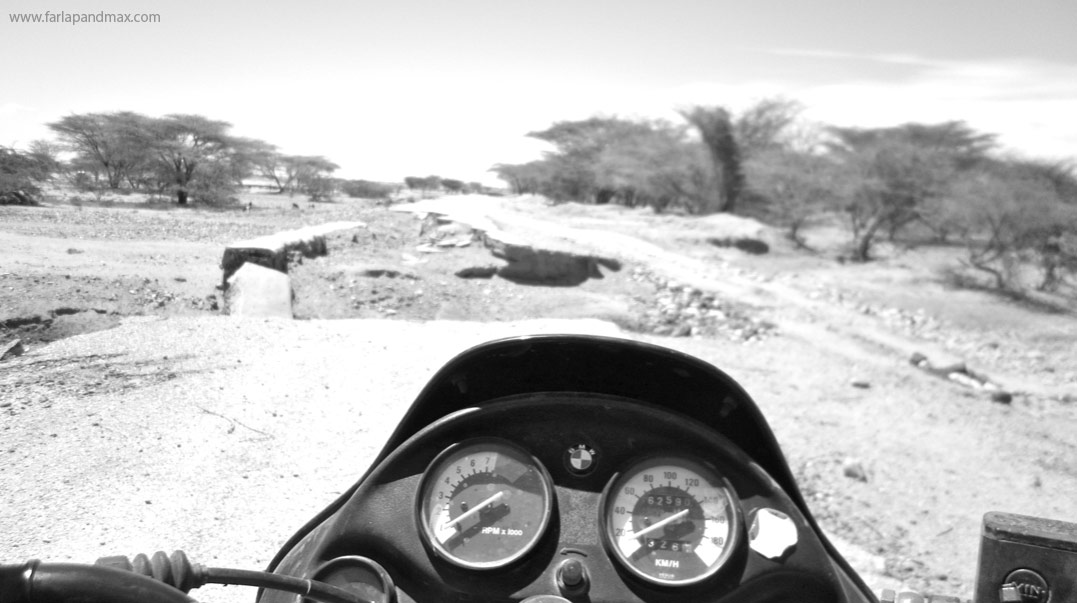 GSG: You’ve confronted rebels, Mother Nature’s fury and risked life ‘n limb; would you do it all again?
Max: I couldn’t even if I tried. I guess its just like you can’t repeat school. I mean, you can never be in fifth grade again, even if you like girls in short school dresses. “Can’t dip toes in the same water twice,” and all that. That adventure was life-changing rite-of-passage, it sort of got me onto the right track (no pun intended) so yeah, I think I’ll just leave it where it is. I haven’t got a travel bug or anything, I’m just interested in getting on with things now. 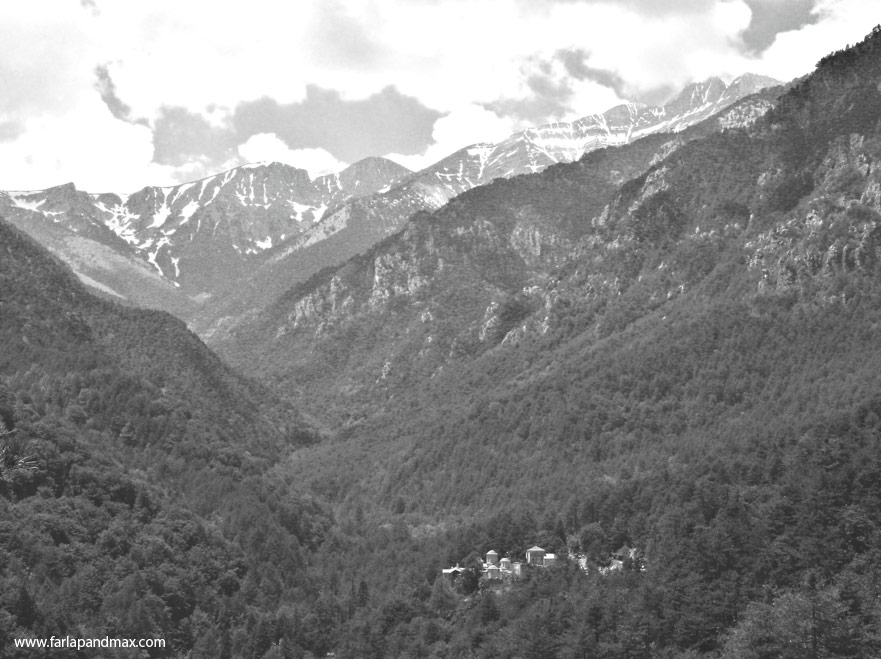 Max now has a day job and his caffeinated nights are full of pursuing this book project. Would you be part of the crowd who funds the fruition of this book? Visit Max’s blog, follow him on twitter or stop by his Facebook page: Farlap and Max.

If you’ve ever considered what’d it’d be like to ditch the 9-to-5, hop on your motorcycle, ride beyond the edge of society and live off the kindness of strangers, here’s a chance to review one heck of a case study. Here’s to hoping he gets the funding to finish the journey.

UPDATE: See the event photos and video here. “Evolve or Die.” A bold motto from the…