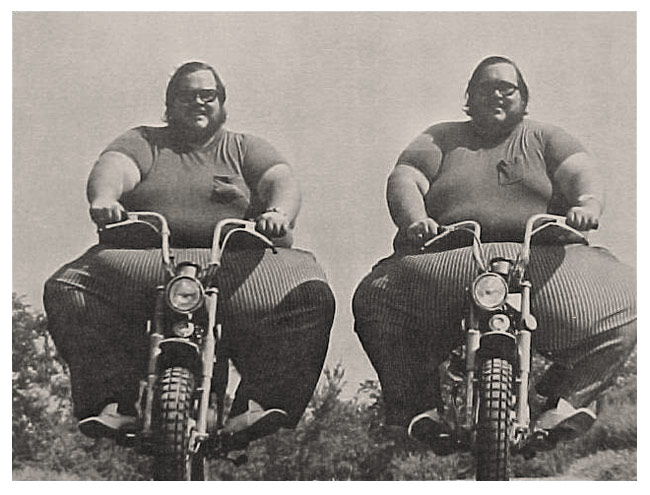 When we were little, we’d check out the Guinness Book of World Records from the library and marvel at the pics of the longest finger nails, the tiniest person or smallest bicycle. But it was the McCrary twins that probably made the biggest visual impact. Not only were they the world’s heaviest twins, they were astride little Honda motorcycles. 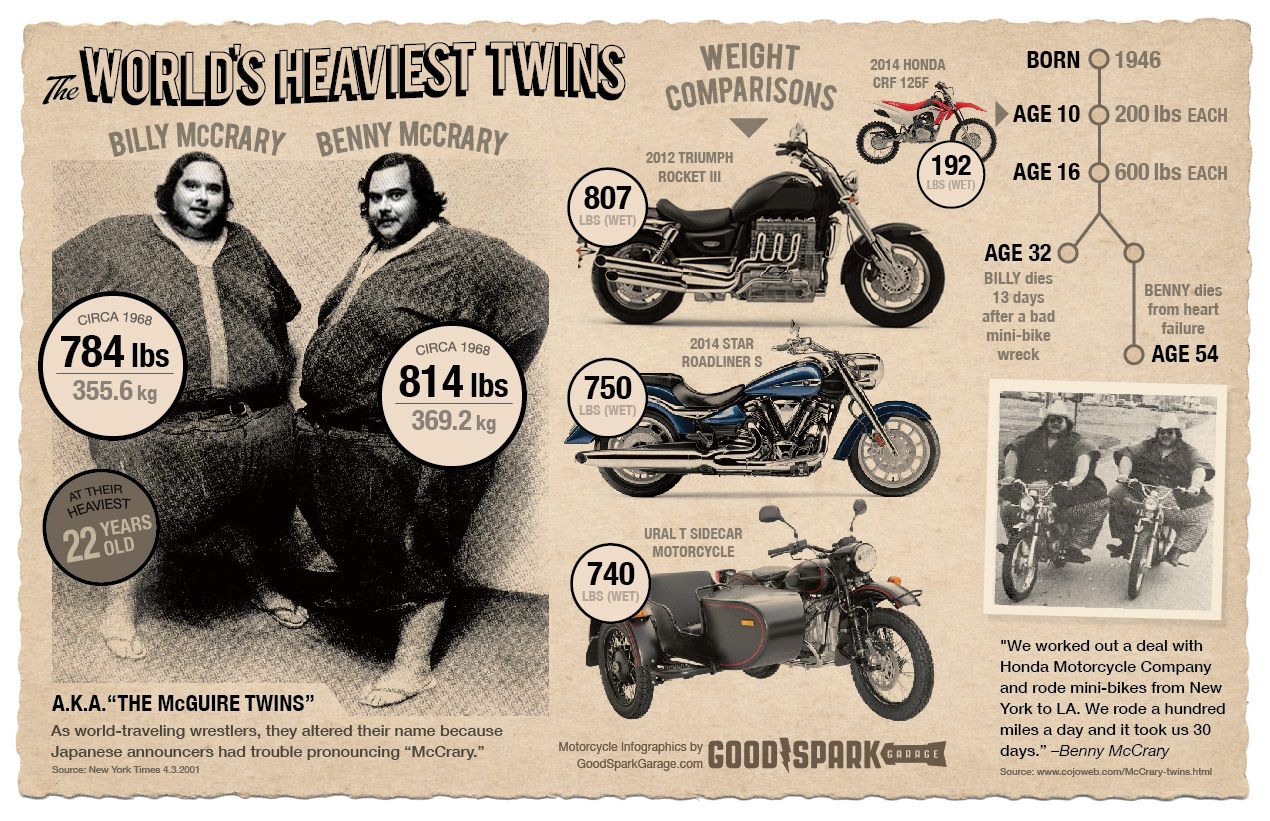 Here’s an infographic we’ve created to show the relative weight and scale of just how big these guys were. When Billy and Benny McCrary were born there were no signs of potential massiveness, but after the German Measles, their pituitary glands got out of whack. At ten years old they each weighed in at 200lbs. Their folks tried special diets and manual labor to work off the weight, but nothing helped. They grew to 600lbs each at 16 years of age. 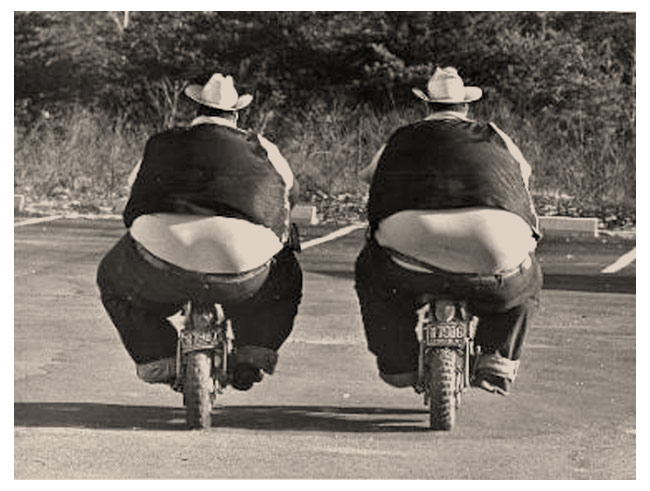 Their attention and fame led to an opportunity to ride mini-bikes across the country. Sponsored by Honda, they agreed to ride from New York to LA, presumably to show the durability of the bikes under the weight of the McCrary bros. It took them 30 days, averaging around 100 miles a day. Benny said they had a deal worked out with Holiday Inn, who provided rooms during the trip. Then, he said, “We’d ride into town and give autographs at a dealership for a couple hours.” 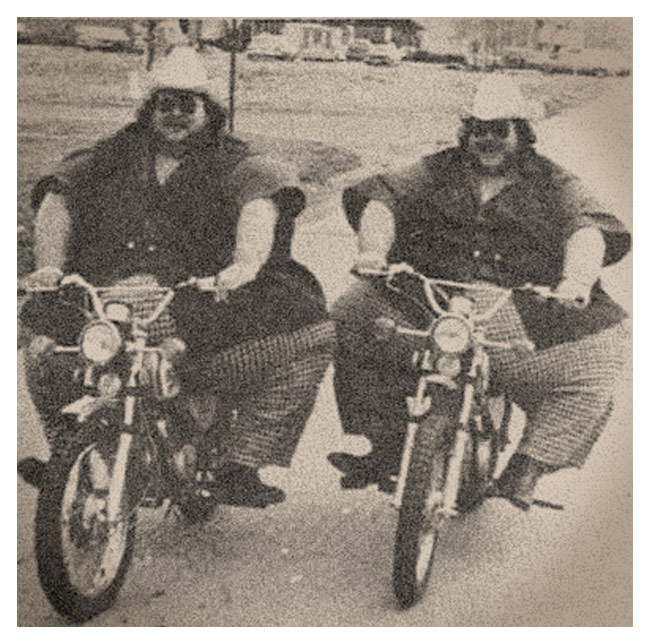 After fulfilling their cross-country trip obligations for Honda, wrestler Gory Guerrero offered them a gig in pro wrestling. He’d seen them in the press and thought they’d be perfect for the ring, developing stunts that had other wrestlers running at them only to dramatically bounce off. After Billy died in ’79, Benny was even paired with Andre the Giant a few times. 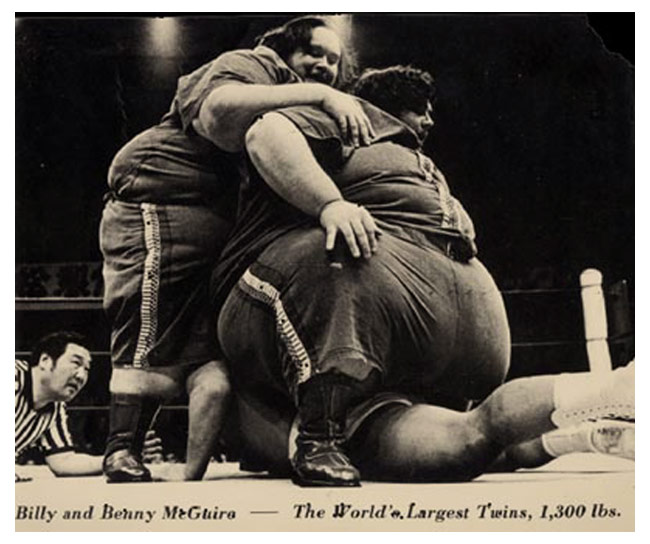 When they traveled overseas for wrestling, the Japanese announcers would pronounce their last name, McCrary, as “McQueery.” They didn’t like the anti-macho connotation that created so a member of their entourage suggested the McGuire Twins, since the name worked well for the McGuire Sisters. 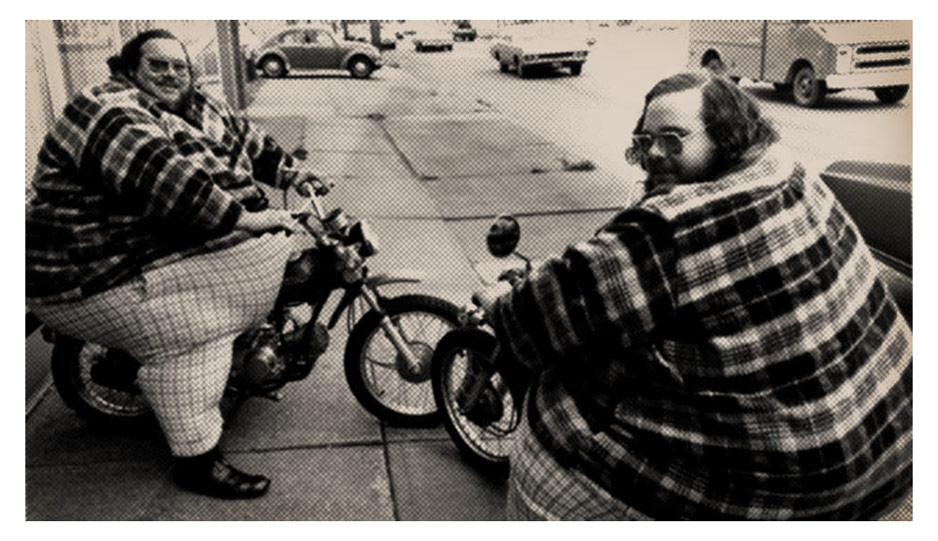 There’s not a lot of details to be found about Billy’s death in 1979, but reports say that he died of complications 13 days after a mini-bike stunt in Niagra Falls, Ontario. He was 32, leaving behind Benny, who’d live to 54 until succumbing to heart failure in 2001. 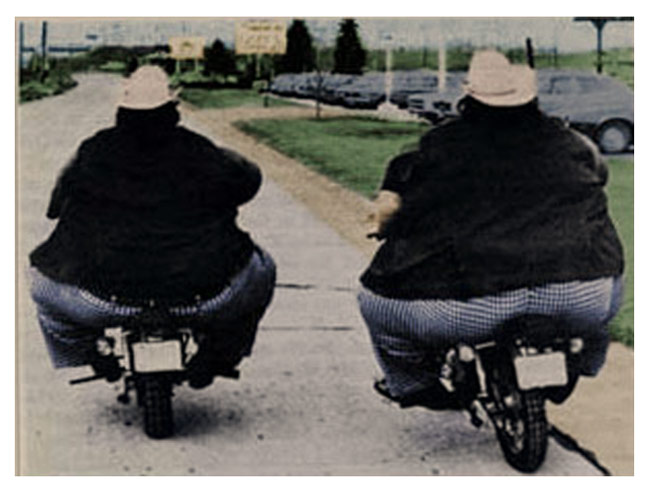 These guys led an interesting life and still resurface in pop culture. They’ve even played trumpets in Vegas while go-go dancers danced around them…400-pound go-go dancers. Benny went on to become a golfer working for the Christian Golfers Ministry where some say he had a wicked chip shot.

Back in their hometown of Hendersonville, NC, you’ll find a 13-foot wide headstone that spans the twins’ plots in the Crab Creek Baptist Church Cemetery. It would be an incomplete, 3-ton gravestone without the engraved Honda mini-bikes next to each of their names. 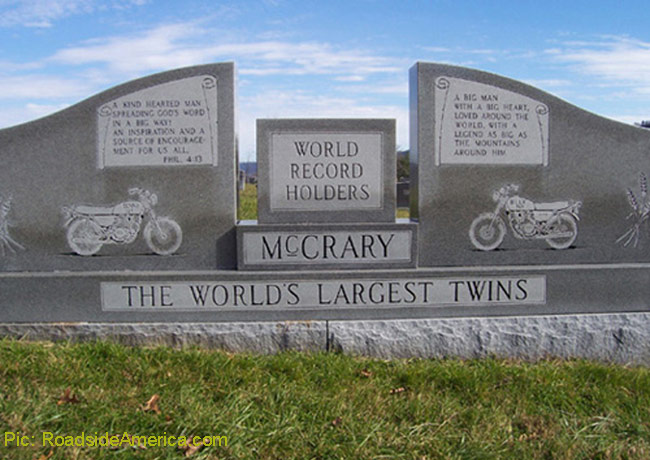 Is that a Norton? What year Triumph is that? That'n old BSA? Just a few of…