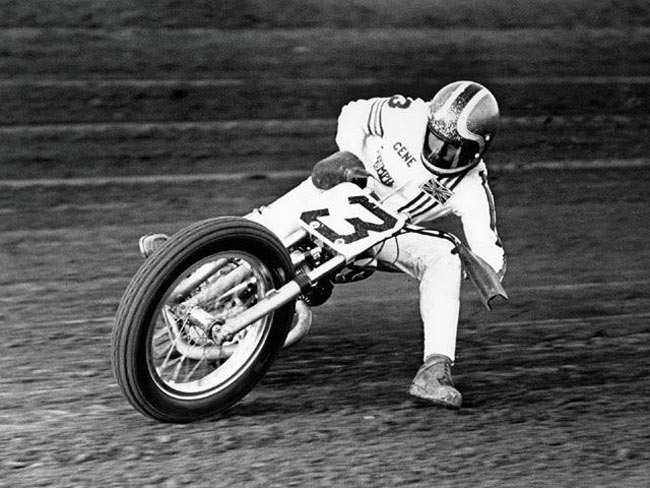 When a picture of a crossed-up motorcycle catches our eye, we stop, stare and admire. When the front wheel of a motorcycle tries to get perpendicular with the back wheel at high speed, it creates entertainment. 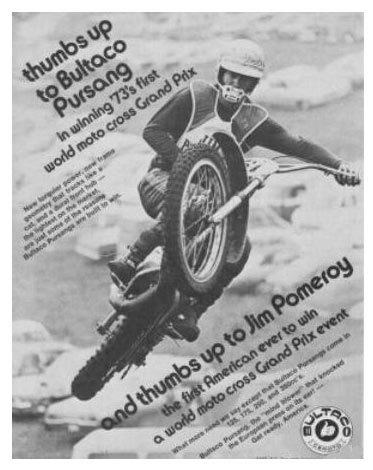 I mean, the concept is strange, really; one wheel is facing down the track and the other is spinning madly toward the infield. Mortals would simply slow down and lean. Motorcycle racers contort themselves, adjust weight distribution, and steer with the throttle simultaneously to perform the lock to lock stance that photographers and bystanders eagerly await. Variations of being crossed up are found in most types of motorcycling. Most cases are a thing of beauty, like Jim Pomeroy’s motocross cross-up.

For this article, we’ve highlighted some of our faves on tracks that are flat, which allows riders to carry much, much more speed than Jim’s leaping Pursang. 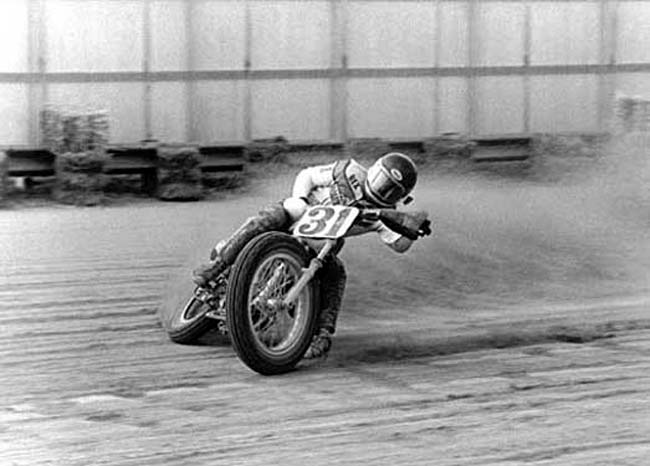 The above pic of Rex Beauchamp at Louisville is touted as “The Greatest Photo in Racing” in a 1980 article by Joe Scalzo in Motorcyclist Magazine. Legend has it that it was taken by a corner worker with direction given by the credited photographer, Dan Mahony (Dan worked a camera further down the track). 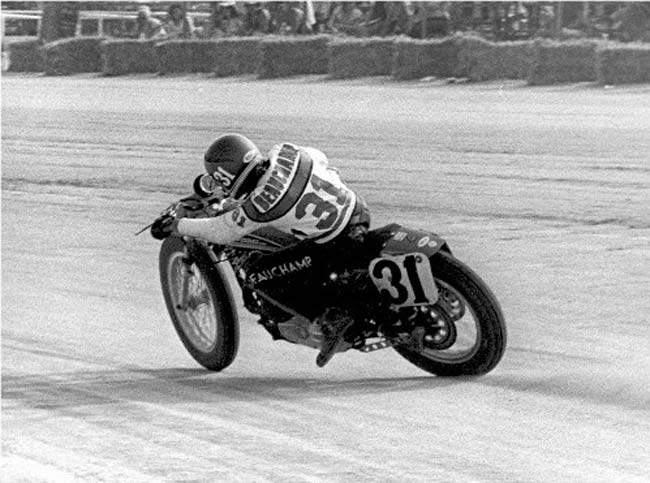 High speeds, loose surface, earthen roost, thumpy horsepower and names cut out of leather…how is this not cool? Oh, and hay bales for safety. 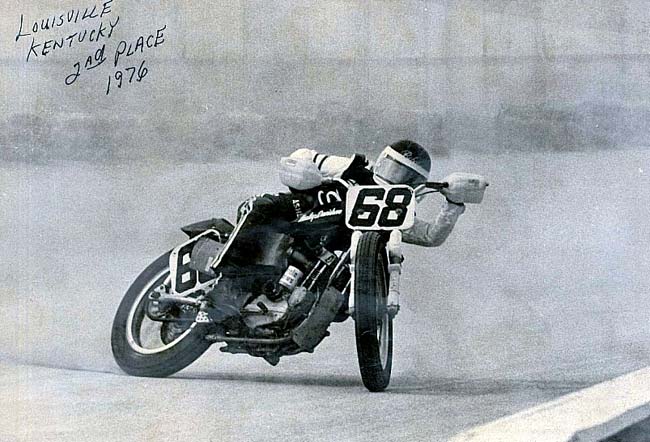 I’m not sure who took this pic; wish I did. There’s some credit due for capturing Steve Freeman during this hung-out moment. (Please note: His feet are on the pegs, man!!) 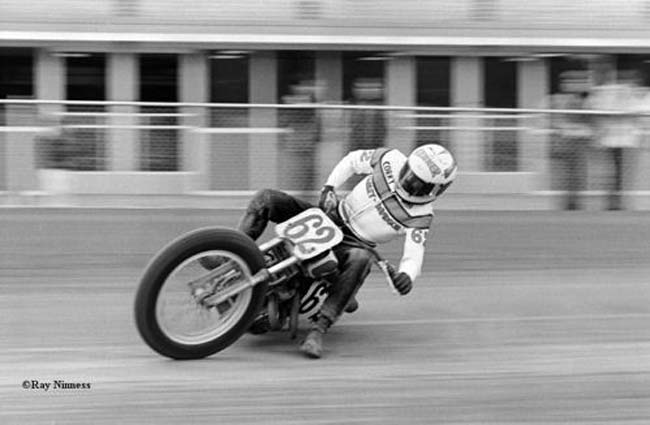 It’s hard to forget Corky Keener’s name, but if it was Bill Smith, he’d still be remembered for his successful racing career. He was a member of the Michigan Mafia and successful Harley-sponsored flat tracker. Above is a great low-slung shot via photog, Ray Ninness. 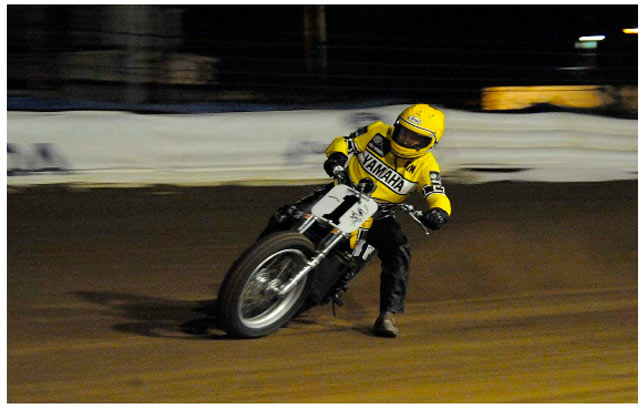 This photo, found at Motorsport Retro, is special to us ’cause we saw this moment live at the Indy Mile in 2009. We knew King Kenny would be taking three laps for the fans, but we didn’t know he was going to light up the back tire on the first turn and keep the throttle pinned the entire time. I don’t think anybody did. We gripped and peered through the infield chain-link fence to watch him screeeeeeam out of Turn Four toward a roaring crowd in the grandstand. Maybe we shouldn’t have been surprised at how natural it came to him, even if he hadn’t been on a flat tracker in a good while. The two pics below show Roberts in his #80Y days, captured by Photo Tim. 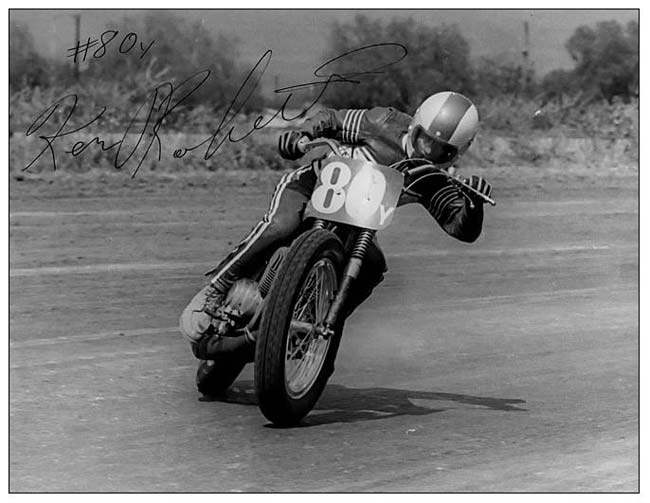 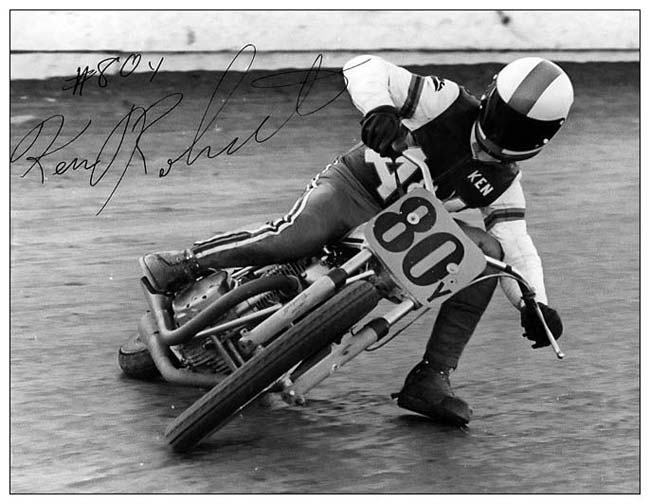 Photo Tim developed a knack for racing photography when he was 12 years old and was published in major magazines when he was in his mid-teens. Here are four more of his well-timed black-n-whites of flat trackers… 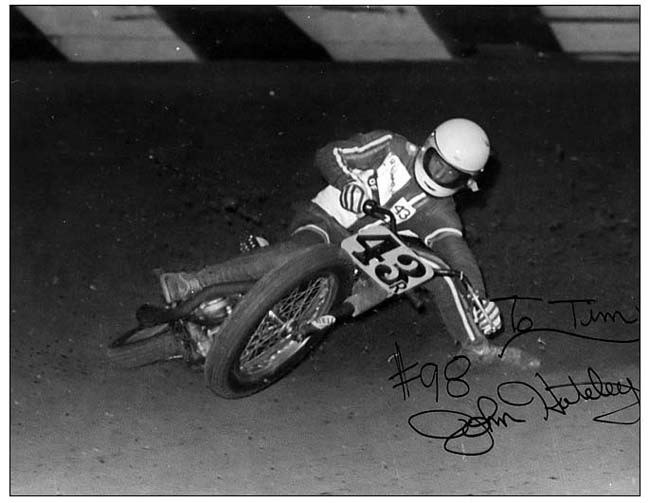 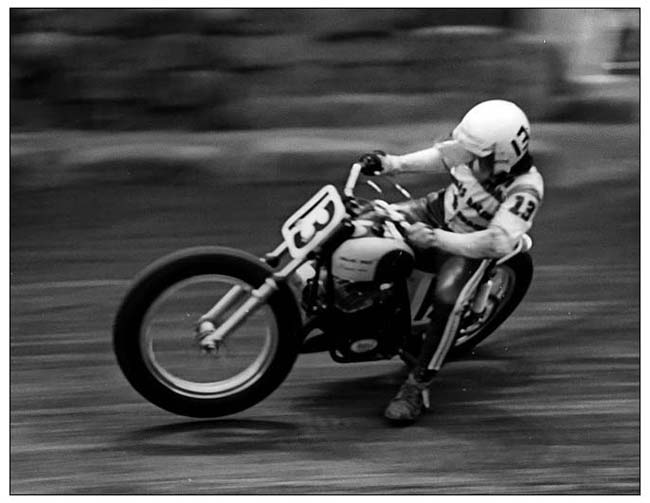 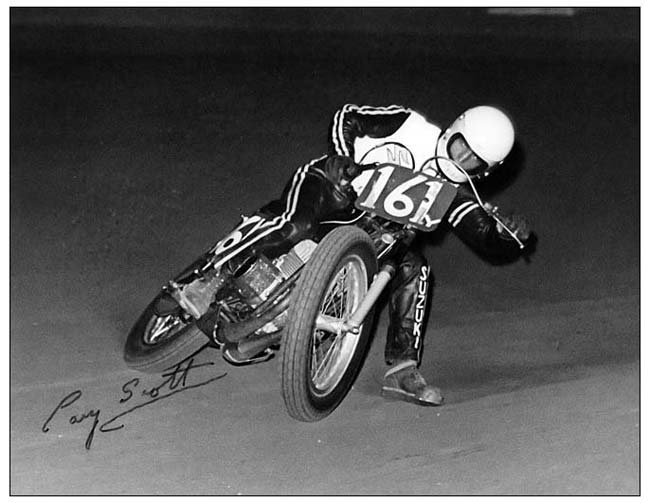 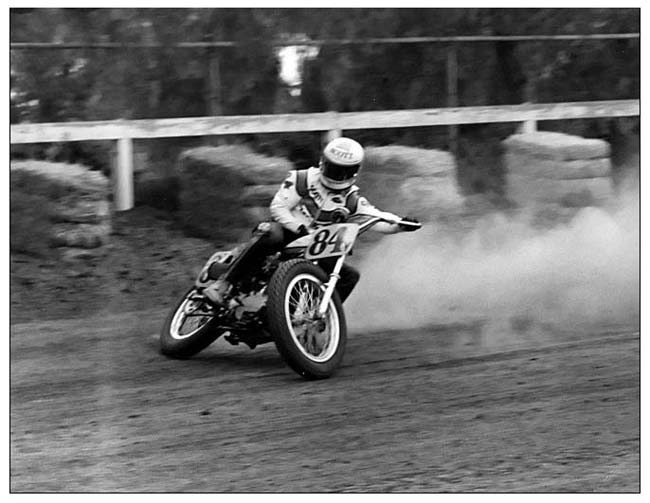 In more recent days, Supermoto racing has supplied a wonderful new variation of being crossed-up and skittering across both dirt and asphalt. This is a screen still of a video featuring Spaniard Dani Ribalta dragging elbow. (Nope, he did not crash.) 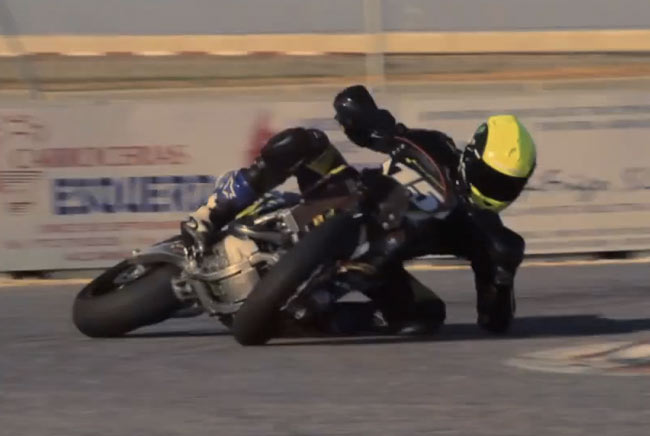 During the launch of the 2008 Ducati Hypermotard 1100, Ruben Xaus quickly became acclimated with its handling. This shouldn’t be possible. 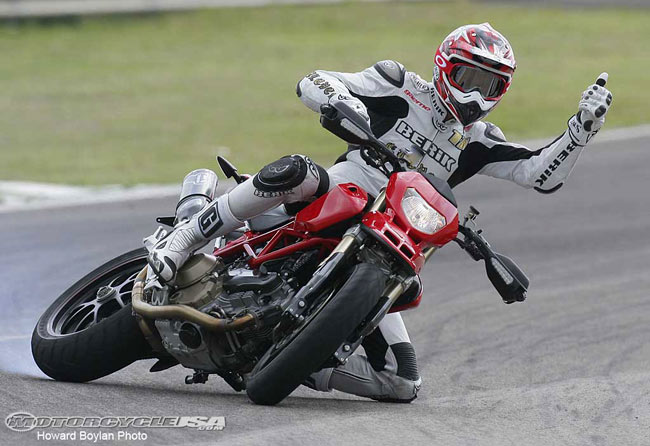 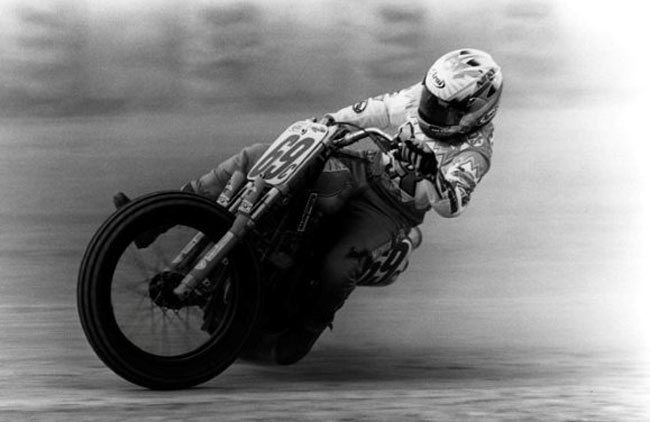 We dig this pic. We’ve heard it was posted on Cycle World’s twitter feed at one time and that it’s an unfinished start to a photo feature (text would go on the right in the faded area). Whatever its intention, this is really cool, left-foot-on-peg, right-foot-up slidin’ by the Kentucky Kid. 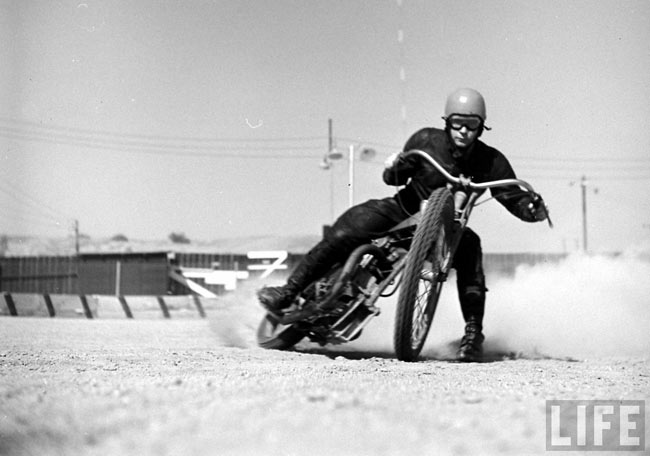 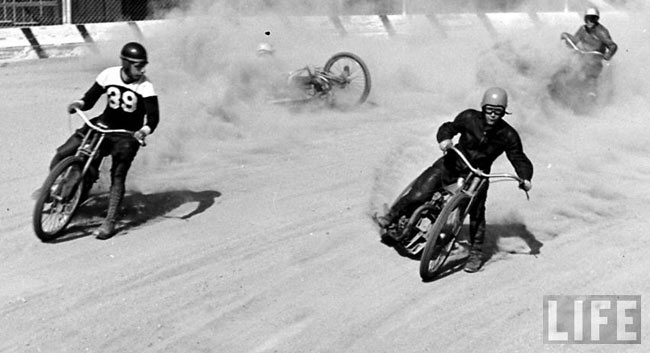 The two photos below were taken by Scott Daloisio of Speedway Motorcycle Photos. The top one is at Carlsbad and the bottom one is from the 1987 US Nationals in Costa Mesa. The racer, Bobby “Show Time” Ott, is remembered by one fan to often be “hanging off his bike so much that his butt almost scraped the ground while he was crossed up.” 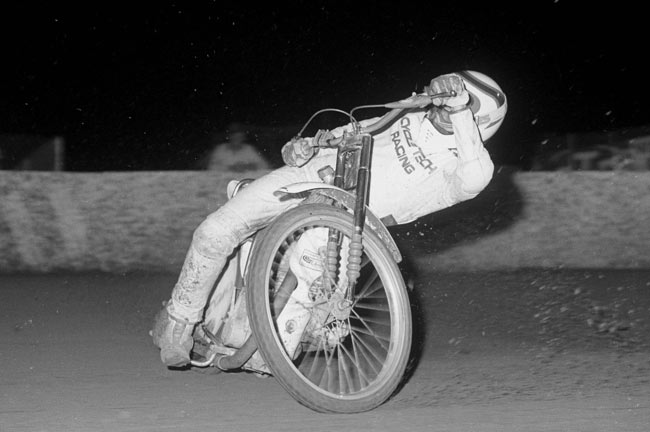 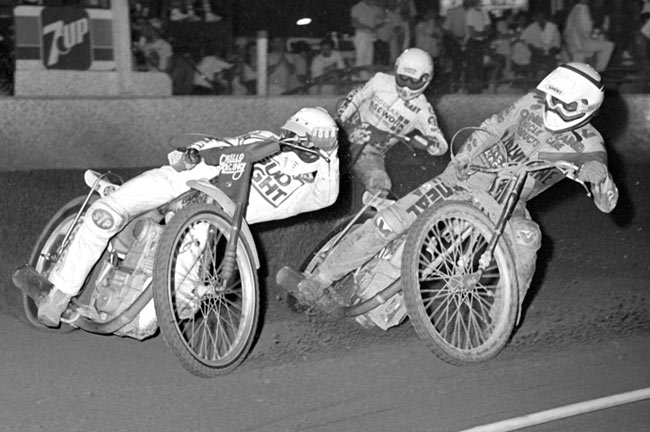 It feels appropriate to close with Gary Nixon’s understandably popular photo. It’s one of motorcycle racing’s most colorful characters creatively showing off his skills and humor at the same time. 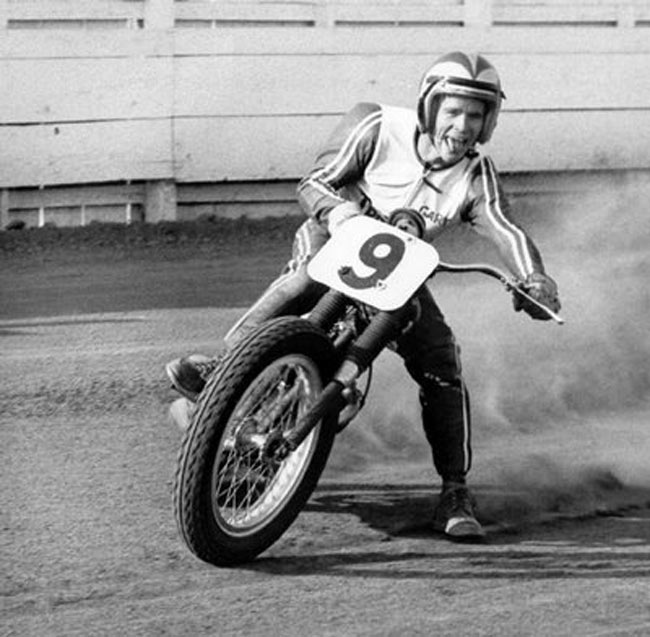 We have a poster of this pic that Gary autographed for us; he first signed his name, then wiped his cigarette ashes out of the way to add his famous “#9.”

John Penton and His Motorcycles

If you've got kids that are into motorcycles, take a moment and introduce them to the…