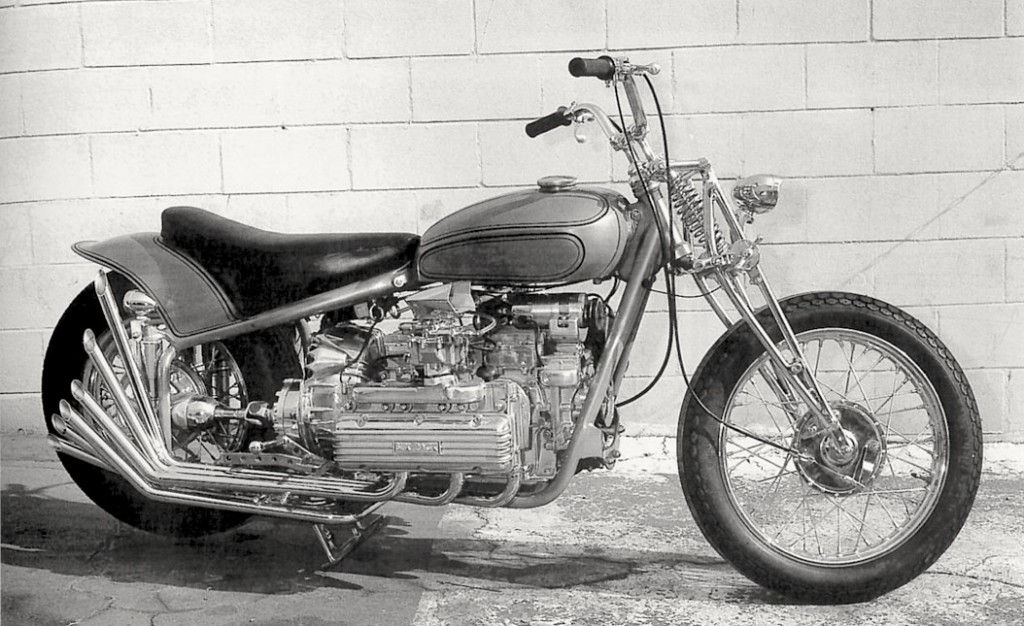 Even if it doesn’t make sense, we like seeing how creative minds followed through on using car engines to power a motorcycle. There are some mainstream manufactured examples out there, but here’s a look at some funky-cool, car-powered bikes that caught our eye.

The Corvair-powered, shaft-drive “Six Pack” uses a 1941 Indian frame. It was built by Norm Grabowski and pinstriped by Dean Jeffries. Norm would later add a sidecar made from a narrowed fiberglass T-bucket, which required relocating the crazy pipes and matching the bike’s custom paint. (Pic found here.) 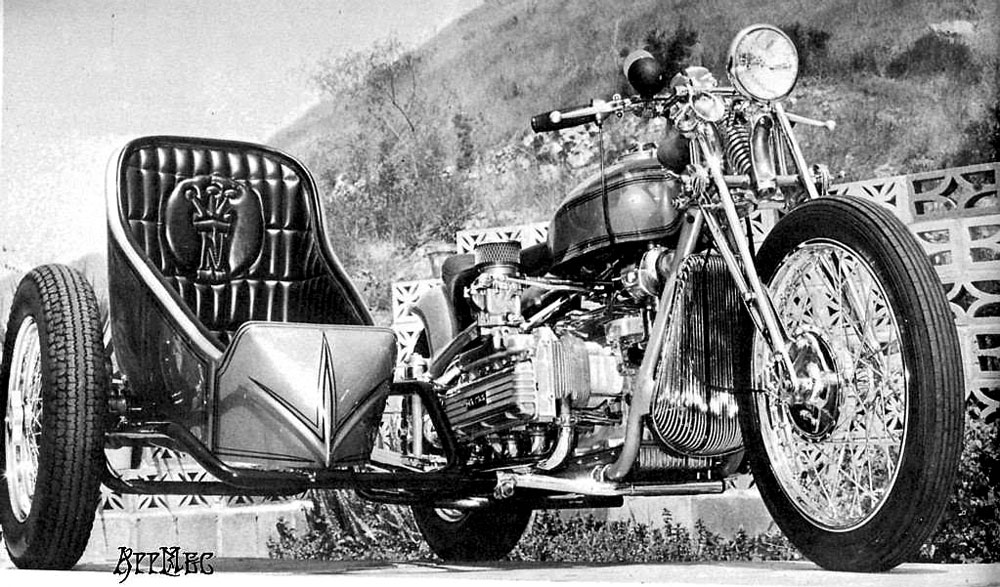 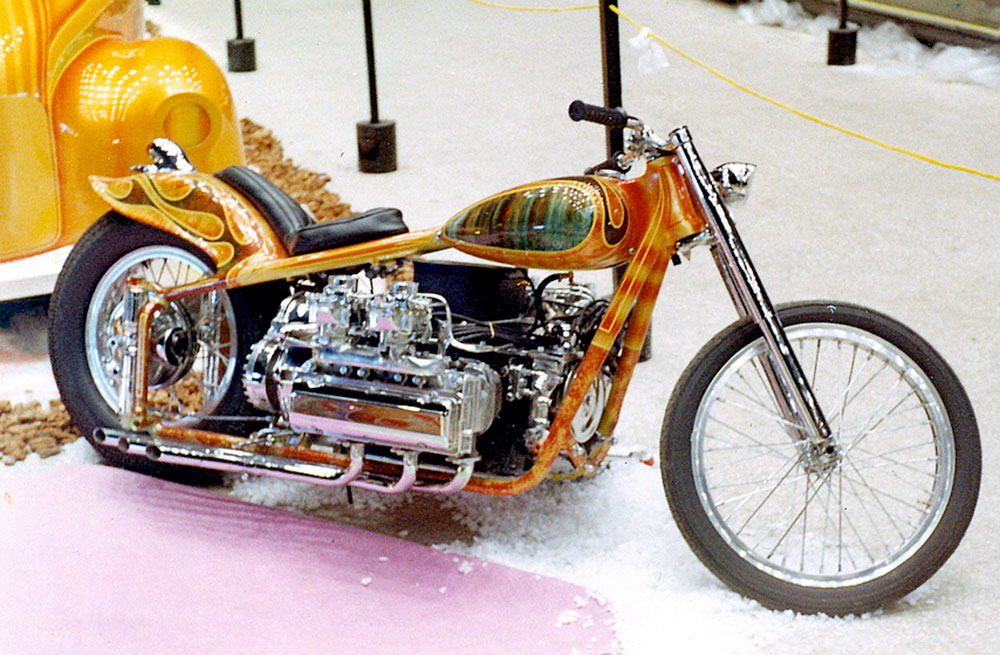 The Chevrolet Corvair was powered by an air-cooled flat-six boxer engine that became popular with amateur aircraft builders. Chevy made the Corvair from 1960 to 1969, the only mass-produced American car with a rear-mounted, air-cooled engine.

Another Corvair creation with late-60s flair (below) is the “Corvair Trike” built by Tom from AEE Choppers. That’s Ed Roth in the background rolling around one of his custom trikes (pic: Street Chopper Mag 1969). 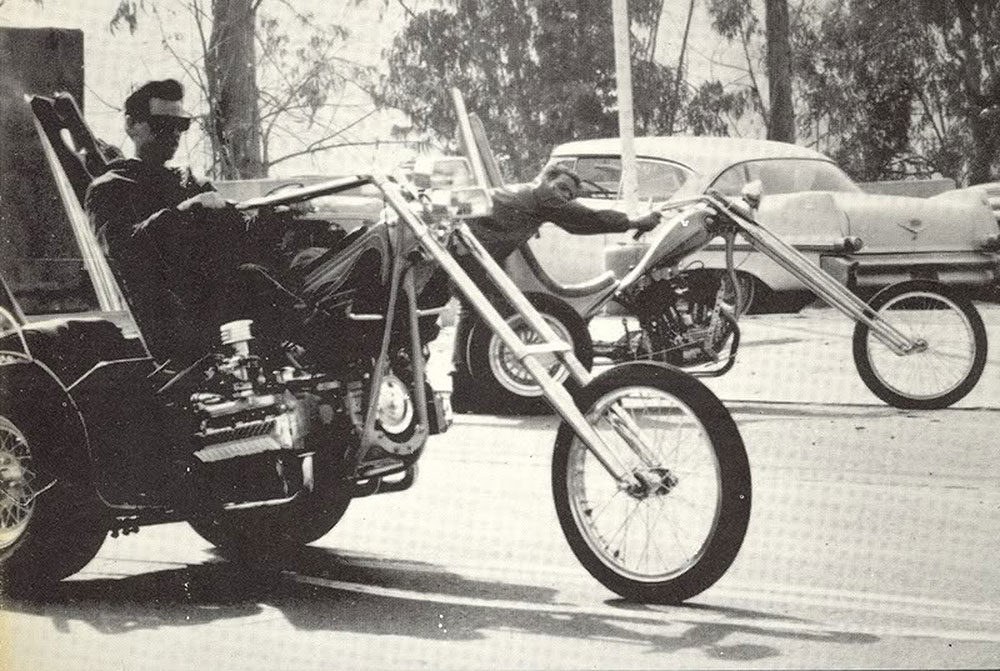 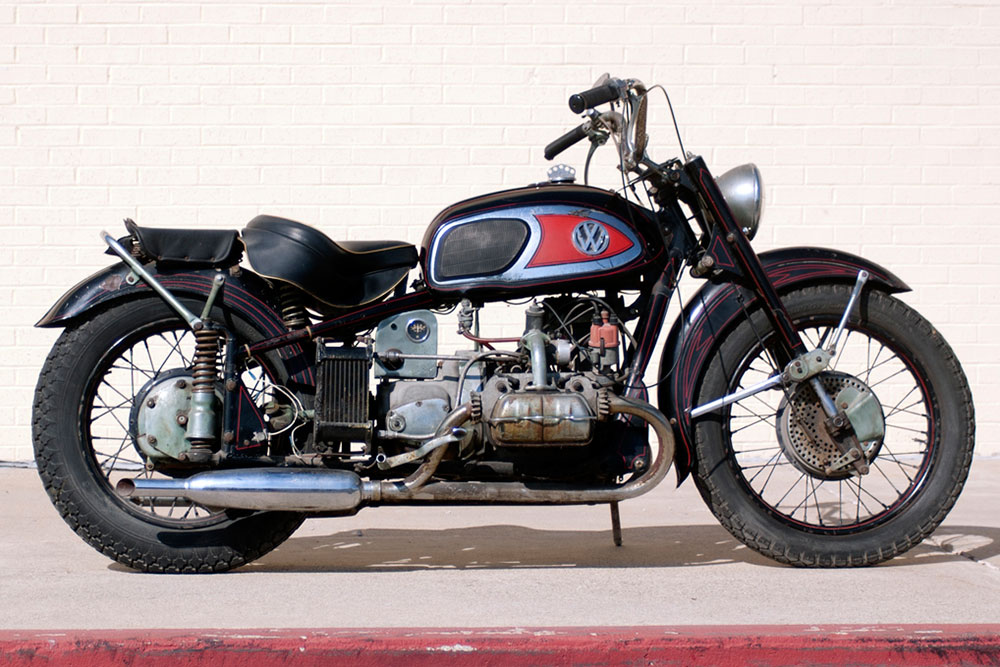 The XAVW built by Von Dutch that was recently ‘picked’ by Mike Wolfe of American Pickers, is powered by a flat-four 1200cc VW engine. It’s made up of a shaft-drive Harley-Davidson XA with Moto Guzzi parts and a Honda CB450 tank. While a bit dirty and a little rough around the edges, its legend and ingenuity rank high for us in moto-folk-art status. 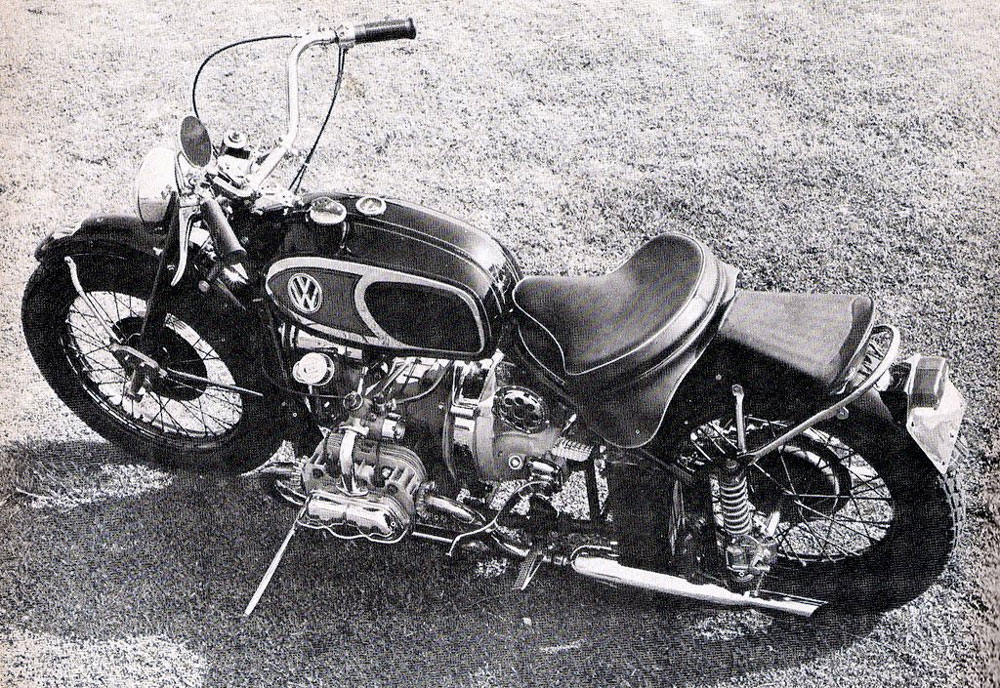 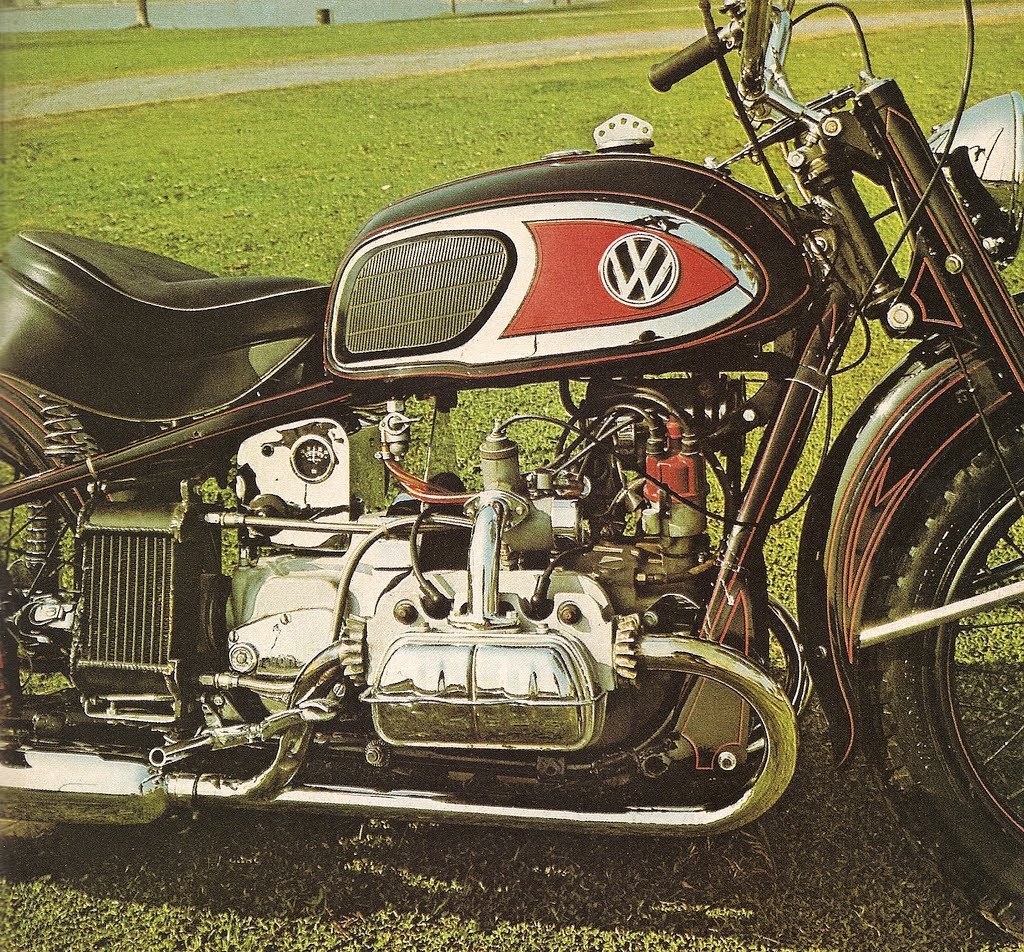 The “Drag-Waye” slingshot drag bike went through a few variations and mods over the years, but this set-up is a fave of ours (below). 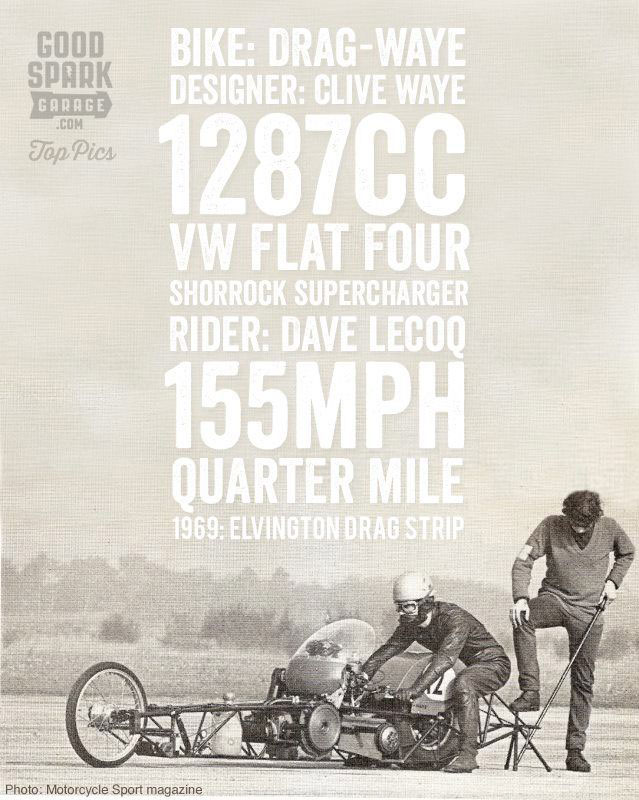 British motorcycle racer Angus MacPhail was the man behind the Jade Warrior (below). It was powered by an inline 4-cylinder based on a supercharged Ford Cosworth. He said it made 400-500 horsepower, clocking less than 8-seconds in the quarter mile (sans nitro!). Click here to see video featuring this machine. 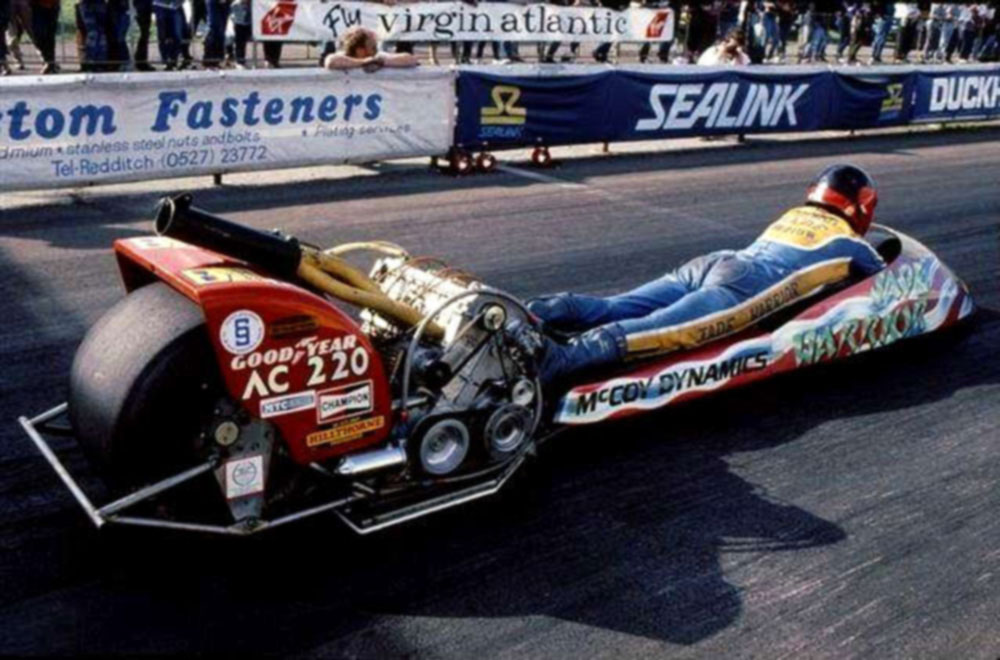 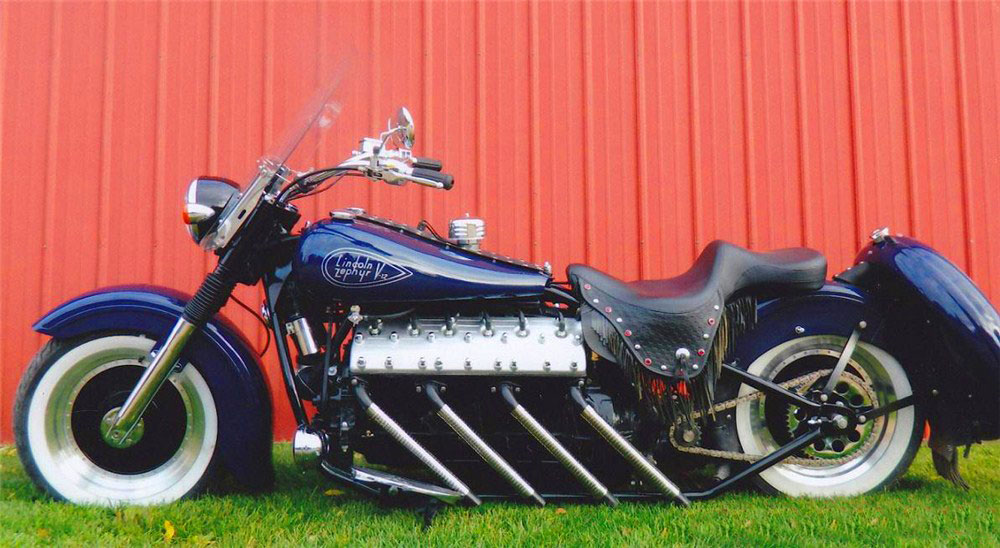 Dale Olson of Olson’s V-8 Flathead Motorcycles, built a couple Lincoln Zephyr-powered beasts. The late-1930s/early-1940s V-12 flathead engines were crammed into the frame with single-speed direct drive. Here’s a vid of one of ’em revving up. 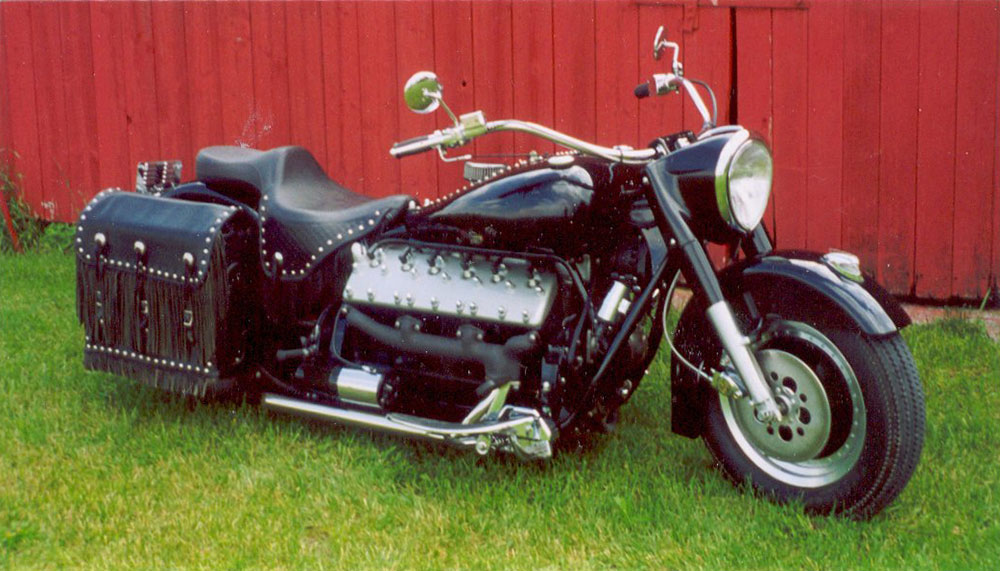 Olson’s company specialized in V-8 motorcycles, “We take the old 60hp Flathead Ford V8 and give it a full rebuild plus a whole list of fancy new parts including a Mallory distributor. The frame is custom built from the ground up to tightly wrap around the powerplant providing a nice clean look that is as easy on the eyes as it is to ride.” 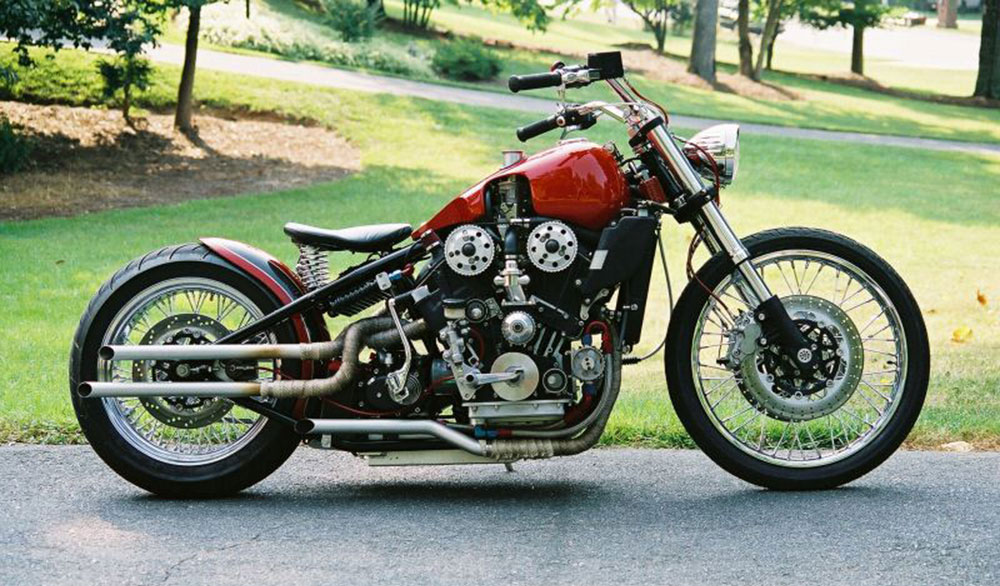 Chris Barber’s AlfaBeast (above) is a work of art while employing some serious technical wizardry to get the 2.5L V-6 Alfa Romeo engine mated up to the Kraftek frame. A Harley-Davidson 4-speed tranny puts the power to the back wheel, but required new shafts, bearings and gears. The front end is from a Kawasaki ZXR750. More info found here. 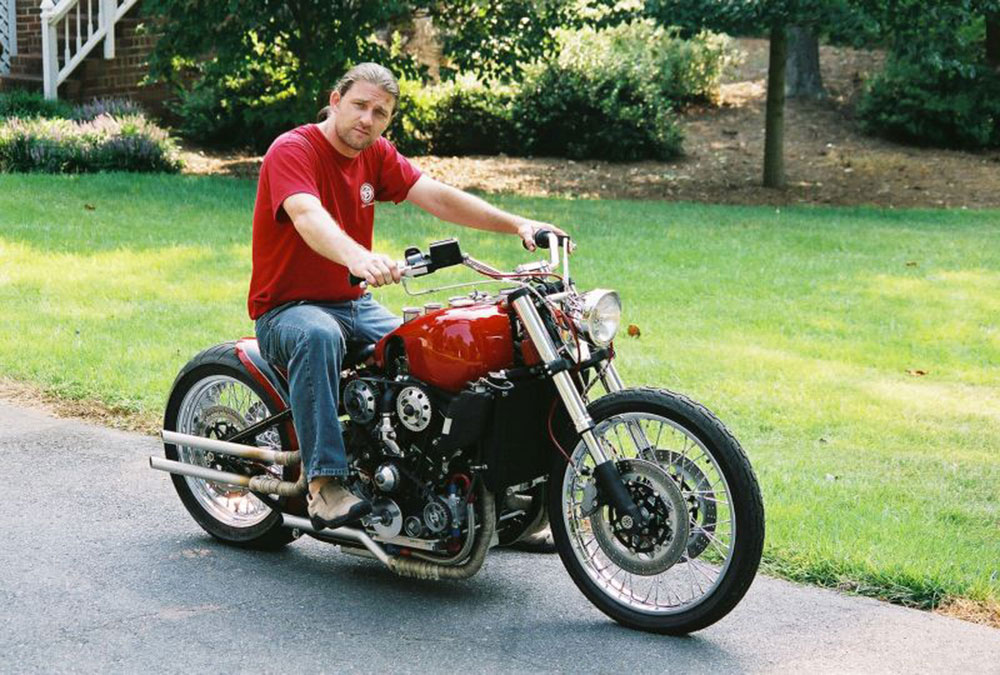 In the world of custom motorcycles, it’s neat to see people completely immerse themselves in their projects. Folks could call these guys crazy, but we gotta give ’em kudos to having an idea or challenge in their head and seeing it through to the asphalt.

We can't resist a good ol' black-n-white photograph of a vintage motorcycle in action, especially if…

Just seven miles from Pole Day qualifications at the Indianapolis Motor Speedway on May 19th, motorcycle…