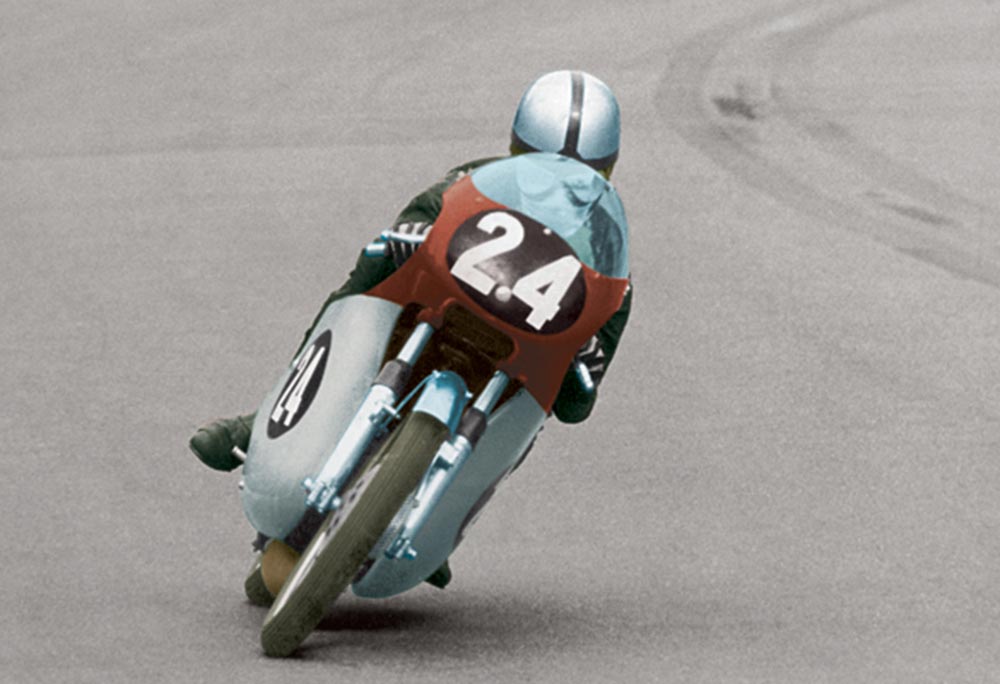 In motorcycle racing, you gotta get small to go fast. These racers try to shave off tenths and hundredths of seconds by staying tucked and wrapped around their bikes. At full throttle down the straight, your helmet could act like a drag racer’s parachute. Have a look and admire the effort these guys put into getting aerodynamic.

Above: The Yamaha team at the 1961 Isle of Man TT race, the first year Yamaha entered the world championship. At the time, they and the MZ team were the only 2-strokes in the 125 and 250cc classes. 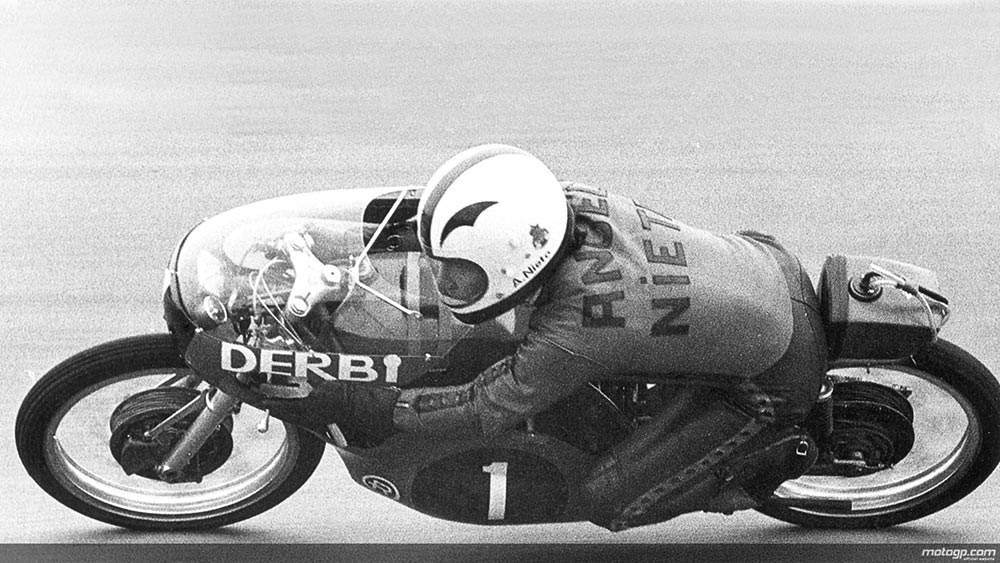 Above: Angel Nieto tucked in behind the windscreen of his 50cc Derbi GP racer. This guy has logged 90 victories in various levels of Grand Prix racing and won 12+1 world championships (he’s superstitious). This guy knew how to go fast, even on a 15HP motorcycle! 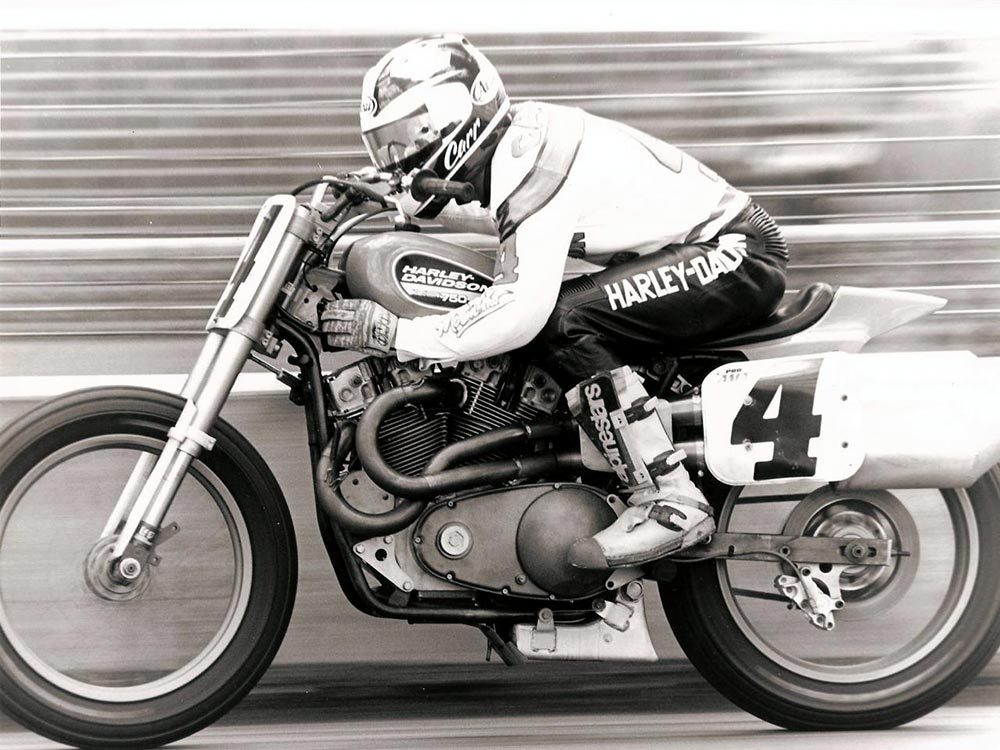 If anyone knows how to get small and go fast, it’s Chris Carr. This ain’t a jab at his physical stature, his bragging rights extend to holding a land speed record and becoming the first motorcyclist to exceed 350mph. This guy can make the best flat track racers look slow. 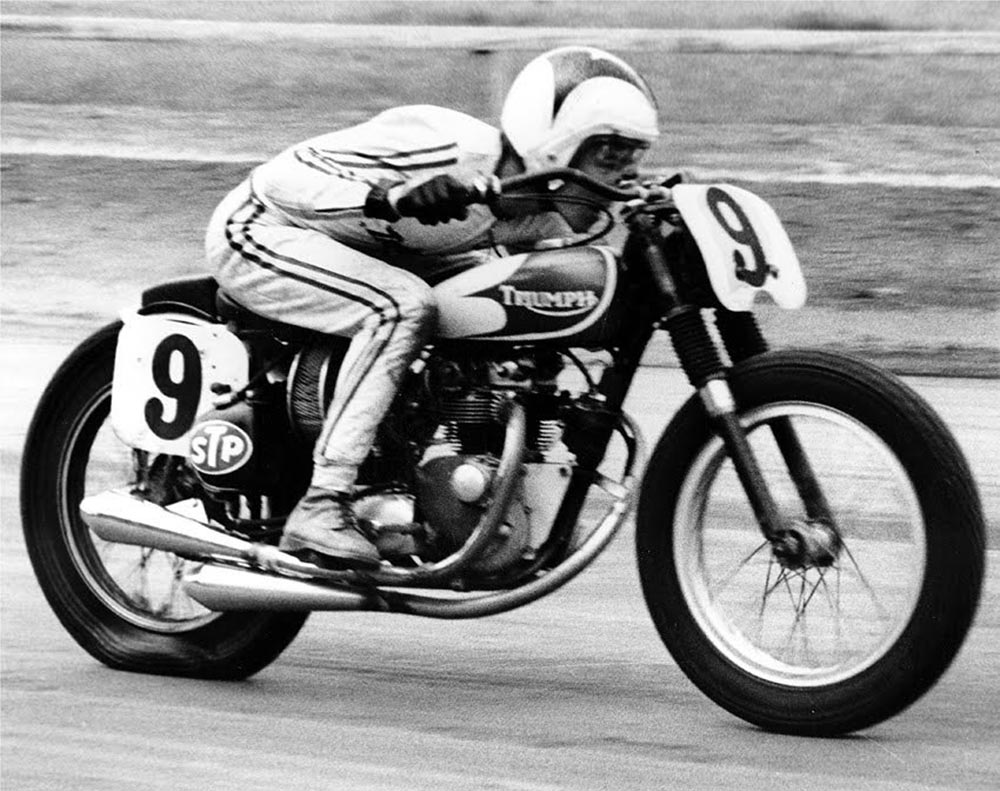 Gary Nixon was a fun guy to watch, on and off the track. Here he is in 1969 puttin’ power to the rear wheel, hugging the tank with his knees and keeping his nose to the handlebars. We also featured an iconic shot of Gary in our “Crossed-Up Motorcycles” story. 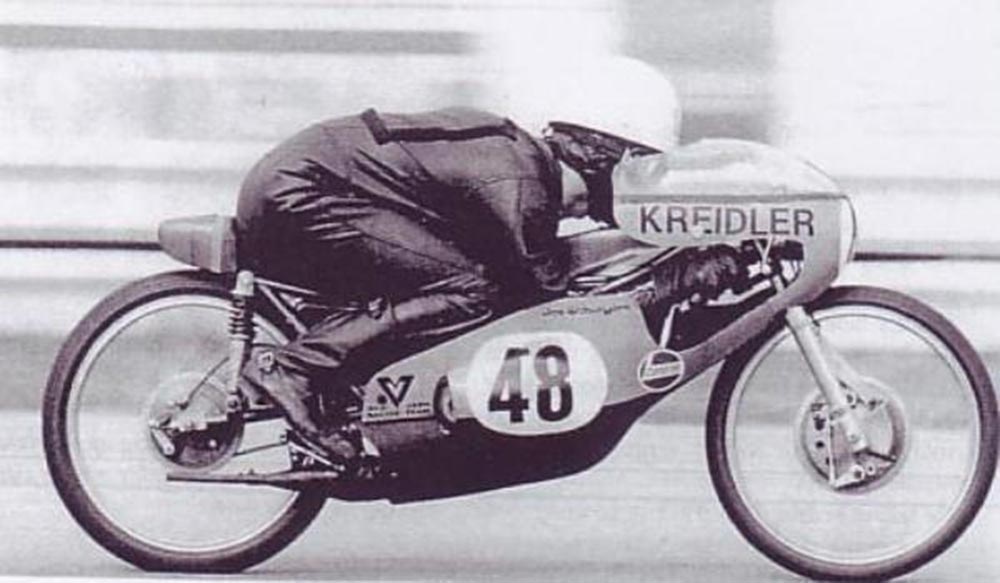 You’ve heard of Jarno Saarinen, the only Finn to win a World Championship in motorcycle racing. Here he is gettin’ as small as he can on a Kreidler 50cc at the Monza GP in 1971. 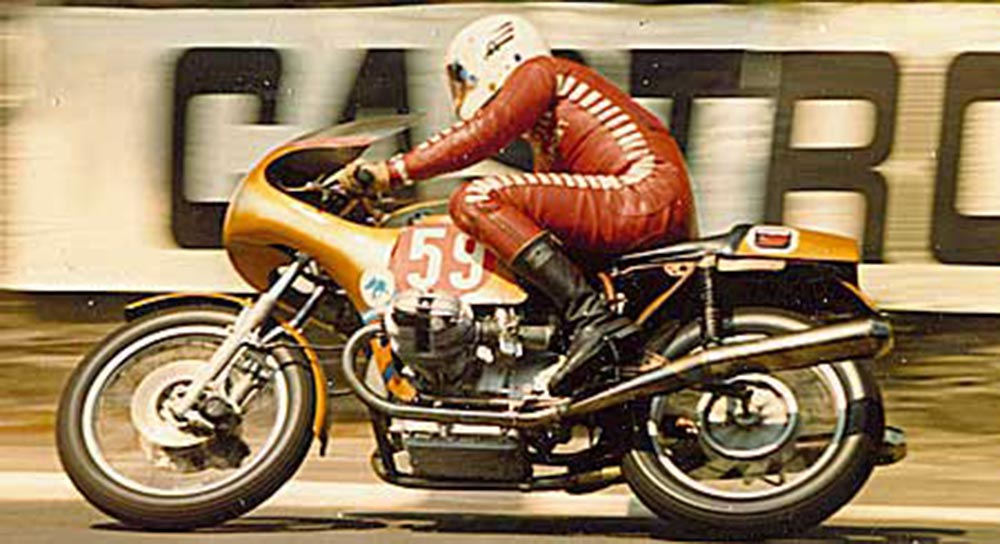 Even tall guys have to get small. Pictured above is 6ft-2in (190cm) Helmut Dahne going elbows-to-knees so his BMW can pick up speed at the 1976 Isle of Man. 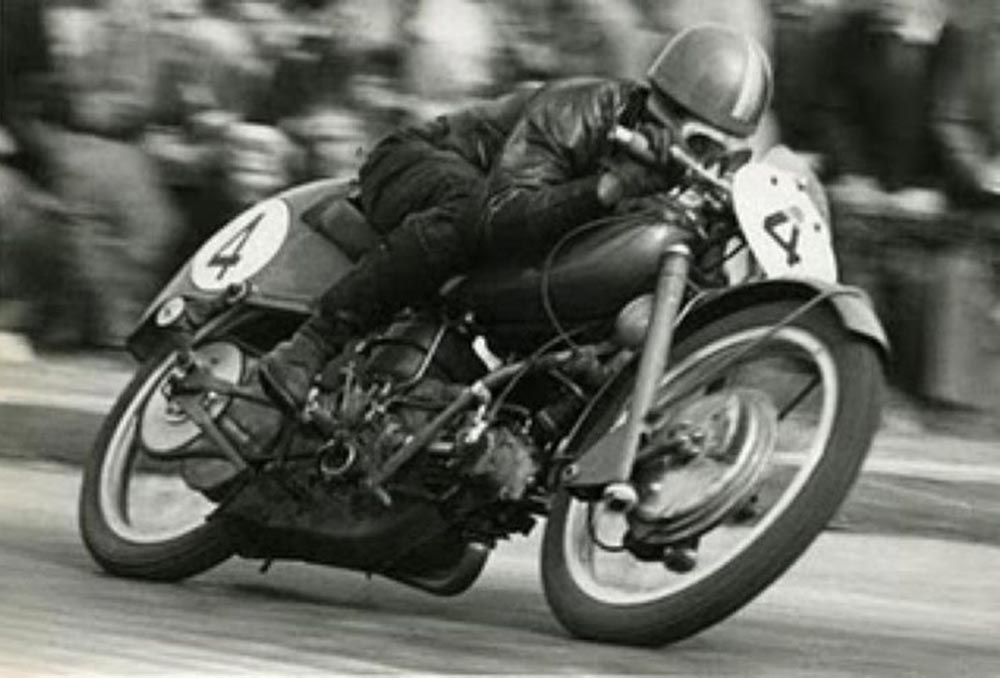 Above: This guy was known as the Black Devil. Some say it was his coal-black hair, some say it was his “diabolical riding style.” Either way, ol’ Omobono Tenni was talented enough to win the 1935 500cc Italian championship and be the first Italian to win the Isle of Man TT (1937) in the Lightweight class. He was a Moto Guzzi man from 1933 to 1948. 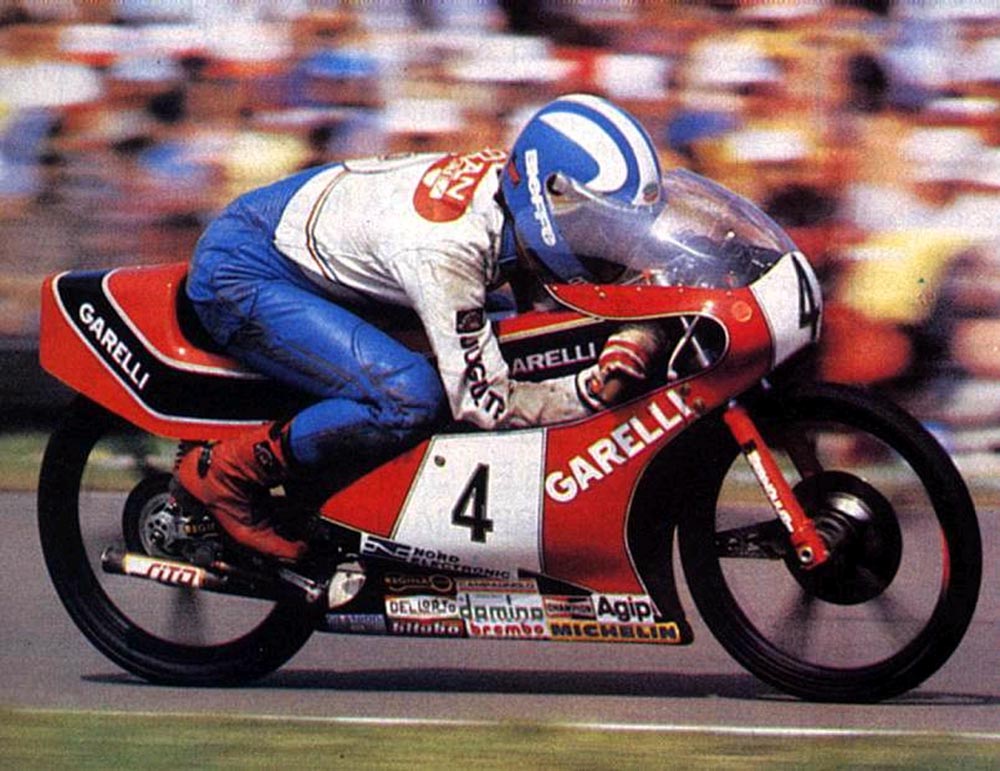 Here’s Ricardo Tormo on the the Garelli Corse race bike; he’d go on to win the last ever 50cc Grand Prix race in 1983 (they were replaced by the 80cc class in ’84). 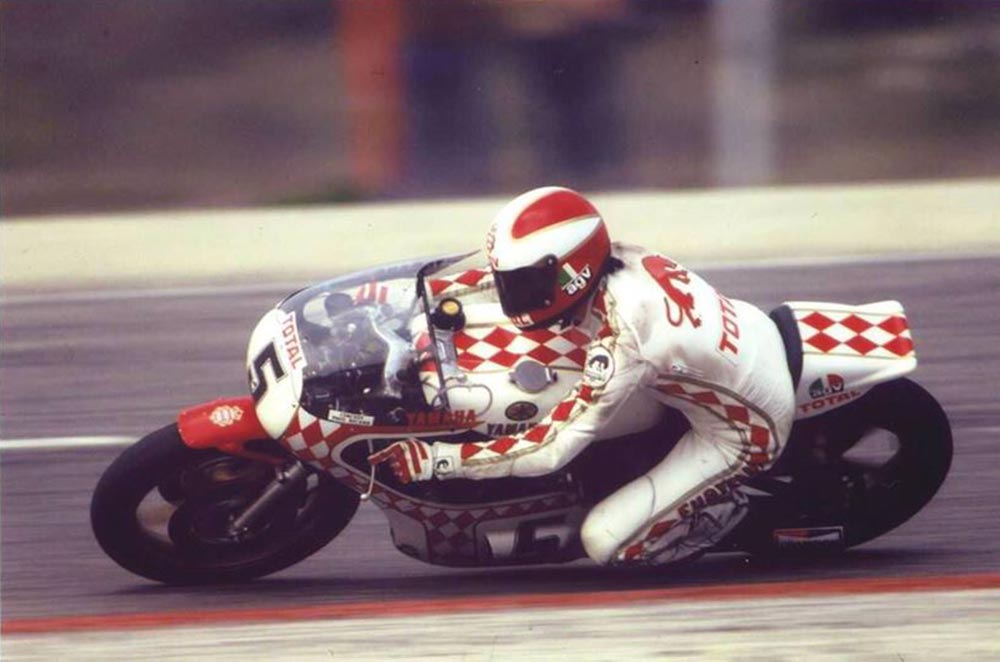 If you’re gonna be dragging knees and reaching crazy-high speeds in front of hungry racing fanatics, why not get creative with your leathers, helmet and livery? That’s what Hubert Rigal did on his TZ750. 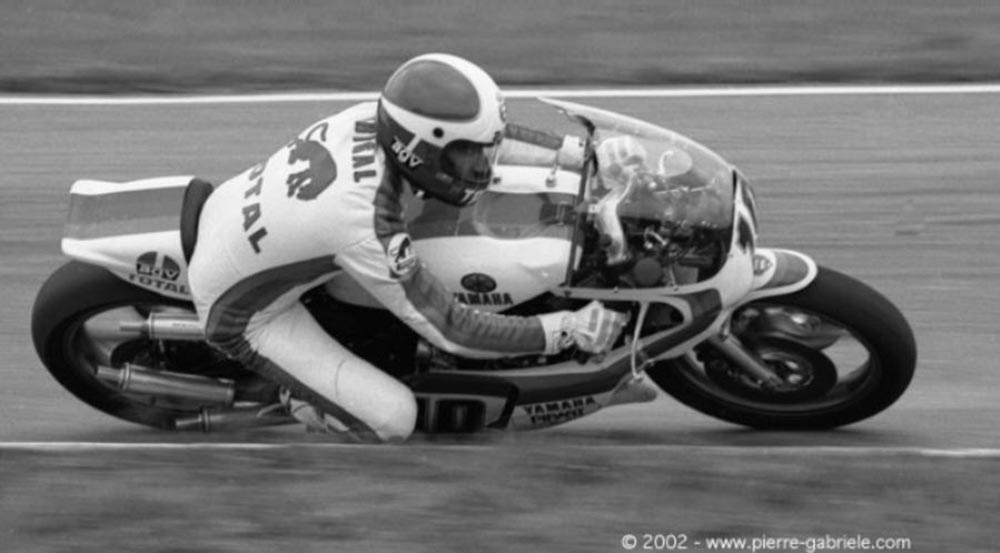 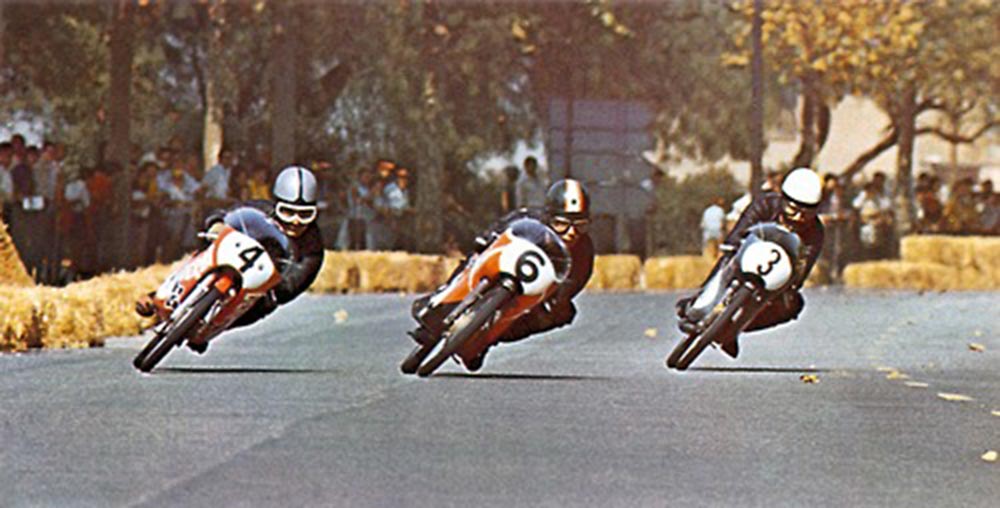 What a beautiful shot of these guys crouched down and trusting the skinny rubber on their 50cc racers. On the left is Salvador Canellas, who is also pictured at the top of this article. He was the first Spanish rider to win a Grand Prix, which took place at the 1968 125cc Spanish GP.

Going fast is the result of umpteen things: tuning, aerodynamic bodywork, money, etc., but the person at the controls has to know when to tuck and get outta the way of the wind. It becomes a strategic dance with the bike to let it charge ahead without impeding its power.

Tucked back inside Turns 14-17, Ace Corner at Barber Motorsports Park is a charming chunk of…