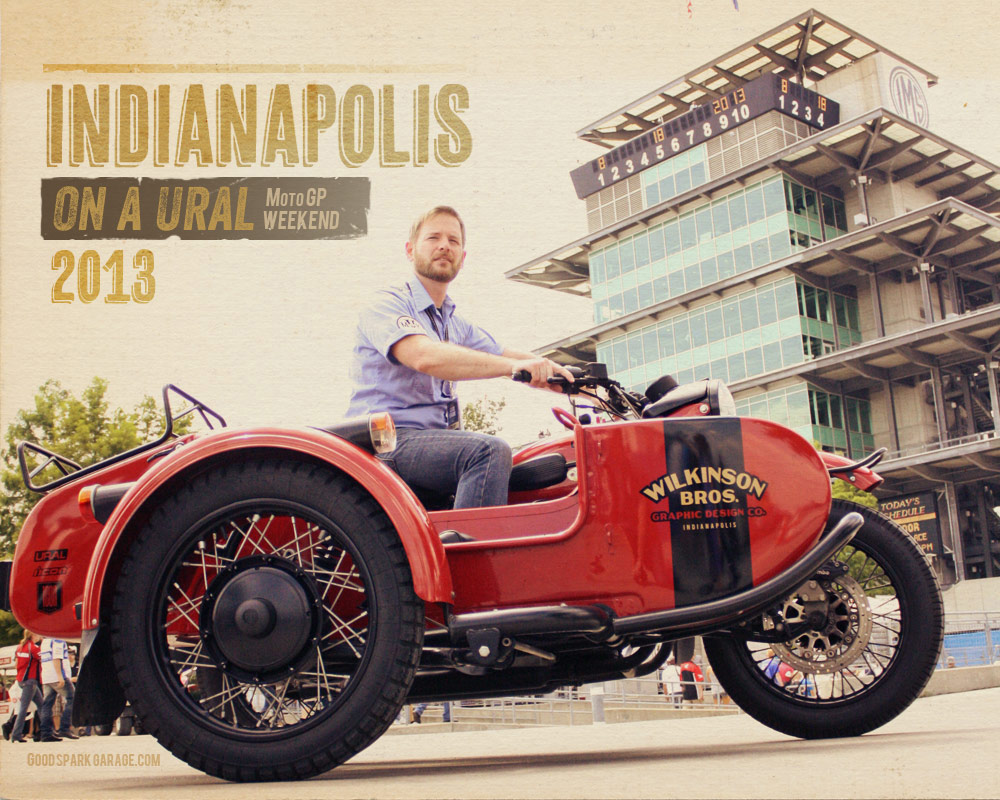 This article was originally posted on Ural’s blog: Darting around the Circle City on the Ural was a blast during the Red Bull Indianapolis GP weekend. You don’t need backwoods or mountains for an adventure, an urban setting will provide plenty challenges, dangers and varying scenery. Unlike an introspective off-road journey, the city provides an audience. Riding by bus stops and passing pedestrians, the Ural attracts many smiling and bewildered people. Others react to the red sidecar as if they had just spotted a unicycling clown. 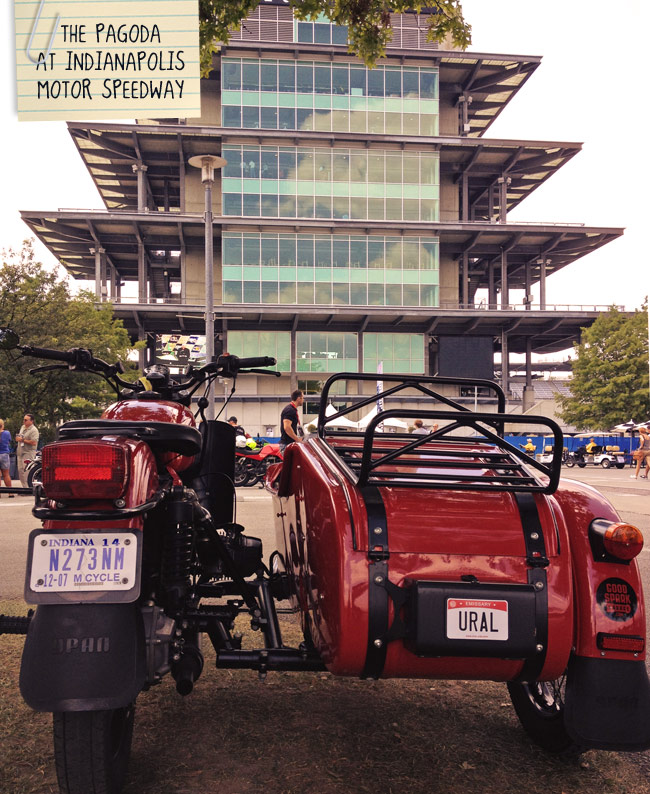 For three days, the sidecar carried all the provisions for the track. Putt-putting around the grounds of the historic Indianapolis Motor Speedway seemed fitting; there’s a lotta nostalgia in both the big oval and this brand of bike. I rolled right up to Pagoda Plaza, an open area in the shadow of the 153-foot tall iconic building that sits next to the start-finish line. The police and security personnel nod n’ wave; how could an “old” motorcycle sidecar be up to no good?

Once parked, folks gathered, asking the standard and understandable questions of “how old is it?” and “where’s it made?” When I say it’s a 2010, it’s usually repeated back to me in disbelief. One onlooker pointed out the Brembo disc brake, elbowed their buddy and said, “it’s a new one.” 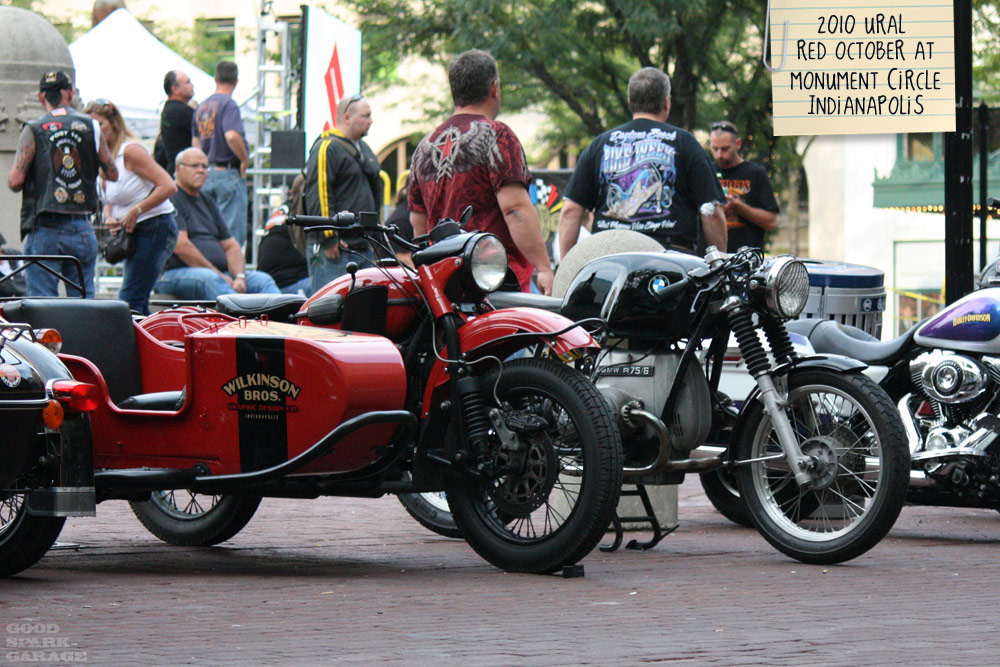 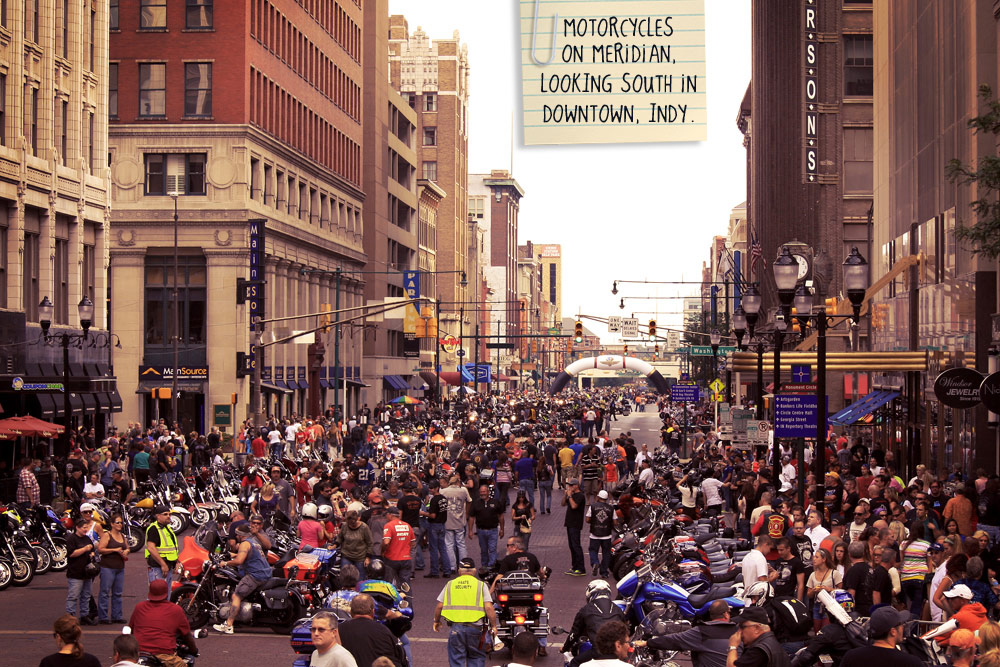 After leaving the speedway, I headed a short distance to Motorcycles on Meridian with my brother on his 1976 BMW. With well over 15,000 motorcycles lining the streets, this is Indy’s biggest bike gathering of the year. Motorcyclists mingle and cruise the beautiful Monument Circle till the wee hours. Over bricks and bumps and through crowded crosswalks, the Ural bounced along as I looked for a space for two. After spending the day plotting maneuvers around construction barrels and jockeying for position on exit ramps and turn lanes, I backed the Ural up to the 112-year old Soldiers and Sailors Monument for a rest. The tub and its trunk are perfect for stashing jackets and helmets and anything extra, should a warm evening turn cool.

“I need one of those for my bulldog!” was a comment among others heard even before my helmet came off. “Is it comfortable?” “It looks like an old military vehicle.” “That is bad—!” And other colorful observations were made. 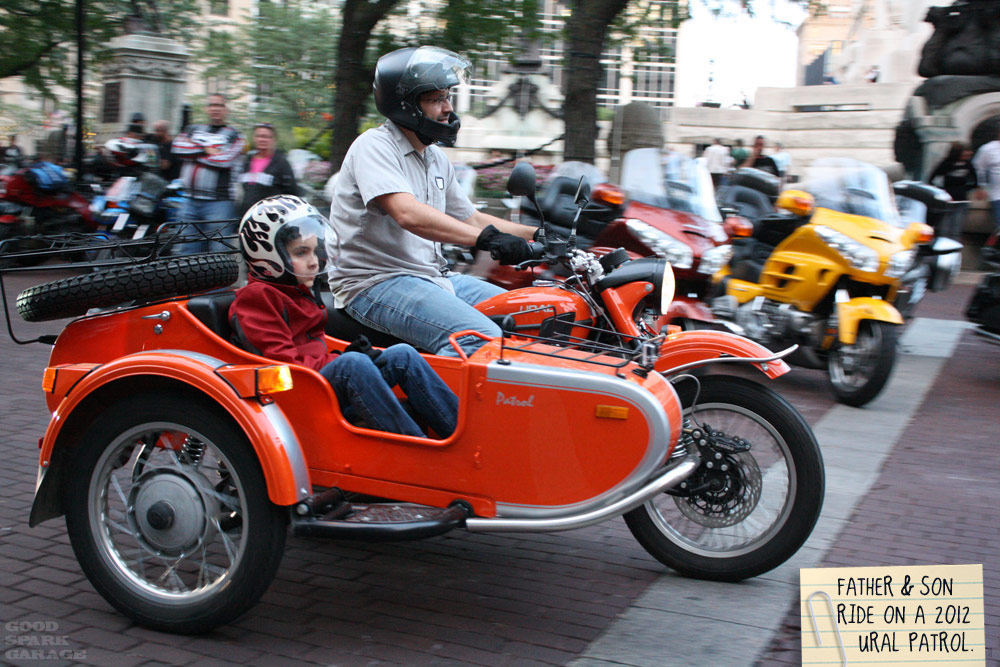 Right in the heart of downtown Indy, a concentrated parade of motorcycles spanned several city blocks. The folks at Indianapolis Motor Speedway helped secure a bike-only atmosphere that invited all-types of motorcyclists. To my surprise, it wasn’t long before another motorcycle sidecar cruised by; a father and son in an orange Patrol. Then another, a late model flat black “T.” We counted seven Urals including ours during Friday and Saturday night at Motorcycles on Meridian, which was enough for one passerby to say, when looking at mine, “there’s another one.” 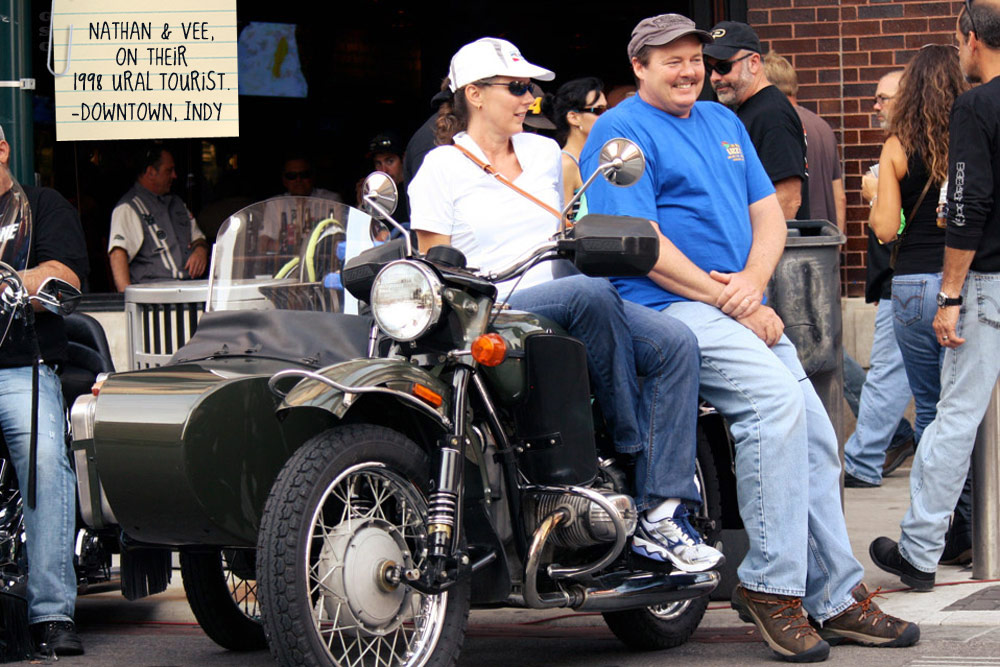 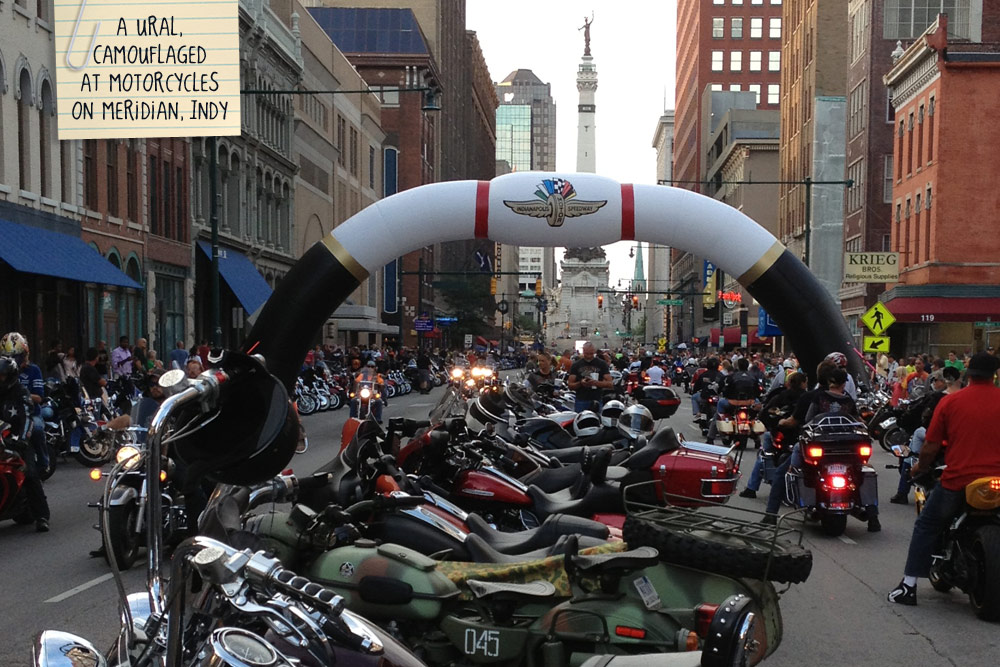 Even with glow lights, loud stereos and oversized polished wheels on the countless Big Twins and hoards of inline fours, the Russian three-wheelers stand out in the crowd. Maybe it’s the juxtaposition of their simple, whirring boxer engines against the open pipes and limiter-bouncing of the evening. Or maybe it’s the Ural’s funky-without-trying-to-be persona. Whatever it is, they’re great vehicles for fun in the city. My Ural quickly revealed itself as a machine that can make a kid and old-timer smile with equal enthusiasm. 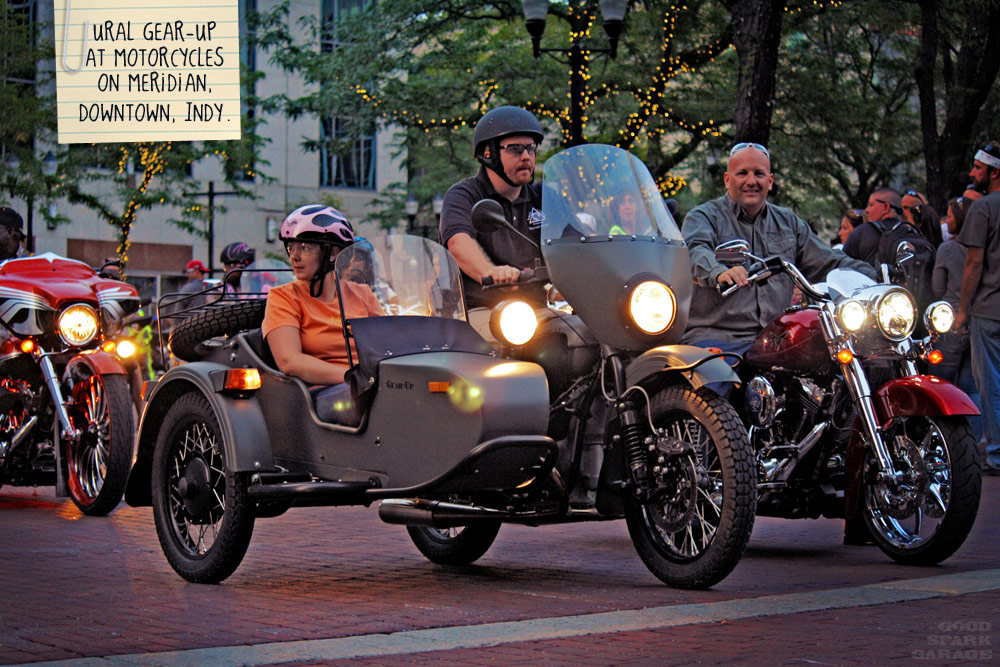 MotoGP and Motorcycles on Meridian will be returning to Indianapolis in 2014. Between those two events and the Indy Mile, it’s certainly an urban adventure to enjoy via sidecar…or any motorcycle. Take your spouse or your kid or your dog and soak up the sounds of motorcycles during a Midwestern summer. If you go, keep an eye out for a red Ural, I’ll be waving at ya.  –Corey at GSG 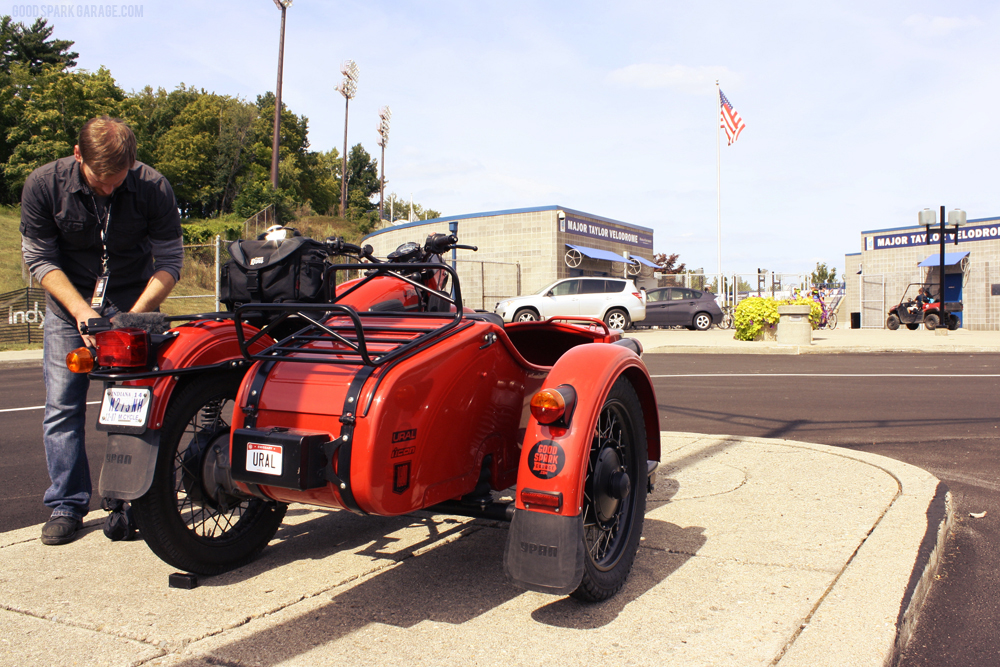 Festival of Machines at Conner Prairie

Over 6,000 people attended Festival of Machines at Conner Prairie, a weekend that celebrates unique modes…