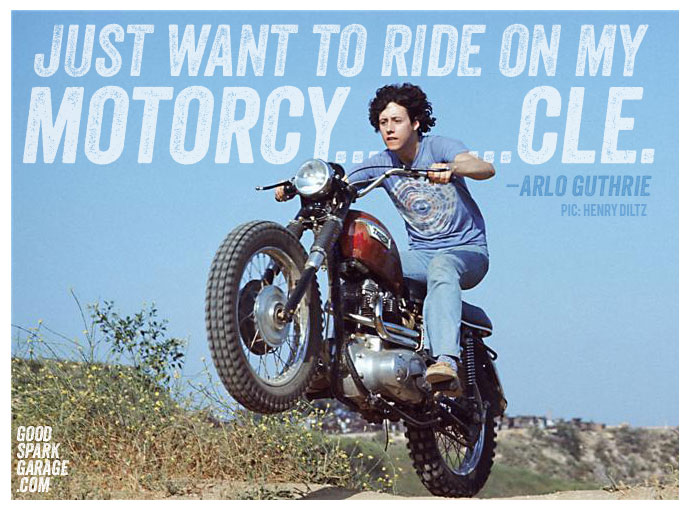 Sifting through the record collection here at Good Spark Garage, I came across Arlo Guthrie’s album, Running Down the Road. The image of him on his 1960’s Triumph scrambler prompted me to hum his iconic “Motorcycle Song.” So I pulled out the well-worn Alice’s Restaurant album where the motorsickle song resides. 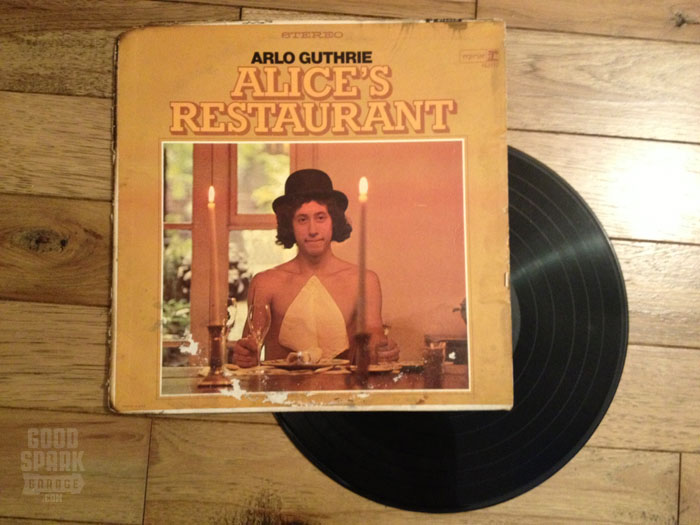 The track, “Alice’s Restaurant Masacree,” is by far Arlo’s most famous tune, but folks love the simple and nonsensical “Motorcycle Song” and how it has evolved over the years. While some were much heavier in their anti-draft, anti-war allusions, he had a way of entertainingly smile-talking and creatively exaggerating through his narrative songs.

Alice was released in October 1967, the year his father and legendary folk singer, Woody, died. Arlo carried on the tradition of writing/performing songs of protest and odes to Americana. After the success of the album, he was pulled into the spotlight while grieving his father’s lost battle with Huntington’s Disease. I have to wonder if motorcycles were used for escape, or to clear his mind when things got heavy. 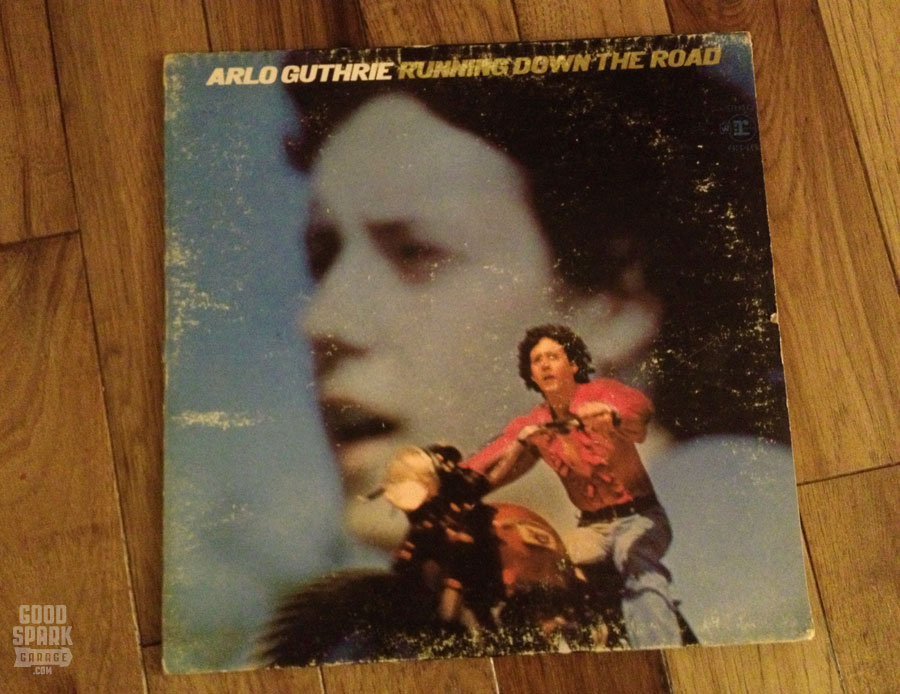 Running Down the Road was released in 1969. Its album cover featured Arlo on the front, back and inside spread, riding what looks like a mid-to-late 60s Triumph TR-6 Scrambler (aka, a 650cc Trophy). ATGATT fanatics may question his lack of safety apparel, but his tie-dyed tee and pink ruffled shirt make for good pics. He actually looks pretty comfortable on the big British twin. The photos were taken by Henry Diltz, the official Woodstock photographer whose work can be found on more than 80 record album covers.

The album features Arlo’s version of the 1920’s American folk song, “Stealin’,” which can be heard in the 70s street-racing movie Two-Lane Blacktop. It also features “Coming into Los Angeles,” a song that has been described as a dope-smuggling anthem (he performed this song at Woodstock). Paying homage to his roots, he put his spin on his Dad’s “Oklahoma Hills,” beautifully accompanied by one of the best guitarists in the biz, Ry Cooder.

A couple years before Running Down the Road, the “Motorcycle Song” revealed Arlo’s early leanings toward motorcycles. It also made many people scratch their heads. Here’s a live performance at a benefit festival in the fall of 1975, where he ad-libs and expands on the story that has stuck in the minds of motorcyclists and non-motorcyclists for decades.

Read the original lyrics below:

The Motorcycle Song.
Words and music by Arlo Guthrie.

I don’t want a pickle

Just want to ride on my motorsickle

And I don’t want a tickle

‘Cause I’d rather ride on my motorsickle

And I don’t want to die

Just want to ride on my motorcy…cle

It was late last night the other day

I thought I’d go up and see Ray

So l went up and I saw Ray

There was only one thing Ray could say, was:

This song is about the time that I was ridin’ my motorcycle.

Going down a mountain road, at 150 miles an hour, playin’

my guitar. On one side of the mountain road there was a

mountain, and on the other side there was nothin’ – there was

a cliff in the air.

Now, when you’re going down a mountain road at I50 miles

an hour you gotta be very careful, especially if you’re playin’

a guitar. Especially if that guitar is an acoustic guitar.

Because if it’s an acoustic guitar, the wind pressure is greater

on the box side than on the neck side, because there’s

more guitar on the box side. I wasn’t payin’ attention ..

Luckily I didn’t go into the mountain – I went over the cliff.

at the same time.

I knew it was the end. I looked down, I said ”Wow! Some

trip, and in my last remaining seconds in world,I decided

to write one last farewell song to the world.

Put a new ink cartridge in my pen. Took out a piece of paper.

I sat back and I thought awhile. Then I started writin’:

I don’t want a pickle

Just want to ride on my motorsickle

And I don’t want a tickle

‘Cause I’d rather ride on my motorsickle

And I don’t want to die

Just want to ride on my motorcy …cle.”

I knew that, it wasn’t the best song l ever wrote, but I didn’t

have time to change it. I was comin’ down mighty fast.

But as you all know, and as fate would have it, I didn’t die. I

landed on the top of a police car. And he died. I drove away

on the road that he was on. I came into town at a screamin’

I came into town, I jumped off my bike, the bike went around

I walked over to my friend. He was standin’ there eatin’

pickles. I said “Hi, what’s happenin’?” He looked at me in the

You gotta sing it with that kind of enthusiasm. Like you just

For the later release that includes an addendum to the song, click here to learn about the “Significance of the Pickle.”

The buzz begins early on social media and, on the weekend of the Mama Tried Motorcycle…